Ten years ago, Lauren Mozer moved back to Toronto from Montreal, where she had been studying at McGill. While she was there, she met her future fiancé, Owen Garscadden, and also decided that sociology wasn’t for her—she wanted to be a chef. She enrolled in George Brown’s culinary program, and to make some money she started cooking for her parents’ friends. In 2011 she got serious about being a private chef. Mozer started a website, became a one-woman PR team and nabbed her first client. Today, Elle Cuisine is a catering behemoth: Mozer has 30 full-time employees, as well as almost 250 contract staff that she brings on for big events. Just last week she catered an 800-person party for Ubisoft. When she’s not catering corporate event, Mozer’s putting on hoity-toity dinner parties. These days, she’s no longer cooking for family friends, but for deep-pocketed Bridle Path residents.

“The transition from executive chef to CEO has been hard. It kills a part of my heart not to be in the kitchen every day, but it’s also been a huge growing opportunity,” says Mozer, who still works 70-hour weeks. “I often joke that Owen is dating me and Elle Cuisine.” she says. They’re both workaholics (he’s in advertising), but their schedules are getting more manageable. As CEO, Mozer now gets the odd weekend off, which she’s happy about.

On a rare Saturday off, Mozer and Garscadden will sleep in—they’re both husks by the end of the week. Then, Mozer will make brunch. The two love Lady Marmalade, but Mozer hates waiting in lines, so she’ll make a knockoff of the restaurant’s brie-and-avocado Benny for herself and a classic Benedict with peameal, bacon and eggs for Garscadden. Then they’ll go lounge in their Leslieville backyard before making a pilgrimage to a patio (usually the Price Street Terroni or Yorkville’s Cafe Nervosa) to meet up with friends. If they’re still peckish after an afternoon of cocktails, they’ll order in some pizza—typically Pizza Nova or Pizzaiolo. When it comes to delivery pizza, Mozer says she doesn’t think gourmet pies hold up during transport.

During the week, Mozer starts each day with a cappuccino at 7:30 a.m. before delving into her e-mails. She’ll usually respond to at least 80 before heading to her catering HQ a couple hours later. Once there, she’ll whip up a quick breakfast (avocado and eggs on toast, typically), then it’s meeting after meeting until lunch. At Elle Cuisine, each chef takes their turn prepping the staff meal. Recently, Mozer enjoyed a pizza day when her pastry team was perfecting their sourdough pie base. By the time Mozer gets home around 9 p.m., she’s beat, so UberEats has become her own personal caterer. However, if she and Garscadden are up for it, they might walk over to either Goods and Provisions or Ascari Enoteca, their two neighbourhood stalwarts, for a no-fuss date night.

When it comes to groceries, Mozer doesn’t exactly go shopping. “When I’m hosting a dinner party—which is about three times a month—I’ll just order from my suppliers. It lets me piggyback off wholesale costing, plus they’re already my favourite preferred products,” she admits, before adding that for odds and sods, she’ll hit up Rowe Farms or Farm Boy. Mozer’s suppliers include The Butcher Shoppe, Cheese Boutique, Rodney’s and City Fish. 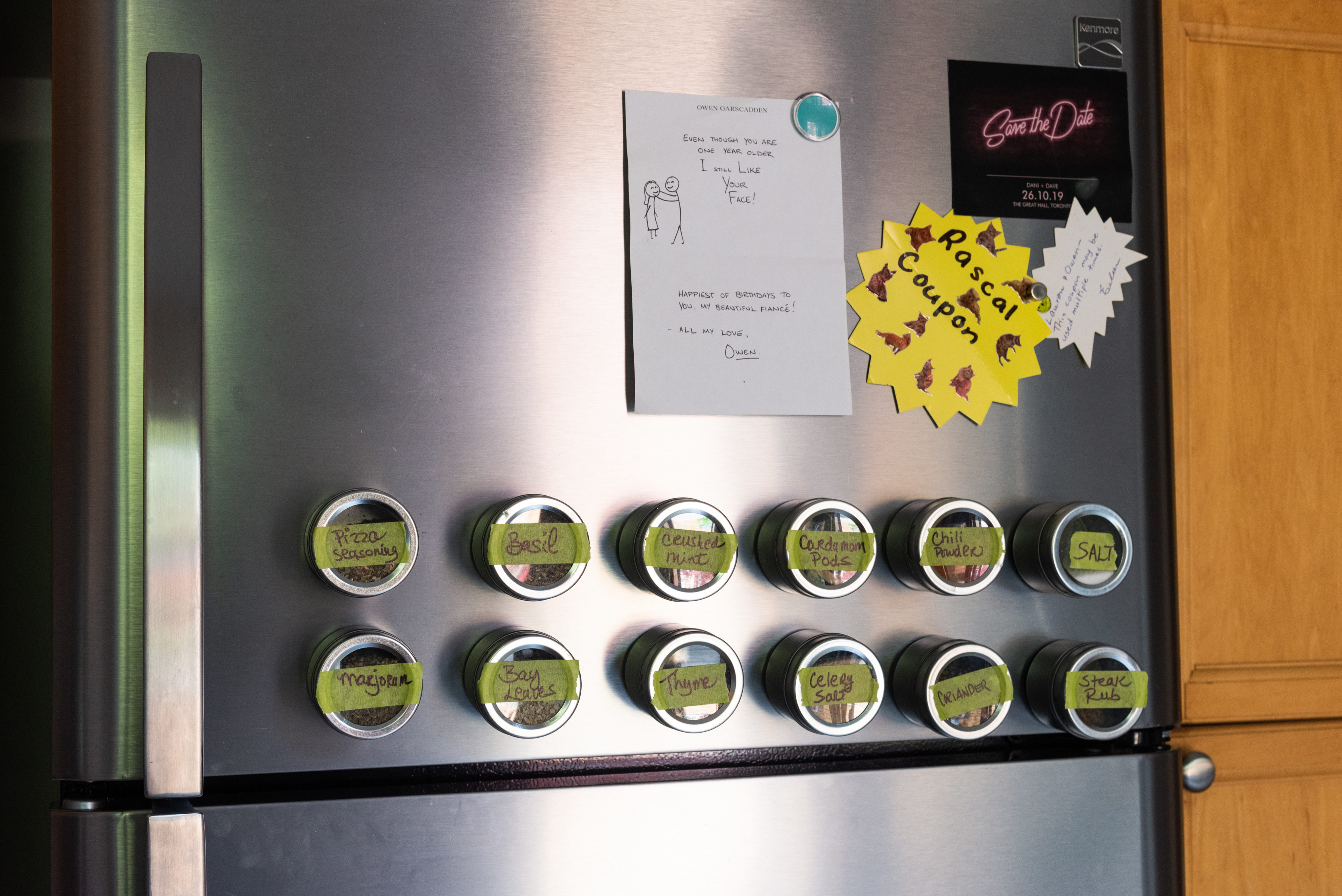 Mozer and Garscadden love their Leslieville home, but Mozer absolutely hates the kitchen. She’s looking forward to gutting it and starting from scratch. Her dream kitchen has tons of storage, miles of counter space, and opens into the dining room so she can simultaneously cook and entertain. She also looks forward to buying lots of high-end kitchen toys: she wants to eventually have two ovens and a stove with a pot filler. “I work in so many outrageously gorgeous homes and every week I see a new dream kitchen I’m inspired by,” says Mozer, who hopes to finally tackle her kitchen in the next year.

The busy couple always make time for friends when they can. They’ve been having a lot of impromptu weeknight wine-and-cheese gatherings lately. Mozer often has tons of leftover charcuterie from events, so they’ll throw together a platter like this one: 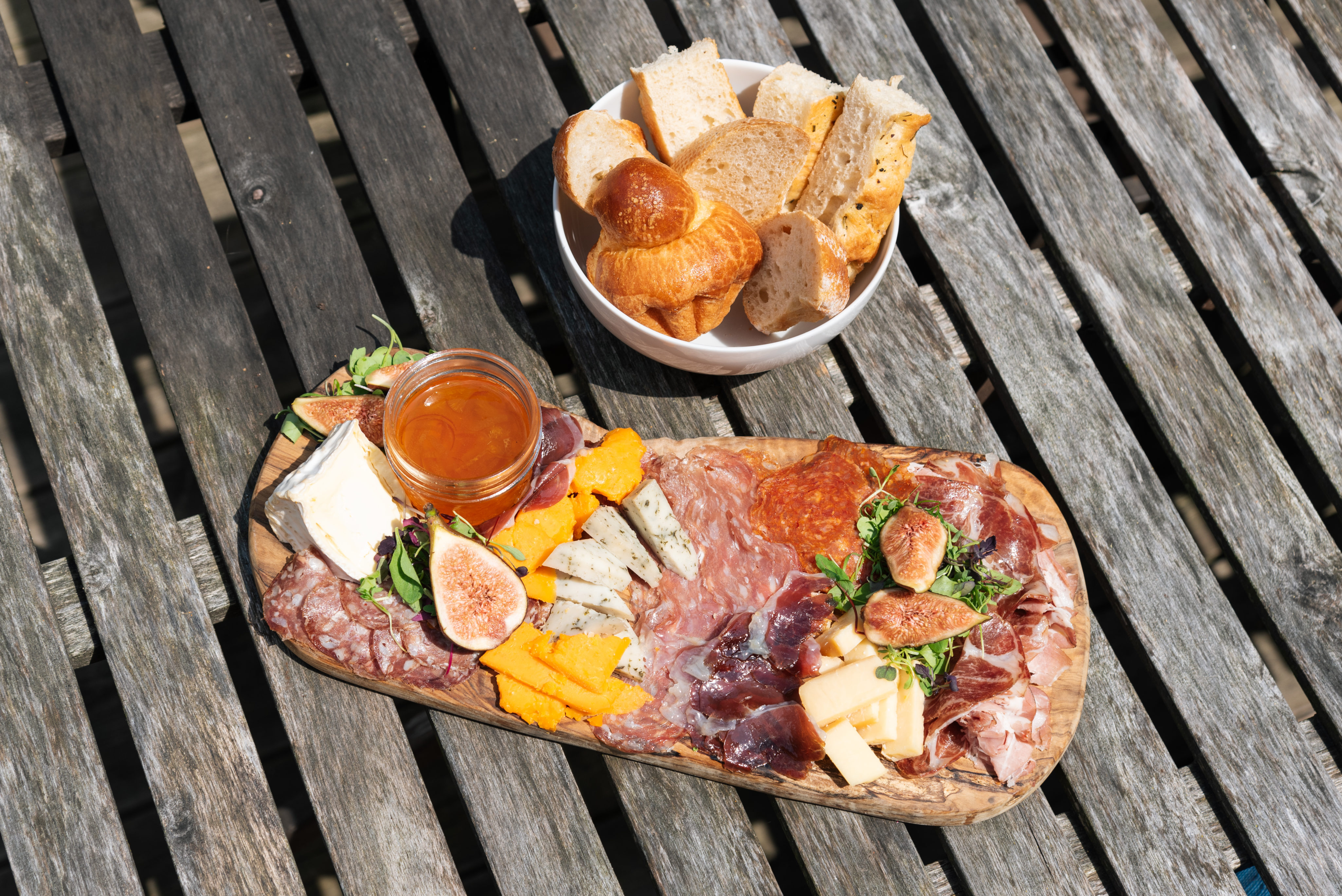 Mozer has been in the kitchen since she was 12. Her mother didn’t exactly love cooking, and Mozer was tired of eating Kraft Dinner and frozen meals, so she asked her mom if she could take over. Although Mozer’s mom wasn’t much of a chef, she knew a few key books were fundamental to forging a mini chef: the Larousse Gastronomique and Joy of Cooking were Mozer’s first cookbooks, hand-me-downs from her mom.

Mozer only buys her knives from KNIFE on Dundas West. She’s actually become the lead character in one of owner Eugene Ong’s cautionary tales. At a wedding Mozer was catering, the couple needed a knife to cut their cake, so she gave them one of her expensive Japanese knives. The blade was promptly forgotten and thrown in a bin with a bunch of dishes and cleaning products. One of the detergents spilled on the knife, corroding the blade and rendering the expensive piece of steel pretty much useless. Now Mozer brings a cheap knife just in case someone needs to cut some cake:

They both loves drinking cocktails, but Garscadden is the liquor collector, curator and keener. Here’s his bar cart:

There are more than four dozen different bottles in this liquor cabinet. Here are a few of Garscadden’s favourites:

And here are some of their favourite bottles of wine:

When Garscadden’s grandmother passed away, the only thing he took as a memento was this bottle of tequila which lived on her bar cart for as long as he could remember. He thinks the label, and the fact that there’s a worm in the bottle, is a bit bonkers. “I’ll probably never open this,” he says about the keepsake: 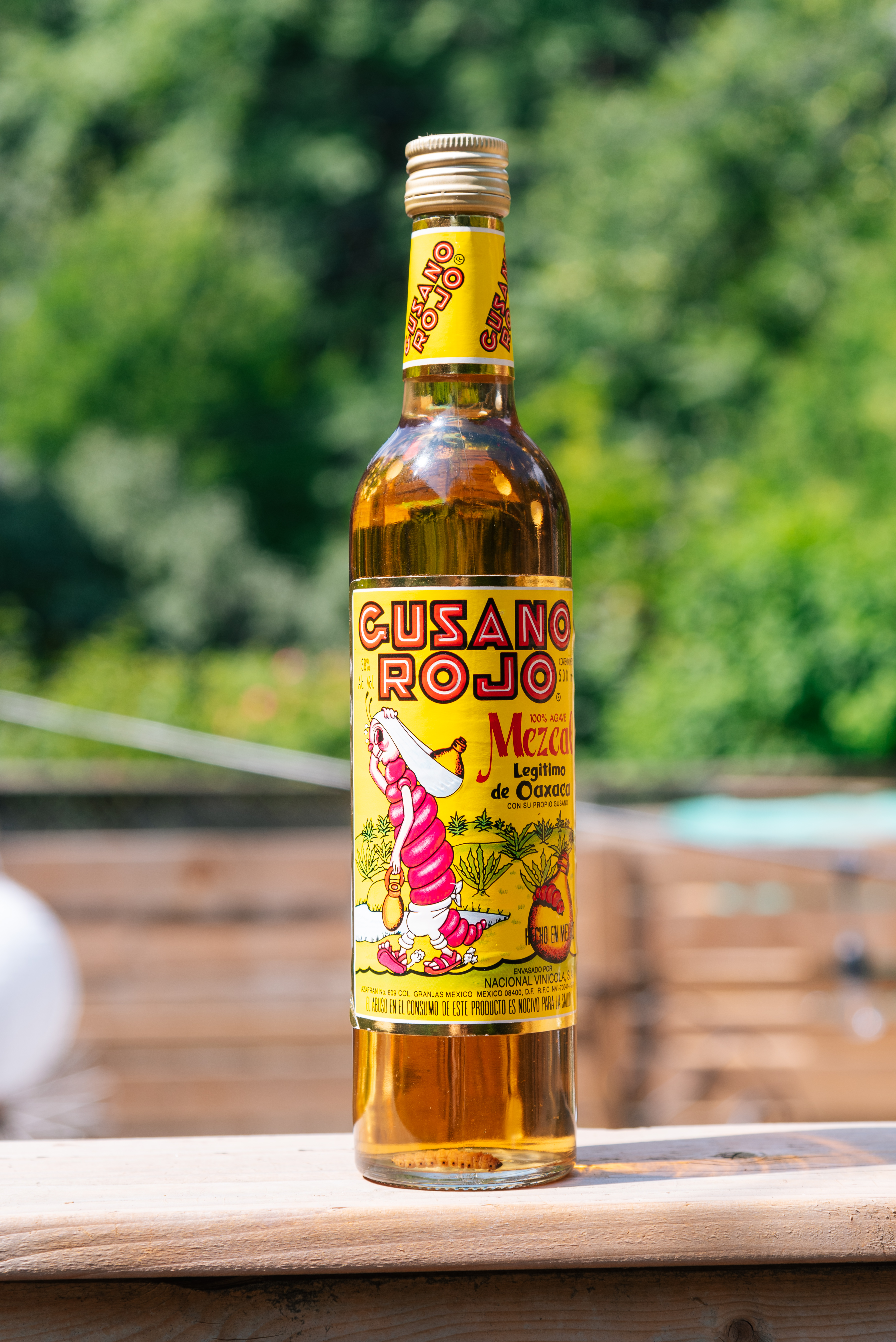 Last Christmas, Mozer gave her husband a typewriter. In return, he gave her this EasyBake Oven. She had the same one as a kid: 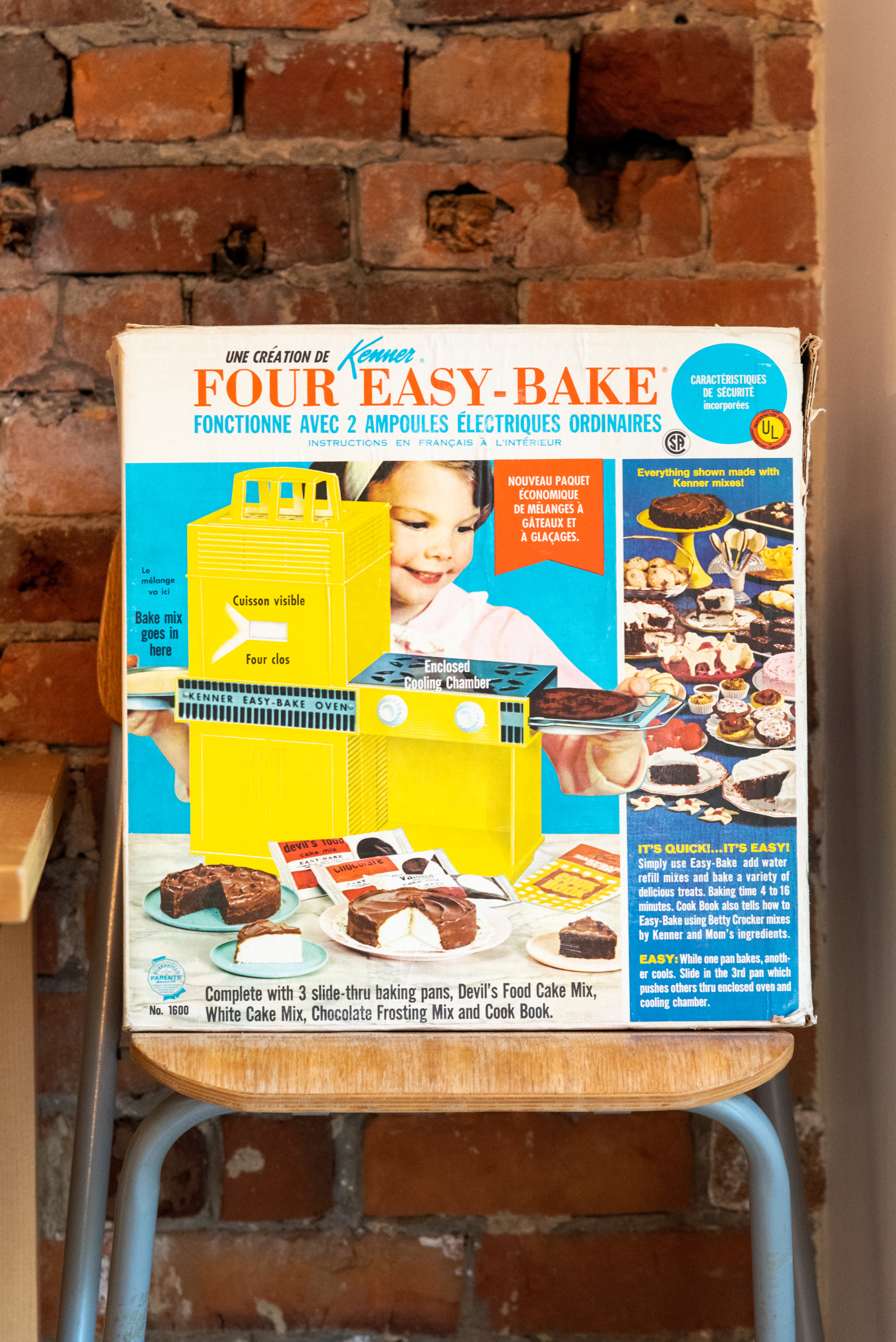 Thanks for having us, Lauren! 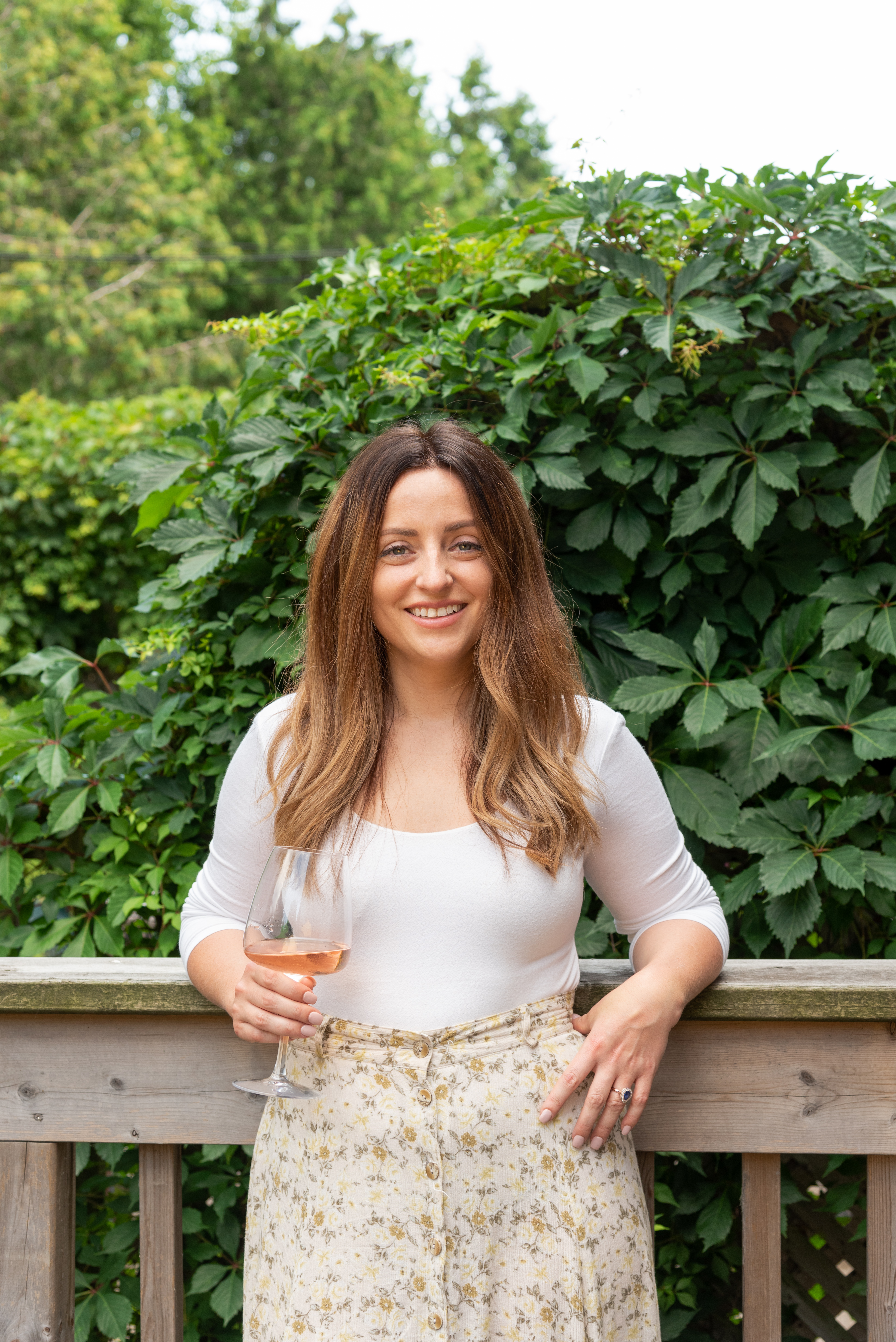