We’re going on the road with some of the city’s top chefs, restaurateurs and foodies, to explore their favourite restaurants. Mark Furukawa, the owner of Hamilton record shop Dr. Disc, tells us what’s good in his hometown

Mark Furukawa, owner of the Dr. Disc vinyl shop in downtown Hamilton, has called the port city home for the last 27 years. “I was born in Toronto, grew up in Barrie and worked in London. But my love for vinyl brought me to Hamilton, and this city adopted me,” he says. Furukawa worked at the original Dr. Disc store in London, before moving to Hamilton to help open a second store. Eventually in the late ’90s, he ended up buying the business from the owner. Today his shop boasts one of the largest collections of vinyl in the Golden Horseshoe.

Because his shop is conveniently located in the city’s quickly gentrifying core, Furukawa has witnessed Hamilton’s culinary boom first hand. “There was a groundswell in the arts community, with plenty of creative types hosting events and festivals,” he says. “That paved the way for a boom in our culinary scene in the last five years.” Hamilton’s rise has been swift and sprawling with a number of third-wave coffee bars, microbreweries, and restaurants of all shapes setting up in various neighbourhoods. Furukawa has seen the strip of James Street North change drastically in the last few years alone.

“There is a cross-pollination of young professionals from Hamilton, and young professionals that moved from Toronto. They’re adventure seekers; creative types and open-minded, culinary speaking. It has really changed the demographics in parts of the city, and it’s driving this forward-thinking spirit,” says Furukawa. “We used to be in the shadows of Toronto, but now we’re coming into our own. I am happy to celebrate Hamilton’s coming of age.”

Hamilton is home to a large Portuguese population, and this Portuguese bakery has been a part of the city for decades. “The trendy cafes and restaurants moved in around Ola,” says Furukawa. “But this place has always stood its ground.” Furukawa was introduced to Ola when he first moved to Hamilton, and he’s been visiting regularly since for the café’s old-school charm and baked goods.

Go-to item #1: Custard tarts.
Tasting notes: Ola’s tarts are not as sweet as usual, and that’s a big bonus for Furukawa. “I love the custardy texture and the fact that the sugar isn’t overpowering. Day or night, it’s a nice little treat to have.”

Go-to item #3: Flan.
Tasting notes: If Furukawa is feeling extra indulgent, he’ll have a slice of caramel flan, the classic Portuguese pudding made with plenty of egg yolks and milk. “Ola makes the best flan in Hamilton,” says Furukawa.

According to Furukawa, Hamilton’s coffee scene offers something for everyone. “Whether you want a quick grab-and-go without compromising quality, or if you enjoy French press with a view, we have options we didn’t have even a few years ago,” Furukawa says. His favourite spot is a small coffee pocket located a block from his record shop.

Go-to item #1: Americano.
Tasting notes: Smalls coffee gets their beans from Detour Coffee, and Furukawa is currently digging a Costa Rican single blend. “I bought a 5-pound bag of it the other day,” says Furukawa.

Furukawa is a big fan of this bakery that recently opened on Locke Street, but started as a pop-up three years ago. “They were renting kitchen space and delivering to various cafes across the city,” says Furukawa. “The demand was so great, they decided to open their own location.”

Furukawa noticed this new patisserie when it opened a few months ago. “It’s next to my favourite lunch spot in Hamilton, but I didn’t go in at first because it didn’t look that appealing.” But after hearing about the bakery’s croissants from colleagues, he ventured in for a taste test. “It’s owned by an Algerian newcomer who happens to be an incredible baker,” says Furukawa.

Go-to item #1: Plain or chocolate croissants.
Tasting notes: Furukawa swears by the fluffy, buttery croissants with perfectly crispy exteriors. His personal favourite is the chocolate, with chunks of semi-melted chocolate inside the crisp shell. “It has a rich chocolate flavour without being sickly sweet,” he says.

Go-to item #2: Mint tea.
Tasting notes: Furukawa likes to wash down his pastry with some Arabic tea. “When I’m not feeling like something sweet, I have a plain croissant and a glass of this tea,” he says. “I find it very soothing.”

Furukawa does all of his grocery shopping at the nearby Nations Foods, which is conveniently located just a few blocks from his shop and home. “Nations is a catch-all for everything,” Furukawa says. “It has a great selection of produce, and it carries all of the imported ingredients I need when I’m making something special.”

Go-to item #1: Packaged noodles.
Tasting notes: Furukawa stops by regularly to stock up on packaged noodles for homemade soups. “I make my own ramen and other soups, and these noodles are perfect for that,” he says.

Go-to item #2: Coconut milk.
Tasting notes: “Coconut milk is a key ingredient to most of the Southeast-Asian dishes I make, and Nations has the best selection of both coconut milk and coconut cream,” Furukawa says.

Furukawa has become a regular at this newly opened Cantonese noodle shop that features house-made, hand-pulled noodles in soups and fried dishes. “There’s a young energy and attitude about this place, and all of the food is fantastic,” he says.

Go-to item #1: House noodle soup.
Tasting notes: Furukawa praises the stock at Noodle Me, and his favourite bowl of soup comes with braised brisket. “The texture of the meat is just right; it comes apart so easily in your mouth,” he says.

Go-to item #2: Lamb kebab.
Tasting notes: “This is a regional dish that kind of reminds me of Indian cooking because of its spices,” Furukawa says of the Shanxi-style barbecued lamb skewers. If you’re a fan of cumin and chili-spiced meat, this is the dish to get.

Go-to item #3: Side dishes.
Tasting notes: Furukawa suggests that you don’t skip out on the side dishes here. “My favourites are the cold shredded potato with garlic, and the silky rice noodles with cucumber,” he says. “The fried tofu in hoisin sauce is also good, though.” 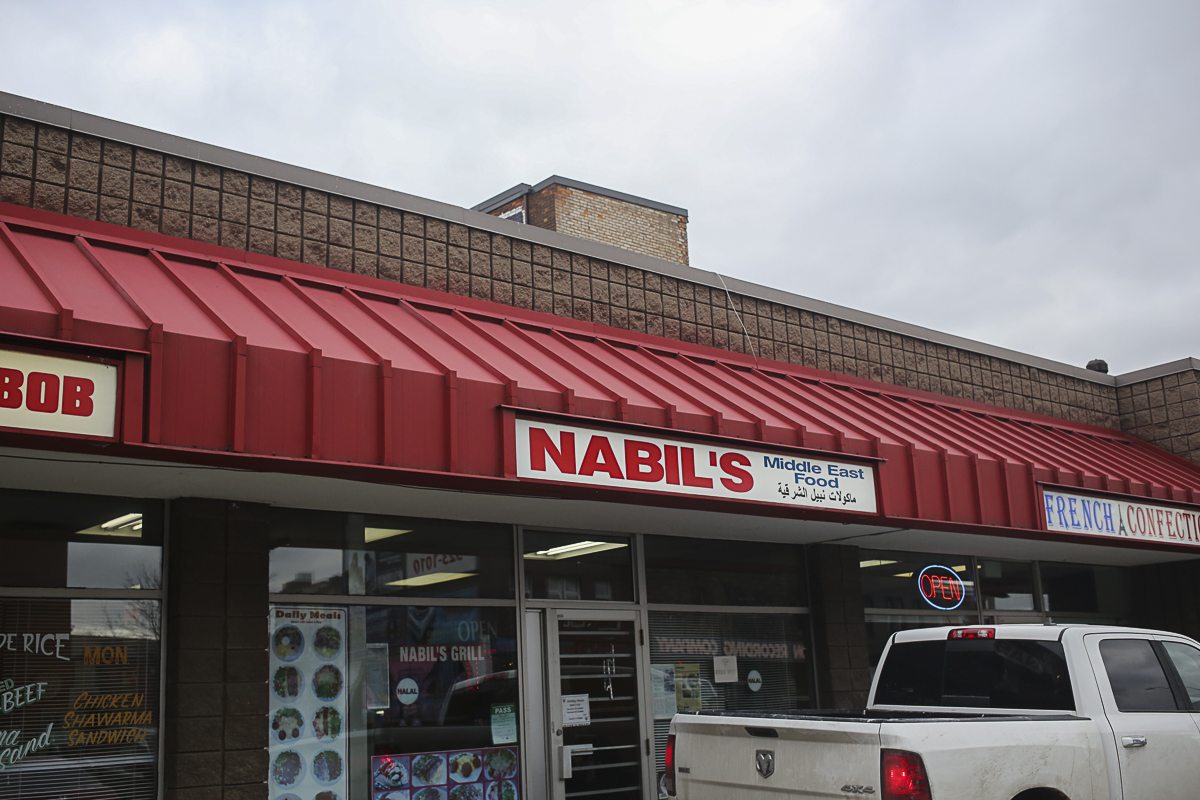 Hamilton is home to a number of shawarma joints, specializing in Lebanese and Syrian-style shawarma. Furukawa’s favourite is Nabil’s, and he’s been visiting it since it opened in 2001. “I was here on the first day for lunch, and I’ve been coming weekly since,” he says. “Nabil and his wife, Widad, are like my extended family.”

Go-to item #1: Falafel plate.
Tasting notes: “The falafel here is freshly made-to-order. That’s a big bonus for me,” Furukawa says of the house falafel, which comes on a bed of hummus and tabbouleh.

Go-to item #2: Mixed shawarma with biryani.
Tasting notes: One of the unique dishes at Nabil’s is their spiced rice, which is similar to its Persian and Indian biryani cousins. Furukawa suggests you order the biryani and top it with the mixed beef and chicken shawarma. “The raisins and almonds are a must, they really complete the dish,” he says.

Fuelled by the craft beer boom and access to affordable industrial spaces, six breweries have opened in the city of Hamilton in the last year alone. One of the most popular is Merit, conveniently located on the St. James North’s restaurant row. When Furukawa wants meet up with friends, this is where he goes. Friend, and fellow Hamilton foodie and food tour operator Sid Friedman joined us at Merit. 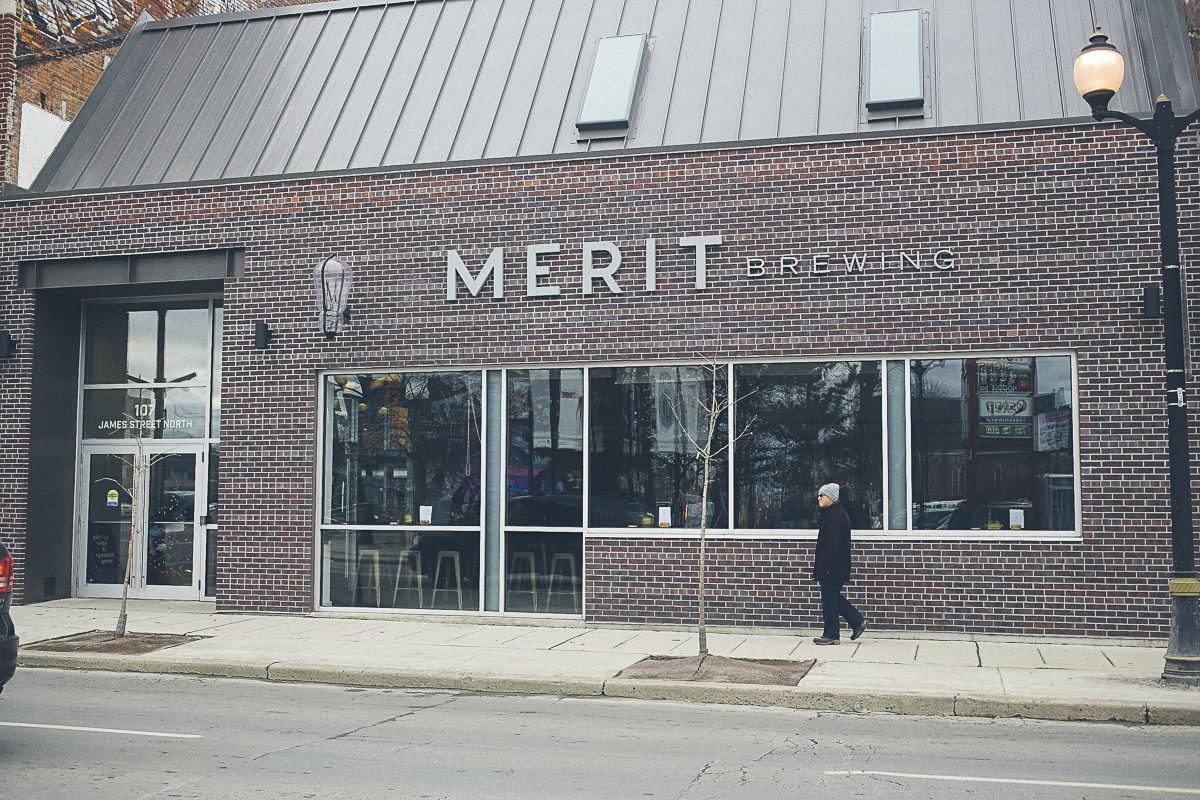 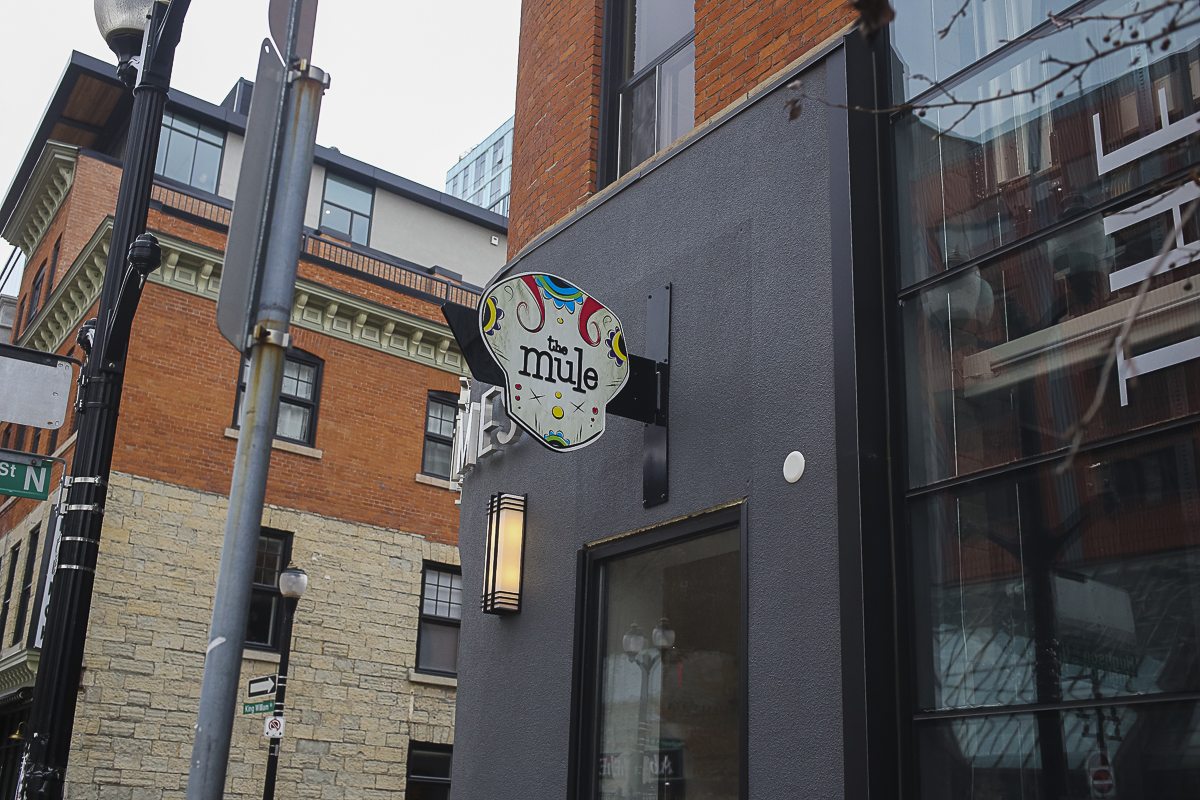 When Furukawa isn’t in his shop or taking out-of-towners to new cafes and restaurants, he’s deejaying. For the last three years, he’s called The Mule, a Mexican restaurant in downtown Hamilton, his weekend residency. And when he’s craving a good taco, or a casual night out with cocktails, The Mule is his go-to place. “The vibe is emblematic of what Hamilton is right now: young, hip and very friendly,” says Furukawa.

Go-to item #1: Tacos.
Tasting notes: The pork belly banh mi and fried halloumi tacos are standouts. “I am a big fan of the Brussels sprouts taco,” says Furukawa. “It’s so crunchy and flavouful.”

When Furukawa wants something a bit more refined, he heads to one of his favourite restaurants for modern French bistro fare. “I love the space here; its casual but refined,” he says. “It’s perfect for a date, or a special dinner.”

Go-to item #1: Trout almondine.
Tasting notes: Furukawa’s favourite dish is the seared trout served with fingerlings and green beans. “What seals the deal for me are the crunchy crushed almonds.”

Go-to item #2: Ricotta gnochi.
Tasting notes: “This is my backup dish,” says Furukawa. “The gnocchi is so soft it’s almost pillow-like, and its one-two parmesan and truffle oil punch really makes it luxurious.” 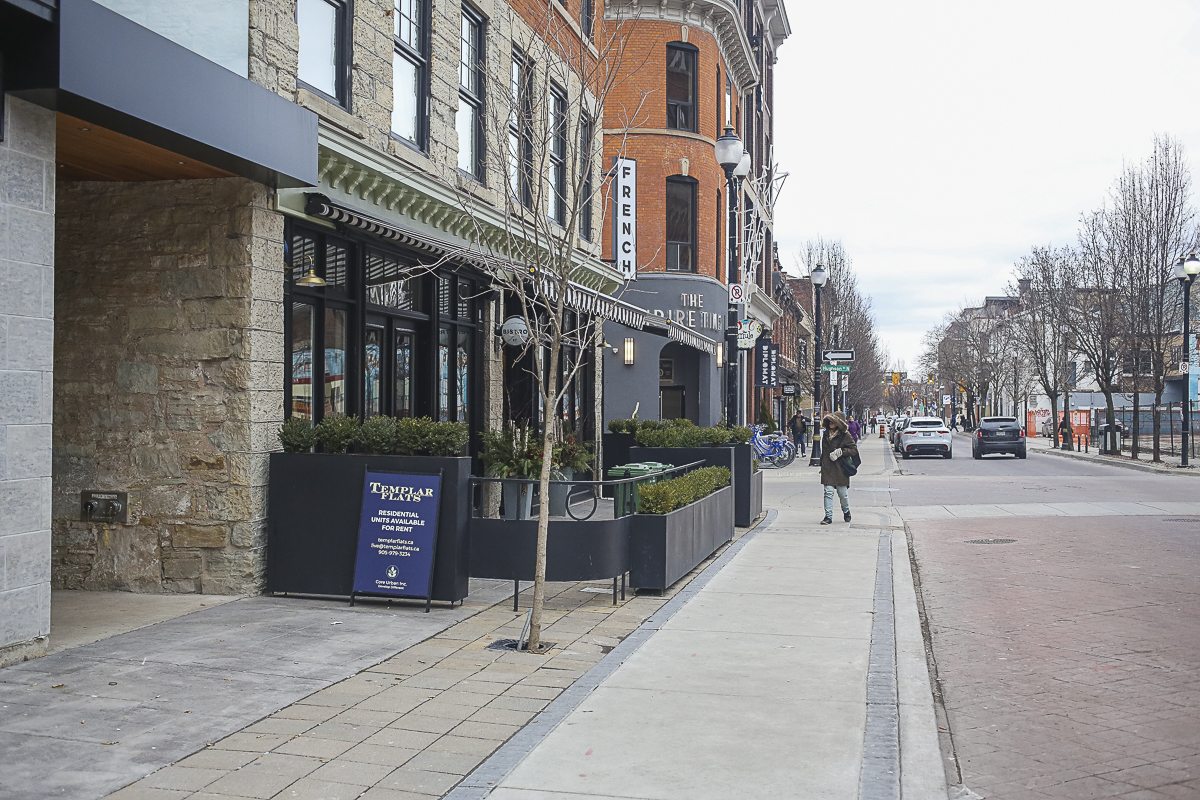 “The Hamilton Farmers’ Market has played a crucial role in how the city’s food scene has blossomed,” Furukawa says of the sprawling market. It sits at the edge of restaurant row and has been the breeding ground for many pop-ups over the last few years. One of Furukawa’s favourites is this small-batch ice cream producer. Owner Karen Burson uses organic milk and ingredients for her ice creams and sorbets. 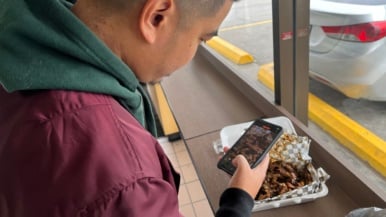