Behind the Vine at Mezzacorona

Behind the Vine at Mezzacorona

What is the origin of the wine you drink? Many North Americans have rarely pondered this question, let alone been exposed to the history behind the grapes in their glass. Lucio Matricardi, head winemaker at Mezzacorona wine in Trentino, Italy, is on a mission to change this.

During Matricardi’s recent trip to Toronto, he paid a visit to the idyllic Royal Canadian Yacht Club (RCYC), surrounded by white sails dotting the lake and boasting an impeccable view of the city skyline. Matricardi’s deep passion for wine is immediately evident as we sit down with cold glasses of crisp Mezzacorona, the pinot grigio that I will soon learn constitutes his life’s work and fuels his community’s way of life. 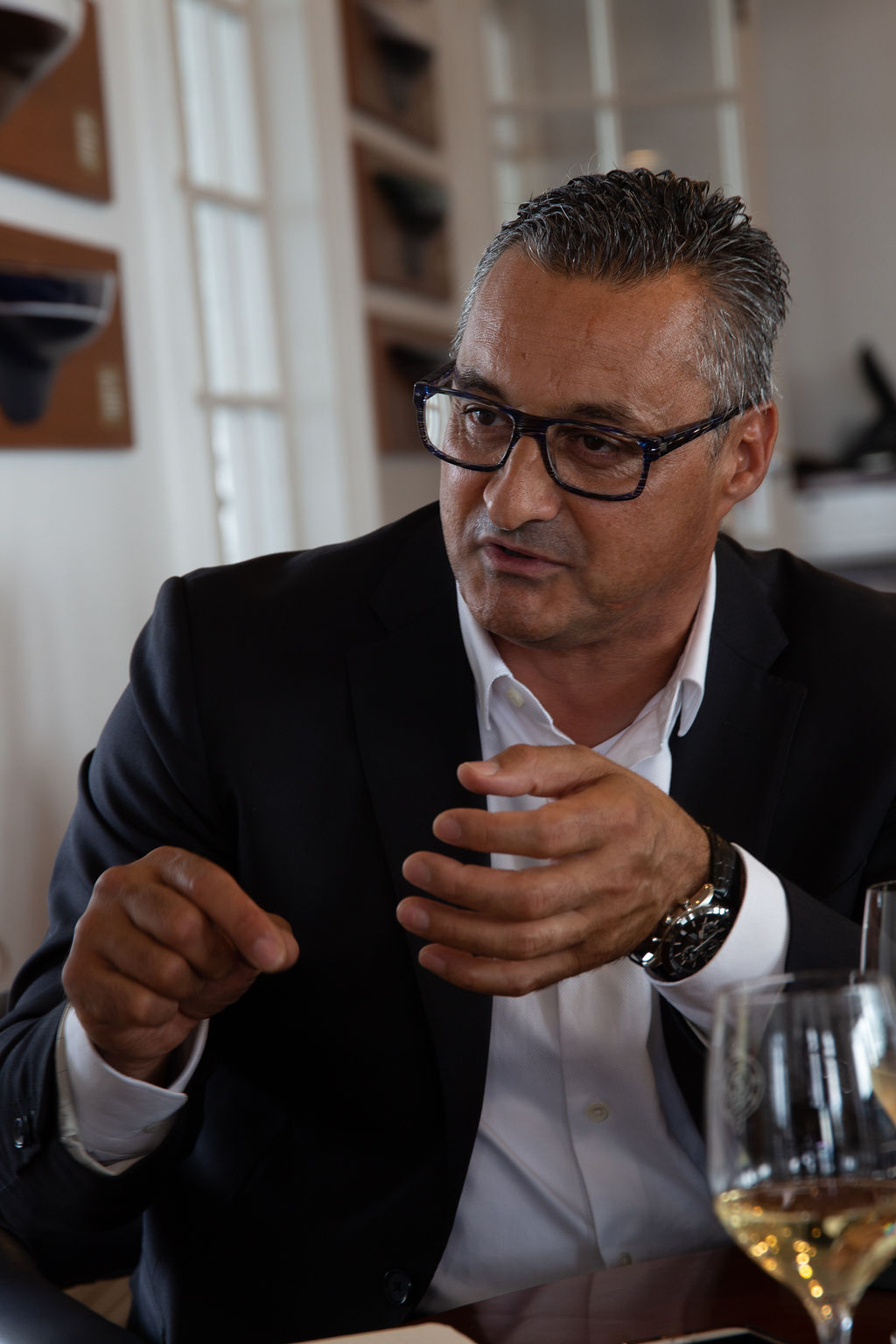 “Italian people get into wine in a very simple way,” Matricardi begins in his rich Italian accent. “We start to drink wine at a very young age. It is a component of my blood.” Reminiscing on his childhood in the Italian countryside, he recalls his parents favouring the grounds of their vineyard over a baby seat. Spending the earliest years of his life immersed in the grape-growing world makes it seem almost inevitable that Matricardi went on to acquire an agricultural science degree from University of Bologna, followed by journeys to both Australia and Tuscany to study winemaking, where he earned his PhD in viticulture and enology from the University of California at Davis with a focus on barrique and oak aging. Matricardi was acutely aware that his father’s hard work and dedication are what allowed him to choose the “pen over the plow,” as he puts it, and he felt a duty to clutch on to these opportunities with gratitude.

Although Matricardi soon found himself in the vineyards of Mezzacorona, the community’s story began long before his arrival. Beginning in 1904, the small community of families tucked between the mountains each used the few acres of vineyard land they possessed for livelihood. After realizing their weakness in independent operation, they eventually decided to amalgamate into one large producer. Today, Mezzacorona is owned by an astounding 1,600 families—all of whom reap the fruits of their labour. This sense of community is one of the many reasons that drew Matricardi to the vineyard.

“Every wine has its own identity, its own aroma,” Matricardi explains. “The world is the way it is because everyone speaks different languages, different dialects, and wine is the same.” At Mezzacorona, the primary aroma (or “identity”) of the grape variety is emphasized, as Matricardi believes wholeheartedly in the simple concept of matching the wine variety to its growing environment. He speaks proudly of the unique dolomite rocks and cool mountain air of Trentino, both of which provide an ideal alpine climate for their slow-ripened grapes (where most pinot grigio grapes must be picked earlier to prevent potential spoilage from heat). One sip of Mezzacorona bursts with the juicy flavours of melon and pear, and the crisp, luscious mouthfeel renders it distinct from your typical pinot profile, which tends to be categorized as “neutral”—a term that Matricardi clearly dislikes. He prefers that consumers acknowledge the possible variations in intensity and ripeness that pinot grigio can offer.

Flavour profile, though critical, is not Matricardi’s only goal as head winemaker. Arguably more imperative is making certain that each family’s quality of life at Mezzacorona improves year after year. He describes the company’s farmers as “the guardians of the land,” using their sustainable techniques to both improve the wine quality and keep the community protected and prosperous, ensuring that children are content continuing their parents’ work. He’s adamant about “quality over quantity,” believing that compromising the quality of a community in favour of more money and people is a poor trade-off. Offshore motor boats are prohibited in favour of sailboats in the northern chunk of Lake Garda, part of the Trentino region, and although this may dissuade tourism, maintaining the livelihood of residents around the lake takes precedence. It’s about “protecting the land for generations to come,” Matricardi explains as we peer out at the sailboats scattered across Lake Ontario. The similarity to our setting is striking, as the RCYC’s allowance of powerboats has always been limited to a slim nine per cent but is available to support racing when called upon.

He pulls out a photo from his briefcase that showcases a woman on the vineyard who is scarcely a day over 25; there are 80-year-old men, fathers and daughters, and boyfriends of daughters. The average age of Mezzacorona’s farmers is decreasing, surely a sign that their efforts to prioritize sustainable succession for generations is paying off. “We started not as a company using grapes to make money,” Matricardi reflects. “We started because the people needed it. There’s a social goal we wanted to reach, and we reached it.”

Canadians casually gloss over wine labels in the aisles of the LCBO, and we typically fail to find a backstory, instead discovering what Matricardi so brilliantly describes as “orphan wines”—wines without a mother or father, without a story. Family is what makes us human, shaping who we are. Wine is no different, and Matricardi hopes to share that concept with as many people as possible.

“We care about showing everything—to open the windows on our life,” he says with a makinsmile. Indeed, the windows invite us into the vivid world of Mezzacorona and allow us to visualize the journey that the wine in our cup has taken, and the lives it has touched in the process.