As the old saying goes, “Always eat strange, experimental food before hopping on gut-churning, brain-scrambling, questionably safe rides at an amusement park.” That’s why the Canadian National Exhibition—open from August 19 to September 5—is the perfect place to take the entire family. This year, along with its usual ensemble of fun fair attractions (roller coasters, unbeatable games, giant prizes), there’s a bunch of wacky new culinary creations to test out. We went down to the grounds a couple of days early to rank all the food using a highly scientific methodology involving taste buds, tummy intuition and a bit of common sense. Here they are, ranked from “Why?” to “Wow!” 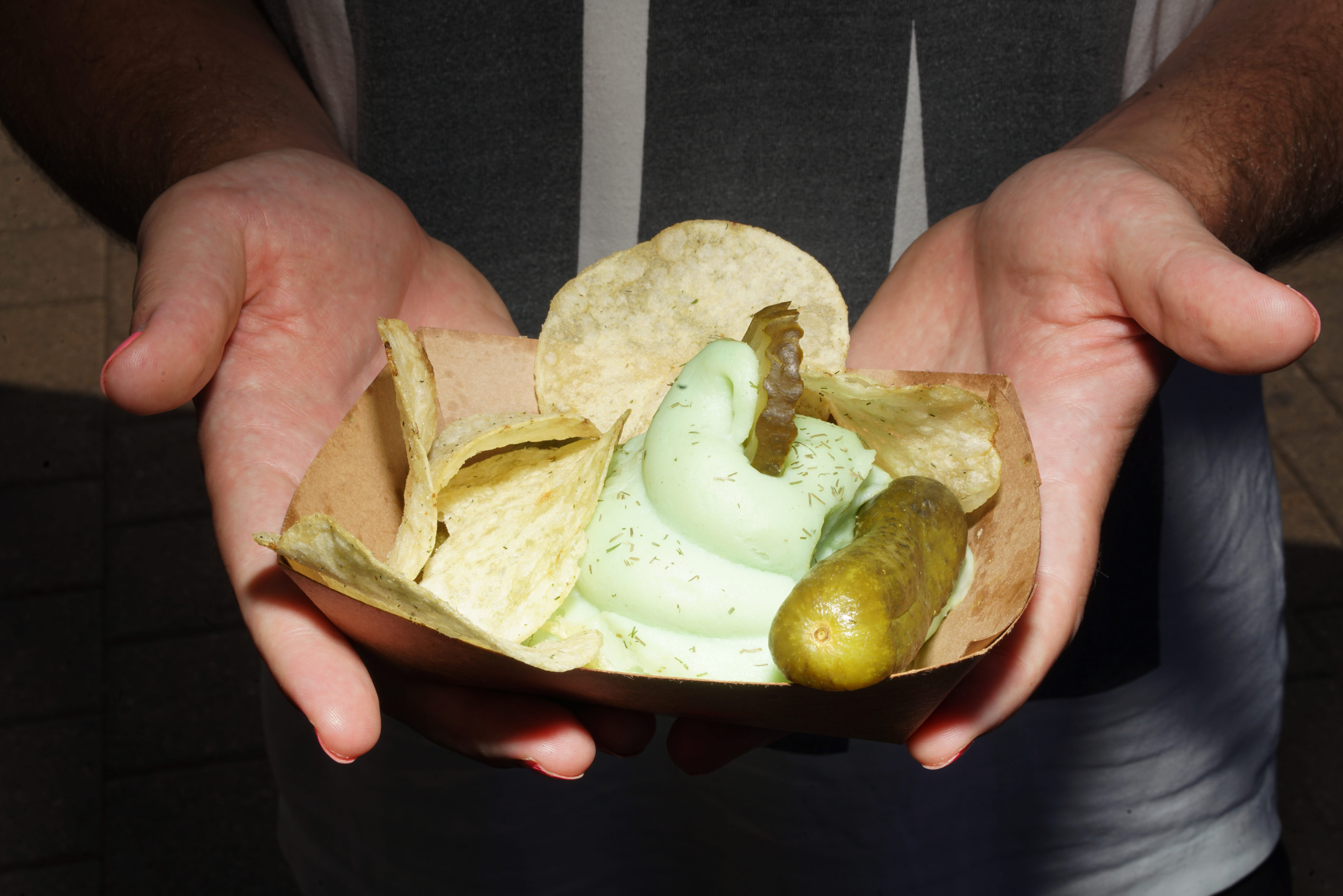 17 At the bottom of the list, perhaps unsurprisingly, is dill-pickle-flavoured vanilla ice cream accompanied by dill-pickle chips and an actual pickle. Did we mention the pickles? Pickles are delicious. This is, however, too much of a good thing. 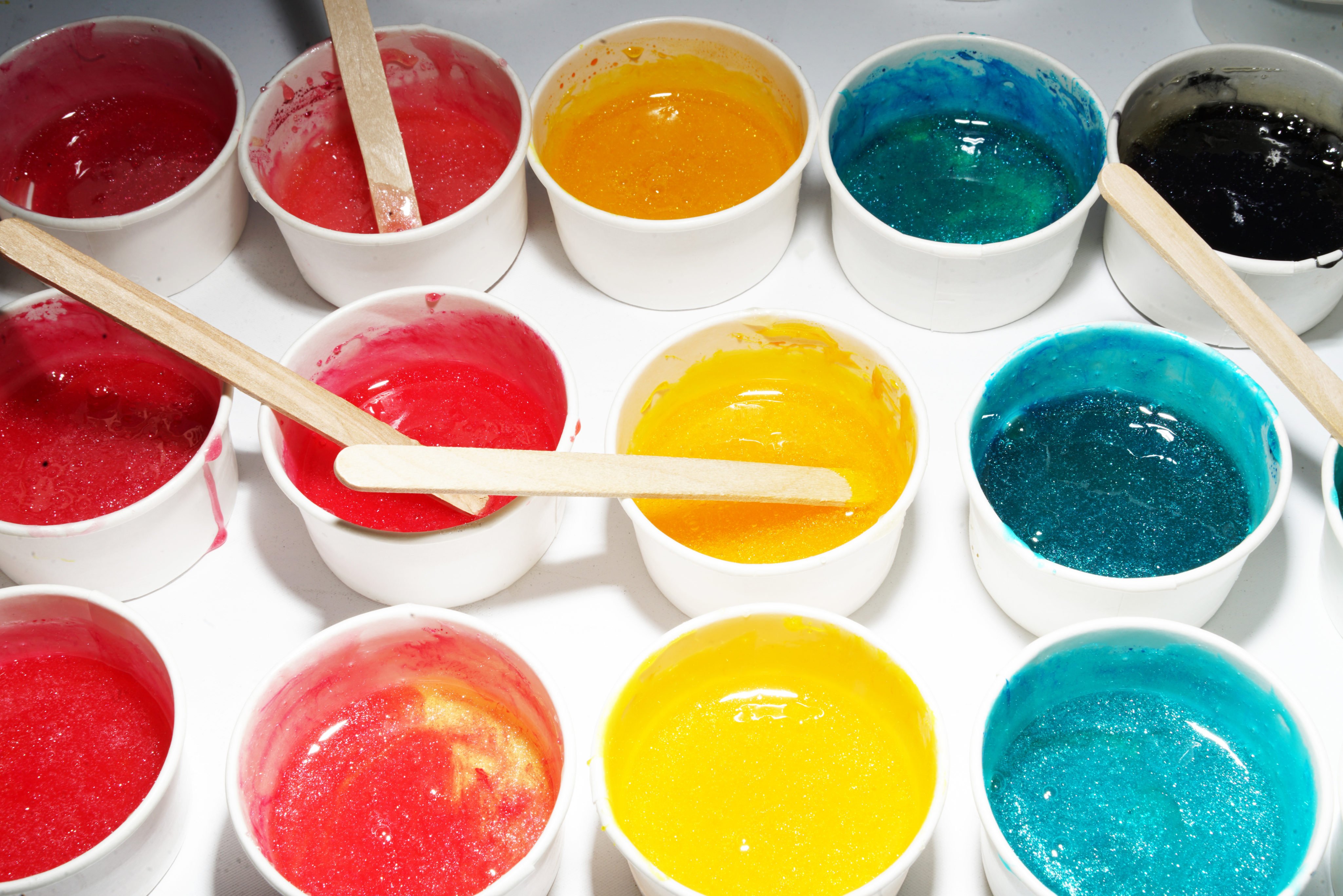 16 The best part about this goopy candy is using the popsicle sticks to mix the colours, sort of like an elementary school art project. Spoiler alert: each colour tastes the same, and that taste is Ricola cough drops. 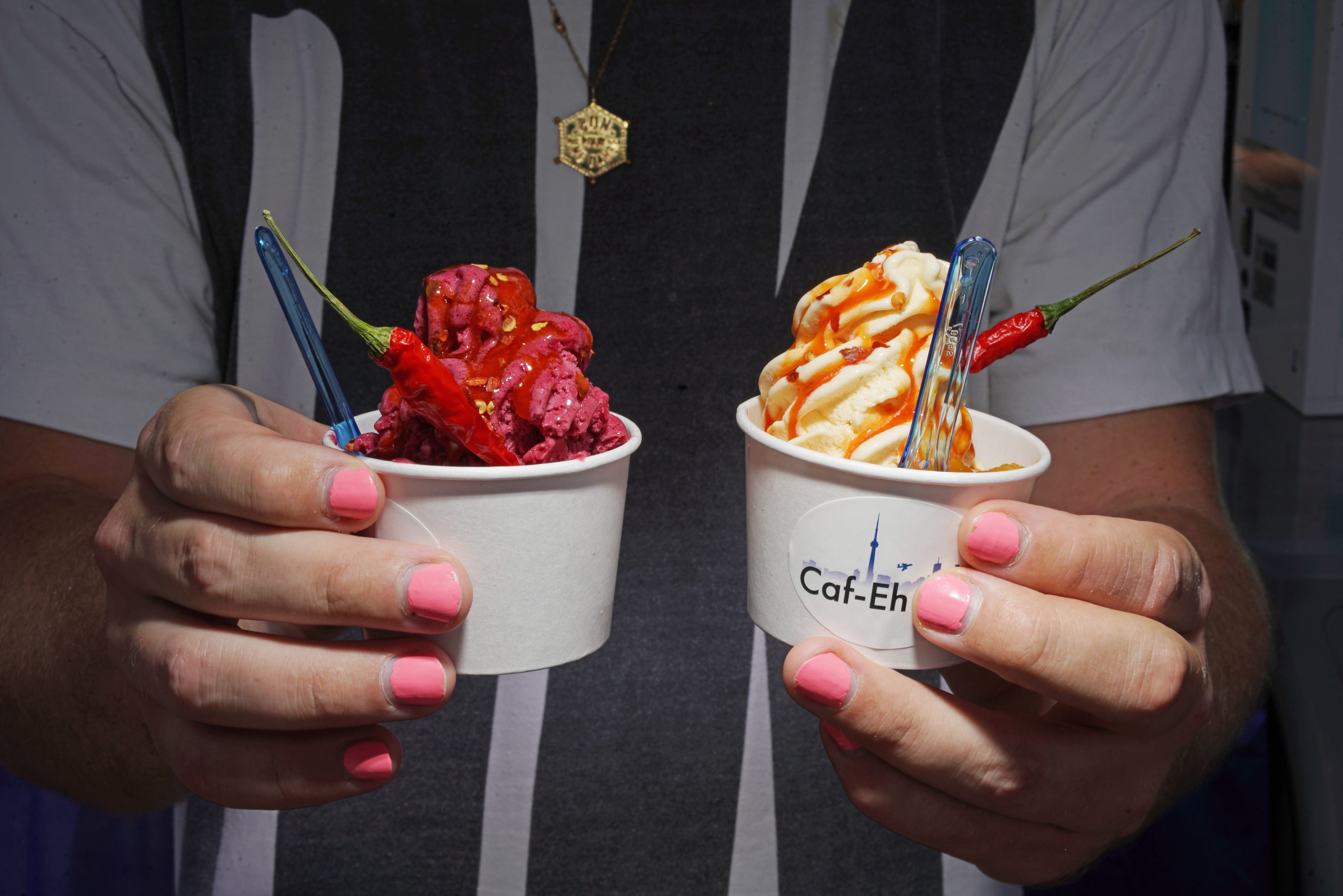 15 Sugar, spice and everything nice—but mainly those first two. Here we have ice cream (blackcurrant on the left, peach mango on the right) drizzled with a sweet-hot chili sauce and a topped of with a solitary pepper. Other flavours include strawberry, vanilla pistachio and chocolate. 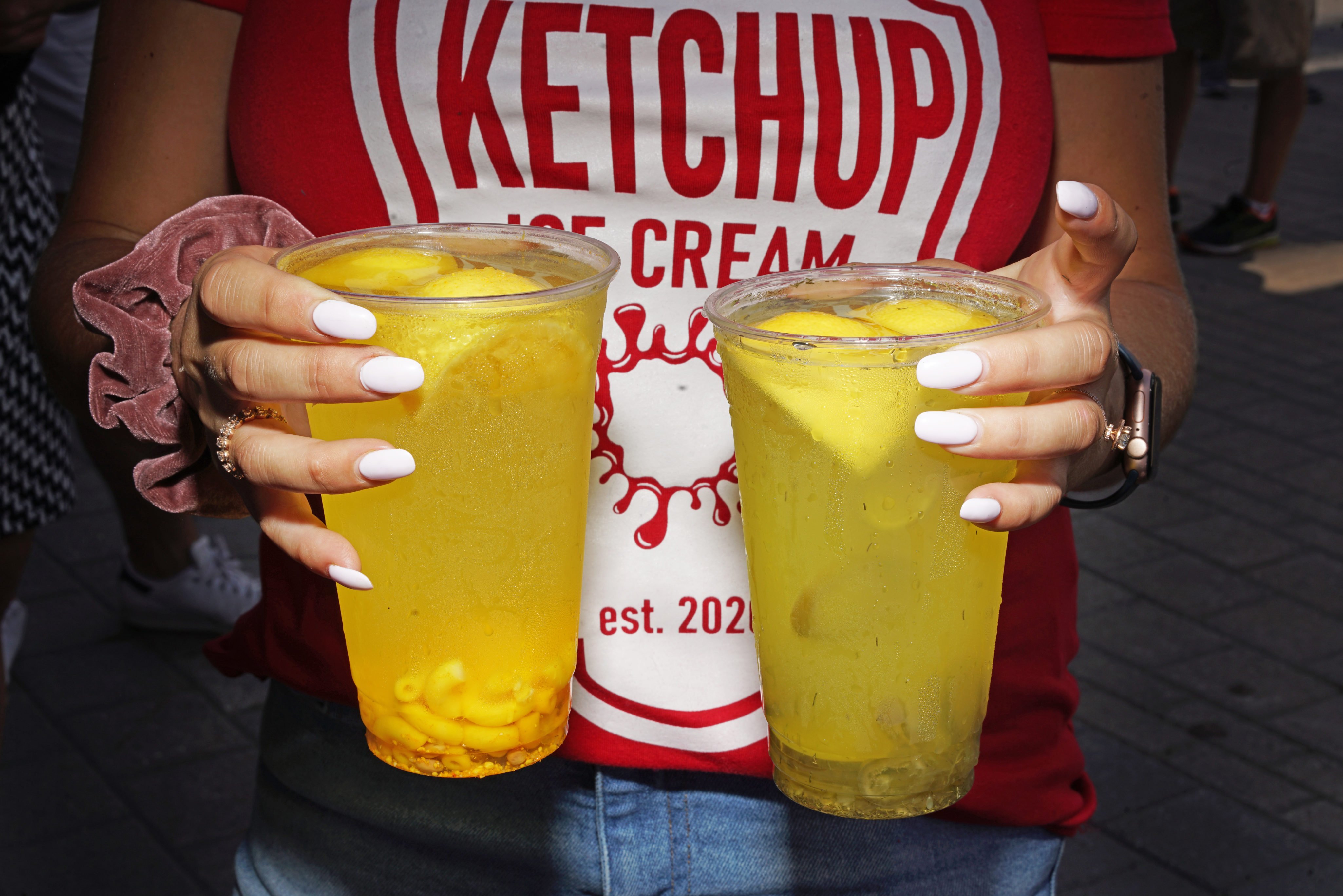 14 On the left, we have macaroni, a mix of three cheeses, lemonade and lemons. It’s like bubble tea but with lemonade instead of tea and noodles instead of tapioca balls. (Okay, fine, it’s nothing like bubble tea.) On the right, a concoction of pickles, pickle juice, dill, jalapeno and lemons. They both taste much better than expected: the sweet-tartness of the lemonade cuts the cheesiness; the jalapeno kick dulls the pickle aftertaste. 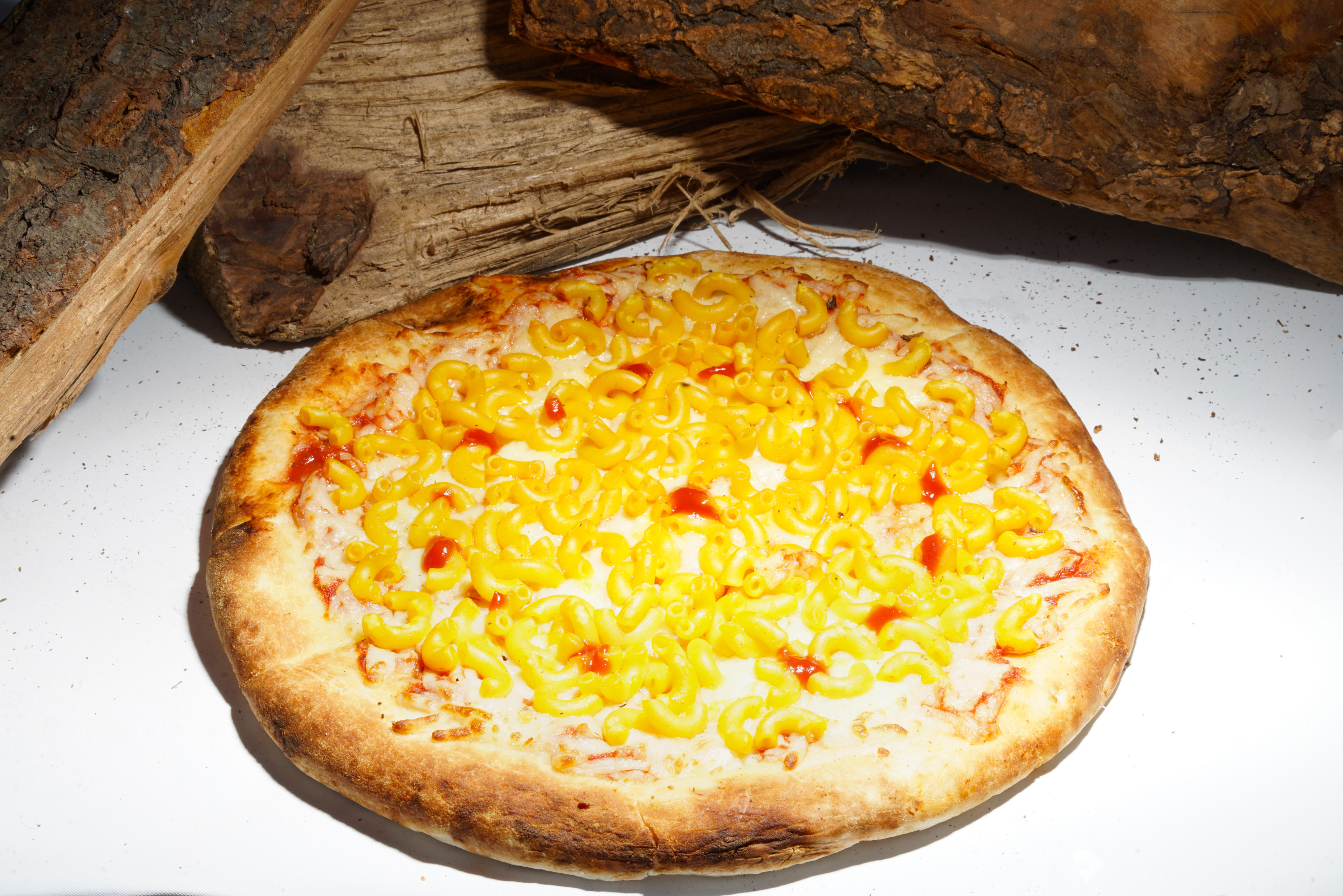 13 These culinary geniuses took two great things (margherita pizza, jalapeno mac and cheese) and made them one. For a final fun albeit unnecessary flourish, they topped it all off with a squirt of ketchup. 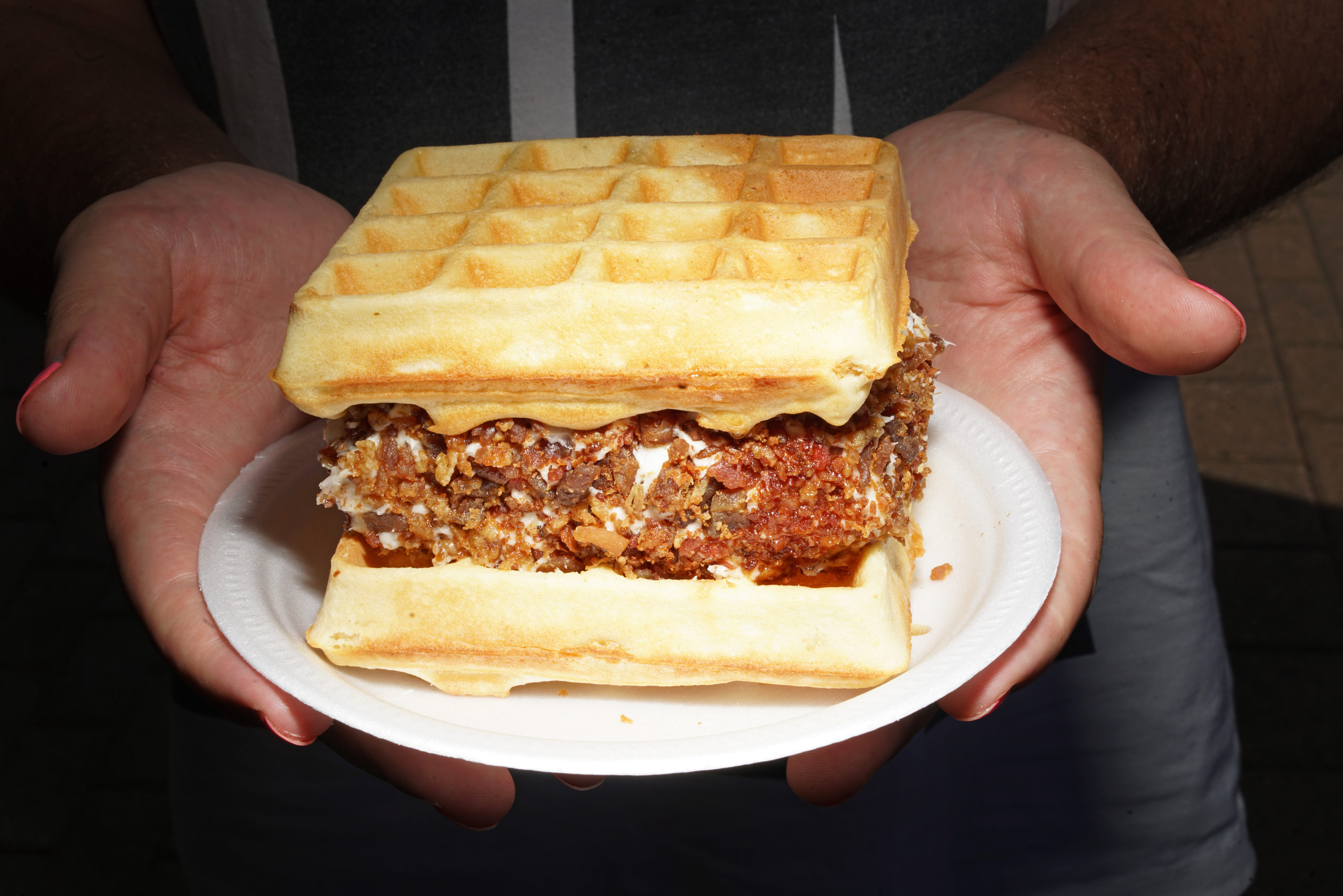 12 The name pretty much says it all here: a slab of vanilla ice cream coated in bacon bits and sandwiched between two waffles. It was as delicious as it sounds and also surprisingly heavy. 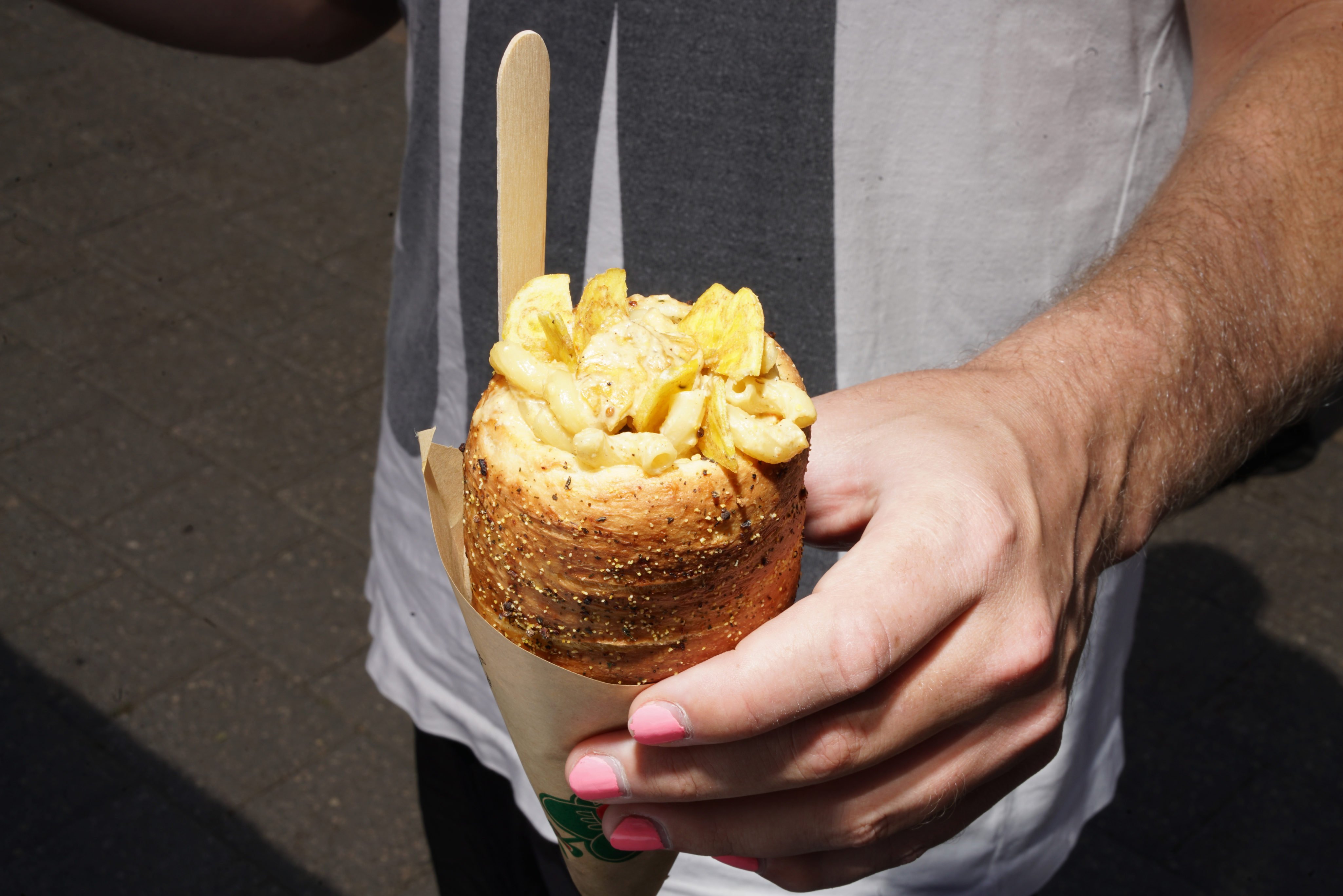 11 Behold, an absolute carb bomb—a freshly baked chimney cone stuffed with vegan mac and cheese. On the outside: garlic, herbs and olive oil. On the inside: macaroni, butternut cashew cheese sauce, jerk aioli and crispy plantains. Use a spoon or eat it like an ice cream cone.

10 Handmade corn tortillas in the shape of machetes (hence the name) stuffed with your choice of chorizo, beef or mushrooms. Why two feet long? “Why not?” says owner Adal Aguilar. “In Mexico, they sell these as quesadillas, which you find at every market. Toronto was missing that, so we decided to do it.” 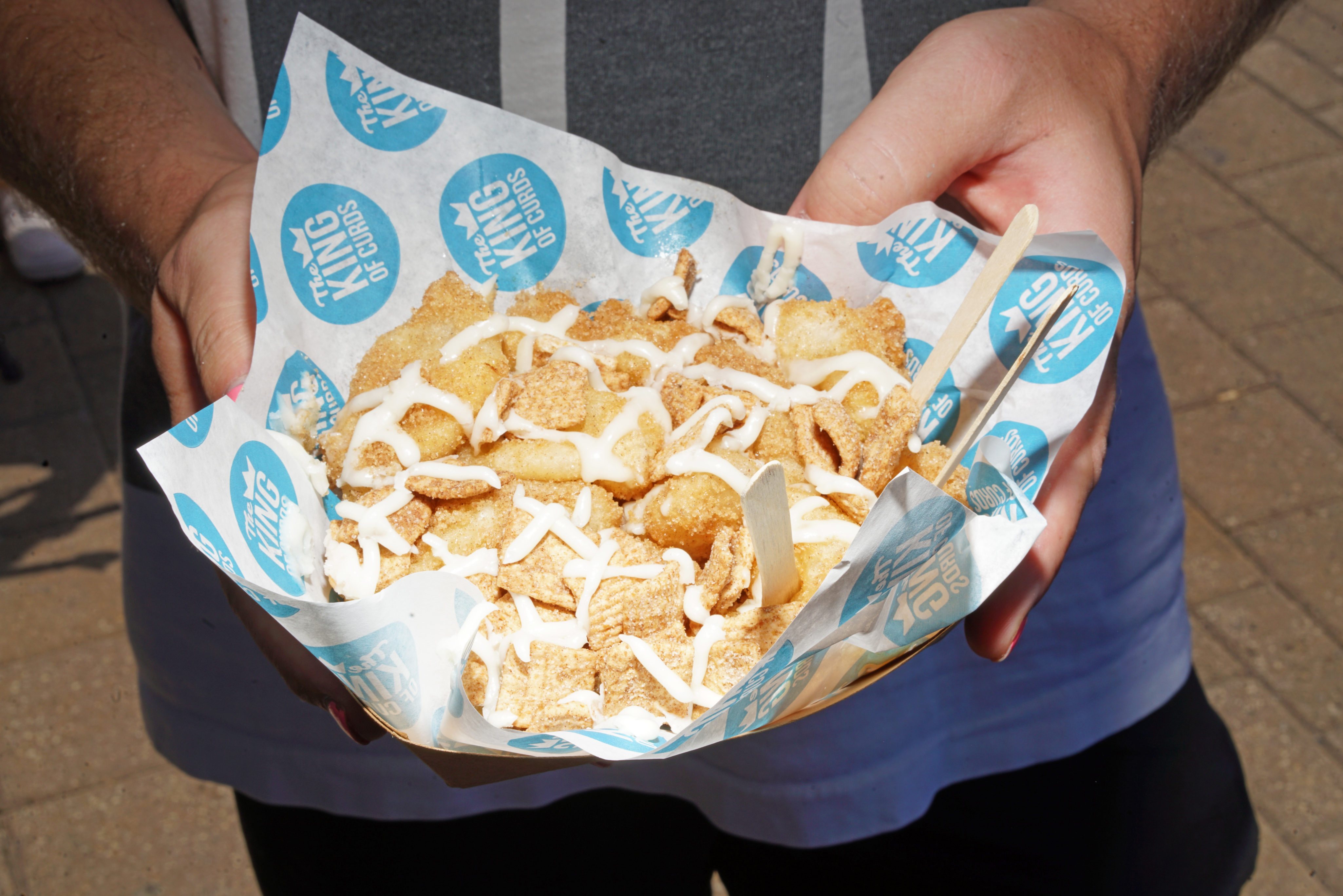 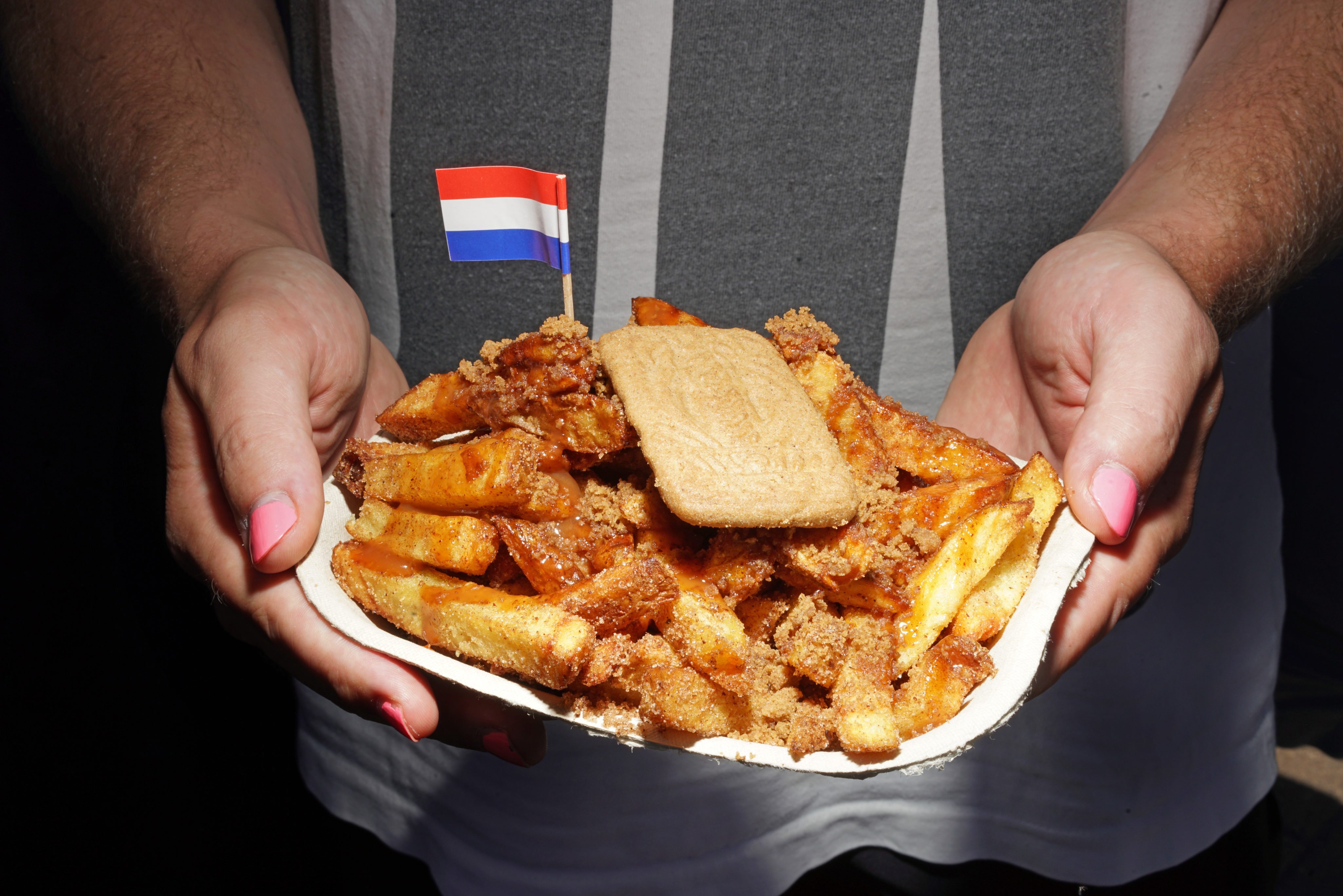 8 The Netherlands are known for many things: windmills, tulips, Van Gogh and—most importantly—fries. This sweet-and-savoury dish features all Dutch-imported ingredients, including the fries themselves, caramel, cinnamon sugar and speculoos cookie done two ways: crumbled and whole.

7 In a culture completely saturated with bizarro stuff (just scroll through TikTok for five minutes), it’s rare to find something so zany that it inspires shock, curiosity and repulsion all at once. Say hello to condiment-flavoured ice cream. It’s vanilla ice cream infused with a special Heinz ketchup or mustard mix, on a sprinkle-covered cone and topped with a pretzel (mustard) or a french fry (ketchup), and it’s not as gross as it sounds. 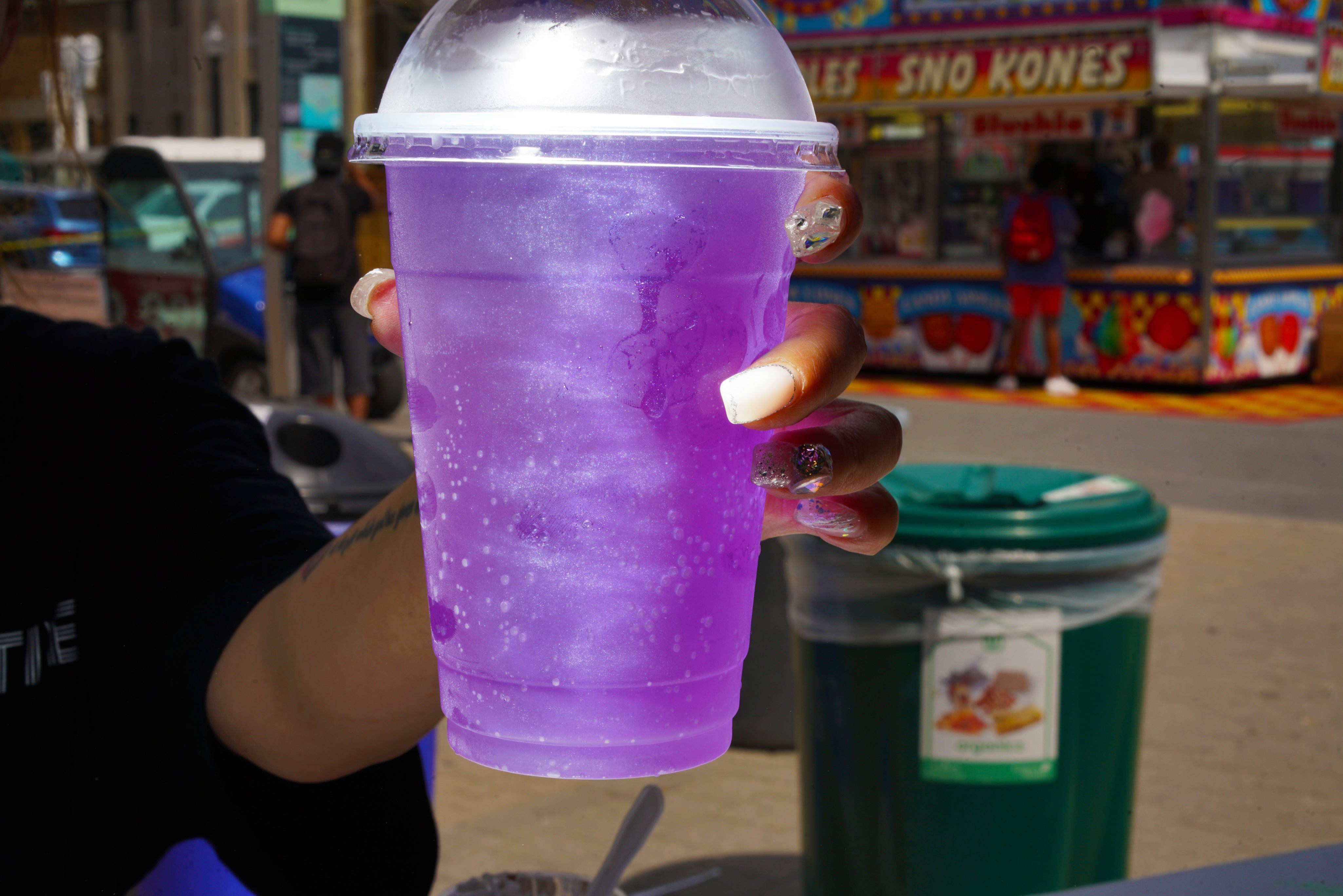 6 When we asked about the ingredients of this soda, we didn’t get a straight answer, leading us to reasonably conclude that it’s some sort of alien creation. But it tastes a lot like watered-down Sprite. As a bonus, there’s a light installed in the bottom of each cup, which, at night, makes the drink look like a swirly cosmic elixir. 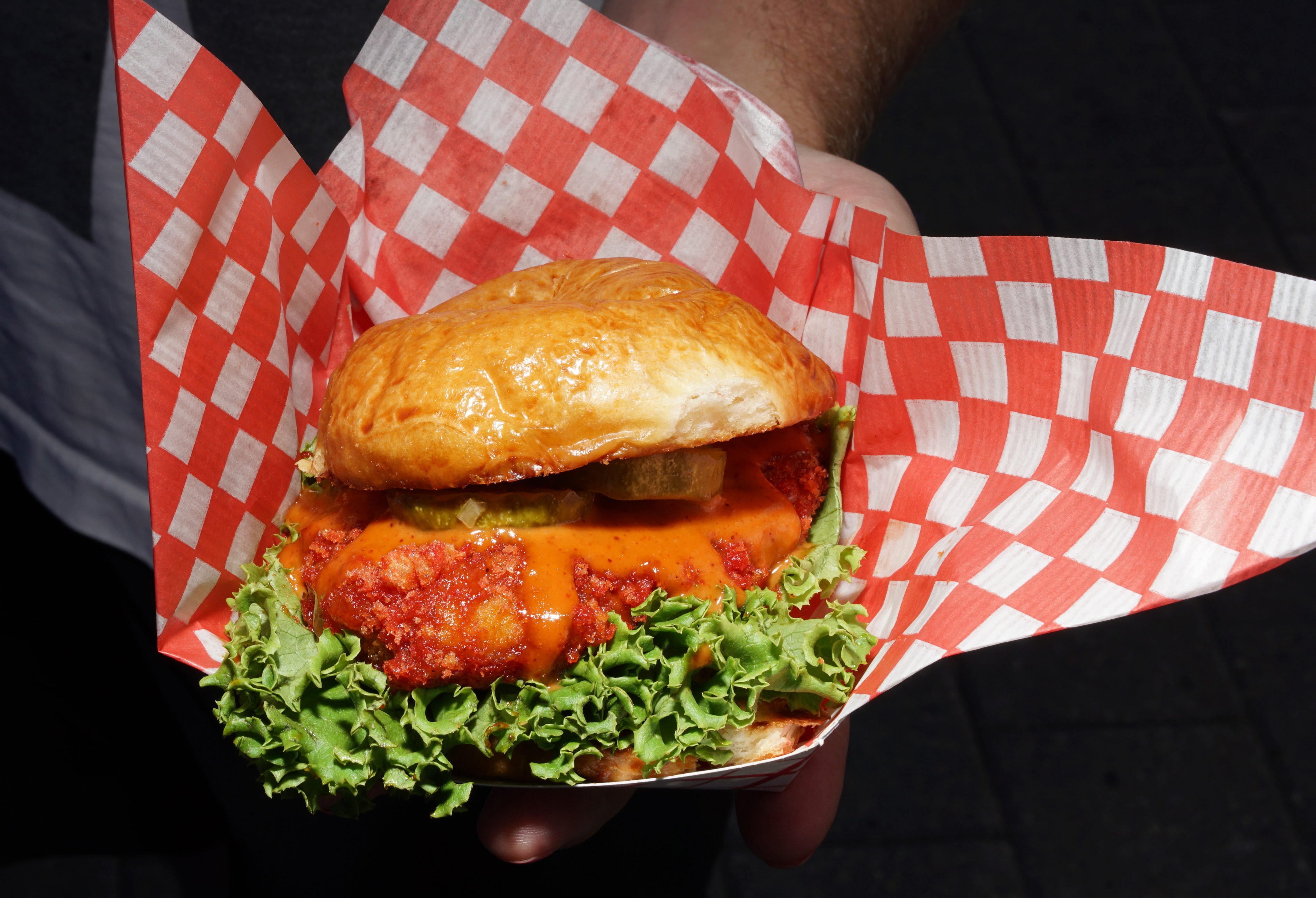 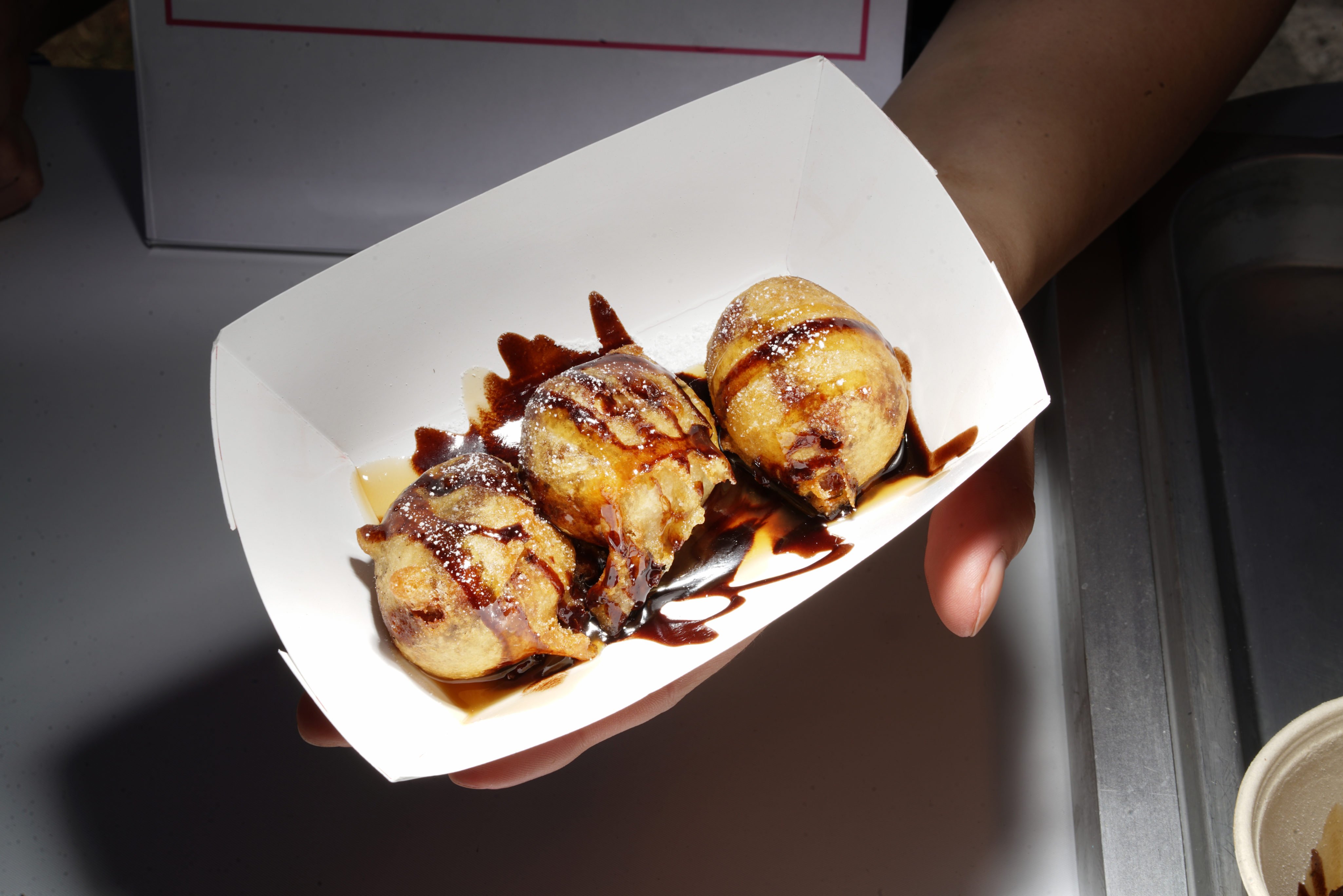 4 By now, deep-fried chocolate bars are a staple of the amusement park culinary scene, but they’re still satisfying. Here we have a cut-up Snickers bar deep-fried in pancake batter and coated in chocolate icing. 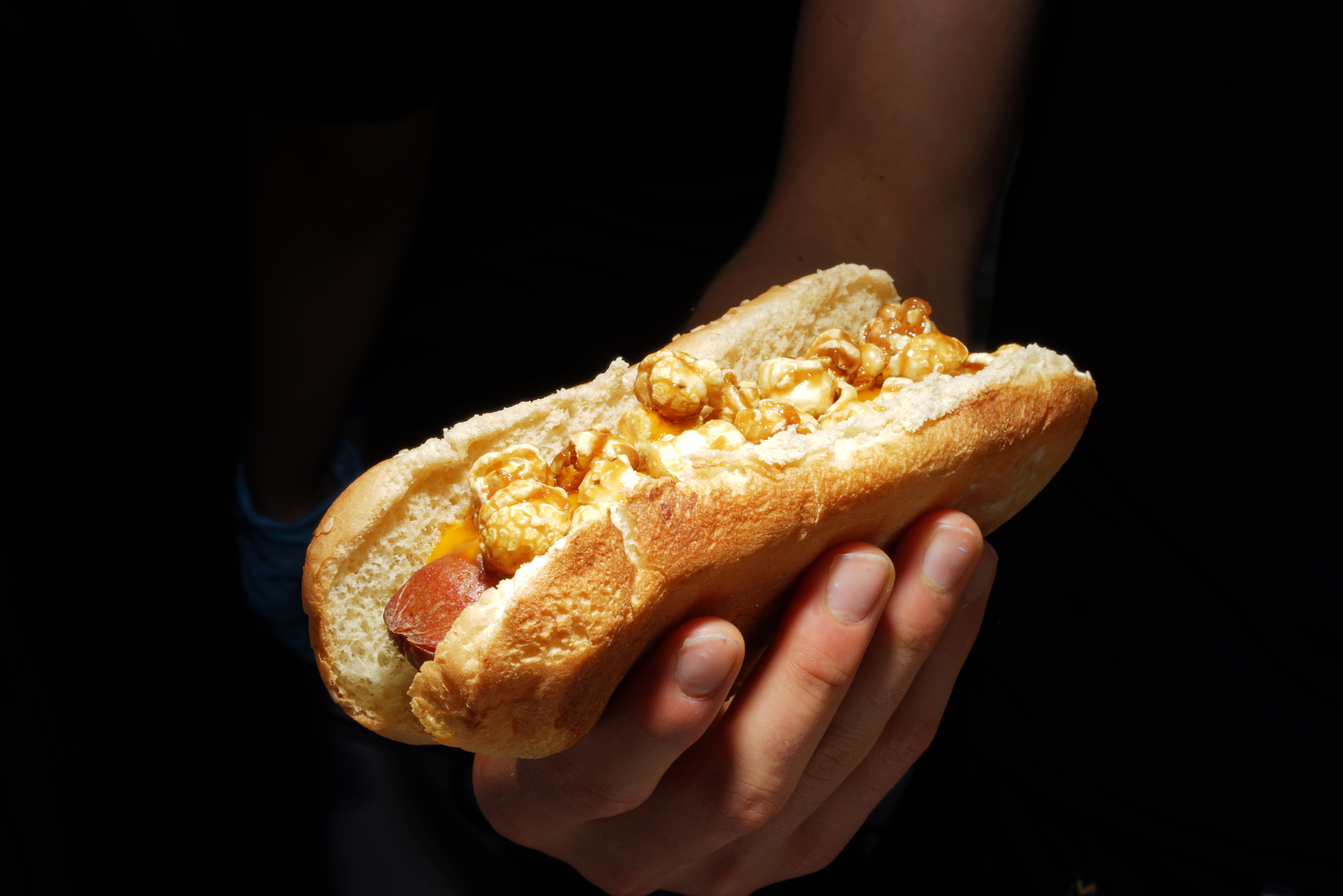 3 This creation inspires a spin on the classic song: “Take me out to the ball game, take me out with the crowd, buy me a beef hot dog with cheddar cheese and caramel corn…” 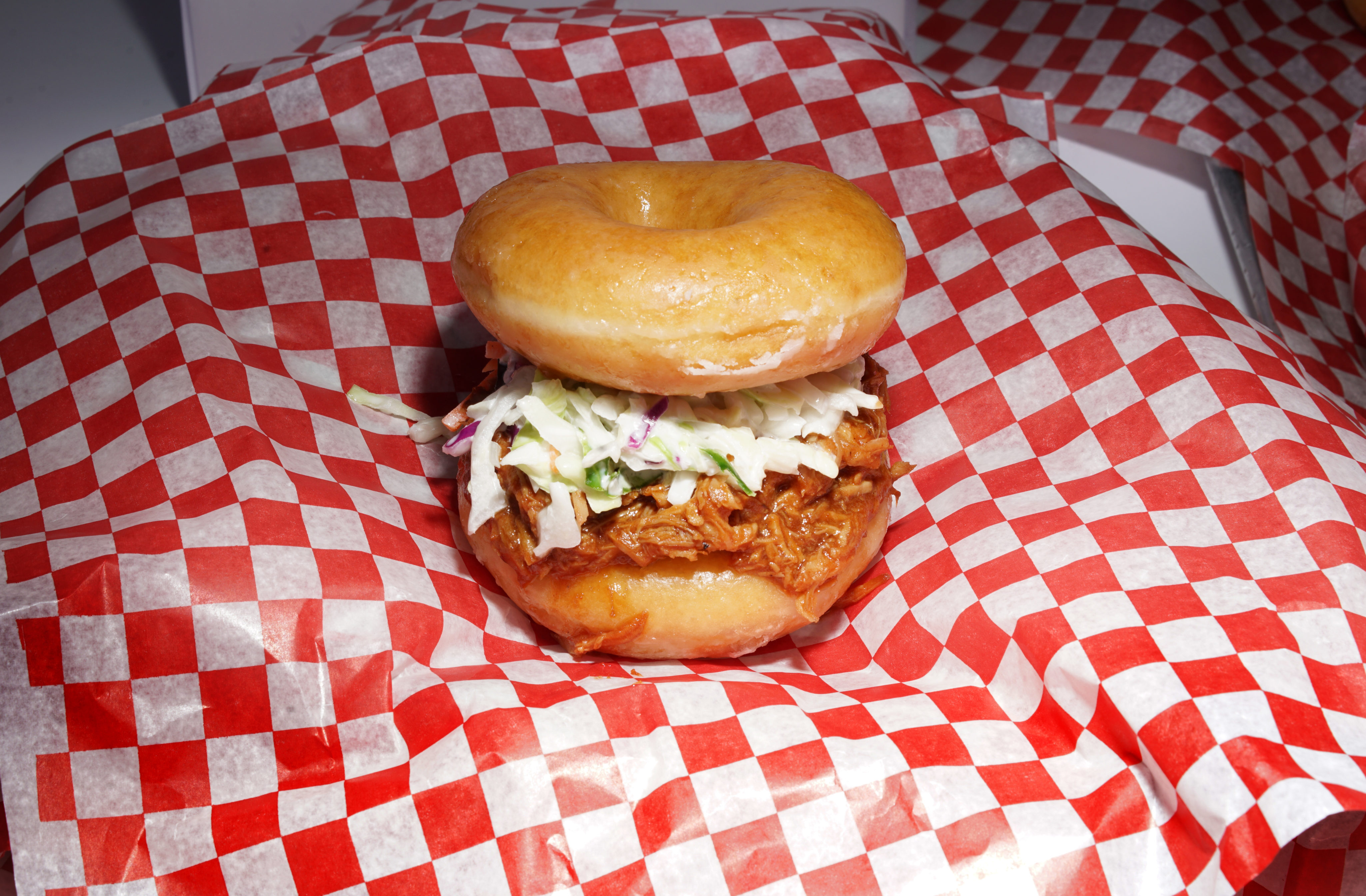 2 Let’s do some math. One glazed doughnut—in all of its golden, deep-fried glory—plus savoury pulled pork in a sweet barbecue sauce and cold, crunchy coleslaw equals absolute happiness. 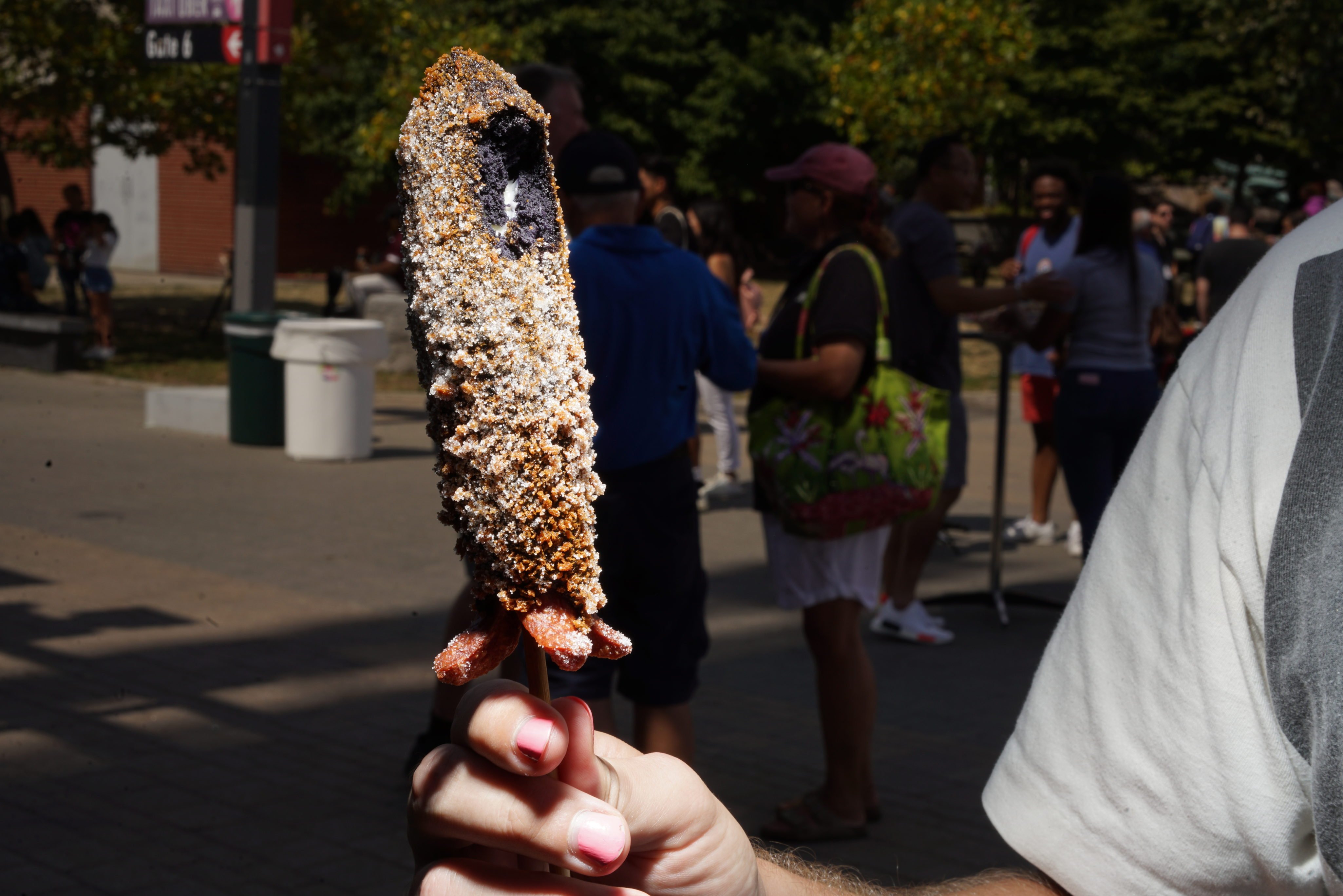 1 At first glance, it’s horrifying, like an ancient crustacean pulled from the bottom of the ocean and skewered with a small wooden stick. In reality, it’s half mozzarella cheese and half hot dog, ensconced in deep-fried, squid-ink-dyed batter and rolled in sugar. (The wiener is cut and flared at the bottom to resemble little squid tentacles.) Hot take: it’s the most surprisingly delicious new item on offer.