In late November, Jody Shapiro hit the pavement with his camera. It was three days after restaurants in Toronto and Peel returned t0 takeout-only status for the second time, and the Antler co-owner and documentarian wanted to see how some of his fellow hospitality workers were making the pivot—again. The resulting series, called Lockdown 2.0, shows often-solitary restaurant staff at Antler and some of its neighbours, in stark black and white. They’re masked and navigating the beginnings of a Covid winter without dining room customers.

The images are now on display in the window of Stephen Bulger Gallery on Dundas West, and are being auctioned to benefit not-for-profits Save Hospitality and The Full Plate. We spoke with Shapiro about what the series means to him, and what’s next for the team at Antler facing the possibility of another lockdown.

You started taking the images in this series during Toronto’s second lockdown, which began in November. Why then?

I needed to be inspired. I needed to feel like we were all still part of the same team. On a personal level, it was interesting to see how all of these restaurants reinvented themselves. And whether we liked it or not, we’ve all learned skills that I think, once we’re out of this, we’re going to look back and see how much we actually grew part of this time. Maybe not financially… 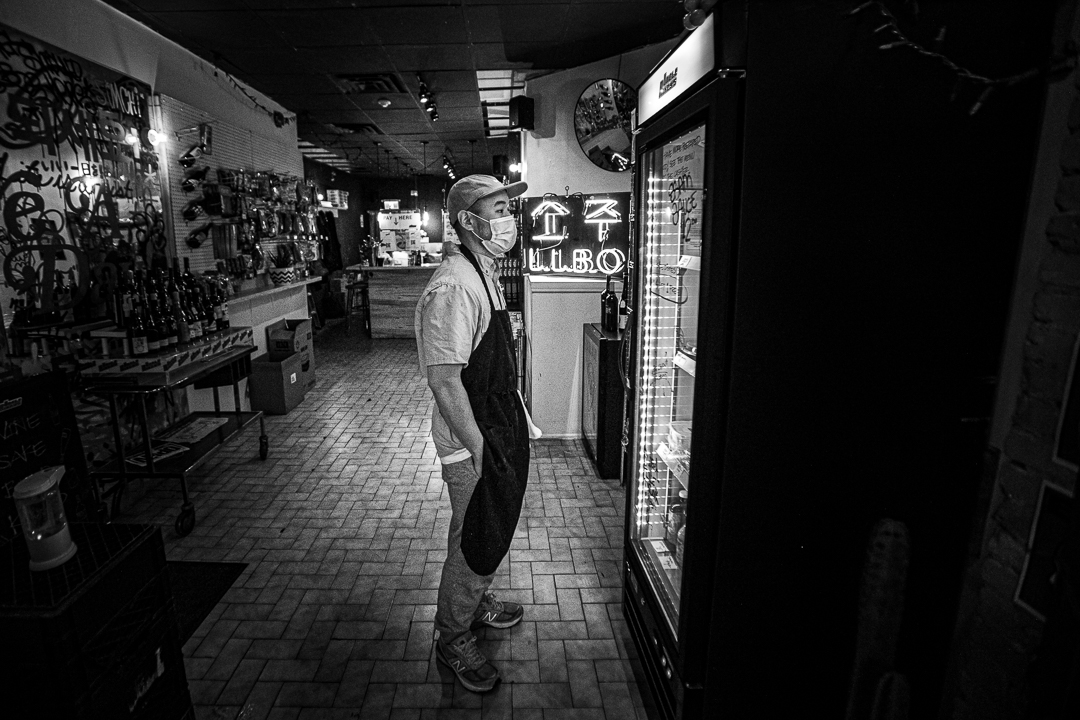 It’s interesting that you mentioned the teamwork and camaraderie element, because there’s a loneliness to all of these photos.

I was feeling very alone! At the height of Antler, which was last March, we had 22 employees. We’re down to four. What usually is a very busy kitchen is now just one person on the stove. What usually was a very busy prep room is now one person. Everybody had to make decisions that really just affected themselves, which, yes, I think comes across in the images. Mikey Kim, for instance, at Uncle Mikey’s has pivoted to become more of a bodega. And that was a call that he made on his own. There was no one there to coach him.

Your subjects run the gamut from restaurant owners to chefs to front-of-house staffers. How did you decide who to shoot?

You know, a lot of restaurants are kind of portrayed by their star chef. But now, you can’t recognize who the star chef is, because they’re covered in a hat and a mask. And so is the general manager. And so is the server, who is now also doing deliveries, or the sous chef who’s now also doing dishes. Everybody’s sort of blended in, and these positions have shifted, which creates this anonymous feel for the restaurant, which I like. It shows how everyone is coming together, and it doesn’t matter who they are or what they’re doing. 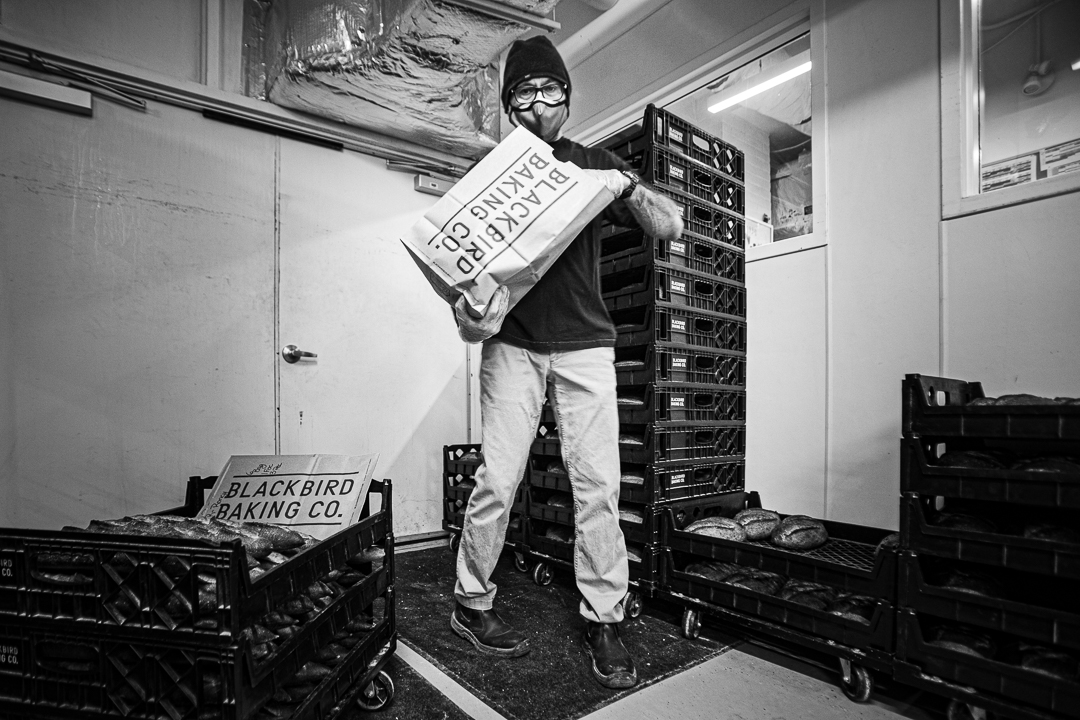 How did you decide which restaurant to feature?

It was so organic. I might be walking to Antler, and I’d walk past Sakai Bar and just pop in and say, “Hey, let me take some photos of what you guys are going through.” It was a nice way to reconnect with my neighbours. I offered all the restaurants the photos, in case they wanted to use them for anything on their end.

Did you aim to sell or distribute the photos?

No, it started as a personal project. It was a chance to get my head wrapped around more creative things. It was about six weeks into it, when the restaurants were starting to enjoy the photos, that it occurred to me that the photos could be used for a fundraising effort. I had a mutual friend who approached Stephen Bulger at the Bulger Gallery, and Stephen basically said, well, how can I help? 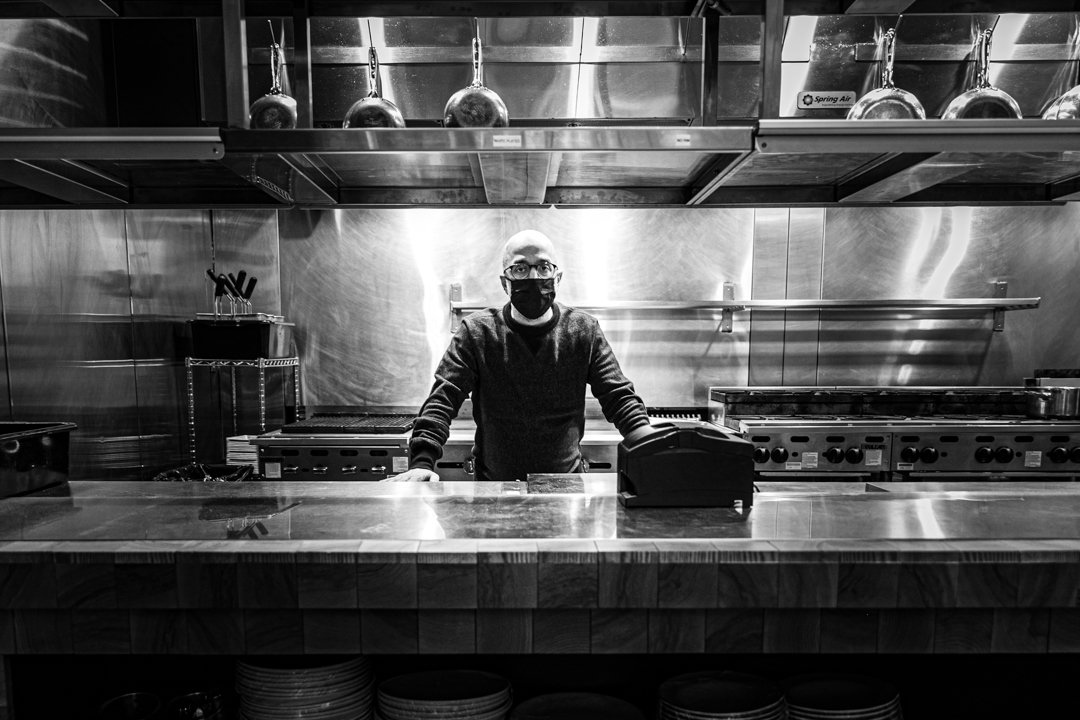 The photos are being auctioned to benefit Save Hospitality and The Full Plate. How did you choose those organizations?

John Sinopoli of the Ascari Hospitality Group has been, from the start, really helping restaurants navigate the business aspect of the pandemic. He and Save Hospitality put out a lot of really helpful information for things like, for instance, how do we lobby the government? How do we deal with insurance? And Full Plate has provided a resource for restaurant staff for help with legal issues, mental health issues, gift certificates for food. So I thought since those two organizations have provided so much help, I could give back to them.

Antler, like the rest of Toronto’s restaurants, has been in some form of lockdown for more than a year now. How’s it going? 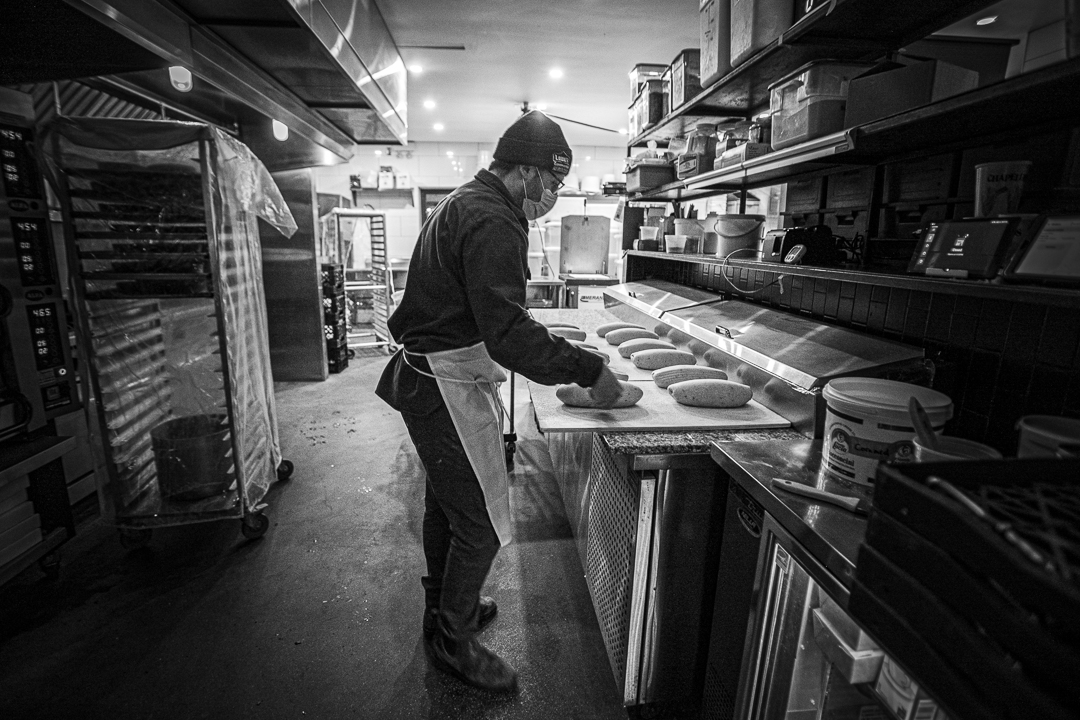 I guess that says it all.

I’ll be honest: once the other restaurants outside of Toronto started opening for indoor dining earlier this year, we noticed a real hit. And it was very, very frustrating. My 79-year-old mother-in-law lives with us. I’ve been very careful regarding safety protocols. But it was very frustrating to see that, you know, people can drive 45 minutes to Hamilton and go out for dinner. Meanwhile, we were still completely locked down.

But now patios are allowed to reopen, at least with limitations.

Oh, we’re open. Some places took a week, but we reopened right away. We’re lucky that we have our Hunt Camp in the back, which is fully ventilated on both sides. We gave it a good wash, we adapted the menu, and we were able to bring back two staff members. All four tables were booked on our first night. 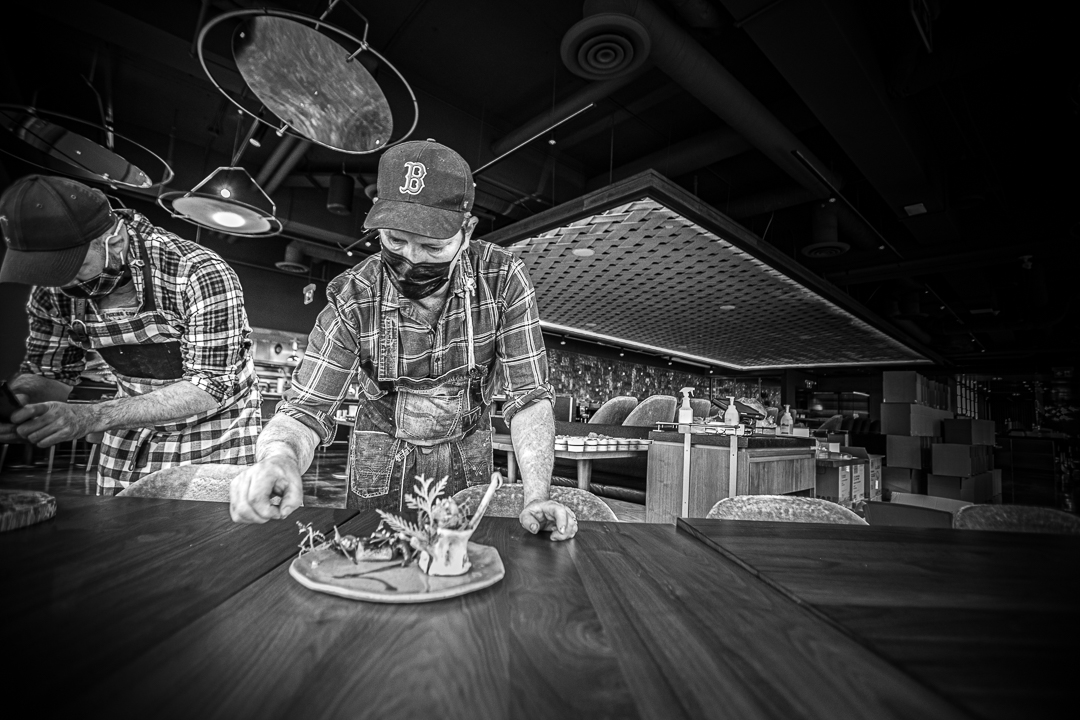 How are you feeling about the possibility of another lockdown?

I completely understand why these lockdown decisions have to be made. It’s just very hard being caught in the middle of it all. The way this has been managed, and then communicated, has been very harmful to the business. Every time we have to pivot, it costs us thousands of dollars, and hours of time wasted. We just hired three people back and now these rumours create uncertainty on all levels of operations. We’re hanging on because we know if we can survive until summer, and open our CafeTO curbside patio, we’ll make it to the other side. But imagine thinking at this time you need to spend $5,000 on patio tables and a fence to be ready to open in May, when you have no idea if that will be allowed to happen.

At least hospitality staff is on the list to be vaccinated soon.

If you think about it, other than maybe a dentist, what other workers are constantly around other people, in an enclosed space, where those other people aren’t wearing masks? It seemed absurd to me that hospitality workers, who have suffered so much, wouldn’t be vaccinated sooner. Especially when that’s not just a way to keep people safe, but to keep businesses open. So yes, I’m really happy about it. 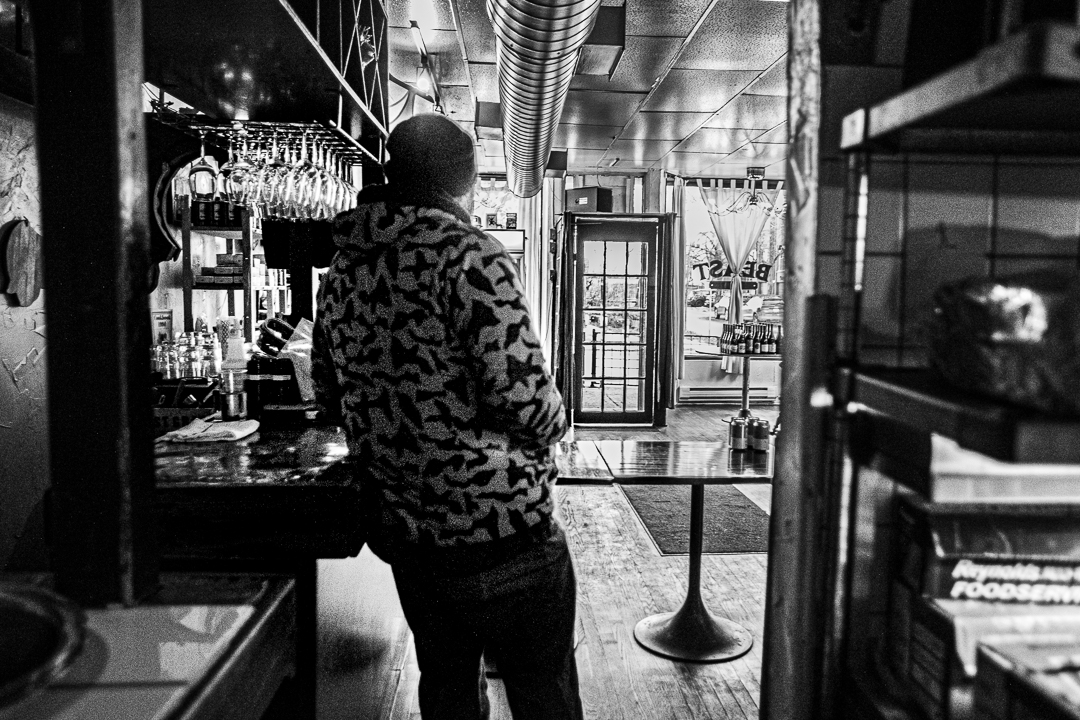