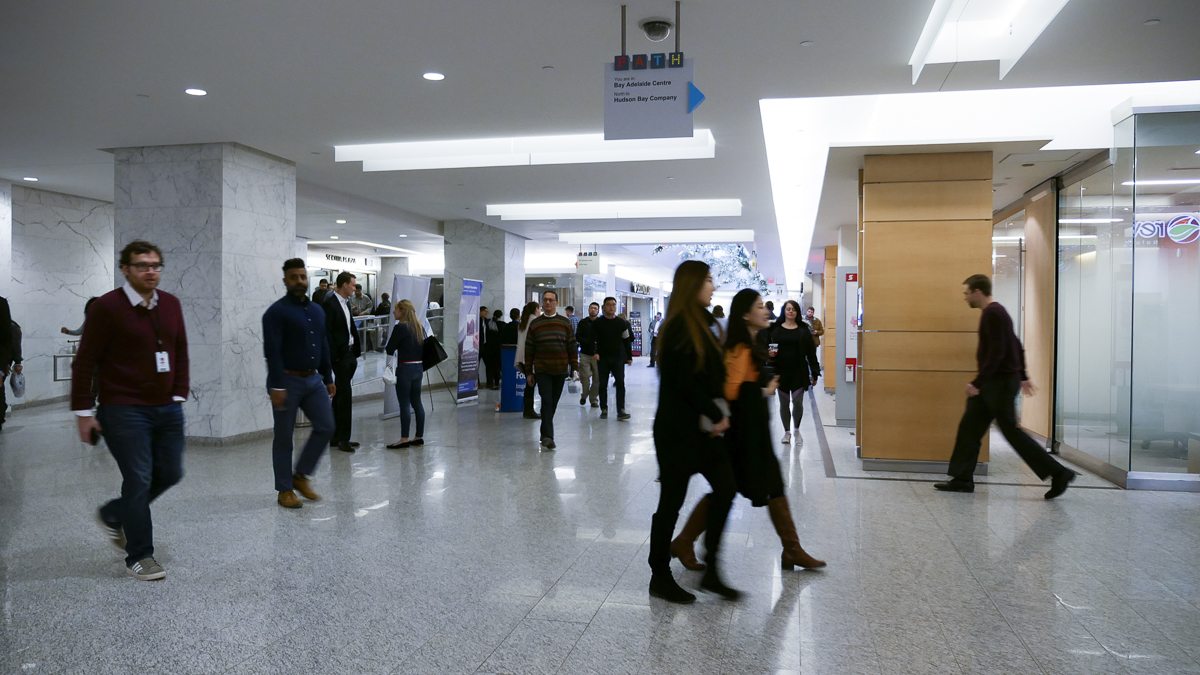 Toronto is home to the largest underground pedestrian network in North America. More than 200,000 people use the PATH every day and there are over 1,200 retail operations housed within the subterranean labyrinth that stretches over 30 kilometres in length, connecting nearly 80 office and residential buildings. It can take you from King Station, all the way to Roy Thomson Hall, without setting foot outside. From the Eaton Centre to the Air Canada Centre.

Once only frequented by Bay Street types, the PATH is no longer just a way to get from point A to point B, but a destination—especially when the food options have grown to include more than just McDonald’s and Manchu Wok (no offense to either McDonald’s or Manchu Wok). This is all especially helpful when the city is crippled by the cold. Here, 13 places you should be eating in the PATH right now. Take off your coat and stay a while—it’s warm down here.

For a long time, good coffee was hard to find in the PATH. Seven years ago that all changed when barista and café owner Sam James set up his grab-and-go counter.

Nearest intersection: King and University.
What to order: The lattes are always a good bet. There is also a small selection of fresh pastries that come in daily from Glory Hole and the Tempered Room. Do yourself a favour and treat yourself to a croissant. 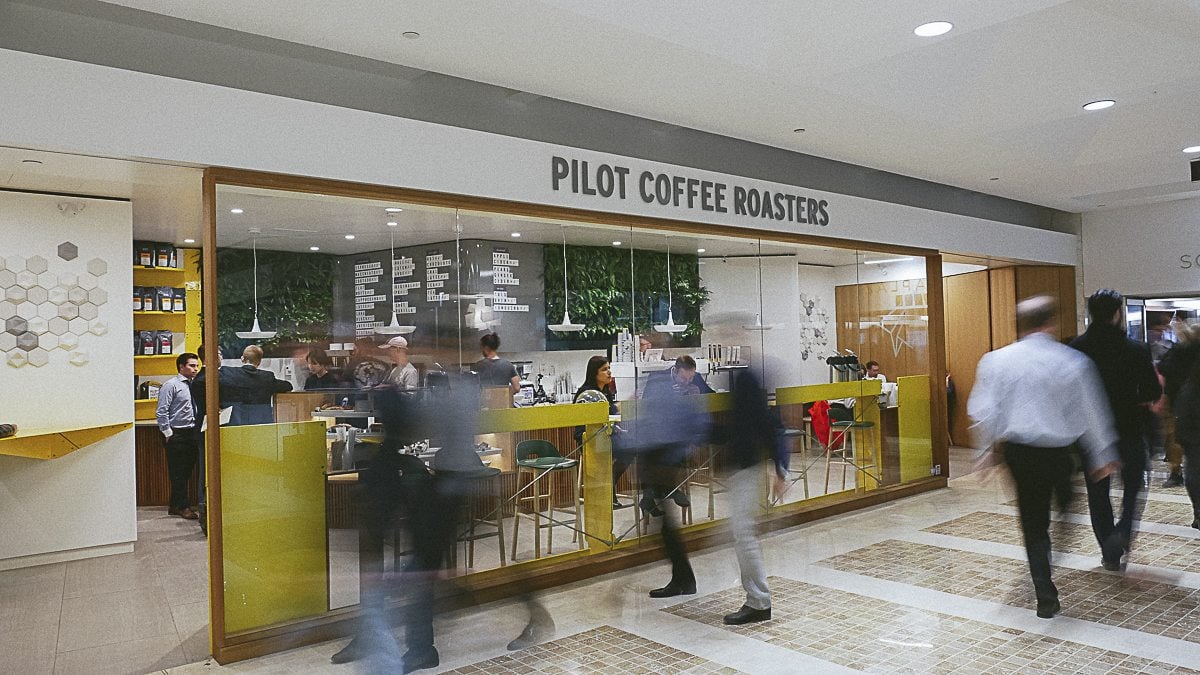 The newest place to caffeinate yourself in the PATH is from Pilot Coffee, one of the city’s best roasters.

Nearest intersection: King and Bay.
What to order: Pilot offers a full espresso menu using direct-trade beans. We can’t really think about cold brew right now, but if that’s your thing, it’s available on tap and in cans. 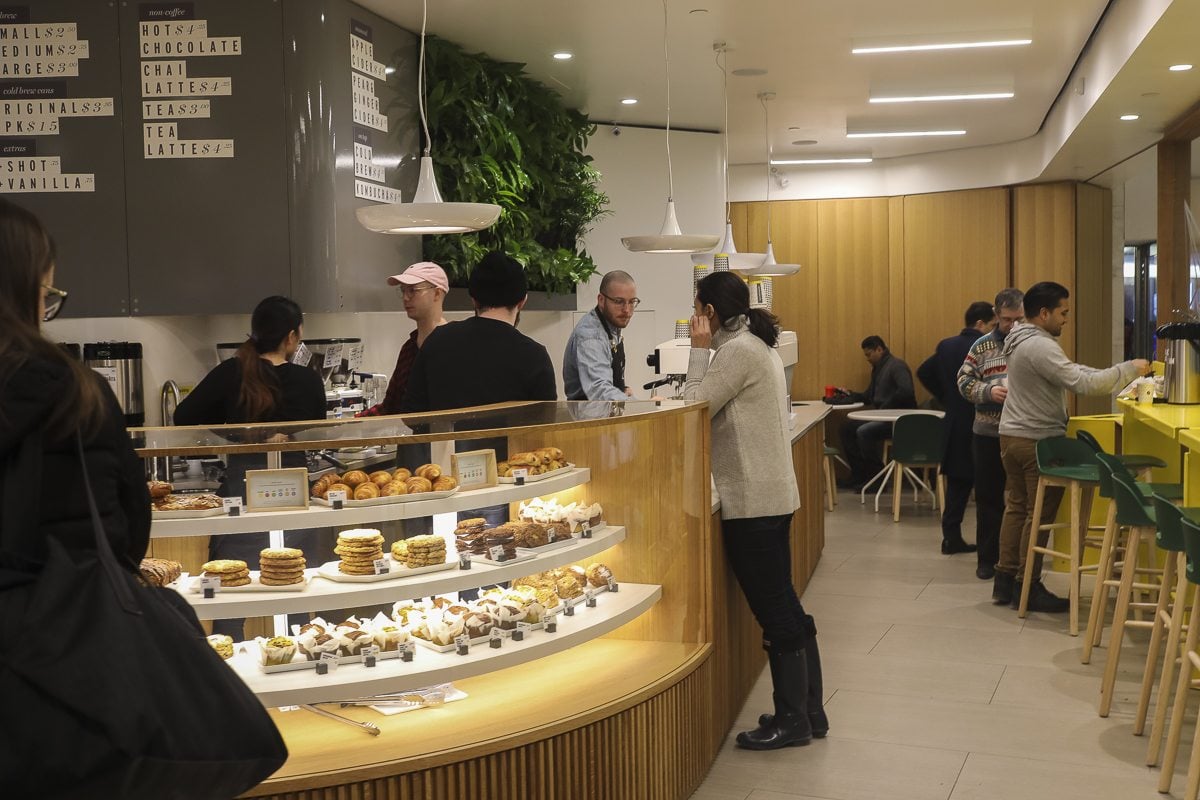 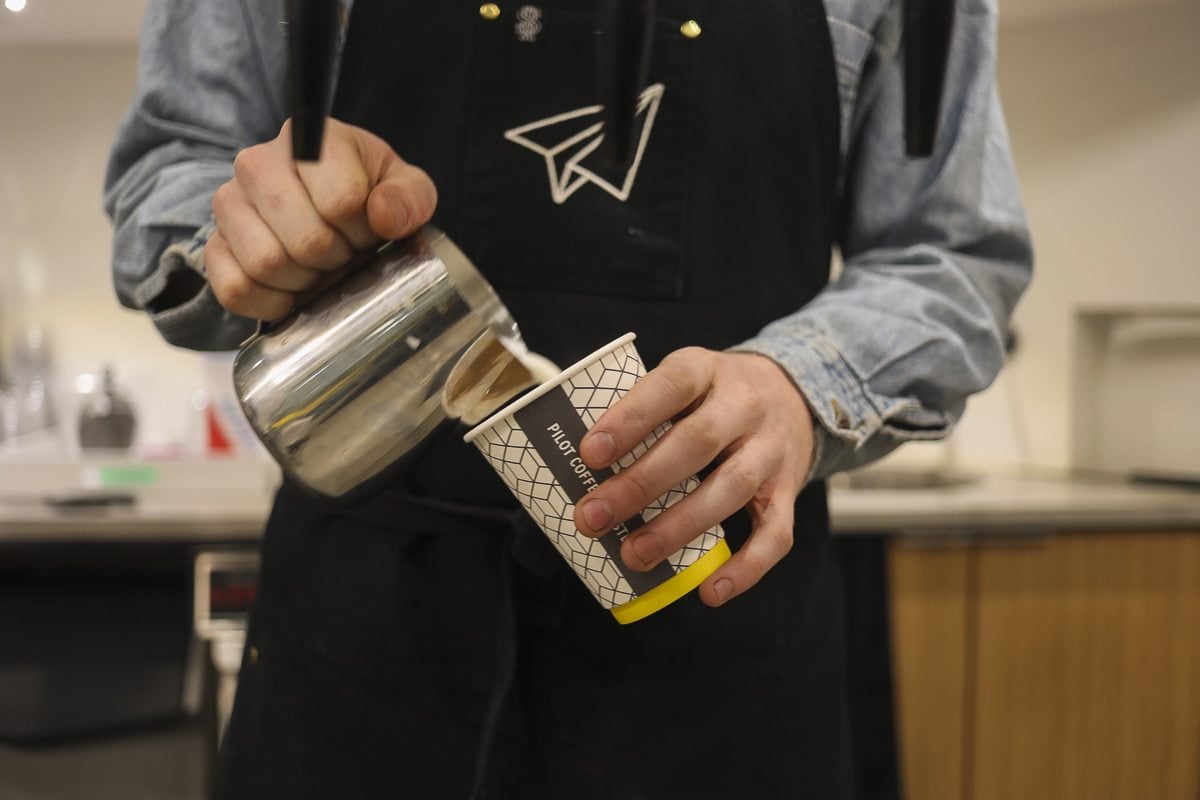 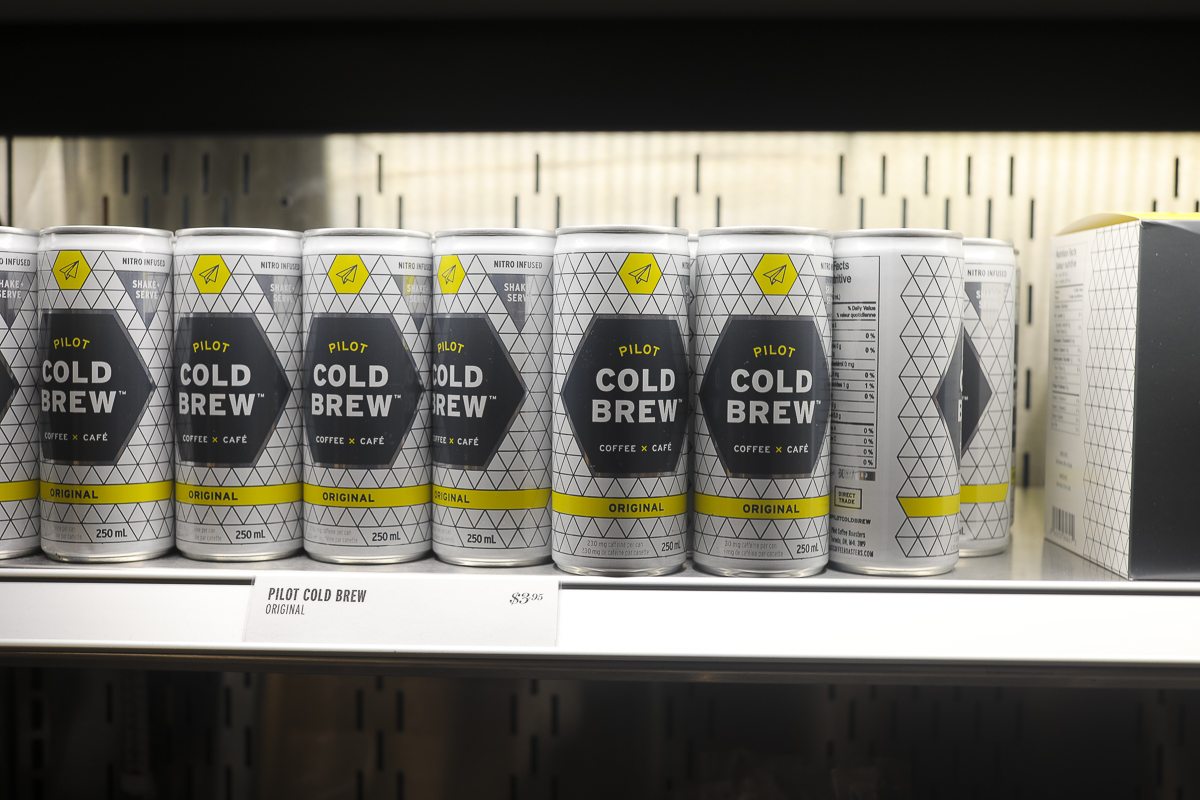 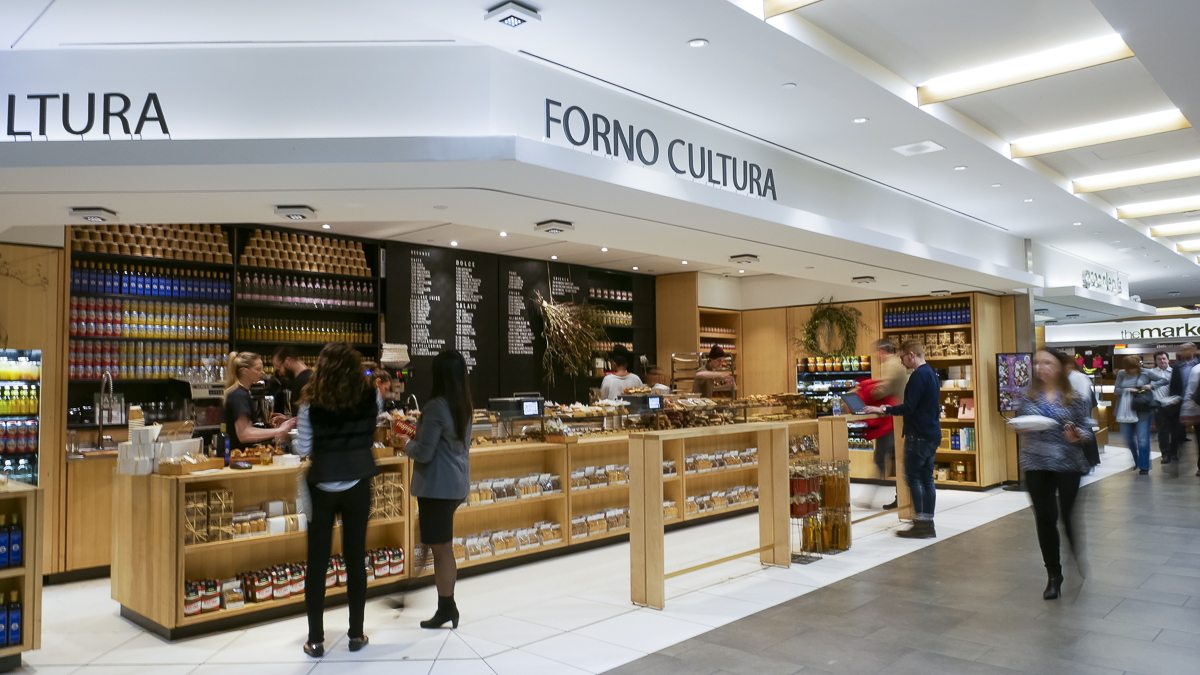 One of the city’s favourite Italian bakeries has brought its baked goods—cookies, bread, sandwiches, cornetti and more—to the PATH. There’s even a selection of cured meats from Niagara and cheese from Perth’s Monforte Dairy.

Nearest intersection: Bay and Adelaide.
What to order: Forno’s crusty sourdough breads are some of the best in the city, so pick up a loaf on the way home. For lunch, grab a sandwich on some of that freshly baked bread. 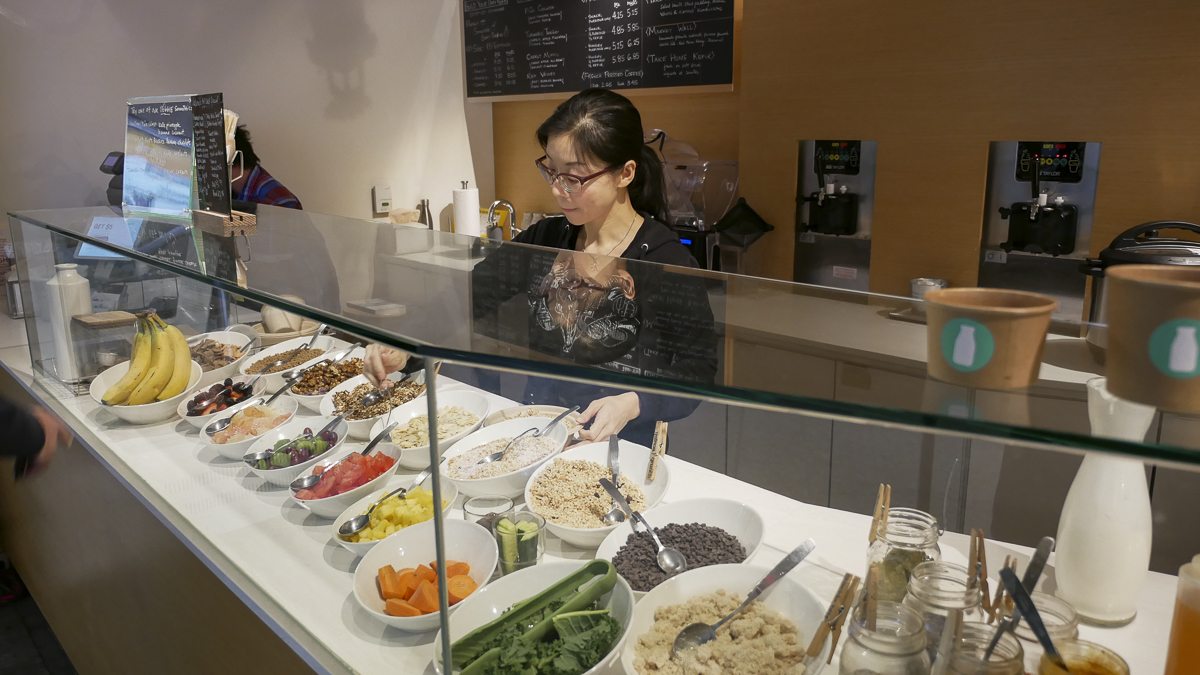 A longtime favourite in the PATH, DeKefir serves kefir bowls, smoothies and parfaits. 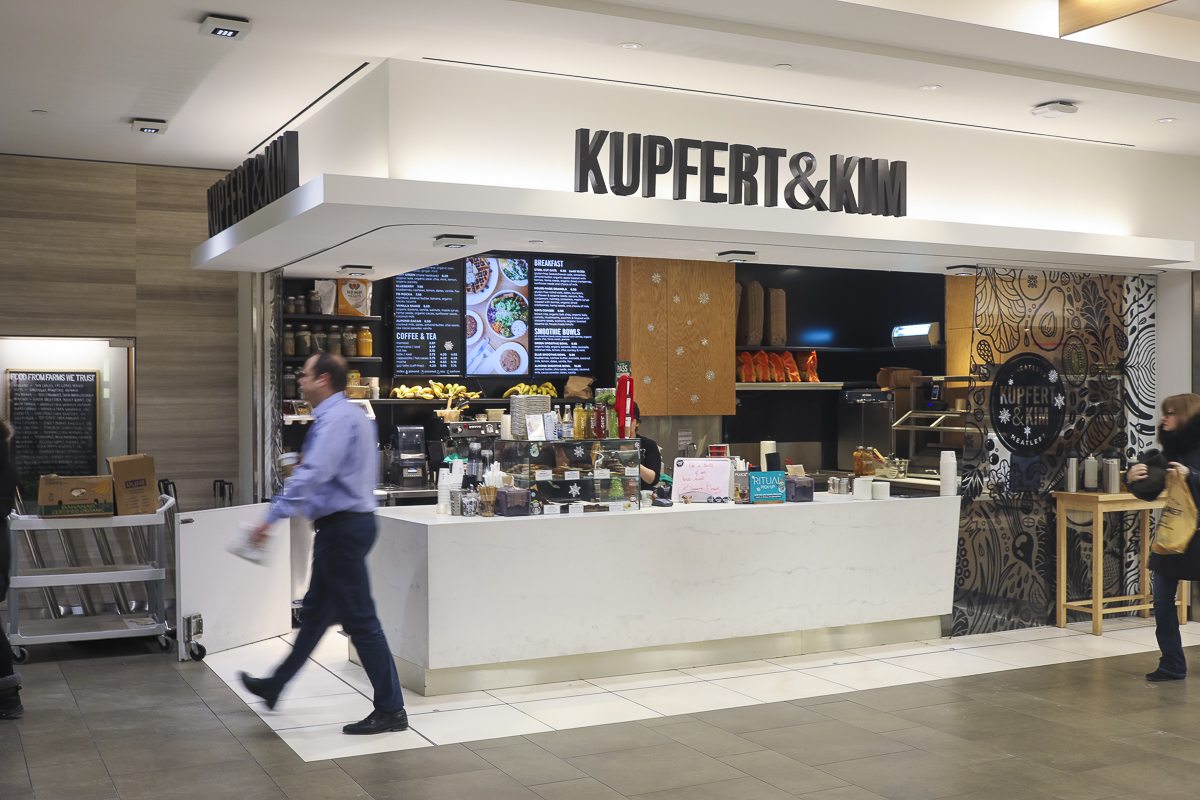 This vegan and gluten-free spot can be credited for sparking a (literal) underground health movement: today, there are six locations throughout the downtown core, five of which are accessible via the PATH.

Nearest intersection: Bay and Wellington.
What to order: While the smoothie bowls and house-made granola may be popular breakfast items, the kimchi-topped vegan congee is where it’s at. 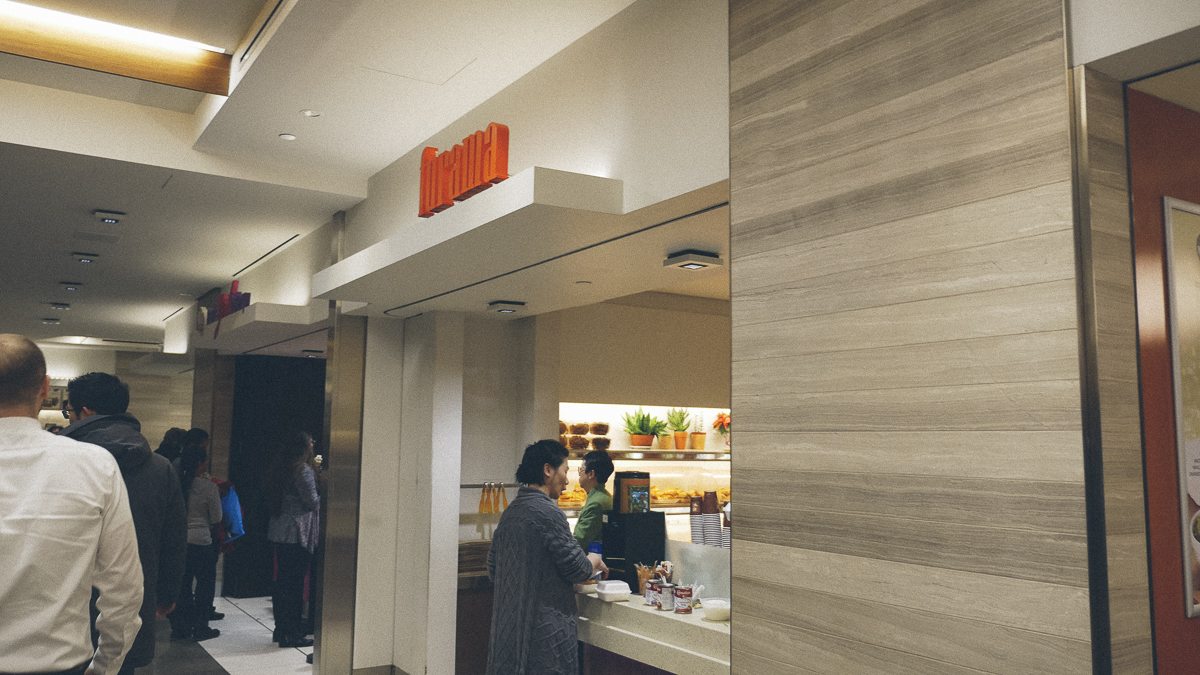 This popular Chinatown bakery recently opened up shop in the PATH, selling savoury meat buns and dim sum items. A rotating menu of stir-fry options are also available, and they are all excellent.

Nearest intersection: King and Bay.
What to order: Beef siu mai, shrimp dumplings or veggie spring rolls. If it’s something more substantial you’re after, get the barbecue pork rice. And for dessert: a warm red-bean pastry. 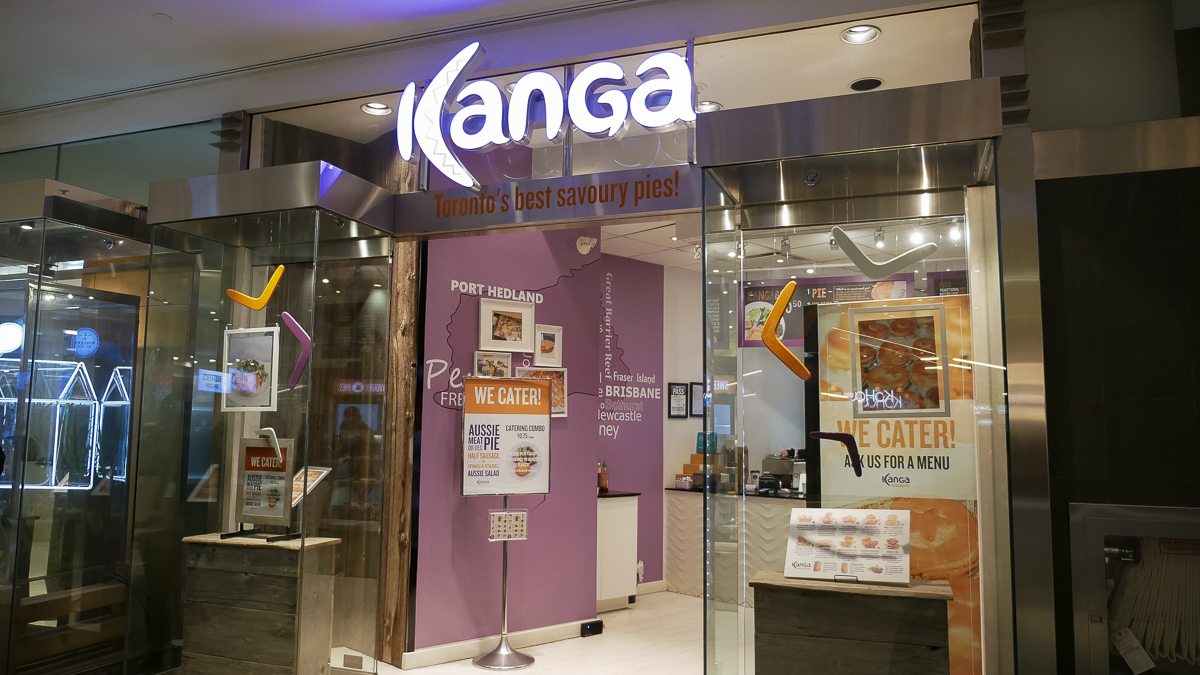 Nearest intersection: Yonge and Wellington.
What to order: The Pepper Steak Pie is the unsung hero of the menu, with chunks of steak drowned in a brown ale pepper sauce and stuffed in a flaky crust. For a vegetarian option, the Mate’s Masala Pie, stuffed with chickpea, eggplant and potato, is a winner. 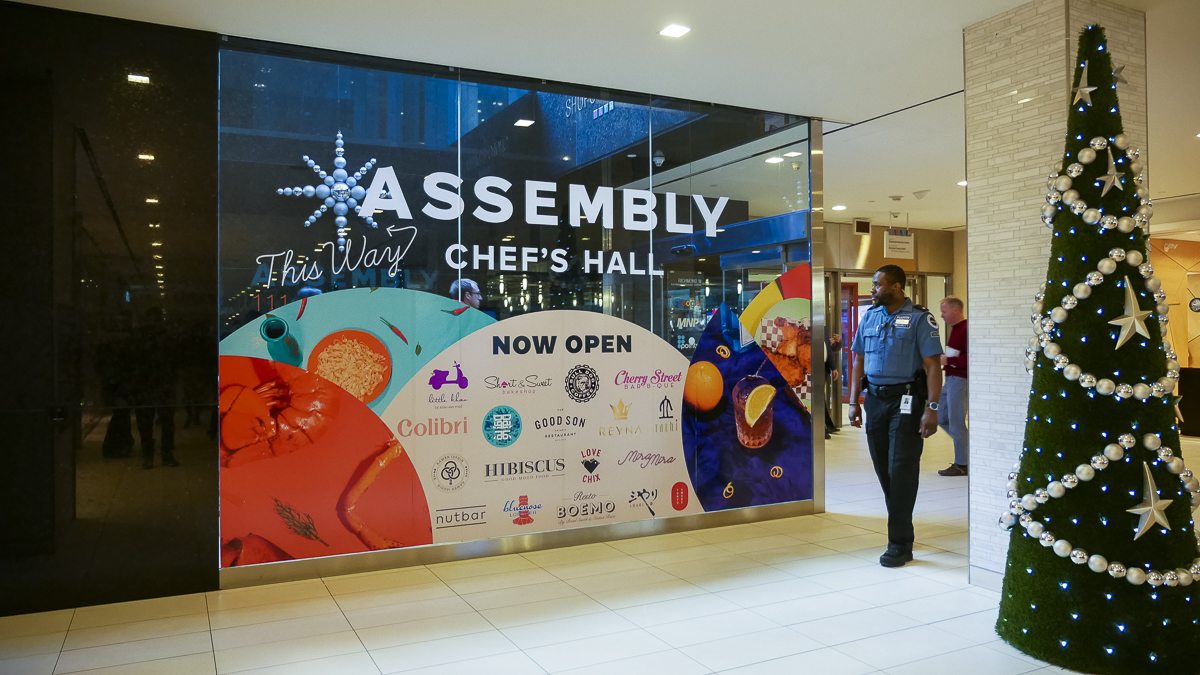 The much-anticipated food hall is now unofficially open. The fully licensed space features 18 vendors, each backed by a recognizable Toronto chef or restaurateur. Following the trend of gourmet food halls in Europe and the States, Assembly is aiming to refine fast-casual dining.

Nearest intersection: Richmond and York.
What to order: As far as food courts go in the PATH, Assembly wins the prize for best selection, hands down. There’s something for everyone: pork belly tacos, Texas barbecue, Nashville hot chicken, ramen, and more. We suggest visiting Boemo to try chef Ivana Raca’s gnocchi with chorizo and Peruvian peppers, or order brisket at Cherry Street Barbecue. 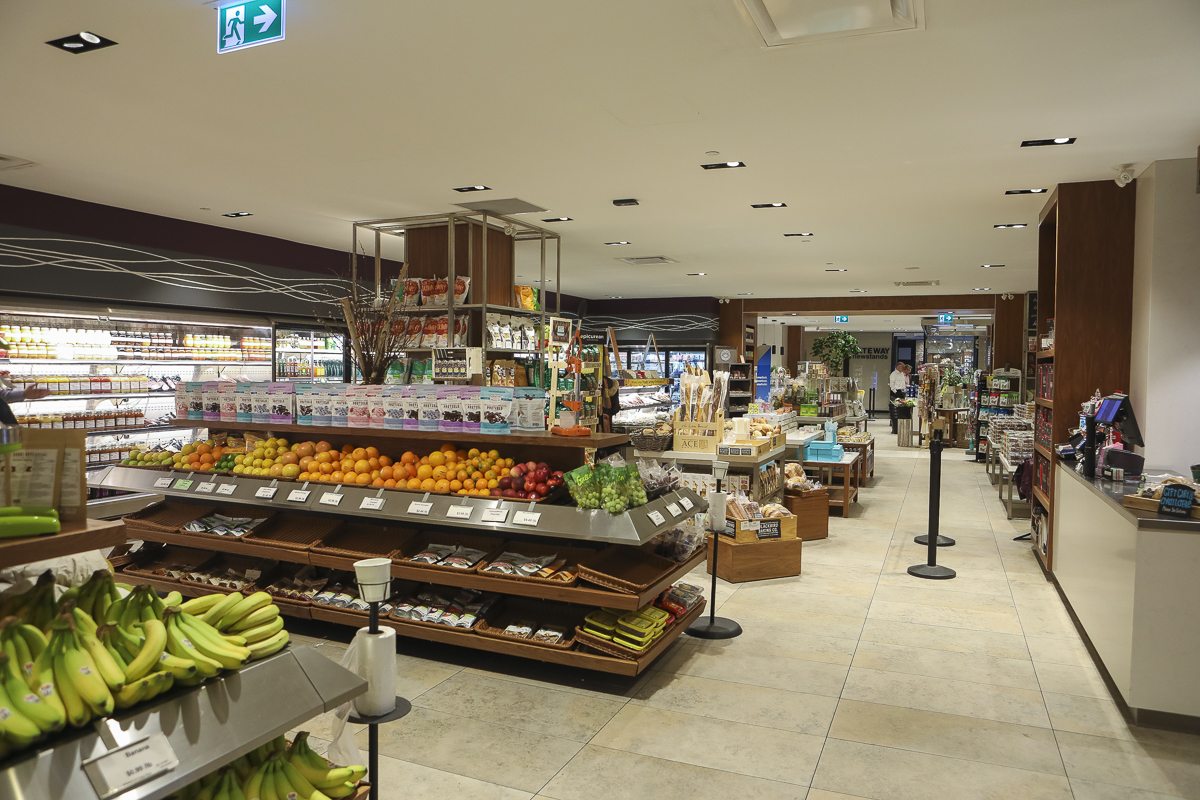 Mark McEwan’s gourmet grocery store in the TD tower packs a lot into its square footage: There’s a pantry chock full of local and imported ingredients, a sandwich counter and bakery, and—the best part—a 40-item hot-table that’s one of the best lunch buffets in the city. The menu changes daily and spans the globe, from Sri Lankan goat and pork curry to West Indian stewed oxtail. Food is measured by weight here, so you can get just a little or a whole lot, depending on how hungry you are.

Nearest Intersection: Bay and Wellington.
What to order: Start with a samosa or pakora, some basmati or flavoured rice, then load up on the curries and stews. Our favourites include the lemon chicken, Thai curry and jerk chicken. 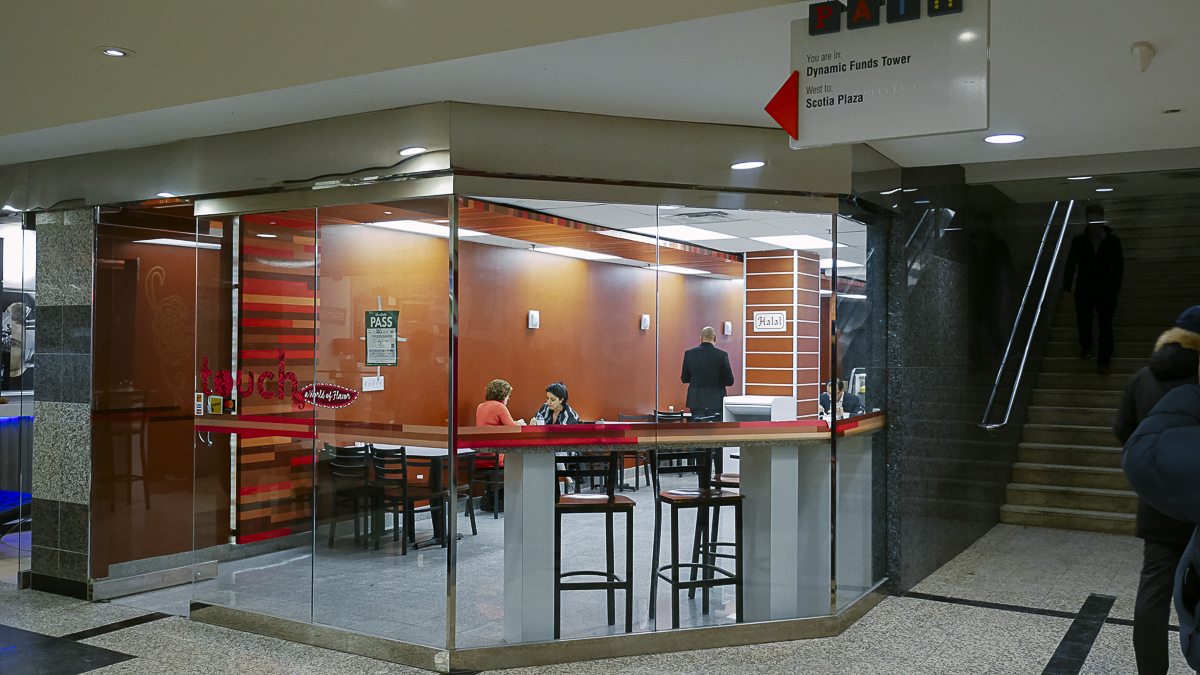 Tucked at the eastern edge of the PATH is this lunch counter gem, with some of the best Indian and Pakistani food in the core. It’s hard to find Touch, but definitely worth getting lost once (or five times) along the way.

Nearest intersection: Yonge and Adelaide.
What to order: The rotating hot counter features northern Indian and Pakistani curries and veg dishes. Highlights include the biryani, beef vindaloo and lamb curry. Need something to eat on-the-go? Try a cutty roll, skewered barbecued meat sandwiched between naan and doused with yogurt. 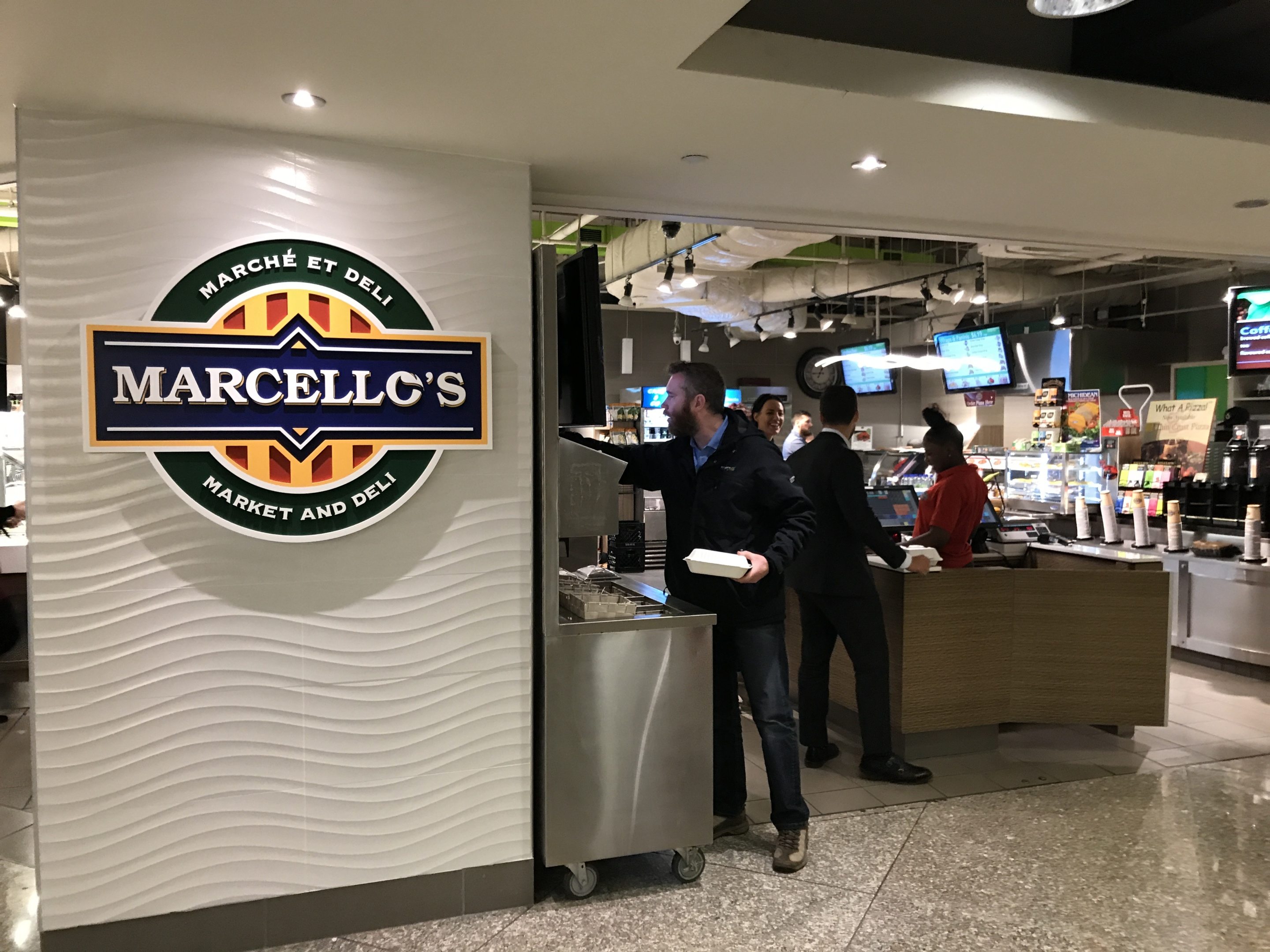 Marcello’s is a hot counter, deli, and produce shop, all in one.

Nearest intersection: University Ave and King Street.
What to order: Go on Thursdays to take advantage of the Caribbean lunch counter. Try the goat curry or jerk chicken wings. 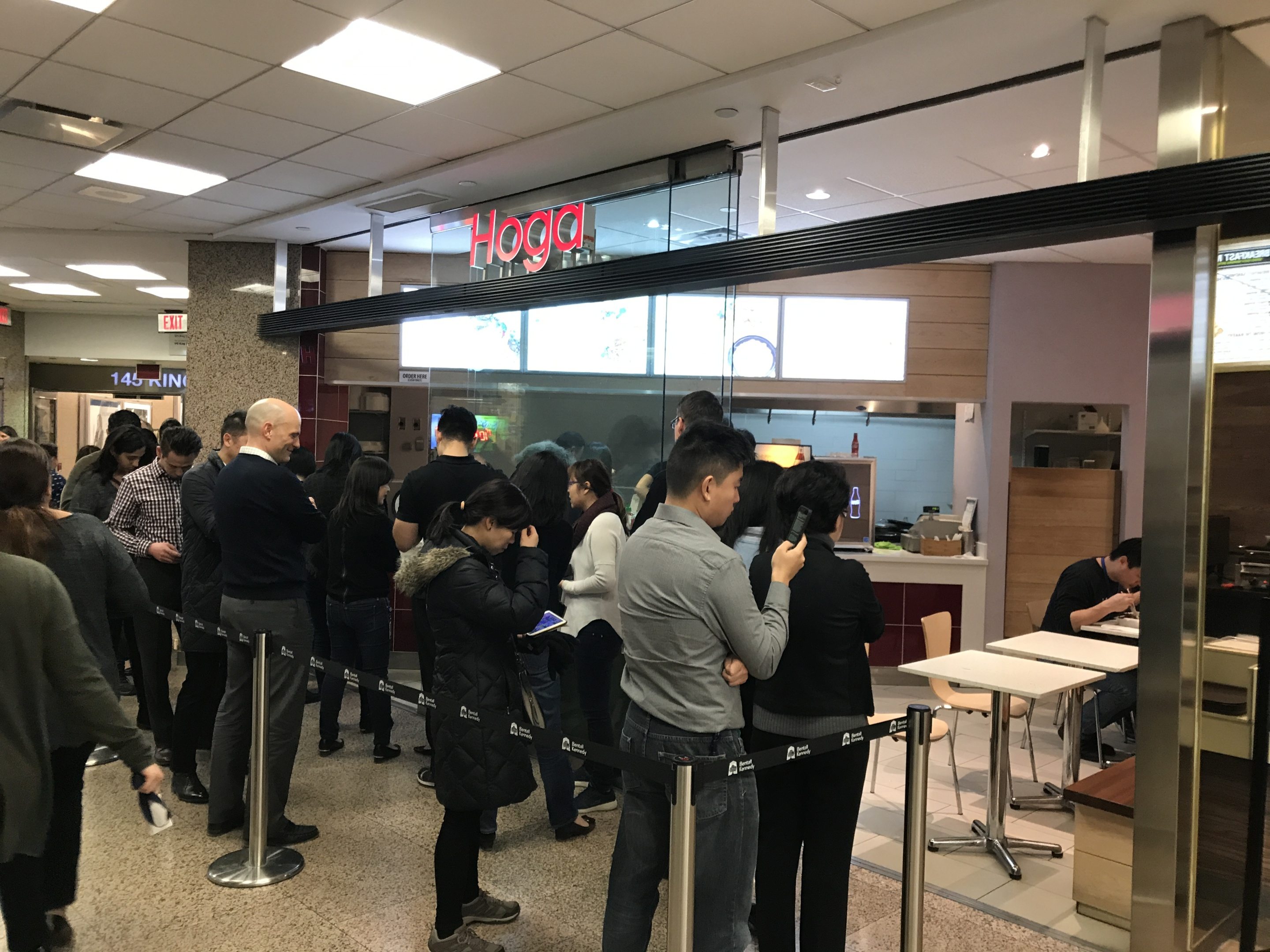 There aren’t a lot of Korean options in the PATH, so there’s always a lineup for HoGa’s consistently great lunch options.

Nearest intersection: King Street and York Street.
What to order: Try the chicken katsu with rice. Chicken cutlets are fried and served with a fried egg and kimchi. 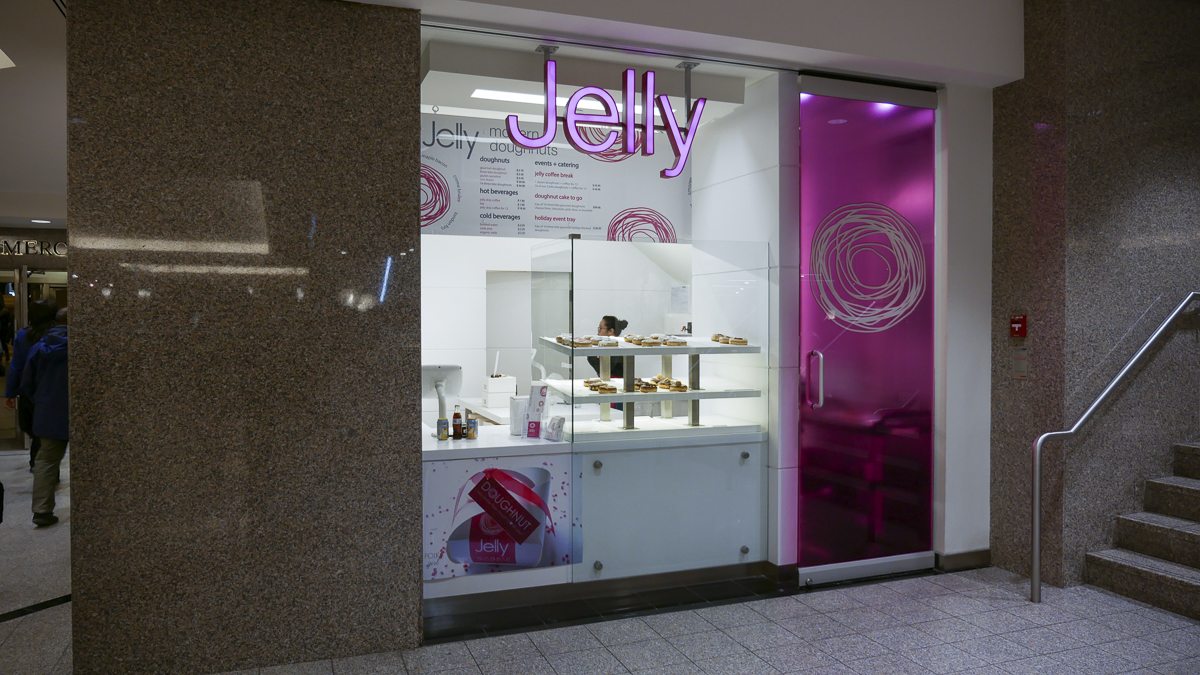 After opening a location on College Street, the Calgary-based doughnut chain opened a second store in Brookfield Place, with a rotating menu of regular-size and “one-bite” doughnuts.

Nearest intersection: Yonge and Wellington.
What to order: The Madagascar vanilla is your gateway doughnut. Start with that, then move on to the sweeter options like classic jelly or maple bacon.