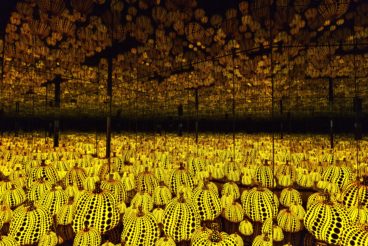 Mirrors, mirrors on the wall

Yayoi Kusama has been creating art since the mid-20th century, but it’s now, just as the Japanese artist is about to turn 89, that she’s at the peak of her career. Her striking works, created long before Instagram, seem tailor-made for today’s selfie generation. Inside her Infinity Mirror Rooms, reflective walls turn simple collections of sculptures and lights into never-ending pumpkin patches and awe-inspiring glimpses of the cosmos. Here, a look at some of the kaleidoscopic chambers, paintings and sculptures on display at the AGO from March 3 to May 27 as part of the gallery’s colossal Kusama retrospective, Infinity Mirrors.

As a young woman in Japan, Kusama experienced hallucinations and attempted to recreate them through watercolour paintings like this one. She had several gallery shows in Japan, but she dreamed of leaving her home country’s conversative art world to participate in the avant-garde explosion in the U.S. She even mailed a number of her works to Georgia O’Keeffe. Eventually, Kusama showed her work in Seattle, and later settled in New York. When she left Japan, she burned nearly 1,000 watercolours—a gesture that was both practical (she couldn’t bring them all) and symbolic (she wanted to start anew).

In New York, Kusama began creating soft sculptures out of sewn, cotton-stuffed fabrics. Her goal was to immerse audiences in a sea of sculptures, so she experimented with mirrors to multiply her creations endlessly, giving birth to her first Infinity Room, Phalli’s Field. The phallic forms are an expression of her fear of sex. 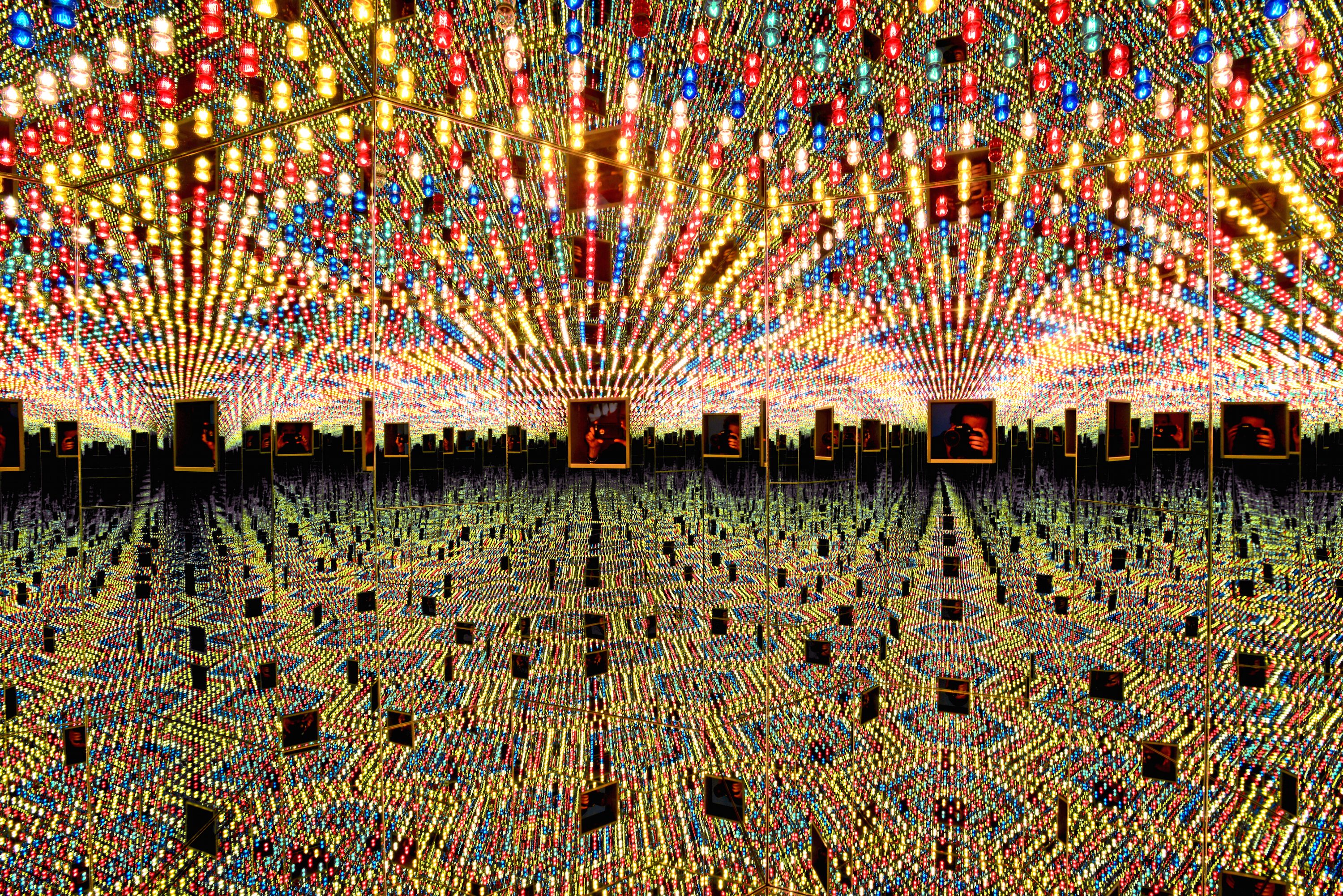 One of Kusama’s most psychedelic works is Love Forever, an incandescent Infinity Mirror Room inspired by the free-love, antiwar and civil-rights movements of the 1960s. Instead of entering the room, viewers peer in through two peepholes on opposite ends of the trippy hexagonal chamber. The lights inside turn on and off to create different patterns: 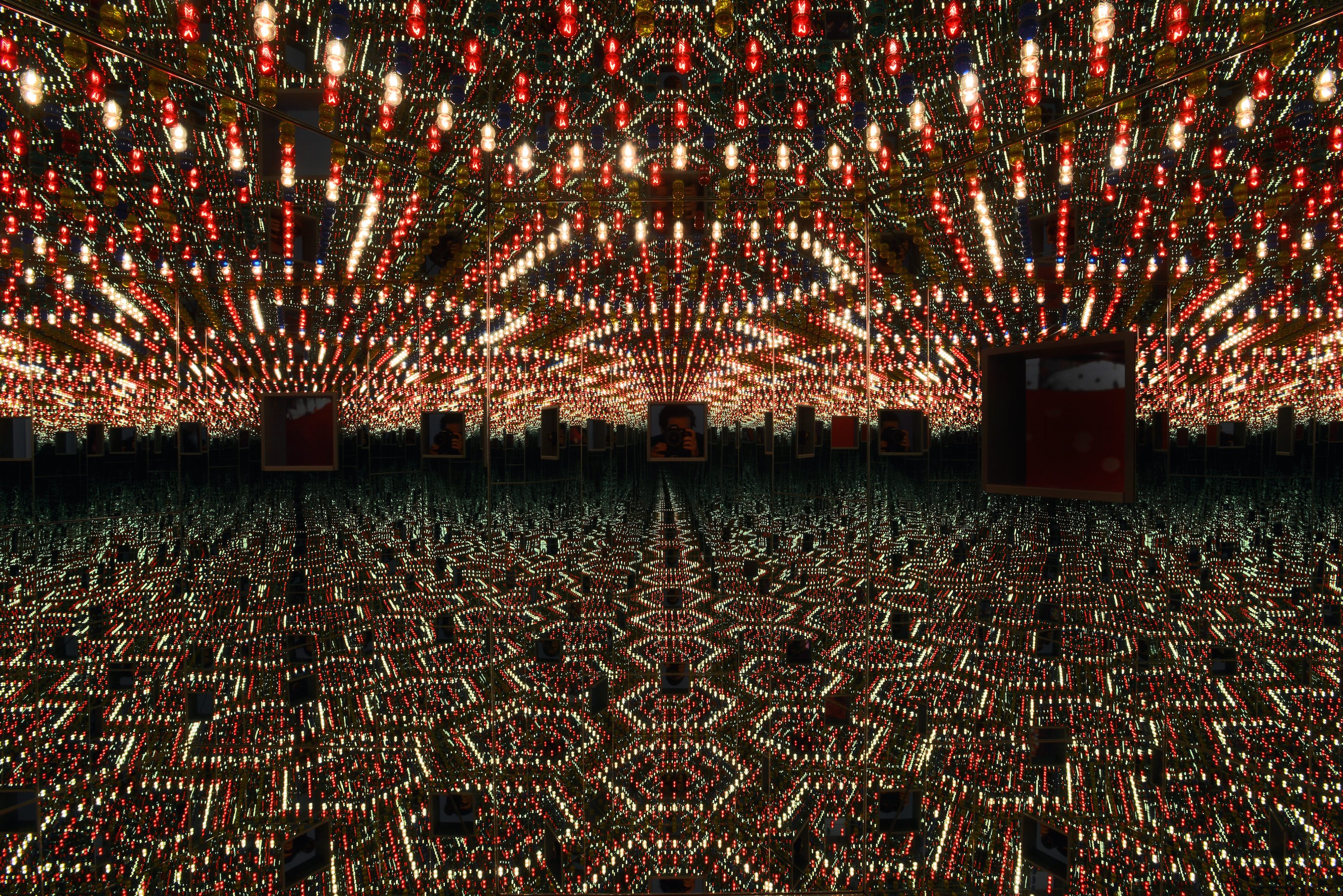 In 1973, Kusama returned to Japan and focused more heavily on poetry, fiction and paper collages like this one. She constructed a number of them from materials and papers she was given by the artist Joseph Cornell, a close friend and collaborator in New York. 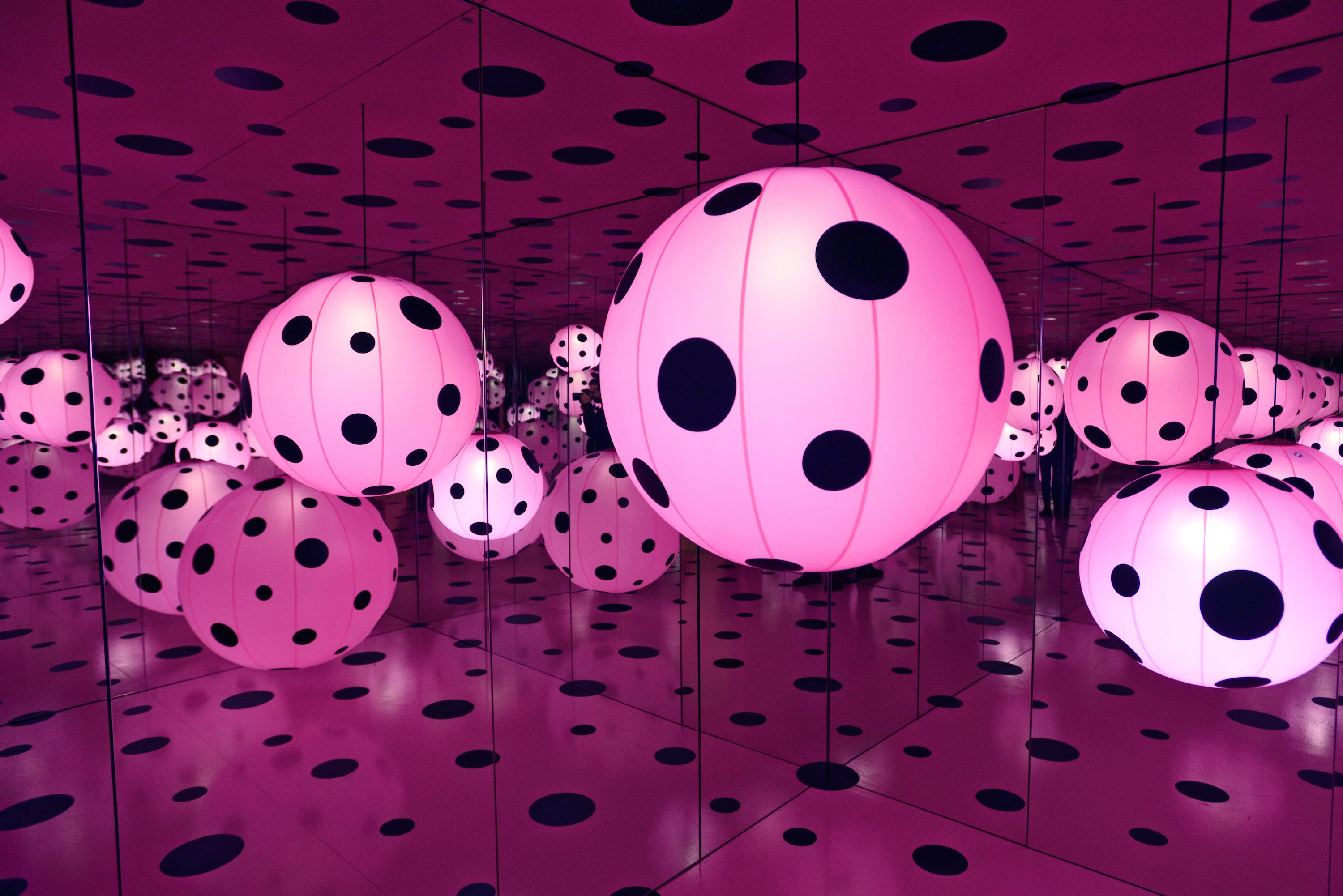 Kusama is obsessed with polka dots. To her, a dot symbolizes life, because of its resemblance to a nucleus, or a small, single existence in an infinite universe. Dots dominate this room, filled with pink lantern-like balloons. The work includes a projection of Kusama singing an original poem about suicide, a stark contrast to the vibrant whimsy of Dots Obsession. 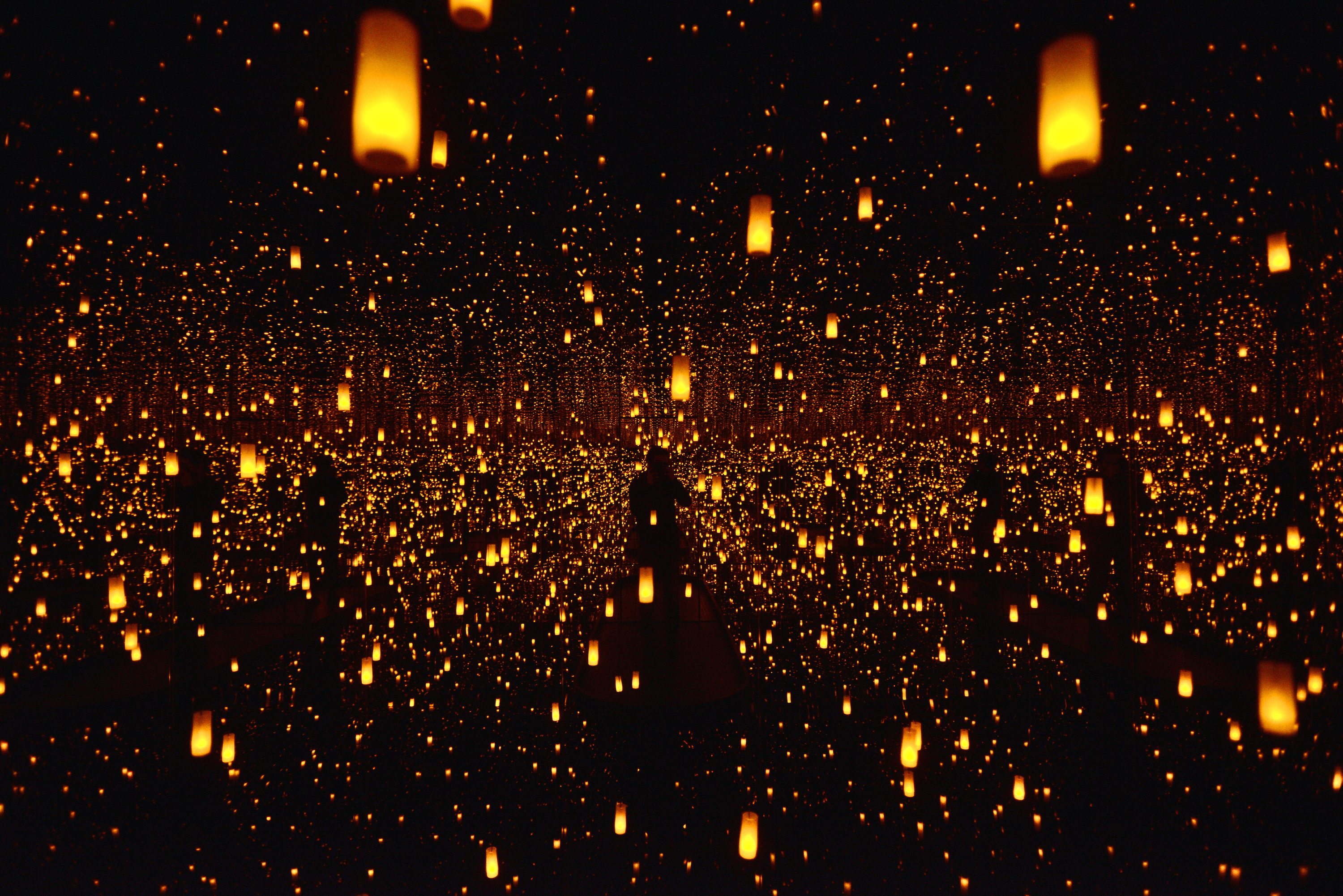 Aftermath of Obliteration of Eternity, 2009

The flickering LEDs inside this room reference toro nagashi, a Japanese ceremony in which paper lanterns float downstream to guide ancestral spirits to their resting place. 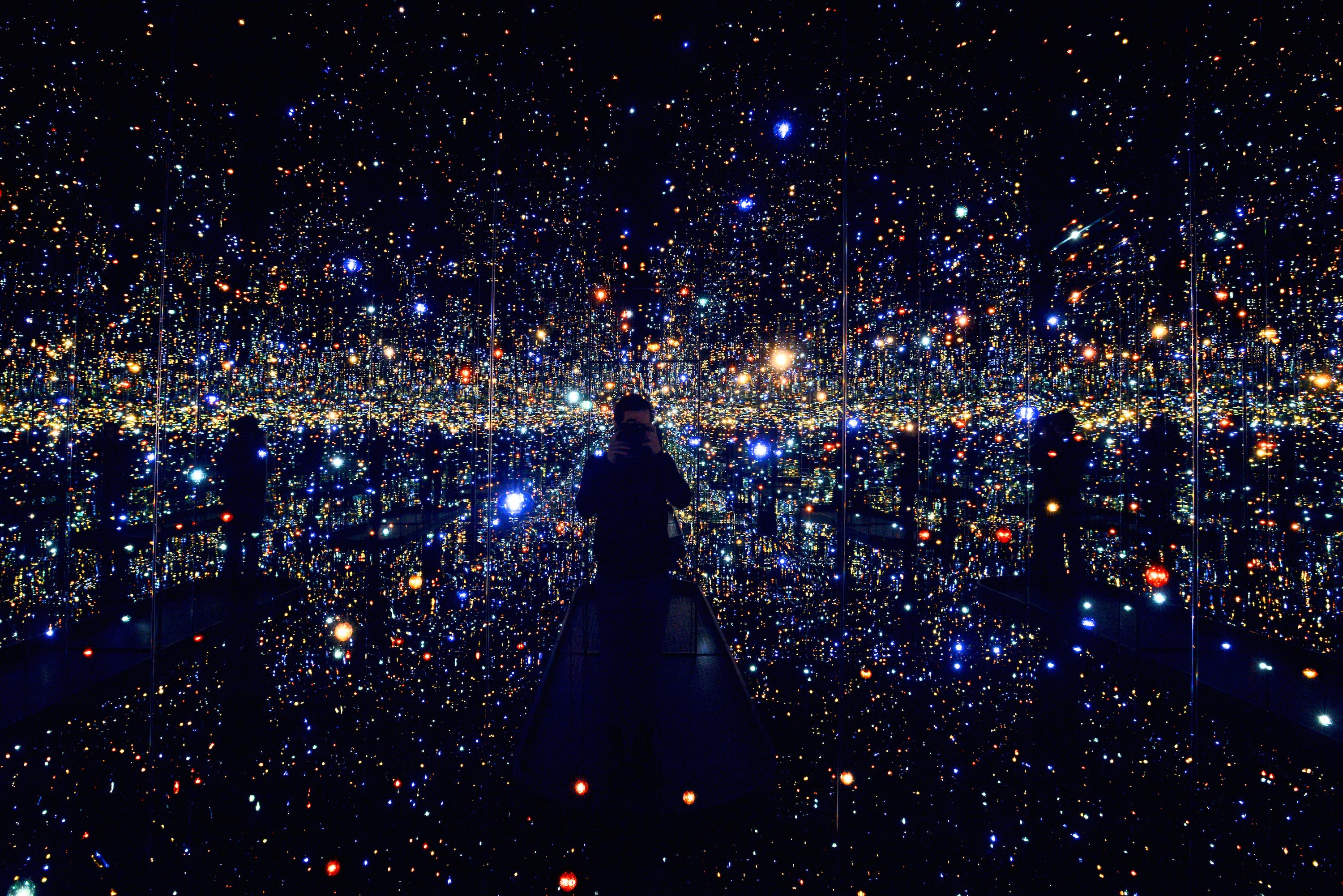 The Souls of Millions of Light Years Away, 2013

Kusama always thinks about the cosmos as she begins painting on canvases. She evokes outer space with this room, which reflects acrylic bulbs to create a starry night sky. 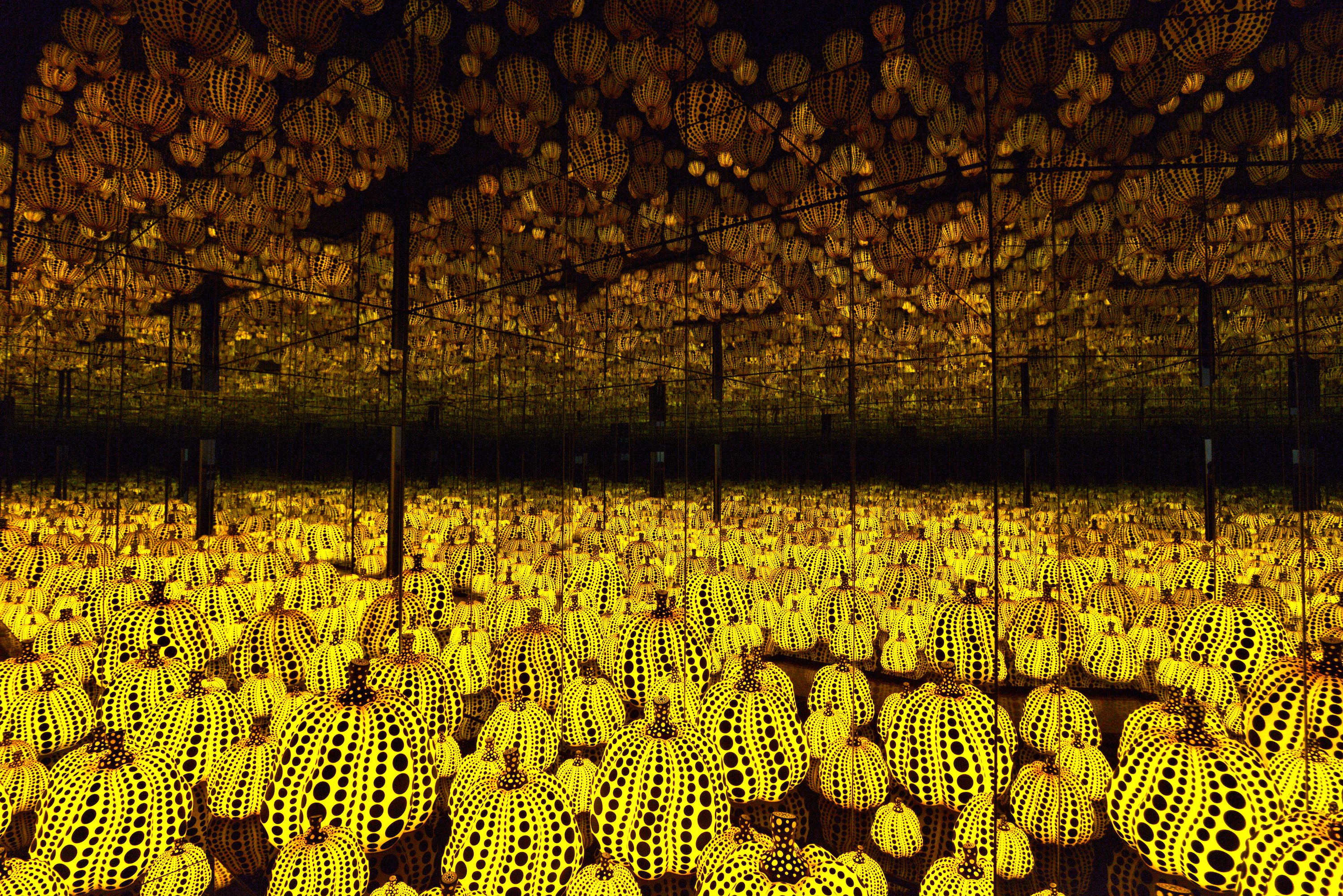 All the Eternal Love I Have for the Pumpkins, 2016

Kusama filled this room with soft sculptures of a type of pumpkin native to Japan. It’s a tender gesture of affection for the natural world, with a subtle environmentalist message. At the AGO, visitors won’t be allowed to use cameras in this room, as a way of forcing them to relish the moment instead of stressing to get the perfect selfie.

Every day, Kusama rises at 9 a.m., paints in her Tokyo studio until sundown and then goes to bed. Many of her recent canvases (she’s produced hundreds like the ones hanging behind her in this photo) have playful titles, such as I Who Have Taken an Antidepressant. 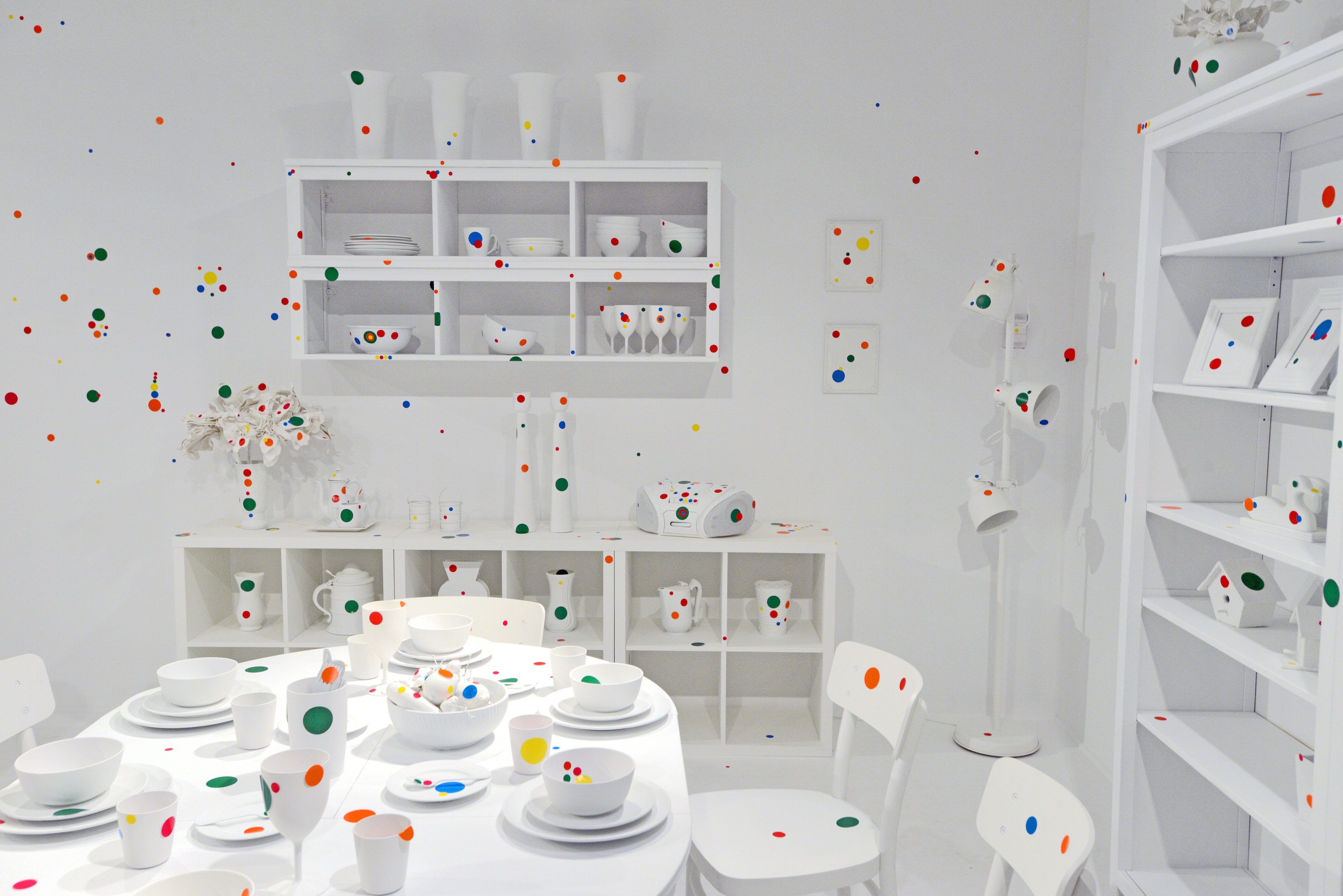 Each of the five North American galleries and museums hosting the Infinity Mirrors tour has its own Obliteration Room. It begins as a stark white chamber, and as visitors pass through, they place dot-shaped stickers where they please. As a nod to Toronto’s obsession with patios, the Obliteration Room created for the AGO will have a backyard deck with Muskoka chairs, a firepit and a cooler.