A play for Potterheads, a Pup concert and seven other things to do this week

A play for Potterheads, a Pup concert and seven other things to do this week

Potted Potter, a magical marathon
The Boy Who Lived inspired millions of superfans to camp outside bookstores and stay up all night reading. But what about the mere muggles among us? This high-energy parody is a crash course in Harry Potter, knocking out all seven novels in just 70 minutes and serving up enough info about Quidditch and horcruxes to contend with even the most devoted diehards. Thursday, December 15 to Saturday, December 31. $30–$100. Panasonic Theatre, 651 Yonge St., mirvish.com.

The razzle-dazzle tricks of the The Illusionists
We’ve all seen a birthday party hack pull a rabbit from a hat—what we want is a little razzle-dazzle. The seven members of The Illusionists deliver showmanship in spades. They have wowed judges on America’s Got Talent with enough music, acrobatics, theatrics and, of course, magic to make Gob Bluth seethe with envy. Tuesday, December 13 to Saturday, January 7. $49–$130. Princess of Wales Theatre, 300 King St. W., mirvish.com.

Three nights of Pup’s manic punk rock
The thrashing energy, catchy beats and self-effacing humour of Pup’s 2013 self-titled debut made the Toronto punk rockers among the indie world’s buzziest new bands. Their manic follow-up, The Dream Is Over, is best experienced live—fans can howl along and marvel at the (very sweaty) chemistry between boyhood pals made good. Wednesday, December 14 to Friday, December 16. $23.50–$28.50. Danforth Music Hall, 147 Danforth Ave., ticketmaster.ca.

The Gryphon Trio’s greatest hits
A local favourite for their meticulous musicianship, adventurous programming and commissioning of new works, this chamber ensemble has put together a program that is practically a précis of their 20-year history. There’s a decade-old contemporary piece, a Brahms trio, Schoenberg’s Verklärte Nacht (that very last gasp of musical romanticism) and, to bring matters up to the minute, a selection from the Young Composers Program at Earl Haig Secondary School. Thursday, December 15. $50–$55. St. Lawrence Centre for the Arts, 27 Front St. E., musictoronto.com.

A skate on downtown Toronto’s new rink
Local tech start-up Usful is turning Arnell Plaza, the Bay Adelaide Centre’s courtyard, into a winter wonderland. The show-stopper is a pop-up skating rink in the centre of the plaza, open daily until 3 p.m., and vendors like Forno Cultura and Maison Apothecare will be selling treats and stocking stuffers. Tuesday, December 13 to Thursday, December 15. Free. Bay Adelaide Centre, 333 Bay St., eventbrite.ca. 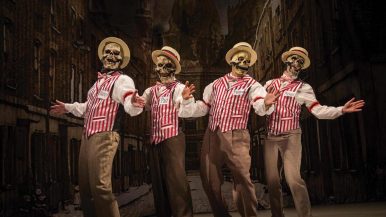