A Kanye West concert, Fan Expo and seven other things to do this week

A Kanye West concert, Fan Expo and seven other things to do this week

The best and worst of Yeezy
Being a Kanye fan is tough. There are his grandstanding tweets, his tantrums and his award-show stunts to deal with. His latest opus, The Life of Pablo, didn’t help: it’s an overstuffed, deeply narcissistic yet wildly ambitious album that showed Yeezy at both his best and his worst. This concert, part of his Saint Pablo Tour (yes, Saint Pablo), will unleash the same mix of undeniable talent and awe-inspiring awfulness. Tuesday, August 30 and Wednesday, August 31. $29.50–$220. Air Canada Centre, 40 Bay St., ticketmaster.ca.

Walk Off the Earth’s quirky indie-pop
The Canadian quintet came to fame for their viral YouTube cover of Gotye’s “Somebody That I Used to Know,” and their vibe of just being friends goofing off gives their concert appearances an everything-but-the-kitchen-sink energy: they’ve been known to pepper their music with ukulele, mandolin, banjo and even the sound of an electric toothbrush. Sunday, September 4. Free with CNE admission. CNE Bandshell, theex.com.

A bubbly Meghan Trainor set
The cheeky runaway hit “All About That Bass” established Trainor as defiantly un-hip but incredibly charming songstress. Her sophomore album, Thank You, treads fiercer waters: the slick single “Me Too,” above, features a juicy bass line à la Iggy Azalea’s “Fancy” and a polished chorus that would feel at home on a Katy Perry or Lady Gaga record. On this tour, she enlists all the conventional diva accoutrements: an army of backup dancers and LED screens. Tuesday, August 30. $34–$74. Molson Amphitheatre, 909 Lake Shore Blvd. W., ticketmaster.ca.

A play in a freight container
The Container isn’t for the claustrophobic. U.K. playwright Clare Bayley’s weighty production—which sold out its SummerWorks debut two years ago—takes place in a dark, sealed freight container for an audience of two dozen and follows five illegal immigrants on their way to England. The sit is simple, but as the characters swap stories and ration resources, the intricate plot becomes only more riveting. Sunday, September 4 to Sunday, September 18. $25–$44. Berkeley Street Theatre Courtyard, 26 Berkeley St., canadianstage.com.

The thousand zany talents of Buskerfest
Jugglers, magicians, fire swallowers, guys on stilts…sure, you may see any or all of these during an average stroll through the park, but at Buskerfest they’ll be seasoned (and highly entertaining) professionals. More than 100 buskers will be hoofin’ it for your amusement at Toronto’s annual celebration of street performance, which this year moves to Woodbine Park for the first time. Admission is by donation; proceeds will go to Epilepsy Toronto. Friday, September 2 to Monday, September 5. Woodbine Park, 1695 Queen St. E., torontobuskerfest.com.

Toronto's best events in your inbox 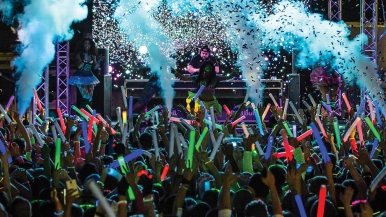