As a kid, Ekow Nimako spent hours clicking together Lego bricks to recreate characters from his favourite comic books and TV shows. Six years ago, after he was laid off from his job as an editor and writer, Nimako was scrolling through Craigslist and came across an ad from a family looking to get rid of their Lego,  and he thought it might be fun to start building again. This time, he wanted to make sculptures inspired by his Ghanaian heritage instead of the white superheroes he looked to for inspiration when he was younger. “A lot of my work portrays black children. There’s something magical about that time in your life, before the ills of the world works its mischief and changes your outlook,” he says.

From his home studio in Leslieville, he makes mythical creatures, some several feet tall, from exclusively black Lego pieces. Here’s a look at some of his favourite creations. 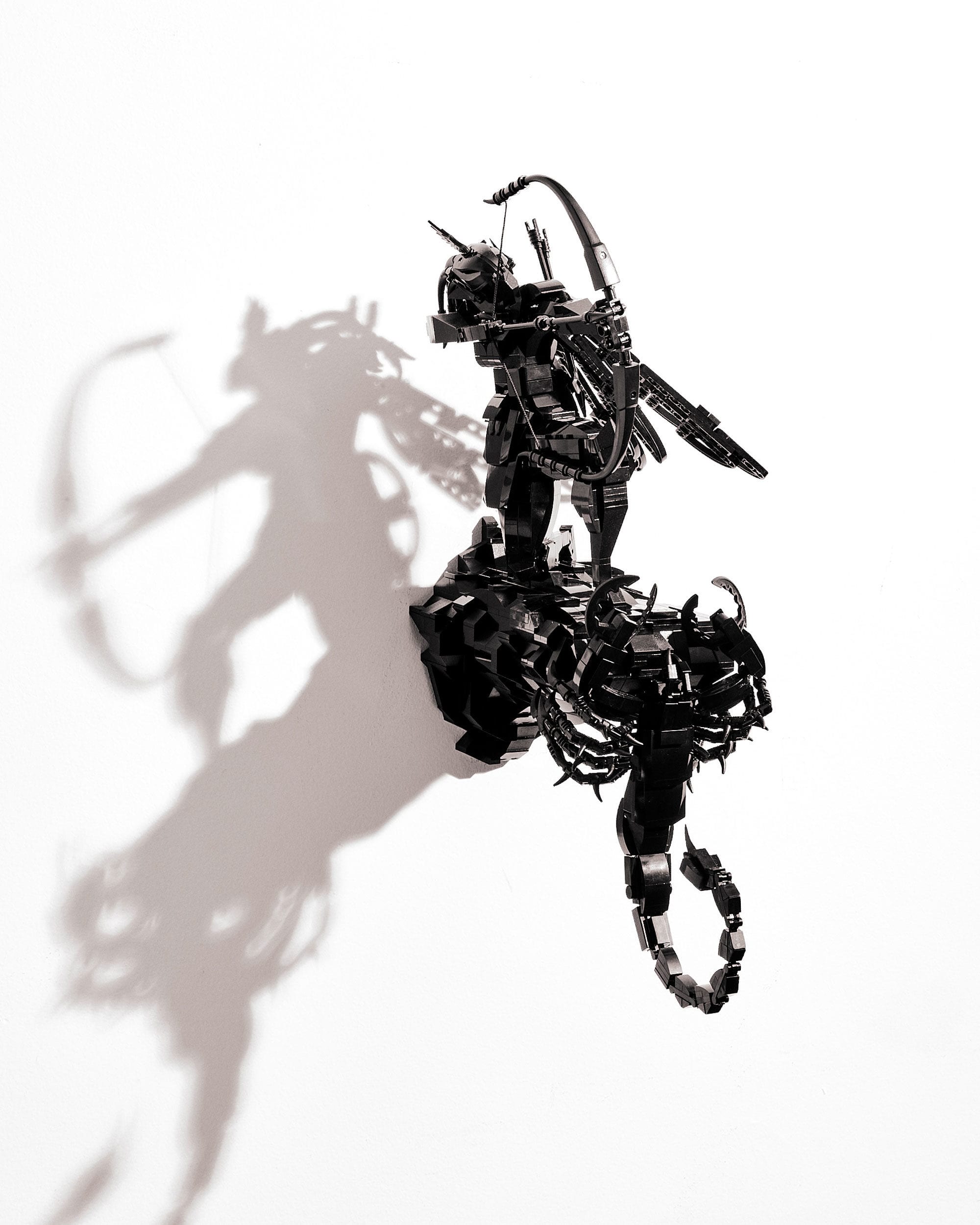 The title of this piece—”Fear the venom not the sting”—was inspired by a Ghanaian proverb. Nimako wants his sculptures to fight the negative stereotypes about African people. “You don’t see images of Africa where people are thriving, it’s all poverty and disease-stricken children,” he says. “When I started creating these melanin-rich mythological creatures, I wanted to portray power and resistance, similar to the Ashanti wars, where the Ghanaians wiped out the British.” 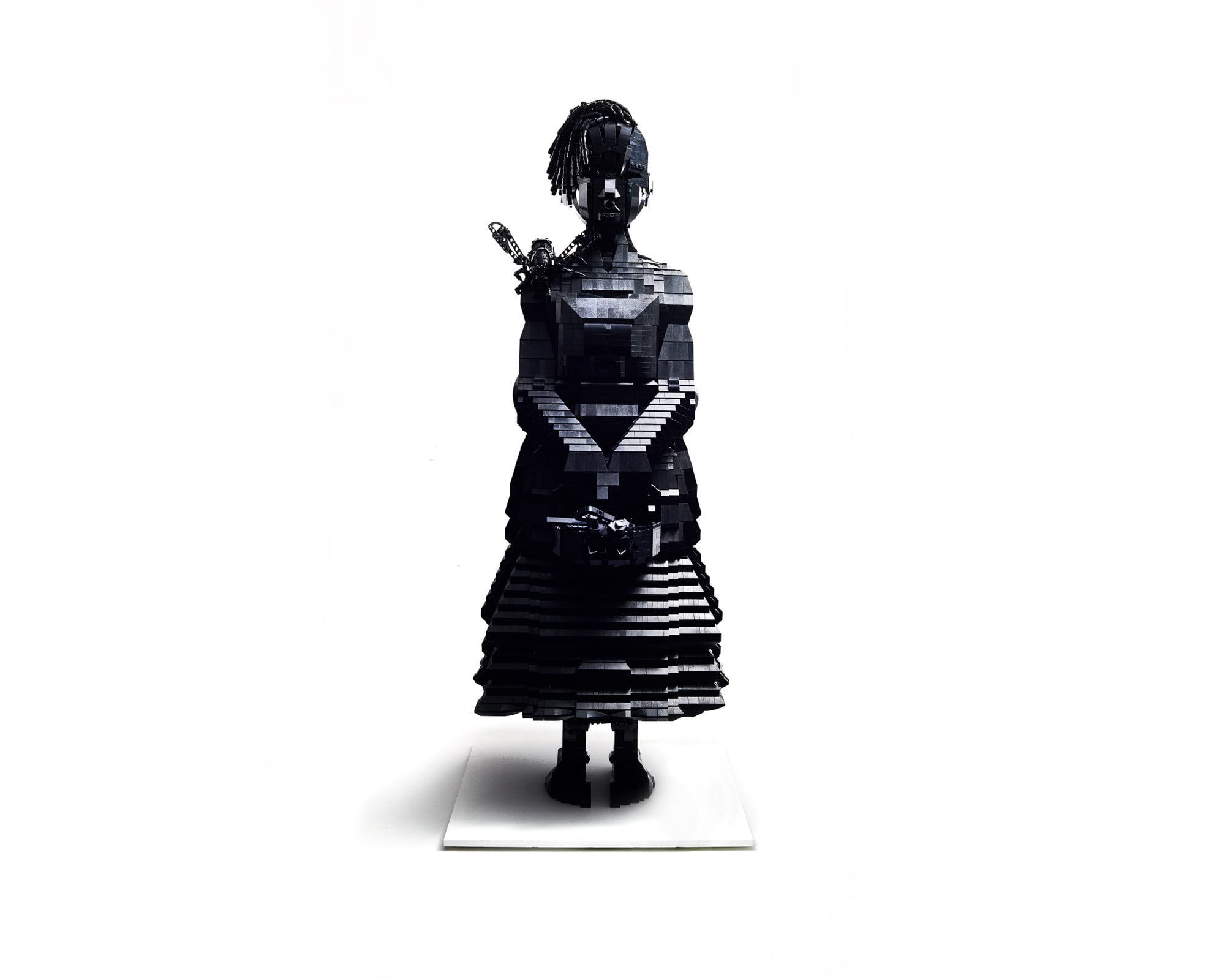 Nimako has been working on this sculpture, titled “To feed the village the young must grow,” since 2014. He spent more than 280 hours changing its shape and size, and whenever Lego comes out with a new piece he thinks might fit, he’ll change it again. “That’s one of the great aspects of using Lego,” he says. “Anything I create can be undone, so I can always improve.” Influenced by Philip Pullman’s The Golden Compass, where an 11-year-old girl and her polar bear companion journey to the North Pole, Nimako incorporates animals into most of his sculptures of children. The girl in this piece has a honeybee on her shoulder, to represent the role children play in nature and their communities. 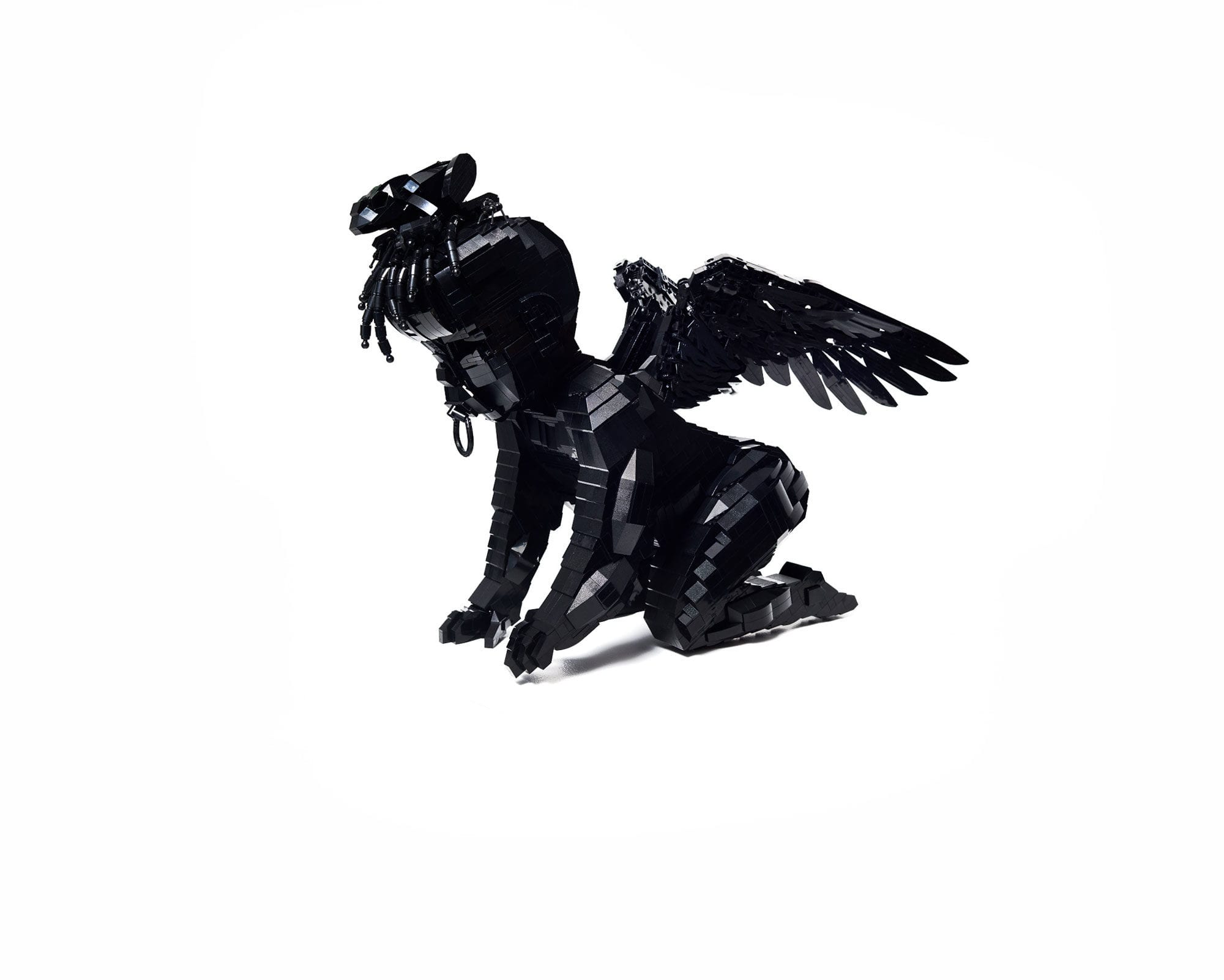 This piece, “If a bird does not fly it goes to bed hungry,” took 137 hours to complete. It was inspired by Píntame Angelitos Negros, a poem by the Venezuelan writer Andrés Eloy Blanco Meaño about entering churches in search of angels, only to find ones with white skin. Nimako first heard the poem a few years ago, and its message stuck with him. “I need to make art that reflects me and people who look like me.” 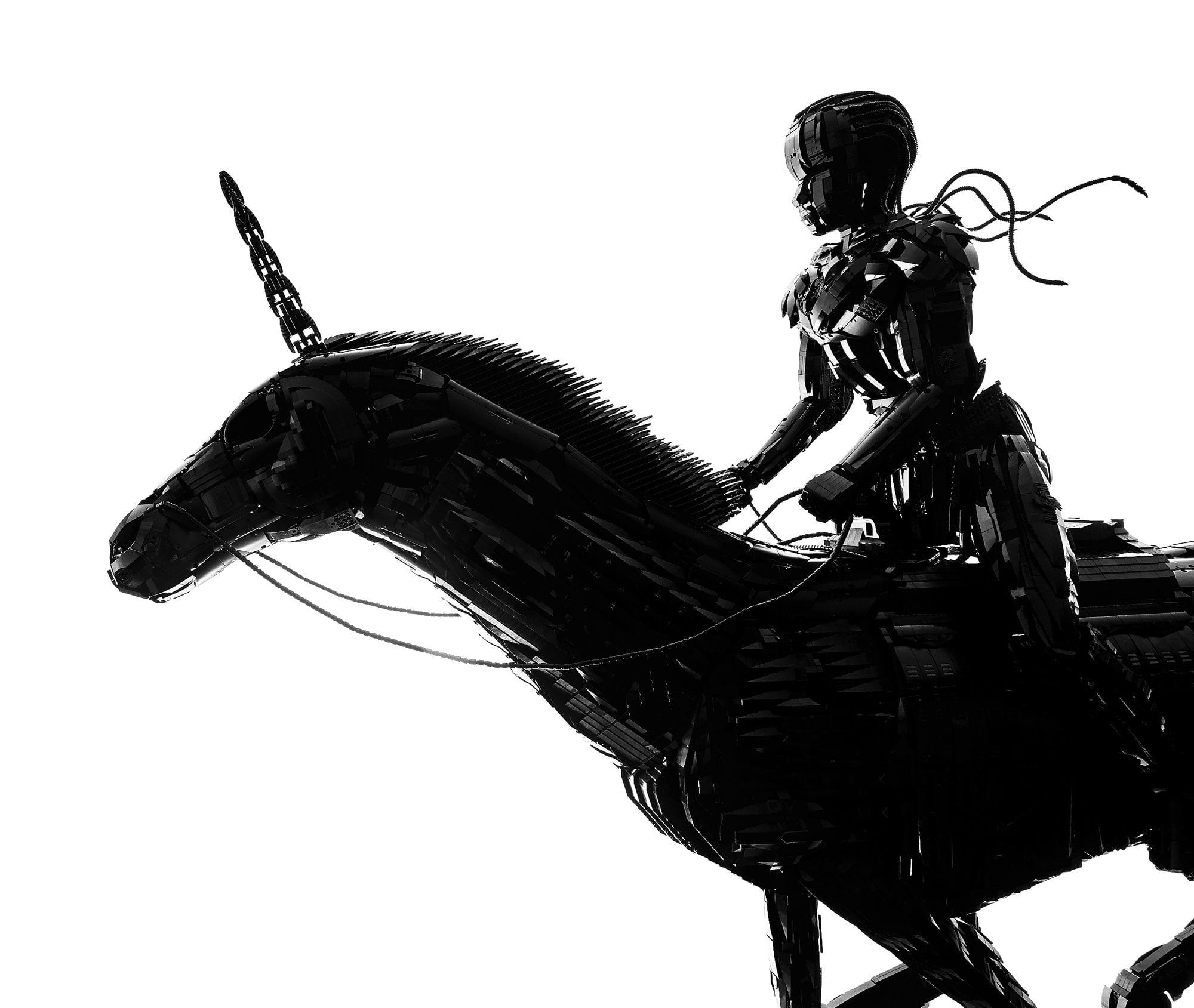 Eight feet long and comprised of over 80,000 Lego pieces, Cavalier Noir (which translates to “Black Rider”) is Nimako’s biggest project to date. It took him over 700 hours to complete, and was inspired by conversations with Canadian film and music producer Director X, who’s known for his work with artists like Drake, Rihanna and Kanye West. “We have a lot in common,” said Nimako. “We’re both fascinated by mythological creatures and we’ve talked a lot about the lack of monuments dedicated to black heroes.” His solution was to create his own. Cavalier Noir was featured in this year’s Nuit Blanche. 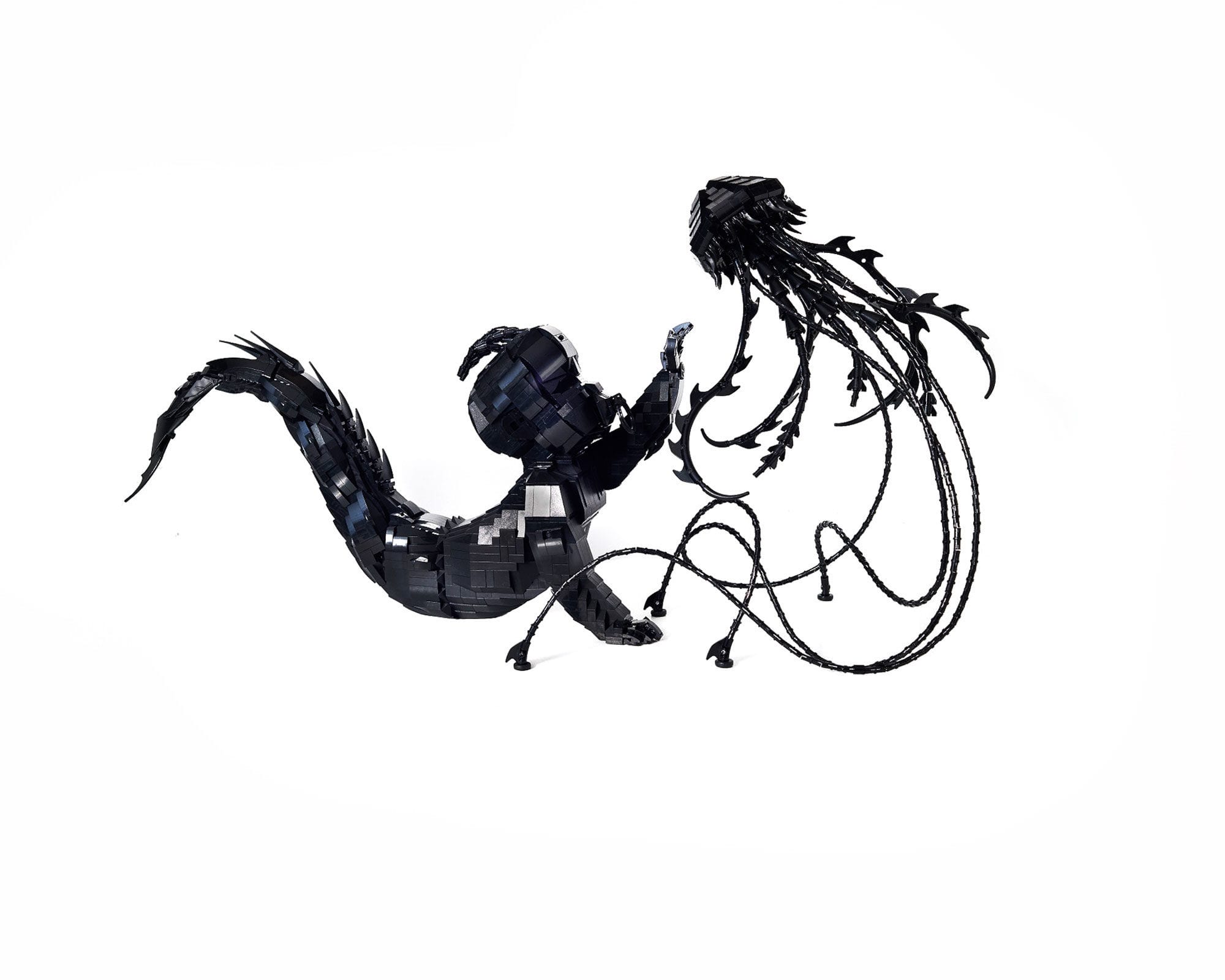 This sculpture, titled “You do not punish a fish by throwing it in water,” was inspired by another Ghanaian proverb. It depicts a mythological merchild reaching up with naivety towards a menacing creature. “When you see the child reaching for this dangerous creature, you wonder what is going to happen,” he says. This piece took 137 hours to complete.