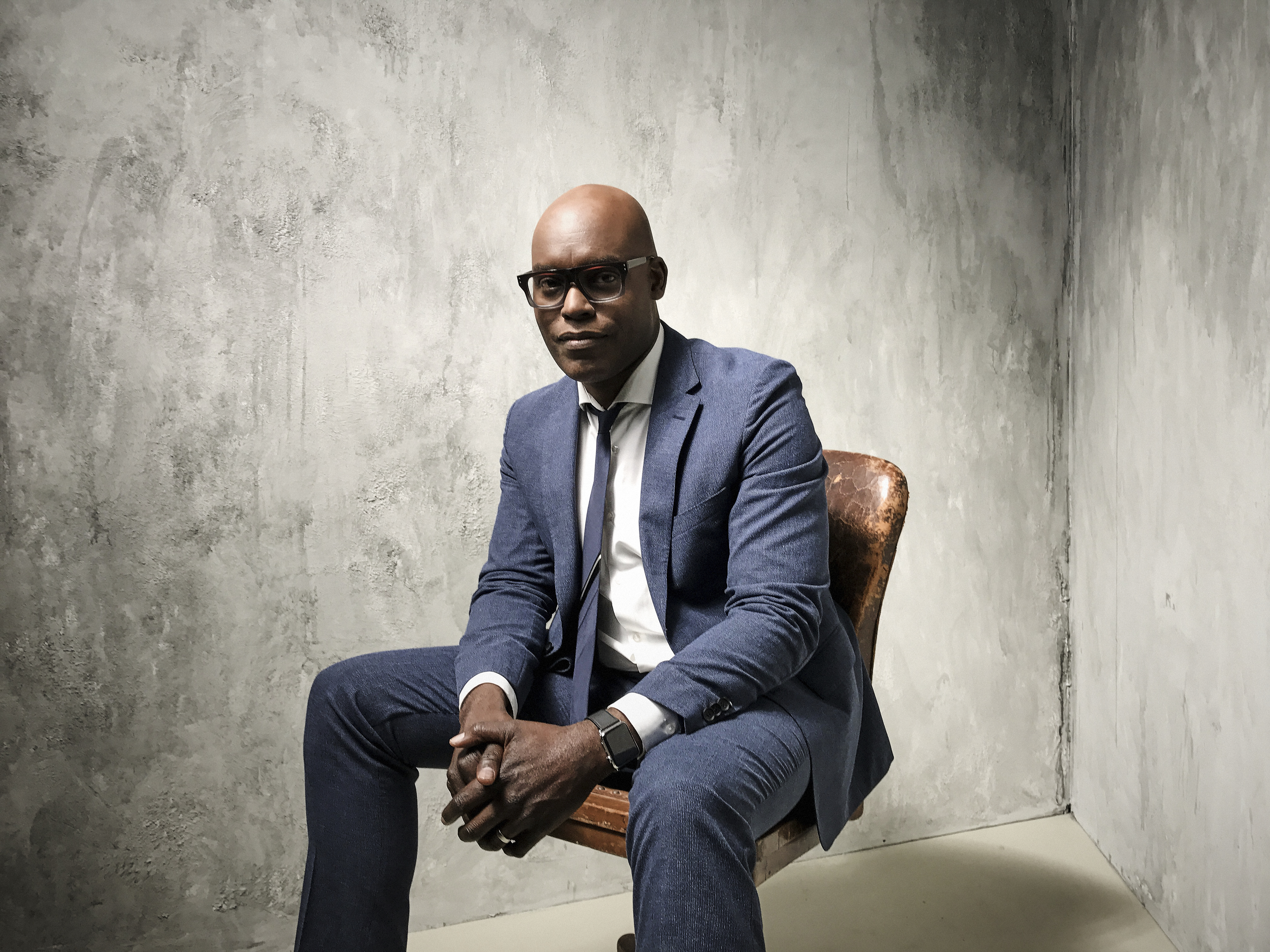 After running almost entirely virtual last fall, this year’s Toronto International Film Festival will look more like TIFFs past: Think major movie premieres, star studded red carpets and IRL theatre audiences* (*at a government mandated 50-per-cent capacity). TIFF co-head and artistic director Cameron Bailey describes the 2021 version as a hybrid, and all attendees will have to provide proof of vaccination or a recent negative Covid test and mask up in theatres (sorry—no popcorn). We spoke to Bailey about selecting the perfect Covid-era opening night movie, which celebs you might see downtown and the plan for managing anti-vaxx protesters (turns out they’re not unlike Brangelina fans).

Last year the film festival was almost entirely virtual. Before that it was a celebrity- studded, super-crowded extravaganza. What can we expect from TIFF 2021?
I think you can expect an exciting festival. We’re back in Roy Thomson Hall and the Princess of Wales Theatre. We have filmmakers and actors flying in as we speak, and so in many ways it’s going to look like the TIFF you remember. Now, of course, it’s not going to be as big. We’re screening roughly half the films we usually do, and lots of people are still facing travel restrictions. But it does help that as of now anyone who has one of the Canadian-approved vaccines can fly to Toronto.

Care to do a little name-dropping? What celebs are you expecting?
Our anticipated guest list includes names like Jessica Chastain, Benedict Cumberbatch, Keira Knightley. Denis Villeneuve is coming home to launch Dune for the first time in Canada and first time anywhere in IMAX, so that’s going to be great.

What about the star of Dune and professional dreamboat, Timothée Chalamet?
I can’t confirm or deny Timothée. But there will definitely be some red carpets. The other element that we started last year is our digital platform across Canada, for people who either can’t make it or aren’t ready to go out to public events. We also have some drive-ins and a seated outdoor screening area, both at Ontario Place. Our goal is to deliver the festival to audiences wherever they might be.

How did you arrive at the decision to move forward with this hybrid? Was there ever a chance TIFF would be online again?
Certainly last winter it looked like things would be mostly online again. That was the height of the third wave, and it was not pretty. But then, heading into the spring, we were starting to get cues from different levels of government about opening up society. That’s when we began thinking about the large venues: TIFF Bell Lightbox, Roy Thomson Hall, Princess of Wales and the Scotiabank Theatre for both public and industry screenings. By mid-summer all of those pieces were in place and it was just a matter of paying attention to any developments to ensure a safe experience.

What kind of Covid protocols are in place?
We are operating in our indoor venues at reduced capacity—roughly 50 per cent—because we know that is one way to help create a safer environment. We are doing additional cleanings between screenings, we are asking people to keep their masks on in the theatre—so no concessions.. And we will be asking people to present proof of full vaccination or a recent negative Covid test.

What about the throngs of fans who crowd around the red carpets to catch a glimpse of their favourite celebs? That’s just asking for a super-spreader event.
This year they’re not meant to be fan-gathering zones.We have designed the carpets as spaces where parties from the different films can meet the media. We’re not shutting down King Street like we normally do.

TIFF announced its vaccine and testing policy two weeks ago. Was that your call and was it a tough one?
The senior team made that decision together. TIFF’s co-head, Joana Vicente, and and I were paying close attention to what was going on in Toronto at restaurants, live music events and other festivals around the world to get a sense of best practice. It wasn’t an easy decision, both in terms of legal ramifications and logistical ramifications. But we knew it was the right decision.

Any plans to manage anti-vax protesters?
Protests are not new to TIFF. We are a large public event and we’re used to dealing with demonstrations of one sort or another. Keeping our audiences and staff safe is the top priority.

I was at TIFF the year that hundreds of fans mobbed Brangelina’s limo. How do those people compare to anti-vaxxers?
That’s hard for me to say. But every time we have a security situation, we learn from it.

This year’s opening night film is Dear Evan Hansen. How was that selected?
Dear Evan Hansen is a movie about how people respond to crises by connecting with one another, which felt like a good note to hit this year. It’s the film version of the Tony-winning Broadway musical, and it has great songs. Ben Platt is back in the title role, co-starring with celebs like Julianne Moore and Amy Adams. It’s not fluff but it’s feel-good. It’s been a tough 18 months, with the pandemic and shutdowns and all kinds of other important social movements. And that’s reflected in our selections. We’re really happy to be presenting Danis Goulet’s Night Raiders, which takes an incredibly painful issue—the stealing of Indigenous children from their families—and turns it into an exciting work of speculative fiction. It’s a genre piece with real energy and action, and it gives people a way of grappling with what’s going on in the world while still entertaining them.

Any pandemic movies?
We have a lot of movies that were made during the pandemic. Sometimes you can tell because they’re only set in one or two locations. But other times you can’t. It’s amazing how filmmakers have risen to the the challenge of shooting during Covid. Encounter, for example, about a man on a mission to rescue his sons from an alien threat, is about that feeling of being terrified and not really knowing what’s real and what isn’t. It’s not about Covid, but you feel that tension.

End-of-days movies have been popular viewing since Covid hit. Do you have a favourite?
Like a lot of people I re-watched Contagion, and that is probably my favourite. I’m a big Steven Soderbergh fan and he will be in Toronto this year. We have a little surprise for TIFF-goers that we haven’t announced yet. It’s the project he’s been working on, and we’ll be the first to show it.

Was it challenging to convince A-listers to attend during a pandemic? Did you fly to some remote sterilized pod to woo Jessica Chastain?
Thankfully Jessica Chastain knows Toronto really well and has lots of friends here so that wasn’t hard to do. And I haven’t been on a plane in almost a year and a half. I would say that like all of us, actors have a real range of reactions. Some are good to go—they’ve gotten their two vaxxes and they’re ready to travel and work to promote their films. Others are a little more cautious, so we had to take each person and film case by case. When somebody isn’t comfortable travelling, we’ve figured out ways of doing Q&As digitally. At the same time, we do have a lot of people who were eager to come and to meet the Toronto audiences, which is what we’re known for.

Does the same vaccine policy apply to stars as to movie goers? Like if Jessica Chastain were unvaccinated, would she still be able to come to TIFF?
Why are you riding Jessica Chastain? Come on!

I’m a fan! I’m just curious about the policy.
Well, it’s not our policy so much as the Canadian government’s policy, so if Jessica Chastain is coming, that’s where she has to declare.

What about the industry hobnobbing aspect of TIFF? In the old days movies were bought and sold over champagne cocktails on the Park Hyatt rooftop.
It used to all be in person. That buzz in the room, in the theatre, would make or break a film in terms of its future fortunes. I think we’re in a new era. Now it’s the online reaction on Twitter, Facebook, Tik Tok. You’ll see that as soon as a film launches, people are online expressing their reactions, and the distributors and the press and award-watchers are tracking that.

You were recently invited to join the Academy. What took them so long?
Ha! That’s hilarious. I’m excited to be a member. Of course I have watched a lot of the films that are submitted to the Oscars already, but I’m excited to watch even more and vote. The Academy is kind of like TIFF in the sense that they’re known, for the Oscars, just like we’re known for the festival every September, but there is so much more that goes on throughout the year in terms of engaging young creatives, preserving history.

Okay, but have you started planning your Oscar outfit?
I’m taking advice and suggestions.

TIFF has often been a key stop on the road to Oscar. Any predictions based on what you’ve seen?
I can tell you that Jessica Chastain is amazing in The Eyes of Tammy Faye, so I would encourage everyone to see that performance. There’s a great documentary called The Rescue by E. Chai Vasarhelyi and Jimmy Chin, who are past Oscar winners. There’s Jane Campion’s The Power of the Dog. There is a lot this year. I think people will see the awards race come into focus at the festival.

And what will you be doing on September 19, when the festival ends?
After the festival, I usually go for a long walk in a part of the city that I haven’t been to. In past years I have gone to the Toronto Islands.

Cameron, after Covid, haven’t we all had enough long walks?
Ha. I guess, but I’m still into it.