Toronto-based photographer Scarlet O’Neill launched her annual Love (Actually) exhibit at the Gladstone three years ago as a way to showcase her favourite candid moments at weddings. This year’s show focuses on touch, with images from 34 photographers. “Hands play an important role in each moment,” says O’Neill. “They heighten people’s emotions, whether it’s wiping away a tear, touching a loved one’s face, raising their hands in delight or hiding their face to contain their feelings.” Here, the photographers discuss the stories behind some of the exhibit’s most moving photos. 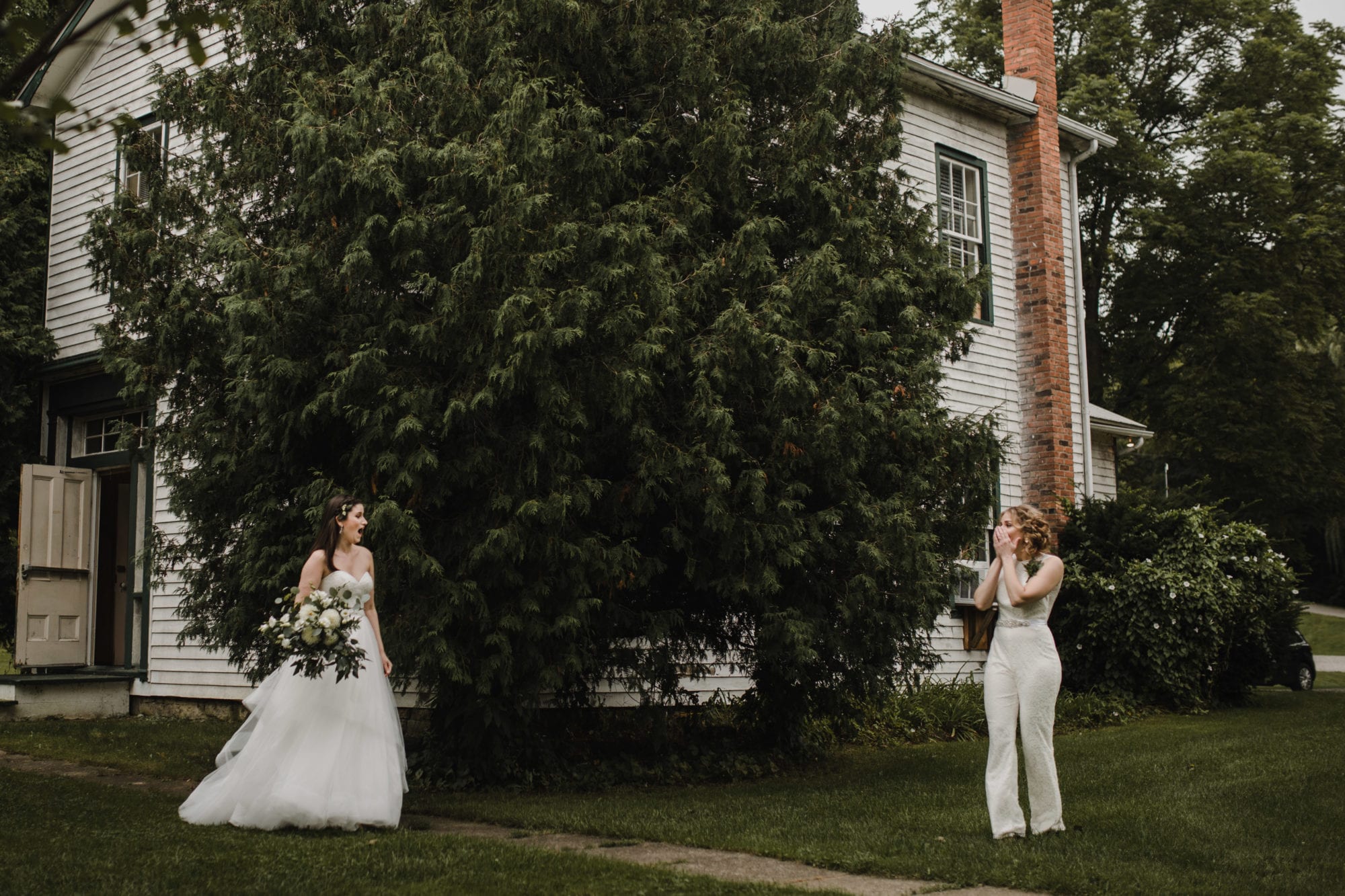 “On the morning of their wedding, Steph and Liz got ready with separate bridal parties. They wanted to have their first look at each other alone. Neither had any idea what the other was going to be wearing, or how she’d have her hair or makeup done. As they came around the sides of the house, both of their jaws dropped.  Their reactions were so adorable.” —Photographer Jennifer Cornthwaite 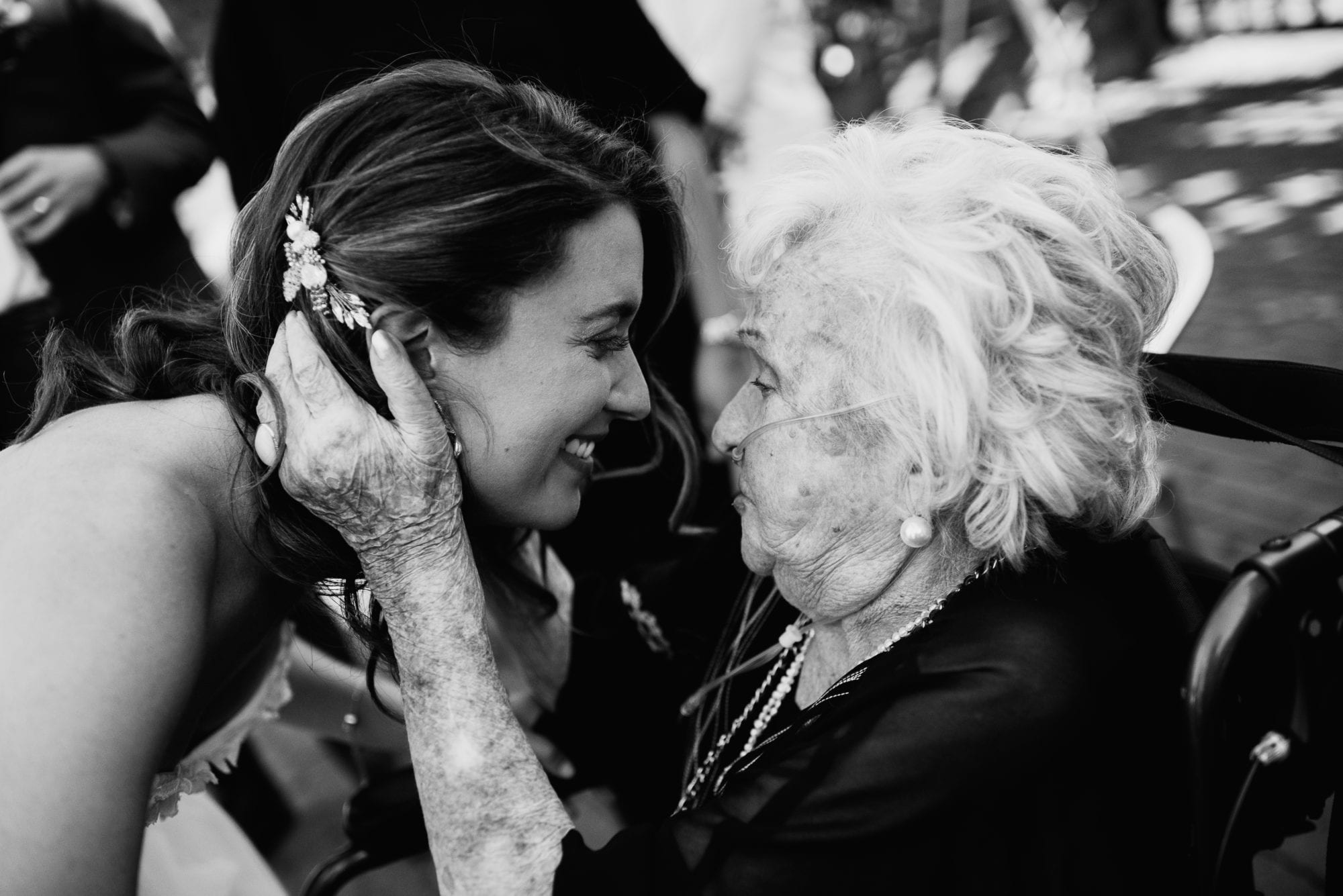 “Frida was all smiles watching her granddaughter Maddi marry the love of her life, Francisco. Right after the ceremony, Maddi ran up to her grandmother and told her how much she loved her and how happy she was that she was there. A few months later, I received this message from Maddi: ‘I’m sad to say my grandma passed away in November, but my heart is full because she made it to our wedding. You captured this precious moment that I will be forever grateful for. Just want you to know how much it means to me.’” —Photographer Jessica Lee Latone 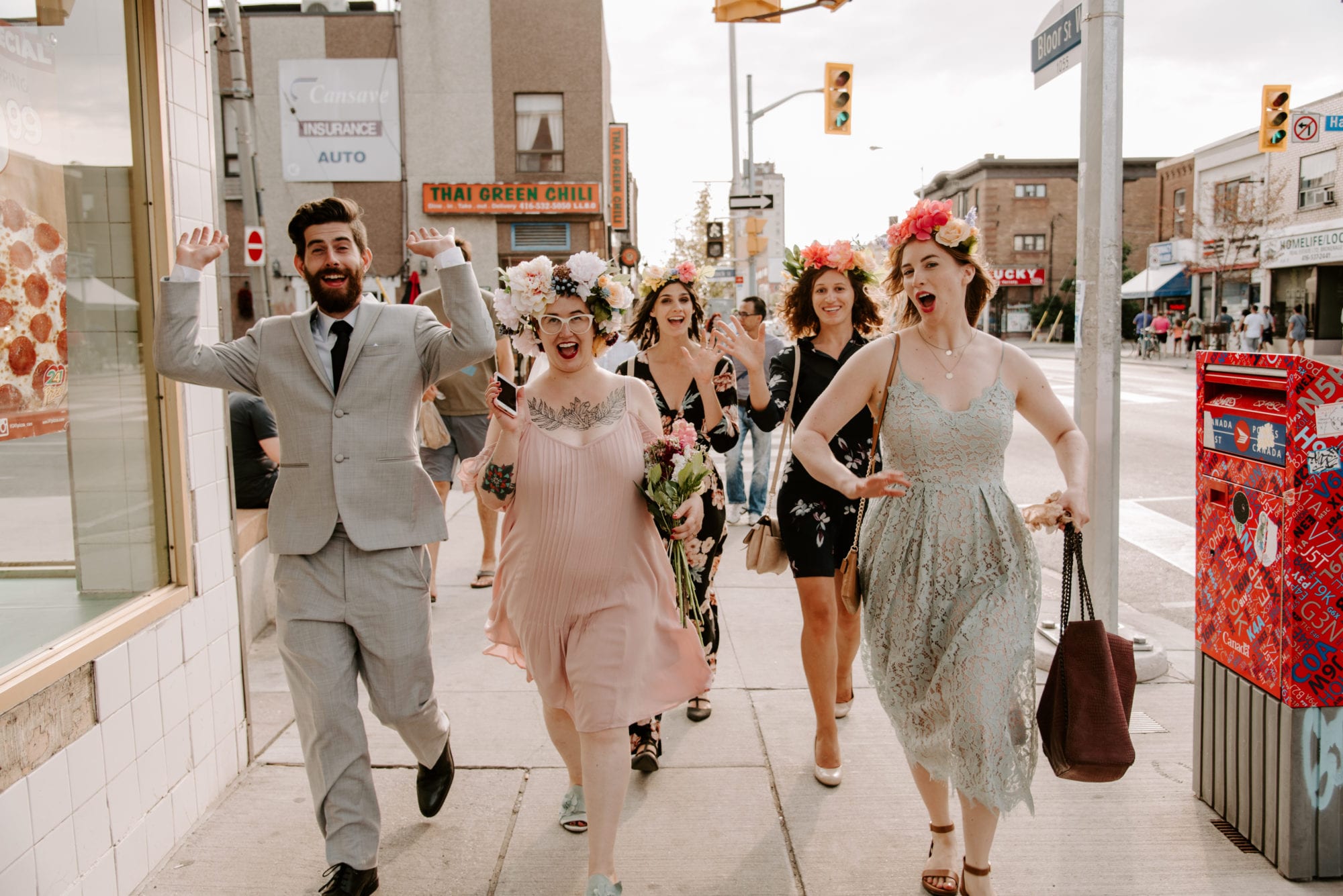 “Stephanie and Doug exchanged their vows at Dufferin Grove Park and then decided to walk over to Disgraceland, a vegan restaurant on Bloor Street where they had one of their first dates. They were bursting with love after the ceremony, so I ran up ahead and took this photo. I was so happy to able to capture that energy. This photo and the people in it are as Toronto as it gets.”—Photographer Jessica Salemme 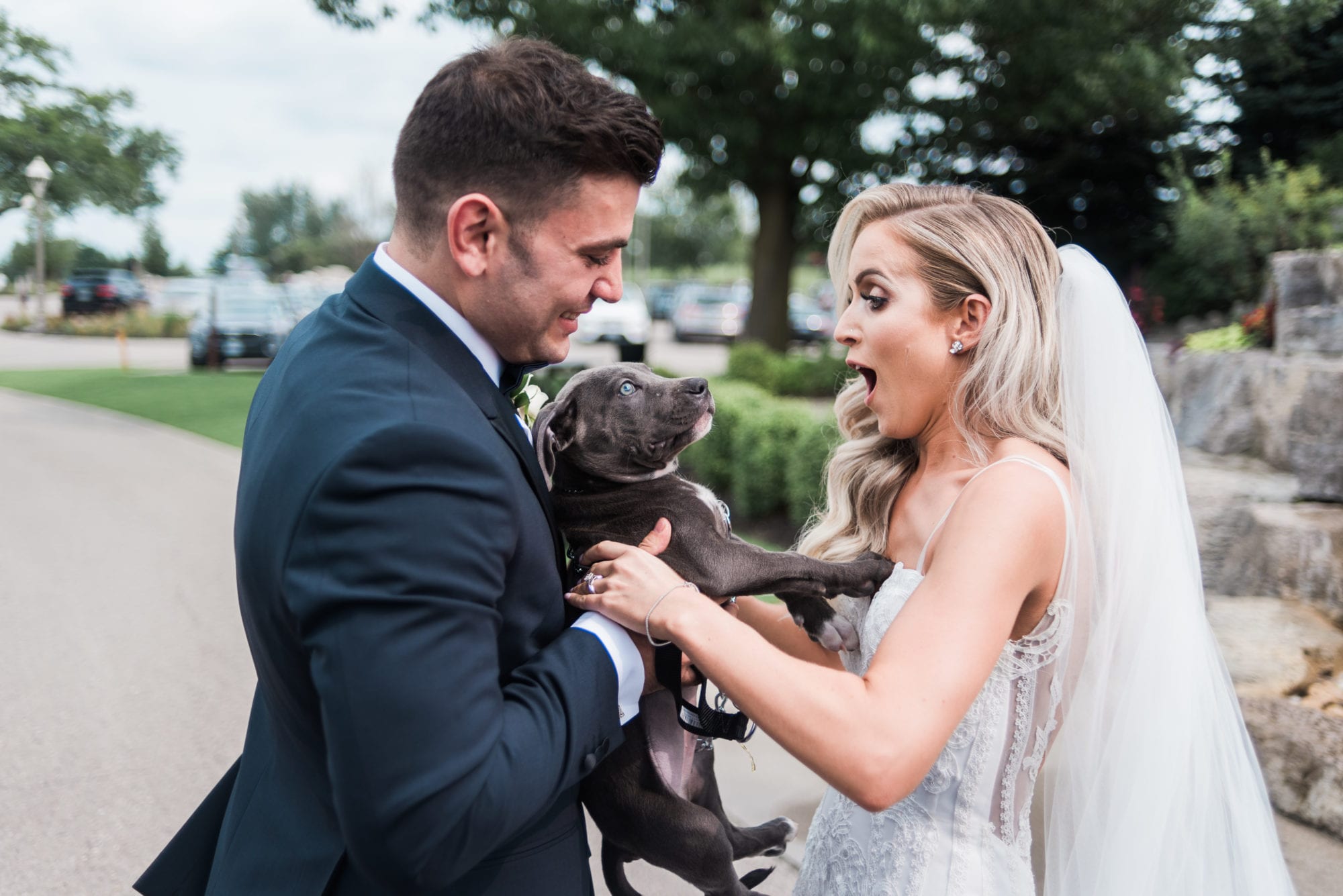 “I found out four days before the wedding that Matt was planning on surprising Katie with a puppy. He did it right after the ceremony, and I tried to keep her distracted as he walked up behind her with the dog, Boomer. When she finally turned around, her reaction was priceless. Boomer actually ended up peeing on her dress. Even when things don’t go perfectly, as long as there’s love, it really doesn’t matter if you get a bit of puppy pee on your wedding dress.” —Photographer Caitlin Free 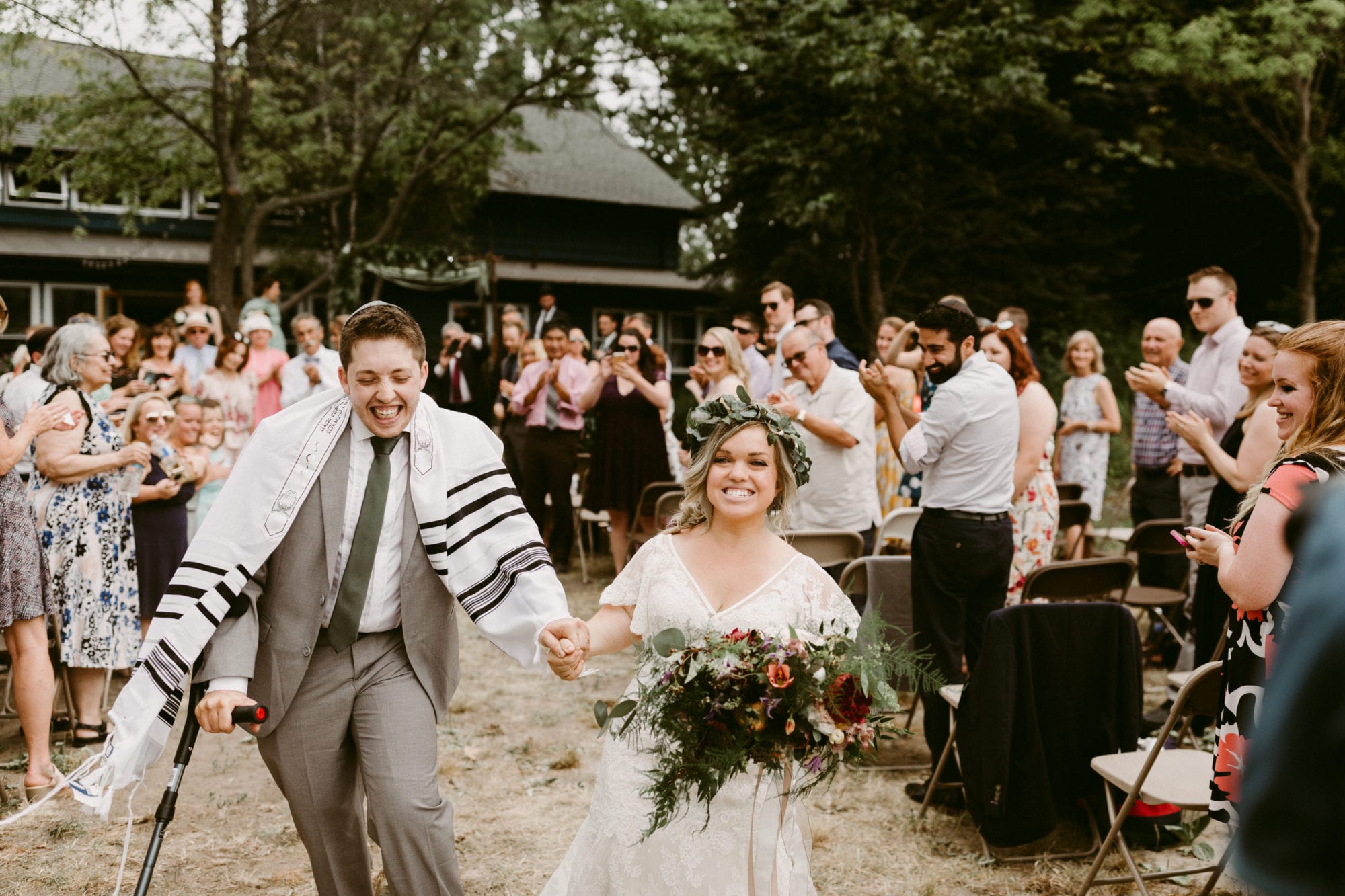 “Brit and Aaron fell in love after going on a road trip together. Brit has dwarfism and Aaron has cerebral palsy, but they live normal, happy lives and aren’t defined by their disabilities.” —Photographer Agnes Wywrot 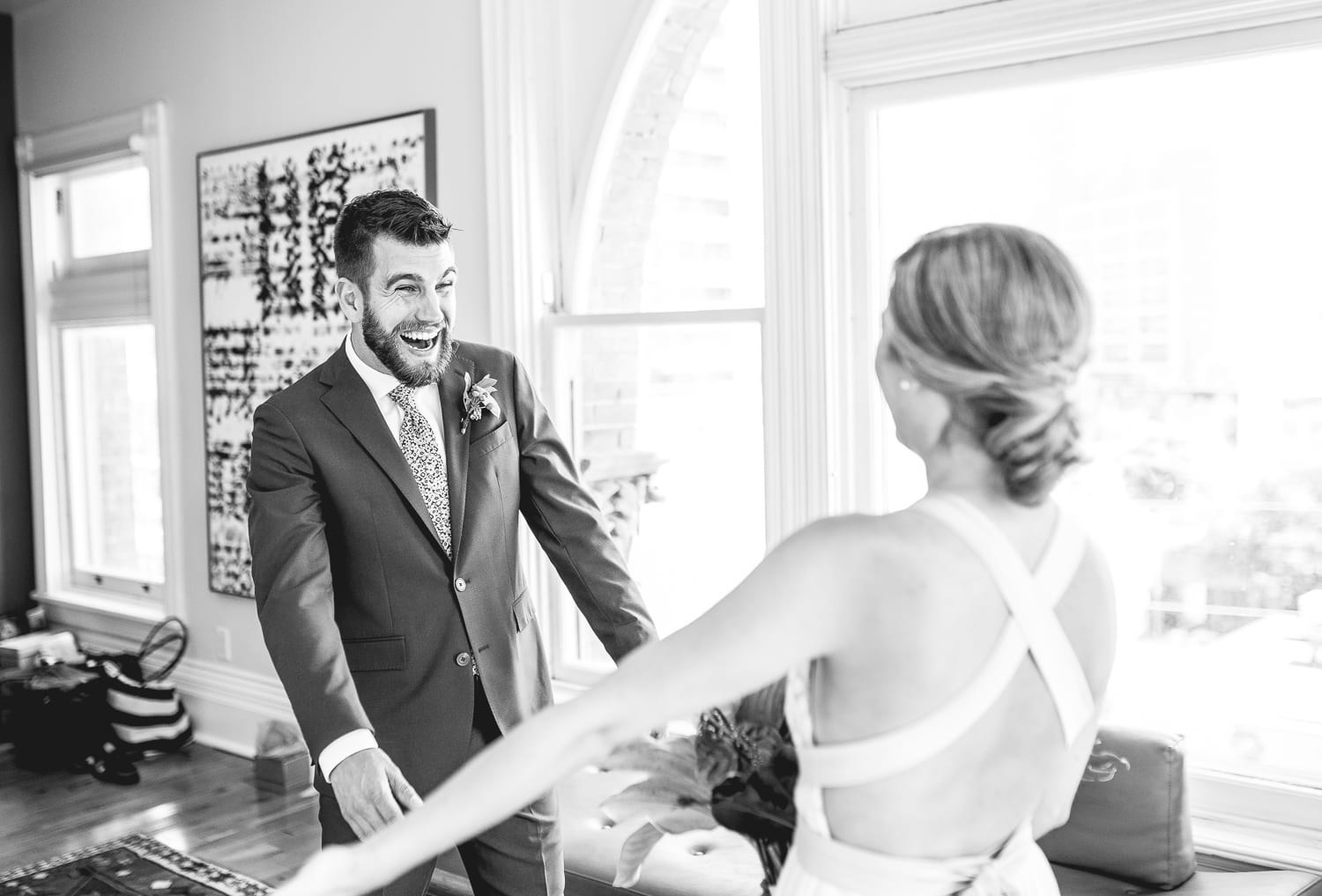 “I love capturing first looks. It’s a surreal and personal moment between two people that you get to see as a photographer. I love the anticipation, the nerves and the resulting magic. This shot was taken just as Aren turned around to see his bride. It still makes me smile ear to ear.” —Photographer Ryan Bolton 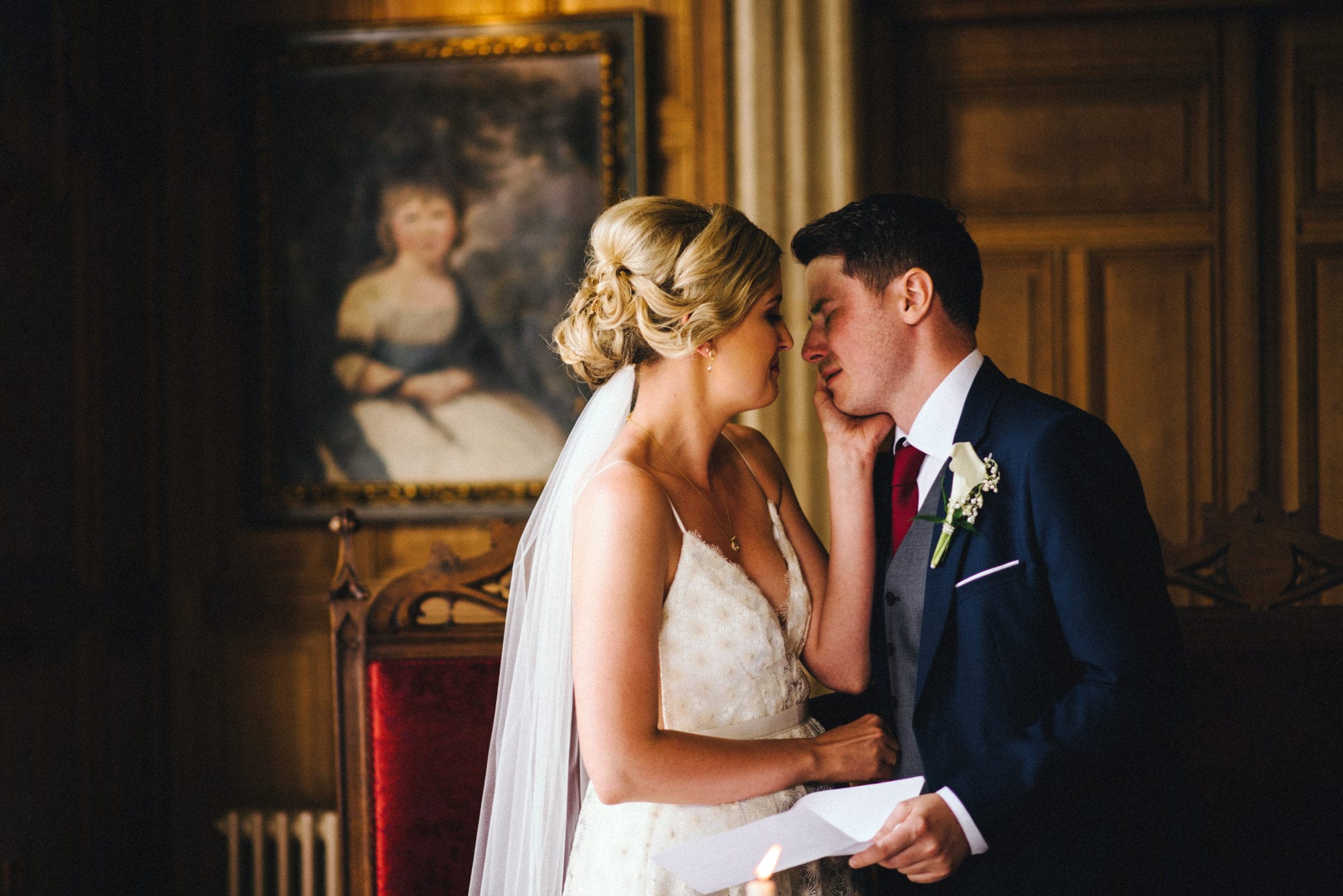 “Eva and Alan’s wedding was one of the most emotional days I’ve ever documented. When I arrived the morning of the wedding, a few of the bridesmaids told me that people were betting on how many times Alan would cry throughout the day. When I took this photo, it was time for Alan to recite his vows, and his emotions took over. There wasn’t a dry eye in the room. Within a few seconds, I heard a bridesmaid yell, “Three!” Turns out it was his third cry of the day and the whole room started to laugh.” —Photographer Megan Michelle 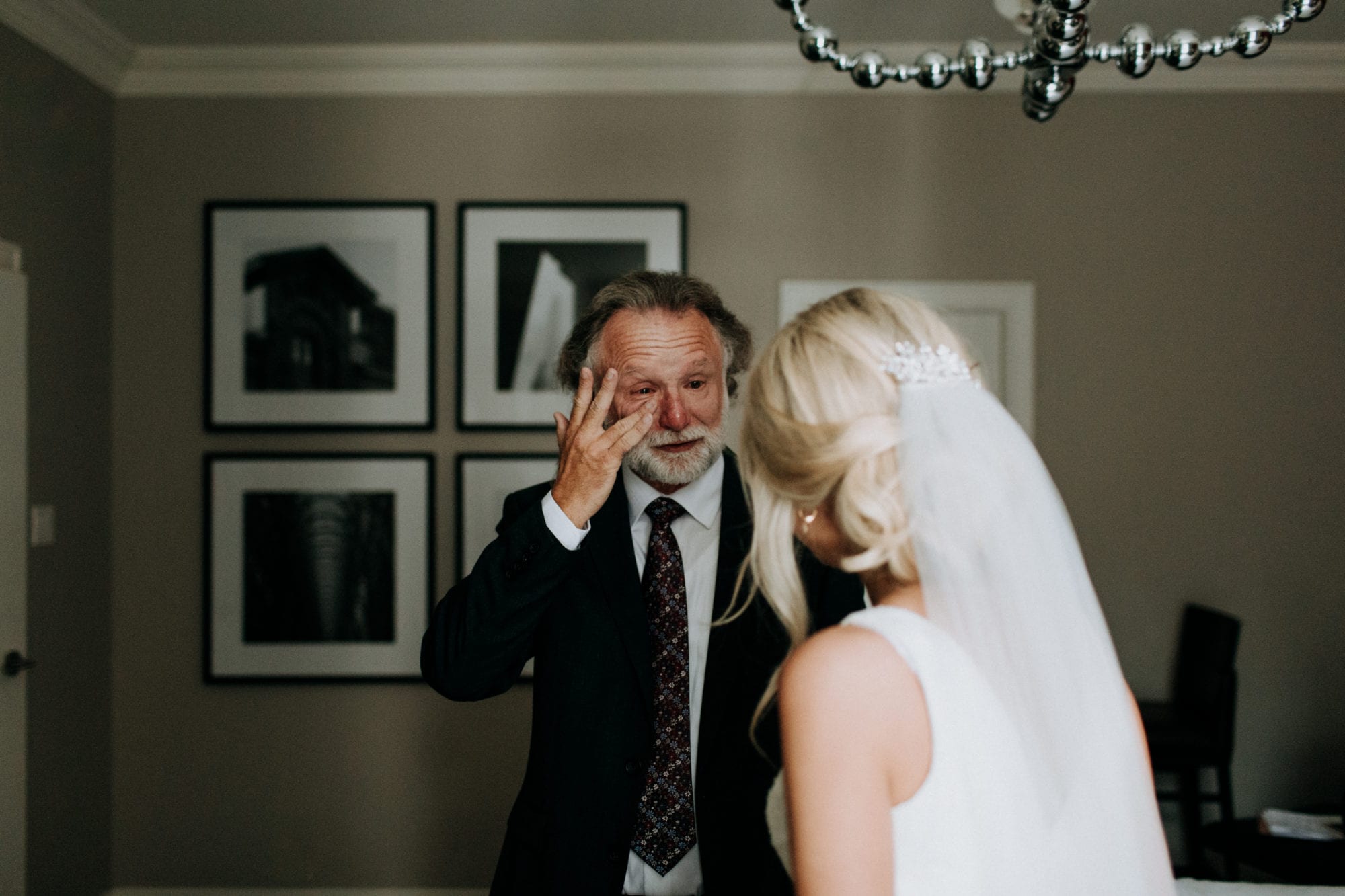 “Anna and her dad, Jerry, are best friends. After Anna got dressed, everyone stepped out of the room so the two of them could have a minute alone together. When Jerry saw her in her dress for the first time, they both burst into tears. I’ve been a part of nearly 200 weddings but it’s moments like this that keep me going.” —Photographer Jennifer van Son 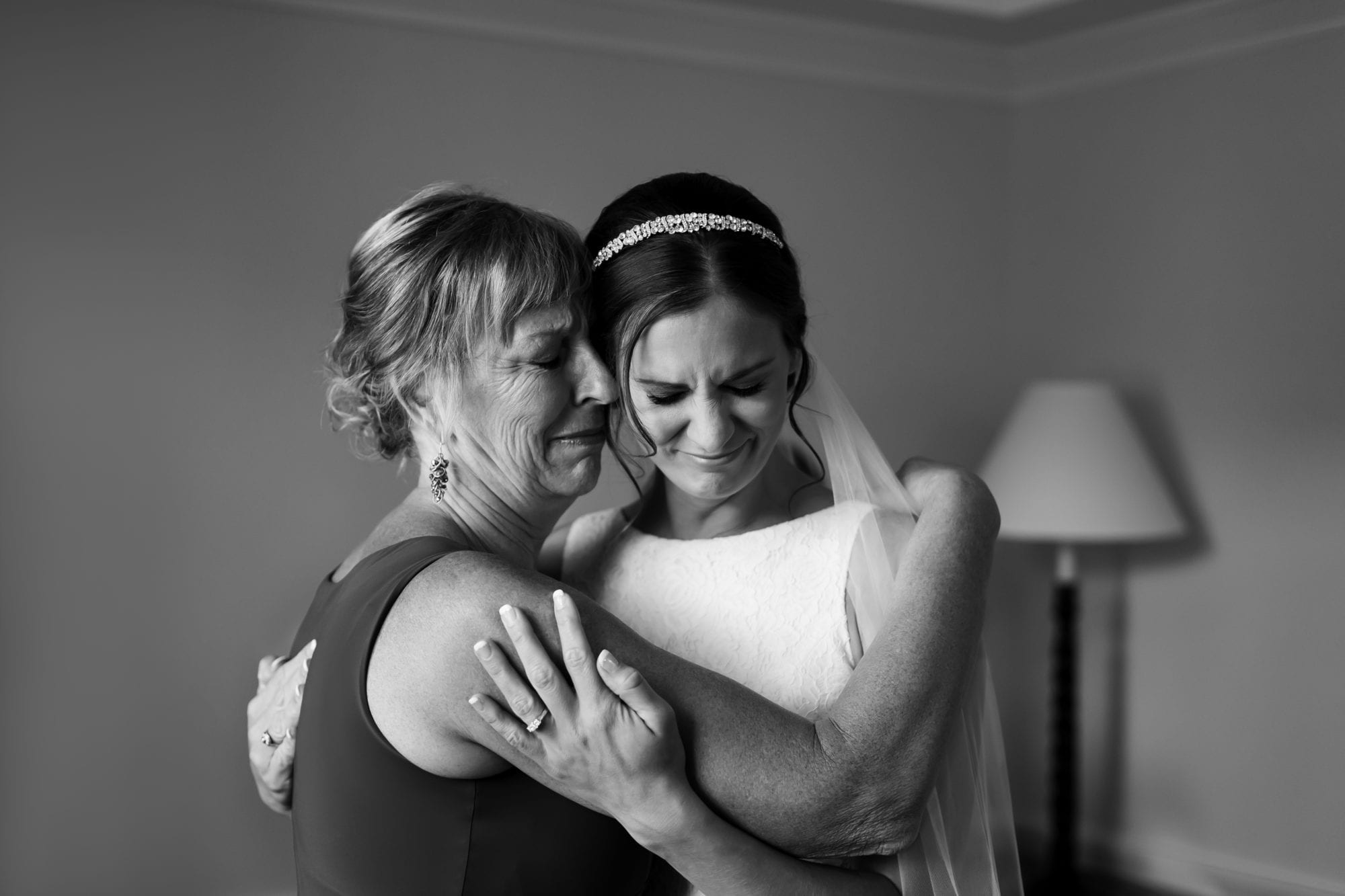 “Taylor was full of nerves the entire morning. After she zipped into her dress, she glanced at her mom, Jodi, and they shared this natural moment. There are so many important relationships that exist on a wedding day, but the ones between couples and their parents are special to me.” —Photographer Lauren Valvasori 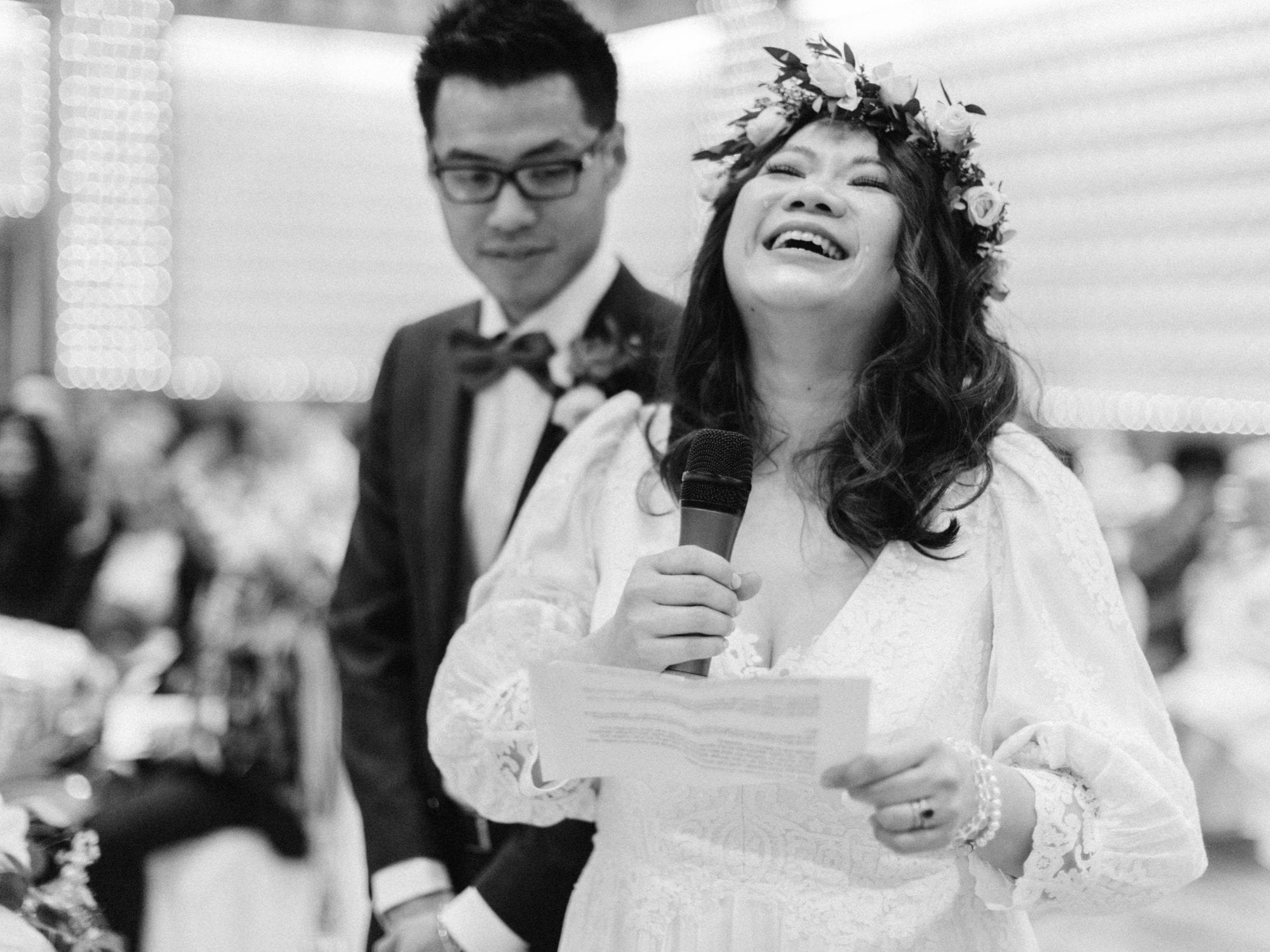 “Most of this wedding was conducted in Mandarin. During Wenney’s speech, she spoke to her beloved grandmother, who couldn’t be there on her wedding day. We all laughed and cried along with her as she told stories about her grandmother, tears streaming down her cheeks.” —Photographer Corynn Fowler