Hereditary is quickly earning a reputation as the scariest movie of the year. Or maybe the millennium. Or maybe ever. And among its genuine terrors is a small—and creepy—world made in Toronto.

In the film, Toni Collette plays a miniaturist who builds intricate dioramas of pivotal family moments, including some with her recently deceased mother. The tableaux are a mix of family drama and macabre scenes, much like the film itself. All of that delicate miniature work was done by Toronto-based visual effects artist Steve Newburn and his team at Applied Arts FX Studio. The film was originally meant to shoot in Toronto, and when production moved to Utah, they kept the Canadian special effects team.

According to writer-director Ari Aster, the miniatures are meant to signal that the characters are like dolls in a dollhouse without agency or control over their circumstances. But for Newburn, who also did the film’s prosthetic and makeup effects, the work was technical, not allegorical: it was just about basswood, card stock, insulation foam, paint, 3-D printing and deadlines. “I can’t worry about the philosophy or what the characters are thinking,” he says. “From an artistic standpoint it becomes almost impossible, because you’re always questioning whether you’re straying from the cinematic idea.” While some of the models were inspired by images Aster found online, most are miniature recreations of the set pieces and actors.

Like most movie models, these miniatures were built to be demolished on camera. It made for a unique kind of payoff for Newburn and his artists, who put in months of painstaking work, detail by detail, only to watch it all get smashed to pieces.

Here, he tells us how they made some of the film’s coolest dioramas.

Aster gave Newburn a list of themes that were meant to inform some of the models. “One was the idea that the house is trapping its owner inside,” Newburn says. In the film, this model is displayed in the front hallway of the family home. 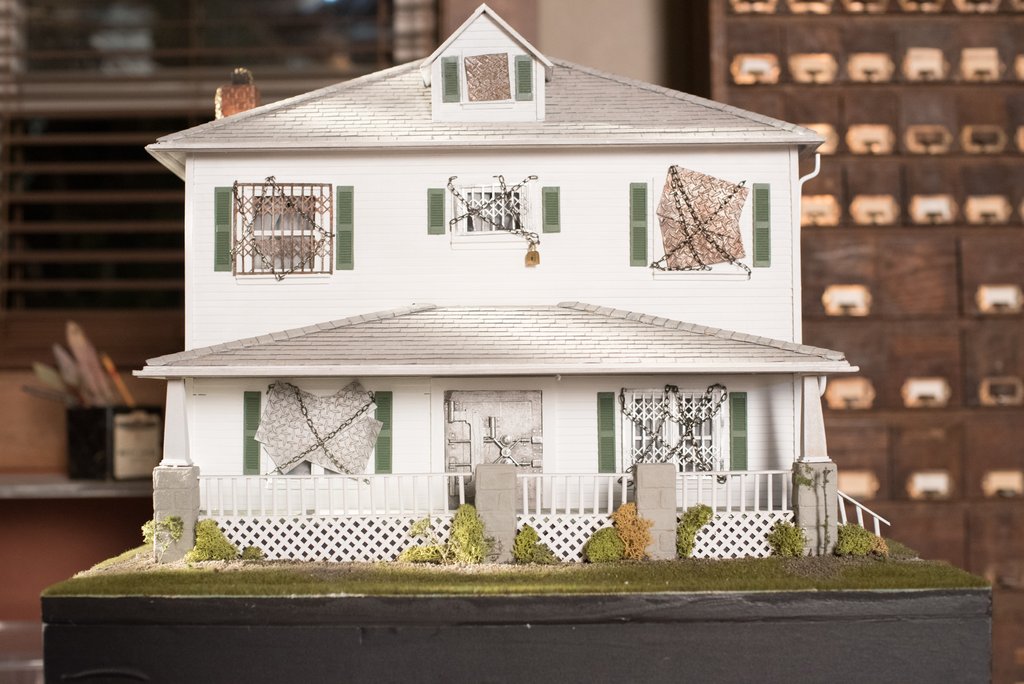 This model, which appears near the main staircase of the family home, shows three houses sinking below the ground as if in quicksand to hell. Aster and production designer Grace Yun wanted to convey the passage of time, so they featured architectural styles from different eras: colonial, Victorian and modern. Artist Adrian Stansfield built the model in about a week. 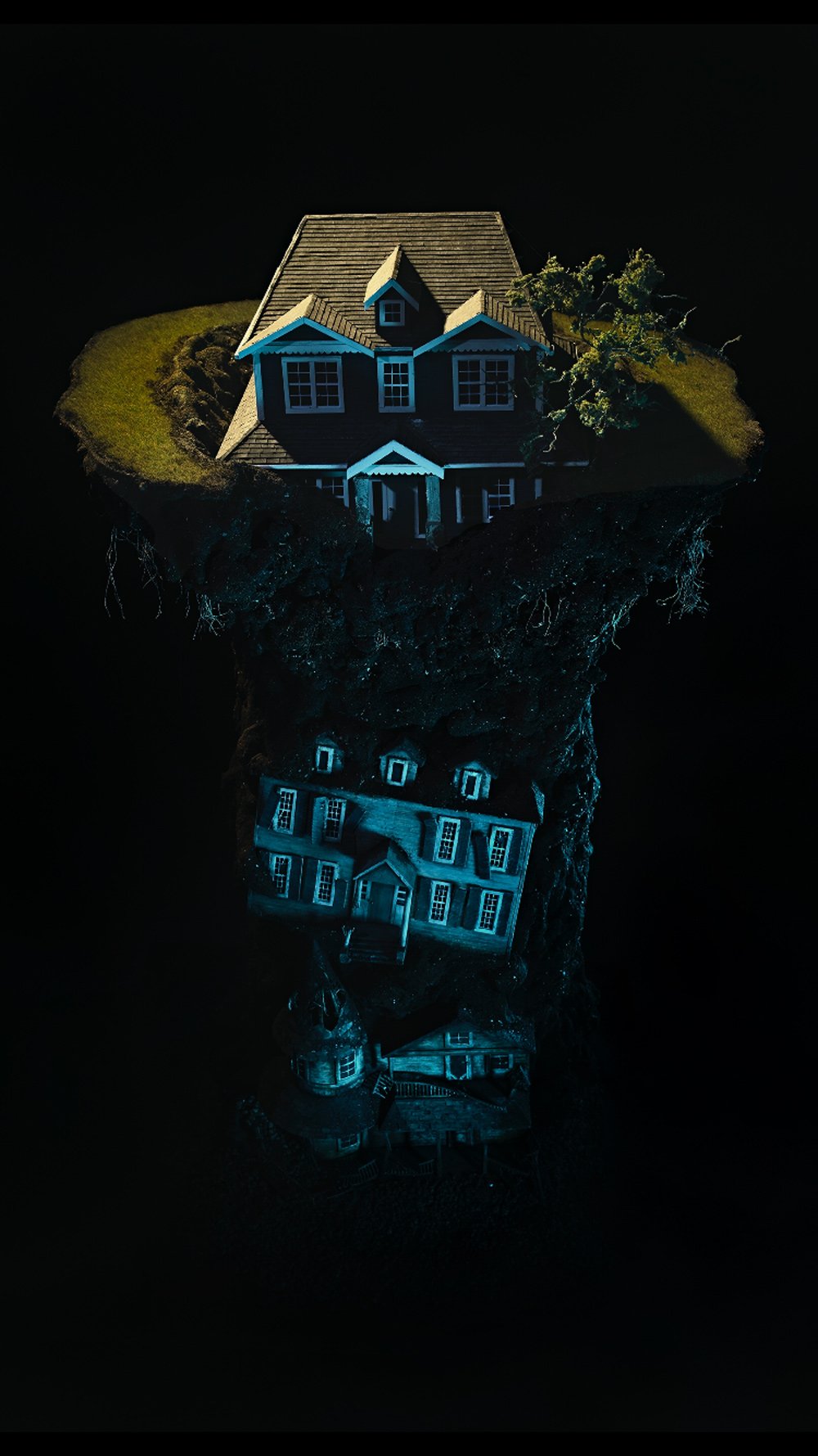 At about nine feet long, this model was the largest undertaking of the production. Each room was fully finished to match the set interiors at Park City Studios, and the exteriors were based on a real house just outside the city. Newburn spent several days on location taking hundreds of photos so that every detail matched. 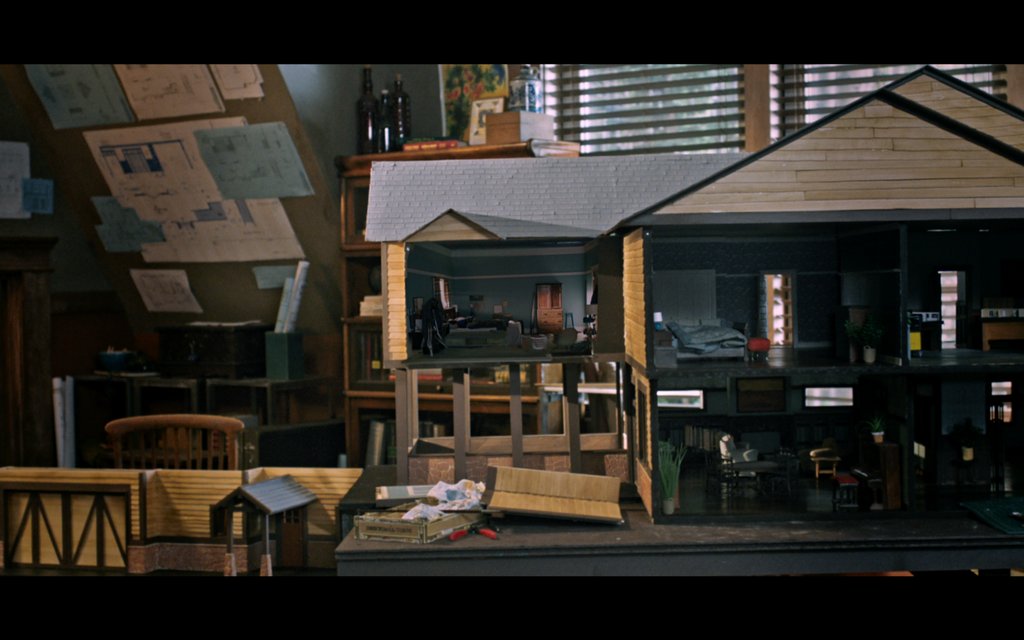 Several models were made to a larger scale, including this one, which shows Annie breastfeeding her baby while her late mother watches. Other figures were made to a 1:12 scale—the standard size for dollhouses—so that if the designers ran out of time, they could easily find similarly sized figures. 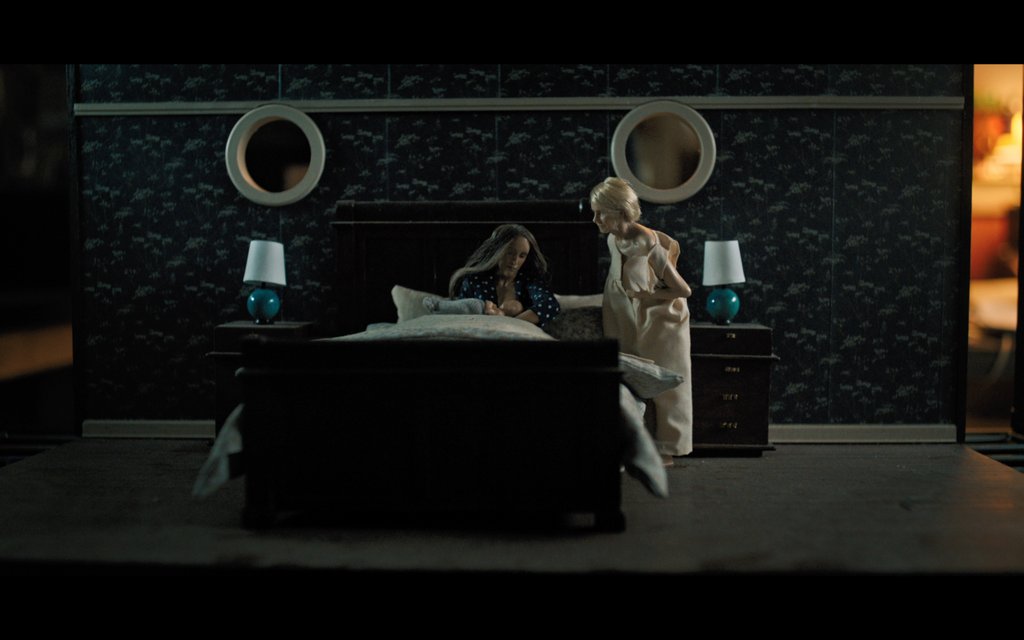 Newburn and team made at least three different grandmothers—the one at the hospice, the one at the breastfeeding scene and this one. 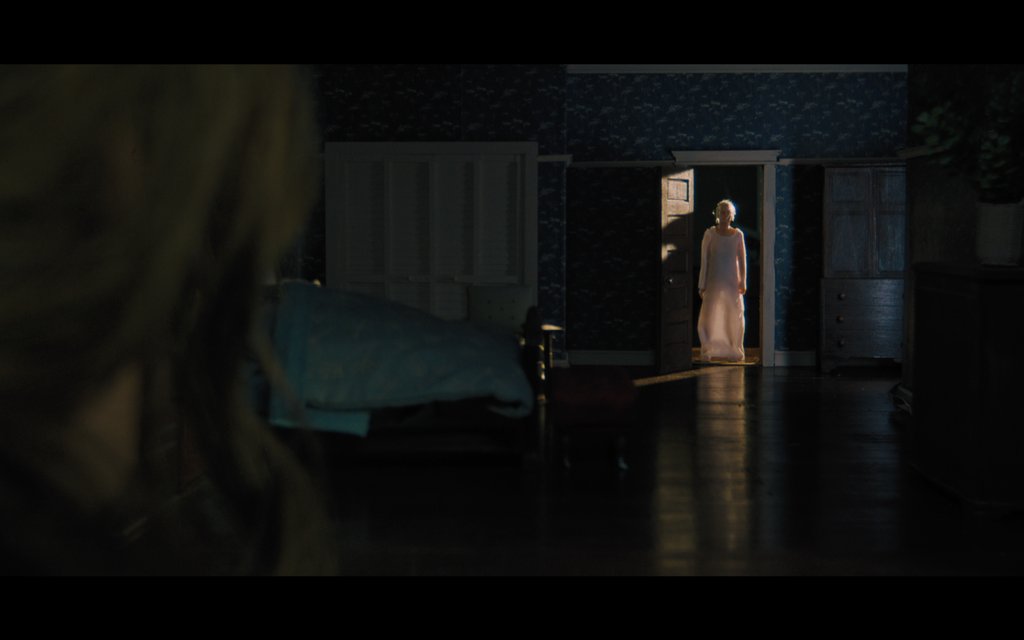 As Annie continues to spiral emotionally, she adds more and more disturbing miniatures to her collection. 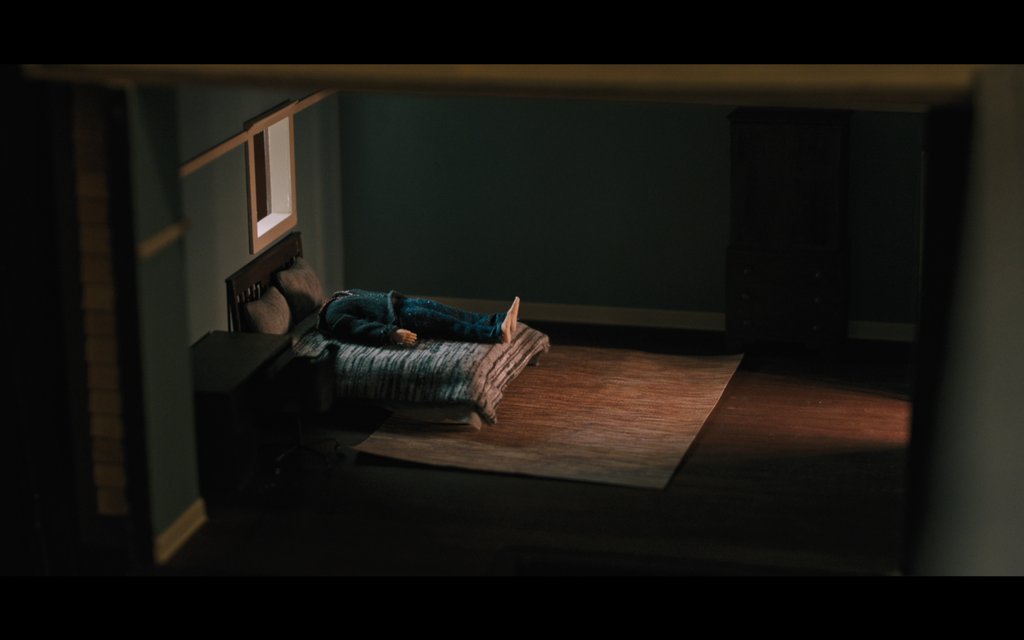 Newburn’s team collected as many references as they could of the blue Volvo V70. Then they drew a computer model and had it 3-D printed. 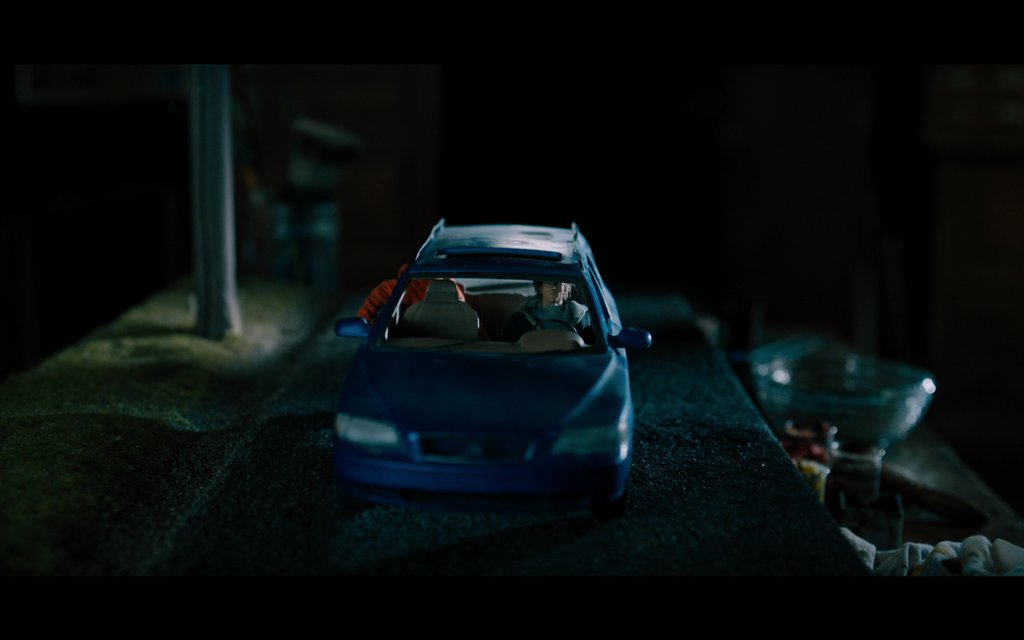 The piano appears near the dinner table in the main house and plays a gruesome role near the end of the film. 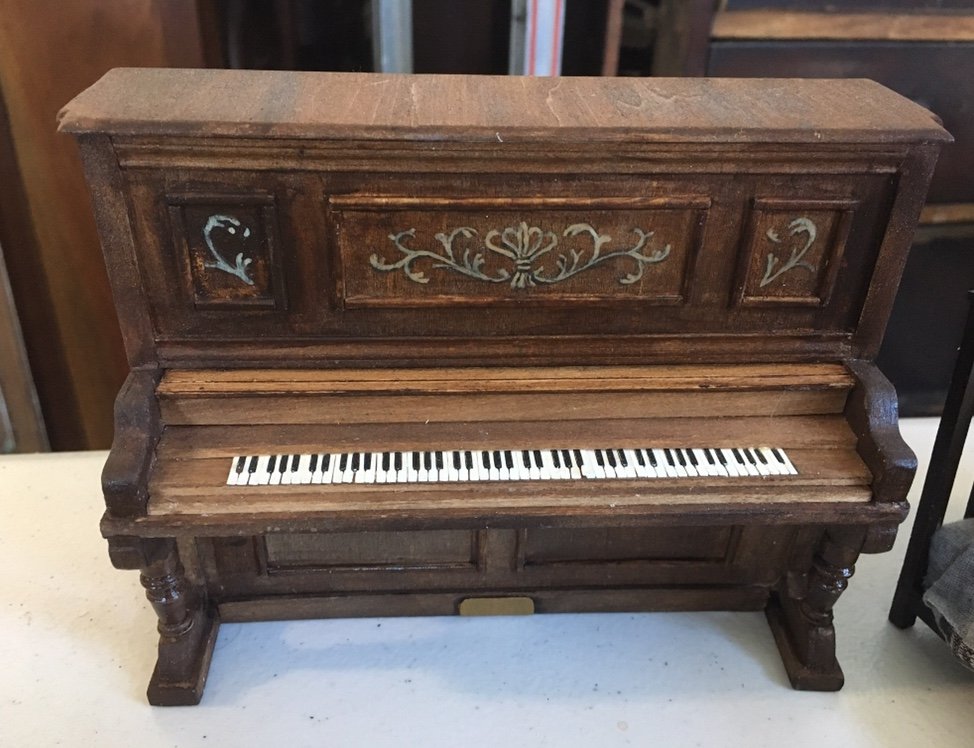 Much of the miniature work is based off Annie’s own life, from her daughter Charlie’s preschool to her mother’s final days in a hospice. 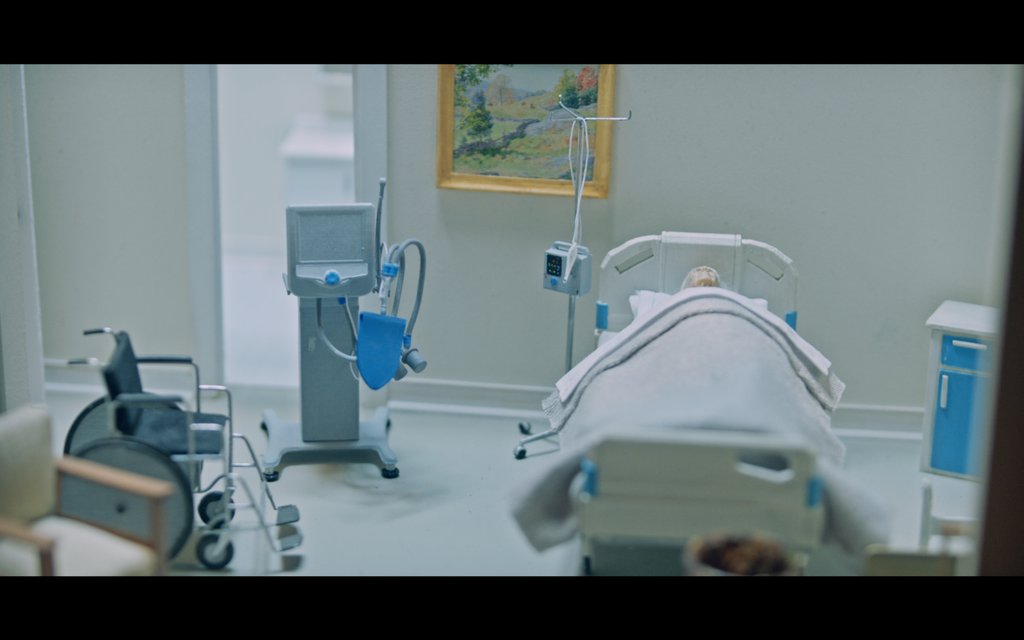 The preschool classroom is the most detailed miniature in the film. It was the first piece they started, so they had the most time to finish it—almost too much time. “We kind of went crazy with that one,” says Newburn. There were thousands of detailed pieces made by artists Erin Newburn, Colleen Hogan and Angela Campanille in the original version, but much of them were removed make it look like Annie’s art exhibit was still several months away. 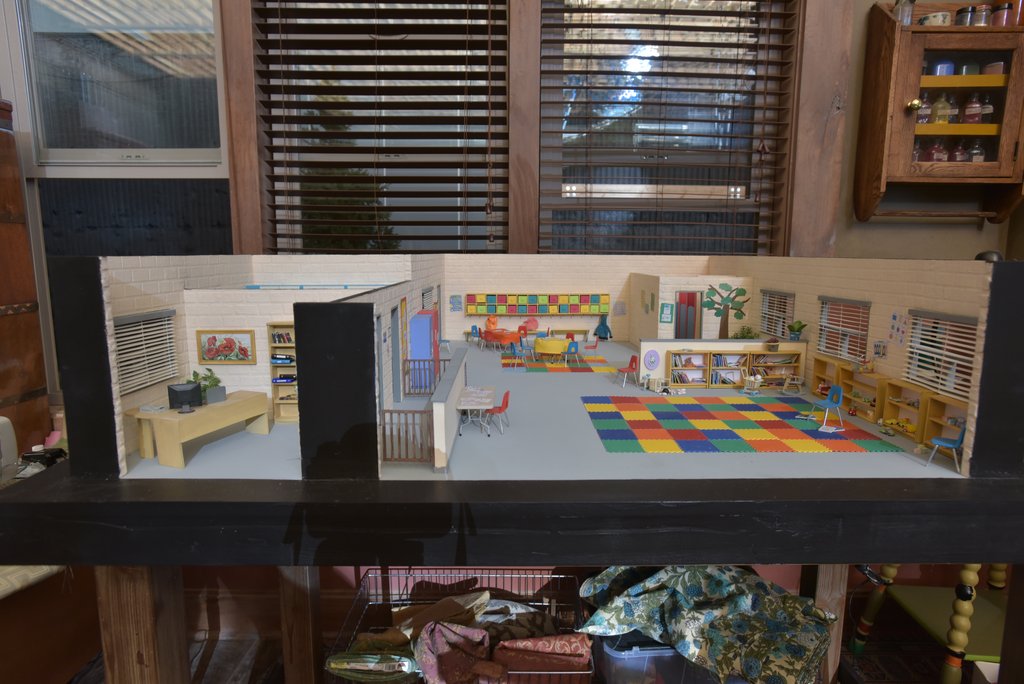