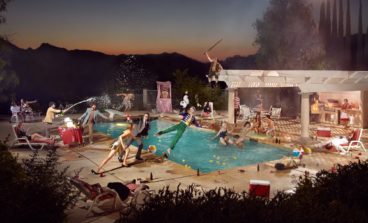 Inside the Where's Waldo worlds of Ryan Schude

Ryan Schude’s photographs look like stills from films, waiting for a viewer to press play and let the chaos unfold. The frenetic, Where’s Waldo?–style tableaux are stuffed with dozens of characters and storylines frozen in decisive moments: a champagne bottle popping, a man falling off a canoe, a woman throwing her husband’s suitcase off her balcony.

Schude, an L.A.-based photographer, can spend months meticulously planning each elaborate production, scouting locations, imagining the scene, gathering props and hiring actors. At the shoots, meanwhile, the clock is ticking—he can only snap so many frames before the golden hour’s magical light disappears. The end goal is to get the perfect shot, but the final product is just as often a composite of a handful of his favourite images, seamlessly spliced together in Photoshop.

From now until November 24, a few of Schude’s photographs are on display at Photography Now, Eye Buy Art’s six-week pop-up show at the FCP Gallery. We asked him to break down the process behind some of our favourite scenes. 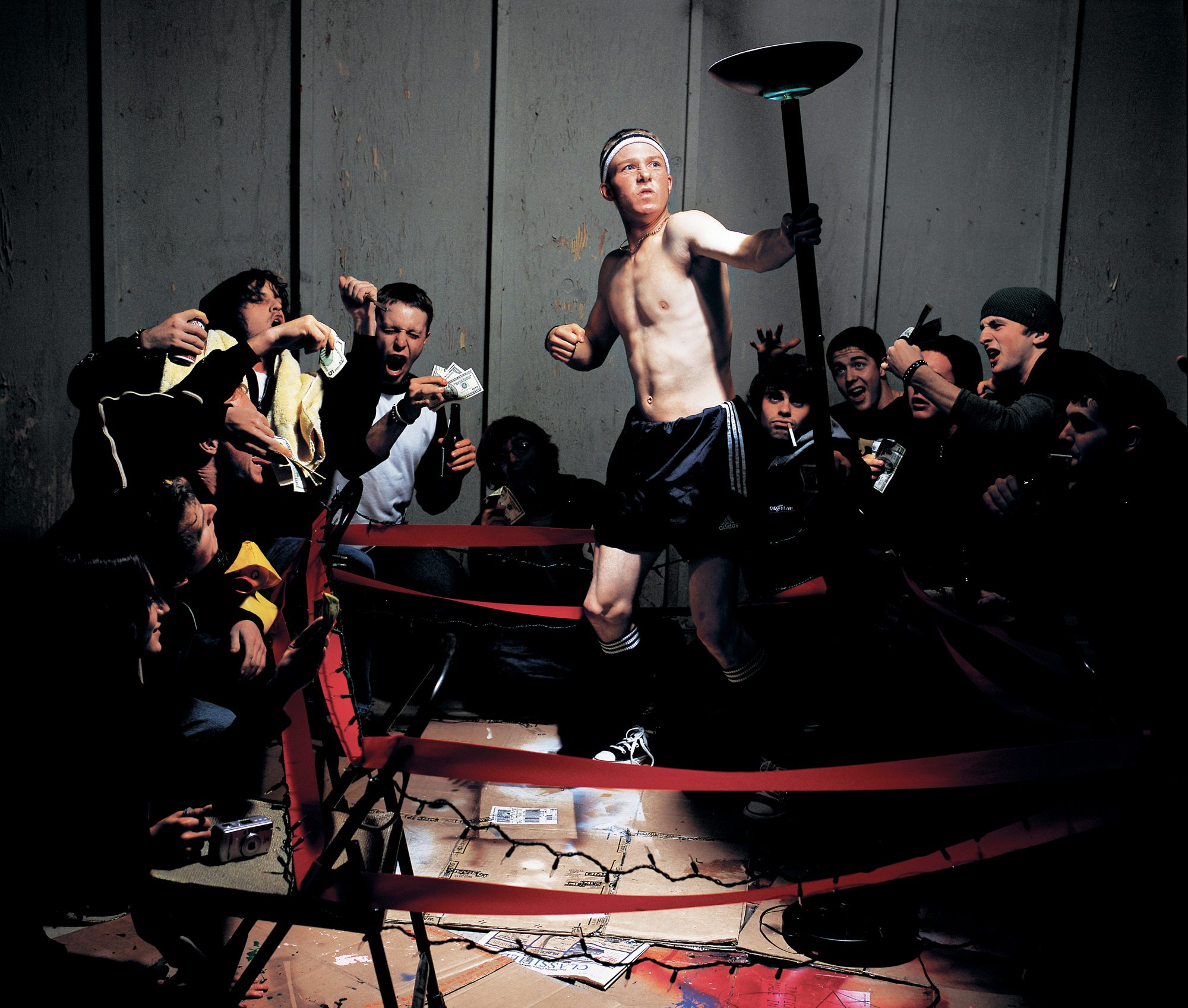 In 2006, Schude was a photo editor at a San Diego–based inline skating magazine called Daily Bread. “I shot about 90 per cent of the photos in the magazine,” he says. “So I did a lot of really uninteresting portraits.” Eventually, itching to try something different, he staged this scene, featuring the subject of one of the magazine’s stories fighting a lamp in a DIY boxing ring. It was the shot that steered Schude away from documentary photography and opened the door to his staged, fictitious tableaux. 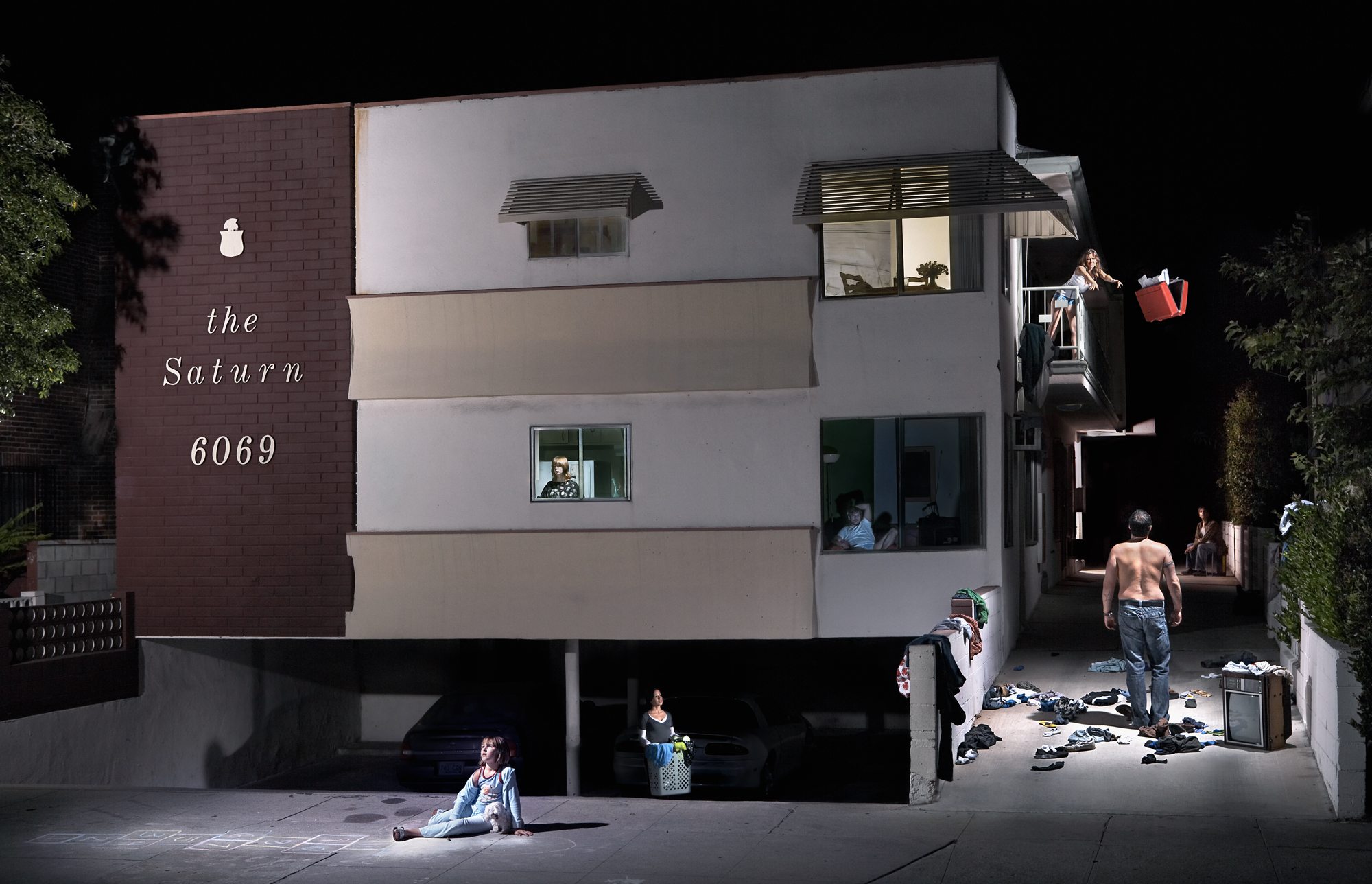 Shortly after leaving Daily Bread, Schude snapped this scene. “It’s that tired old cliché of a woman throwing a guy’s stuff out the window,” he says. “This actually happened to my parents when I was a kid.” Schude shot the photo at his own apartment building; his brother is on his couch in Schude’s unit on the lower level, and he convinced his upstairs neighbours to leave their light on and give him access to the balcony. “She had to throw that suitcase like 20 times to get the right shape and make sure she wasn’t blocking her face with her hands.”

In 2010, the organizers of a photographers’ retreat called Phoot Camp asked Schude to shoot a tableau as an icebreaker for the participants. So, he and fellow photographer Lauren Randolph dreamed up this rager. They rented out a mansion in Calabasas, California; dropped $1,500 on pizza, Cheetos, beer, red cups and other props; and asked their subjects to show up dressed like their favourite high school archetypes. The band geek got dunked at least a half-dozen times, even if Schude stuck with the first take in the final image.

This apocalyptic morning-after image features the Phoot Camp gang again, this time inside the mansion. Take a closer look and you’ll spot a lot of the same props—and a continuation of the story. “The jock pushes the band nerd into the pool at the party,” Schude says. “But the next day, the nerd gets the jock’s girl.” 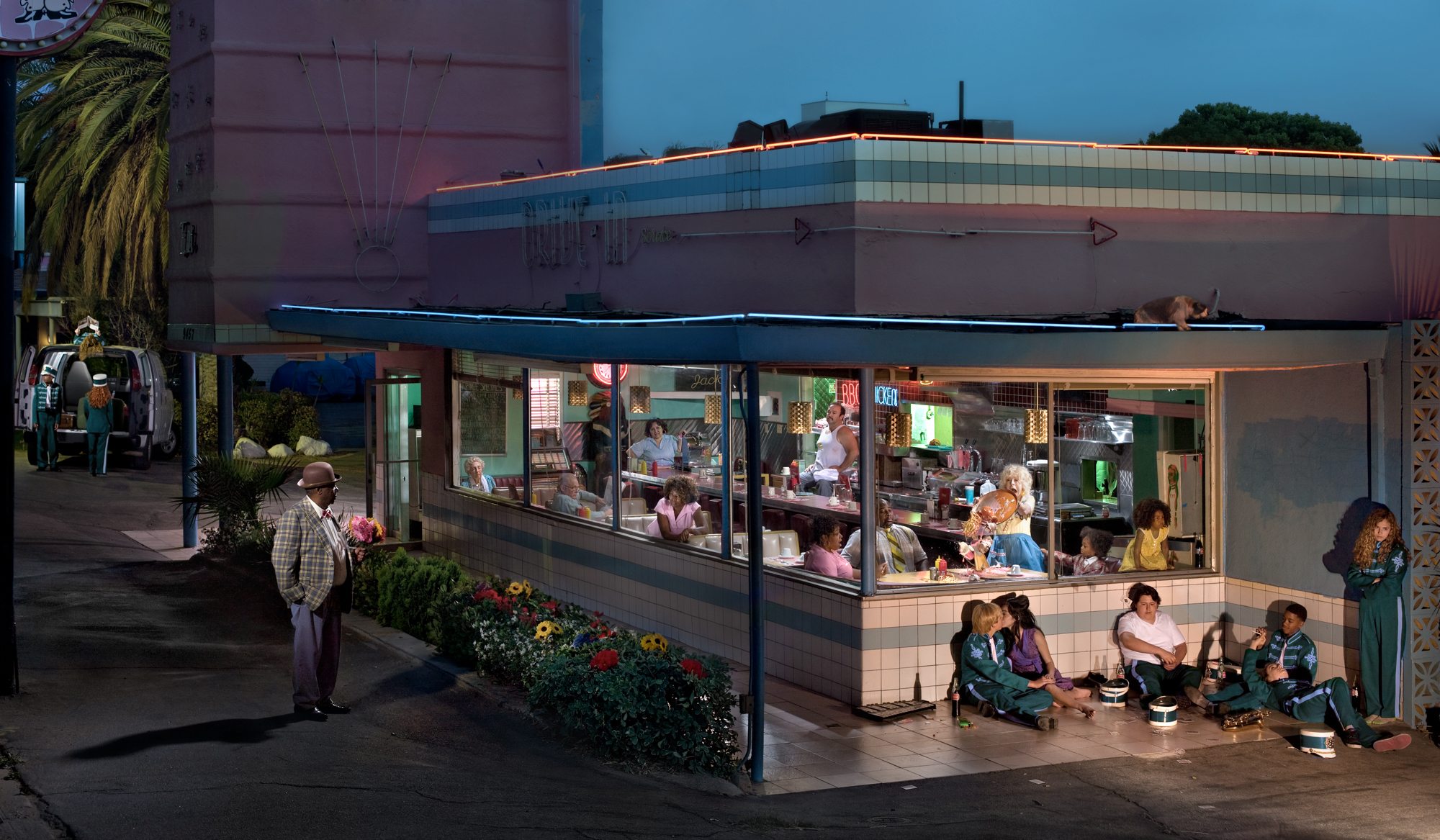 Usually, Schude finds a fascinating location and lets it drive the scene. “I see a place I like, and then I come up with an excuse to put people in the frame,” he says. But in this case, he had a story in mind—a forlorn couple breaking up in an old-school diner—but no set. He drove around L.A. looking for the perfect restaurant, but various owners told him they’d charge up to $10,000 to rent it out for the day. Eventually, he found this abandoned diner, ready-made for film and photo shoots, for $1,500. He hauled in spotlights for each of his characters and lightbulbs for the diner that synced with the shutter like a flash. During the shoot, he was on the phone with his brother, who was inside the diner, to make sure the server dropped her plate at the right moment. Looking back, Schude has one regret: the strange, slightly blurry appearance of the cat on the awning. It belonged to a 14-year-old who’d answered a Craigslist casting call. Seeing her atop the roof, trying to keep the cat in place, he realized, “Oh, this could be a liability issue,” he says. “Thankfully, the cat never jumped off.”

Schude and Randolph teamed up again at Phoot Camp 2012 for this Wes Anderson–themed summer camp creation. It was a hectic shoot: megaphone in hand, Schude raced back and forth across the bridge, directing the various scenes and hiding behind trees as he fired the camera with a remote. “Picking the frames to use in the final image is my least favourite part of the process,” he says. “I have so much anxiety about picking the best frames, so it takes me forever.” 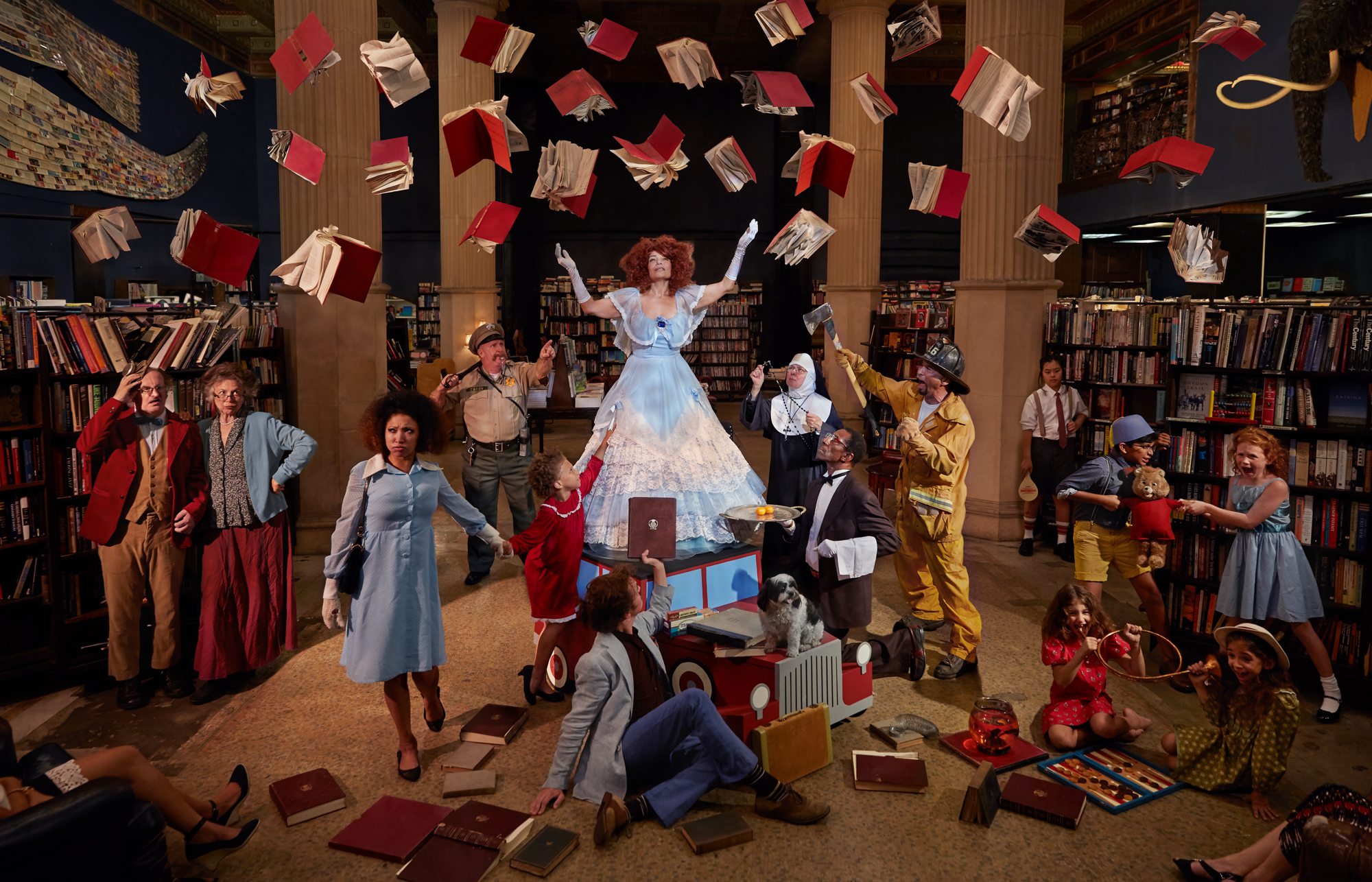 Schude released a self-titled book of photos in 2015 at the Last Bookstore in L.A. “I didn’t want to do a signing,” he says. “That would have been boring.” Instead, he orchestrated a tableau inspired by three scenes in F. Scott Fitzgerald’s short story O, Russet Witch!, assembled in real time for guests. Schude hung 30 shellacked books from a bar above the frame, and counted down to zero every time he took a shot, at which point all the characters would shout, startling unaware book browsers. The book store eventually wound things down, but Schude says he would have liked more time to get the shot. “This one looks a little too surreal for me, actually.” 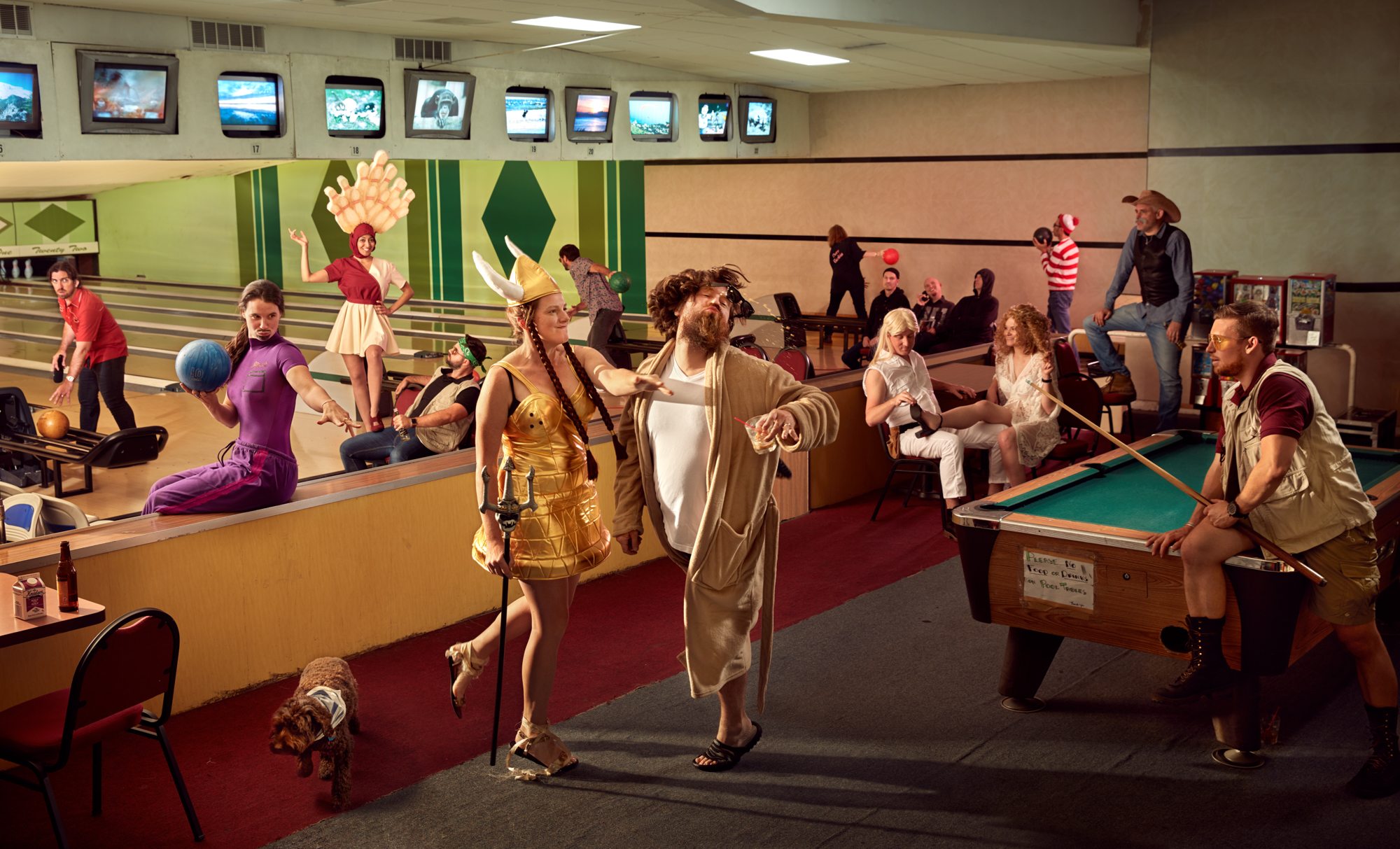 Schude shot this Big Lebowski–inspired scene at another photographer summit called Geek Fest. As usual, he had prepared a spreadsheet outlining the various mini-scenes, but he says the participants’ costumes and enthusiasm made the shot even better than expected. Regular bowlers watched the shoot unfold with curiosity from other lanes, but the alley manager wasn’t so thrilled. “I booked five or six lanes and explained to the manager what we were doing beforehand,” Schude says. “But of course when we actually did it, he claimed ignorance and said, ‘I didn’t know it would be this elaborate!'”