Q&A: Katrina Onstad, author of The Weekend Effect, a call to arms to rediscover the lost art of leisure

Q&A: Katrina Onstad, author of The Weekend Effect, a call to arms to rediscover the lost art of leisure

Free time is at an all-time premium. In the choppy gig economy, everyone is always on call and leisure hours are fleeting. When people do find time to relax, they feel lazy or guilty. Is there still time to save the weekend?

Toronto journalist and author Katrina Onstad offers up a few answers in her new book, The Weekend Effect: The Life Changing Benefits of Taking Time Off and Challenging the Cult of Overwork, on sale April 18. It’s part diagnosis, part prescription—an account of the history and importance of a leisurely weekend and how ignoring it could literally be the death of us. We asked Onstad what went wrong and how to win back our downtime. How was your weekend?
My family did something I highly recommend in the book: we got out of the city. We drove to Halton Hills with our crazy dog and our kids and went hiking on an unmarked trail. It was incredibly calming and rejuvenating.

At what point in your life did you sense that the weekend was starting to slip away?
I was working in television production, nine to five in an office, while my writing career was percolating on the side. I was acutely aware of never being “off,” and my family was feeling it, too. The weekends just didn’t leave us feeling rested and bettered.

Sunday night morphed into Monday morning?
We actually ended up feeling like, “Thank God it’s Monday,” because the weekends just left us wiped out.

One of the central ideas of the book is that our slavish commitment to checking emails at night and on weekends has essentially turned us into “low-stakes doctors always on call,” as you describe it. Is that behaviour driven by a fear that everyone else is doing it, and if we don’t, that there are plenty of other workers who will?
This is the struggle. It benefits us to look like we are totally immersed in work. In these economically shaky times, no one wants to be the person who packs up at 5 p.m. If the person in the cubicle next to you is going to stay until 11 p.m., they are going to look like a better employee.

What needs to change?
We need to look at this as a public health issue. Overworked and burnt-out employees are less productive, make more mistakes, are less happy, have more mental health issues, and so on. The risk of stroke among employees who work 55 or more hours per week is 33 per cent higher than those working a 35- or 40-hour week, for example. There are actually governments around the world that are protecting the weekend. France just enshrined the right to disconnect on the weekends and at night.

Do corporations have a responsibility?
Corporate leadership can help. Innovative companies seem to be realizing that this is just not sustainable—burnt-out workers do in fact have negative repercussions.

Any stand-out examples?
Google did an experiment called “Dublin Goes Dark,” where they had their employees leave their devices at work on Fridays and pick them up on Monday, and they reported blissfully chill, rejuvenated workers. There’s also a surge of “time protecting” software for businesses, which, during off-hours, lets employees announce: “Hey, I am not working right now. Sorry!” That simple gesture sends such a strong message. It acknowledges that people have lives beyond work, which is a reality workplaces culture often suppress. Workers have to perform being “all-in” whether they are or not.

Do we ultimately have any power to do anything about this on a personal level? Aren’t we just beholden to the rules of the game?
We need to address our own personal commitment to time off, which is very hard to do because the system is working against us. We have to decide on a personal level—how much does it matter to us to protect that time to make sure that our weekends are not just binge-watching TV?

Any examples of people who have disconnected from work on weekends and found themselves better for it?
TV writer-producer Shonda Rhimes, who works more than anyone, has a strict policy against email on weekends or after 7 p.m. She says she’s reclaimed her life and never missed anything urgent since invoking this rule—and she receives 2,500 emails a day!

What are the most important things we are losing?
Sadly, community and connection are usually the first things to fall off the schedule due to the cult of overwork.

In the book, you mention that Aristotle’s ideal of a good life includes leisure—that leisure is freedom. How did a generation raised on Ferris Bueller’s Day Off lose sight of that?
There’s a palpable equation of overwork and success out there: profiles of CEOs always include the requisite “And she works seven days a week with two hours sleep!” line, as if it deserves a slow clap. Advertizers love to use busyness to flag fabulous lifestyle, especially in car ads. Look at the recent campaign by Fiverr that appealed to the vanity of entrepreneurs with the line: “Sleep deprivation is your drug of choice.” So, when all of our time needs to be focused on productive activity, it becomes harder and harder to blow off work to go to the art gallery and have a profound interaction with a piece of art, like Cameron did in Ferris Bueller.

You mention missing the feeling of being bored when you were young. Is that sense of boredom something that digital natives will ever experience, never mind miss?
At its best, being bored means you are free to ponder and wonder. I mean, we all do this, but when you have a device in your pocket, it’s hard not to check it when you are standing in line. Before, that would have been a space for your mind to go places it normally wouldn’t.

In the book, you question whether brunch is a worthy thing to do on a time-strapped weekends. What are your thoughts on the notion that “activism is the new brunch”?
I think that is a bit cynical. Brunch is this performance piece that people enact in urban centres, which says, “Look at how much disposable income I have,” and, “Look at how much time I have” to be able to stand in line for three hours to drink overpriced mimosas. It’s one of those weekend activities that leave people feeling really hollow. Whereas with activism, we do have a profound, deep need to connect with other people and express ourselves. It’s a good thing to be engaged in the world. That said, since the Kendall Jenner/Pepsi fiasco, I do keep hearing, “activism is the new brunch.”

In researching the history of leisure and the concept of the weekend, what surprised you the most?
Lots of things, but the one that keeps coming up is the fact that Medieval peasants actually worked less than we do. They worked where they lived, they had long naps in the middle of the day, they had a lot of religious holidays, and they’d check out of work at the drop of a hat: “Hey, a juggler is in the town square, gotta go!”

Anything in particular, good or bad, that strikes you about Toronto’s attitude to work-life balance?
I think Toronto is a workaholic city. The first question you get when you meet someone is “What do you do?” instead of “How are you doing?” There is a real danger of merging work and self, and losing sight of the fact that we need to have meaningful existence beyond the office. Can you be a person outside of work?

You suggest that Silicon Valley holds much of the blame for popularizing the cult of overwork. They have the Burning Man festival to blow off steam. Does Toronto need some drum circles to chill out?
It would be great to decompress once a year at a festival like Burning Man. I would totally go. But I’d rather see is a city where looking busy isn’t a currency, where everyone didn’t start a conversation with the proclamation, “I’m so busy!”

Now that you’re finished the book, how good are you at following your own advice?
I did take part in the National Day of Unplugging last month. What was interesting was that it changed the geography of my house: I started using areas I don’t ordinarily hang out in because they’re not associated with my computer. But I’ll admit that last weekend I spent many hours working, and it sucked. I was mad at myself about not planning better to protect that time, so I followed up by dragging my family to the woods on Sunday. Even during crazy crunch time, a couple of beats of actual respite and beauty, some time that’s not about work or consumption—that is enough to declare a weekend a success. 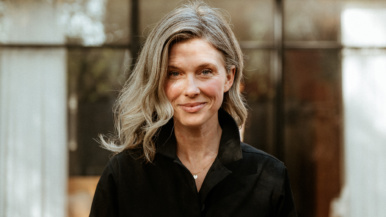 Novelist Ashley Audrain is the buzziest thing in literature