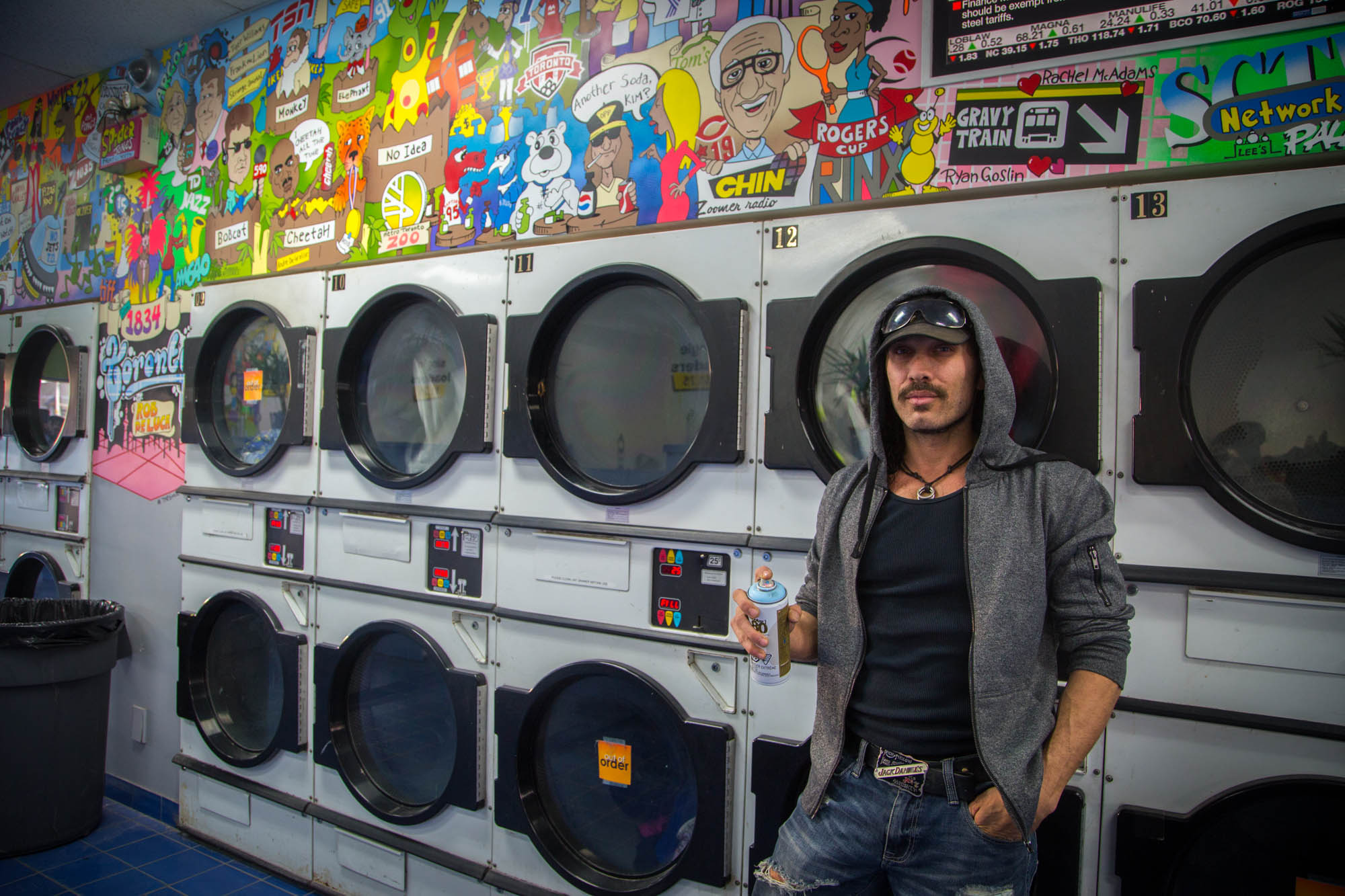 Last April, cartoonist Robert De Luca was living with depression and wanted something to take his mind off his troubles. That’s when he decided to start painting a 115-foot mural he calls #the6mural on the walls of the Monte Carlo Laundromat, a North York business that he co-owns with his brother, Nino. “It was my therapy. It’s helped me heal when I was at my worst,” De Luca says. “When I painted, it was just me and my wall.” 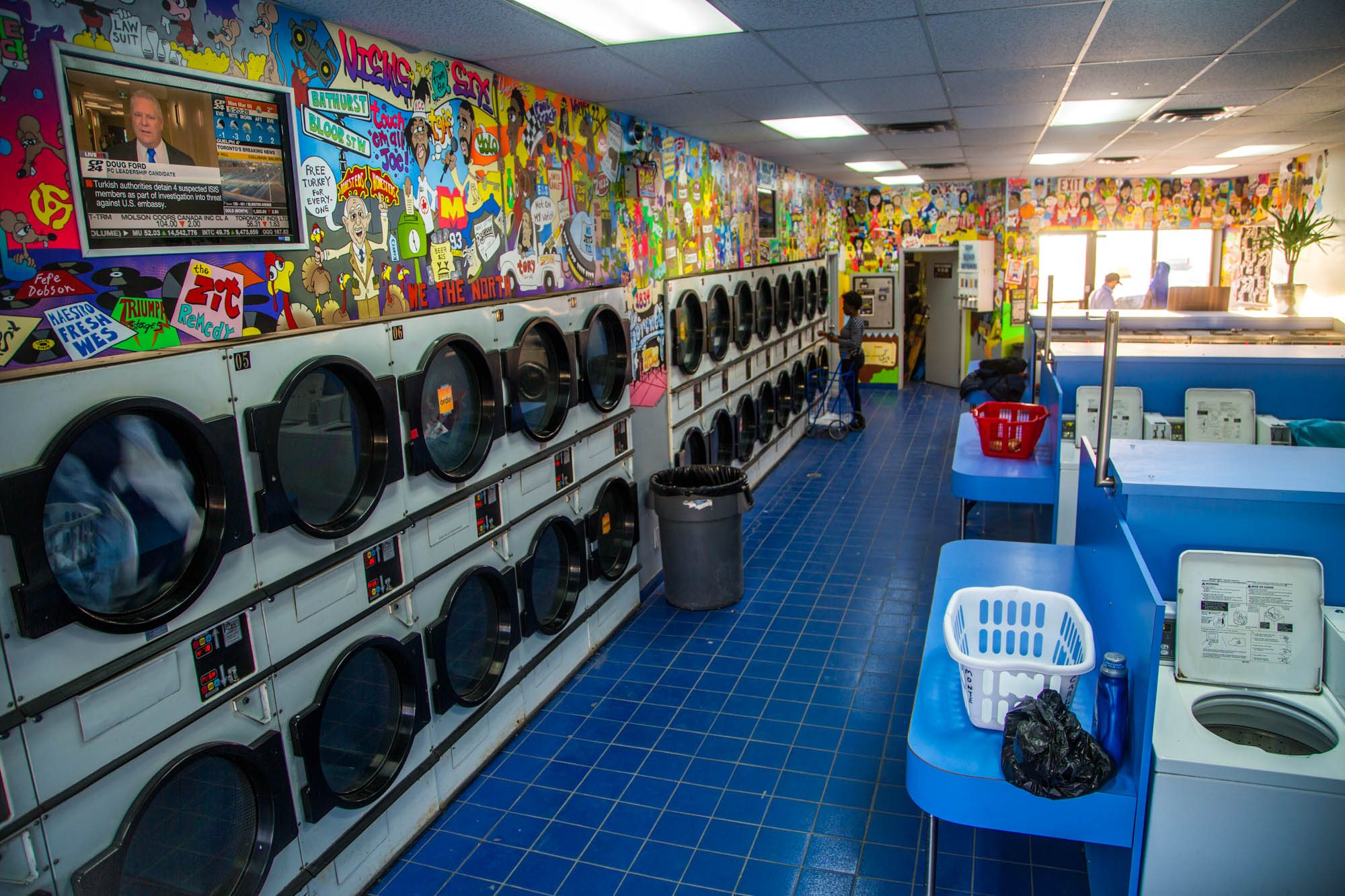 Although De Luca has always loved drawing cartoons, this is his first mural. Originally, it was supposed to take over one wall of the laundromat and be 40 feet long, but 660 hours later, he’s still painting. “I would start painting at midnight when the laundromat was closed,” he says. He’s currently working on the sixth wall, and he expects to be finished the project in June. Using a ladder, paint markers and spray paint, he’s finished more than 460 figures—people, places, signs and logos that are all connected to the city of Toronto.

One of the mural’s busiest sections includes the boxer George Chuvalo (far left), Blue Rodeo fronman Jim Cuddy (far right), the Cash Cab (bottom left) and an ode to all of Toronto’s festivals. “In this section, I painted people I remember growing up, like [reggae musician] Snow and Sam from Today’s Special,” says De Luca. “Certain events also stick in my head, like the concert for SARS”: 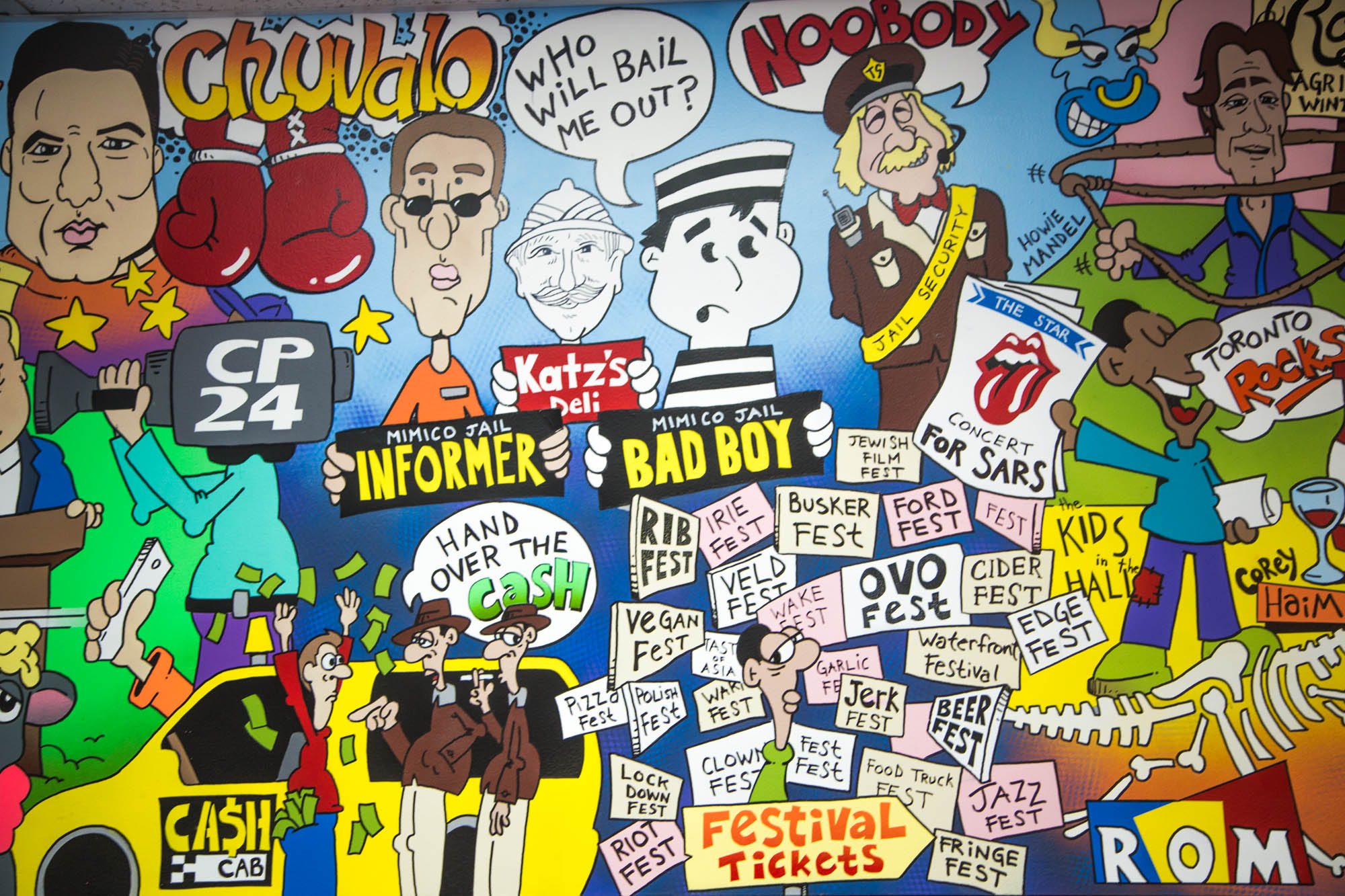 “Growing up, Prince was one of my favourite artists, so I needed to paint him on my wall,” says De Luca. “The fact that he owned a house on the Bridle Path was a perfect excuse to add him.” This section also includes a young Justin Bieber and a couple of Blue Jays greats, Roberto Alomar and Jose Bautista: 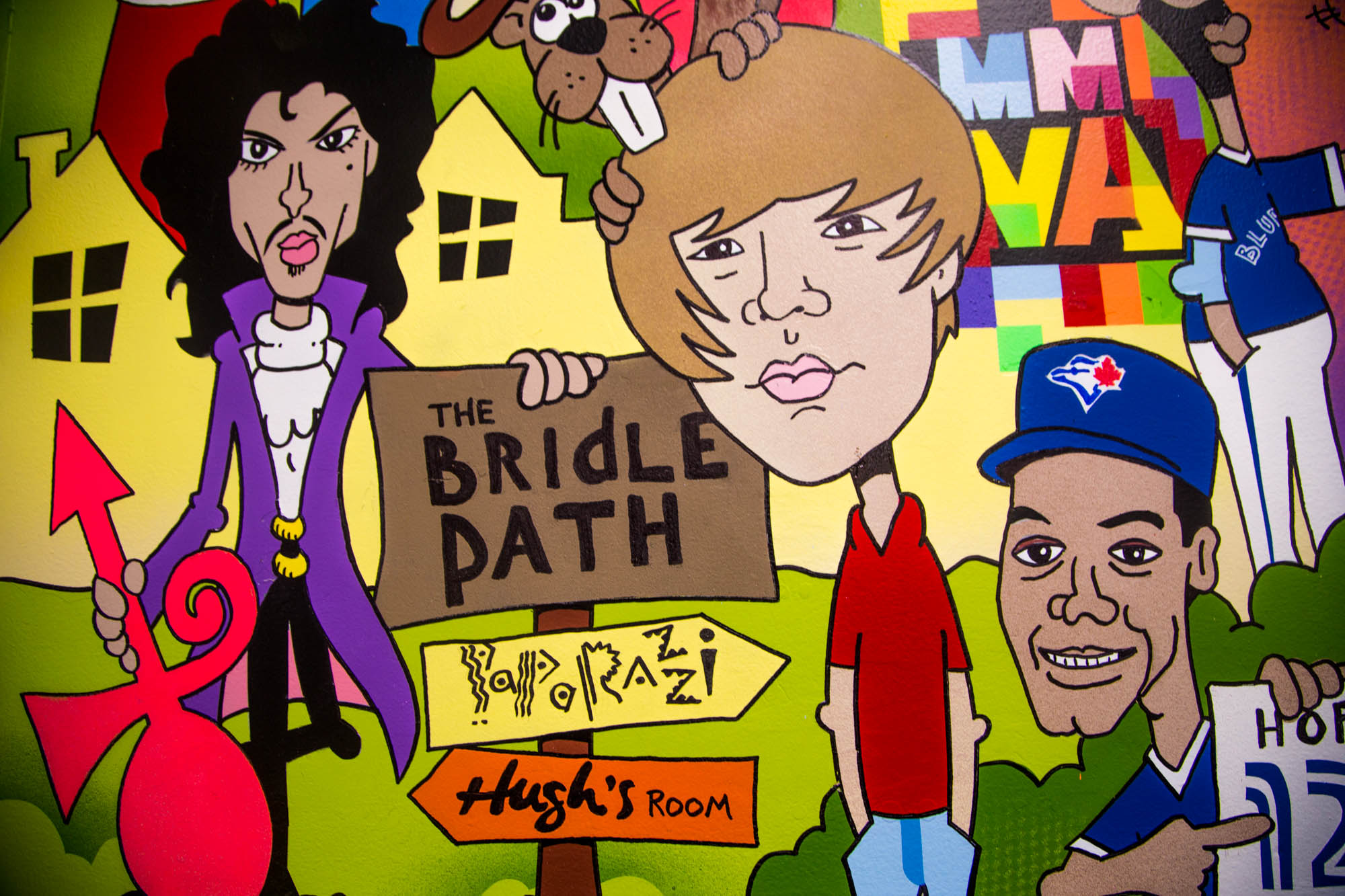 “I paint whatever is popular in Toronto, but I tend to also include memories I have from growing up in the city,” he says. For example, CHIN’s Johnny Lombardi (bottom right), Polkaroo (top left), Knob Hill Farms (top right) and Max Webster frontman Kim Mitchell (bottom middle, with the OPP cap): 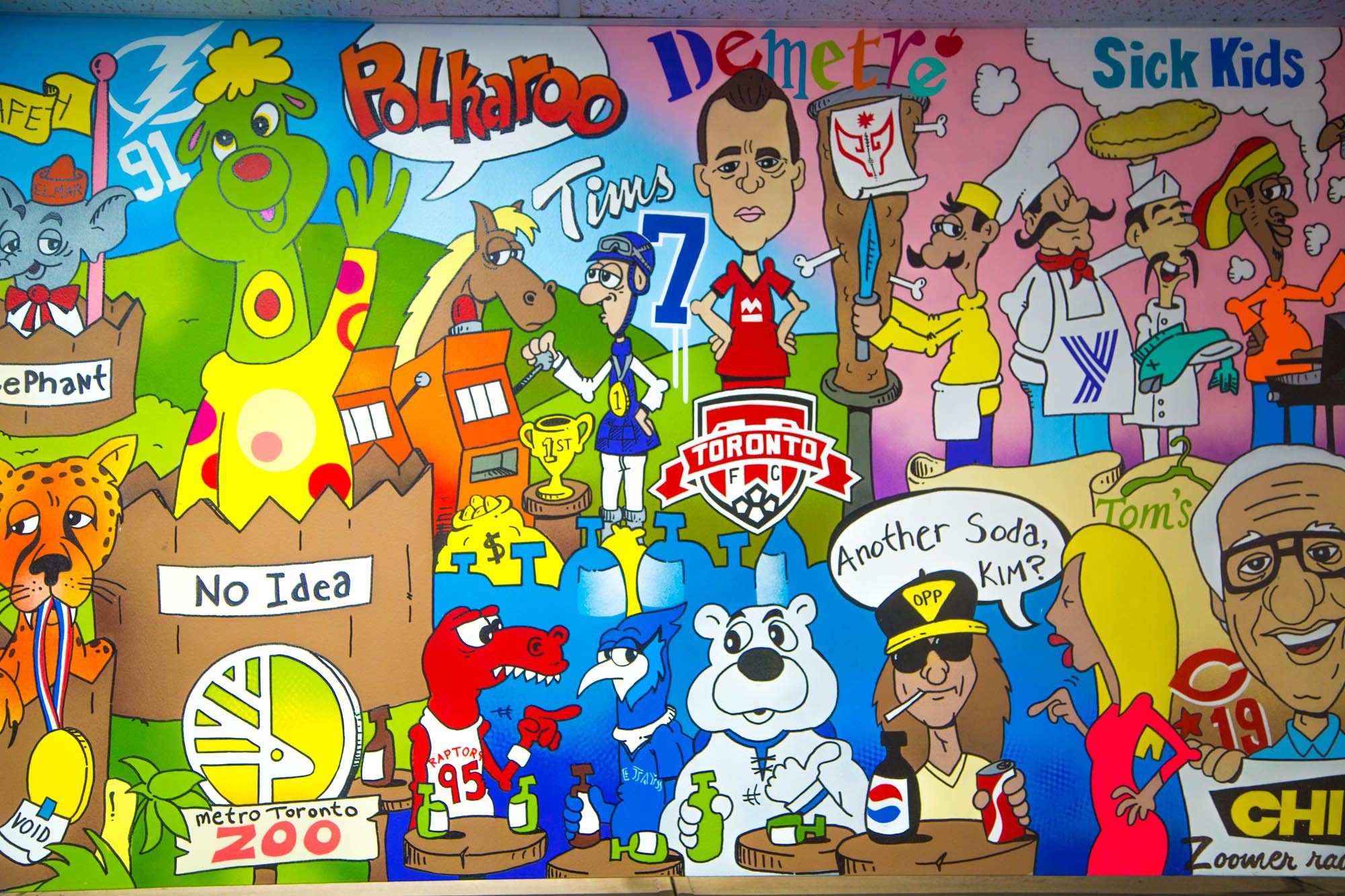 One of the more recent sections of the mural includes Russell Peters, Auston Matthews (“I had to add my favourite hockey player”), and the showdown between Mike Tyson and CP24 anchor Nathan Downer. “That absolutely had to make my wall,” he says. “That moment made the news all over the world”: 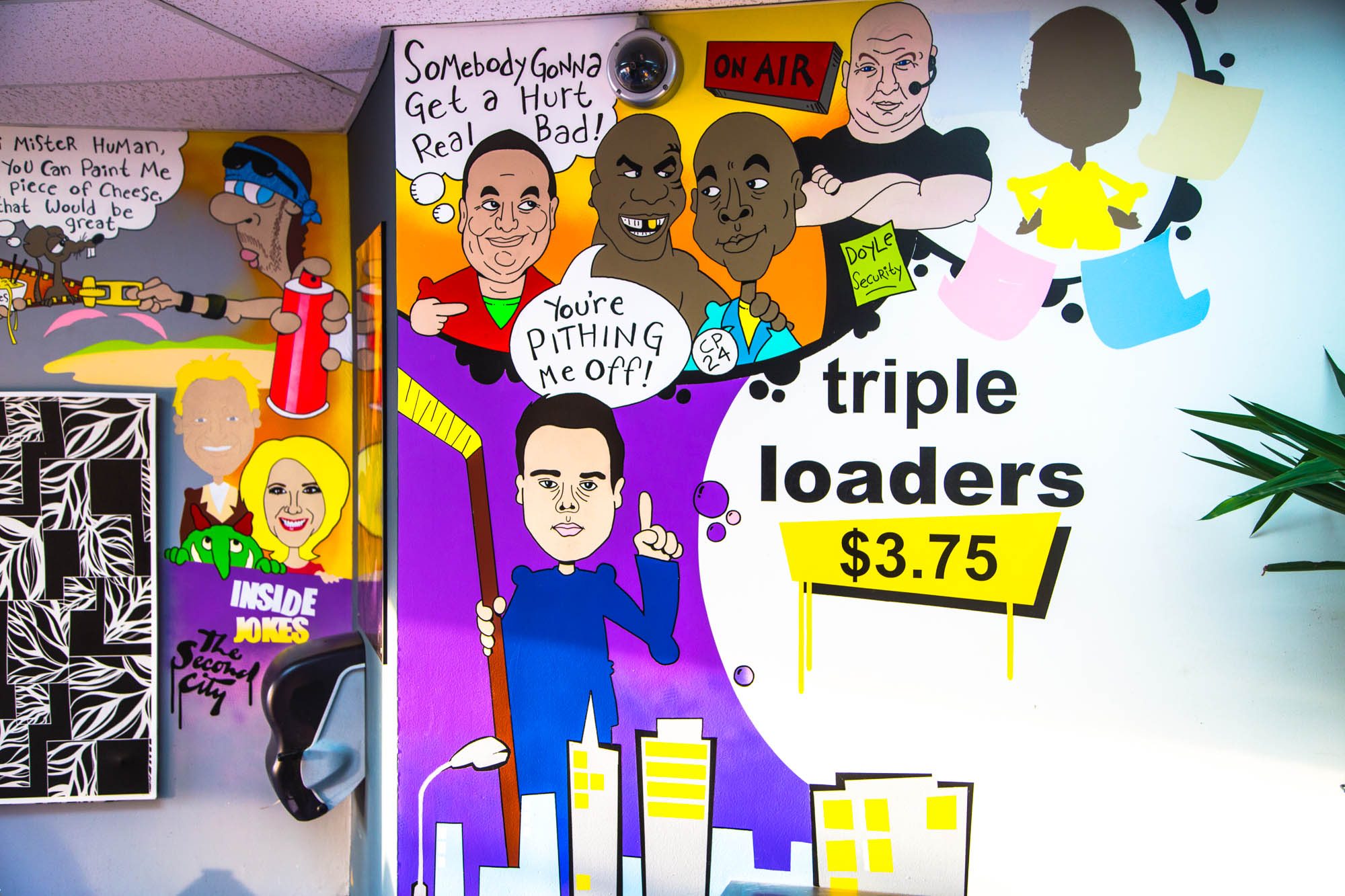 “Drake definitely put Toronto on the map worldwide, so I saved a big portion for him and his connection to the Raptors,” says De Luca. He tries to weave several narratives together when he can: Drake isn’t just performing, he’s wearing the key to the city, and dancing on top of a Degrassi newsletter and the Raptors slogan he helped create. “It’s not always about just adding people to the wall. I like to create humorous storylines within my cartoons.” Also pictured: DeMar DeRozan, a pre-haircut Weeknd, Honest Ed’s and John Tory, who paid a visit to the laundromat last week: 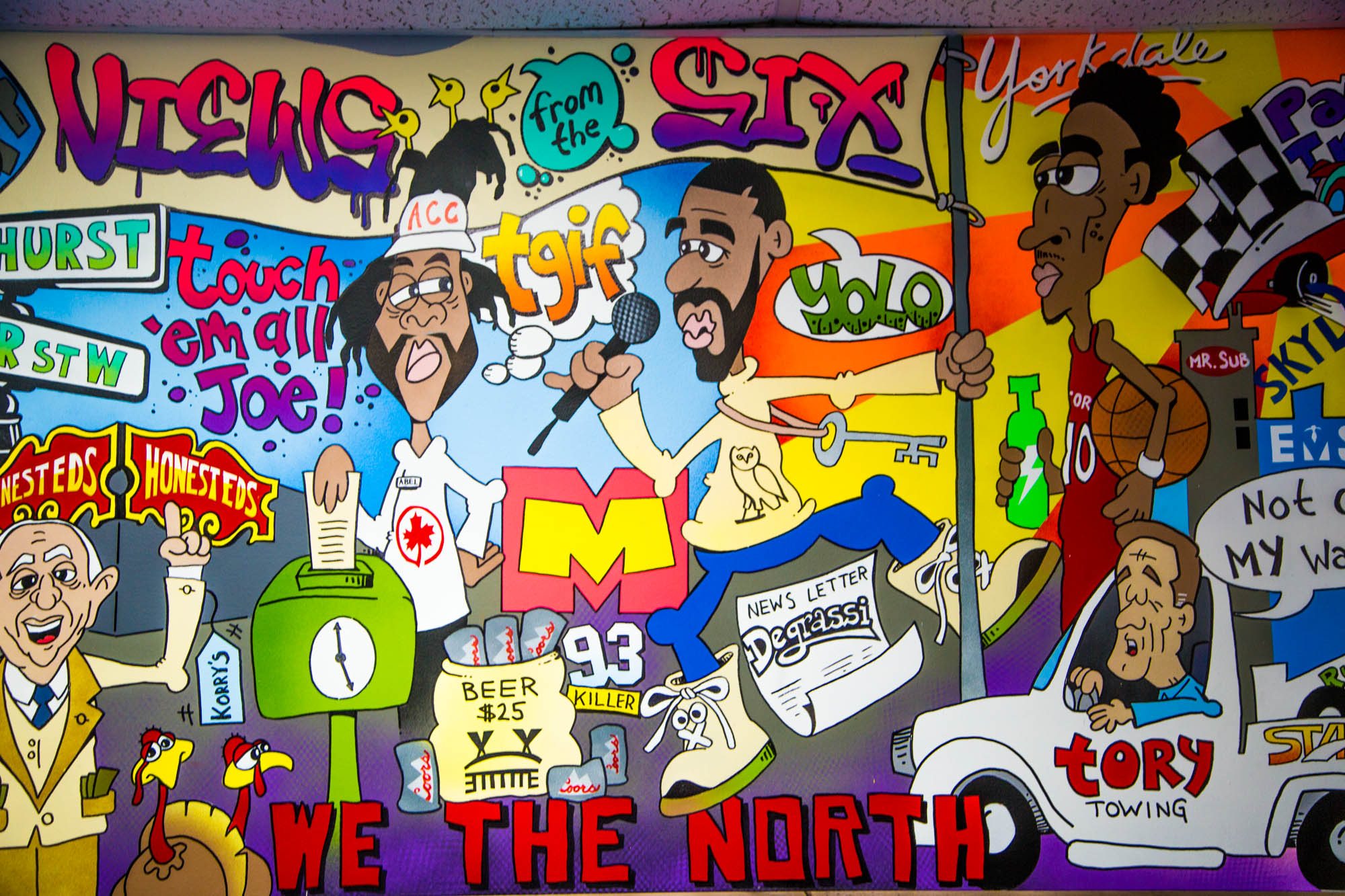 This section of the mural, currently in the works, features the city’s skyline: 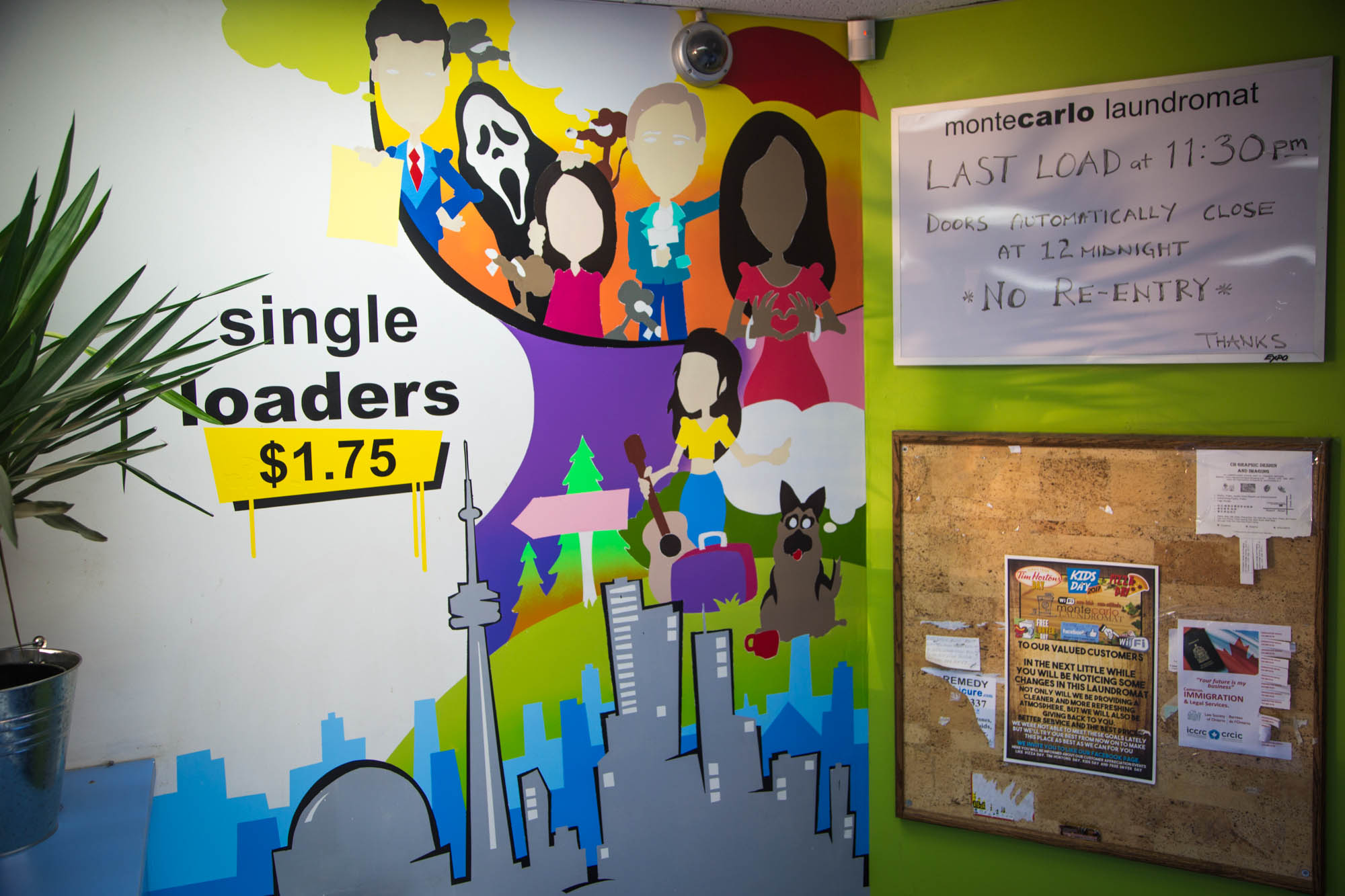 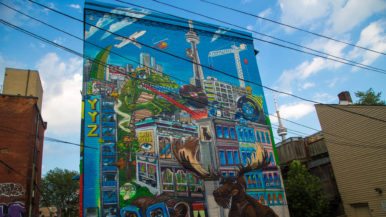 Every Toronto reference (we could find) in Uber5000’s new mural