Like Dr. Jekyll, Kirk Hammett lives a double life. Most know him as the lead guitarist of Metallica, but when he’s not shredding on stage he’s curating one of the largest private collections of cinema art.

First exhibited (fittingly) in Salem, Massachusetts, Hammett’s collection of memorabilia is now on display at the ROM until January 5. It features dozens of rare posters that chart the evolution of horror and sci-fi from the 1920s to the 1980s, from the mysterious Count Orlok in 1922’s Nosferatu to George A. Romero’s (many) zombie apocalypses. Here’s a sneak peek at the exhibit. 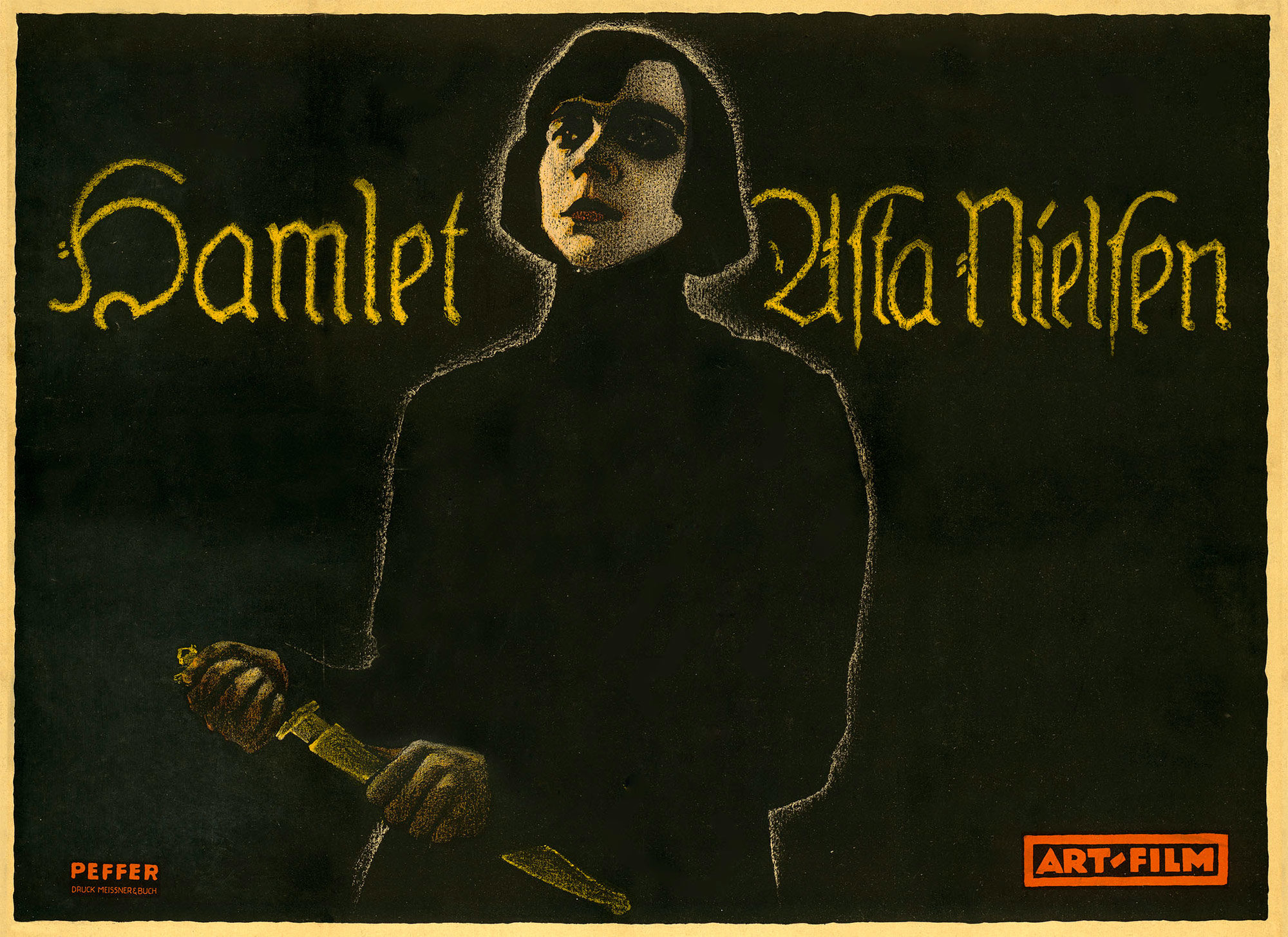 This German adaptation offers a radical gender-swapping reinterpretation of Shakespeare’s tragedy. It features a female Hamlet (played by Danish silent film actress Asta Nielsen, pictured here) who, forced by her mother, conceals her gender and lives as a man.

This unauthorized adaptation of Dracula has given the cinematic world some of the creepiest and most enduring images in horror history. Its star, Max Schreck, is featured on the poster, which was created through direct lithography—a popular printing process in the late 19th and early 20th century. “With direct lithographs, you draw onto a stone plate,” says coordinating curator Arlene Gehmacher. “When you look at the Nosferatu poster, you can see that the texture is more nubbly. That’s because it’s a direct transfer from the stone to the paper.” Today, most commercial printing uses offset lithography, where the drawing is transferred from a metal plate to a malleable rubber surface, then stamped onto paper. 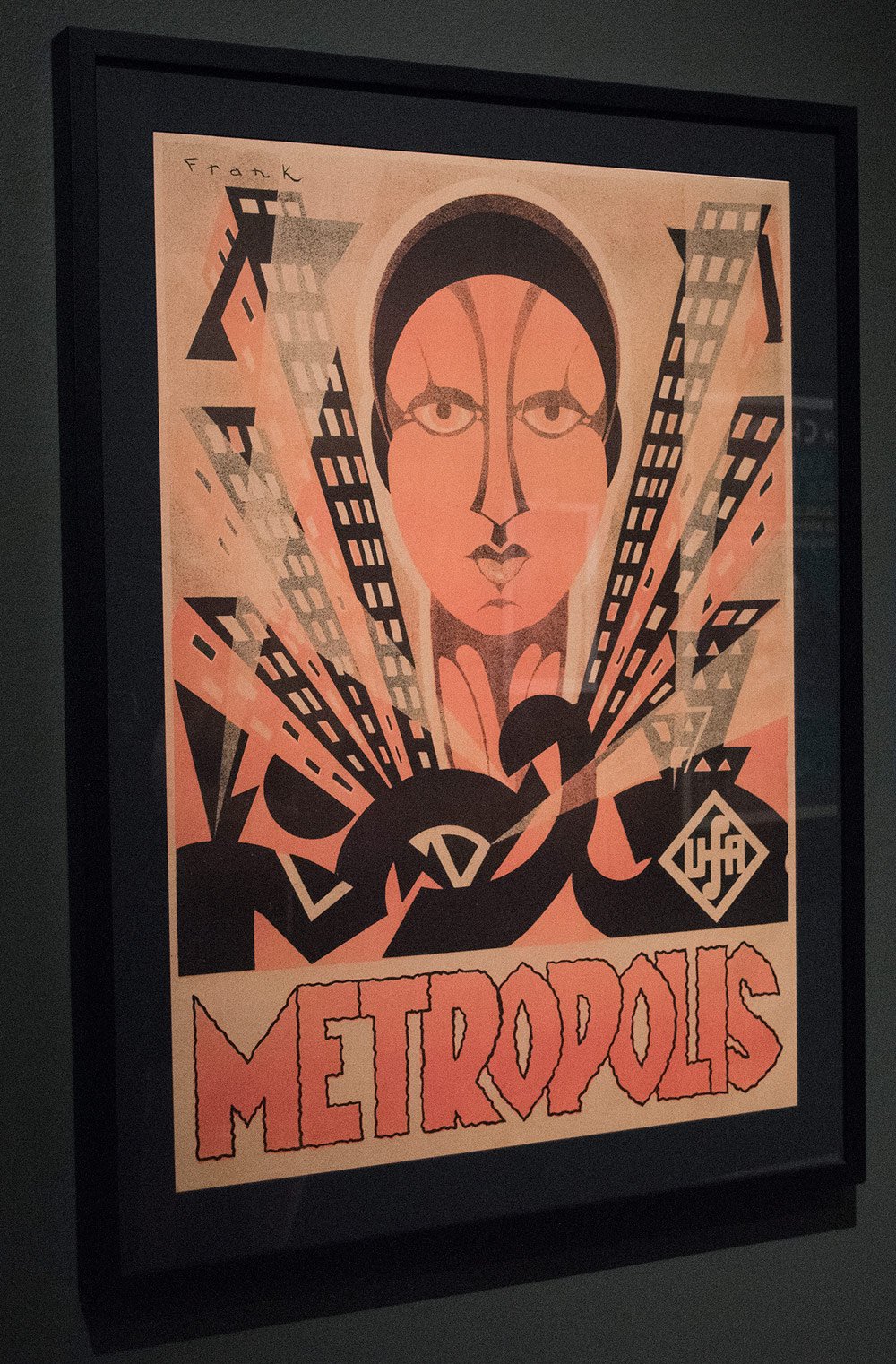 In this German expressionist classic, ill-treated workers toil beneath the surface of the earth while oligarchs live in a blissful utopia above them. In an attempt to quash a rebellion, a powerful leader in the ruling class creates a sinister robot clone of Maria (Brigitte Helm), a benevolent woman who cares for the workers’ children. Almost all advertising for Fritz Lang’s sci-fi masterpiece features Maria’s mechanical doppelganger, but this poster is different. “Here, it’s somewhere in between,” says Gehmacher. “The lips are very pouty, which is such an essential element of the human face.”

London After Midnight might have achieved cult status, thanks to legendary horror icon Lon Chaney Sr.—who stars as creepy professor and amateur hypnotist Edward C. Burke—and director Tod Browning (of 1931’s Dracula and 1932’s Freaks), but all copies of the 1927 version have vanished. The last verified reel was destroyed in the MGM vault fire of 1965, so it has become something of a Holy Grail of lost movies. For now, this rare poster is all that’s left of the film. 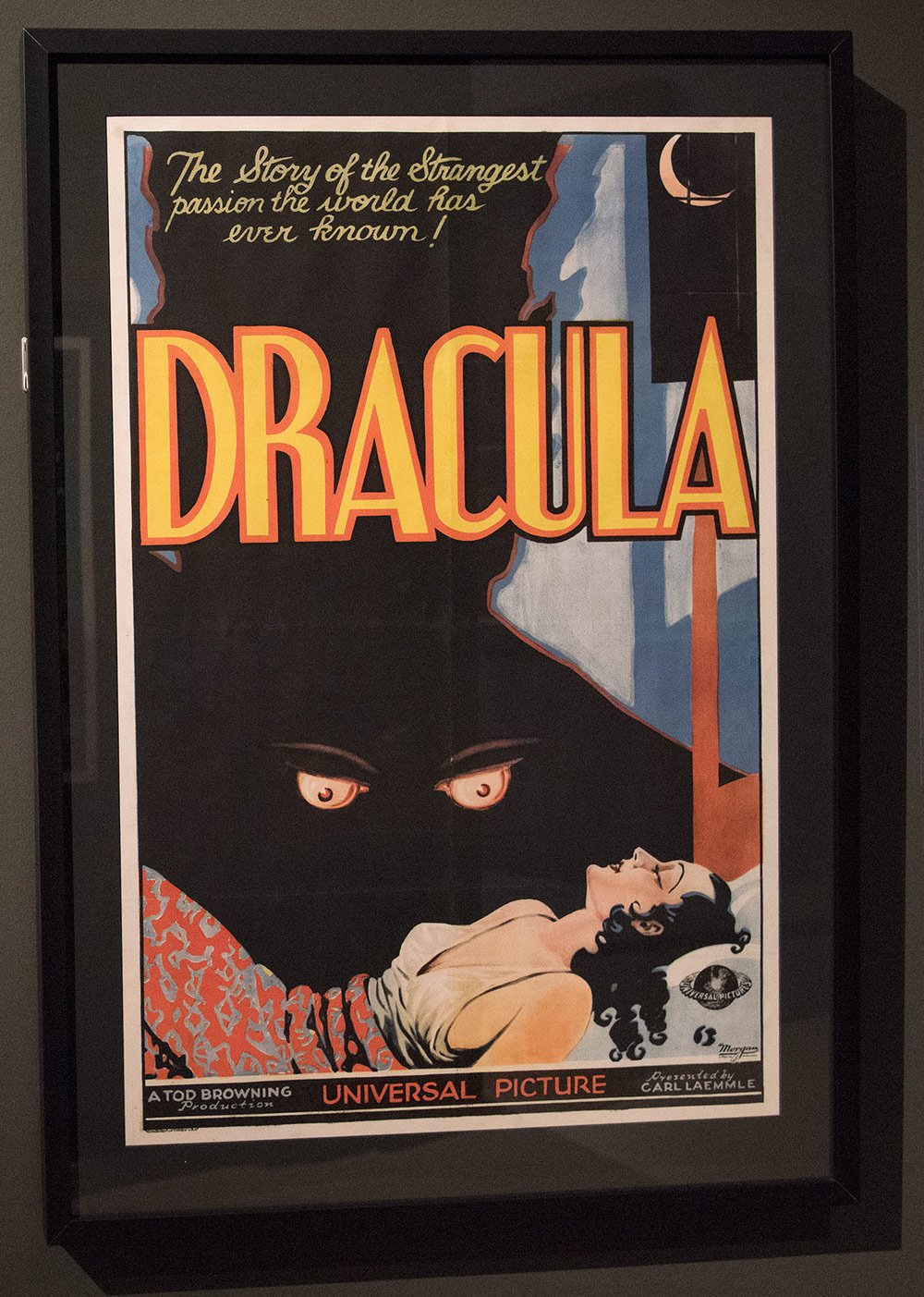 Up until 1927, all horror films were silent. The genre entered the talkies era with Dracula and Frankenstein, which simultaneously launched Universal Pictures’ horror brand, turned Bela Lugosi and Boris Karloff into the genre’s biggest stars and established the iconic images for their monsters, which have endured to this day. The intermingling of horror and sex in Bram Stoker’s story was a huge lure back in the day. Both the film and this poster were produced a few years before the introduction of the Hollywood Production Code, which banned everything from kisses exceeding three seconds to curse words. 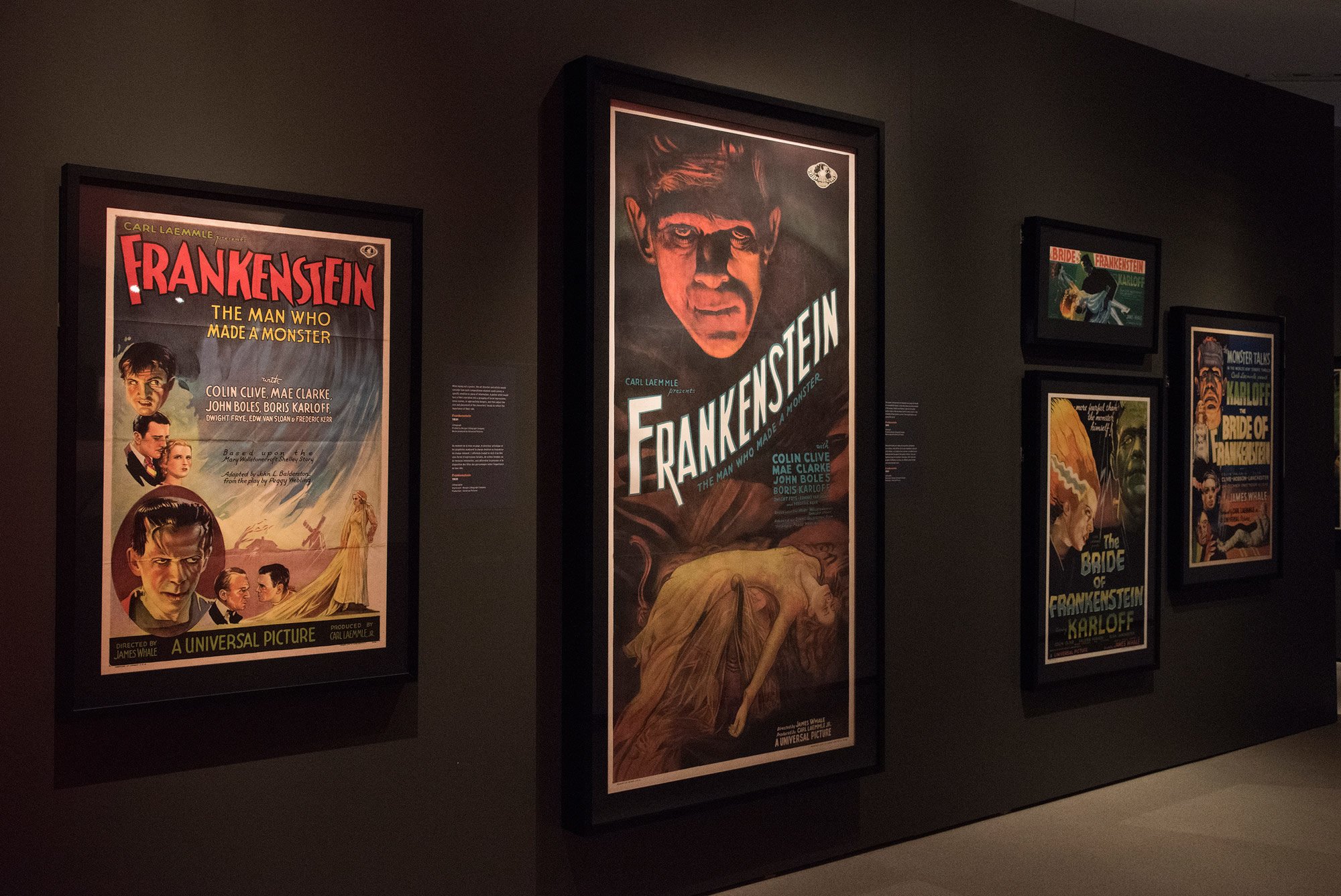 Bela Lugosi’s tenure as Hollywood’s biggest horror star lasted only a few months. Universal capitalized on Dracula‘s success with an adaptation of another literary shocker, casting a little-known character actor named Boris Karloff in the monster role that Lugosi passed on. Posters for Frankenstein are among the most sought-after by collectors. Hammett owns what is believed to be the only surviving copy of this version from the film’s original run. 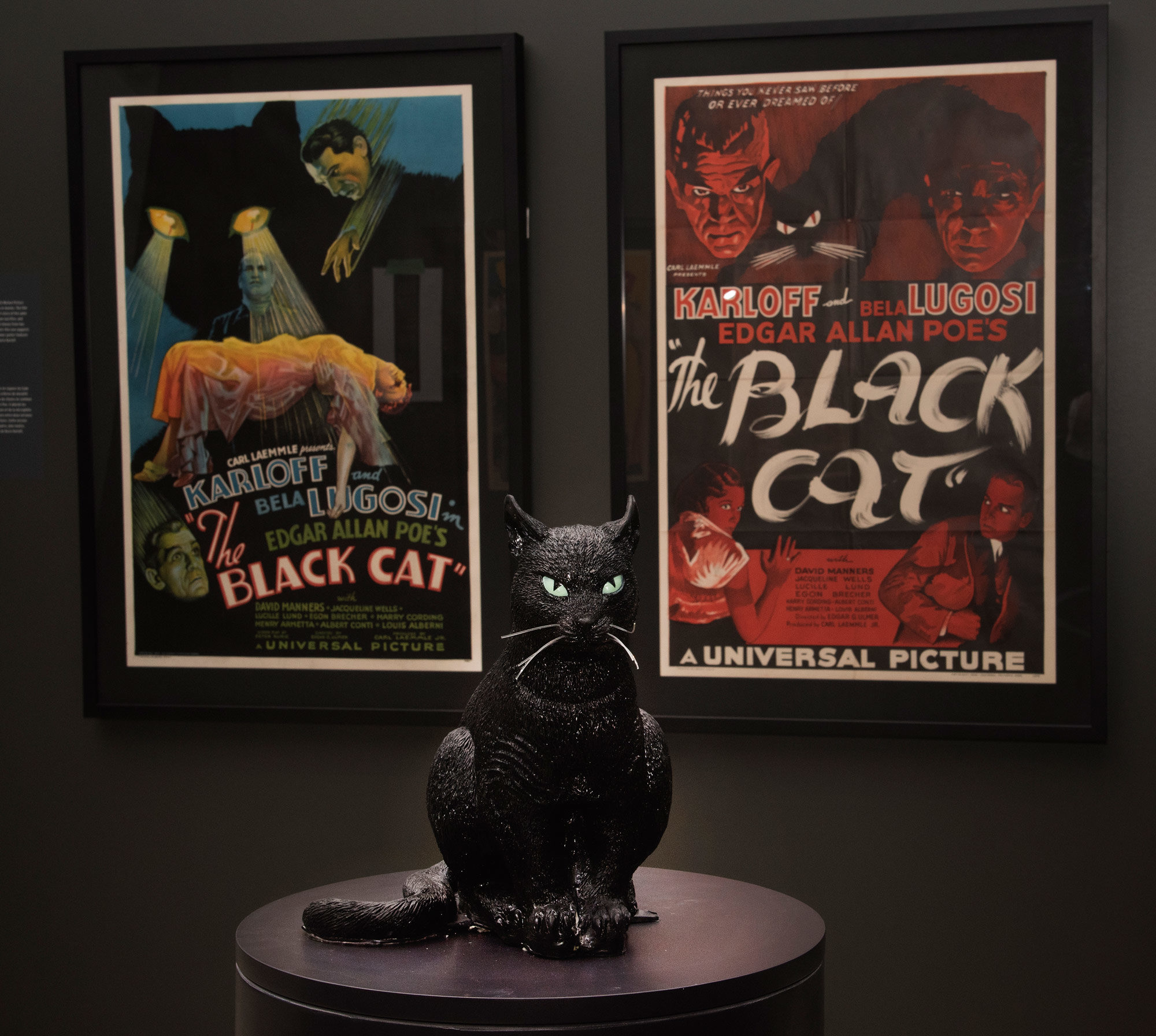 The Black Cat was the Freddy vs. Jason of its day and the first of many team-ups between horror’s leading boogeymen, Karloff and Lugosi. While Edgar Allan Poe shares above-the-title billing, the film has little to do with his short story. Instead, it ventures into some pretty disturbing subject matter (think satanism, necrophilia, incest) that Poe opted to leave out of his novels. The poster on the left, from the film’s American theatrical run, ranks among the most expensive. One sold at a 2007 auction for a cool $286,000.