As summer eases into fall, the Charlevoix region—one of the most beautiful regions of Quebec—serves a multitude of sensory delights. Designated a UNESCO World Biosphere Reserve in 1988, the natural splendour of the region encompasses lush forests, pristine rivers, mountains and rich farmlands. These provide a playground for adventure-seekers, heavenly vistas around every turn on the road, and fabulous experiences for foodies. Located just over 90 minutes from Quebec City by car, with plenty of beautiful places to stop along the way, Charlevoix makes for a delightful fall trip. Here are seven reasons to head there this autumn:

This region is full of beautiful villages—six of which that are part of the Association of the Most Beautiful Villages of Quebec—and towns filled with delightful places to eat, shop, and wander while enjoying the historic buildings. Baie-St-Paul is a delightfully old-fashioned and highly photogenic destination. Trek along the two-kilometre-long Saint-Jean-Baptiste Street, filled with brightly painted storefronts. There are also cafes that spill out onto the sidewalk, art galleries, artisan boutiques and plenty of restaurants. You’ll hear locals refer to this street as “La Main” and it has long been a hub for culture and celebration—back in the early 80s, the first performances of Cirque du Soleil were held here at summer street fairs.

La Malbaie offers many adventures and is doused in rich history, offering a glimpse at the bourgeoise of the past. Its breathtaking views and maritime charm have entranced affluent visitors for centuries, positioning itself as the heart of resort vacationing in Canada. Jog—or cycle—through the 6-km stretch alongside the St. Lawrence River, or engage in thrills at the Casino de Charlevoix. La Malbaie is home to some of Quebec’s most beautiful villages, like Cap-à-l’Aigle and Pointe-au-Pic—both of which are built hillside overlooking the river.

Escapades with whales on the St. Lawrence

The eastern part of Charlevoix runs alongside the St. Lawrence River and is home to the Parc marin du Saguenay–Saint-Laurent, the only protected marine environment in Eastern Canada and one of the best places in the world to observe marine mammals. This massive marine park provides fertile feeding grounds for many species of whale including the mighty blue whale, belugas, finbacks, humpbacks, and pilot whales, dolphins and porpoises. If you’re lucky, you may spot fin or minke whales from the shore, but sightings are far more likely as part of an organized tour with either AML Cruises that takes you out into the heart of the marine park on a large boat or zipping through the waves on a zodiac.

Direct from the farm

Charlevoix is full of farms that encourage visitors, with owners who are happy to show off their properties and processes. In Baie-Saint-Paul, the bucolic setting of Laiterie Charlevoix is perfect for a picnic after touring the cheesemaking facility and picking up goodies from the farm store. At the unusual and rather awesome Centre de l’Émeu de Charlevoix in Saint-Urbain, you can visit one of the region’s agritourist staples and interact with emus, learning more about their lives and habitat. The economuseum doubles as gourmet experience—offering a deluxe experience to savour emu meat—and luxury skincare ingredient exporter in its emu oil, known for its exceptional properties as an all-natural, sensitive-skin-friendly moisturizer. At Charlevoix Alpacas in Les Éboulements, take a guided tour of the farm, which includes time in the nursery with baby alpacas or an alpaca trek where you get to walk a fluffy alpaca through the farm property. 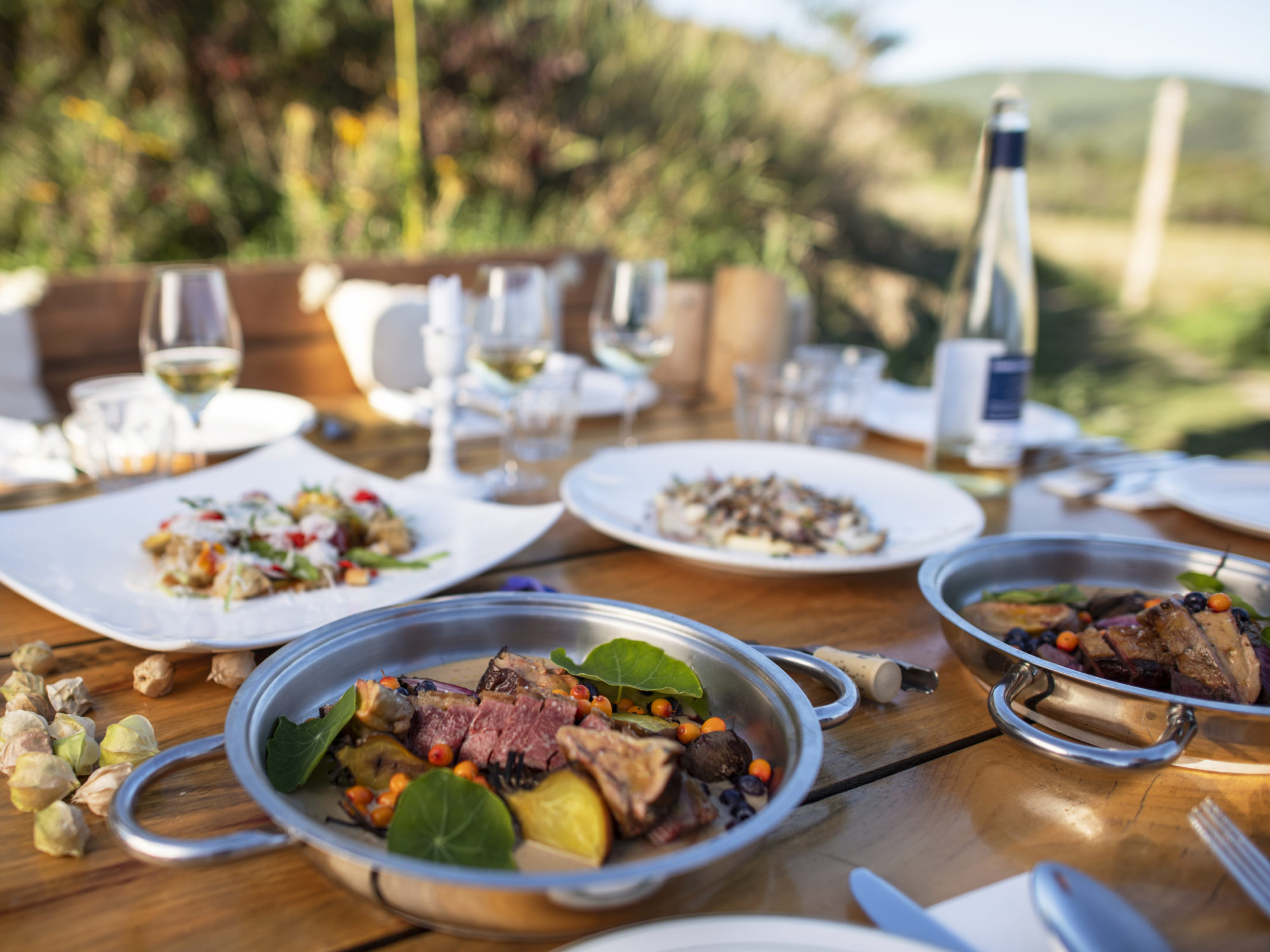 Not surprisingly, the abundance of farms—raising animals and growing produce in harmony with the land—is hugely beneficial to Charlevoix’s restaurant scene, as many of these eateries source from local producers to curate their menus, providing a symbiotic experience that shows off Charlevoix’s stellar agritourist nature. At many of the region’s restaurants, you’ll find dishes described with which local farm each cut of meat was procured from, as well as other pertinent info. This is certainly the case at the superb Faux Bergers in Baie-Saint-Paul which solely serves a seven-course tasting menu that passionately showcases the very best in regional cuisine and changes nightly. Le Saint-Laurent at the Fairmont Le Manoir Richelieu in La Malbaie serves up gastronomic delights next to a majestic view of the Saint-Lawrence River; try duck breast sourced from La Ferme Basque, served alongside confit rhubarb and a raspberry and red pepper sauce.

There are plenty of excellent casual dining options in Charlevoix. At restaurant and dairy bar Chez Chantal in La Malbaie, you can grab a juicy lobster roll or poutine, to be followed by one of their famous soft-serve ice creams made with real, locally-sourced cream. Restaurant Le Saint-Pub in Baie-St-Paul serves hearty upscale pub grub alongside tasting flights of their revolving selection of tasty beers brewed in-house. Full of epicurean delights, you’ll never go hungry wherever you are in this region.

The many museums of Charlevoix encourage visitors to immerse themselves in the region’s rich history. At the Musée maritime de Charlevoix, for example, you can climb narrow ladders to board historic schooners and peek into the berths and galleys and visit workshops that explain how the vessels are constructed. Visit Les Moulins de l’Isle-aux-Coudres to tour an almost two-century-old water mill, windmill, and miller’s house, each carefully restored to educate how flour was made. Be sure to pick up some of their traditionally ground buckwheat flours and pancake mixes to take home.

To get an in-depth education on the history and culture of this region, Musée de Charlevoix in La Malbaie has four galleries of art and artifacts, as well as a neat gift shop featuring crafts made by local artisans. Art has always been one of Charlevoix’s main fixtures—Baie-Saint-Paul is known to host the highest concentration of art galleries than in any other town in Canada. The region’s natural beauty and peace of mind has served as timeless inspiration for famous contemporary and past painters alike, such as Clarence Gagnon.

Charlevoix is home to two stunning national parks that each offer an array of experiences for nature lovers. Hautes Gorges De La Rivière Malbaie National Park is a thrill-seeker’s paradise: climbers come to scale the highest rock faces in eastern Canada, and the kayakers love the rapids of the Rivière Malbaie. The park also offers more sedate activities, such as riverboat cruising and gloriously pretty hikes that are all the more beautiful as the leaves change, setting the forests ablaze in a wash of reds and golds. In the winter, the heart of the park opens up and hosts the Vallée des Glaces—a must-see during the holiday months. The awe-inspiring valley forged by glaciation offers snowshoe trails here with a chance to bask in panoramic splendour atop swathing mountains, all the while enjoying heated shelters as rest stops in between views.

The alpine terrain of Grands-Jardins National Park is perfect for those who want to get back to nature: hiking—with an essential trip through the Mont du-Lac-des-Cygnes, offering an unobstructed view of the meteoric crater that landed 400 million years ago—fishing in its pristine waterways, and observing the plethora of wildlife that roam the park—black bears, moose, lynx, caribou, and grey wolves to name among many more. The park also offers a range of led activities that include a via ferrata circuit and interpretive activities such as tours in a traditional First Nations birch bark canoe. 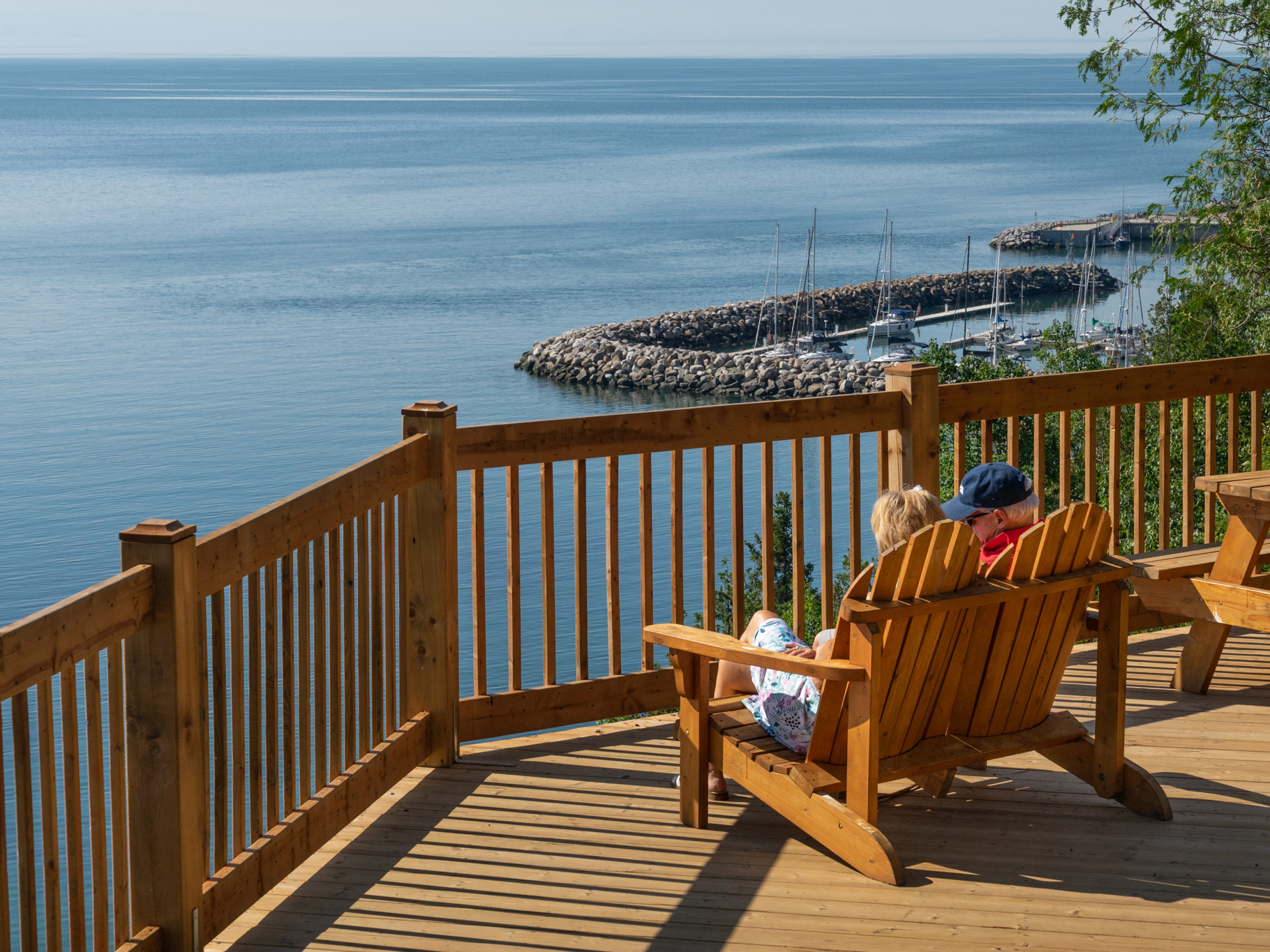 Whatever your preferences on a trip, there are accommodations to match in Charlevoix. The classic Fairmont Le Manoir Richelieu in La Malbaie—also known as the Castle on the Hill—provides luxurious amenities, golf, a plush spa, and excellent dining options. Inns, tourist homes and chalets are everywhere, offering personal touches and opportunities to interact with those who call this spectacular region home and hailing to over 200 years of touristic tradition that has openly welcomed guests with open arms. This tradition is especially true in La Malbaie, where gorgeous chalets encapsulate the epitome of luxury, comfort and Charlevoix’s hospitality while basking in its many beautiful views.

Whatever makes you the happiest, whether that be serene and relaxing drives between beautiful places to eat and savour the view, or adventuring in nature, Charlevoix draws you in and always delivers more than it promises.