It’s 2017, and while there’s still no sign of flying cars or robot butlers, at least we have virtual reality. With price points still in the clouds, though, not everyone has the privilege of warping themselves into space or watching the Raptors get slugged by the Cavs in VR. House of VR, a new virtual reality lounge on Queen West, hopes to break down the barrier between real people and virtual reality. “Virtual reality is the wild west right now,” says co-founder Jonah Brotman. Many platforms—including the Oculus Rift, PlayStation VR and more—are competing for the market. “We want this to be the central place where people can come and try it out.” Across the two-floor space, groups can rent booths for hourly sessions. They’re equipped with a system called the HTC Vive, which has motion wands and lets users movement around a square space. Booths on the first floor are outfitted with green screens, so that friends without headsets on their noggins can see their VR explorer superimposed into a virtual world. The walls of each booth can fold in to accommodate larger events. House of VR doesn’t plan to focus on games—most VR games are too solitary for a group setting. They’ll instead launch with 20 programs, including sports simulators, a walk-the-gangplank experience and a journey into van Gogh paintings. They’ll also have Masterpiece and Google’s Tilt Brush, which allow users to create art in three dimensions with the waves of their hands. Guests can also rent the mostly hands-free Samsung Gear, which is used mainly for VR videos rather than gaming, and hang out in one of the pod chairs. The Gear is less sophisticated than the Vive, and can be a good fit for VR neophytes. House of VR plans on holding Meditation Mondays, therapeutic sessions to start the weekly grind, teleporting users to an oceanside beach. “It transports you to a different world,” says co-founder Stephanie Payne. “It’s a little bit of escapism.” While the VR devices can technically teleport you anywhere, the real-world space looks like a bleached-out Tron. The wide front windows are tricked out with fading green and purple gels to give the front lounge a hologram hue. Around the space are Nanoleaf pads, triangular colour-changing lights like the ones shown here arranged in the shape of a heart. Brotman anticipates House of VR will host brand launches, team-building outings and birthday parties. The space is outfitted with fittingly futuristic art, like this mural by co-founder Payne that riffs on The Creation of Adam. Brotman describes himself as a futurist. “To me, virtual reality in its current iteration forecasts the future,” he says. “When we’re all old and our bodies aren’t working much, I’m pretty sure we’ll be able to plug in and go for virtual bike rides together.” And here’s a peek inside one of the bathrooms, which Brotman was eager to show off. With black lighting and brick walls, it’s like a space sewer. 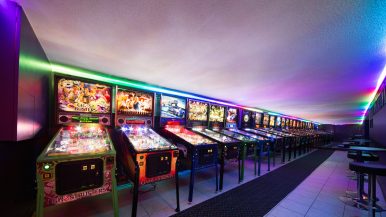 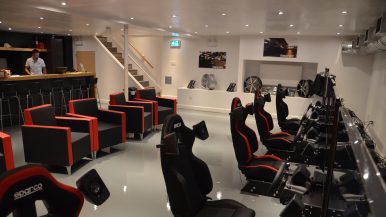 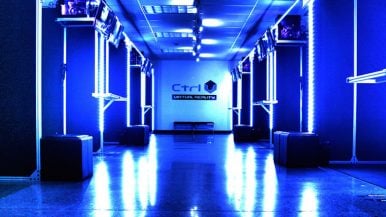 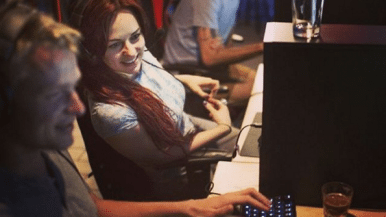