“I got a FedEx delivery of all the awards to my house”: This Toronto event producer presented Emmys to the Schitt’s Creek cast in a hazmat tuxedo

“I got a FedEx delivery of all the awards to my house”: This Toronto event producer presented Emmys to the Schitt’s Creek cast in a hazmat tuxedo 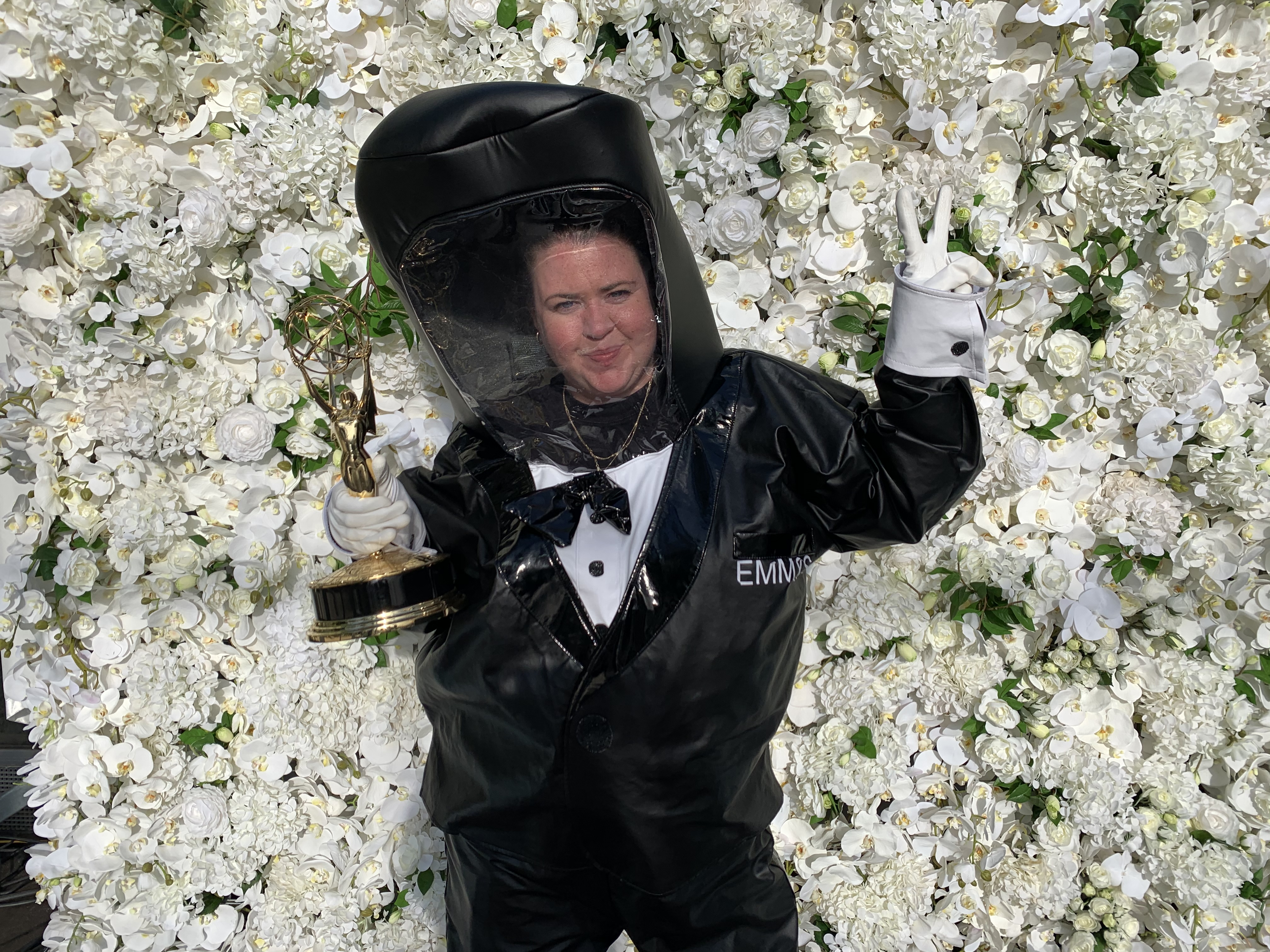 Last night’s Emmy broadcast featured big names from Aniston to Zendaya, but the true breakout stars were the Emmy presenters who kept things Covid-safe and black-tie appropriate in giant tuxedo hazmat suits. Kathleen Ryan is the Toronto-based event producer who suited up to deliver trophy (after trophy!) to the cast of Schitt’s Creek. Here she shares the night’s most memorable moments, how she ensured the event was Covid-compliant and why she now has the world’s best Halloween costume.

People are calling the Emmy hazmat tuxedos the fashion statement of the year. Congratulations on being best dressed.
Ha! Thanks. I didn’t know that the suit was going to be as fabulous as it was until it arrived at my house last week. I never saw a rendering or anything, and then, as I was pulling it out of the box, I was dying because I wasn’t allowed to tell anyone. It was a very 2020 look—forward thinking, functional chic. And great to turn something that could have been gloomy into something fun and kitschy.

What was it like to be in one?
It was very, very, very hot. Dan Levy actually pointed out that I had created makeshift windshield wipers by rubbing the top and bottom parts of the face covering against each other. It was hard because we—I, my camera man and floor producer—had been careful to choreograph everything precisely. And then I ended up with no peripheral vision and wearing these giant bubble shoes over my actual shoes. There were wires all over the floor. I didn’t trip, but I came close.

Did you have to get sized in advance?
We were given the option of three sizes. I went for the medium, and it was definitely roomy. It wasn’t uncomfortable; it was just so hot. I was wearing leggings and long sleeves underneath, when I should have been in a tank top and biker shorts.

How did you land this unusual gig?
I run my event company, Kathleen Ryan Productions, in Toronto. I’ve done work with Done+Dusted, the company that produced the Emmys, and they contacted me about handling the Schitt’s Creek part of the event. It was like planning a mini awards show. We brought in lighting and camera equipment, and the Schitt’s Creek people chose Casa Loma. I’m not sure if you could tell on TV, but we were outside: it was a tent with no sides, and the tables were all socially distanced. It was such an exciting night—kind of like a Canadian Heritage Moment in real time. I was so happy for the cast and for Canada and for myself and my team. It has been a struggle. We lost 13 contracts on March 14, and the losses just kept coming. So it was amazing just to be able to work.

What other precautions did you take?
We all took a Covid test the day before and then had to isolate until the broadcast. We did temperature checks as people arrived, and we had a Covid compliance officer on our crew, which is a new part of the industry. We had to make a few adjustments to group size when the provincial government put out new restrictions. Luckily the invites hadn’t gone out yet.

How did the award distribution work? Ramy Youssef, who was up against Eugene Levy for Best Actor in a Comedy, tweeted a video of a tuxedo hazmat person at his house with a trophy, even thought he didn’t win.
I saw that. For the main categories, they sent hazmat presenters, even if the person or the show didn’t win. Last week, I got a FedEx delivery of all the trophies to my house. And then I was lucky because I didn’t have to send a single Emmy back.

Did you have any sense that it was going to be such a big night for Schitt’s Creek?
I definitely had a good feeling. But no, the academy didn’t give any clues in advance. When the categories were announced, I would be waiting off to the side and ready to go. People at the tables might have thought I knew in advance. I saw people watching me for signs: like, if I didn’t look ready, that would mean they weren’t going to win. In reality, I found out at the same time as everyone else. Well actually, I found out about four seconds earlier because my earphones were synced up with L.A. and everyone else was on a delay.

Any behind-the-scenes moments you can share?
One sweet thing I saw was when Sarah Levy—Eugene’s daughter and Dan’s sister, who played Twyla on the show—called in on FaceTime. She’s shooting in Newfoundland, so she couldn’t be there to celebrate with her family. They did a bunch of family shots and had her face on a screen. Everyone was really happy and excited, obviously. Myself included. I’m such a big Schitt’s Creek fan. I love to see Canada getting attention and also for people to realize that monster-budget shows aren’t the only ones that can succeed.

You were on TV last night more than anyone other than Jimmy Kimmel! How are you adjusting to your new celeb status?
I wasn’t able to pay attention to my phone because everything was so busy, but when I finally finished up, just before 1 a.m., I had something like 100 texts. People were like, is this you? Yes, it was me. Tyrone Edwards put a shot of me on his Instagram, so that was fun. I did see some people on Twitter turning on us. But I just laughed.

I guess you’ll have a pretty great Halloween costume if people are able to go out this year.
Well, I’ll definitely be able to go out. I might be the only one. This is the safest costume ever.