When Covid shut down the city, comedian Ben Bankas rented equipment, gathered his professional-comic friends and started a weekly stand-up comedy show at a park in Toronto. Here’s how it came together.

“I started doing comedy in 2011. For the first four years, I worked as an amateur, doing three or four sets a night to sharpen my skills while working for a junk removal company during the day. Then I got into sales. I sold photocopiers, then I got my real estate licence and started doing commercial office leasing. In April 2019, I got signed by Yuk Yuk’s, and I’ve been working my butt off ever since. I was doing seven to 12 shows a week, everything from open mics to Yuk Yuk’s shows. I also hosted my own comedy night at Old School on Dundas. In November 2019, I quit commercial real estate to do comedy full time. I moved home with my mom to save money. Everything was going well. And then, of course, the coronavirus hit.

“At first, I didn’t think it was going to last that long. I thought, Maybe we’ll miss a month or two of shows. At the same time, my income dried up so I started working for Dial A Bottle to earn some cash. I was doing a few comedy shows through Zoom and Instagram Live. But they were kind of lame. In my opinion, there’s no comedy without the audience.

“By the middle of May, I was itching to perform in front of a live audience. I had some money saved from working with Dial A Bottle, so I thought I could rent some equipment, get some comics together and start a little show in a park.

“We decided to do it at Christie Pits. I’ve seen other events there, before Covid, where they put up a big screen and showed movies on the hill near Christie and Bloor. And I wanted to go somewhere where there was a built-in audience—where there would already be people sitting there, hanging out. I went to Long and McQuade and rented a speaker, a light, a microphone and a mic stand for $400 a month. I called up some of my friends and put together a lineup of six comedians. We had some great local comics on board, like Nitish Sakhuja, Chris Robinson and our headliner, Jason Rouse. I also hired a security guy, because I was worried that people might get mad that we were doing comedy in the park.

“The first show was set for Friday June 5. When I got to the park, there were tons of people already drinking on the hill. We started setting things up and I announced that we were doing a comedy show. People were super, super excited because nobody had done anything like that in months. I was nervous to get up in front of an audience and do comedy for the first time in a while. But everything went perfectly. Toward the end, I was on edge because I thought we might get in trouble. But once it was over, I was relieved. After the show, audience members came up and donated five bucks, 10 bucks, 20 bucks. After paying the comics, the security guy and equipment rental, I had barely broken even. Everybody was telling me, “You gotta keep doing this.” So I did. 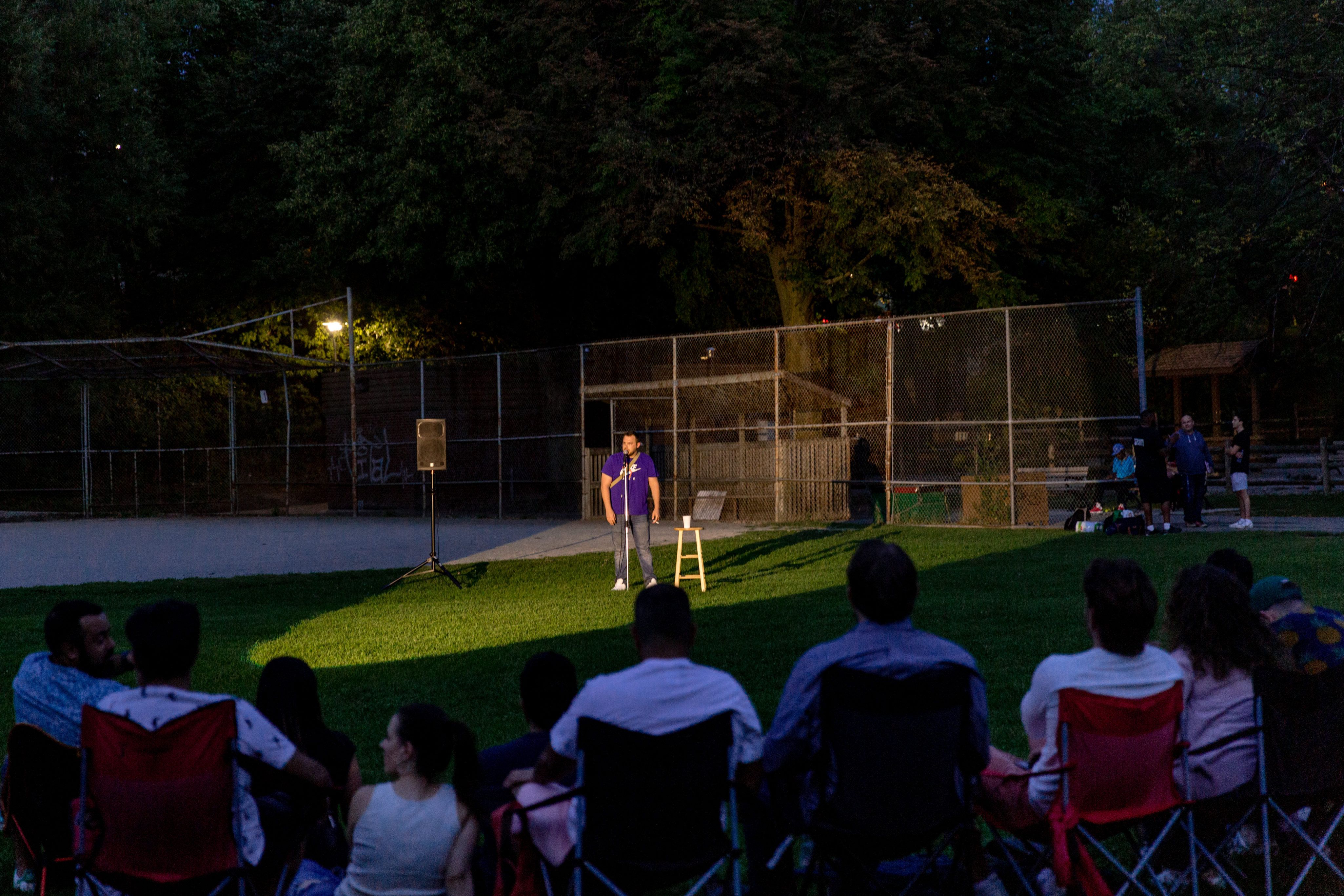 “I got another lineup together for the following Friday. But this time, right when we started the show, two bylaw officers wearing yellow vests walked over. We were still in Stage 1 at the time, so meeting in groups of over five people was prohibited. They said I couldn’t have a gathering, and I couldn’t have a speaker. They threatened to call for backup. So I went on stage and told the audience that the bylaw officers wanted to shut down our show. Everyone booed. I said, “These guys want to shut down comedy. They don’t want us to laugh. And they said they’re gonna call the cops if we don’t stop. So I guess they’re gonna have to call the cops!” Everybody cheered, and I put the first comedian on.

“The bylaw officers were still standing off to the side. When I went offstage, they told me I was disobeying an order and that they were calling for more officers. Half an hour later, one cop car came down the driveway next to the hill where we were performing. Then a second cop car. Then a third. Then a fourth. We kept the show going. None of the comics flaked, and no one in the audience left. I thought the cops were going to start sifting through the audience or kicking people out, but they didn’t. Half an hour later, the bylaw officers gave me a bunch of tickets and fines, totalling $2,135. I’m planning to fight the tickets once the courts open back up. I have a friend who’s a criminal lawyer and a big comedy fan, so I’ll have his help.

“At the end of that second show, I collected double the amount of donations from the audience. Later that night, I started a GoFundMe and started blasting it out on Twitter. We had some notable comics retweet it, like my friend Aaron Berg in New York City, Russell Peters and Doug Stanhope. In one day, we hit our goal. From the proceeds, I also made a donation to the family of Regis Korchinski-Paquet.

“I wanted to keep the show going. I’d seen protests during the pandemic with large gatherings and speakers, so I thought, Let’s do it as a protest. I decided to call it the “Freedom of Comedy Protest.” We’ll continue the show every Friday until live comedy shows are permitted in Ontario and people are allowed to laugh at uncensored, unfiltered stand-up comedy. We also moved to a secret location. If people want to attend, they can email me or DM me on Instagram and I’ll send out the location two hours before the show. It’s a good way to get to know the fans and gain some followers, too. When I send out the location, I remind everyone to keep their distance. Most people in the audience are doing it anyway. We usually have a couple hundred people attending each show. After doing comedy in the city for almost a decade, I have a big network of pro comics in the city, and I’ve had no problem booking people for the shows. Comics are now emailing me regularly asking how they can be a part of it. 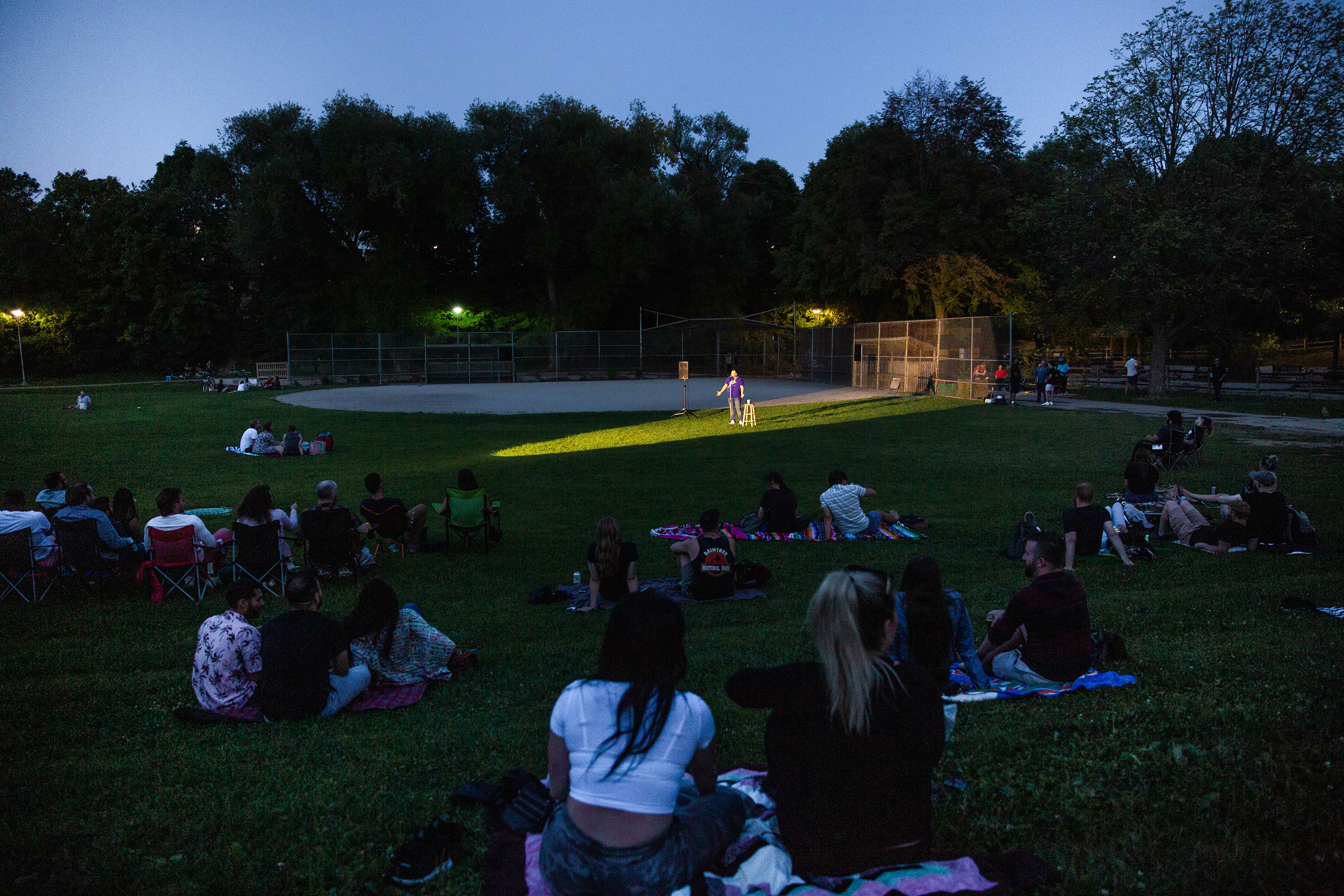 “Since we made the location a secret, the shows have been going well. The comics are coming up to me, some of them with tears in their eyes, telling me how amazing it is to do comedy for the first time in months. Audience members tell me how much they loved the show and that I have to keep doing it. The community has been really supportive, too. They set up their patio chairs at the top of the hill and bring their booze and their dogs and watch the show. They tell me that it feels like a neighbourhood activity.

“I don’t plan on stopping until it gets cold out. Yuk Yuk’s isn’t opening until September 12 in Toronto, so we’ll at least be going until then, if not longer. We may have to change locations if larger crowds show up so that we can accommodate everyone.”