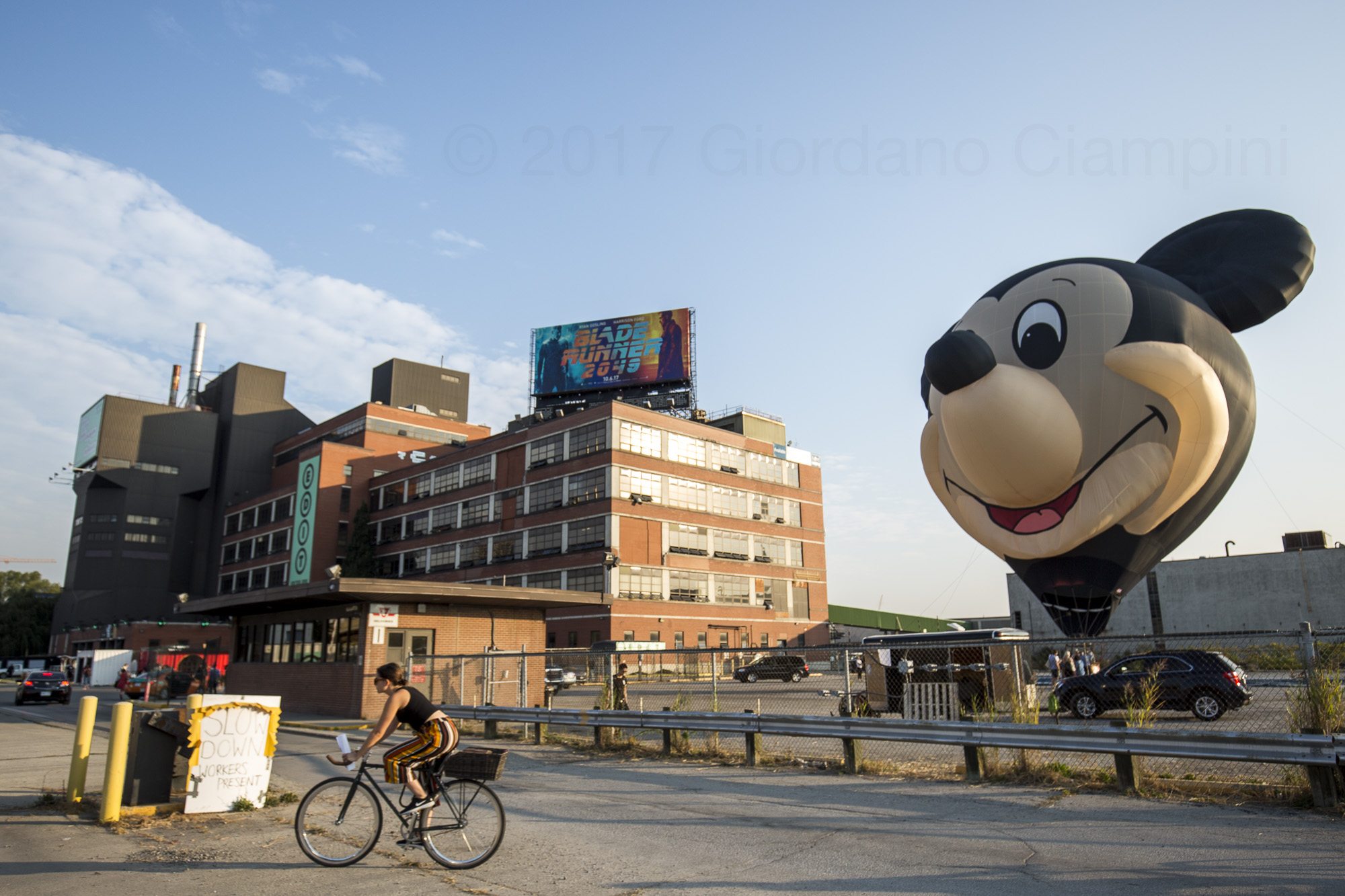 EDIT, the Expo for Design, Innovation and Technology, runs until October 8 and bills itself as the festival of the future: its 50 exhibits and installations all envision what the world might look like after 2017. Its venue, on the other hand, is a thing of the past—a derelict Unilever soap factory at Lakeshore and the DVP that served as a set for Suicide Squad and could be rented out for $10,000 a day. The fest is a partnership between Toronto’s Design Exchange and the United Nations Development Programme, and, when it’s over, developer First Gulf will raze the factory and build a massive commercial, office and transit hub called East Harbour. Here, a look at what’s inside the factory. 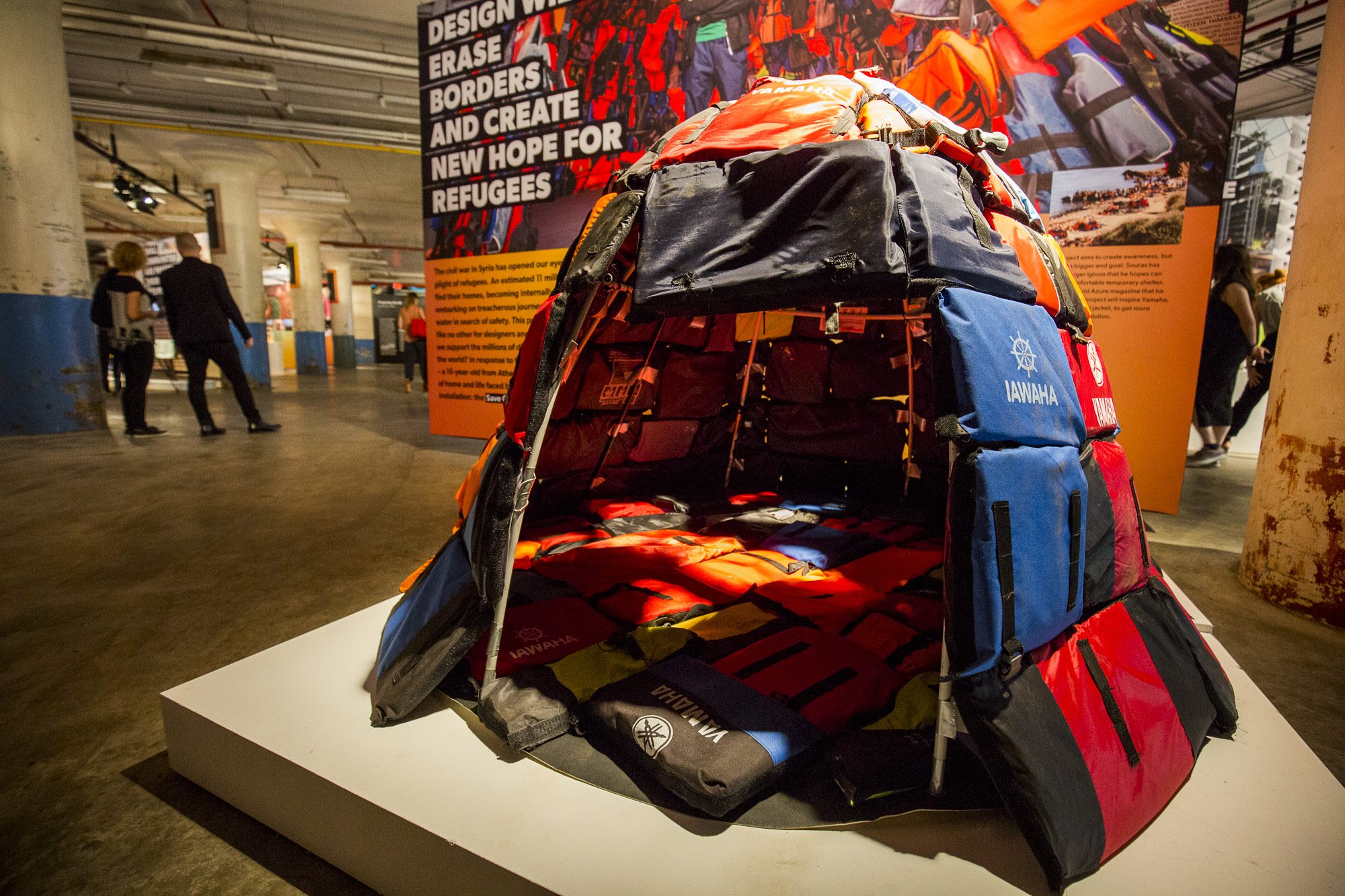 Save Our Souls Shelter by Achilleas Souras
When 17-year-old Greek-English artist Achilleas Souras was at architecture summer camp at Columbia University last year, his school brought in life jackets discarded by refugees on the shores of the Greek island of Lesbos for a class project. He got the idea to use them as building materials for a shelter that would increase awareness of the current global refugee crisis. He emailed the mayor of Lesbos, requesting some more used jackets, and built this igloo from 35 of them. 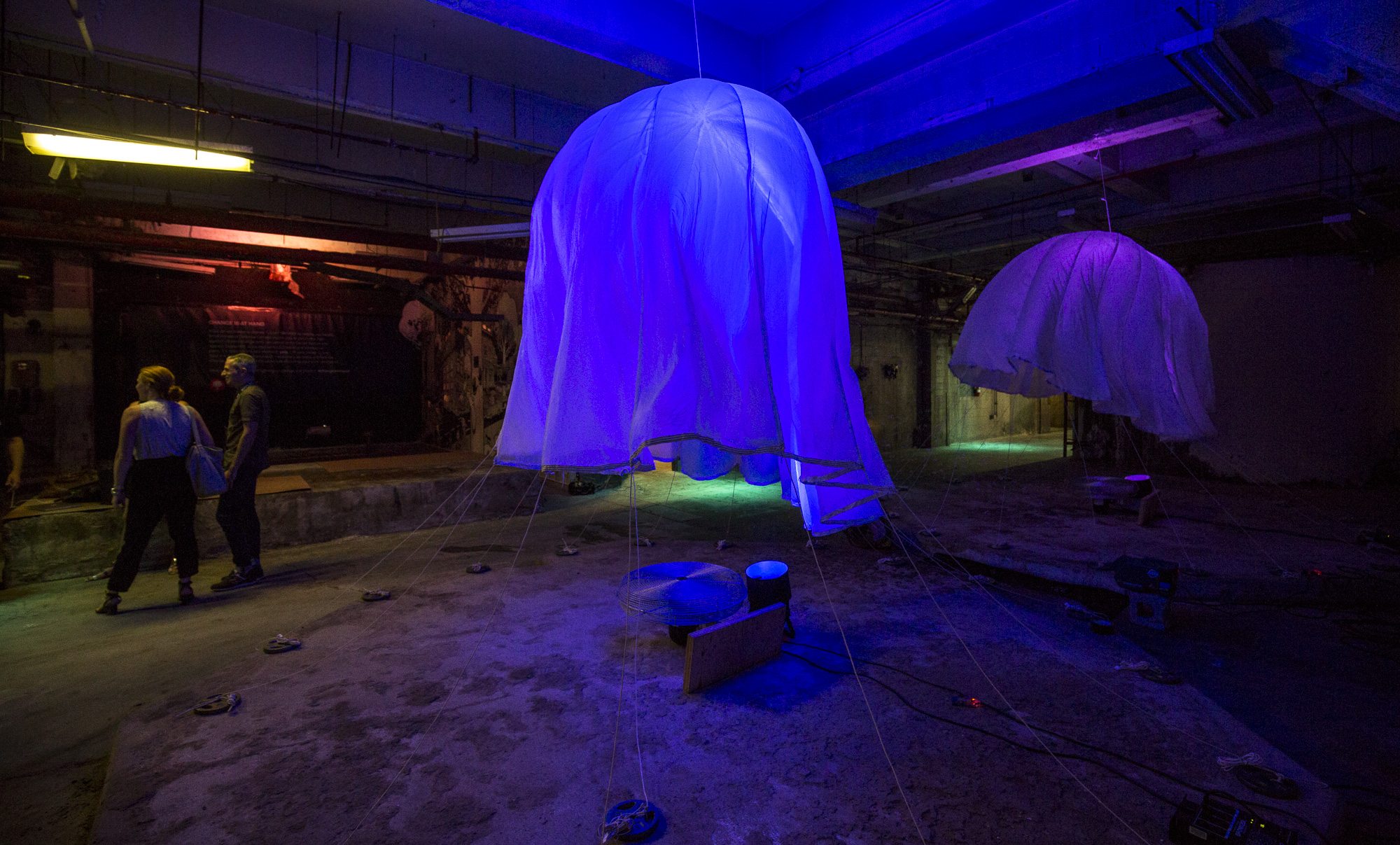 Hot Process Dispersion by LeuWebb Projects
Christine Leu and Alan Webb, the architects behind LeuWebb Projects, were inspired by the space’s past as a soap factory. They created this spooky art installation as a symbol of the decline of manufacturing. The fabric, held down by weights, undulates with the breeze blown by a fan on the ground. 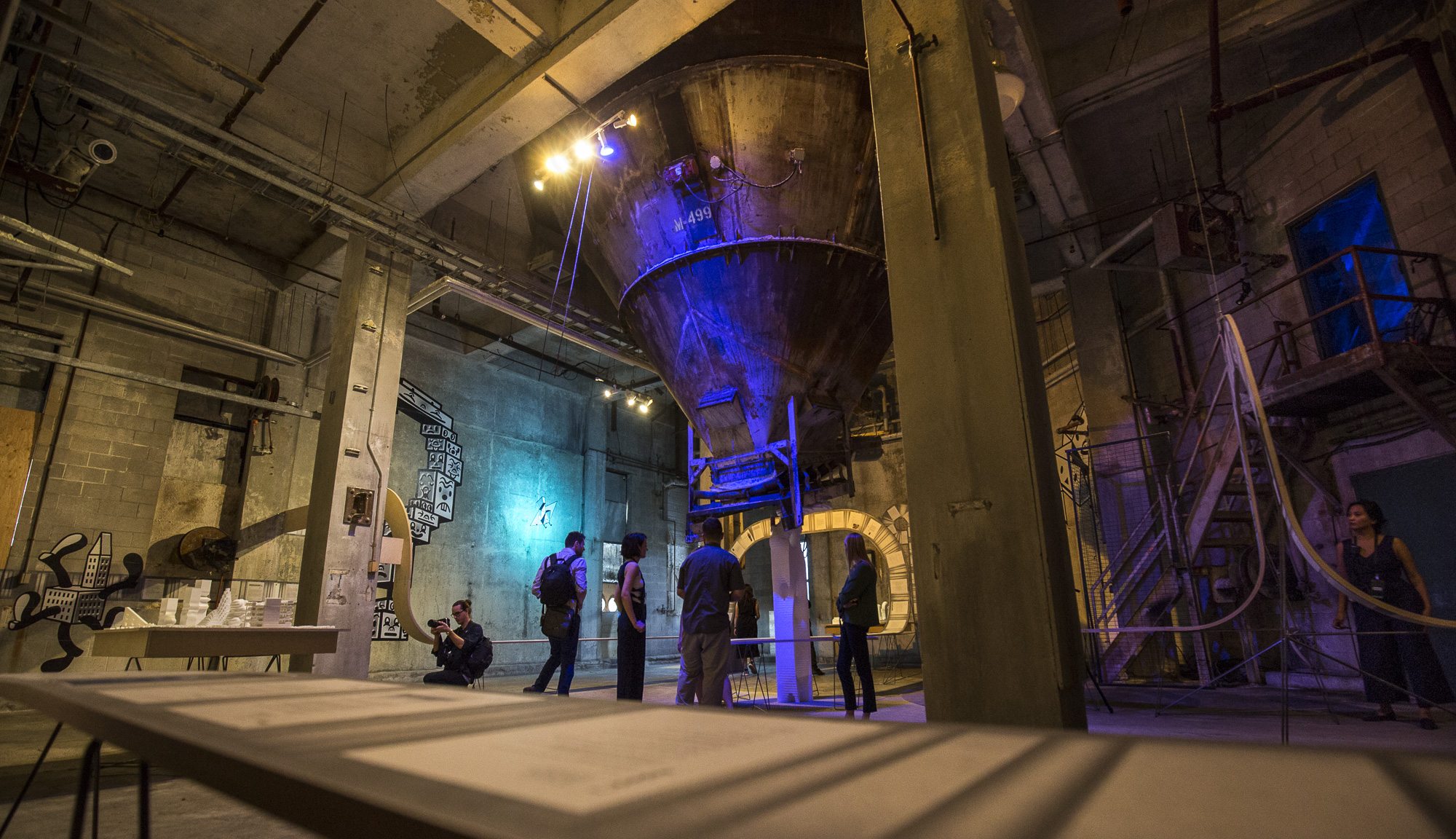 One hundred ways to improve Toronto

Letters to the Mayor and Letters to the Developer by Partisans and Storefront for Art and Architecture
For this installation, 100 architects wrote letters to Mayor John Tory and local developers, either suggesting ways to improve Toronto or congratulating them on successful projects. Here, their letters are laid out on a curving platform that resembles an assembly line, going from an architect’s table to a mayoral desk. 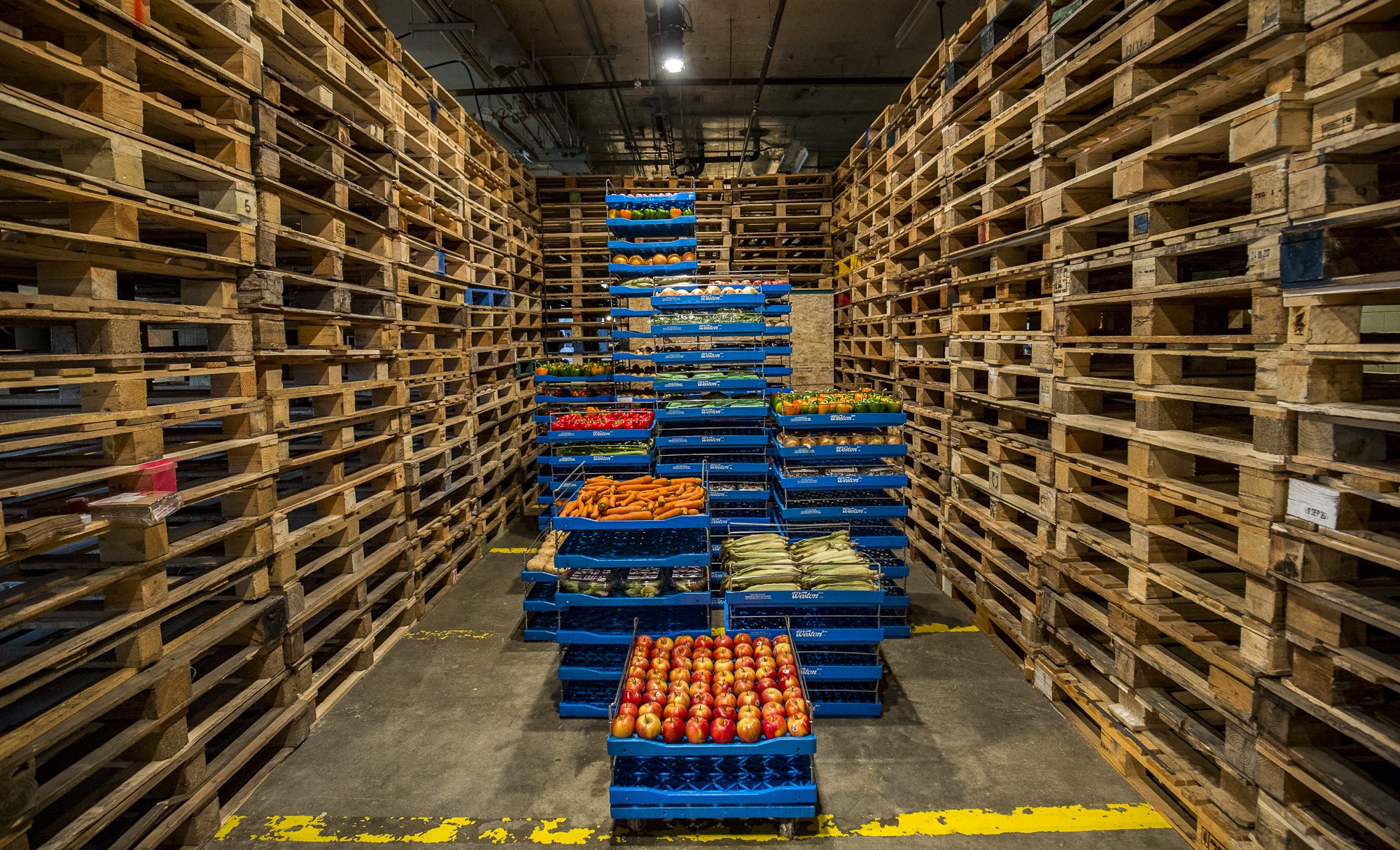 A small slice of food waste

Decorative Fruit by Robert Cram, Second Harvest and Gladstone Hotel
Landscape architect Robert Cram’s installation is meant to draw attention to the 30 per cent of fruits and vegetables that supermarkets in North America reject because they don’t meet cosmetic standards. The piece contains just a quarter of the food that Second Harvest saves from supermarkets in a single day. 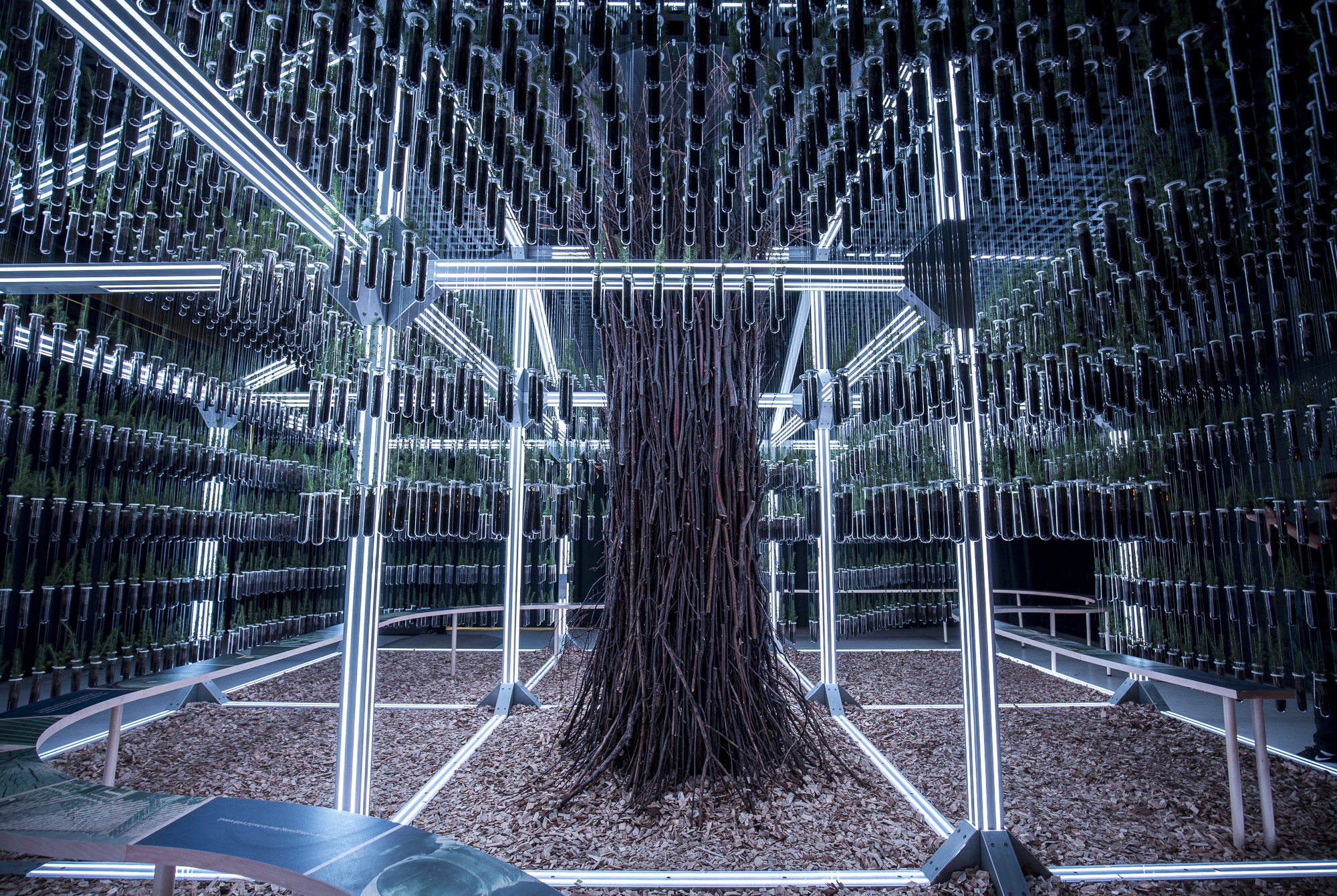 A tree of test tubes

The future is ancient/the future is wood by Great Gulf
Developer Great Gulf’s installation suspends 5,000 test tubes from the ceiling. Each one contains a seedling—the exhibit is meant to highlight the sustainability and renewability of wood as a building material. 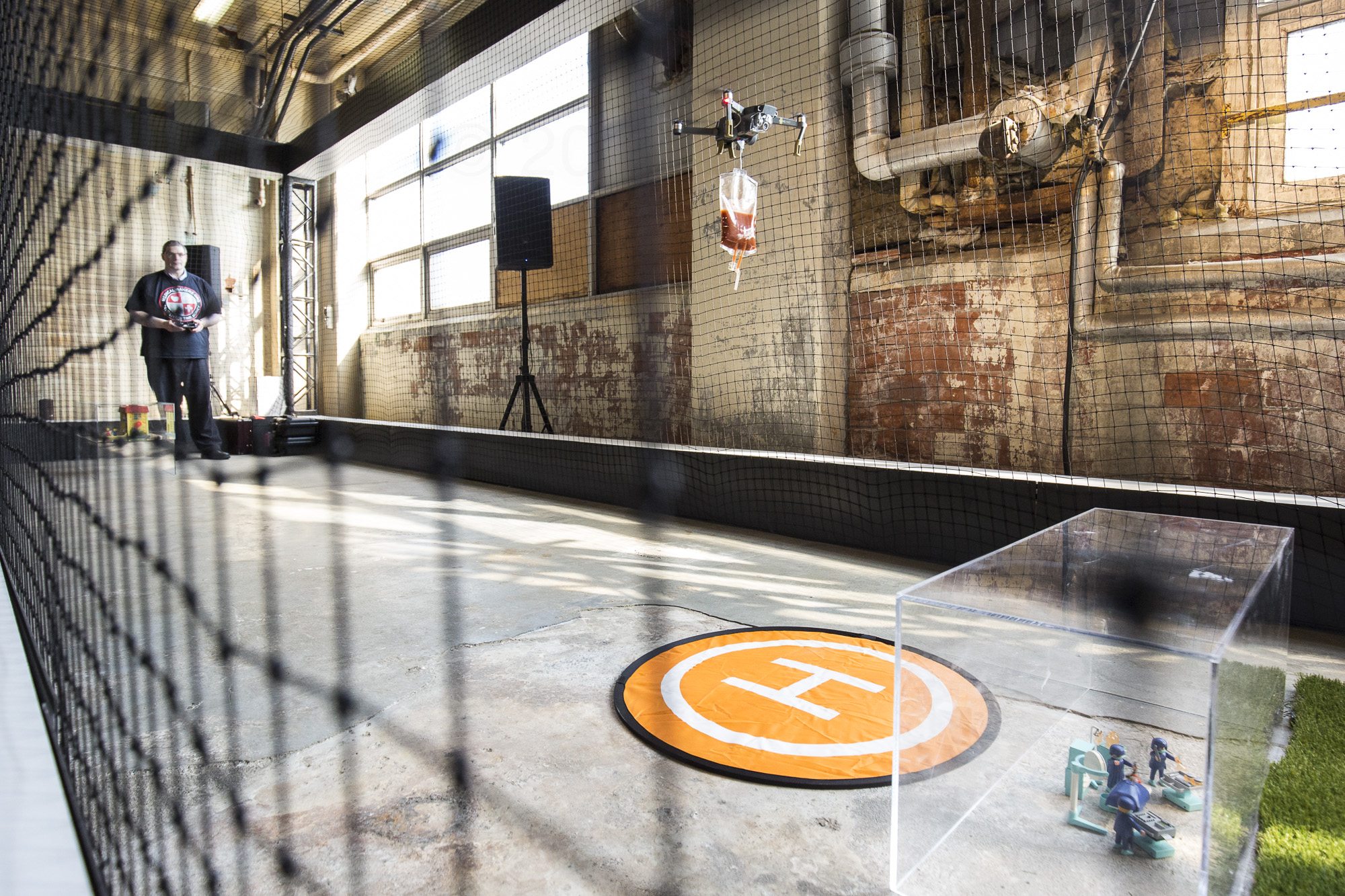 Drone Zone curated by Julielynn Wong
Apart from a space to try piloting a drone, this exhibit highlights Global Medic’s RescUAV drones, which deliver medical supplies and blood to patients in remote communities in places like Rwanda. 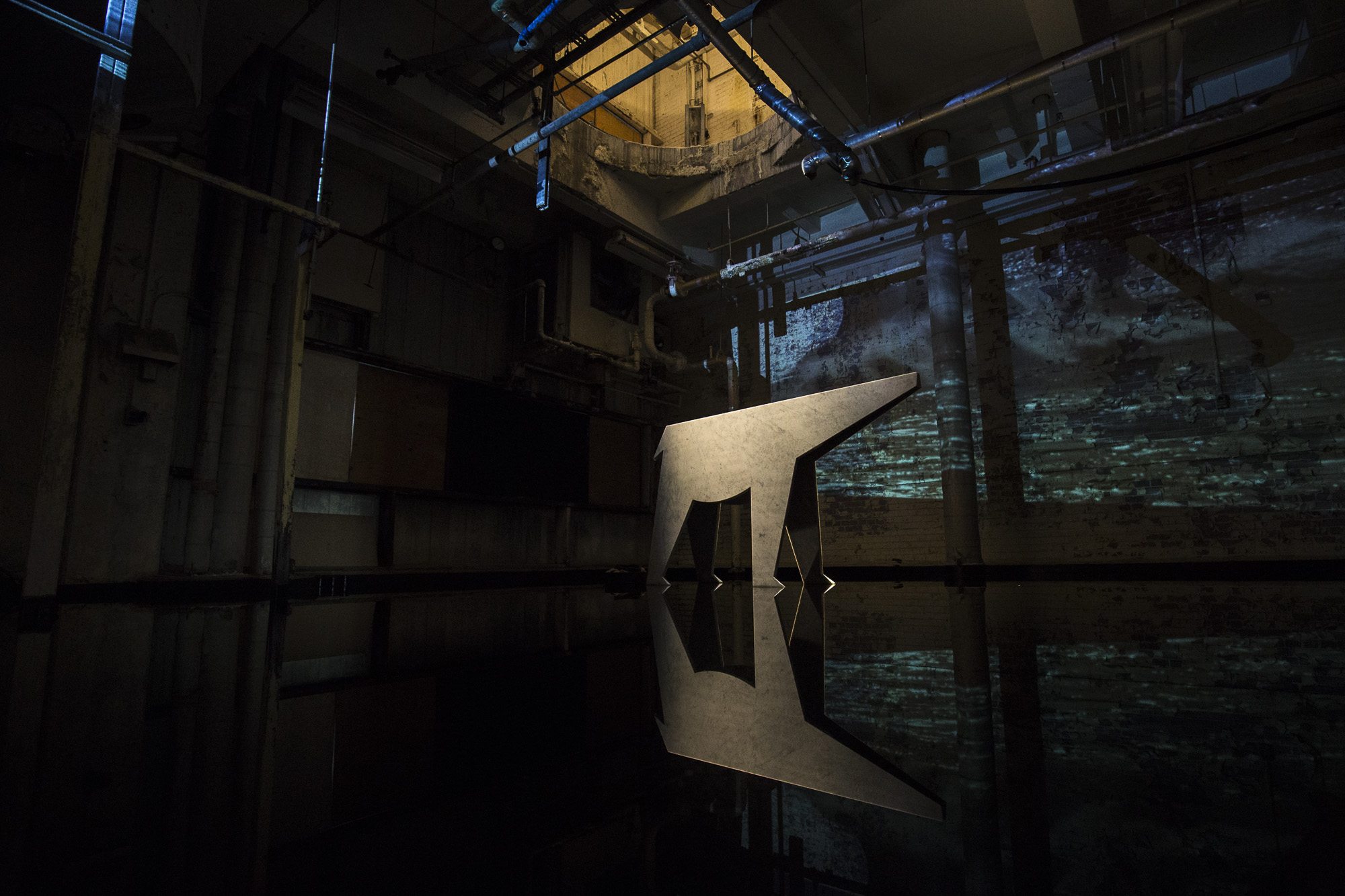 An oil-slick commentary on climate change

We are the Bear by Stefano Pujatti (Elastico SPA), Kregg Fordyce (KFA Architects) and Chris Kubbinga (Thomas Brown Architects)
This origami-like bear is made of carrara marble and stands in a pool of oil. It’s a metaphor for how climate change affects our environment and wildlife. 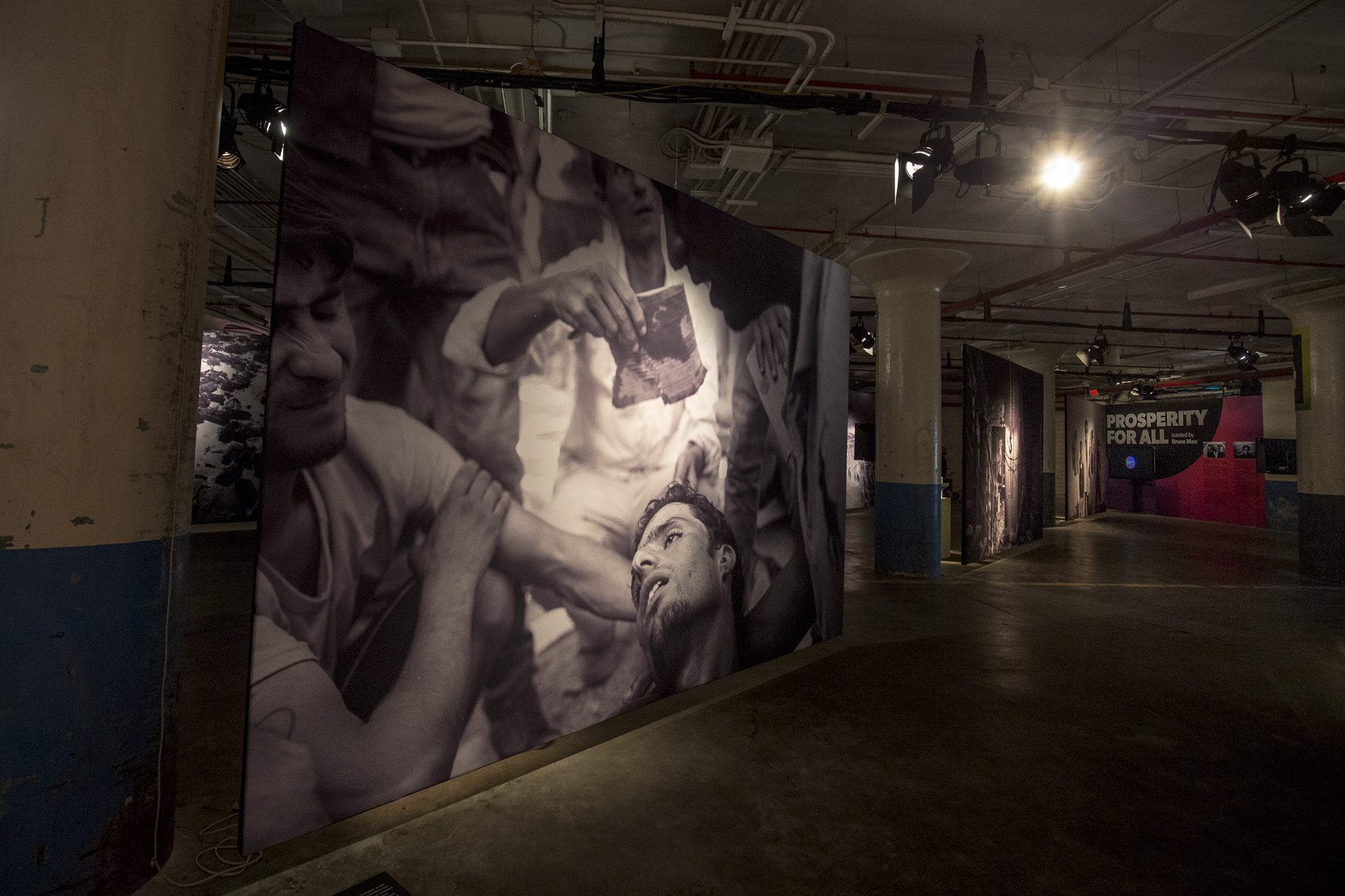 Prosperity for All curated by Bruce Mau
EDIT’s main-floor exhibit features a photo essay by Magnum photojournalist Paolo Pellegrin, whose black-and-white photos document global conflicts from around the world. Curator Bruce Mau juxtaposed Pellegrin’s bleak images with inventions that are helping the world meet the UNDP’s 17 Sustainable Development Goals, like a “smog vacuum” in China. 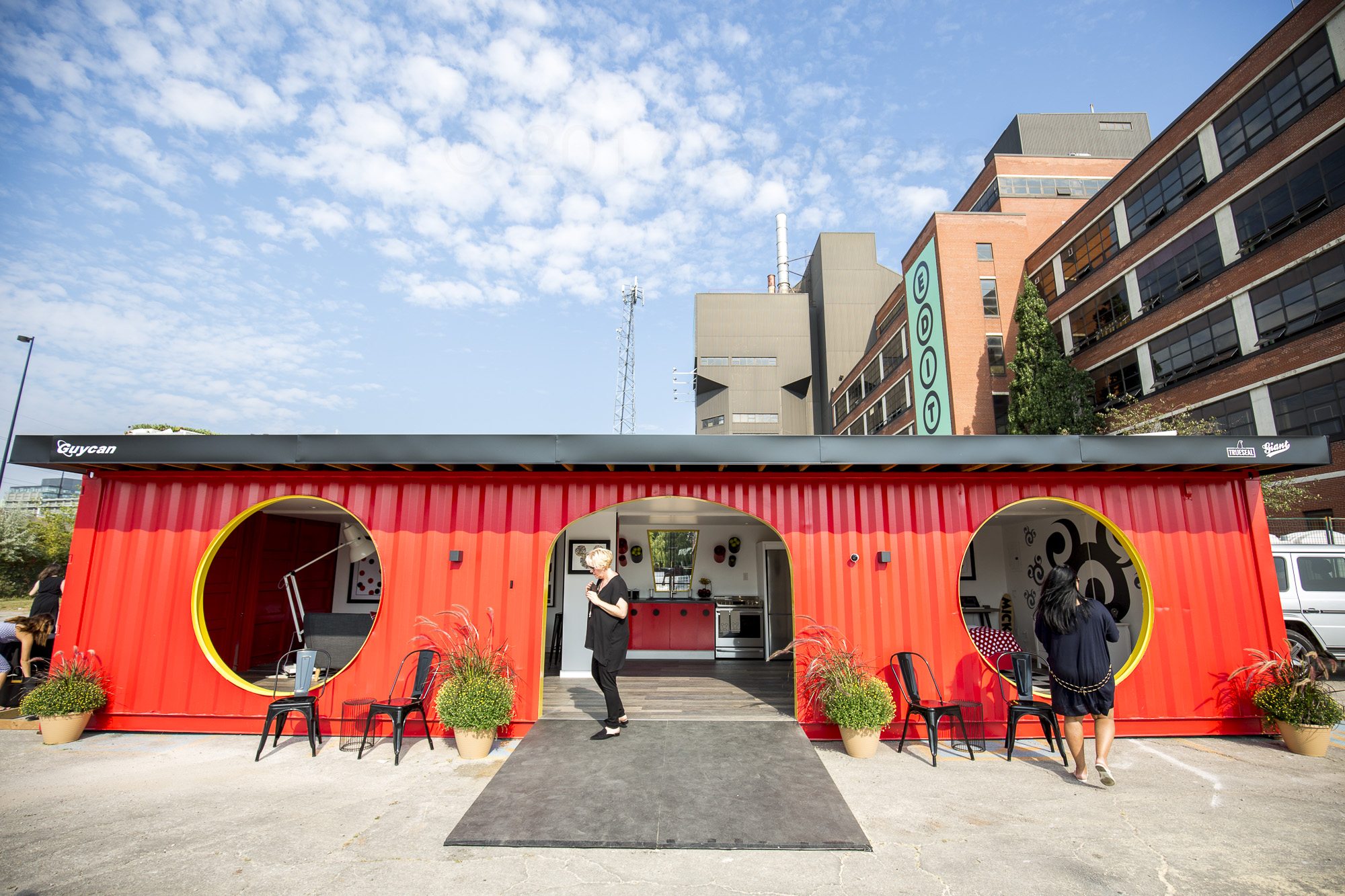 Mickey Mouse’s Home of the Future by Aira Harutyunyan, Rachel McCormick and Sebastian Ayala
This bachelor pad, just outside of the factory, is the result of an OCAD U competition that challenged students to design a future home for Mickey Mouse. Inspired by Steamboat Willie, the first cartoon that Mickey appeared in, which turns 90 next year, the winners worked with Giant Containers to fashion this sustainable, eco-friendly home from two shipping containers.