Drake’s latest opus, a 22-track “playlist” titled More Life, doesn’t overtly feature Toronto in the way 2016’s Views did, what with its meme-ready CN Tower perch and endless hyperlocal Easter eggs. But that doesn’t mean shout-outs to the 6 are scarce. Here, we break down of the various T Dot–specific people, places and things that Drizzy references on his new project.

“If Gilla call shots, no questions / G-Way till I’m resting / But we still got love for the West End”

An abbreviation of Galloway, G-Way refers to Scarborough’s Kingston-Galloway neighbourhood, an area known for its crime and gang affiliations. Drake’s OVO affiliate Gilla shot his “Wrapped Up” video in G-Way. Despite expressing his devotion to the East End ’hood, Drake makes sure to shout out western Toronto as well.

“I’m building up a house where they raised me / You move with me, I’ll go crazy”

Drake lives in a Calabasas mansion he purchased for $7.7 million in 2012 (and is neighbours with More Life collaborator Kanye West and Kim Kardashian), but, a couple years ago, he bought a $6.7-million Bridle Path spot and has the green light to construct a mega mansion.

“I switch flow like I switch time zone / Can’t get Nobu, but you can get Milestone / I gotta do mansion, ’cause I outgrew condo”

Japanese chef Nobu Matsuhisa recently announced he’d be bringing his upscale restaurant-hotel franchise to Toronto, so “can’t get Nobu” (whether written before or after the news) is true of the GTA for now. Drake makes another reference to his Bridle Path mansion in the making; he sold his condo at 1 St. Thomas Street for $3.75 million in 2013.

The 6, of course, is the nickname for Toronto that Drizzy popularized. “40” is longtime producer Noah Shebib, who works out of a home studio here. His house presumably has a nice view of Lake Ontario, which Drake has apparently never seen because he’s too busy recording. “Queen Street visions that nobody believed in / Fifty-two consecutive weekends, shout out to Weeknd / The city gets stronger when everybody is speakin’, not when everybody out here beefin’”

Here’s a straightforward reference to Queen Street, where Drake held his surprise OVO pop-up shop in April 2016. Drake co-signed Abel “The Weeknd” Tesfaye as an emerging artist back in 2012, collaborated with him early in his career, and the two have dominated the pop charts since. Despite a perceived rift in their relationship, Drake asserts that the OVOXO relationship is alive and well. Proof that there’s no more beef: Drake parties with The Weeknd in Tesfaye’s recent video for “Reminder.”

Torontonians who ball on a budget should get a kick out of this line. Outlet malls, casinos and one of the seven wonders of the world await a short drive down the QEW.

“Y’all sleep at the Sheraton / All that shit embarrassing”

This is a shot at lesser rappers who stay at the Sheraton, which, for the record, is just fine—though not quite the five-star accommodations Drake has become accustomed to.

“Six months since I’ve been back in the 6 / I can’t help but wonder how you’ve been, babe”

While Drake is frequently away from his hometown, touring or posting up in sunny California, his thoughts still drift back to a lady friend in the GTA.

“Used to be at SilverCity Indigo”

Here’s a date most Torontonians over a certain age have been on: wander around an Indigo—perhaps at Yorkdale or Yonge and Eglinton—and then pop into a SilverCity to catch a flick. Of course, those SilverCitys are now Cineplex.

The “annual shit” is Drake’s long-running OVO Fest, a mega concert he hosts every August long weekend in T.O. It started at the Molson Canadian Amphitheatre before moving to the Air Canada Centre in 2016. Now, Drizzy is threatening to move the show again, to “the Dome,” i.e. the Rogers Centre, which could pack a crowd of 40,000. (During a recent European tour date, Drake also teased London that he might bring OVO Fest overseas to O2, a.k.a. the Millennium Dome, but its capacity is roughly half that of Rogers.)

New York isn’t the only city with a “Bridge” neighbourhood immortalized in rap lyrics. Club Palazzo is located in the northwest Toronto suburb of Woodbridge, an area with a high Italian population. With all due respect to Palazzo, Miami’s famous Club LIV holds a bit more social caché.

“You overnight celebrity, you one-day star / I told you I’m in this bitch for entirety / I am a reflection of all of your insecurities / Behind closed doors, a lot of 6 God worshipping / Done talk now, ’cause there’s other shit that concerning me”

Toronto singer-rapper Tory Lanez is the target of a not-so-subliminal dis on More Life’s final track. Drake and Lanez—champion of “the New Toronto”—have traded verbal jabs for the past couple years. Here, Drake paints Lanez as a flash in the pan who wishes he could be like Aubrey Graham. 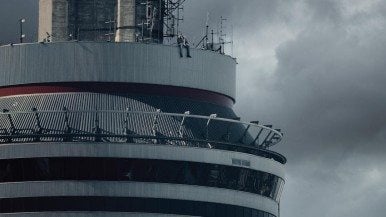 Thirty-four shout-outs to the 6, explained

An earlier version of this post incorrectly stated that the Scotiabank Theatre on John Street used to be a SilverCity.