Featuring compelling and ground-breaking work by Canadian and international photographers, and by emerging image-makers with something new to show us, the annual Scotiabank CONTACT Photography Festival is bursting with new ways of seeing and experiencing the world. Now in its 22nd year, the festival is the largest of its kind on the planet, displaying the work of more than 1,500 artists at venues ranging from subway stations and cafés to every major art institution in the Greater Toronto Area. Artists and curators have worked tireless and passionately to create inspiring, relevant and memorable experiences for artists, art lovers and members of the community.

With more than 175 venues to visit over the festival’s one-month run from May 1 to May 31, there’s certainly a lot to see. Here are three essential exhibitions at this year’s Scotiabank CONTACT Photography Festival.

Going through 30 years of work to put together her careering-spanning Scotiabank CONTACT Photography Festival solo exhibition, multimedia artist Shelley Niro was flooded with memories. “You have all the feelings you had when you made the work in the first place,” says Niro, a member of Six Nations Reserve, Bay of Quinte Mohawk, Turtle Clan. Looking at a print of one of her earliest and best-known photos, “Mohawks in Beehives” from 1991, transported her back to the 1990 Oka Crisis, an event where she felt the media portrayal of Indigenous protesters was particularly negative. “I thought there must be a way of changing that perception.” In the following years, Niro has demonstrated her power to do just that, creating complex, multilayered artworks that are personal and political, witty and deeply humane. Choosing to exhibit artworks ranging from her most famous works to family archives and never-before-seen images, Niro and the Ryerson Image Centre’s exhibitions curator Gaëlle Morel have brought together a powerful exhibition that upends traditional representations of Indigenous peoples, and challenges conventional ideas of gender, identity, culture and history. Niro’s sly sense of humour pervades most of it. “That’s pretty natural. It’s just part of my voice,” she says.

The exhibition and an accompanying book of her work, which will be distributed worldwide, are part of Niro’s prize for winning the 2017 Scotiabank Photography Award. “It’s great to be in a position where you keep working, carrying on, but you are recognized,” says Niro. “It actually feels weird, like I’ve gone through a warp. I still don’t believe it.”

The inaugural New Generation Photography Award for Canadian lens-based artists aged 30 and under, presented by Scotiabank in partnership with the Canadian Photography Institute of the National Gallery of Canada, will showcase the three 2018 winners in a group show during the Festival. Though each of the three artists has a unique voice, they share a passion for capturing evocative terrestrial, corporeal and emotional landscapes.

Toronto-based Elisa Julia Gilmour works with both still and moving images, and sometimes text, to create experiences that are haunting and emotional. Her “Éperdument (Madly),” a three-channel video installation and a publication of short stories, takes viewers on an dreamy exploration of a figure from Corsican mythology who hunts the souls of the living.

Meryl McMaster, born and raised in Ottawa and of Plains Cree/European decent, often uses self-portraiture and remote Canadian landscapes to explore questions of identity, representation, perception, myth, memory and the environment. Her “Edge of a Moment,” one of the most striking works in last year’s Art Gallery of Ontario exhibition, Every. Now. Then: Reframing Nationhood, depicts McMaster, costumed and masked in white paint, walking along the important ancestral site of Head-Smashed-In Buffalo Jump, Alberta.

Ottawa-based Deanna Pizzitelli uses analogue processes—printing with silver gelatin and experimenting with darkroom techniques—but her works don’t feel nostalgic; her themes of fantasy, desire, longing and loss remain eternal and universal. For her Koža series, Pizzitelli travelled around Europe, Canada and Latin America, capturing moments and energies, as much as bodies and geographies. 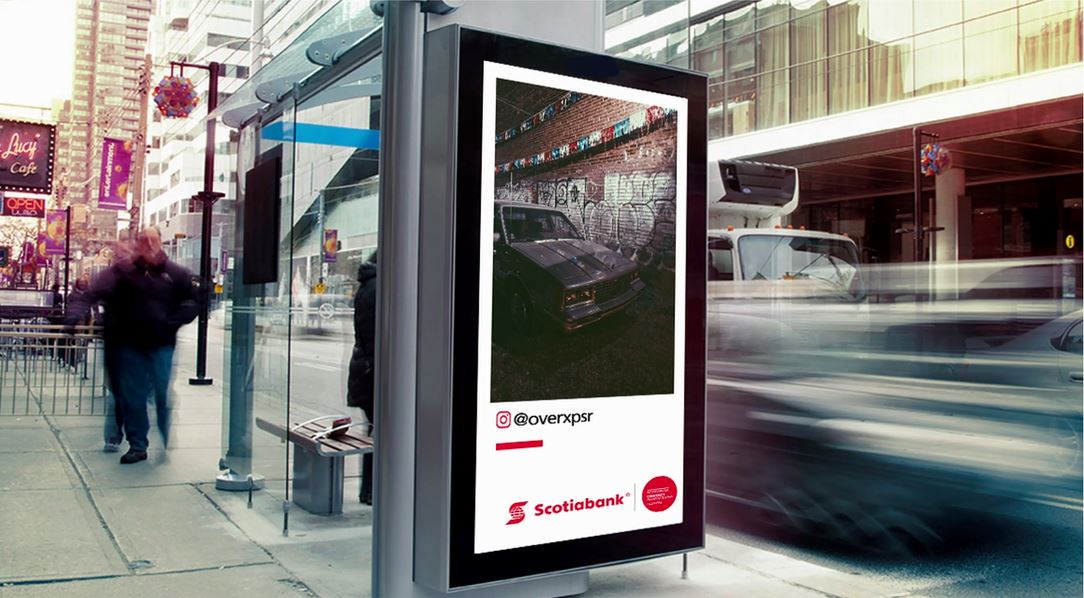 #ScotiaGallery Last year’s inaugural #ScotiaGallery featured almost 1,700 images from all across the country, ranging from photographs of landscapes, nature and architecture to intriguingly ephemeral moments. Captured by camera-wielding Canadians who tagged their shots with #ScotiaGallery on Instagram, the photographs appeared on framed screens in an innovative pop-up exhibition space in the concourse of Scotia Plaza, along downtown Toronto’s busy PATH system. The result was a dynamic exhibition of the passion and creativity of Canadians who have an eye for seeing the world in a different light.

This year Scotiabank will extend the gallery to a larger audience to celebrate the artist in everyone. Instagram images tagged with #ScotiaGallery will be displayed on out of home digital media in Toronto and on branch digital screens across the country, which will pull in an ever-changing array of images, displaying them along with the photographers’ avatars and user names. This gives photographers the opportunity to have their work seen by millions.

“We’re expanding upon last year’s Scotia Gallery concept this year to share the creative visions of all Canadians who enjoy taking and sharing photographs . We are hoping that others who share Scotiabank’s passion for the arts will tag their images on Instagram using #ScotiaGallery for the opportunity to be included as part of the digital gallery. Our hope is that the images featured will encourage us to develop new perspectives and spark important conversations. The arts are an important part of Canadian culture and our hope is that Scotia Gallery will inspire people of all ages to consider new possibilities, ” says Jacquie Ryan, Vice President of Sponsorships and Philanthropy at Scotiabank.

The Scotia Gallery runs April 30–May 27 on out of home digital media, billboards, and branch digital screens across the country. Tag your photos #ScotiaGallery to have them seen nation-wide.