Between the Pages offers up an exclusive, insightful evening with the authors shortlisted for this year’s Scotiabank Giller Prize

Between the Pages offers up an exclusive, insightful evening with the authors shortlisted for this year’s Scotiabank Giller Prize

The five finalists will read from their novels, and discuss their characters and creative process on stage at Toronto’s Koerner Hall 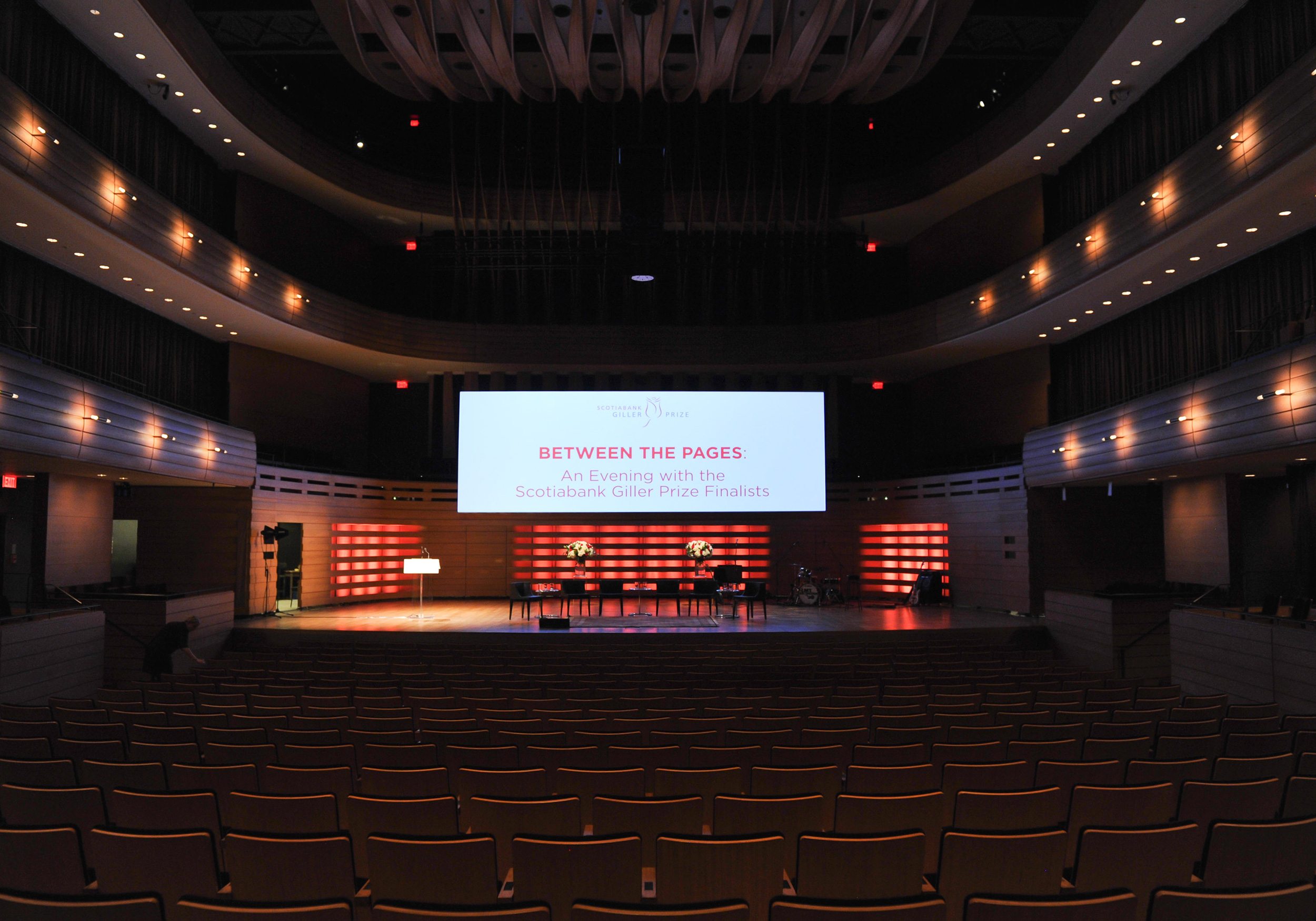 Who could resist a chance to get to inside the minds of Canada’s most talked about writers?

This year’s Scotiabank Giller Prize jury not only chose five engaging and entertaining works for the prestigious shortlist, but also chose authors who are themselves engaging and entertaining. Book lovers can experience all five finalists in a conversation about their work and their creative lives during Between the Pages: An Evening With the Scotiabank Giller Prize Finalists, which takes place in Toronto on Monday, November 6, at The Royal Conservatory of Music’s Koerner Hall.

Between the Pages gives audiences an opportunity to get to know the shortlisted authors before the winner is announced during the Scotiabank Giller Prize Gala, hosted by comedian Mary Walsh, on November 20. The Toronto Between the Pages event—moderated by Johanna Schneller, acclaimed film critic and host of the new CBC series The Filmmakers—is one of six celebrating the best of Canadian literature.

“Between the Pages is the most intimate and exclusive way to access the creative genius of some of Canada’s most extraordinary authors,” says Barry Avrich, who produces the event for the Scotiabank Giller Prize.

For the first time, audiences in Calgary, Ottawa and London, U.K., in addition to those in Toronto, Vancouver and Halifax, will also get a chance to experience Between the Pages. In Toronto, the authors will read from their novels before joining in a powerful conversation led by Schneller.

“Scotiabank has a deep and long-term commitment to supporting the arts in Canada,” says Jacquie Ryan, Vice-President, Sponsorship and Philanthropy at Scotiabank. “We believe the arts enrich our lives and our communities and encourage us to develop new perspectives. The Between the Pages events are an incredible way for literary fans across Canada to hear directly from the shortlisted authors and celebrate excellence in Canadian fiction. These authors help deliver enriched thinking to our collective experience of Canadian arts.”

The shortlisted books were chosen from 112 titles submitted by 73 publisher imprints from across the country. Collectively, the five writers cover an astonishing breadth of subject matter and setting: the adventures of a writer and her family moving into a dilapidated house in London, U.K. (Transit by Rachel Cusk); a mystery set on an expedition to the Arctic (Minds of Winter by Ed O’Loughlin); a literary thriller in which a woman meets her doppelganger in Toronto’s Kensington Market (Bellevue Square by Michael Redhill); the coming of age story of a Kitimat, B.C., teenager known for his weed cookies (Son of a Trickster by Eden Robinson); and a quirky tale of a woman searching for the truth about her husband’s disappearance in rural Acadia (I Am a Truck by Michelle Winters).

“Supporting and nurturing creativity is what the Scotiabank Giller Prize is all about,” says Elana Rabinovitch, Executive Director of Scotiabank Giller Prize. “These five writers, who’ve sequestered themselves for days, weeks, months and even years to shape words on the page, now get to share their gift for storytelling with the whole country.”

This year’s Scotiabank Giller Prize has a particular emotional weight, as it’s the first following the passing of trailblazing founder Jack Rabinovitch, who died on August 6 at the age of 87. A philanthropist, book lover and recipient of the Order of Canada, Rabinovitch established the Giller Prize in 1994 to honour his late wife, literary journalist Doris Giller. He’s survived by partner Judy Clarke, three daughters, Noni, Daphna and Elana, and three grandchildren, Jacob, Saffi and Luca. The family has been continuing Rabinovitch’s vision of celebrating the importance of Canadian literature.

At the time of its founding in 1994, the Giller was worth $25,000, coming out of the gates as the largest prize for literature in the country. In 2005, the Giller Prize teamed up with Scotiabank to create the Scotiabank Giller Prize, immediately doubling the purse to $50,000. Courtesy of Scotiabank, the top prize doubled again in 2014 to a life-changing $100,000 for the winner, with $10,000 for each of the four other finalists.

Of the five shortlisted authors this year, three have made the shortlist previously, while two were selected for the first time. The authors themselves hail from across Canada and around the world, and will travel from London, Dublin, Kitimat and Toronto to attend the six Between the Pages events.

Tickets can be purchased here for Between the Pages Toronto, which starts at 8 p.m. on Monday, November 6, at Koerner Hall (273 Bloor Street West).

The five Scotiabank Giller Prize shortlisted authors taking part in Between the Pages:

The Canadian-born, London-based writer was a finalist for the 2015 Scotiabank Giller Prize for her novel Outline. Her debut novel Saving Agnes won the Whitbread First Novel Award in 1993, while her book The Country Life won a Somerset Maugham Award in 1997.

Ed O’Loughlin for his novel Minds of Winter, published by House of Anansi Press.

Born in Toronto and raised in Ireland, O’Loughlin has been a journalist for the Irish Times, the Sydney Morning Herald and Melbourne’s The Age. His first novel, Not Untrue and Not Unkind, was longlisted for the Man Booker Prize in 2009 and shortlisted for the Kerry Group Irish Fiction Award.

A novelist, poet, playwright and former publisher of the literary journal Brick, Redhill was born in the United States and raised in Canada. His novel Martin Sloane was a finalist for the 2001 Giller Prize, and winner of both the Books in Canada First Novel Award in 2001 and the Commonwealth Writers Prize (Canadian-Caribbean Region) in 2002.

Eden Robinson for her novel Son of a Trickster, published by Alfred A. Knopf Canada.

The Haisla/Heiltsuk novelist lives in Kitimat, B.C. She won the U.K.’s Winifred Holtby Prize in 1997 for her collection of short stories Traplines. Her 2000 novel Monkey Beach won the Ethel Wilson Fiction Prize and was a finalist for the Giller Prize and for the Governor General’s Award for Fiction.

Michelle Winters for her novel I Am a Truck, published by Invisible Publishing.

A writer, painter and translator from Saint John, N.B., Winters now lives in Toronto. She was nominated for the 2011 Journey Prize. I Am a Truck is her debut novel.

Watch the broadcast of the Scotiabank Giller Prize Gala on CBC-TV starting at 8 p.m. (12:30 a.m. AT/1 a.m. NT) on Monday, November 20. Hosted by Mary Walsh, the event will also be livestreamed at CBCBooks.ca and will air on CBC Radio One as a broadcast special hosted by The Next Chapter’s Shelagh Rogers and CBC’s q books columnist Jael Richardson.