The Simpsons visited Canada last night, in an episode that featured Niagara Falls, the wonders of the Canadian healthcare system, and a fake Justin Trudeau. Here, for those who were too busy prepping for Game of Thrones, is a recap of some of the most outlandish moments. 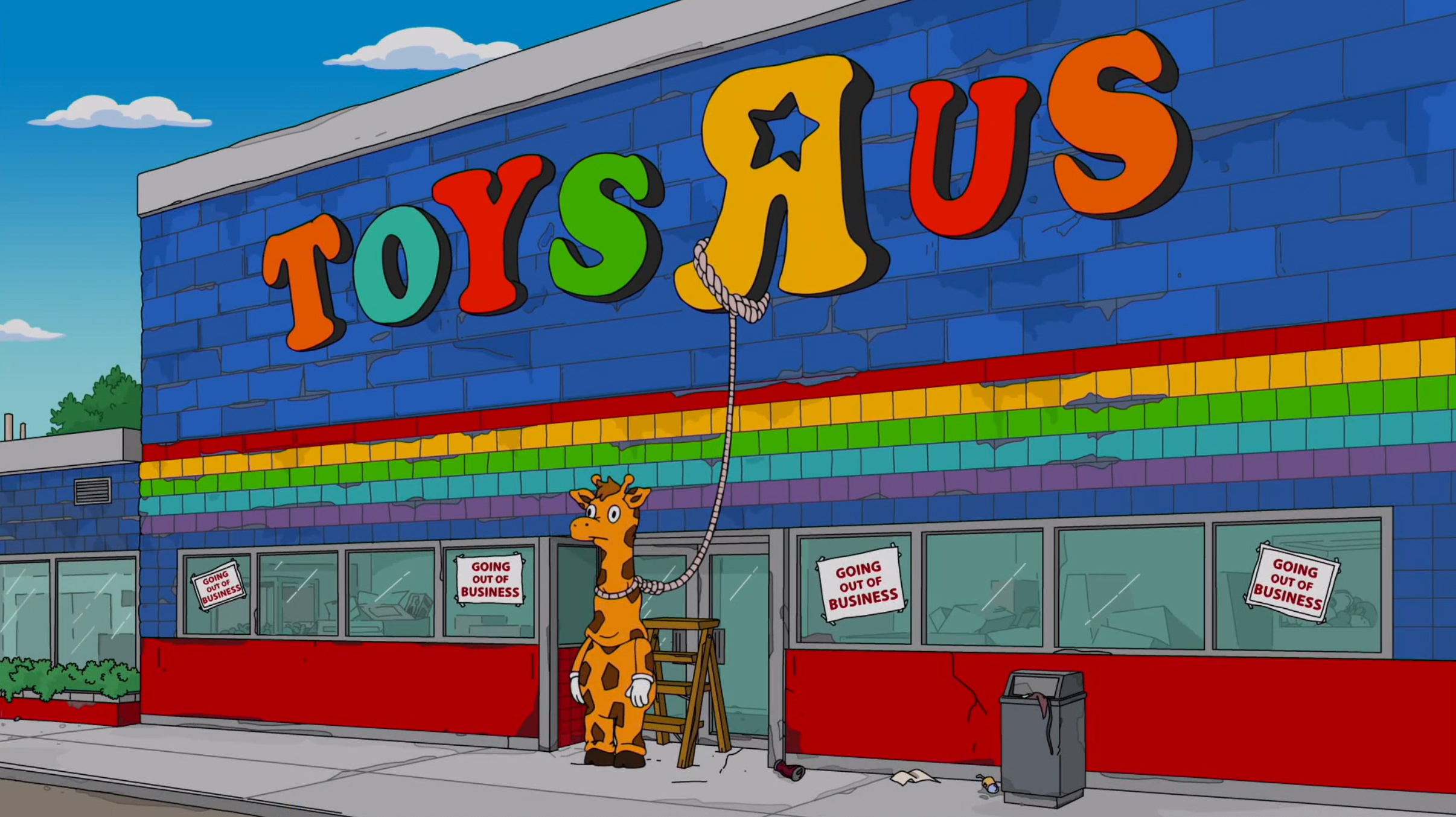 The visit to Buffalo

The family heads to Niagara Falls because Homer has points on his credit card. On the American side, the family skewers Buffalo, where they spy a closed-down Toys R Us, a bankrupt Sears and Roebuck and a Circuit City overrun by dogs. 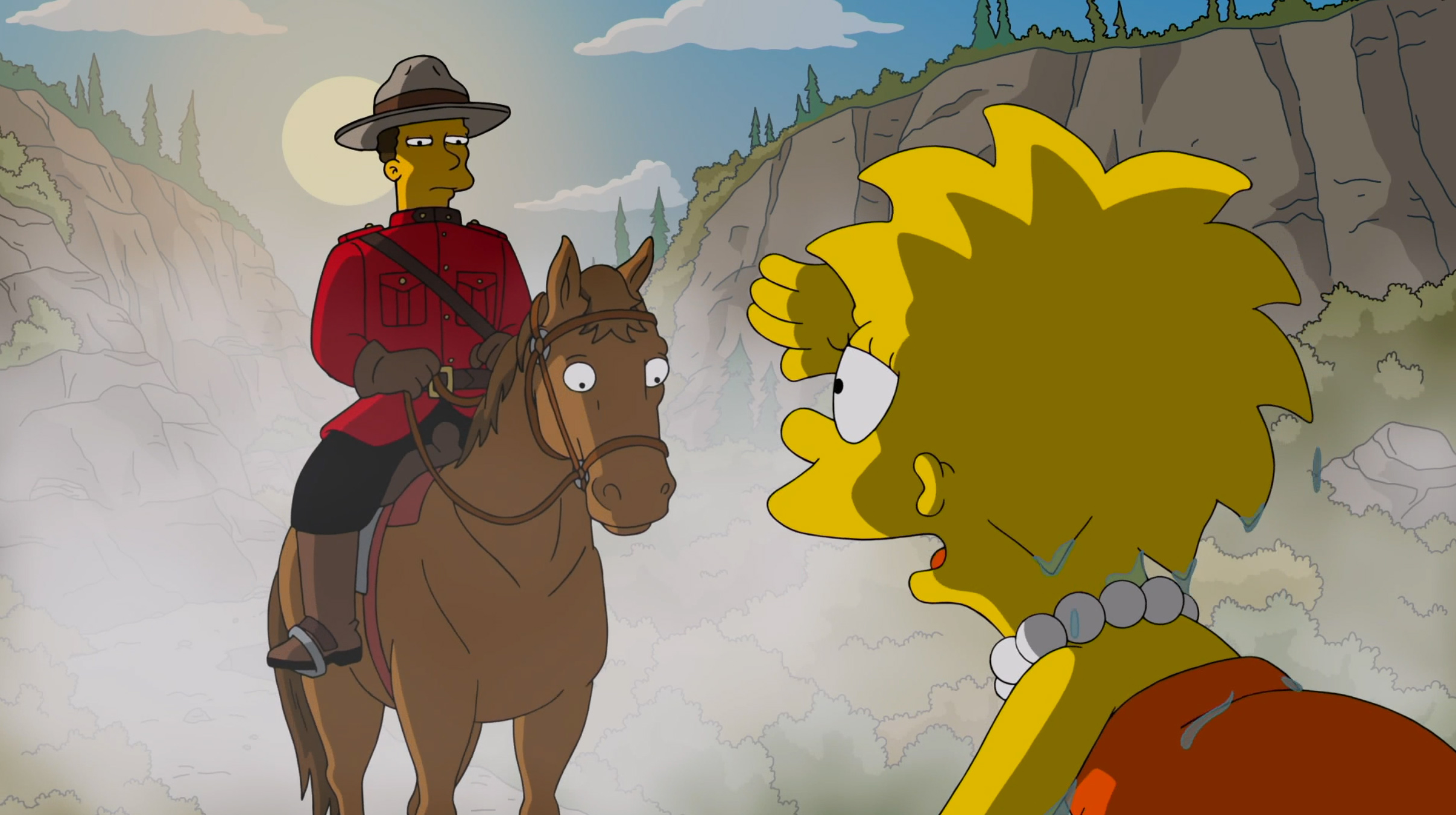 In a wacky turn of events, Lisa finds herself careening down the Falls, protected only by a plastic bubble. She survives and wakes in Canada, with a Mountie who says, “You’re in beautiful Canada—is what I’d say if Canadians weren’t too modest to brag. But we are.” (The “ehs” are out in full force. The Mountie says it at least three times in about 30 seconds.) The whole family is amazed that Lisa’s healthcare is free, as Lisa’s doctor, puzzlingly voiced by Awkwafina tells them. (Were Ellen Page, Pamela Anderson, Sandra Oh, Rachel McAdams, Cobie Smulders and Carly Rae Jepsen all busy?)

The protective Mountie keeps Lisa in Canada as a political refugee. She’s assigned her own hockey team (Canada likes hockey, get it?) and goes to Ottawa. Keen-eyed viewers will note her IV is labelled “maple syrup” (Canada likes maple syrup, you see). The America jokes are better: at one point Homer says, “You can’t separate us from our child—that’s America’s thing!” 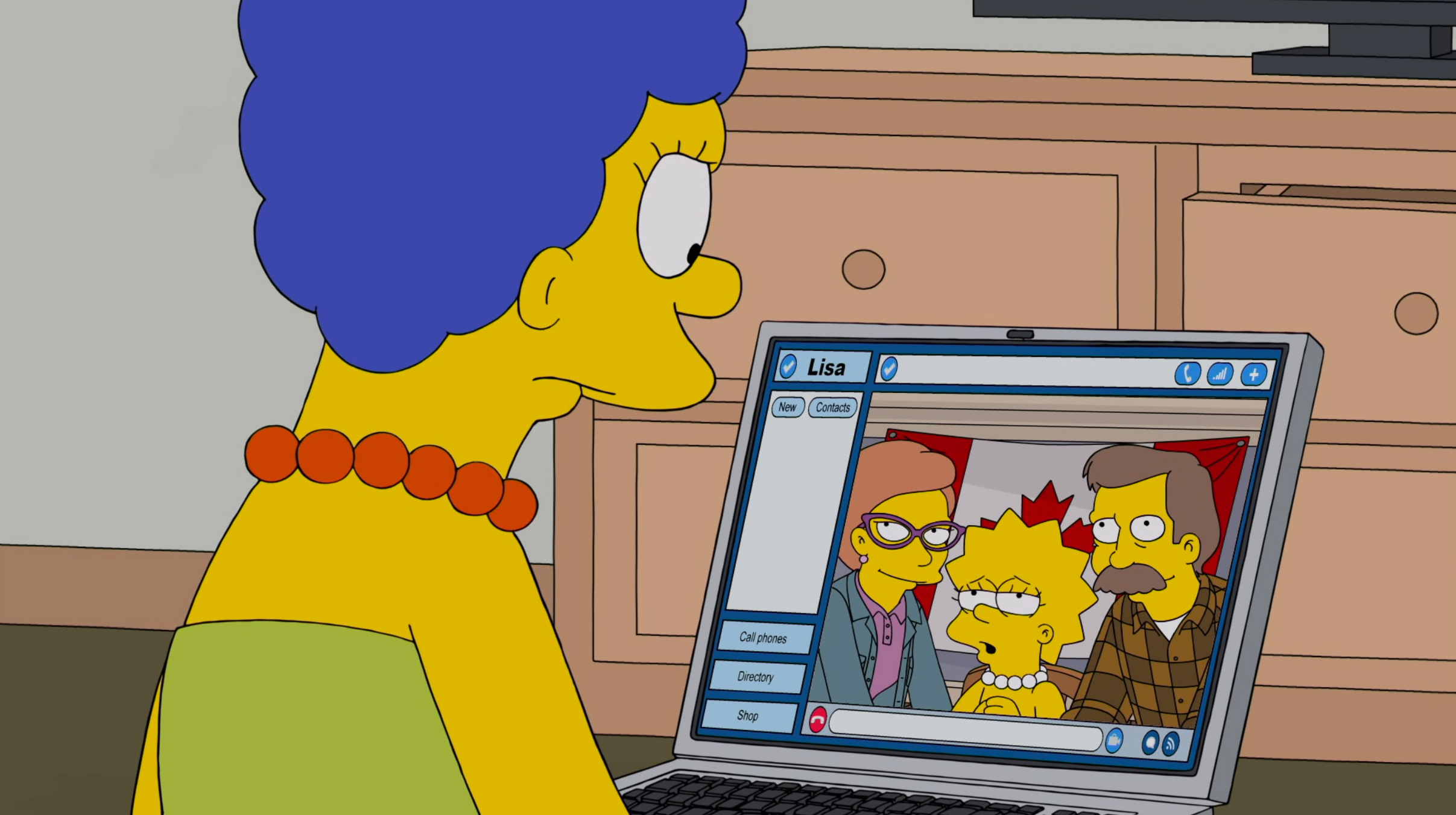 Lisa moves into a foster home and immediately adopts a Canadian accent that even Bob and Doug McKenzie would characterize as broad. (It’s forgotten immediately after this scene.) Her foster family offers her two choices for dinner: Harvey’s or Swiss Chalet. (She suggests Mr. Sub or Earl’s.) Other Canadian food options, for future Simpsons writers: Jack Astor’s, Cactus Club, St-Hubert. 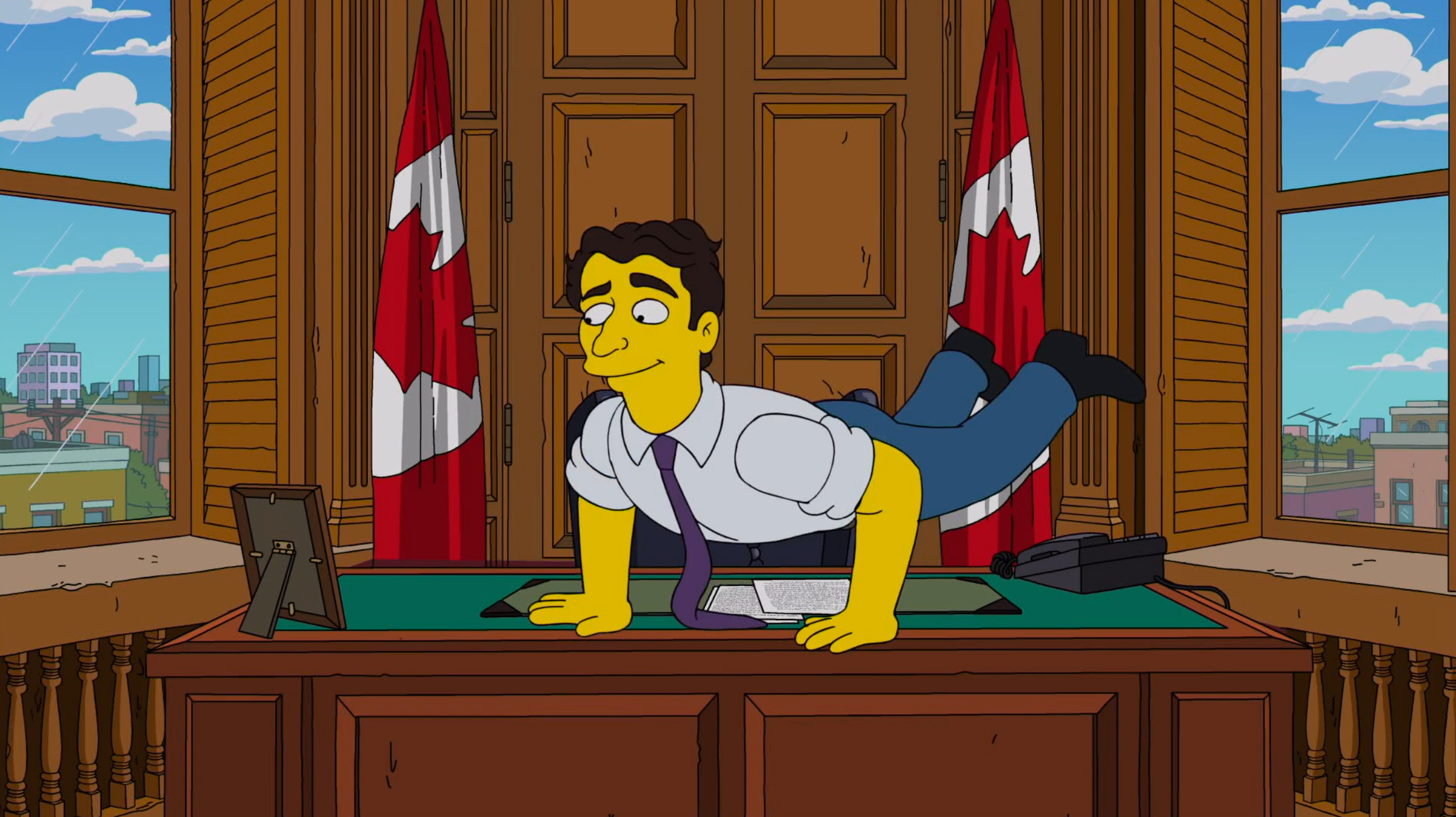 Lisa visits her school’s dedicated Skype The Prime Minister Room, where she interacts with Justin Trudeau, voiced by Canadian journalist Lucas Meyer. Lisa apologizes for a tweet where Donald Trump called Trudeau “meek and mild.” Fake Trudeau responds by planking on his desk. Lisa wants to ask about the SNC Lavalin scandal (topical!) and he leaps out the window, Mission: Impossible style. 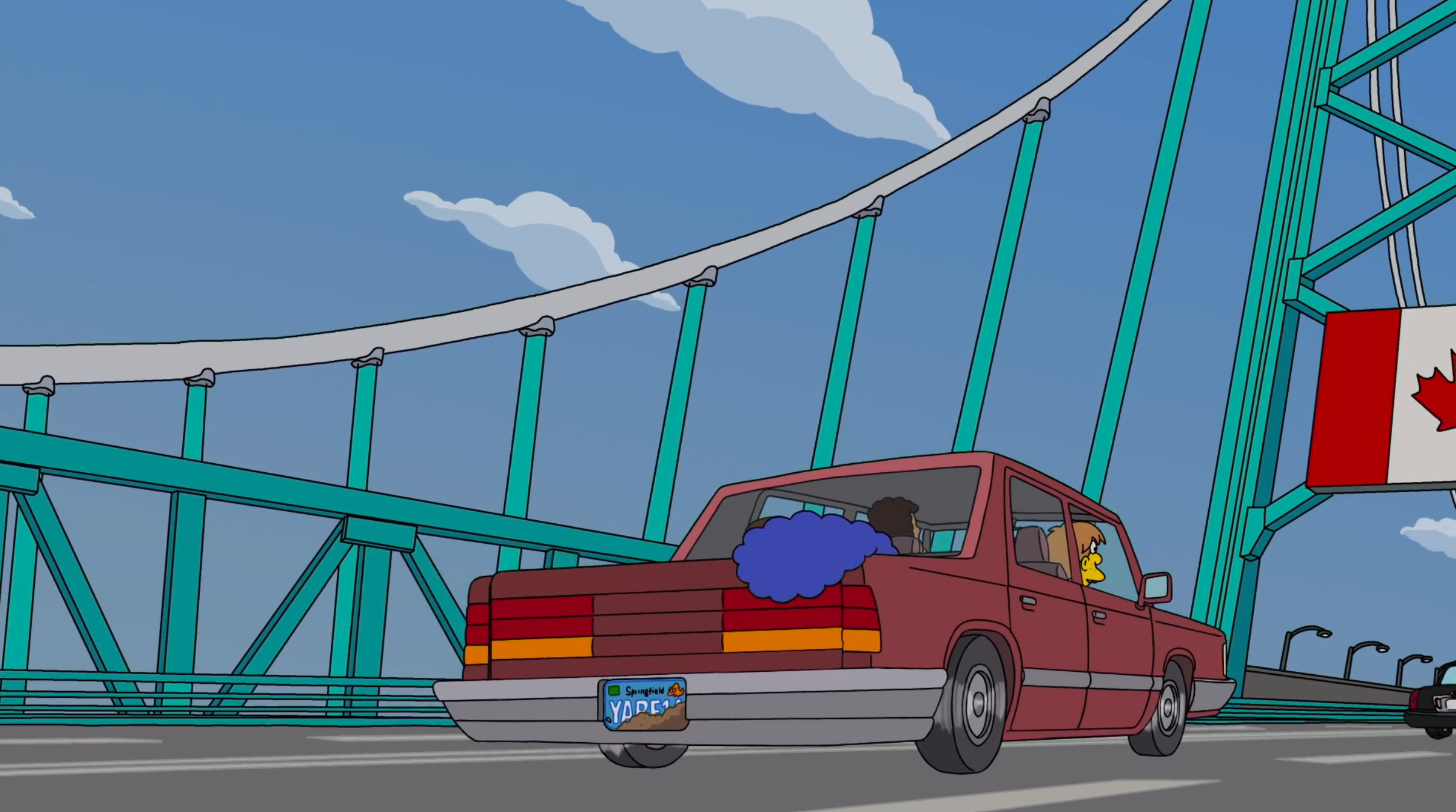 In a bid to get Lisa back, Marge sneaks into Canada in the squeaky voice teen’s car (FYI, his name is Steve Freedman, apparently), because’s crossing the border to buy beer.

Lisa wants to stay in Canada because it’s better: “Their Fox News is just news about foxes!” (Apparently no one knows about Rebel Media.) Marge attempts to convince her to come back, and her teacher makes the decision easier by telling her Canada exploits its environment too: “tar sands, strip mining, Mountie marking, geese goosing, French fry gravying.” Grasping for something, Lisa says that she’s sure Canada at least treats all people equally, to which the kids retort, “except the Quebecois. And the Newfies. Stupid Newfies!” A Canadian version of Ralph Wiggum sings a song about Newfoundland while kicking around a baby seal head—and yes, people are angry about this—at which point Lisa convinces herself that America isn’t so bad.