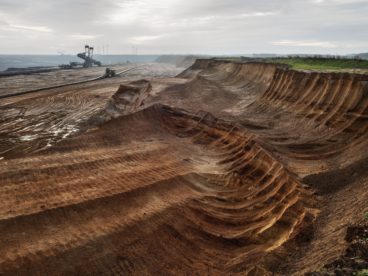 Over the past 40 years, the photographer Edward Burtynsky has hunted down the world’s largest marble quarries, clear-cut forests and solar power fields. His super-sized shots showcase our ravenous appetite for Earth’s resources—Burtynsky is a war photographer of natural landscapes. For his latest project, Anthropocene, he reunited with his frequent collaborators, filmmakers Jennifer Baichwal and Nicholas de Pencier. They travelled to 20 countries, collecting evidence of what some scientists call the anthropocene—a new epoch that began with the industrial revolution, maybe, or the nuclear bomb, in which humans took full possession of Earth. Burtynsky, characteristically, went big, producing a documentary that debuted at TIFF, a coffee table book and a multimedia exhibit, showing this fall at the National Gallery of Canada and the AGO. The result is urgent, edifying and technologically dazzling.

Burtynsky visited high-security sites usually hidden from the public eye: a German mine where massive vehicles move mountains to reach a vein of coal; hectares of evaporation pools in a remote Chilean desert; and the vertiginous pit of a 100-year-old New Mexican copper mine. He and his team brought along equipment to capture thousands of images to patch together augmented-reality experiences. At the AGO, you’ll be able to stand and gape, with the help of AR, among fields of burning elephant tusks and at the foot of Big Lonely Doug, the ancient Douglas fir that survived a rainforest clear cut on Vancouver Island. Here are the stories behind some of the exhibit’s most memorable images. 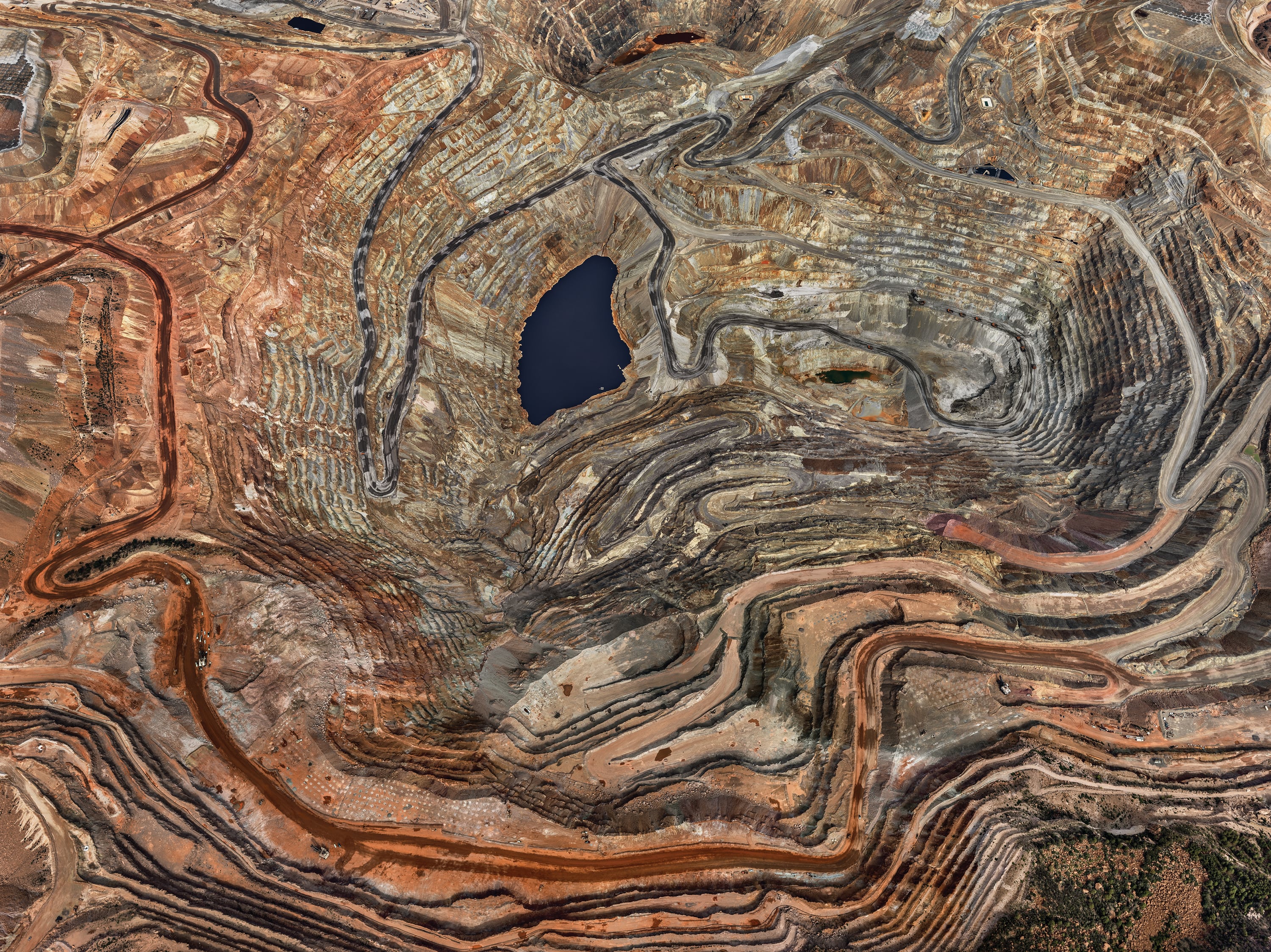 “Chino Mine #5, Silver City, New Mexico, USA, 2012”
Burtynsky and his crew couldn’t get permission to visit the Chino copper mine, which has been in operation since 1910. Instead, he hired a pilot with a Cessna. They flew back and forth over the pit, which stretches for nearly three kilometres and is more than 400 metres deep. The resulting photos show Burtynsky at his most abstract, capturing undulating forms and magnificent gradations of colour. 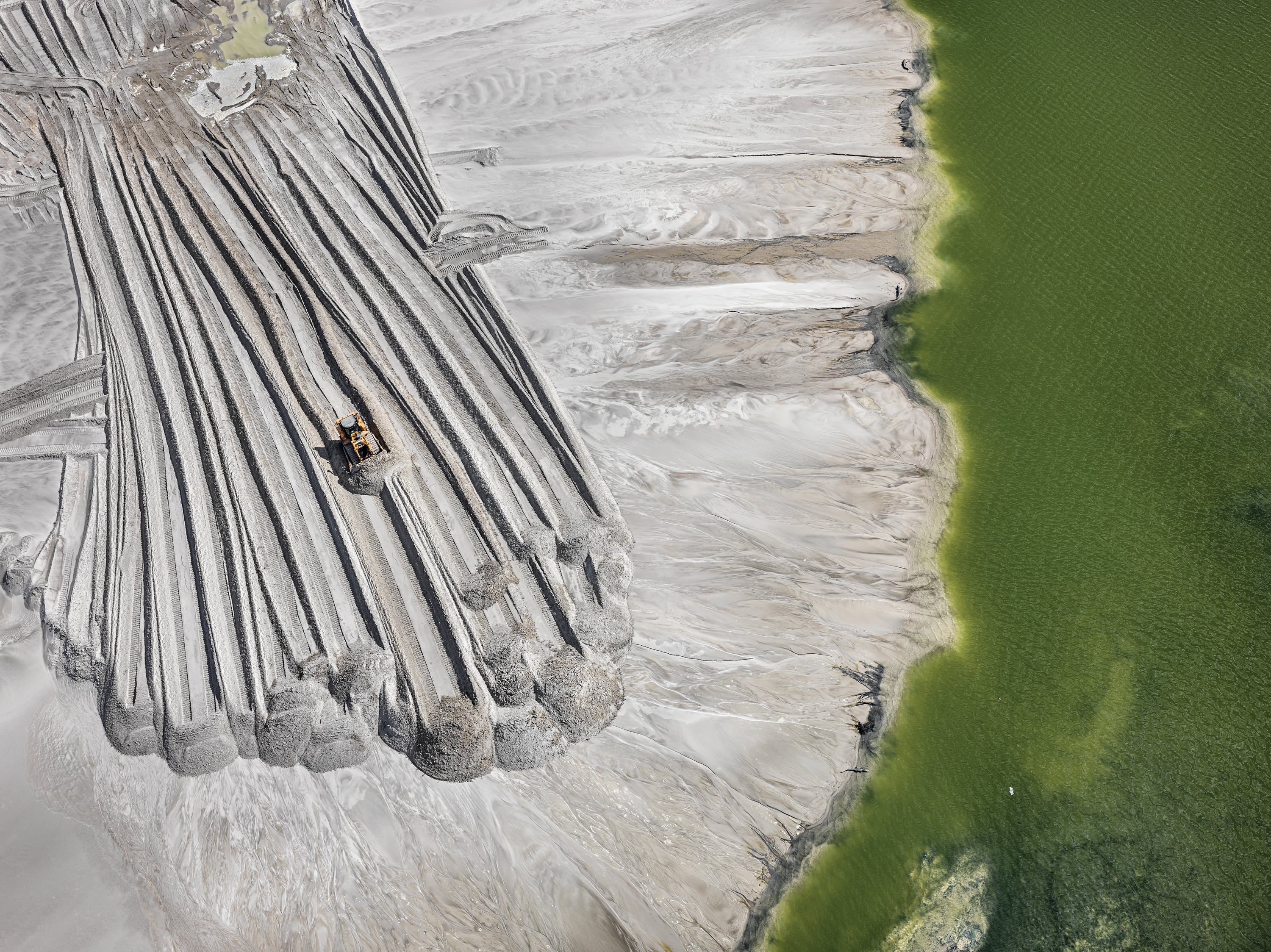 “Phosphor Tailings Pond #4, Near Lakeland, Florida, USA, 2012”
The fertilizers that make our agricultural industry possible are sourced, in large part, from phosphate surface mines. One of the most productive is in central Florida, a short drive from the Magic Kingdom. Thousands of hectares of land have been stripped of vegetation and wildlife to reach the phosphate rock deposits. The process of separating phosphate from clay leaves tailings ponds, which are hospitable to algae and not much else. The Center for Biological Diversity claims that Florida’s fertilizer companies have additionally produced a billion tonnes of radioactive waste, which is stored in sinkhole-prone stacks atop the state’s aquifer. 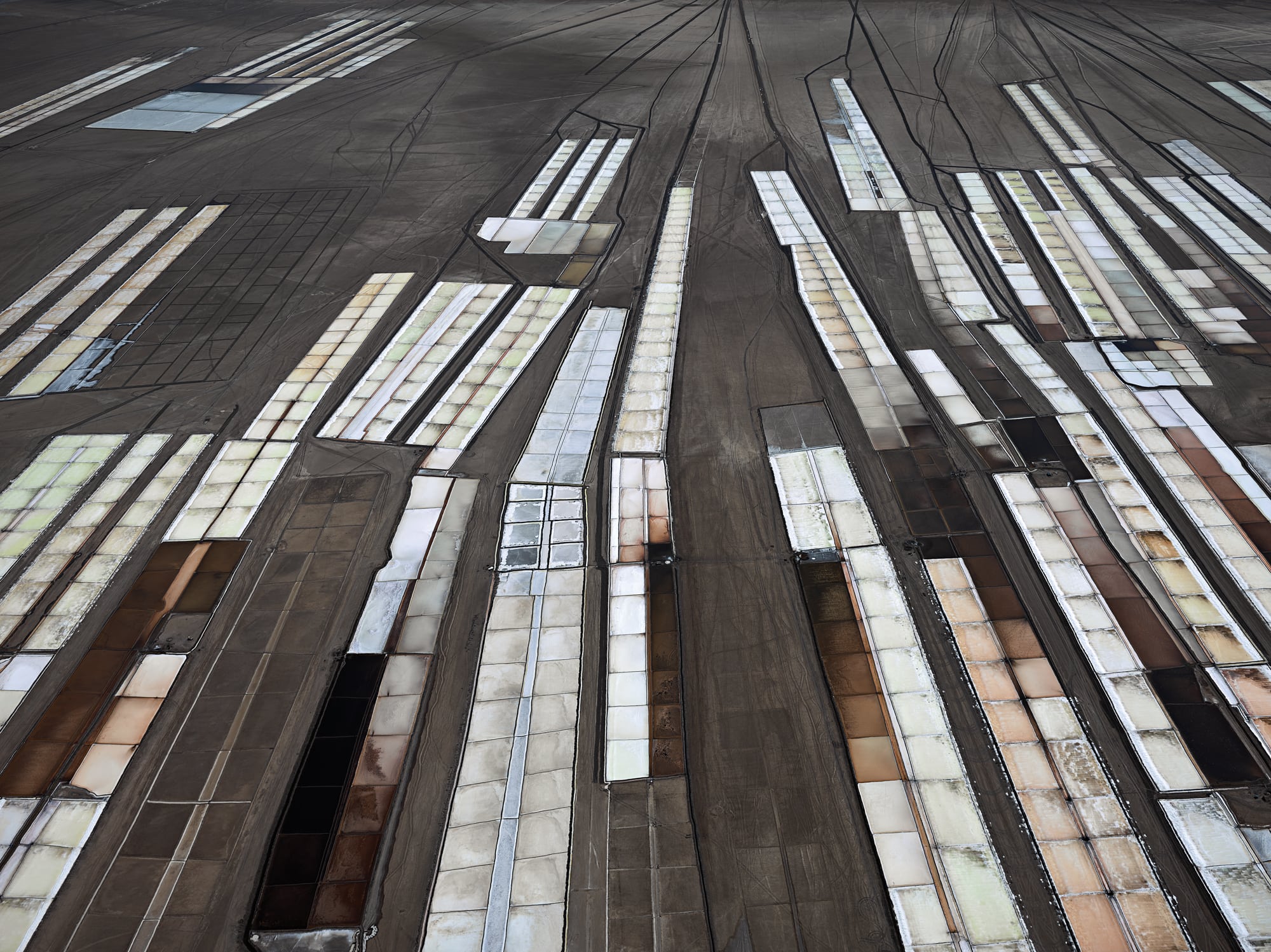 “Salt Pan #18, Little Rann of Kutch, Gujarat, India, 2016”
Four months of the year, the northwest part of the state of Gujarat is submerged in rain and sea water by the monsoon. During the dry season, it’s a marsh occupied by the Agariyas, a roaming community of 5,000 families who work in stifling heat to manufacture three-quarters of India’s salt. The air is filled with the roar and belch of diesel pumps as some 43,000 workers—mostly women—draw brine to the surface and direct it into clay beds formed by their feet, thump-thump-thump, to hasten evaporation. It’s a tough life: salt workers are afflicted with tuberculosis and skin lesions, and rarely live past 60. 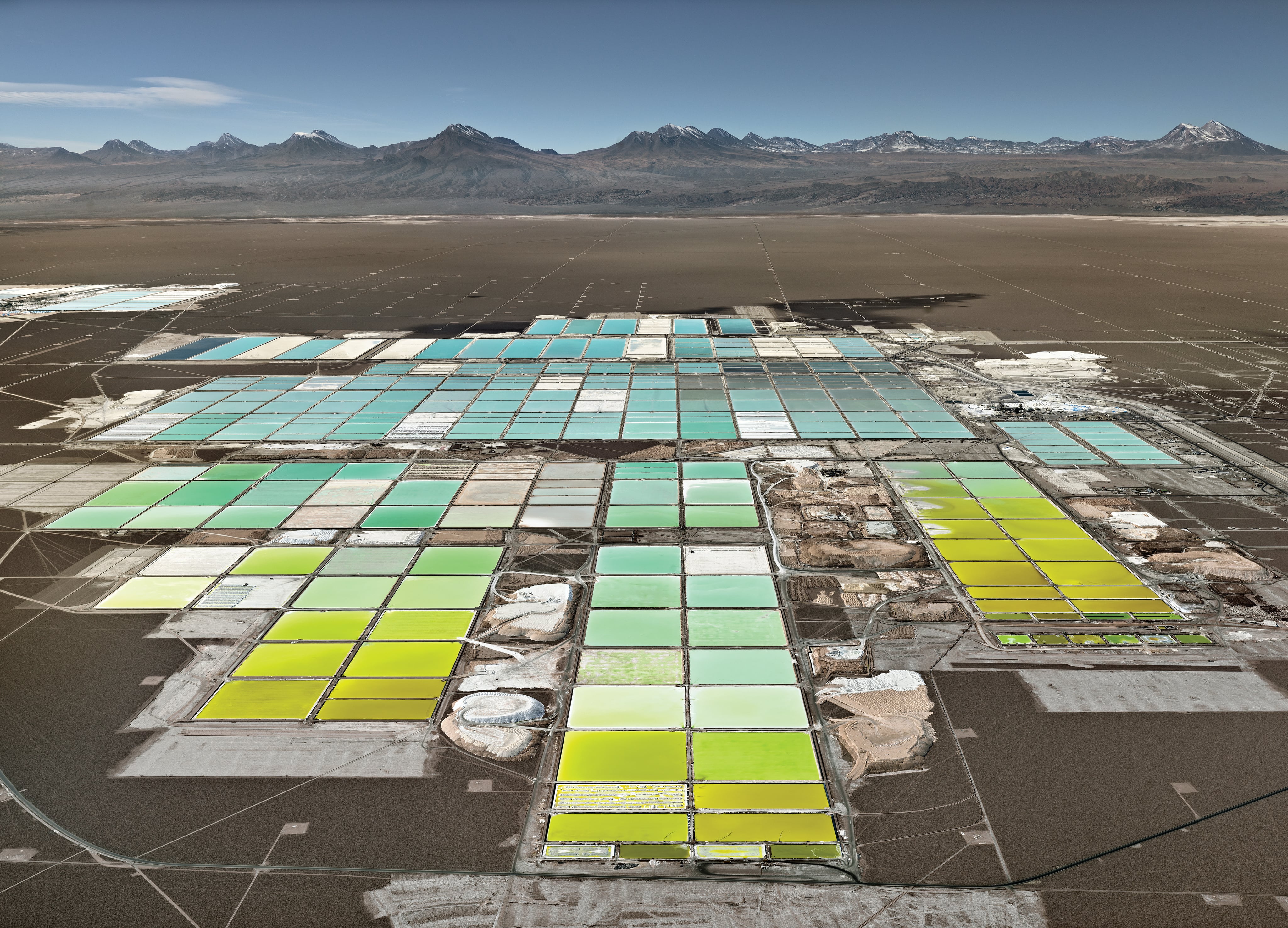 “Lithium Mines #1, Salt Flats, Atacama Desert, Chile, 2017”
Who knew lithium mining could be so pretty? The Atacama Desert, high in a barren corner of Chile, is home to the largest-known deposit of lithium, which powers the batteries in our phones and electric cars. Miners pump out salt and water from deep wells—they’re after the brine, of which less than one per cent is lithium. Through a slow, year-long evaporation, they concentrate the lithium and remove the salts, which creates this crazy quilt of blues and greens. In conceiving their Anthropocene project, Burtynsky and his collaborators wanted to balance good- and bad-news stories. Burtynsky, who drives a Tesla, believes that alternative energy stored in efficient lithium batteries is firmly in the former category. 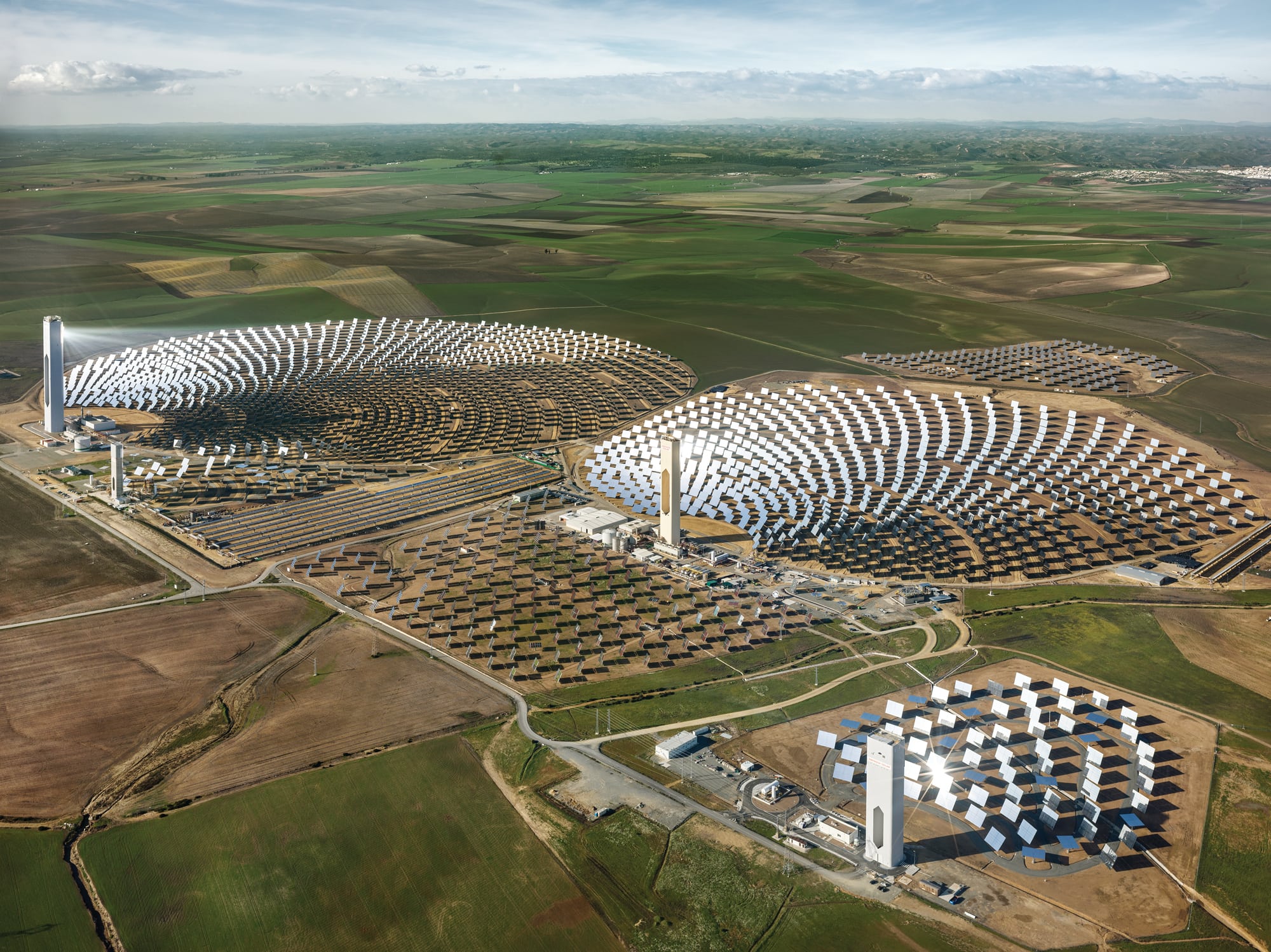 “PS10 Solar Power Plant, Seville, Spain, 2013”
The tower at the middle of this mirror display stands like a Tolkienesque oracle, but it’s located in rural Spain, not Mordor. This is another of Burtynsky’s good-news stories. An array of 624 heliostats, spread over 170 acres, pivots with the sun and directs reflected solar radiation at the tower, which reaches temperatures of 1,000 degrees Fahrenheit. It heats a circuit of water pipes, which in turn drive a series of turbines that create enough electricity to power 6,000 homes. The project is such a success that the government is building more towers to supply all 700,000 of Seville’s residents. 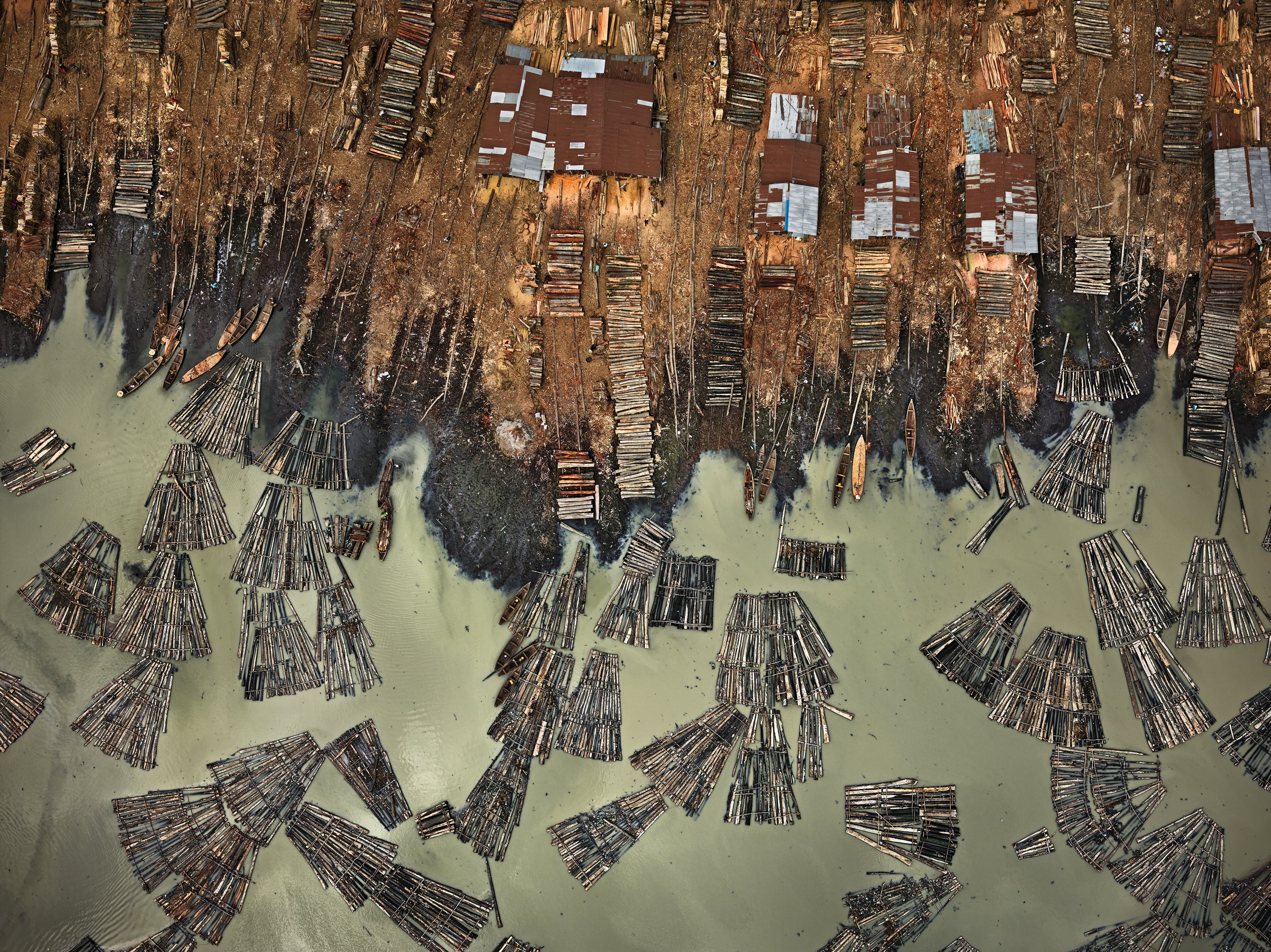 “Saw Mills #1, Lagos, Nigeria, 2016”
Lagos is set to become one of the biggest cities in the world, and Nigeria the third-most populous country, by 2050. Much of that growth is fuelled by the rapid expansion of the country’s resources sector, bankrolled by Chinese companies hungry for Nigeria’s oil. Burtynsky is especially fascinated by the chaos of the Niger Delta, where militants fight the government for control. Parts of the delta are choked with floating booms, like these, of trees felled in ancient forests, en route to the lumber mills that supply construction in Lagos. 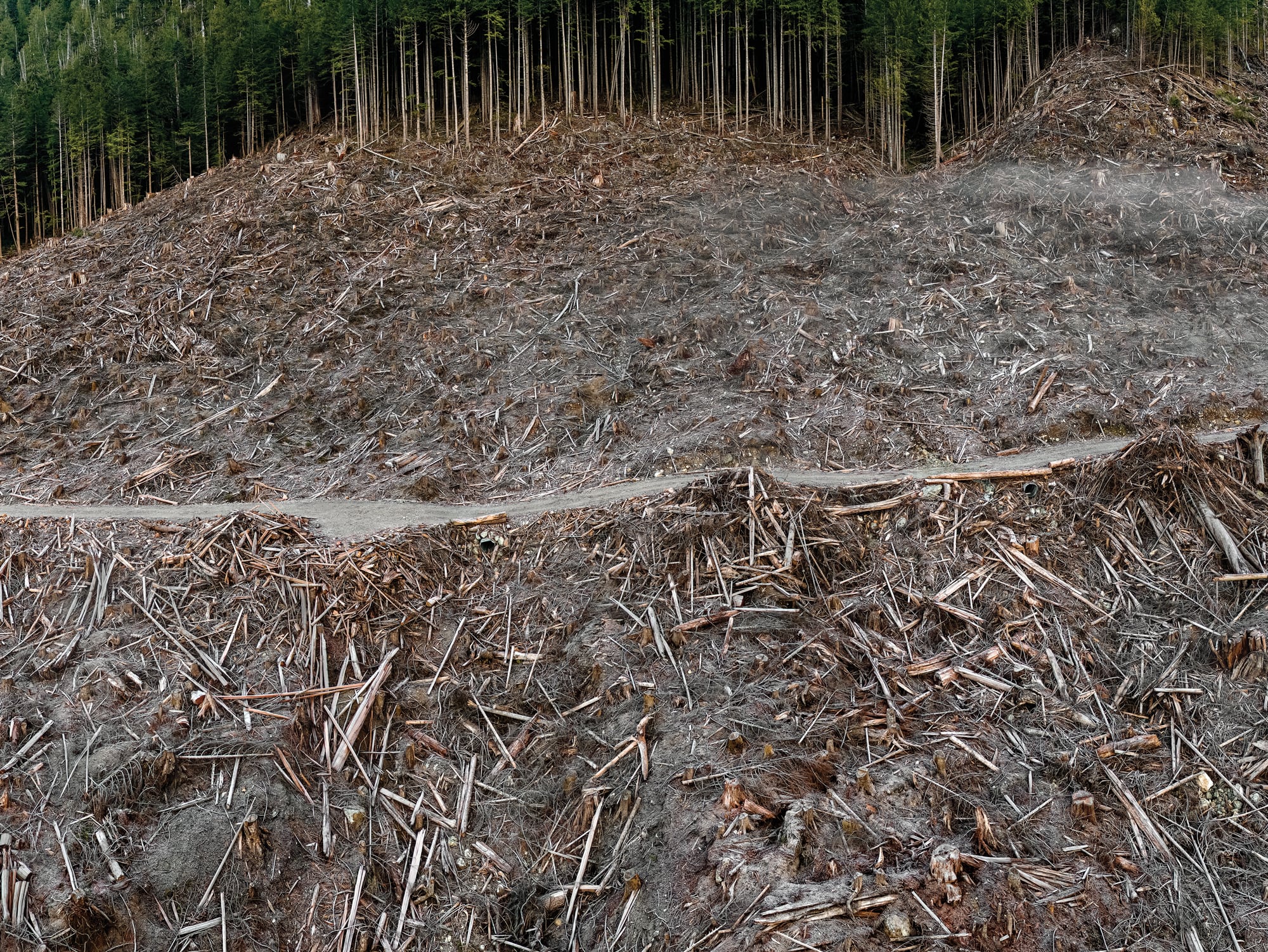 “Clearcut #5, Vancouver Island, British Columbia, Canada, 2017”
During his career, Burtynsky has returned several times to document British Columbia’s logging industry, particularly the clear cuts of Vancouver Island. Some of the tallest trees on the planet live in its temperate rainforests, which are steadily being felled and replaced by monoculture forest that will someday be felled in turn. “These are business-as-usual landscapes,” he says. “All these companies have licences and permissions.” Last year, he made a special trip to see the iconic Douglas fir known as Big Lonely Doug, which stands alone in a field that once teemed with rainforest life—a fitting symbol of defiance. Burtynsky and his crew captured more than 7,000 images for an at-scale AR experience that allows the viewer to climb 66 metres to the very top of Big Lonely Doug. 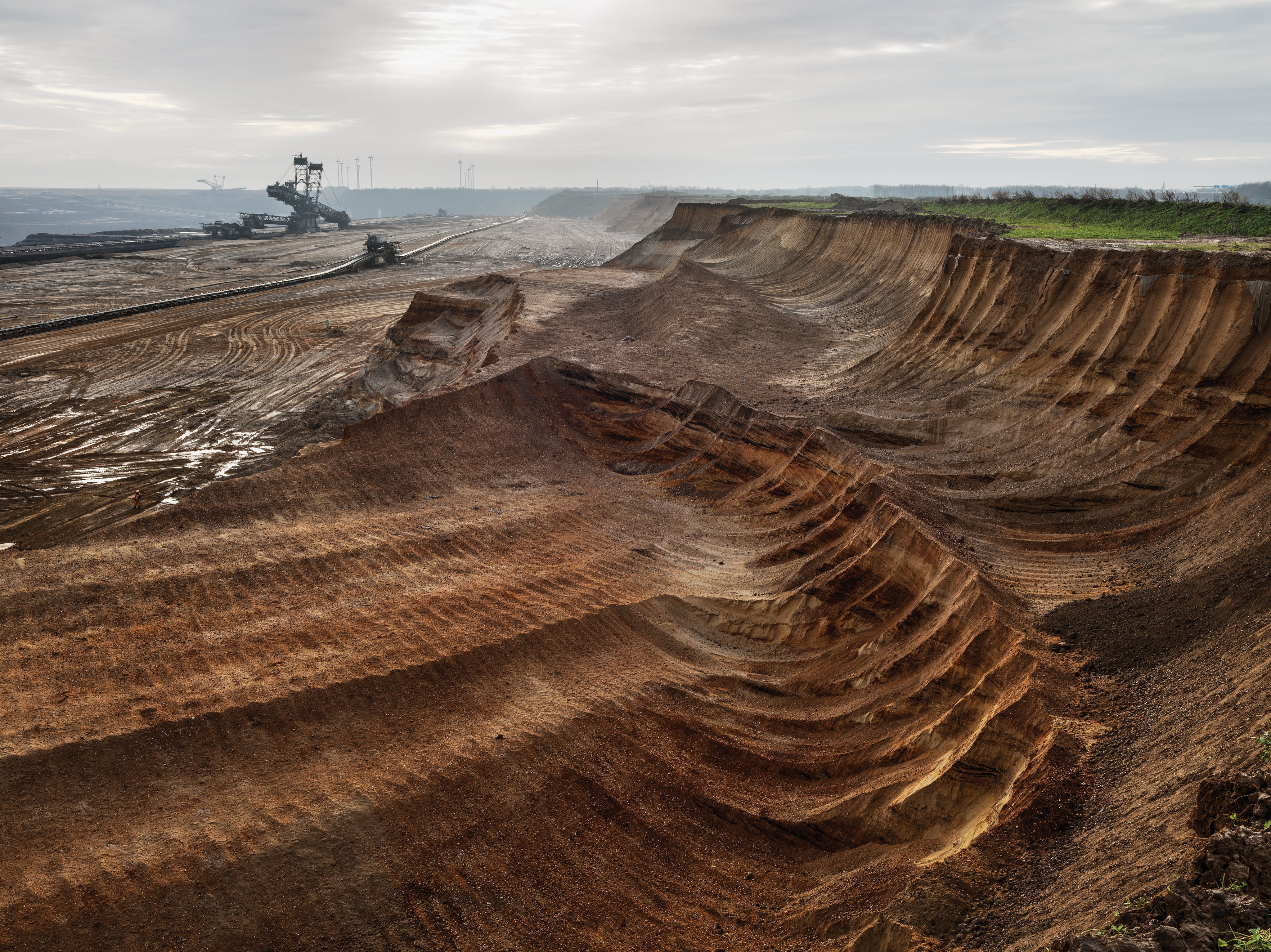 “Coal Mine #1, North Rhine, Westphalia, Germany, 2015”
Rumbling through Hambach, Germany’s largest open-pit mine, are the world’s biggest land vehicles. The German-engineered Bagger 291 and Bagger 293 are 200 metres long, 100 metres tall and roughly 14,000 tonnes each. They excavate, haul and dump mountains of sand and gravel to reach a deep-buried coal deposit. Entire towns have been expropriated and moved, and highways destroyed, to make way for the mine. Burtynsky’s aim was to capture the seemingly impossible scale of the coal operation, which only grows despite what we know about its lethal impact.

This story originally appeared in the October 2018 issue of Toronto Life magazine. To subscribe, for just $29.95 a year, click here.