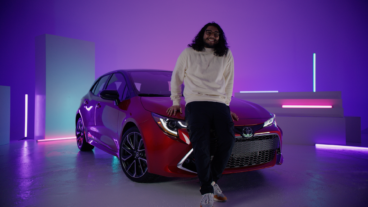 We’re celebrating Canadians across the country who are innovating in their industry, pushing the status quo and creating positive momentum in the world

This piece is part of Trailblazers, a four-part series that pairs Toyota Corolla vehicles with Canadian luminaries for a journey into their past, present and future.

Meet Anil Mohabir, self-taught coding prodigy, creative technologist and founder of Studio AM, specializing in livestreams, virtual events, 360-degree video and VR. During the pandemic, he became a master of remote video production, developing strategies and tools for virtual shoots that “blur the line between the physical and the digital.”

How did you get your start? Tell us how you found your calling.

I learned how to code when I was young by watching tutorials online; I never did any kind of formal education after high school. I built a user interface for Windows mobile devices that got some attention and was recognized by coders—who didn’t know I was just 16. I started working with Microsoft and then spent the next few years bouncing between projects in LA, New York and Seattle.

How have your passions evolved over time?

At 19, I moved back home to Toronto to help develop the student experience at a tech school. I was also bartending just for fun and to meet people. That’s where I met the guy who would later be my business partner. He had founded Asterisk Media, and he brought me into the company, where I started Asterisk Interactive, which specialized in 360 video, livestreaming and new tech. At the time, we were mostly doing immersive installations, like really big projections of the Raptors from Jurassic Park onto the Rogers Centre when they won [the championship]. Then Asterisk Media was acquired by Icon Media, which does all kinds of large-format projects.

At the start of 2019, I left to start Studio AM, which at the time was focused on installs and stage designs. But within a few weeks of starting Studio AM, there was Covid, so we pivoted toward online productions. Our entire streaming part of the business wouldn’t even exist if it weren’t for Covid.

What have been the catalysts for growth in your life and career?

Learning as I go. The best part of having no official training is that in your head, you never limit what you can or can’t work on, so I change constantly. What am I going to be doing six months from now? I really don’t know and I kind of love that. 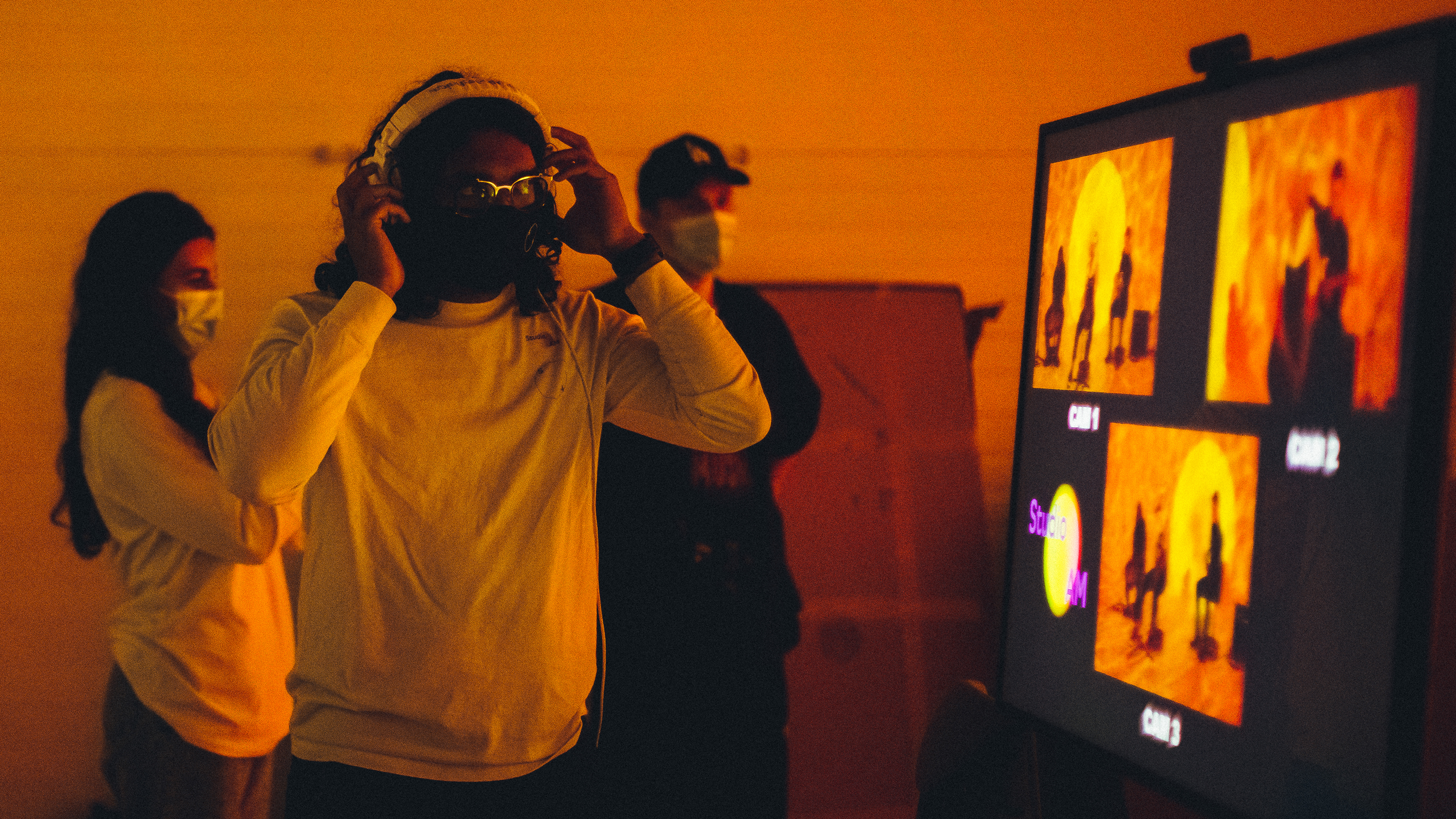 Was there a breakthrough moment where you thought, I’ve made it!? Tell us about it.

Not really. Actually​​—it’s been a gradual progression. Our very first streaming client was Budweiser, a spot we filmed with Chris Bosh and Dwyane Wade. Now this was peak  Covid, so basically we sent out a remote filming kit for them to collect footage at home, in their own houses. But it worked and it had a cool effect, and the folks working with Budweiser then introduced us to a bunch of other clients. We’ve since filmed Justin Bieber in California, Drake at his house and Shakira in Spain—all remotely. We’ve recently produced some commercials, like a 3-D Yonge and Dundas ad and another for Apple TV with Jason Momoa. These were all pivotal moments, but there wasn’t just one. 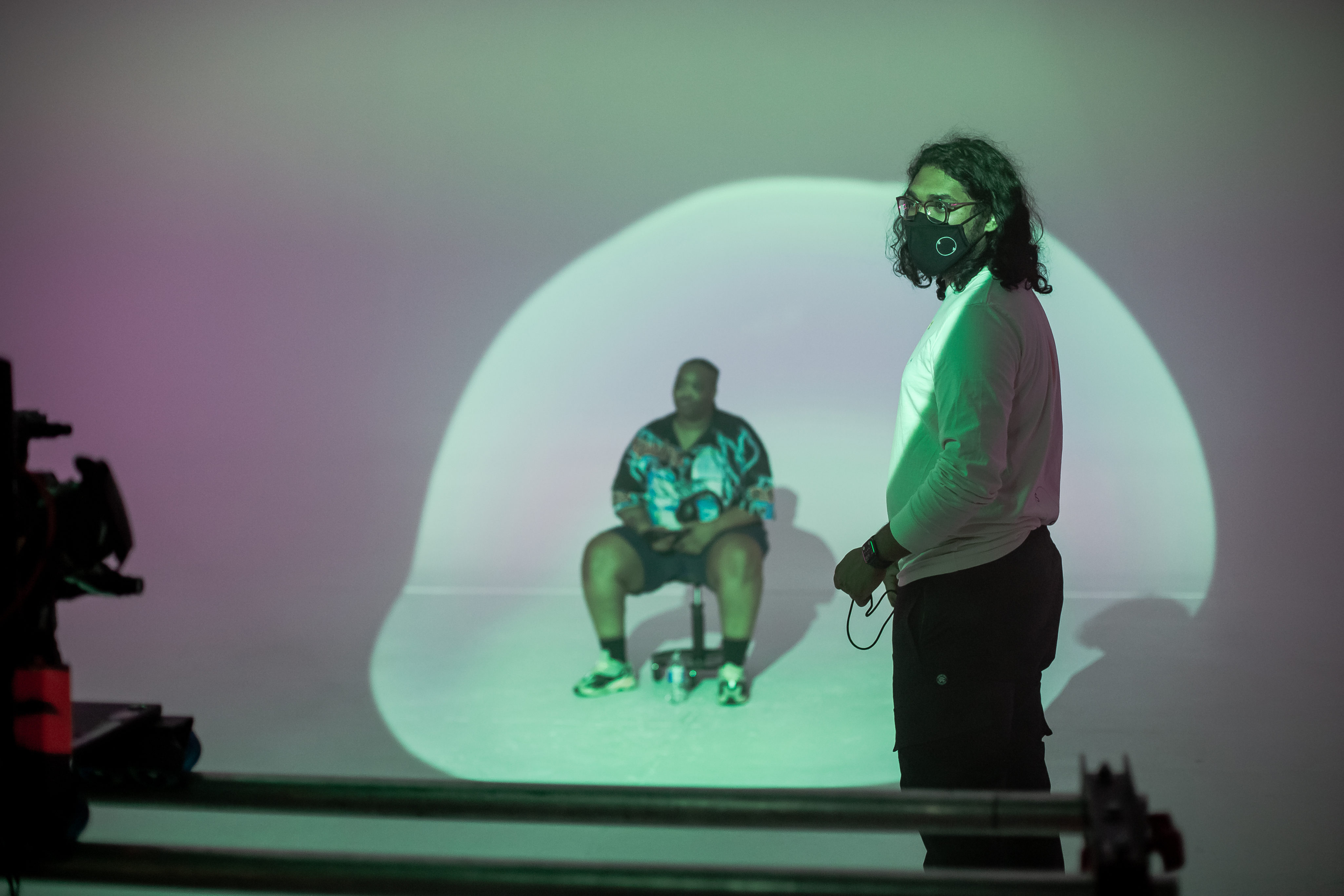 Tell us about your most challenging moment and how you got through it.

The hardest part was at the start when we really had to cobble things together using whatever tech people had available. We ended up making our own platform, River, which uses these modules that go onto film sets and bounce the footage all around the world. We did a crazy shoot for Airbnb where we were in 22 countries in one week. The director was in Brazil, the producers were in LA, I was in Toronto. The shots were people ringing doorbells in 22 different countries. For that, we had to work with local crews on the ground and coordinate our equipment. That’s a lot of people who all have to work together, and the technology made it possible.

Is there such a thing as a typical day in your world? What does it look like?

If I’m on set, my day is pretty structured; we’ll start at 5 or 6 a.m., set up and film, then we’ll stream it and add real-time graphics. Then we’re back at the studio the next day to regroup with the team and fix the footage. If I’m not on set, I might have a few meetings with clients, probably virtual, but I’ll still usually come into the studio. I live super close and I like the walk. 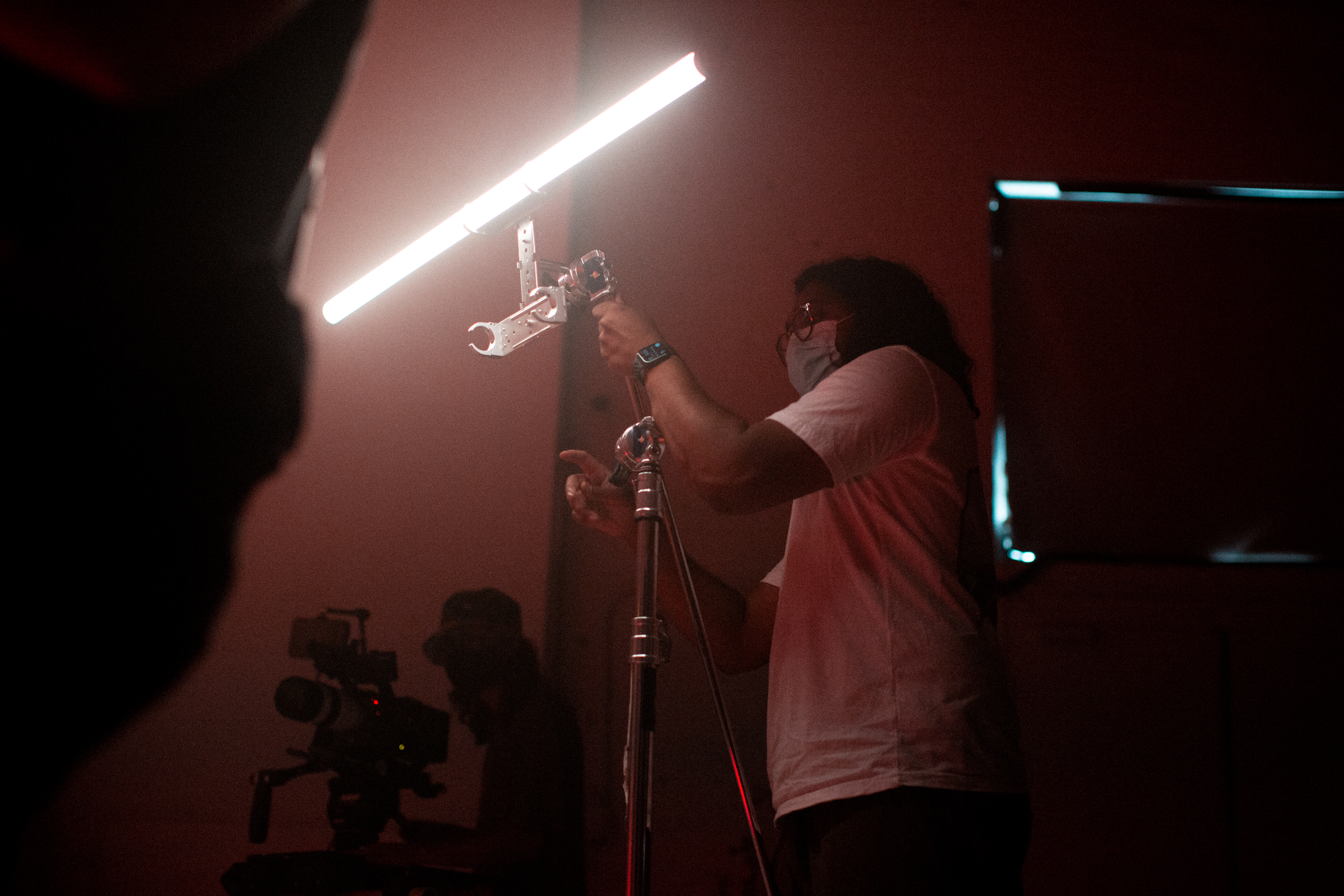 How do you stay connected to what’s most important when life gets busy and overwhelming?

Because I work contract to contract, which sometimes means 16- or 20-hour days for six or seven months straight, I tend to go dark on my friends and family when I have to focus on work. I do try to keep in touch digitally, but the people who know me understand that I’m just really busy and that I will see them on the other side. I’m on the chill side right now, so I try to enjoy it and use this time to catch up, see my family and take lots of walks—just stopping and breathing, really. I also try to read a lot then, especially sci-fi. Right now I’m reading Midnight Robber by Nalo Hopkinson. I love that it’s sci-fi in a Caribbean setting.

What do you do to unwind and recharge?

I love to cook. My grandmother taught me to make these Guyanese dumplings that we call duff, and I’m always experimenting with what to put in them. Last time I cooked down spinach and mushrooms first and put them inside the dumpling, which then went into a coconut milk–based soup. Then I fried some plantains to go on top. This winter, any time someone got sick, I delivered a whole batch to that friend. 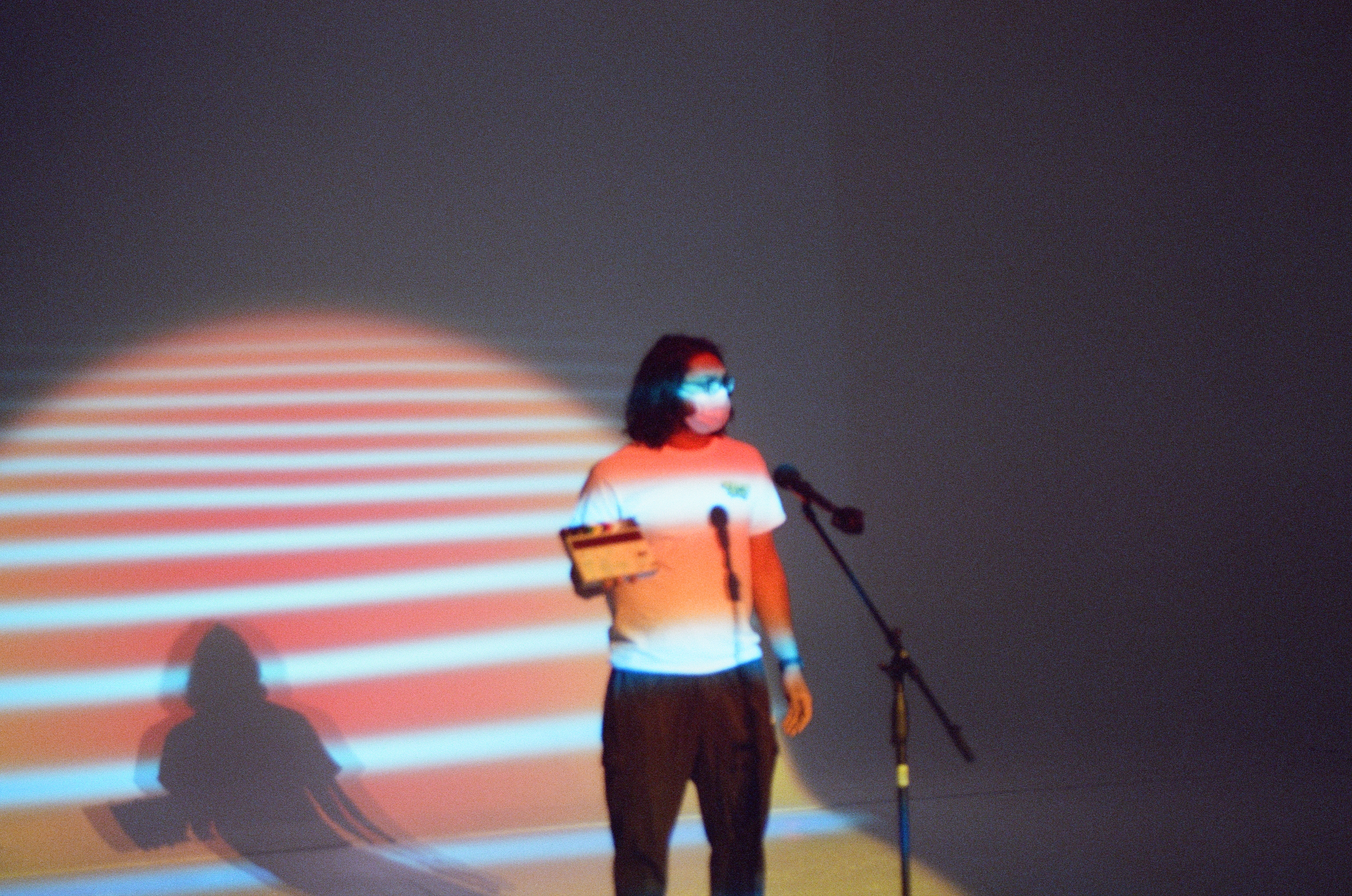 What motivates you to keep growing?

Honestly, looking backward helps me move forward and keeps me going. It inspires me to look through all our videos and see all the things we’ve made and put into the world. As for the future, I focus on trying to be better and trying to make everything we’re doing more accessible for everyone. I want everyone to be able to access the technology they need to create what inspires them.

What are you most looking forward to this year?

We have a few commercials that we’re doing in Toronto, and we just wrapped up a virtual shoot for Major League Soccer and Salesforce. Another big focus for us will be the 55 Sessions live music series with local singers and building up the River platform. After that, I really don’t know and I love that. All would have been hobbies that I’m instead getting paid for. I’m so lucky.