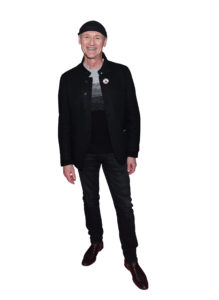 You were supposed to spend the next few months performing the lead in one of Shakespeare’s greatest works, Richard III. Now the festival is on hold and you’re stuck at home. Talk about the summer of our discontent.
Ha! I hadn’t heard that one. Though it’s not like I’ve been talking to many people. As far as the festival is concerned, it’s more than on hold. My colleagues and I have had our contracts cancelled. We had 15 hugely ambitious shows planned, plus the debut of the $100-million Tom Patterson Theatre, where I was to be the first actor to perform.

That must be disappointing. And now you’re home in Stratford. How are you coping with the change?
When we first went into lockdown, I will confess to something like a state of shock. And then there was some denial. I’m still walking around the house running my lines. My wife, Donna—a director whose production of Chicago was going to be at Stratford this summer—was like, “Dream on, dude.” She’s had a good attitude. She’s treating this like the sabbatical she always wanted.

Shakespeare wrote some of his greatest plays during the plague. Does that make you feel inspired or inadequate?
That plague was only in the city, so actors took their shows on the road, and Shakespeare went back to his home in Stratford-upon-Avon. Apparently that’s when he wrote King Lear. I don’t think I’m quite achieving that level of productivity, but I want to keep my skills sharp. Before I’ve opened my eyes in the morning, I’m working my lines. My wife will look over and say, “You’re doing the soliloquy, aren’t you?”

Does it kill you that you might never get to deliver that soliloquy?
Actually, I played Richard III at Stratford 32 years ago. As for the work I put in, I love it. I’ve read three Richard III biographies, I’ve seen his autopsy report. And I’ve watched so many brilliant actors perform the role, especially Olivier. By the time I’m delivering the lines to an audience—fingers crossed—I’ll have said them probably 100,000 times.

The festival has asked the government for $8 million in funding. Care to make a personal appeal to the feds?
The festival creates 3,000 jobs, drives $135 million in business and generates $65 million in taxes. And the majority of the festival is funded by ticket sales. The related businesses—the B&Bs, restaurants, dry cleaners—are so screwed it’s not even funny.

You joked recently that everyone in Stratford is either sad, depressed or drunk. Which are you?
All of the above? If I wrote a book right now, I would call it Boredom, Books and Booze.

And what are you drinking and reading right now?
When the sun shines, pink wine. Late in the day sees the invention of cocktails. I’m reading Rick Wilson’s Everything Trump Touches Dies and a great deal of Stephen Greenblatt. Richard III has a lot to say about leaders who shouldn’t be leaders, who achieve their goals but are incompetent, miserable humans.

When you look into the future, what does live theatre look like?
I know that social distancing isn’t going to work for us. If you put someone in every second or 14th seat, apart from the fact that you’d have to charge $2,000 a ticket, that’s just not the desired experience. Theatre, concerts, opera—these are communal, near-religious experiences, where we are taken out of ourselves to learn more about who we are. You can’t do that on Zoom.

What about the future of Hollywood?
I know there’s a lot of money involved, which means people are working hard on a solution. The second season of my series, The Umbrella Academy, was in post-production when the pandemic started, so we were lucky in that sense. I’m not sure how a third season would work, but I’m hopeful. The bills are piling up.

Have you considered any backup plans?
Well, I like to sharpen my kitchen knives in my spare time, so I’m thinking I might stand at the end of my driveway—you come by, I’ll sharpen your knives and deliver whatever Shakespeare soliloquy you want for five bucks. I’ll call it Sharpen and Shakes. It’s not a great plan, but at least I’ve got one.