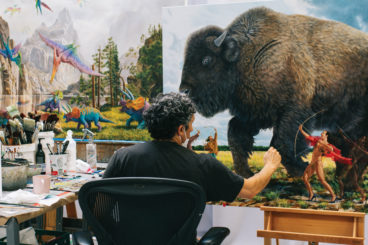 Kent Monkman, Canada’s most mischievous artist, has a sprawling new exhibition that traces Indigenous knowledge back to the beginning of time. It’s a rainbow-hued romp filled with flying reptiles, drag queens and serious subtext

Cree painter Kent Monkman is widely considered to be the most famous artist in Canada, but he doesn’t seem to agree. “I think it’s actually Céline Dion,” he says with a laugh at his studio in Toronto’s west end.

Whether Monkman believes it or not, he’s cemented his place in art world superstardom. He had a career-crowning exhibit at New York’s Metropolitan Museum of Art in 2019, his Picton home was recently featured in Architectural Digest and his larger pieces often fetch up to six figures.

The artist’s latest exhibition, Being Legendary, showing at the Royal Ontario Museum until March 2023, is a Monkmanian masterpiece. The title is a reference to how knowledge is passed down through oral storytelling, or legends. The artist has also incorporated his own interpretations of legendary beings from Cree mythology: wîsahkêcâhk, a trickster who takes the form of a coyote; mîmîkwîsiwak, four-inch-tall people; piyêsiwak, thunder beings depicted as rainbow-coloured flying reptiles; and misipisiwak, water-dwelling lynx that resemble triceratops.

In Being Legendary, Monkman tells the origin story of his two-spirit alter ego—the fabulous, gender-fluid, shape-shifting Miss Chief Eagle Testickle—as she travels through history in her signature sky-high heels, from the Mesozoic era to the colonial period to the present day.

The paintings show, with Monkman’s characteristic cheek and audacity, how Indigenous teachings have been passed down since the beginning of the cosmos, and how knowledge keepers—Indigenous artists, historians, professors and activists—kept those traditions alive during genocidal colonial settlement.

Monkman completed the 35 new works with the help of 20 staff, including 10 assistant painters and long-time collaborator Gisèle Gordon. To find out how Monkman does it, we went behind the scenes at the artist’s studio. 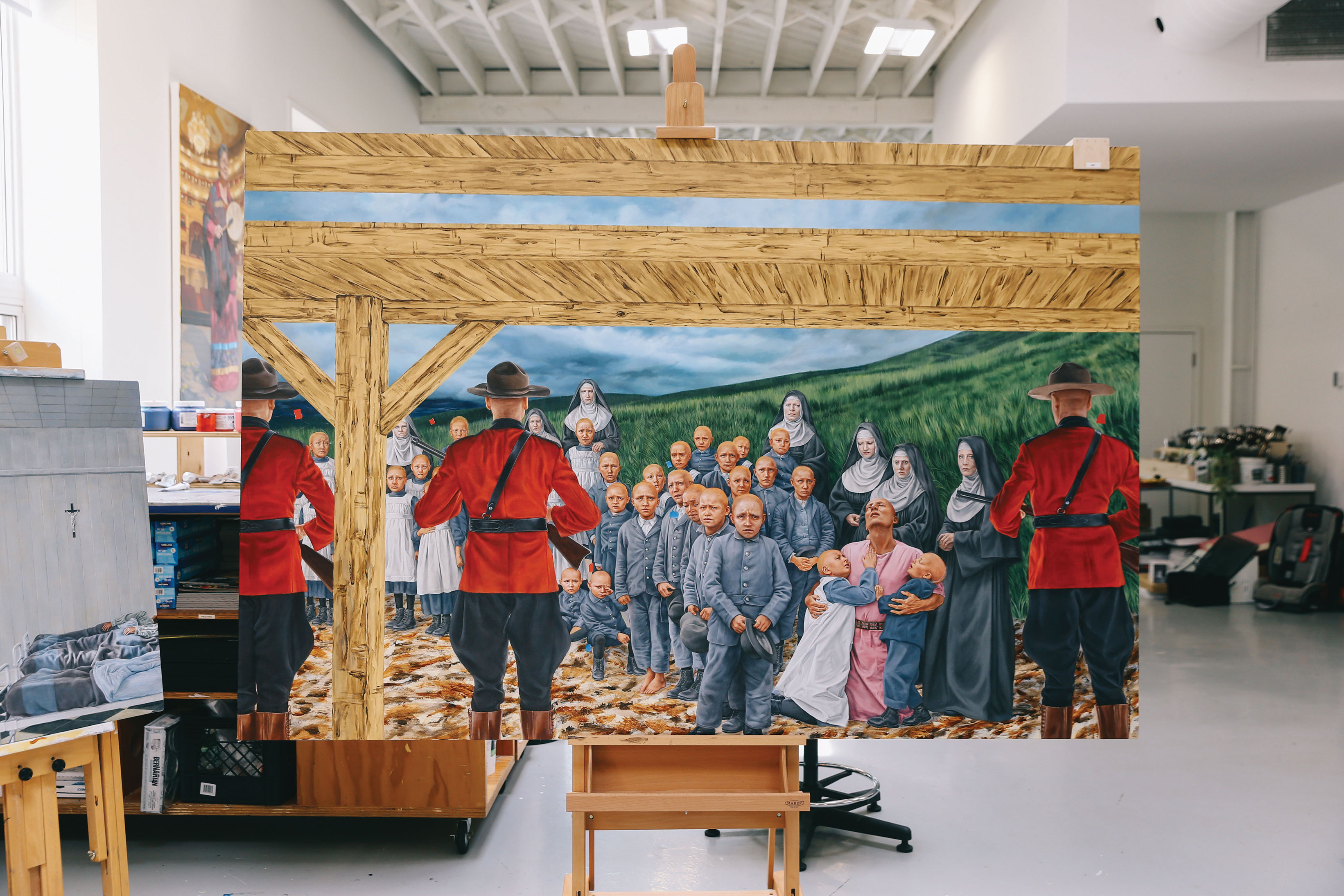 “The Going Away Song”

In 1885, eight Indigenous men were hanged in Battleford, Saskatchewan, after the North-West Resistance, a response to the Canadian government’s encroachment on Indigenous ways of life. Here, Monkman depicts students who were brought from a local residential school to watch the hangings. “It’s a way to discuss the interruption of knowledge,” says Monkman. He used photographs from residential schools as references, showing how the children were forced to cut their hair short and don drab uniforms. 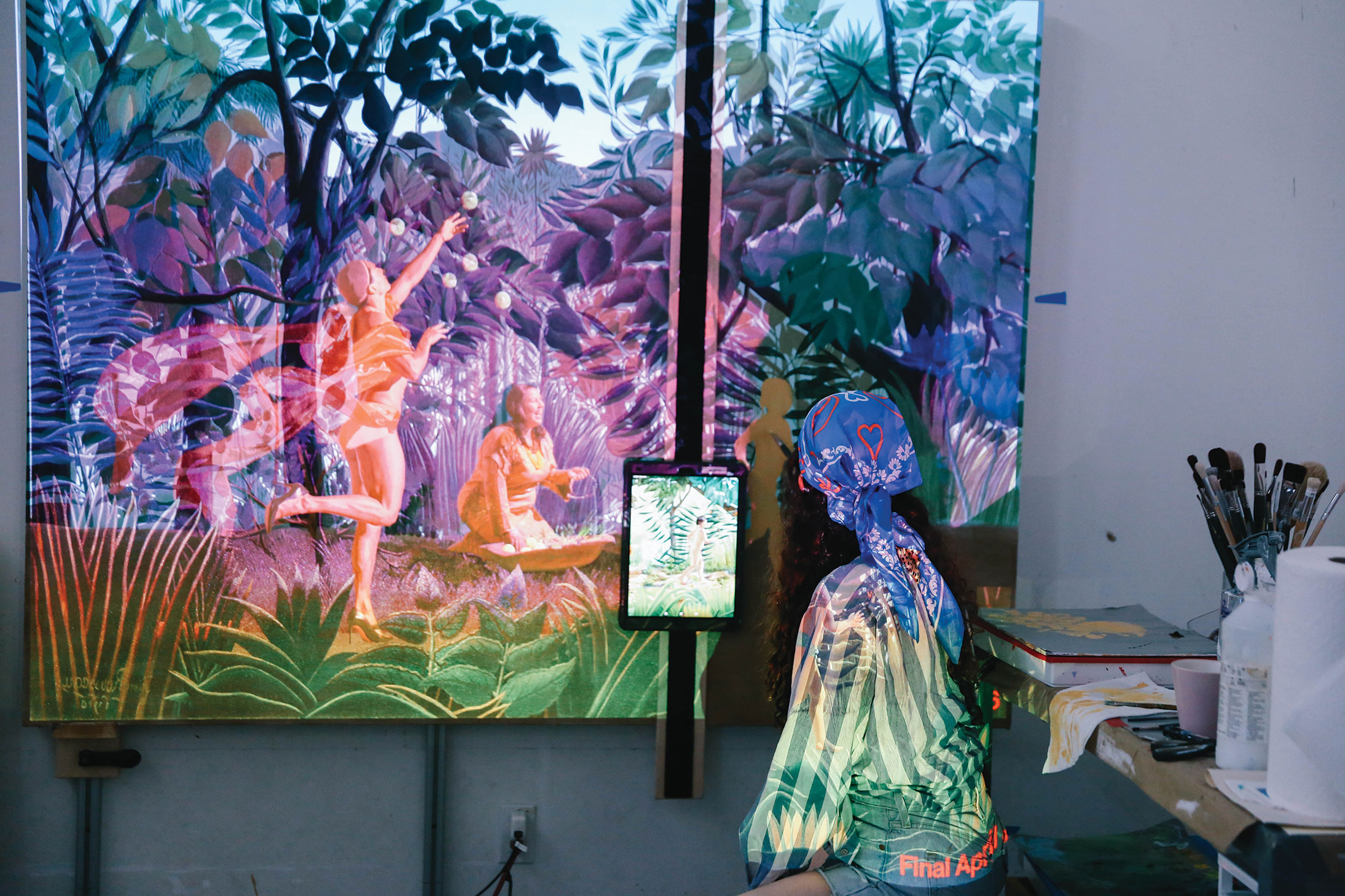 In the darkroom, one of Monkman’s assistants uses a projector to develop the underpainting of Grandmother Knew All of the Medicines. The assistant uses a small iPad to reference finer details. Monkman and his team create two or three smaller studies—perfecting the size, colour and proportion—before starting the final piece. 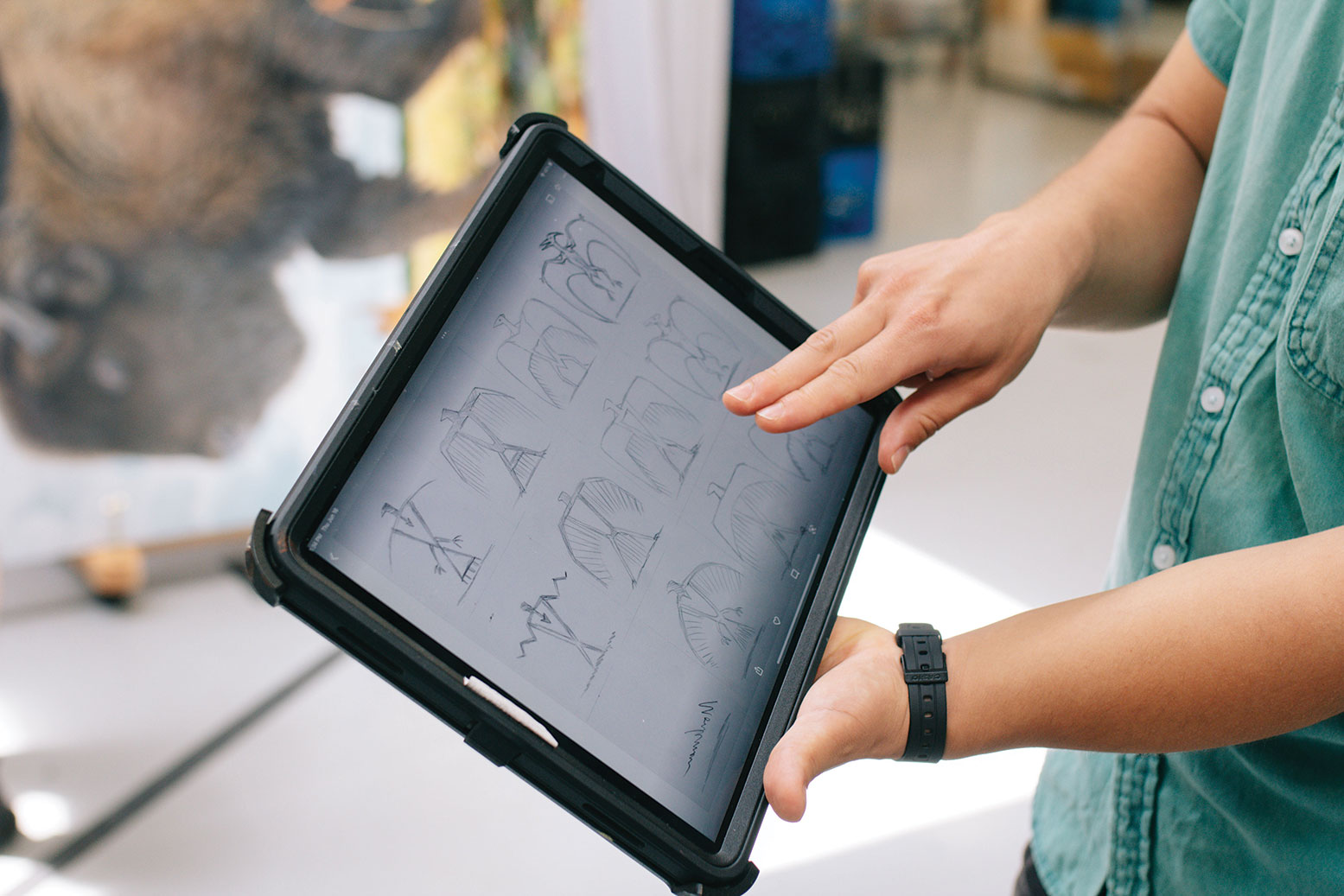 Monkman based these sketches on an image of a petroglyph from Lake Superior and morphed it into a thunder being. The series was then engraved into a copper plate for the exhibition using a process called chemical etching. 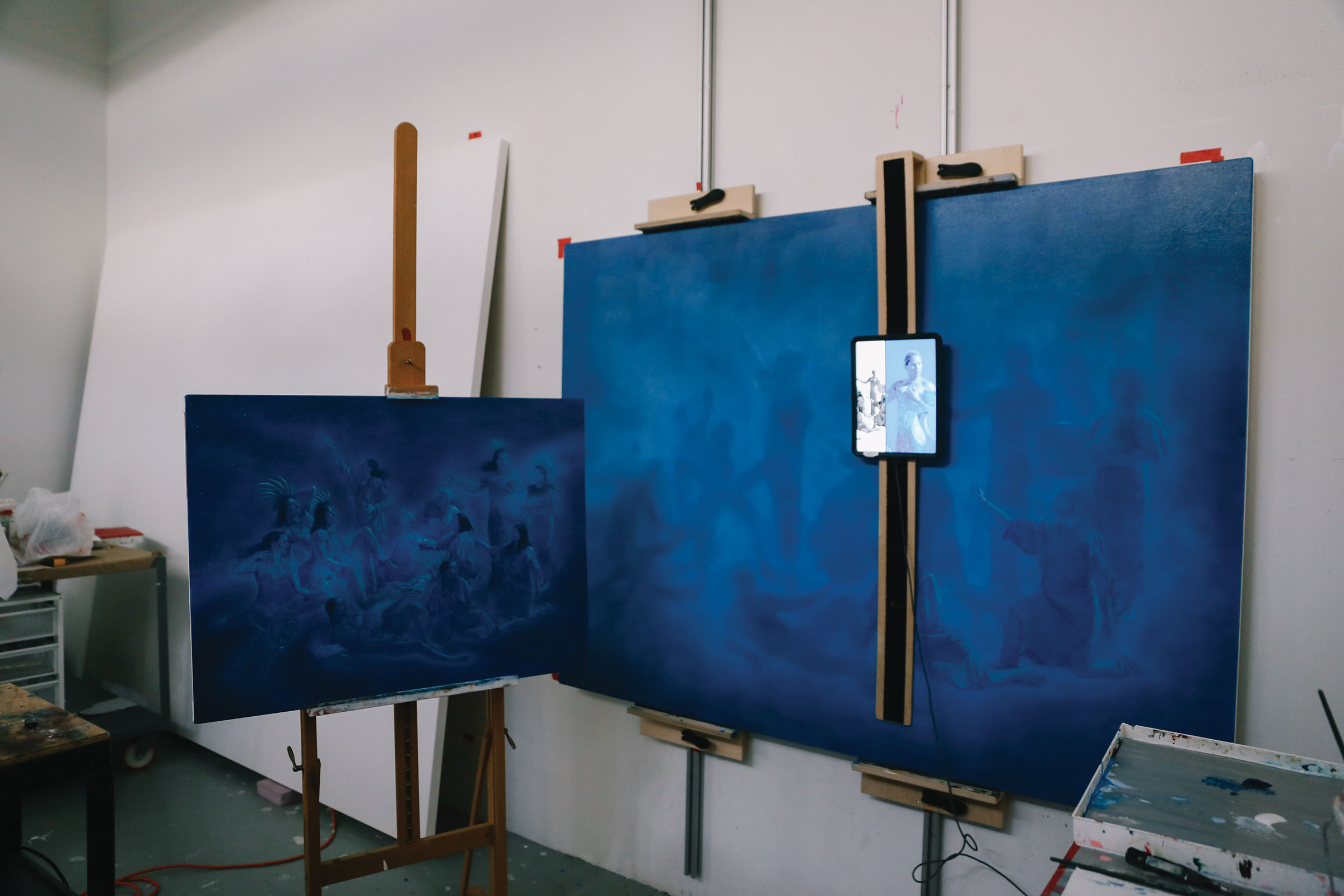 Early in the process, Monkman takes photographs of models, which his studio assistants later reference when they’re creating the work. Monkman’s studio sometimes designs and creates custom clothing for these shoots, as they did for this piece. 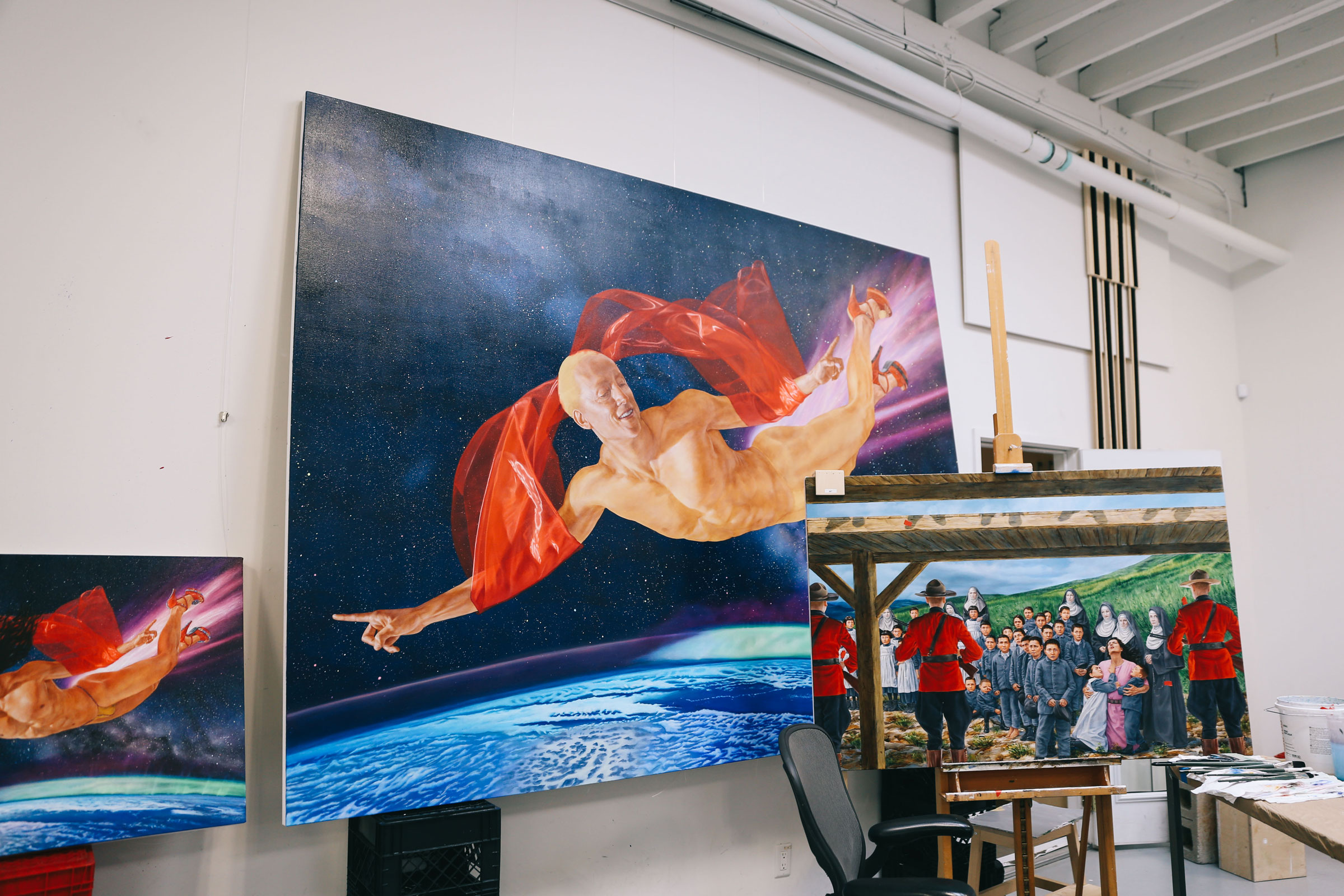 “We Are Made of Stardust”

Here’s one of the exhibition’s first paintings, which depicts Miss Chief Eagle Testickle at the beginning of time. Monkman wanted her to represent a knowledge of the stars. “She’s a legendary character, a constellation,” he says. “Her story begins at the dawn of life.” The painting was still in progress during our studio tour. As a result, Miss Chief doesn’t have any hair, which Monkman adds at the end of the process. 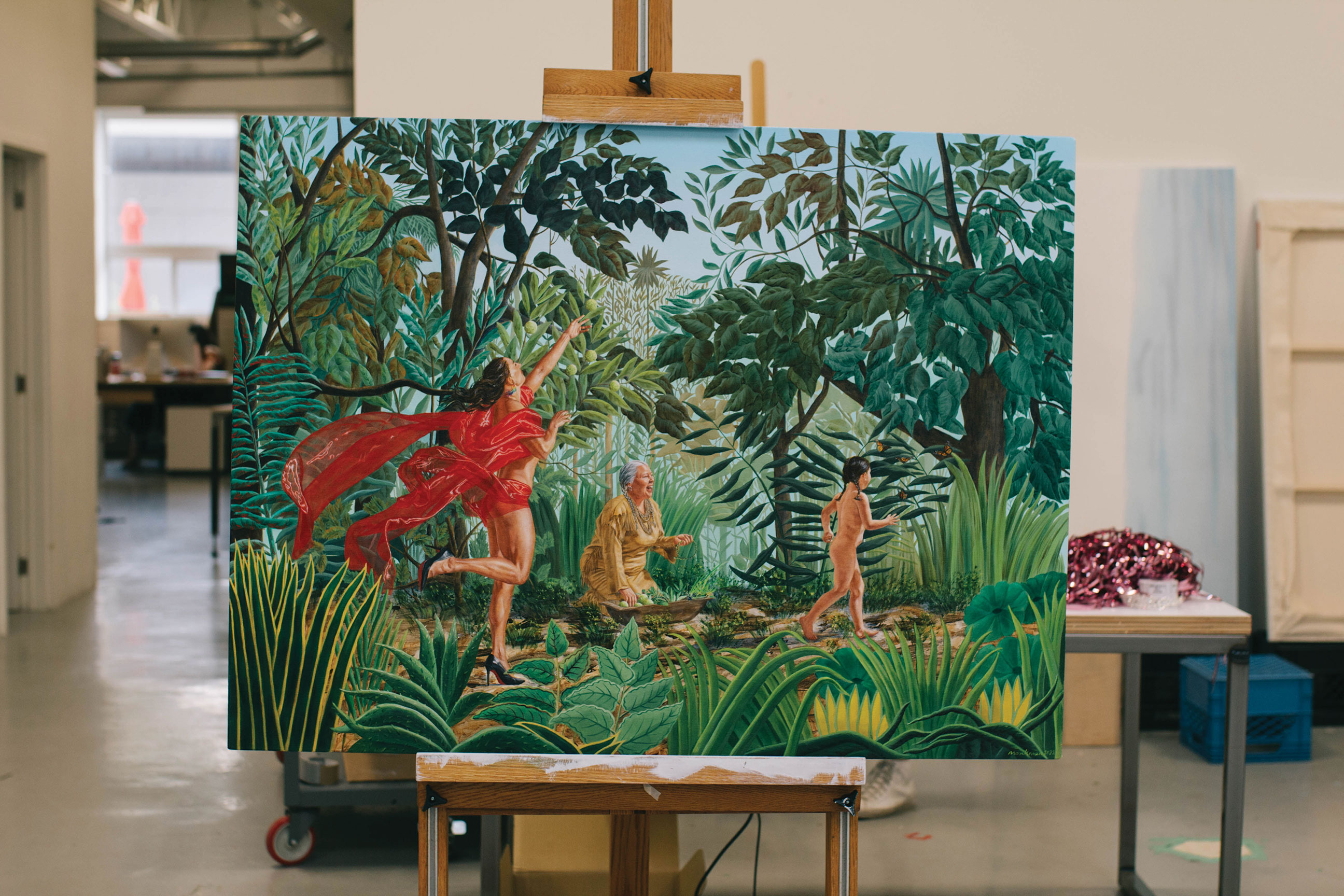 “Grandmother Knew All of the Medicines”

In this scene, Monkman focuses on multi-generational relationships. He wanted to emphasize how vital information transfers from one generation to the next. “The grandmother is passing down the knowledge of medicine plants,” he says. 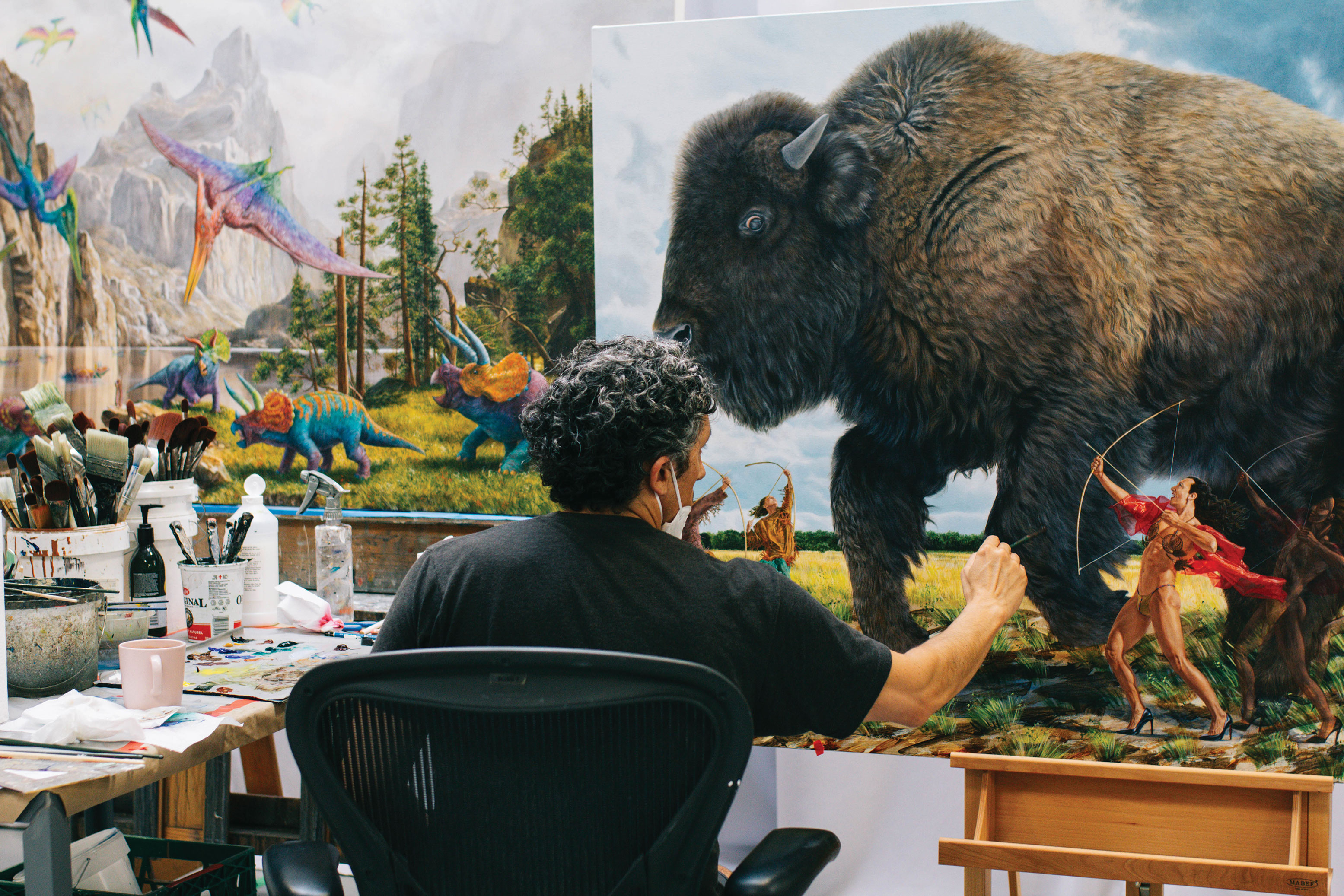 “Battle of Piyêsiwak and the Misipisiwak; Song of the Hunt”

Monkman developed a special brush to paint the hair of the bison. He’ll often cut into the edges of a brush to change the stroke and make hair look more dynamic, or he’ll use multiple brushes affixed to one another to create a larger surface area and more interesting texture. 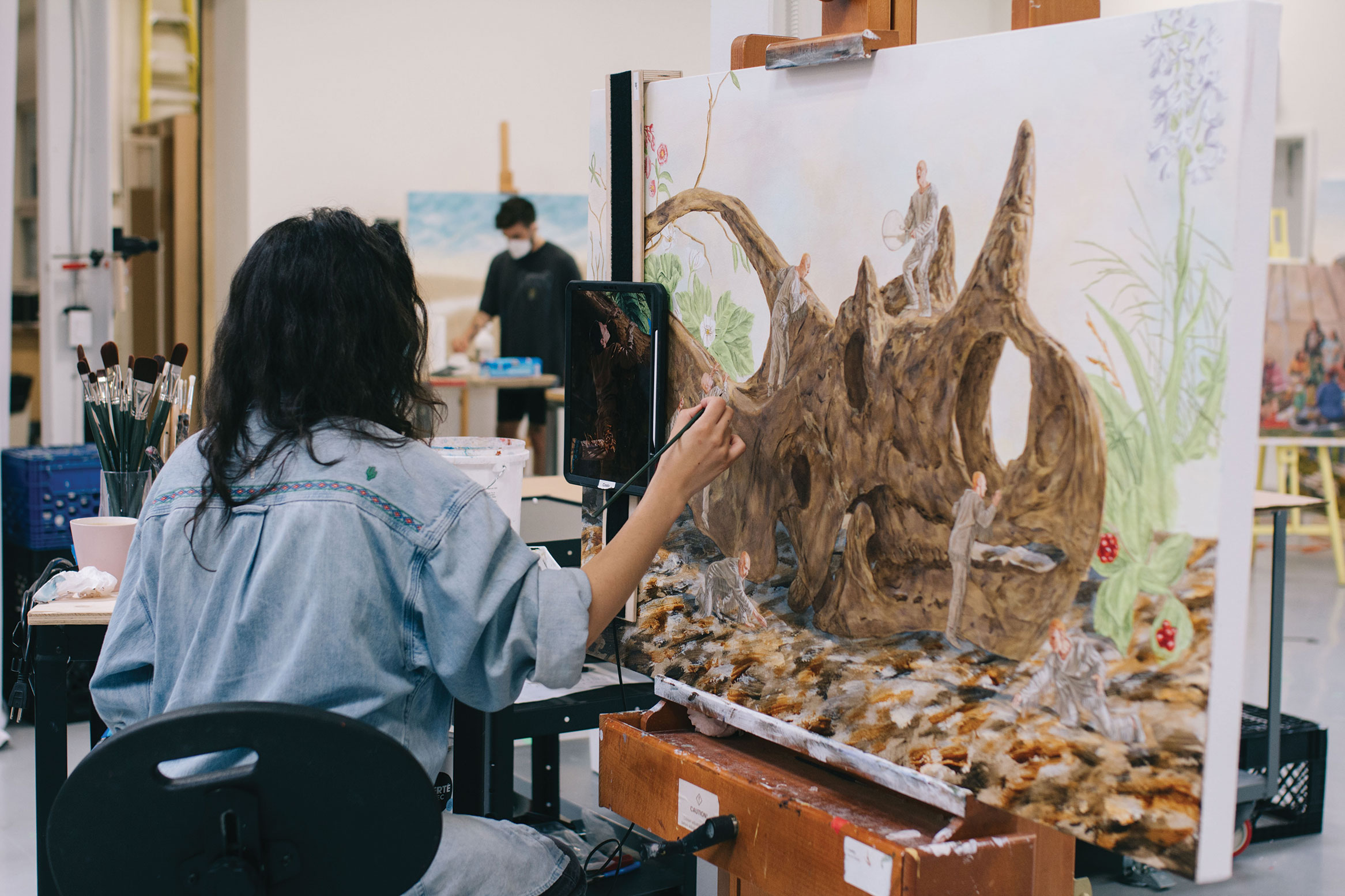 “The Rocks Hold Their Stories”

Here, the mîmîkwîsiwak inspect a horned dinosaur skull. Monkman wanted the legendary Cree figures to have tiny colourful particles emanating from their clothing—so he clad them in sparkly sequined garments. This painting will be displayed beside the horned dinosaur skull in the ROM’s collection. 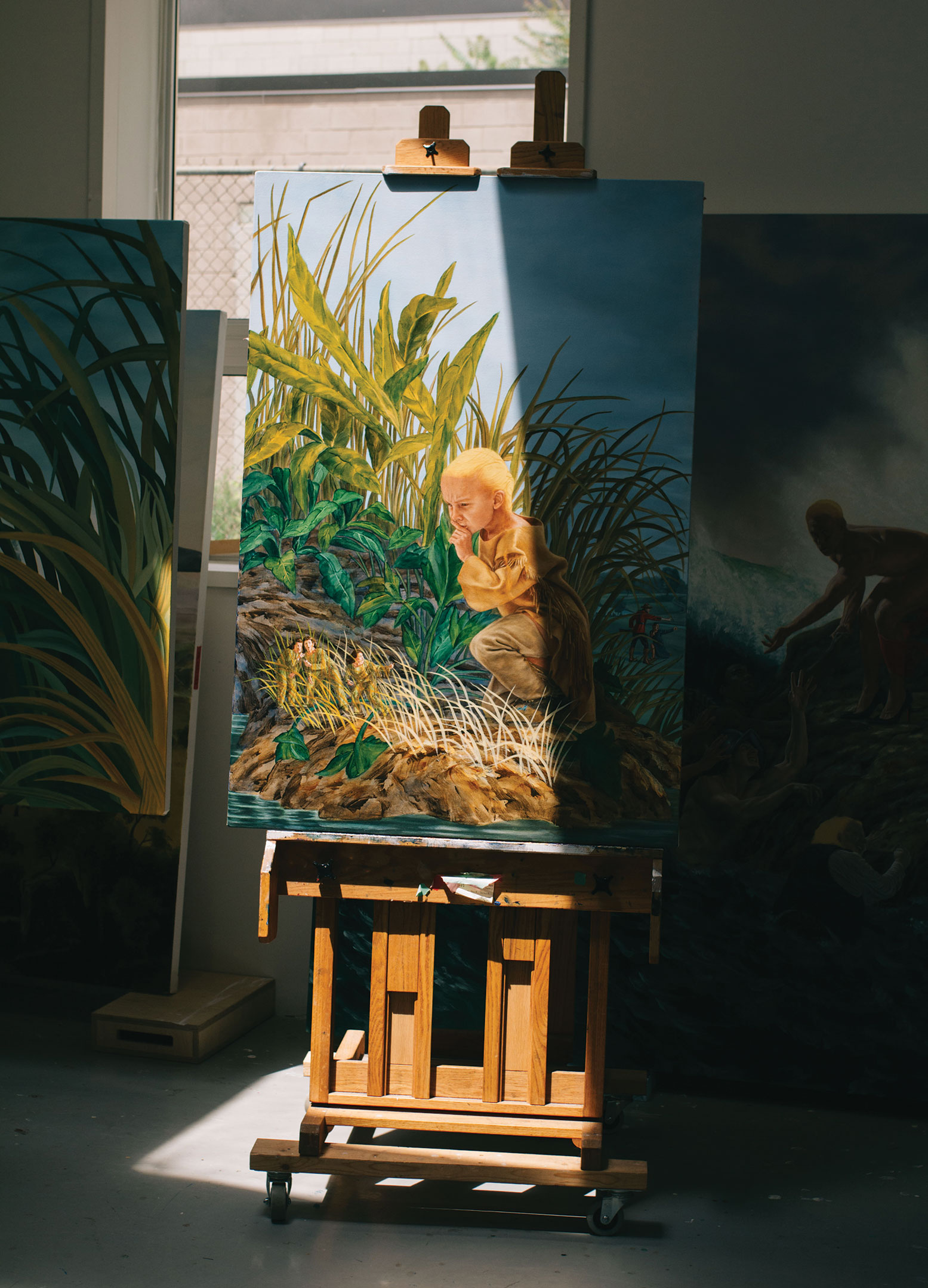 In this piece, a Cree child hides from the Mounties, who would have taken them to a residential school. They’re warning the the mîmîkwîsiwak to stay silent so they don’t accidentally reveal the child’s hiding place. “It’s about escaping the attempt to erase knowledge,” says Monkman. For all of his works, Monkman initially sketches how he wants the piece to look, even before photos of his models are taken. 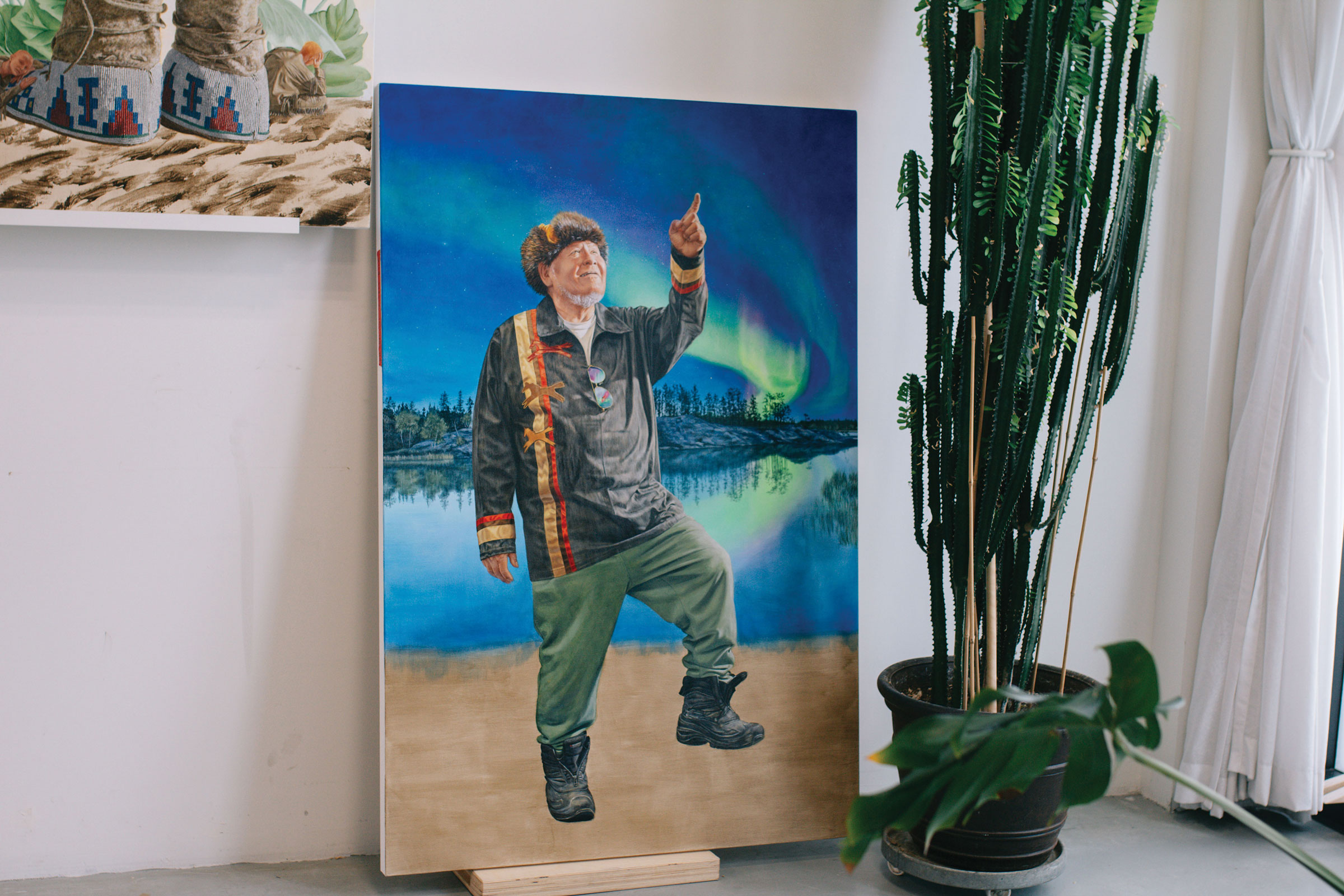 The last portrait in the exhibition features Wilfred Buck, a star stories expert and Cree astronomer, painted against a backdrop of the aurora borealis. He’s one of 11 individuals featured in this section of the exhibition. Looking closely, you can see the reflection of Miss Chief in his glasses, floating out in space at the inception of the universe, which harkens back to an earlier painting. “It references how Indigenous people think of our universe as cyclical,” says Monkman.