Last year, Krista Dalby, the artistic director of the Picton-based artist group the Department of Illumination, had an idea for another arts festival. She wanted to create a cheerful free event that would boost the spirits of local residents in the drearier part of winter. “February can be a depressing time in rural communities,” she says. She was inspired by the look of colourful ice fishing huts on frozen lakes, and she and her team constructed five of their own to be placed in Macaulay Heritage Park. They enlisted local artists to transform the interiors into immersive installations—this year’s theme is migration. It’s on until February 9. Here’s what you can expect to see.

Here’s the site from above. Macaulay Heritage Park is home to a 19th-century heritage home and the former Church of St. Mary Magdalene, now a museum. The huts are dissembled at the end of the festival and stored at Dalby’s farm: 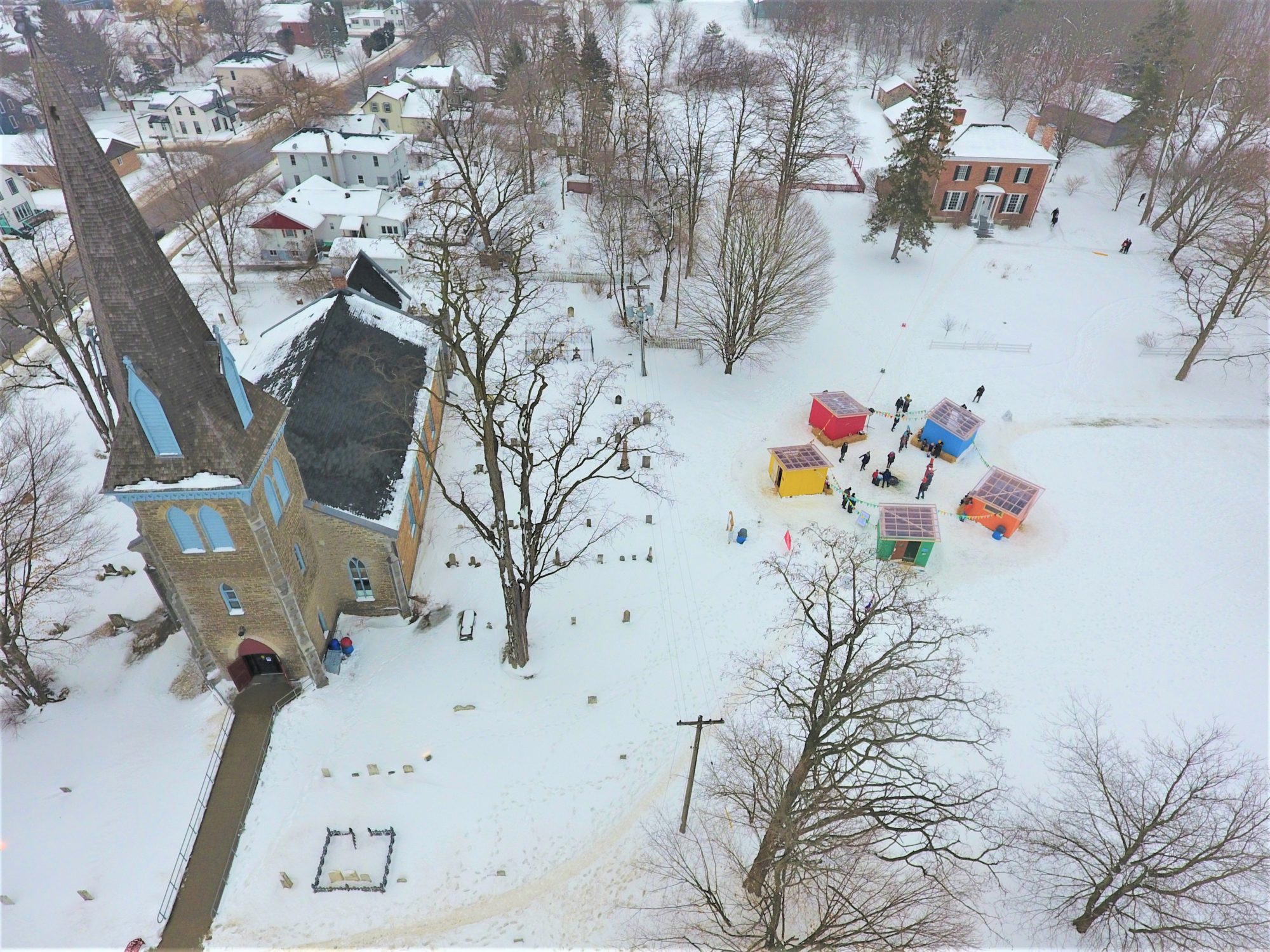 This hut was made by local artist and avid gardener Susanne Larner. She was inspired by the idea of a Victorian greenhouse believed to have occupied the grounds at one point, and she thought about the seeds—both literally and figuratively—colonizers brought with them. This hut features a mix of plants both real and imagined: there are hardy shrubs in pots next to whimsical specimens she crafted herself out of art supplies:

There’s also an audio component, where visitors can listen to a recording of a traditional First Nations tale, The Story of the Three Sisters:

Local curator and gallerist Hri Neil is interested in play as an art form. He covered the inside walls of his hut in metallic paint and created hundreds of magnets representing various elements in nature, which visitors can arrange as they wish:

In this hut, Andrea Piller, a ceramicist and arts educator, worked with local elementary schools on abstract map interpretations. She blew up three maps—one of Prince Edward County, one of Picton and another of the nearby Mohawk territory—and divided them into squares. Each student had to keep the roads and shorelines intact, but otherwise used collage and mixed media to interpret their area as they wished:

Last fall, the artists behind this hut, Nella Casson and her mother Marion Casson, went on a train trip across Canada to celebrate Marion’s 80th birthday. From that adventure, they created a 16-foot-long scrolling tapestry showing what they saw out the window:

There are also smaller embroidered works displayed in vintage suitcases in the same hut, as part of a community collaboration. In January, a group of stitchers got together twice a week to create replicas of items you’d take with you on a journey:

Artists Genna Kusch and Chrissy Poitras enlisted a high school sociology class to help research migration. For their hut, they played with the symbolism of roots, including tree roots, family roots and migration routes. The inside of the hut is painted entirely black, with hidden flaps that fold down to reveal intricate 3-D designs:

In addition to exploring the various worlds created inside the huts, visitors can eat frozen maple syrup, sit in on workshops and participate in daily campfire dances wearing giant fox heads: