Winter surfing in Lake Ontario is brutal, painful and freezing. I can’t get enough

Winter surfing in Lake Ontario is brutal, painful and freezing. I can’t get enough 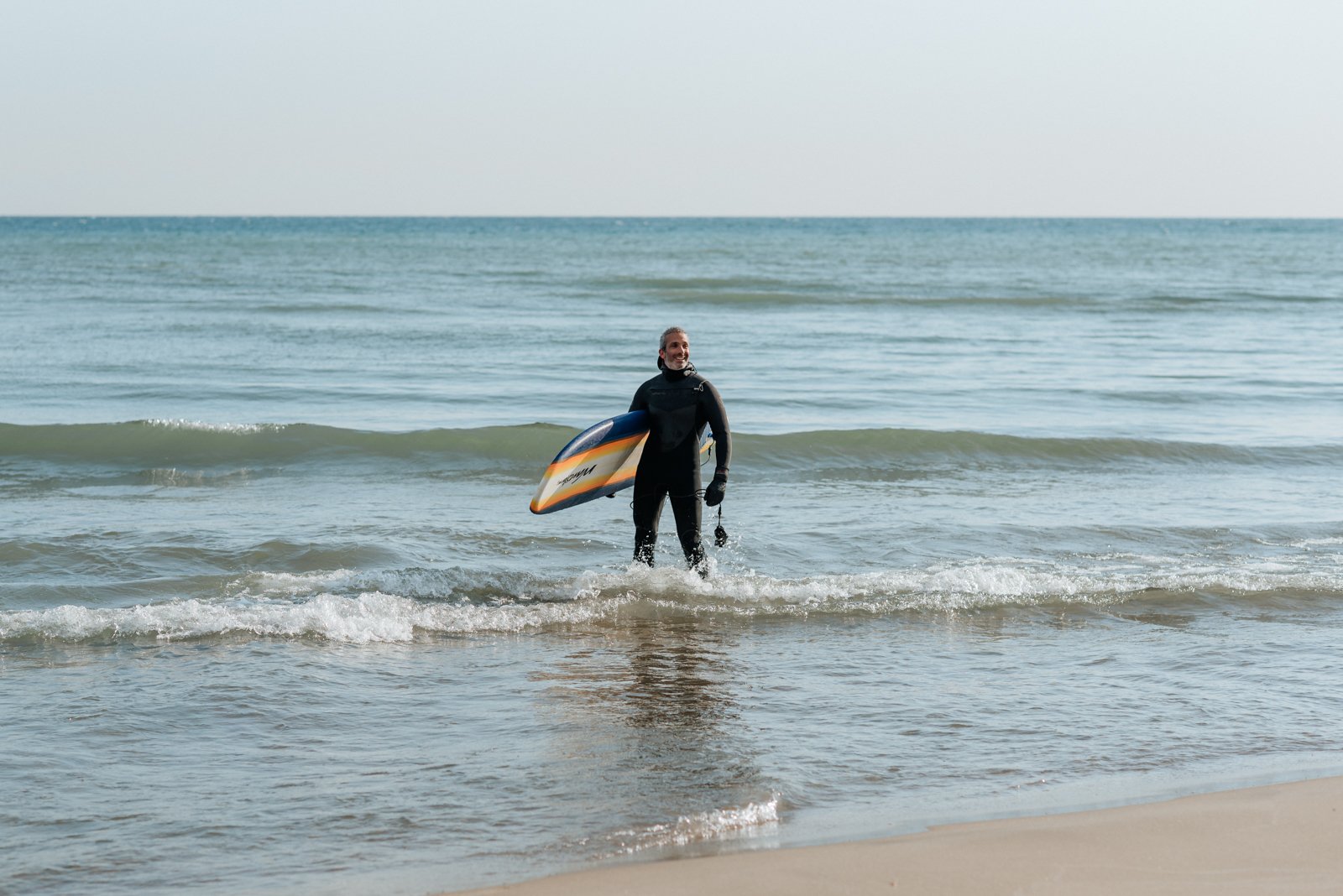 It was late November, and Lake Ontario was raging. Angry waves burst onto the rocks into huge plumes of spray, while sand whipped across the Woodbine Beach parking lot. Gusts at 100 kilometres per hour periodically screamed in from the water, stripping trees of their remaining leaves in seconds, as dog walkers crouched on the sand, clutching their pandemic pups so they wouldn’t blow away.

It was a mess. A beautiful sloppy mess that I eyed from the open hatch of my car, where I sat half-naked, fighting my body into a wetsuit, along with half a dozen other surfers racing to get dressed in nearby spots. “Are you seriously going out in this?” asked a man, from the safety of his front seat. “Yup!” I shouted. “Wow,” he said. “I can’t decide if that’s brilliant or crazy.”

Like so much about this year, surfing in Toronto makes no sense. It is an activity defined by disappointment and discomfort, freezing water and horrible weather, garbage waves and garbage floating in the waves. And yet, during this fall and winter of rising case counts, renewed lockdowns, and the endless tides of stress that wash in daily, lake surfing has become my greatest joy. I obsessively study wind and wave reports, trying to predict the window when something rideable might break upon our shores. I research the best wetsuit mittens to take me deeper into the winter, watch YouTube videos about how to build a boot-drying contraption, and scroll through the Instagram feeds of other lake surfers. I stream surf movies late into the night, and hit the bed dreaming of waves.

Like most Toronto surfers, I began in the ocean, and have caught waves as far afield as France, Mexico, California and Nova Scotia. But Toronto is 1,000 kilometres from the sea, and until this fall, I resigned myself to the belief that surfing only happened elsewhere. Then, a few years ago, I got into stand-up paddle-boarding. At first, it was something I did during flat summer days with my friend Josh Newman. We’d get out, paddle around the Island or the Beaches, catch some rays and take a dip. But toward the end of August, the winds would pick up and there were often little waves. Surfing the paddleboards was always comically unwieldy, like taking a school bus off-roading, but occasionally I’d experience that magic moment of suspended animation, as the lake simultaneously reared up in front of my board and collapsed on itself. 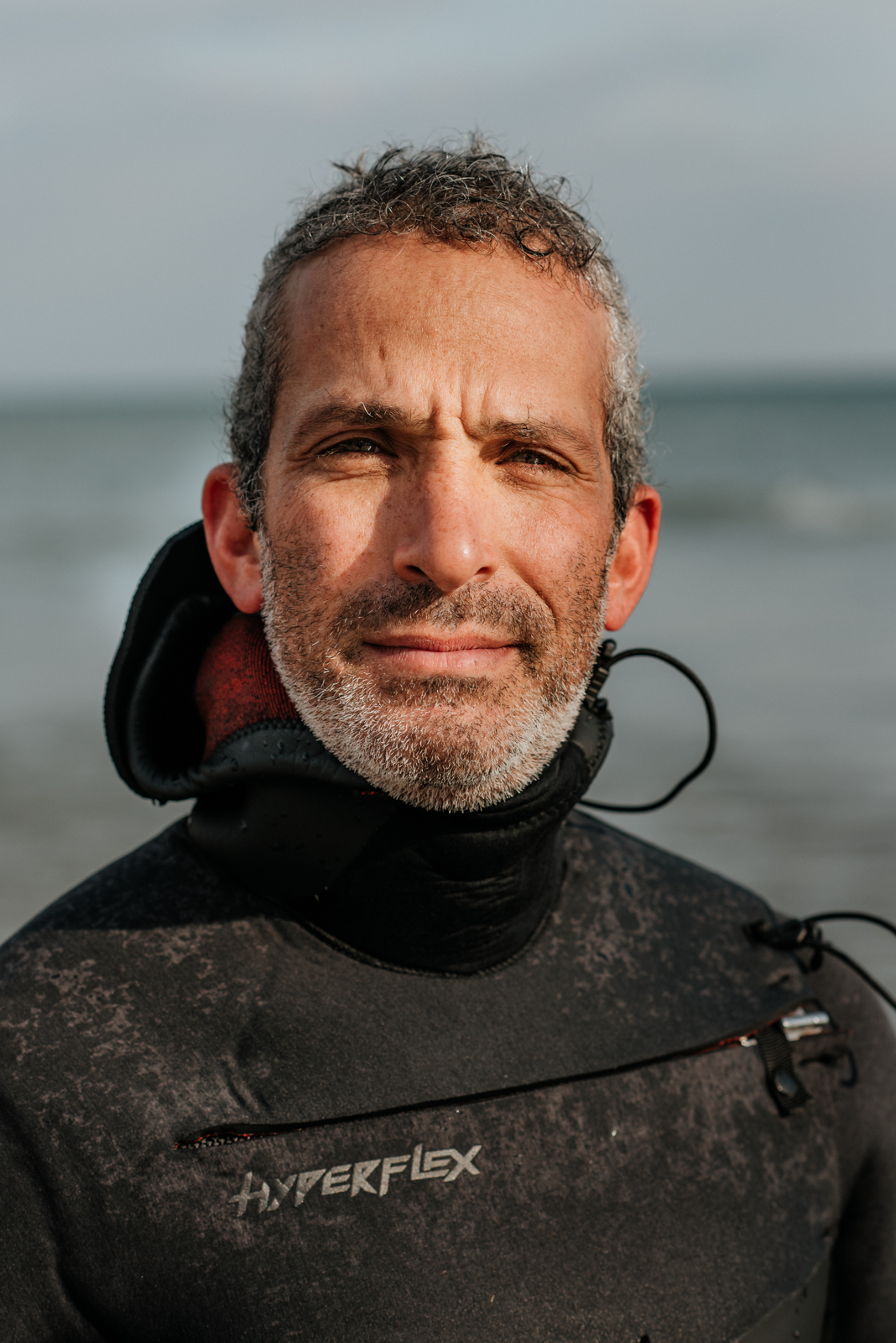 This spring, I bought an inexpensive foam surfboard. I had read stories about people surfing the Great Lakes for years, and had even shared the water with them from time to time on my paddleboard. They tended to cluster around Woodbine Beach or the various coves by the Scarborough Bluffs, but were known to travel as far as Lake Huron or Erie to chase waves. I got out a couple times in the summer, splashing around in shorts, but things really got started when fall began. I was driving down Bathurst one windy day in early October, when I spotted a pick-up truck in front of me with the unmistakable fin of a longboard sticking out the back. When I pulled up next to the truck at a red light, I realized it was my friend Daniel. He shouted that he was heading down to the Bluffs, and we made a plan to meet there in two hours before the light turned green.

When I arrived Dan wasn’t there, but I spotted a car with surfing stickers in the lot, and found someone changing out of their wetsuit nearby. They told me to head under the sandstone cliffs toward the east end of the park, and after a barefoot walk on a rocky trail, and a leap over a stormwater drain that reeked of everything the rain had just washed downhill, I got to the beach, where two other surfers were already in the water. The wind was howling in my face, spraying pinpricks of rain so strong I had to shut my eyes, and the waves were breaking all over the place, but as I paddled into my first wave, wobbled to my feet and stood for the first time in my hometown for a few precious seconds, I was overcome with a feeling as ecstatic as the best ocean wave I have ever caught (Engenhoca, Brazil, 2005).

Unlike ocean waves, which travel thousands of kilometres from their origins to break in smooth glassy sets on distant beaches, lake surfing is driven by wind, and the most wind arrives with bad weather. It is surfing at its most tempestuous and fickle, a delicate balance between a flat disappointment and a cacophonous, unrideable soup of white water and dragging rip tides. Rain and sleet and snow are necessary accoutrements. Sunshine is a rare treat. After Labour Day, the water temperature rapidly plummets, presenting a daunting choice: shell out $700 for a proper winter wetsuit (plus boots and gloves), or hibernate for eight months.

Good swells might last an hour or two before the wind shifts and kills the fun. Sometimes I’ll arrive at the Bluffs, having driven across the city, only to hear that I missed the window. Other times, I’ll fight the lake for two hours, only to leave in frustration without a single wave, and see later on Instagram that the waves cleaned up and a rainbow came out. All that rain washes a city’s worth of detritus into the water, by the way. I have plucked discarded condoms and tampons from my board, dodged floating car tires and huge logs, and plunged my face into water that smelled just like the bypassed sewage system that dumped into it. When I recently described lake surfing to a friend who lives in California, he said, “That sounds like the worst possible surfing imaginable. Why even bother?”

All fall long, this question is what I ask myself whenever I doubt the wisdom of hitting the water. Most of the time, lake surfing is a perfectly idiotic, Sisyphean task. “You surf?” friends ask in pitiful amazement. “On…the…lake?” 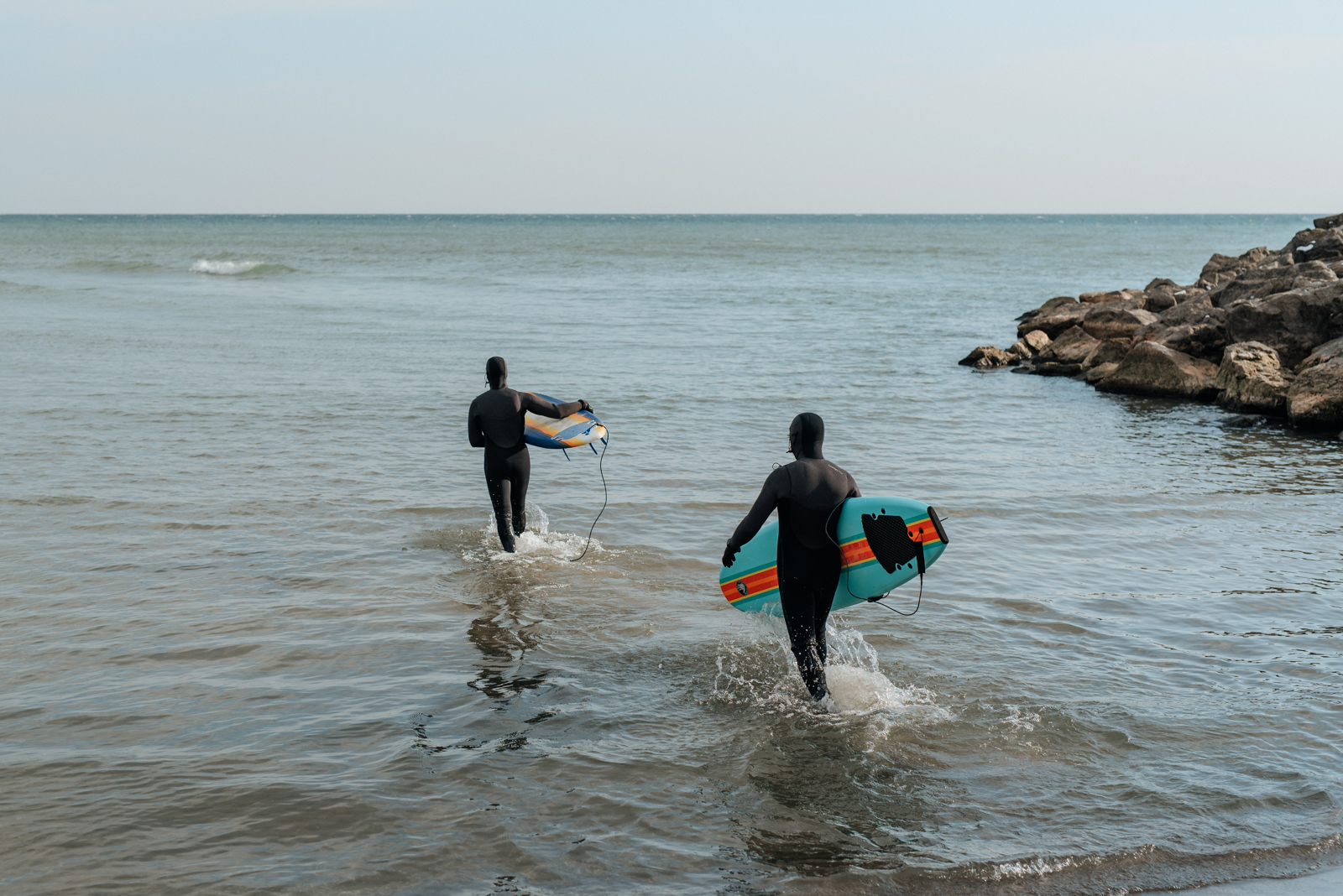 And yet there’s something about lake surfing that makes perfect sense to me right now. All of us need something to escape to, a destination for our restless energy that gets us through this pandemic…whether it’s wine, weed or The Mandalorian. Early on, I realized that more screen time was the last thing I needed. I turned down Zoom drinks and cut back on the streaming. You couldn’t pay me to ride on a stationary bike in front of a tablet. Surfing gets me out of the house and into another world. On the water, bobbing among the waves, the pandemic disappears. I don’t worry about masks or R values or the other things that have imprisoned our minds these past 10 months. I just look out at the horizon, hum some tune in my head, and try to see the next wave.

Lake surfing is also remarkably social. I frequently go surfing with Josh, whose wife calls him my “water husband.” In other places I’ve surfed, the competition for waves can be fierce and animosity is rampant, but when you chose to go surfing on a lake, especially in winter, you join a society of like-minded fools. On busy weekends, as many as two dozen surfers will paddle out at Ashbridges Bay, and a beautiful camaraderie blossoms. We chat about gear and wind forecasts in the parking lot, as we shamelessly disrobe in front of each other. We hoot and holler when someone catches a good wave, and apologize in a most Canadian way if we happen to accidentally drop in on another surfer. I’ve met lawyers, teachers, carpenters and computer programmers out there, men and women, young and old…but really, no one cares who you are. You’re just one more body clad head to toe in black neoprene, bobbing like a seal in the same shared sense of joyful purpose.

There are days when I have to convince myself to get out. When the rain is whipping the windows before I wake up, and my middle-aged back hurts just getting out of bed. When the forecast looks flat, and the drive is going to take an hour, and I wonder whether I should just stay home and work on something that would establish me as a productive member of society. But then I remember that I have all week to sit at the computer, and a tiny chance of waves is still a chance. I’ll load up the car, Speedo on under my sweatpants, pour a thermos of tea, and head out across the city, blaring Brazilian music, even though the rain has now turned to sleet. I will get to the parking lot and slide into the wetsuit with plastic bags on my feet (a great trick I learned from YouTube). Then I’ll grab my board and walk to the water.

Some days, during the week, I can even find myself completely alone on the water. I will paddle out, sit on my board and look up at the grey stone of the Bluffs, then close my eyes for a second, take a deep breath and feel truly free for the first time all week. I’ll look to the west as a few ripples roll toward me, deepening into shadowy troughs. Kicking with my legs, I’ll pivot my board, point the nose toward the shore, lie on my chest to paddle a few furious strokes, and with any luck, get to glide along that wave’s face for a moment that feels like an eternity, in whatever counts as Zen in this relentless fucking year.

Crazy? I’d be crazy not to. 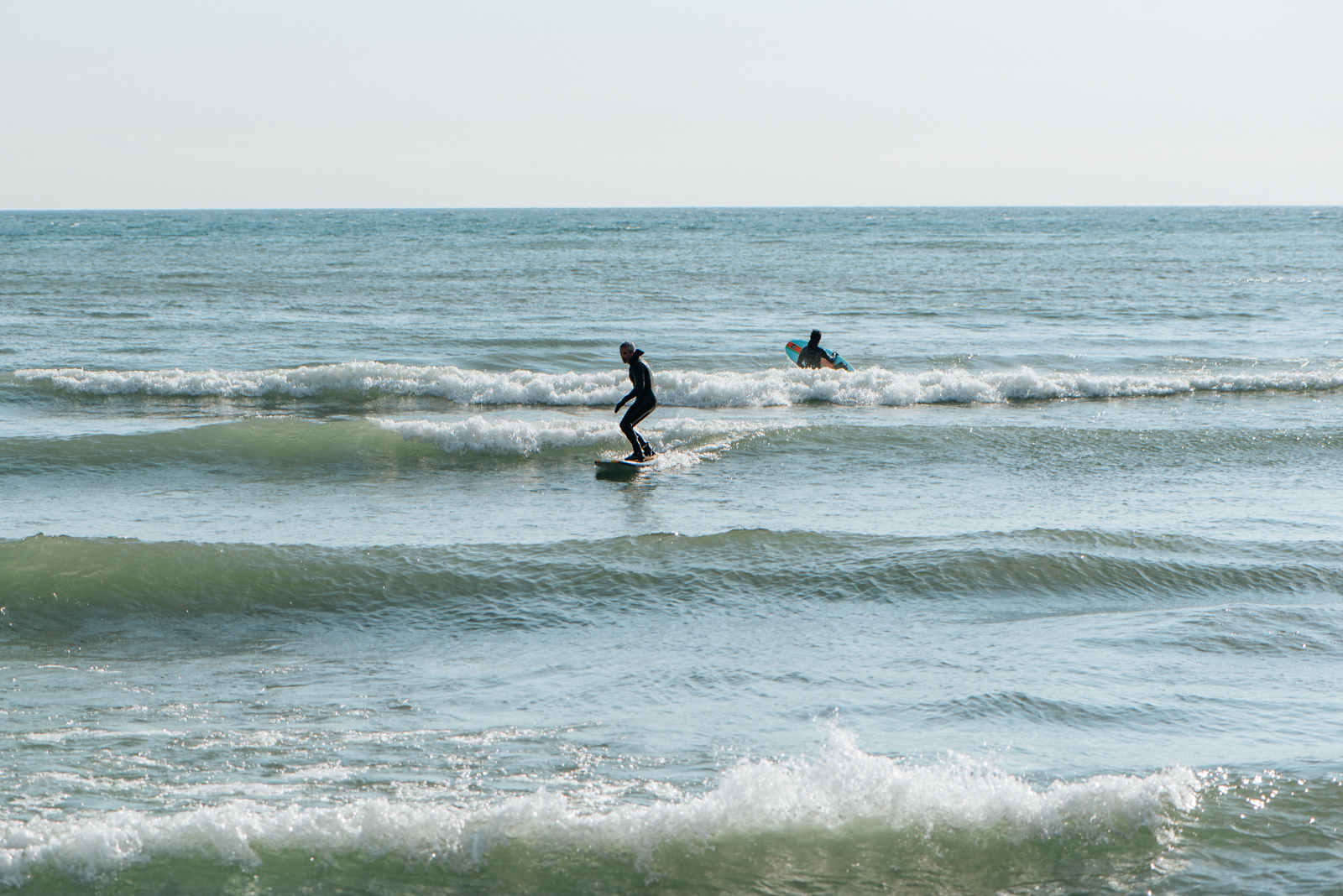