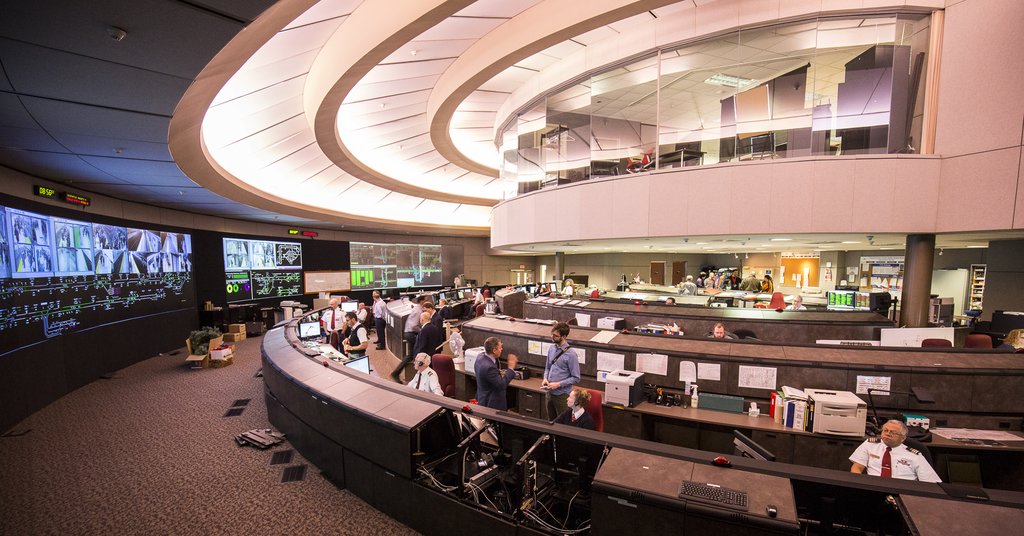 There are a number of reasons your morning subway commute is such an unpredictable mess. Mechanical issues, like this morning’s electrical fire at Main Station, often throw the subway off schedule, forcing the TTC’s engineers to improvise quick rush-hour fixes. But far more common are emergency alarms, which are triggered whenever a passenger presses the yellow strip inside a subway car. In 2015, there were 2,674 alarms—an average of more than seven a day, many of them related to minor medical issues that didn’t genuinely warrant emergency treatment. Talk to TTC staff about this and you instantly sense their exasperation. “If people feel unwell, it would help us if they get off the train and ask for help,” said Mike Palmer, the TTC’s subway chief. “Just get off and sit on the platform for five minutes.”

The nerve centre in the fight against subway delays is the TTC’s Transit Control room, located in a high-tech office in a location the agency doesn’t like to disclose for security reasons. There, a team of employees spend 24 hours a day, seven days a week ensuring one of Toronto’s most critical pieces of infrastructure runs safely and, ideally, on time. Here, step-by-step, is what happens at Transit Control after a rider lunges for the strip.

On this particular morning, the first person in Transit Control who hears about a passenger alarm is Kelly Gray, who manages communications to and from subway trains. The driver of the train alerts Gray over a radio link. She punches the information into her computer, which triggers a goofy “uh-oh” sound effect that the entire Transit Control staff can hear. (There are other sounds for other types of emergencies, like ominous beeping for a power failure.) Once Gray has logged the alarm, all action taken by TTC staff is recorded in her electronic file.

Once Gray has logged the alarm, Marc Guenette at the 911 desk coordinates the emergency response. “You’re listening to the room at all times,” he said. “If there’s an emergency alarm pulled on a train, it’s up to me to react.”

Guenette has a direct line to Toronto police, fire, and ambulance services. (On a typical day, the TTC calls emergency services about 60 times for various reasons.) While he’s on the phone, another Transit Control employee generates the automated “robo-voice” messages that play over the station public address system, explaining the nature of the delay to riders. The same person issues the email, text message, Twitter, and e-alerts riders live in fear of reading before boarding the subway.

Gary Gale and Milan Kobescak (pictured) are responsible for keeping the subway running during an emergency (they manage the western and eastern parts of the Bloor-Danforth line, respectively). Either one of them can change the colours of signals in the subway tunnels and manipulate track switches.

Because a push of the yellow strip automatically halts a train at the next station, all trains behind that one are forced to stop, too. At the height of rush hour, even a small delay has the potential to overcrowd platforms and create conditions for even more emergency alarms. “If you have an emergency alarm with a sick customer, it will back up like crazy really quickly because there are more trains than stations,” said Michael Hazlett, the manager of the Transit Control Centre. “You’ll have trains trapped in tunnels, then people get claustrophobic and they start to panic a bit, and then you have reaction emergency alarms. A little delay can snowball really quickly.”

In these situations, Gale and Kobescak will begin adjusting signals and switches in an effort to minimize the trouble. The map above shows the real-time locations of trains and colours of signals in all of Toronto’s subway tunnels. (Red lines represent trains, and white lines indicate sections of track that are managed by automatic signals.)

The trouble is compounded by the fact that Gale and Kobescak can’t turn trains back wherever they want: an x-shaped piece of track (known as a “crossover”) is required, and the nearest one might be some distance away. That’s why passenger alarms often shut down entire sections of a subway line, rather than just a single station.

After a lengthy delay, if trains are clumped together or spaced much too far apart, Gale and Kobescak might get train operators to use those crossovers to perform short turns, which involve kicking out passengers and turning a train around to fill a gap in the opposite direction.

Even though subway service appears to return to normal in the minutes after a delay, the line may still be in a state of disarray behind the scenes. Drivers and door operators need to take scheduled breaks, and short turns can interfere with the choreography required to make that happen. It’s up to Transit Control staff to resolve those situations, too.