Toronto’s best-dressed dogs this Halloween, from Bob Ross paintings to a gnome

Toronto’s best-dressed dogs this Halloween, from Bob Ross paintings to a gnome

Because you can never have too many pooches in costumes 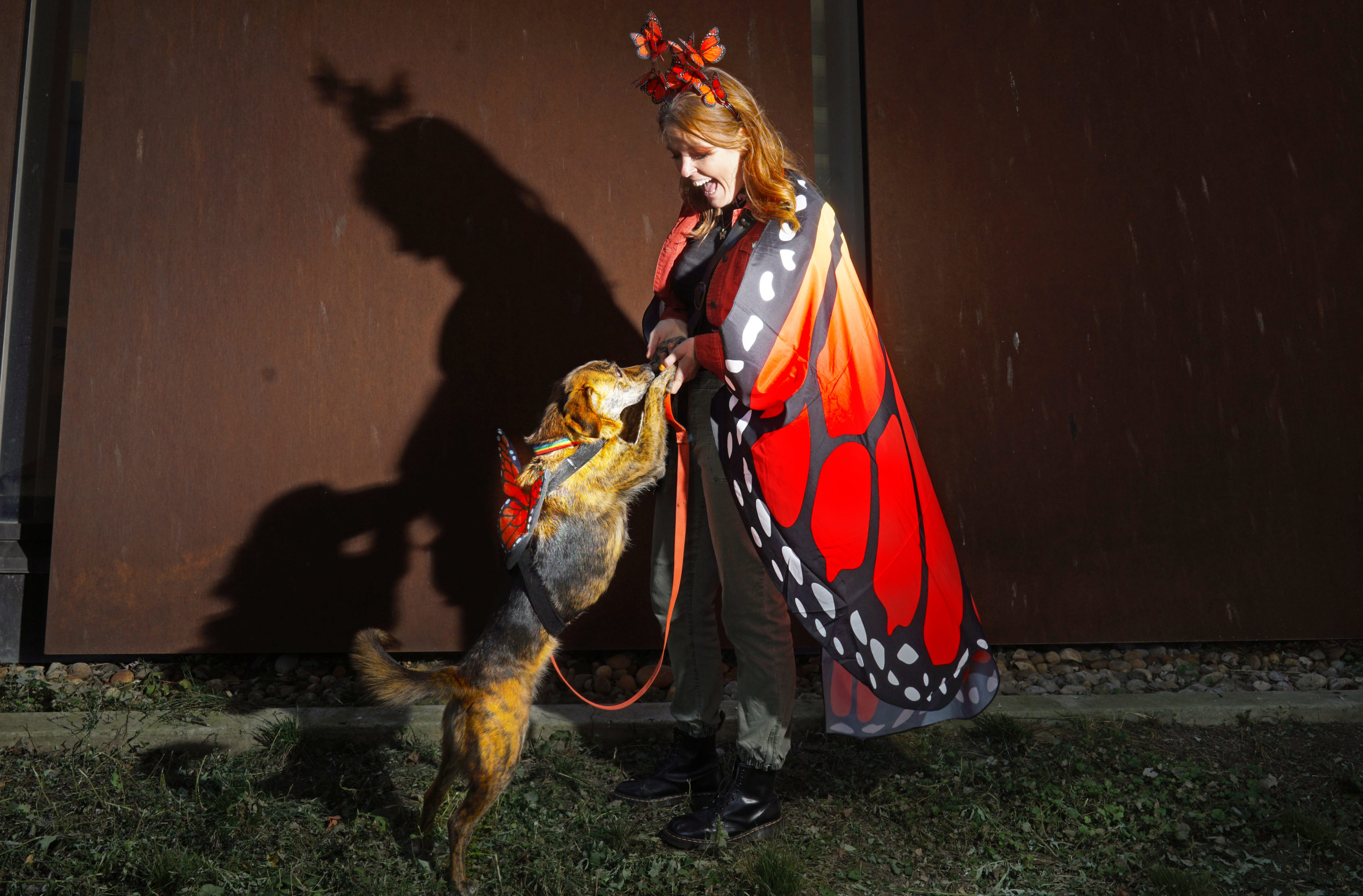 This weekend, The Bentway hosted a display of spooky season’s most delightful phenomenon: dogs in costumes. At Howl’oween, four-legged Torontonians and their owners strutted in a pup parade and competed in a costume contest presided over by local dog influencer and fashion model Iggy Joey. We played pup-arazzi for the day and spoke with the contestants serving the best looks. 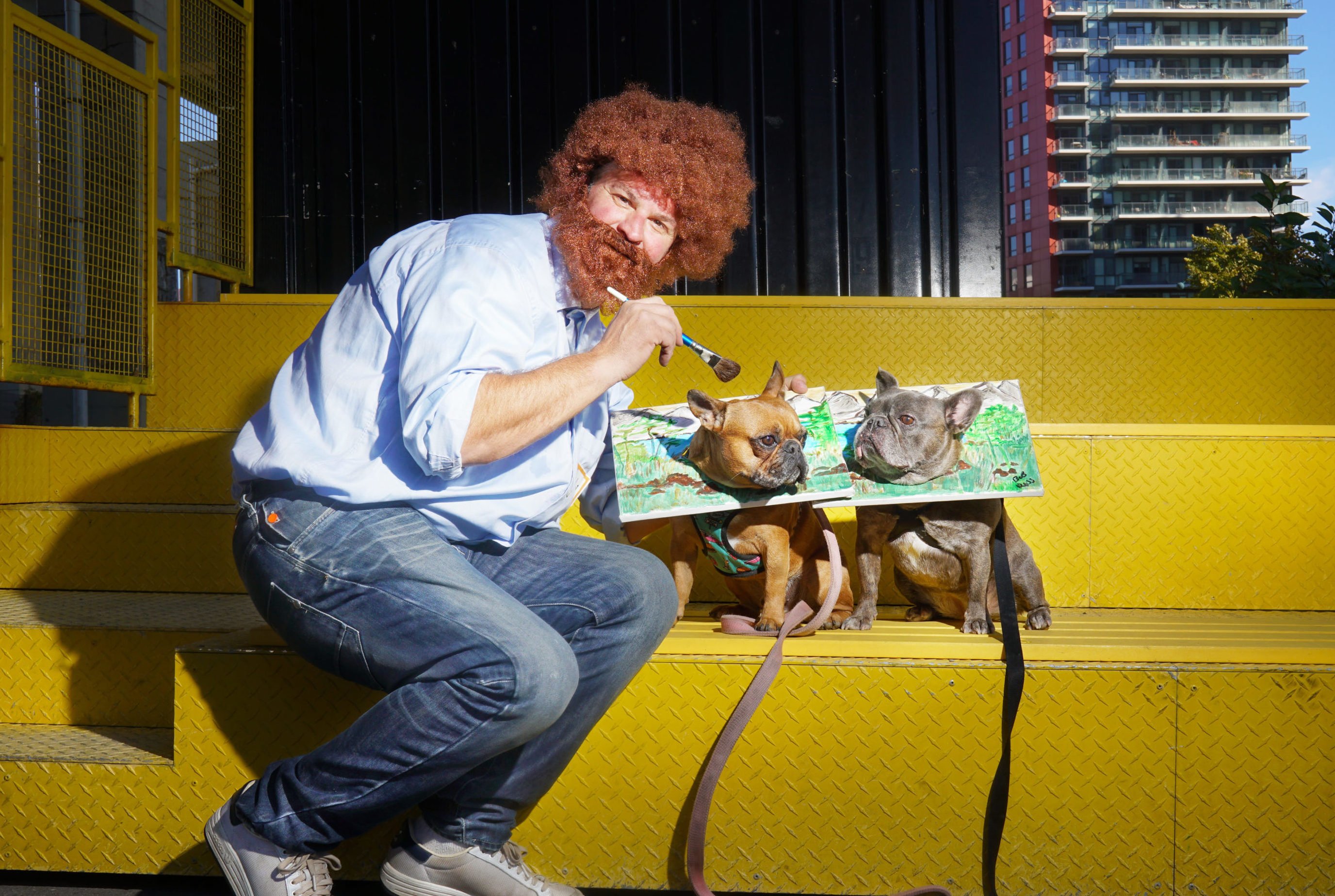 Bob Ross and his paintings

“I love Halloween. George and Violet are my children—I don’t have any other kids to dress up. Growing up, I used to watch Bob Ross, and I always thought it was funny that he would come up with all these paintings. So why not put a Frenchie in a painting? For 95 per cent of the day, Frenchies are chill and relaxed, just like Bob Ross. For that other 5 per cent, you get some energy and zoomies. We actually just came from a Frenchie meetup. The dogs had different costumes for that event: they were dressed as Chucky and the Bride of Chucky.” 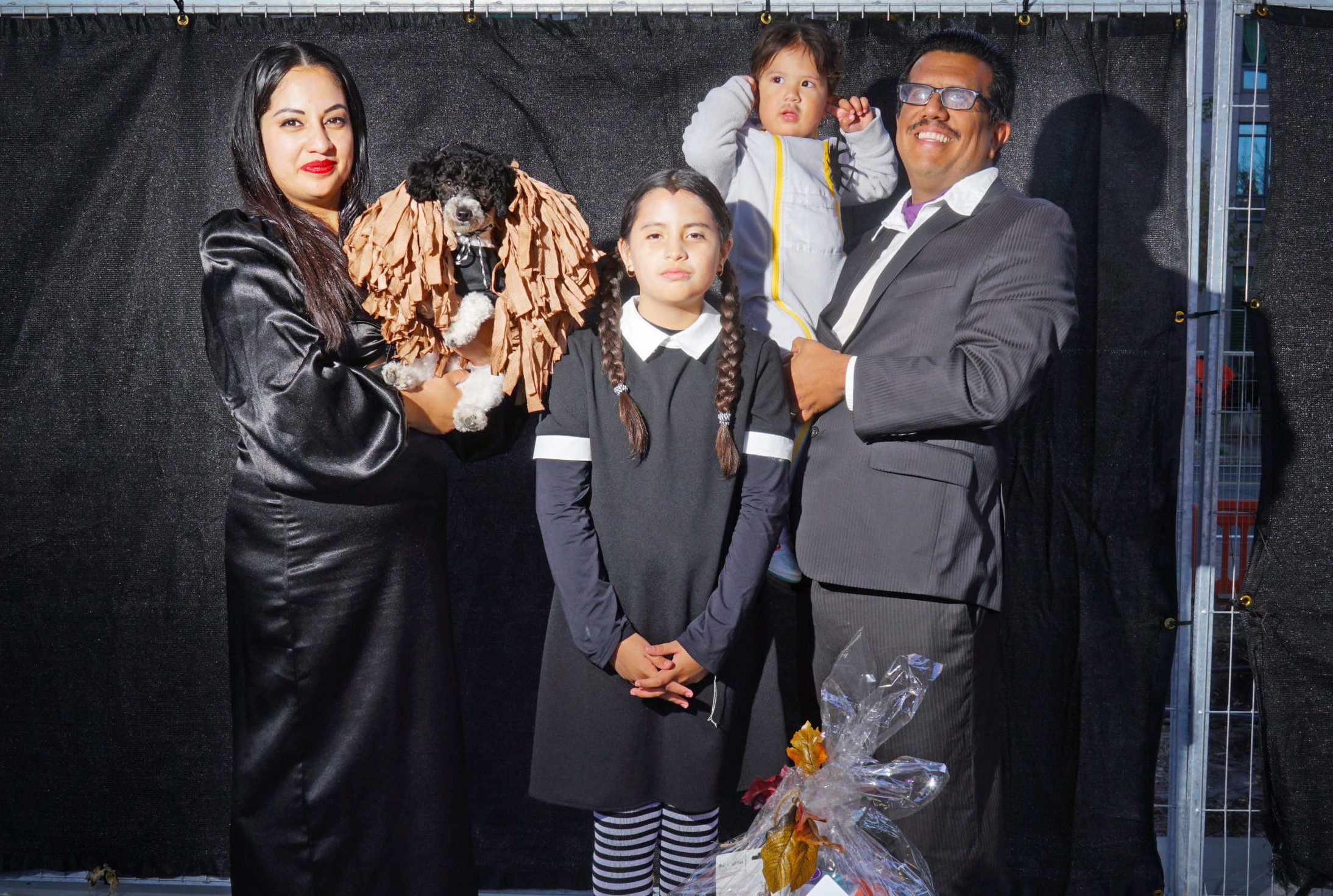 “Our daughter Paula likes Wednesday Addams, so she picked her costume first and then we figured, Why not dress up as a family? Our dog is Cousin Itt. My wife is very crafty: she dyed the fabric and sewed it to a dog sweater. We love Halloween—it’s our favourite holiday. We try to go all out for the kids. Our house is wildly decorated. We have skeletons, ghosts, pumpkins and hay in the yard. We even set up a little cemetery.” 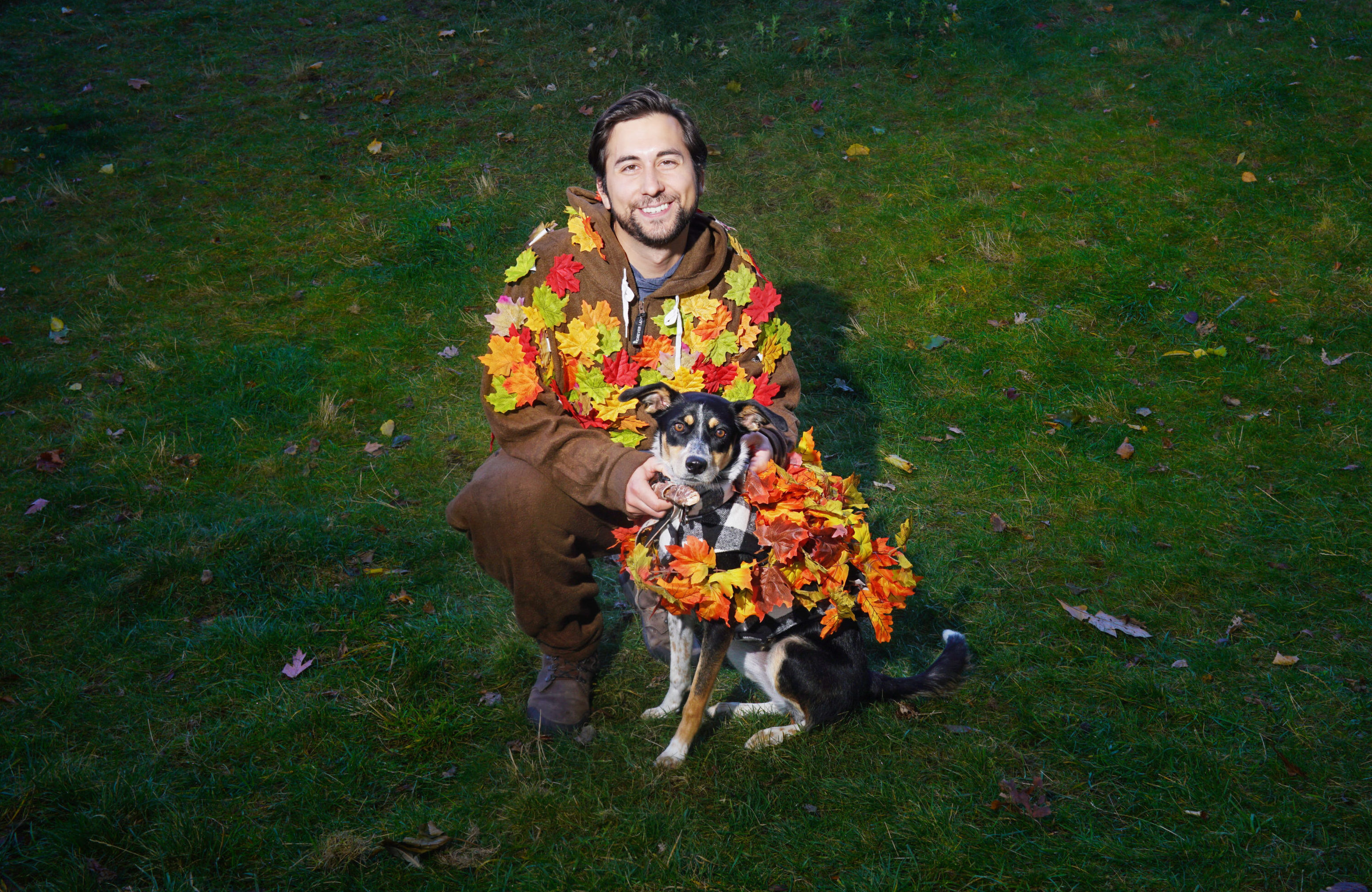 Fall tree and a pile of leaves

“I’m a bit bashful about the whole costume thing. Ruby is only 11 months old, so this event has been a lot for her to take in, but she’s enjoying it. She’s definitely a diva, which helped on the runway. The costume is DIY.” 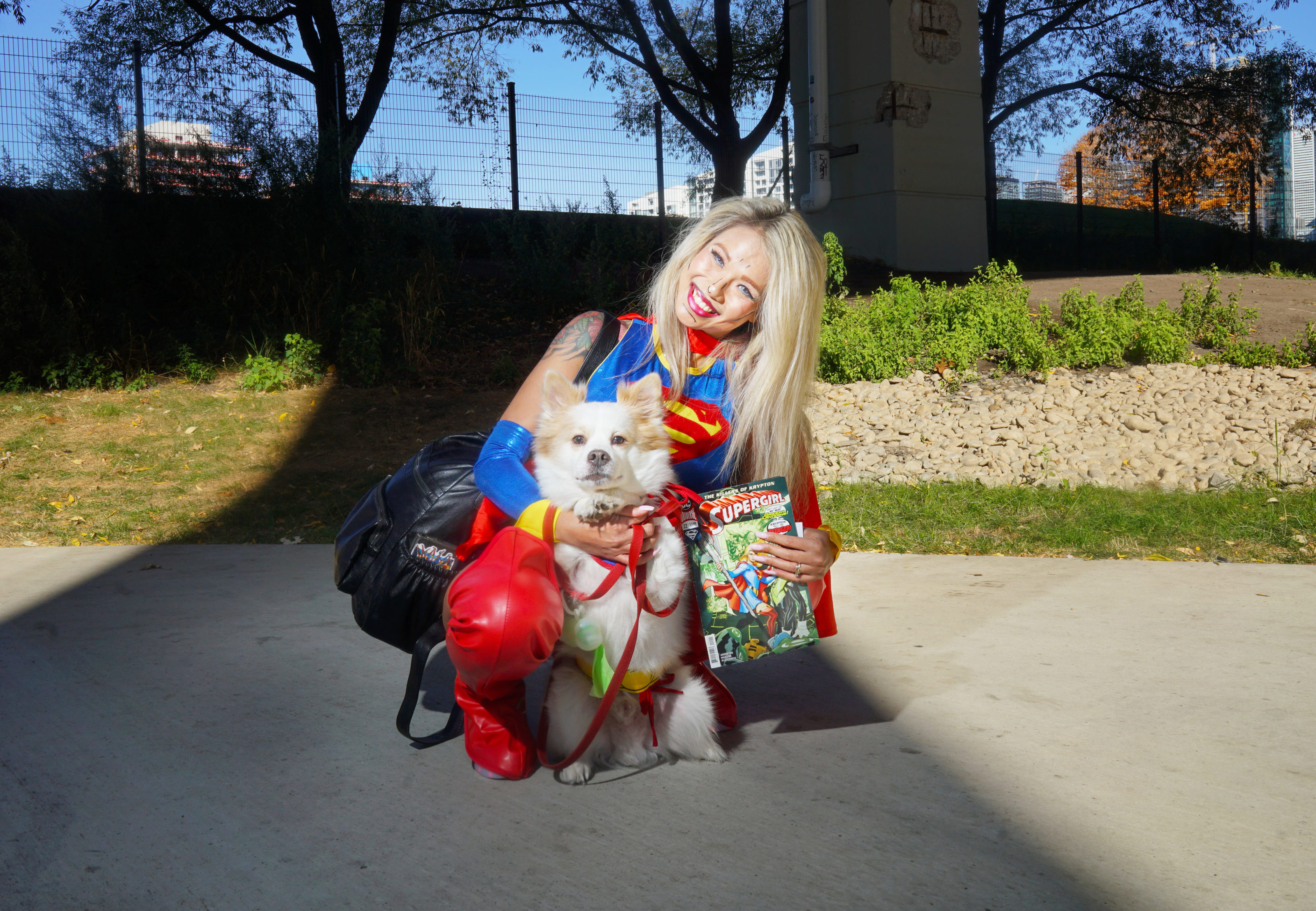 “I cosplay as Supergirl, so I landed on our costumes because Wolfie looks exactly like Krypto. We match just like in the comic book. It’s the first time he’s dressed up with me, so this is his debut. He actually liked it when I put the costume on him—he didn’t fight it. I think he enjoys being a superhero. Wolfie has a little bit of social anxiety, but he can definitely pose. He was good on the runway too. We did a little dance in front of the judges.” 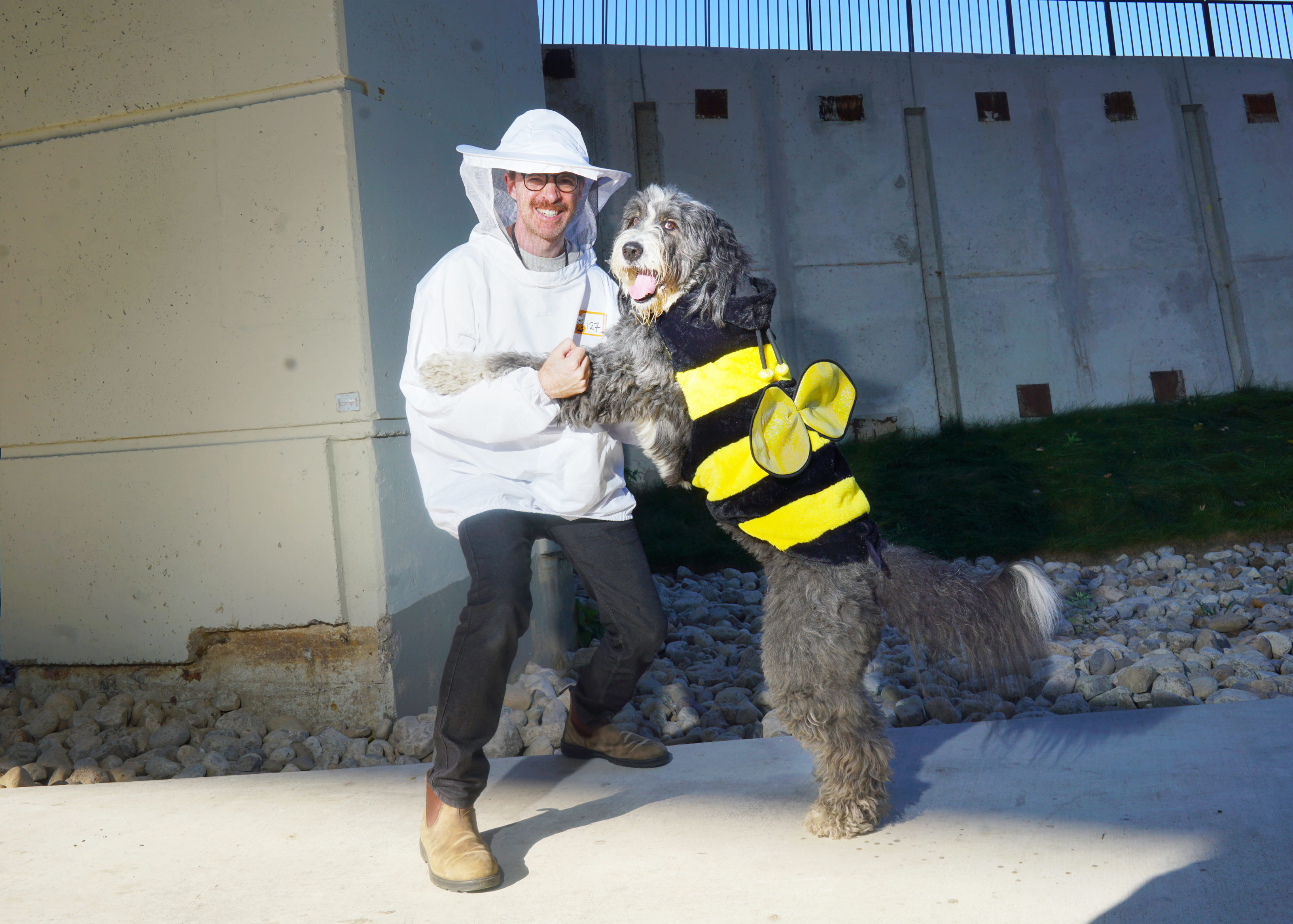 “Daisy is super chill, even if I’m putting her in an outfit or boots or a coat. I thought about dressing up as Raccacoonie from the movie Everything Everywhere All at Once, with Daisy perched on my head, but logistically that would have been dumb. I would have broken my neck or something.” 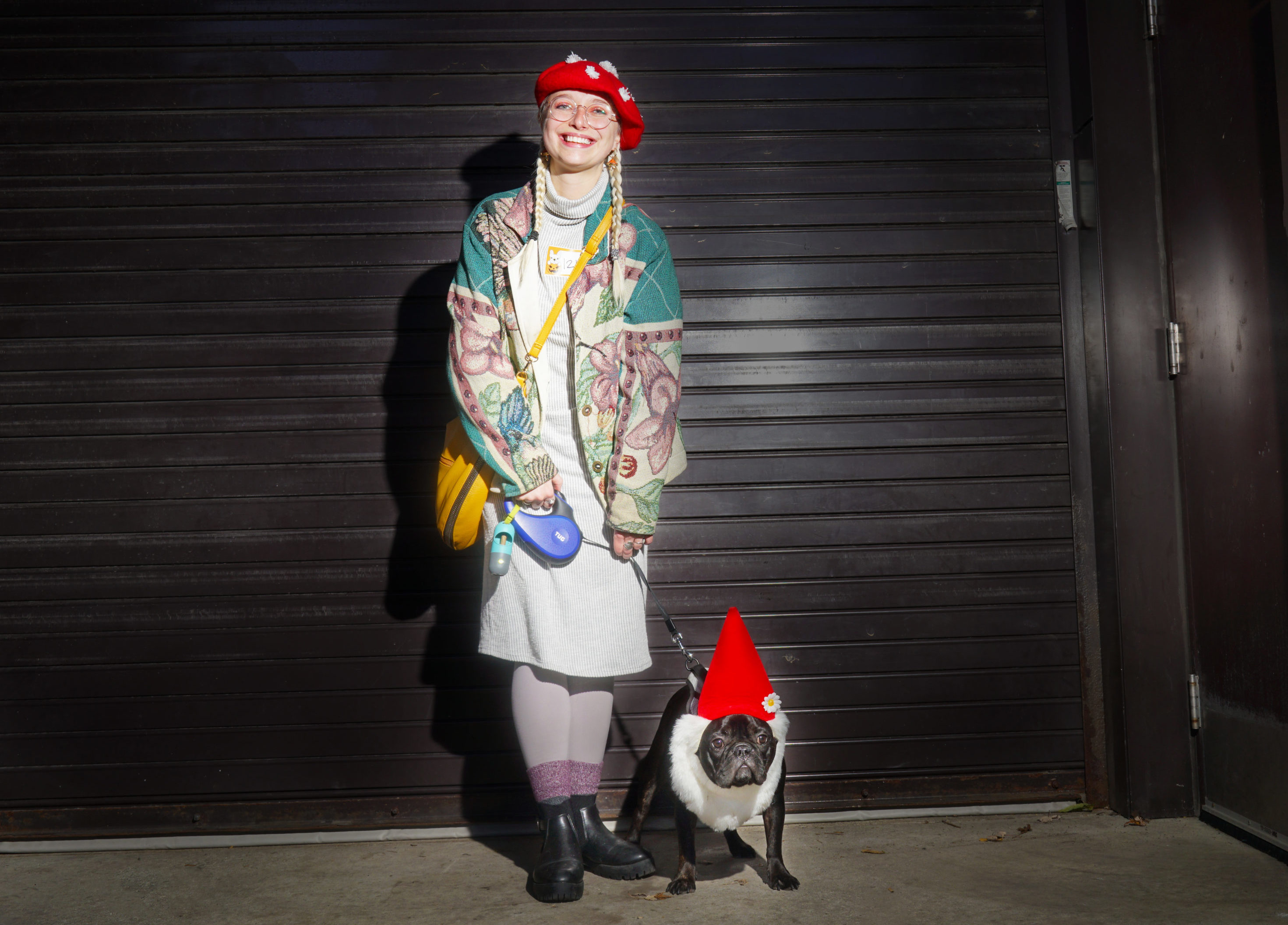 “I love fairy tales and folklore, which is why I chose this costume. Pudge is not quite two years old, and he’s full of beans. He doesn’t like wearing the outfit very much, but he looks pretty cute. We’re going to get dressed up for Halloween night as well, to see if we can put some smiles on people’s faces. We may not be able to get him back into this costume, though. We have a Stitch onesie, from Lilo and Stitch, which may be a little easier for him.”