When George Otto disappeared while out on bail, his wife reported him missing. It turned out he’d fled to his home country of Uganda

I spent the better part of last year reporting an investigative feature for Toronto Life about George Otto, a Richmond Hill doctor who, along with a pharmacist named Shereen El-Azrak, trafficked more than 4,000 fentanyl patches onto the street, earning as much as $9,000 a week under the table. In November 2019, he was sentenced to 12 years in prison. He left an Oshawa courthouse in handcuffs that day and was transferred to Central East Correctional Centre, a medium-maximum security prison in Lindsay, Ontario, to serve out his sentence. 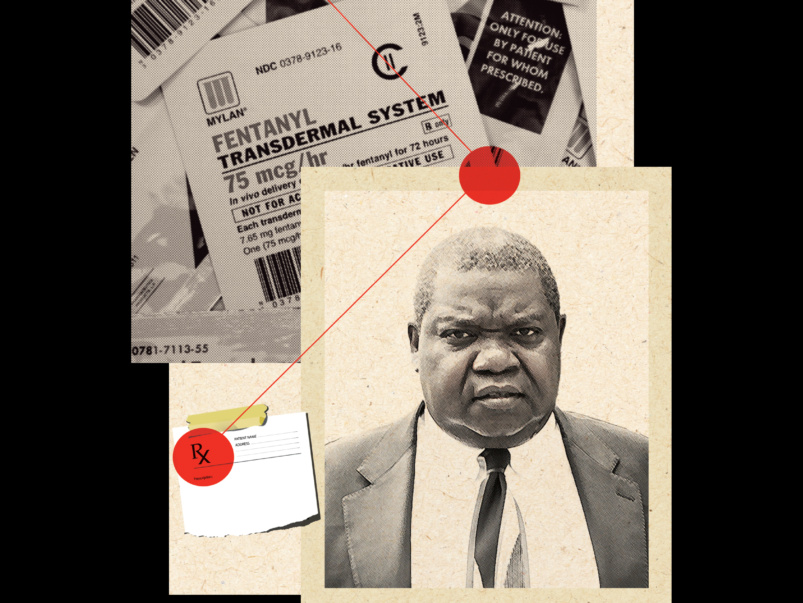 The story was a challenge to report, especially in the midst of a global pandemic. For months, I chased police, got stonewalled by lawyers and tried to gain access to public documents from a slow-moving court system whose employees’ natural inclination was to shield exhibits from my view. One character in the story tragically died of a fentanyl overdose while I was piecing together the narrative. Despite my best efforts to interview Otto, his family and his lawyers, not a single individual from his life would speak to me. Most didn’t even bother to reply to my emails, texts or phone calls. The usual journalistic workaround of knocking on peoples’ doors was near-impossible amid never-ending stay-at-home orders.

A week after the story was published, I received an unusual email from a man who’d just finished reading it. The email was titled “Dr. GO” and it read: “You got everything except one. Dr. Otto is free as a bird. He is living the good life in Kitgum, Uganda. Otto fled Canada just before Christmas 2020. He is gone, and will not spend a single day in jail for his crime.”

I was skeptical. Reporters get unsolicited tips all the time. Most of them don’t check out. And it came on April Fools’ Day. Then, just after midnight, my phone started to buzz. An unnamed source was messaging me on Instagram. He said he was a close friend of Otto’s family. He too wanted to alert me that Otto had fled the country. “He will most likely never come back,” the messenger said. “He will practise in Africa. We’re thinking either northern Uganda or central Africa.” The messenger added: “If I’m being honest he’s fucked his family over.”

But how? How could a man who was tried by a jury of his peers and sentenced to 12 years in prison in an Ontario Superior Court get out of jail and flee the country? At Otto’s sentencing hearing, Justice Joseph Di Luca described the doctor’s crimes as “a severe and manifest breach of the public’s trust.” Di Luca said the 12-year prison sentence was supposed to send a clear denunciatory message to others who might commit similar offences. I tried to find out more about my tipster and how he knew Otto, but he refused to divulge any additional information.

The case file was still sitting on my desk. Otto had appealed his sentence, but when I’d pulled the file, there was no mention of any release. I reopened it and started firing off emails, first to the attorney general’s office to ask what was going on, then to Nicholas Ibbott, the now-retired York Regional Police detective who’d spent months gathering evidence against Otto before ordering his arrest in a Home Depot parking lot back in April 2016. “He is gone?” Ibbott wrote to me. It took two weeks for the attorney general’s office to get back to me, but when they did, they confirmed that the doctor had been granted bail pending appeal—and then he absconded.

I spent the next few weeks piecing together how Otto managed to dupe the Canadian judicial system and flee the country. It seems that one week after being sentenced to prison, Otto filed what amounted to a one-page, four-point notice of appeal. He argued that Justice Di Luca had erred on questions of law and that his sentence was harsh and excessive. Six days after that, Justice Benjamin Zarnett granted Otto an judicial interim release. At the time, Otto had served just 13 days of his 12-year sentence. His brother Francis put up $100,000 bail and agreed to act as surety for the disgraced doctor. George’s Canadian and Ugandan passports were seized, and under the terms of his bail, he was to reside in a rented cookie-cutter suburban home just off Yonge Street in Richmond Hill. He and his wife, Jacqueline, had sold their six-bedroom, 10-bathroom Richmond Hill mansion with the double-level five-car garage two months before Otto’s sentencing. The sale price: $3,445,000.

Under Otto’s bail conditions, he was ordered to remain in Ontario, to not work as a physician and to pursue his appeal with all due diligence. Then the pandemic hit and he was granted a six-month extension by the court with an order to surrender himself on November 27, 2020, at the same prison in Lindsay that had let him out. But Otto didn’t show up at the prison on that day. Five weeks later, a warrant was issued to all police officers in Canada to arrest George Otto and to deliver him to any jail in Canada to be detained for the term of his sentence.

On November 19, he’d left Richmond Hill early in the morning to visit another brother, Geoffrey Otto, in Thunder Bay. Two days later, he hadn’t arrived in Thunder Bay and he wasn’t answering his phone. His wife, Jacqueline, called police and reported him missing. She told police he’d been depressed and emotionally distant.

Police later spoke with Geoffrey in Thunder Bay, who told them that he had reason to believe George was in Ethiopia, on his way to Uganda. “Jacqueline was visibly shocked and instantly became emotional when she learned that George may have fled the country to avoid incarceration,” the missing person report reads.

Two weeks after Jacqueline reported her husband missing, Francis Otto called York Regional Police, concerned that the $100,000 surety he’d put up would be lost now that his brother had fled. He also said a family member in Uganda had told him “a plan had been in place for George’s disappearance for a few months now.” Otto’s wife and brothers didn’t answer interview requests for this story. Only his eldest son offered any response, saying the family has been negatively affected by the media around the case, and asking me not to involve them in the piece.

Otto’s appellate lawyer, Michael McKee, says he hasn’t had any contact with his client since mid-November, adding that he had no indication that Otto had fled the country until he didn’t show up for a scheduled meeting. “It’s extremely rare,” McKee said. “In my 30 years, I can say that I’ve heard of one other instance. I can understand why he might have done it but I certainly can’t condone or encourage any such behaviour at all. It was a complete and total surprise to me.” Still, McKee says, he doesn’t regret helping Otto obtain bail. “I found him to be a very polite, articulate, thoughtful and intelligent man who for whatever reason immersed himself in a scheme that was way over his head.”

And so Doctor Fentanyl has become an international fugitive. Geoffrey Roy, the crown attorney who prosecuted Otto, was disappointed that Otto escaped. Roy, who early in his career worked as a junior prosecutor on the terror trials of the Toronto 18, worked on Otto’s case from the time of the doctor’s arrest in 2016 up to his sentencing in 2019. “I tried really hard to prosecute this guy as fairly as possible,” he said. “That’s what I take pride in, and in trying to get a fair sentencing. It would be nice if justice were served.”

Assuming Otto has fled to Uganda, it would take an extradition request from the federal department of justice to get him back to serve his sentence. Canada doesn’t have an extradition treaty with Uganda, which means that the request would have to be formally made by the Canadian consulate in Uganda. The federal department of justice made a total of 136 extradition requests around the world between 2015 and 2020; 32 of those were from non-treaty countries. A spokesperson from the DOJ told me that the majority of these requests have been successful, but they’ve never sought anyone’s extradition from Uganda.

They declined to say whether they’d made any such request in the George Otto case, but explained that they can only seek extradition at the request of the body responsible for prosecuting the person in Canada—in this case, the Public Prosecution Service of Canada. That office, meanwhile, declined to comment.

Robert Currie, a specialist in transnational criminal law at Dalhousie University, says the case may be complicated by Otto’s dual citizenship—he was born in Uganda and immigrated to Canada—and the support he has in Uganda’s upper echelons; he has connections to Makerere University in Kampala, and used to entertain Ugandan dignitaries when they visited Toronto. Currie says extradition requests can often get stalled or ignored if the wanted individual is well-connected in the country where they’re hiding out.

Gary Botting, a veteran extradition lawyer, believes there’s practically zero chance Canada will get Otto back. “If Canada made such a request it would be automatically denied,” he says. “If Otto has Ugandan citizenship, the government there will likely protect him from extradition.” The best chance Canada has of getting him back, he says, would be if Otto were to set foot in any of the 51 countries where we do have extradition treaties. There, he could be arrested on the spot and extradited to Canada to serve his term.

As for Otto’s brother Francis, he might not even lose his $100,000. “It’s not automatic that the surety loses their money,” Geoffrey Roy explained. There would have to be an estreatment hearing. If the surety did everything right—reported him missing, had no part in the escape—he might get his money back.

Otto’s main accomplice, the pharmacist Shereen El-Azrak, who was sentenced to 13 years in prison, has also been released on bail. Her lawyer filed a four-page notice of appeal to the court 19 months ago and has until May 31 to perfect it. El-Azrak will not have to check herself back into custody until September 30.

In the meantime, Otto’s friends aren’t worrying about the man now known as Doctor Fentanyl. “You need to travel to Kitgum if you want to find him,” the tipster told me in one of his last emails. “Nice place.”

An earlier version of this story stated the Attorney General's Office of Ontario had prosecuted Otto, when in fact it was the Public Prosecution Service of Canada.