Are Amber Alerts effective? An OPP officer and a professor debate

Are Amber Alerts effective? An OPP officer and a professor debate

In 2018, when Amber Alerts started appearing on mobile devices across the province, Ontarians were divided. For some, the messages provided important information about recent child abductions that could assist in child-saving efforts—potentially meaning the difference between life and death. Others were irritated by their phones blaring in the middle of the night, baffled as to how they could possibly help recovery efforts in, say, North Bay, if they were nearly 700 kilometres away in Windsor.

Staff sergeant Stacey Whaley, who manages Ontario’s Amber Alerts, says the publicly broadcasted messages are a crucial tool for law enforcement officers. But for associate professor of criminology Skip Griffin, who has studied Amber Alerts in the United States for more than a decade, the notifications are actually far less effective in helping to recover abducted children than we’d like to believe. We put them on a phone call—Whaley in Orillia, Griffin in Nevada—and let them duke it out.

How does the Amber Alert system work in the province of Ontario?

Whaley: The OPP facilitates the program. There are 50 police services in Ontario. When an abduction occurs, the local police will check to see if it meets certain criteria. In Ontario, the criteria is met when law enforcement believes that a child under 18 years of age has been abducted, the child is in danger, and there’s descriptive information about either the child, the abductor or the vehicle. The municipality would then contact the OPP, who are the conduit to an agency called Alert Ready, which operates out of the Weather Network building in Oakville. Alert Ready sends out the alert over TV, radio and mobile devices across the province. If there’s an abduction in the northwest part of the province, we don’t isolate it to that area. Everyone gets the alert. Amber Alerts also show up on electronic highway signs, social media and lottery terminals.

Griffin: I’ve been looking at the issue for 12 or 13 years now. Most of the conclusions I’ve drawn have been based on cases in the United States. Though I fully commend the work of people like Sgt. Whaley who issue Amber Alerts with the best of intentions, I’ve come to the conclusion that the system is being oversold. It’s really not quite the child protection mechanism we would all like to think it is. There are two main reasons. First, the people involved in these abductions don’t often meet the criteria of a deadly predator. It’s far more likely you’re going to see some sort of familial abduction—something involving a non-custodial parent, another relative, a wayward babysitter, an ex-boyfriend or -girlfriend. Where Amber Alerts appear to be working is in cases where there’s not a lot of compelling evidence to suggest that these abductors posed a threat. Second, most Amber Alert recovery times are slow. In the United States, the research shows that if there’s going to be a murder, it’s going to happen pretty quickly. So, generally, there’s not a lot of evidence to suggest an Amber Alert is effective at saving children from imminent peril, harm or death.

Whaley: Well, once we’ve successfully recovered a child, we obviously can’t know whether the situation would have ended in tragedy had we not acted. All we know at that point is that the kid is safe, which is good enough. I can tell you that in 2019, eight Amber Alerts were issued in Ontario. All of them were familial abductions, and one of them did result in a homicide, when the biological father of an 11-year-old girl murdered her. So I don’t agree that there’s no risk of murder if the child gets abducted by a family member.

Griffin: That case illustrates something very powerful about how we think about Amber Alerts. That case is actually quite unusual in that a family member murdered the child. It’s very unlikely that a biological parent is going to kill their child under any circumstance. And when I first saw the headline, I just assumed that the murder charge would be for some other person, because that’s far more likely. The abductor murders the ex-girlfriend, they murder the ex-wife, they murder some other custodial parent, but the child is safe. I think this case shows that the most important variable in determining the fate of an abducted child is not anything that law enforcement does in response, or that citizens can do. The biggest factor determining the fate of that abducted child is what the perpetrator intends to do. And once the child is in the possession of a sufficiently motivated perpetrator, there’s really nothing we can do fast or effectively enough to prevent that from happening. My concern is that when there’s a successful rescue, it could mistakenly be conflated with lifesaving success or a rescue from imminent harm when, in my view, there’s no compelling reason to believe that. Really, the perpetrator’s intention is the thing that’s most important, and the thing we have least control over.

Whaley: Ultimately, we’re not here to assess the perpetrator’s intention. I mean, maybe this man didn’t have the intent to harm his daughter but desperation kicked in. Obviously, we’d love to have that information, but getting the Amber Alert out quickly is crucial, and we can’t waste our time with what-ifs. The safe recovery of the child is always our number-one goal. When Amber Alert criteria are met, we’re going ahead with it. And by putting out an Amber Alert, we want the public to help us with that. We believe that policing is not just the role of law enforcement, but every community and every citizen has a role to play, and we’re just holding everybody to that.

Of the 12 children abducted in Ontario in 2019, 11 were returned. How many were returned safely as a direct result of the Amber Alert?

Whaley: I can’t say exactly, because it’s up to each municipality whether they want to investigate the case afterwards. All we know is we put the alert out, then an hour or two later we may get a notification from an agency saying, “Child’s found safe. We no longer need the alert. Please cancel it.” And sometimes that’s all we know. My curious mind wants to know whether the Amber Alert directly resulted in the recovery of the child, but the OPP is not usually the investigating agency. In one case last year, a mother abducted her son, and several hours later, they were found eating lunch at a Kentucky Fried Chicken about 300 kilometres from where the abduction took place. Two people behind the counter saw the Amber Alert, saw them sitting there eating lunch and called the police, who went in and made the arrest. That’s a clear-cut case of bystanders seeing the Amber Alert and helping return the child safely.

Griffin: Yeah, we definitely see that kind of case in the data we’ve analyzed. It’s a classic situation, where a bystander at a hotel or a restaurant says, “I recognize these people from the alert.” According to the National Center for Missing and Exploited Children, Amber Alerts have a success rate of roughly 20 to 25 per cent in the U.S. But there’s another statistic: 95 per cent of the kids in Amber Alert cases make it home safely. These kids are making it home safely anyway—the Amber Alert had nothing to do with it. It’s usually normal investigation that returns the child. In your intuitive take on the data in Ontario, is that roughly the same?

Whaley: I could only speculate, because I didn’t investigate every single instance. You should also take into consideration that the Amber Alerts put a different kind of pressure on the abductor. When they see their face on TV and mobile devices, all of a sudden, they’re like, “Okay, I can’t do this because my picture is everywhere and I’m going to give the child up.” So, indirectly, the Amber Alert has been effective.

Griffin: We see that in the data, too. It’s reported that the abductor saw the alert, had an “oh shit” moment and panicked. I’ve seen cases where they pull over on the freeway, call the police and say, “Look, I’m the subject of the Amber Alert. Come and get me. I’m not moving. I want the record to show that I’m complying.” We’ve also had the abductors drop the children off at hospitals or police stations, to try to get away with it. I call this the “intimidation effect.” But I don’t think we’ve sufficiently investigated what I call the “precipitation effect,” where the alert could actually send a distraught abductor over the edge: “Look, if the whole world is against me, they’re coming to get me, they’re going to take my kid away. If I can’t have my kid, no one can.” And I can’t prove that, but there are cases very consistent with that. I think it’s leading the public to believe, at least in the U.S., that an Amber Alert is some kind of silver bullet that means “I automatically get my kid back if there’s an Amber Alert, so where’s my Amber Alert?” That’s a terribly mistaken thing to believe.

Whaley: You’re right there. That’s not the idea with Amber Alerts. It’s another tool in the law-enforcement toolbox. 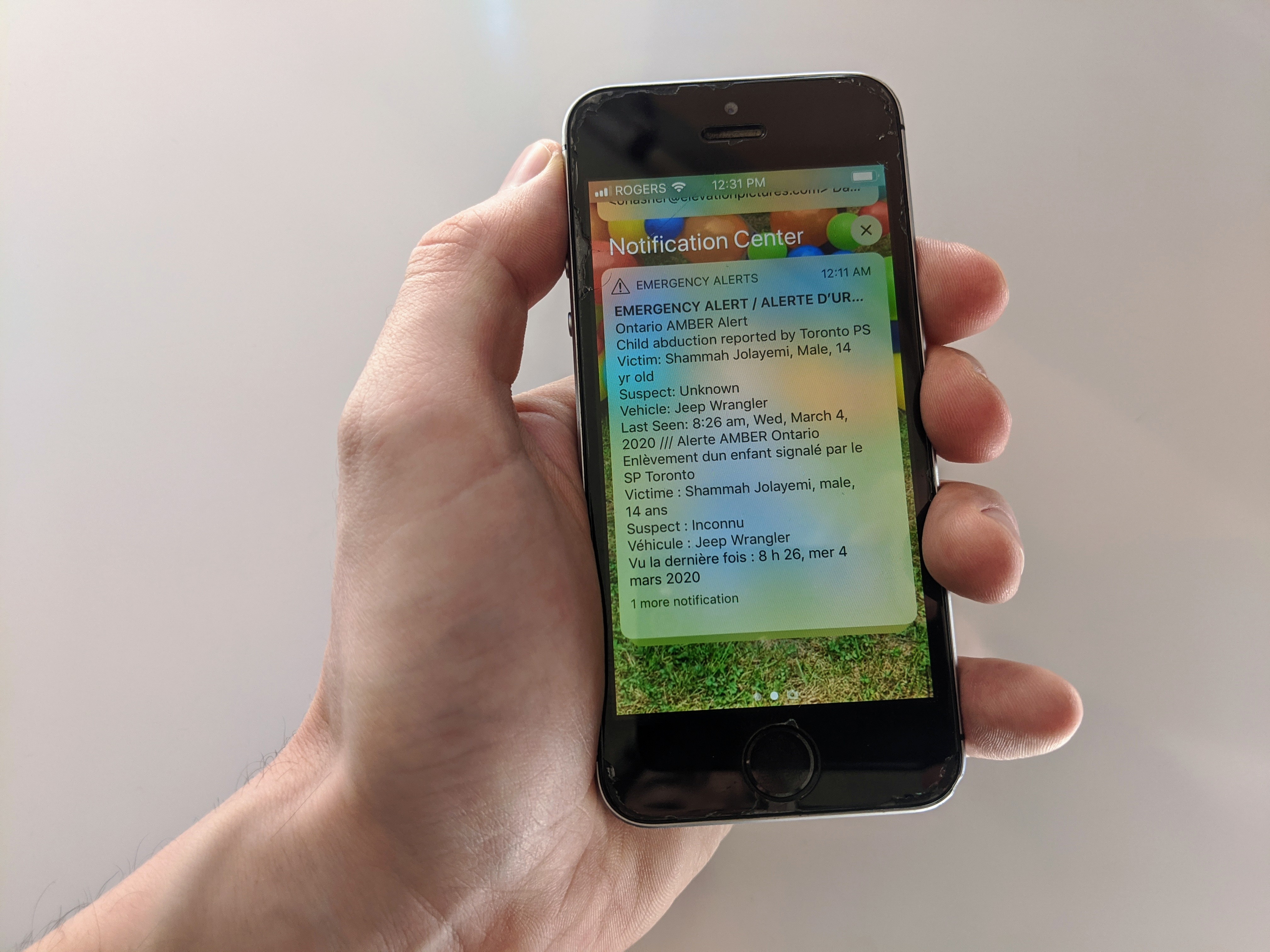 Griffin: It’s an outstanding question. I’ve looked at thousands of these, and I’ve seen two or three cases, maybe four, where I go, “These are Amber Alert successes, no doubt about it.” And I can see how the perpetrators in these cases might’ve been homicidal. But I’ve never seen a case where it’s unequivocal, where you clearly have a sex offender or someone who seems likely to commit murder, when the alert combined with a rapid recovery prevented harm.

Recently, a man in Hamilton was charged with mischief after calling 911 to complain about an Amber Alert. The man said that the alert, which went out around 5 a.m., had interrupted his sleep. What did you make of this complaint?

Whaley: Mobile devices have only been included in Amber Alerts since April 2018. In 2019, we had quite a run of Amber Alerts happening at night when people were sleeping, and that’s a different dynamic altogether. It’s not like you’re just sitting in your office and the alert goes off and you just silence it—instead, you and your family might be woken up. But we don’t have any control over that. When the decision’s made to put out an Amber Alert, we aren’t going to consider the time of night or if we’ll wake people up. A child is in danger, this is the tool we have, we have the request, it meets the criteria, we’re going to put it out. It’s a minor inconvenience as far as I’m concerned.

How would you improve Amber Alerts?

Griffin: If you’re talking about saving children from harm by a motivated perpetrator, I don’t think Amber Alerts can be improved. It comes down to what the perpetrator wants to do, and all the technology in the world is not going to help that. Despite the system’s good intentions, I’m concerned that it can distract us from the real problem. Most of the abductions are familial, so let’s look at domestic violence, child abuse, neglect. Should we be satisfied with Amber Alerts when what we really need is more Stacey Whaleys going into these broken homes and fixing these problems before they result in children being abducted?

This conversation has been edited for length and clarity