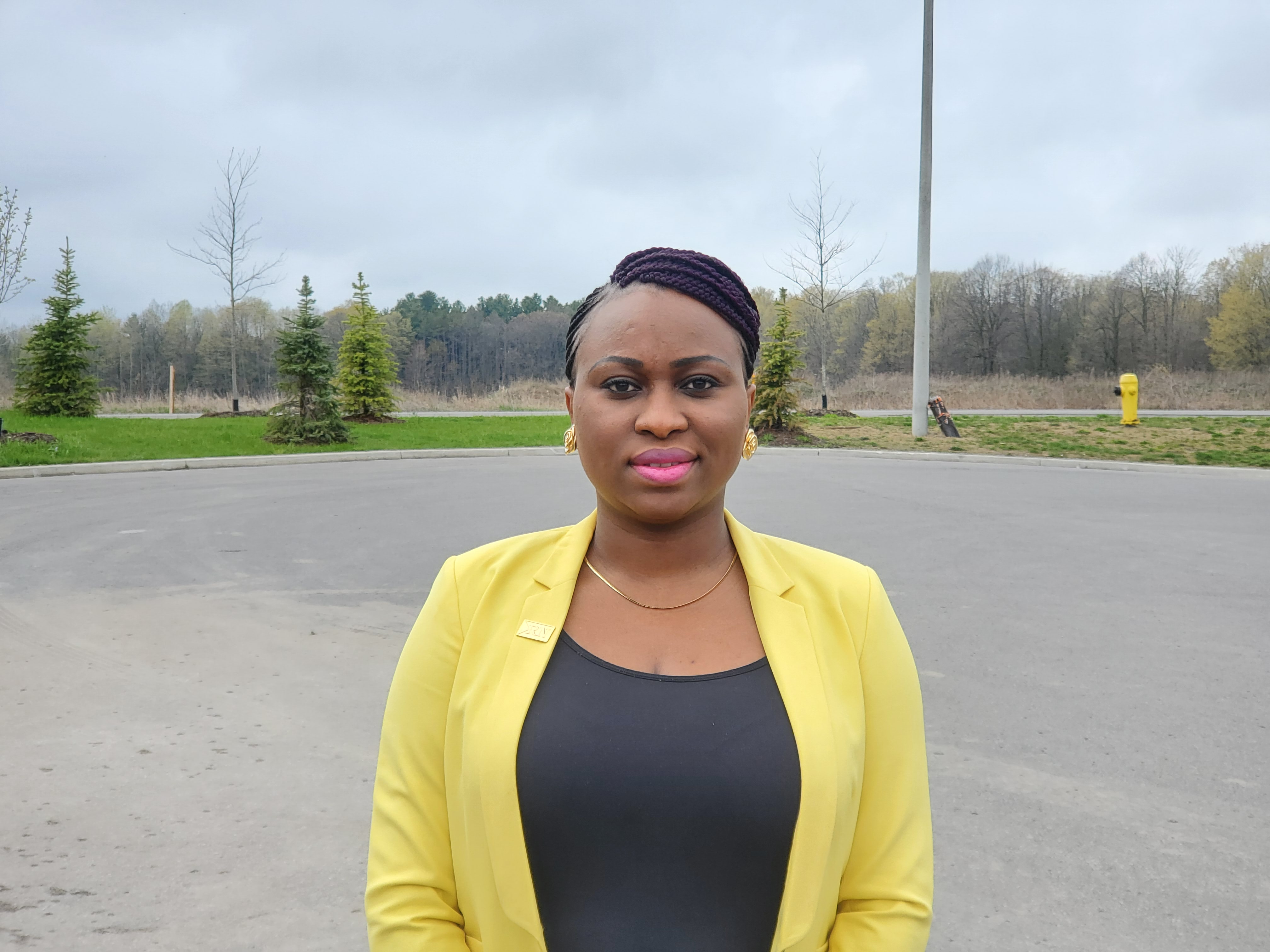 Birgit Umaigba is a 34-year-old ICU nurse working in the GTA; she also teaches in the bachelor of nursing program at Centennial College and is the clinical course director for internationally trained nurses at York University. Here, she talks about what it’s been like working in the ICU during the third wave.

“I’m an agency nurse, which means I work in various hospitals across the GTA. I’ve worked in many different units, including emerg, surgical, palliative, cardiology and nephrology. For the past three years, I’ve been in the ICU. There, we manage patients’ health from head to toe, trying to rule out anything that might be happening. We have time to look through all the data and the health history and the intersecting factors and figure out how they could put a patient at risk. We’re interacting with all the members of the team: the doctor, the physiotherapist, the pharmacist, the personal support worker. But even before the pandemic, we were always working short-staffed, and it’s burning us down.

“Registered practical nurses usually need to do two years of college-level nursing school, but in order to work in the ICU, you need to complete four years of a bachelor nursing program and a critical care course, which takes four months if you’re sponsored by a hospital, or eight to 12 months if done independently. In addition, many ICU nurses have to take extra courses, plus yearly recertification courses to maintain their skills. These are expensive and time-consuming. You don’t get paid more for working in ICU, but you have the extra burden of constantly seeing trauma and death. It’s more emotionally and physically depleting than other areas of nursing.

“After the first wave, a lot of my colleagues were recruited to work in the U.S. with incentives like starting bonuses and free accommodation. Some of them went to the hardest-hit communities, like New York City, and were offered $10,000 a week to work. I know one ICU nurse working in the GTA who sold her house and moved to the States with her family. It becomes almost impossible to stay in ICU because of all these perks for less-traumatic jobs. The government has to incentivize nurses in the ER and ICU for better retention. I know at least 30 nurses who have left the ICU for less stressful units. You’re not stuck in a room wearing PPE doing chest compressions on a patient who’s dying. You don’t have nightmares about patients dying every day. Last year, during the first wave, I swabbed NHL players at the Scotiabank Arena because I just needed a break. But it was too boring for me, so I went back. There’s going to be a mass exodus of nurses after the third wave. Out of allegiance to their colleagues and patients, they’re waiting. But once we get through it, they will be done.

“During the third wave, things are changing fast. It’s so stressful. It’s so chaotic and noisy. It’s non-stop code blues. And I am just so tired. I’m watching patients who are young and sick on the ventilator and thinking to myself, Is this one going to make it? We’re seeing all kinds of people, from factory workers to daycare workers—you name it. They have no pre-existing health conditions, so you think, Okay, they can do this, but they decompensate so fast. In April, I treated a young unvaccinated childcare worker who was on a ventilator, fighting for their life. That case stuck with me. I remember a day during the second wave when I walked through every room in the ICU, and all the patients were racialized. It was horrible, and it highlighted the systemic inequities in our society.

“For a normal person, oxygen saturation is usually over 95. Many Covid patients come in and sometimes they’re at 70, 50, 55, and they have to be on the ventilator. In normal times, we wouldn’t see this unless a patient had underlying respiratory issues or it was flu season. We’re now seeing around one or two of these patients per shift. If their oxygen keeps going down, they have to lie prone, and it takes at least four nurses and two respiratory therapists to turn a patient on their belly. When patients are unstable, every slight turn makes their respiratory status decline, so you have to suction them, give them more oxygen and wait for them to recuperate before finally making the next turn. Imagine doing that for 10 patients, working short-staffed. Ideally, there should be one nurse per patient, but right now we’re seeing one nurse per two patients on ventilators. In some of the bigger ICUs where I’ve worked, we’ve been 10 nurses short. In those kinds of environments, mistakes are bound to happen. And that’s when you see nurses going home in tears, crying in their cars and calling it quits. Once I was managing two patients on ventilators. My heart was racing because there was one point where they were both declining at the same time. I hurt my neck while rushing to move a patient. I had to cancel my shift the next day.

“The physical aspect is so exhausting. Patients can develop bed sores within two hours, so we need to turn them every two hours. Now imagine the patient is intubated with 10 drips running, wearing boots on both legs to prevent ulcers in the heels, and the patient weighs 300 pounds. They’re fully sedated, so it’s dead weight. We’re in the ICU rooms for long periods of time in full PPE. I come out of the room sweating.

“I just took five unpaid days off to replenish myself mentally. I do that frequently. On my first day off, I have to recover from these vivid memories and thoughts. I put myself into the patient’s shoes and think, Oh my gosh, she has a 10-year-old at home. I have a daughter the same age, so I start to internalize that and it lingers. My daughter brings me a lot of joy, though. And I’m spiritual. I pray for my patients, even while I’m working. I brush their forehead and I say a prayer, whether or not they believe.

“I’ve had to isolate twice during the pandemic. The first time was last March, when I was exposed to a patient who later came back positive for Covid. The second time was in October, when I got Covid myself. It was devastating. I’m used to being physically exhausted and achy, so the symptoms were more or less the same. But the fatigue was so much worse. My daughter was completely distraught. She burst into tears—she thought I was going to die. I explained to her that a lot of people recover and not everybody ends up in the hospital. It was really, really hard. I spiked fevers, and I was weak and short-tempered. I lost my taste for three months. I still live with the fear that I could get it again.

“I didn’t get paid sick days either time I had to isolate. I don’t get benefits either, and it’s the same across the board for part-time or casual personal support workers and respiratory therapists. I find it’s mostly racialized nurses working with agencies because it gives us more control over our schedules. Some of us don’t have the support network to commit to full-time hours. Before schools closed, I worked full-time hours. Now I’m only working one or two shifts per week because I have to look after my daughter during online school. There’s no way to have a child in online school and be working. It’s impossible. A colleague of mine quit as soon as they closed schools because she has kids and it’s just her.

“We need a minimum of 10 paid sick days, paid for by the employer. Three just isn’t enough. We need the Ontario government to repeal Bill 124, which caps nurses’ salary increases at less than one per cent per year. Nurses are worth more than one per cent. We need more mental health support for all nurses. We need equitable vaccinations for nurses and other essential workers. We’re on the front lines fighting the war against Covid-19. We deserve fair compensation.

“I want people to know that Covid-19 is real. We’re seeing a lot of anti-maskers in the ICUs. This is putting an extra burden on us. People need to do their part. The deaths we’re seeing in this third wave were preventable. Let’s be real: if people have choose between putting food on their table for their nine-year-old or going to work sick, they will go to work sick.”