How I survived a psychotic break

How I survived a psychotic break

I heard voices, hallucinated and convinced myself the Illuminati were sending me messages

Two years ago, my mind unravelled. I record music under the stage name Cold Specks, and in late 2017, I went on a three-month international tour to support my third album, Fool’s Paradise. The shows weren’t selling, and I was playing to empty rooms. I thought my career was finished. Over the next few months, I stopped sleeping, clocking only three or four hours every few nights. I also starved myself, subsisting on 400 calories a day.

I returned home to Toronto in January 2018, broken, dishevelled and deranged. At the time, I was renting a friend’s condo on the 33rd floor of a building at Yonge-Dundas Square. I became convinced that several pop stars were members of the Illuminati, trying to recruit me through their music. I thought they had set up hidden cameras in my apartment and tapped my phone, and I’d talk for hours alone in my apartment, figuring they were listening. I’d see the giant video ads at the Eaton Centre outside my window and assume they were sending me hidden messages. I cut off contact with most of my friends, and feigned normalcy when I spoke to my family.

I knew I wasn’t well, but I thought it was just depression. Then I started hearing voices—I thought of them as demons. They told me not to eat, that I wasn’t good enough, that I was a failure. They wanted me to lose weight, so I began working out like a maniac, sometimes three times a day. I became deathly skinny.

One night, I called a friend, weeping and telling her what I was experiencing. Alarmed, she came over with a few others and took me to CAMH. But I refused to go inside, screaming and lashing out. Terrified, my friends called the police, who escorted me home.

I talked to my mom regularly but never told her about my delusions. A few weeks after the CAMH incident, I visited her store in Weston, where she sells Somali fabrics. I stumbled inside, convinced my thoughts were being broadcast to the world. I thought the people I passed on the street had been sent to represent the memories that haunted me. My mom was shocked at my unhinged behaviour, but before she could comfort me, I grabbed her Quran and ran out of the store. I walked a few blocks and called an Uber. The driver was Somali, like me, and I begged him to pray for me as I sobbed in the back seat. He dropped me off at a mosque, where I prayed for the first time in years.

When my lease at the condo was up, I went to stay at my sister’s house, where family members tried to get me treatment. Once, my cousin tricked me into thinking we were going to the mall, then took me to a hospital, where they kept me for a 72-hour psychiatric hold. I stayed awake the whole time, hallucinating and sobbing. A hospital can only hold a psychiatric patient if they appear to be a risk to themselves or others, and after three days, the medical staff had no choice but to let me go.

In June 2018, I broke into my old condo at Yonge and Dundas. I thought the Illuminati were trying to contact me there. The owner came home to find me in his place and called my family to tell them what had happened. They drove me straight to CAMH, where they put me on an involuntary hold. I stayed for two months while doctors tried to figure out what was wrong with me. I was miserable: the windows in my room wouldn’t open, and I wasn’t allowed outside. But soon I was eating three meals a day and gaining weight. I stayed off the Internet and read books instead. And within a few weeks, I was writing again. At first, it was a collection of words. Then melodies. Then piano and guitar chords. I was reflecting on my delusions, and it was beautifully therapeutic.

When my doctors diagnosed me with schizophrenia, I refused to believe them. There was no history of mental illness in my family, and schizophrenia seemed too heavy, too scary. “I’m not crazy,” I told them. “The Illuminati are trying to give me money.” On August 2, they injected me with paliperidone, an anti-psychotic drug. When it hit my system, I felt like I’d woken up from a prolonged nightmare. The delusions disappeared, and I was able to see them for what they were. What had I been thinking? Where had the last year of my life gone? I was in a state of shock and confusion, forced to confront the fact that I was seriously ill. And yet, for the first time in months, my head was clear.

A few weeks later, I was released from the hospital and moved back in with my family. I still get a paliperidone injection every three months, which helps suppress the symptoms of schizophrenia. I have no idea when or if I’ll be able to go off it. I’ve apologized to my friends for how I treated them, but many people still won’t talk to me, or don’t know how to talk to me—it’s possible some of those friendships are lost forever.

It took months to come terms with my illness. I’ve always been pretty stable, and the diagnosis hit me hard. My music was the only thing that pulled me through. The next time I record music, I’ll use my own name instead of Cold Specks. Because I finally feel like myself again.

Ladan Hussein is a musician in Toronto. 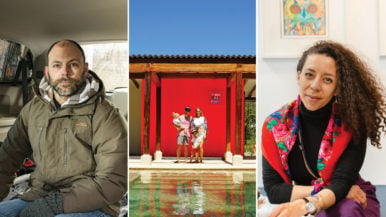