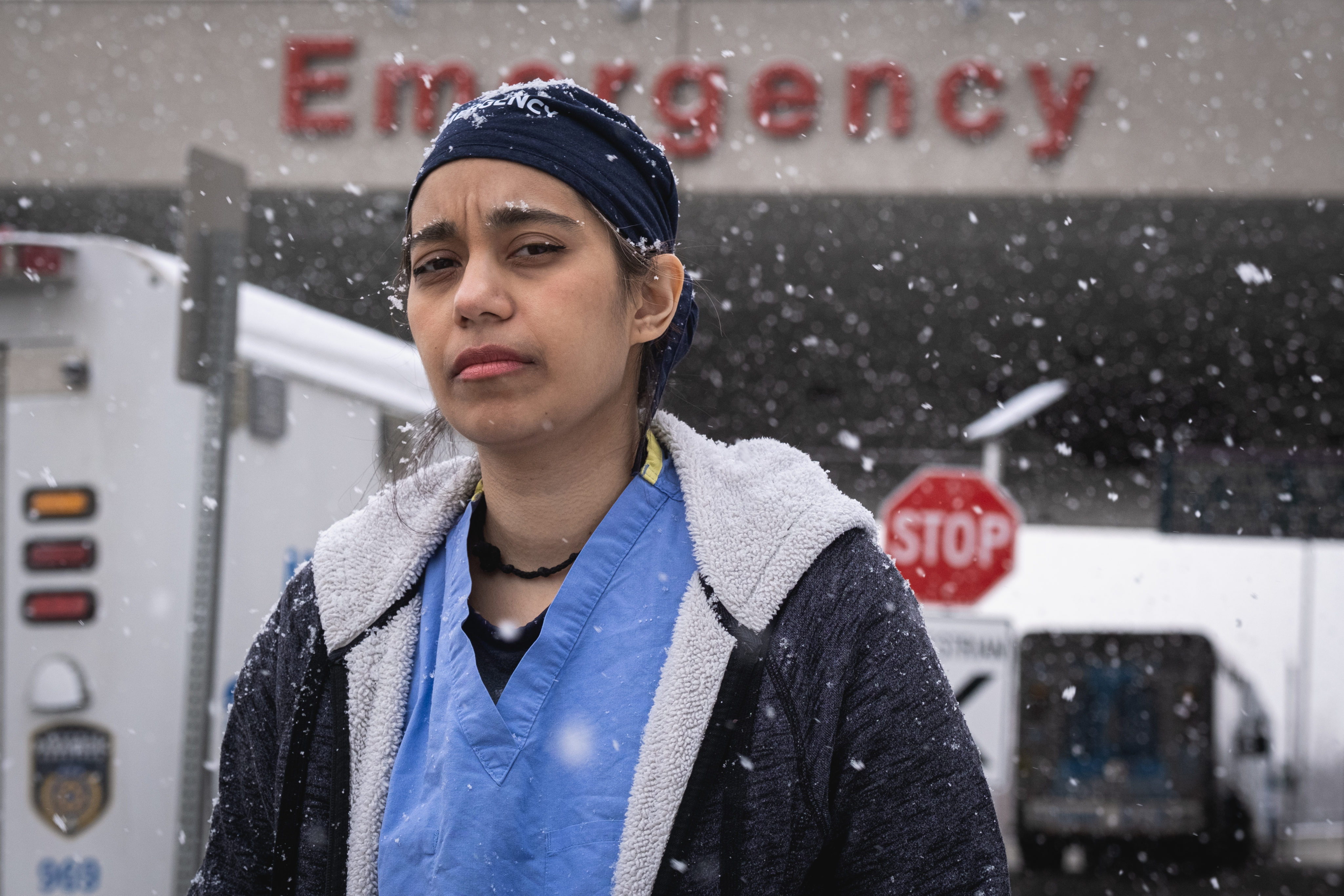 Eram Chhogala, an ER nurse at two hospitals in the GTA, lost her father to Covid last April. Nine months later, her ERs are busier and shorter-staffed than ever before. Here’s what it’s like for her to work in the ER right now.

“Last year, I lost my father to Covid. It was April of 2021, and he wanted to get the vaccine, but he didn’t meet the age requirement at the time. He followed all guidelines and he still got sick from a close contact at work. One day he called me and said he felt a bit under the weather. Later, my mom called to say he was short of breath, and I called an ambulance. He came into the ER where I was working, and my heart just dropped into my stomach. He was admitted, and a day or two later he was on life support. He stayed for about a month. I would work my shifts in the ER, then I would walk to the ICU to pray for my father and talk to him. It seemed like he was recovering, but he suddenly made a turn for the worse with complications from Covid, and then he passed away. It was a really hard hit for me.

“It’s difficult for me to push patients from the ER into the ICU because it brings back that terrible memory of my father being admitted. It’s scary to go into work and see people who get really sick really fast, who suffer, who are on life support. Sometimes people follow all guidelines and they still get sick. These people didn’t expect to die. It’s not anyone’s fault. Prayer and meditation help me through, as well as my faith in myself. I’ve been an emergency room and trauma nurse for six years now. The work is challenging, but I like the challenge. I like putting my critical thinking in play.

“On a regular work day, I walk in, I see where I’m assigned, but I never know what to expect. Everybody who is admitted into the hospital goes through the ER, so we see everything: patients with strokes, heart attacks. A few days ago, we sent five Covid patients to the ICU within an hour of each other because they all needed oxygen therapy and life support.

“The ER is always busy, but since the pandemic started, it’s been non-stop. We’re short-staffed. Nurses call in sick pretty much every day, so in a shift you could have a turnover of up to 20 patients. My regular week is four shifts of 12 hours, and I’m often asked to take on extra shifts. I’ve stayed on for 16 hours, and other people sometimes stay for 20. Once, I did six shifts in a row. Lately, I’ve set a balance for myself because I need my sanity.

“All the waves of the pandemic have been bad, but this wave is exceptional because it seems like everybody we treat has Covid. They say Omicron is the mildest form, but there are so many cases that hospitals are bound to deal with a high influx of people who are suffering from it. This wave started getting bad last month, when a lot of people came into the hospital with symptoms. Most were mild, so we told the patients to go home and isolate. We’re bracing ourselves because it’s winter, and the risk is higher. I thought to myself, Well, I hope we have enough beds.

“Since then, the hospitals are increasingly crowded with Covid patients. Many more children are coming in with Covid symptoms than we had seen in previous waves—they’re usually unwell with coughs, sore throat, fever. There have been Code Oranges at a couple of hospitals, which means there is a shortage of nurses and too many patients. I won’t be surprised if we get more Code Oranges elsewhere. Earlier this month Durham Region had no ambulances, they called it Code Zero.

“We swab everyone who enters the hospital for Covid, and we just keep admitting more and more patients who are positive. The ICU currently has both vaccinated and unvaccinated people. One relatively young patient, a public health nurse, came in recently because she couldn’t breathe. She was not vaccinated. I immediately put her in a bed and slapped oxygen on her. She was scared. She was like, ‘I should have gotten the vaccine.’

“We had another lady with Covid who hadn’t been well for several days. I don’t think she was vaccinated either. She was placed on 100 per cent oxygen, but all of a sudden she started crashing hard. Every time she made a movement, her oxygen dropped. So we intubated her. At the same time, someone came in with a heart attack, so my partner and I had to split really fast. We had already transferred two patients to the ICU during that shift.

“That kind of triage happens all the time in the ER. We have to decide who is the sickest and needs our attention most. One night we were stabilizing a few Covid patients when a gentleman came in. He’d been found in a hotel room coughing up blood. He was arresting, and he was breathing like he’d aspirated vomit into his lungs—it sounds like nuts and bolts in a dryer. I put him on oxygen while my partner stayed with the Covid patients. Just as I got ready to intubate him, another lady with a history of myocarditis came in with severe chest discomfort, drenched in sweat. So we ran toward her instead, because by that point her heart was arresting. I yelled at the charge nurse to call an ICU nurse to intubate the first gentleman, because his oxygen was dropping. We put the second patient, the lady, on insulin infusions and the strongest life-support medication. I kept running in and out every 10 minutes refilling bags of medication for the woman. I managed to get her relatively stable before sending her to another hospital to undergo a procedure for what ended up being cardiogenic shock.

“If the ICU is short-staffed, they can close down beds, but you can’t do that in the ER. You have extra patients? Sorry, that’s your responsibility today. If you’re at triage, you’re slammed with 50, 60, 70 health cards. You hear monitors going off like crazy, and there are probably going to be codes and arrests going off at the same time. We’re running, we’re short-staffed, there are children screaming and crying. Sometimes people get worse in the waiting room. It’s chaotic.

“We’re now at the point where we’re reintroducing hallway nursing, which is an assignment for a nurse to see patients allocated on a stretcher in a hallway. They stay there, no private curtains, nothing.

“It didn’t have to be this bad. The government should have implemented restrictions a long time ago, when cases started rising in the late hundreds last month. Some essential services need to run, fine, but look at what’s happening at hospitals. We’re probably going to have to do what we did in previous waves, when we transferred patients out of hospitals because there was no room. Will we have to open new areas? And do we have enough staff? Will we have to rely on agency staff? Now we’re making decisions as we go.

“It becomes critical that we don’t get sick and miss out on work. As far as I know I don’t have (and haven’t had) Covid. Outside the hospital, I take extra measures to avoid exposure. When I go home everything goes in a tight bag, I put it in the wash and I go to the shower. I wipe my work shoes, my badge, my bags, the door handles. I still wipe down my groceries even though they get delivered. I don’t really go out anywhere, on my days off. Sometimes I feel like those days aren’t enough, because the only thing I do is catch up with errands or chores. The cycle gets exhausting, and the fatigue comes in waves.

“Some people don’t believe in the disease, or make fun of how seriously some people take it. My message is that the struggle is very real on the inside. Not everyone is going to tell you what they see at work, what they’re going through. So be kind to one another. Many people are going through a really hard battle in their life right now that we know absolutely nothing about.

“It was really difficult for me to bury my father. It was so unexpected, and he was a wonderful person. I urge people not to take this disease lightly, to get vaccinated, to follow public health guidelines. You don’t know what can happen next. You don’t know what life might bring you.”