During last night’s Ontario leaders’ debate—the final televised debate before election day, on June 7—the three party leaders were grappling with a surprising new reality. In the weeks since the previous televised debate, Andrea Horwath’s NDP has surged in the polls, putting her party in a once-unthinkable position: side-by-side with Doug Ford’s Progressive Conservatives, with Kathleen Wynne’s Liberal party a distant third.

As a result, the conservative political weaponry that had been aimed at the Liberals is now trained squarely on the NDP. This debate was Ford’s chance to attack Horwath directly, and it was Horwath’s chance to show viewers that she’s capable of acting like a premier. Here are the night’s six most telling moments. 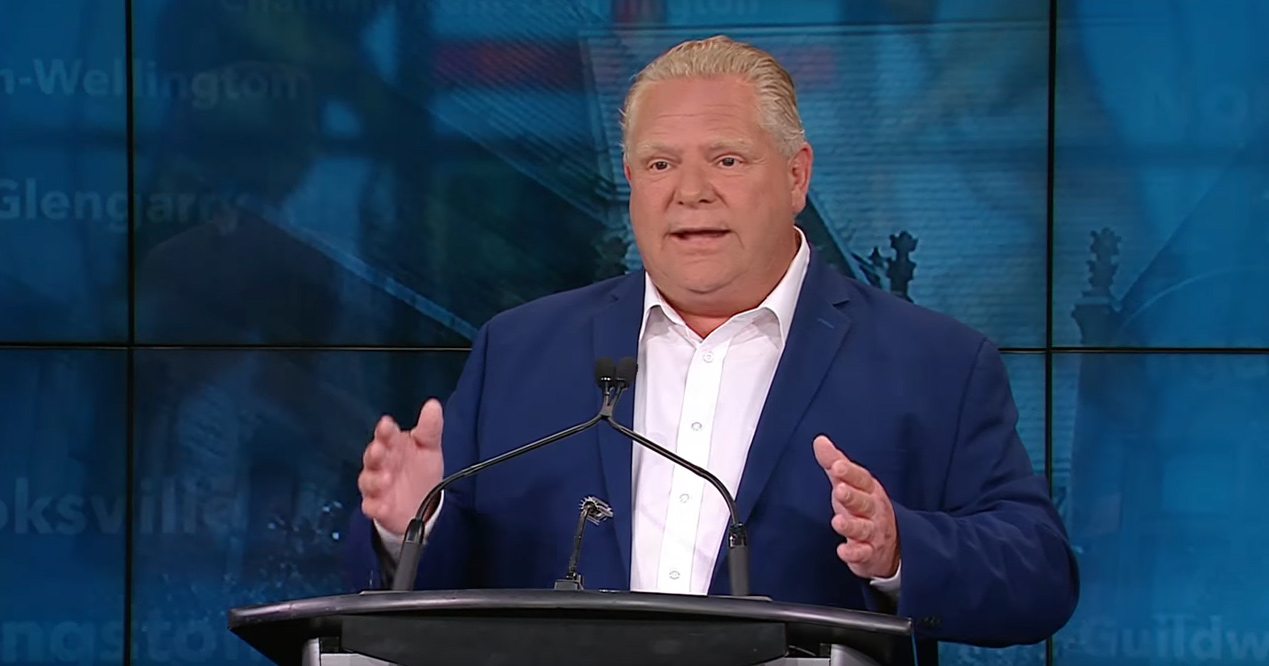 When Doug Ford promised that “a new day will dawn in Ontario.”

The shifting sands of pre-election polling had all three party leaders trotting out the applause lines. Doug Ford seems to have cribbed his from the liner of a Led Zeppelin LP. “I can tell you one thing,” he said. “When our government comes into power, a new day will dawn: a day of prosperity, a day of opportunity and a day of growth the likes of which this province has never seen before.” It sounded like Ford was promising that he, as premier, would personally revolutionize every aspect of Ontario’s economy—which wouldn’t be very conservative of him. 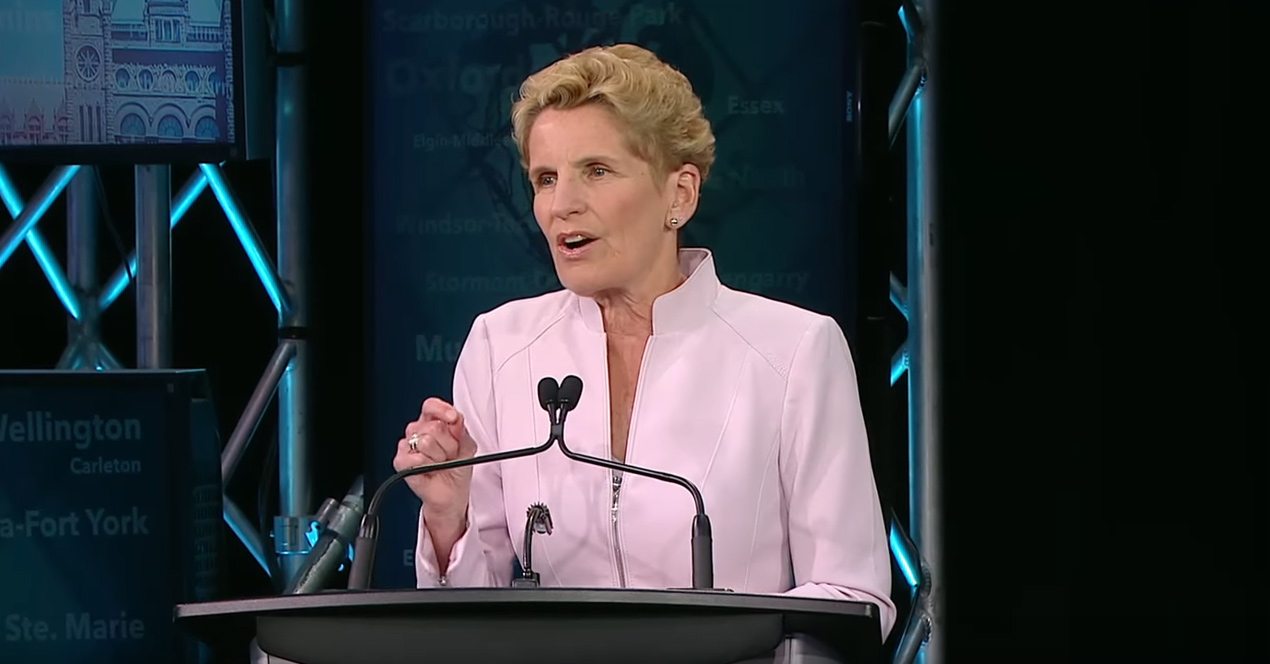 When Kathleen Wynne said “not sorry.”

Kathleen Wynne had a new applause line—although it didn’t get her much applause. “Here’s what I want to say about the last five years,” she began. “Sorry, not sorry. I’m really, genuinely sorry that more people don’t like me, but I’m not sorry about all the things we’re doing in Ontario to make life better.” The new message from the premier is an apparent response to her collapse in the polls. Her campaign has even released a new commercial that uses the same line.

After a series of minor scandals involving PC candidates, the PC party struck back by dredging up an old Facebook post by Tasleem Riaz, an NDP candidate in Scarborough-Agincourt. The post, from 2013, is an image of Adolf Hitler. There’s some meme-like text overlaid on the image, but it’s ungrammatical and hard to understand. The exact meaning of the post is unclear, and Riaz claims she doesn’t recall posting it and says she wouldn’t have done so intentionally, in any case.

Despite the oddness of the whole thing, the Toronto Sun made it into a cover story. And Doug Ford ran with it at the debate. While railing against the NDP’s candidates, he made sure to raise the spectre of history’s most infamous villain. “They have radical activists,” Ford said. “Absolutely radical activists that get their inspiration from Adolf Hitler.” 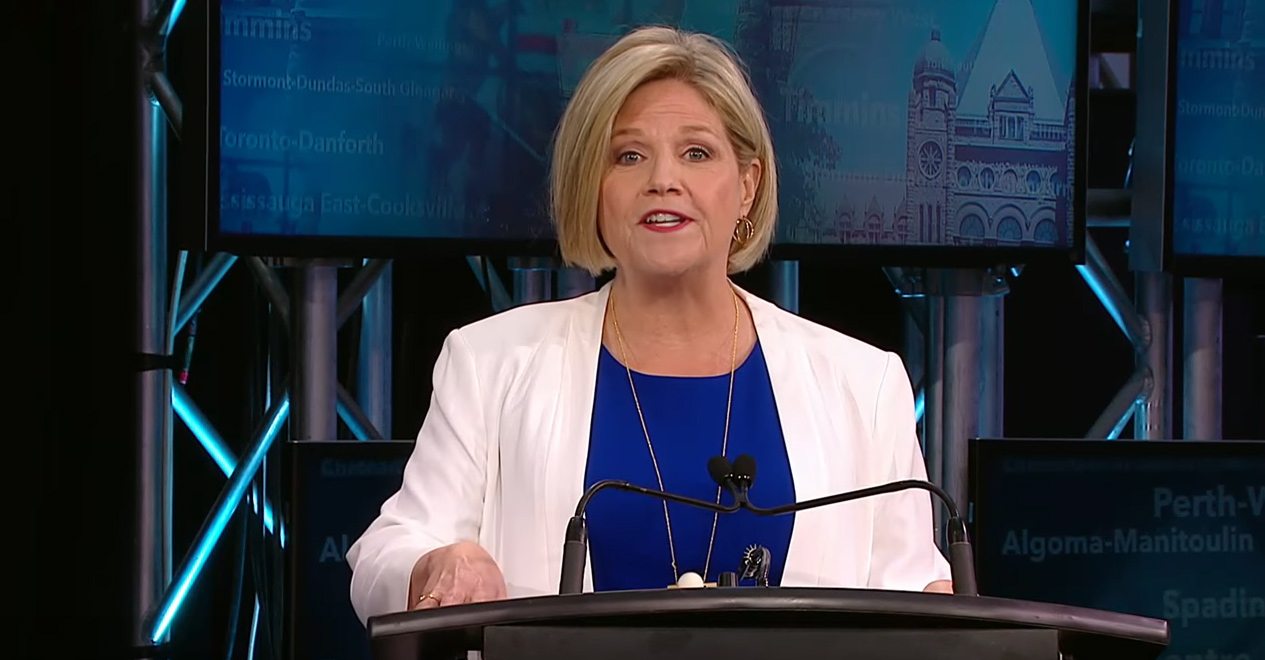 When Andrea Horwath clapped back.

In a sign of the abnormally high level of acrimony in this election campaign, Andrea Horwath had apparently prepared a response to being accused of being in bed with Hitler.

“I want to say straight up that any memes that had anything to do with Hitler is absolutely abhorrent and it’s something that I absolutely reject completely,” she said. “But Mr. Ford’s tabloid mudslinging against my candidates only foments divisiveness and hatred. And it has to stop.” Horwath took the opportunity to remind viewers about the PC party’s scandals, including the one surrounding Simmer Sandhu, a Brampton PC candidate who dropped out of the election after being implicated in the theft of customer data from Highway 407’s tolling system. Sandhu denies any wrongdoing.

When Doug Ford’s evidence of government waste was: “I’ve talked to people.”

In response to an audience question about how the candidates plan to pay for their various campaign promises, Doug Ford went for maximum folksiness. “I can tell you, my friend, everywhere I go, I’ve criss-crossed Ontario and I’ve asked people, do you think the government of Ontario wastes four per cent of every single dollar? I’ve talked to tens of thousands of people, and not one person has ever told me, ‘No. They’re efficient.” It was Ford’s way of saying that he expects to find money to fund his promises—which include a 20 per cent tax cut for the middle class—from within Ontario’s existing budget.

The final moment of the debate may have been its most dramatic. “Well, it’s very simple,” Doug Ford said. “Who do you trust with your investments? Who would you hand your wallet over to?”

“How do you trust somebody without a platform?” Andrea Horwath shouted as Ford continued to speak—a reference to the fact that the PC party has not yet released a full, costed governance plan, despite repeated promises to do so before election day.