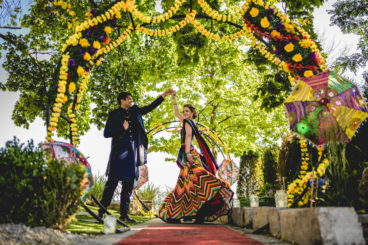 Inside the five-day Hindu-Catholic celebration of high school sweethearts

Vivek Kesarwani and Ellen Bennett, self-described nerds and engineers—he’s in the software industry; she’s in transportation—met in high school in 2009. After their first dance at a semi-formal, Ellen took her sister’s advice and asked Vivek out for coffee. They’ve been together ever since. This past July, they celebrated their wedding with five days of family-filled Hindu and Catholic traditional festivities, complete with henna, dancing, an array of stunning outfits and a reception at the Globe and Mail Centre to cap it all off. Here’s how everything came together. 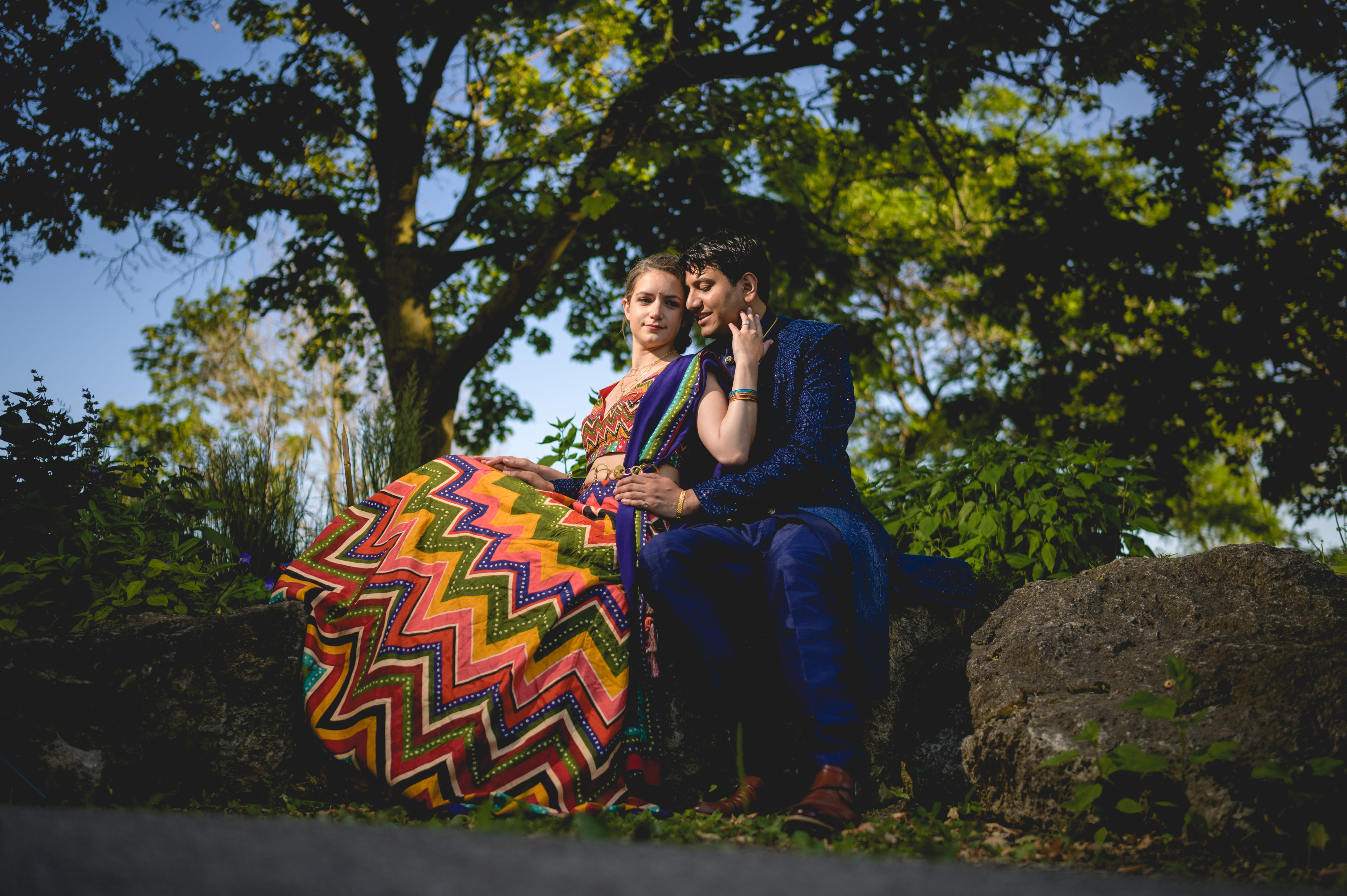 Ellen: At the start, I was more enamored with him than he was with me.

Vivek: We went to the University of Toronto Schools, at Spadina and Bloor. When we first met, I was in Grade 12 and she was in Grade 11.

Ellen: There’s a show the school puts on every year, and Vivek was the co-director that year. I decided to join set design so I could catch some glimpses of him. And then we slowly got to know each other over that year. Eventually, we attended the semi-formal and danced together. Then I followed my older sister’s dating advice and finally asked Vivek out for a coffee. There was a Second Cup close to our school, so it made sense for us to go there.

Vivek: We went during lunch hour. As we were walking back to school, Ellen asked, “So are we boyfriend and girlfriend?” I said yes, and we held hands. It felt special—I had butterflies in my stomach! We had our first kiss underneath the school’s auditorium, in a space that used to be a rifle range back in the ’50s or ’40s, when the high school had a cadet corps.

Ellen: I liked his sense of humour. And he’s a very sweet person. We also have a lot of the same interests—mostly nerdy ones, like video games. 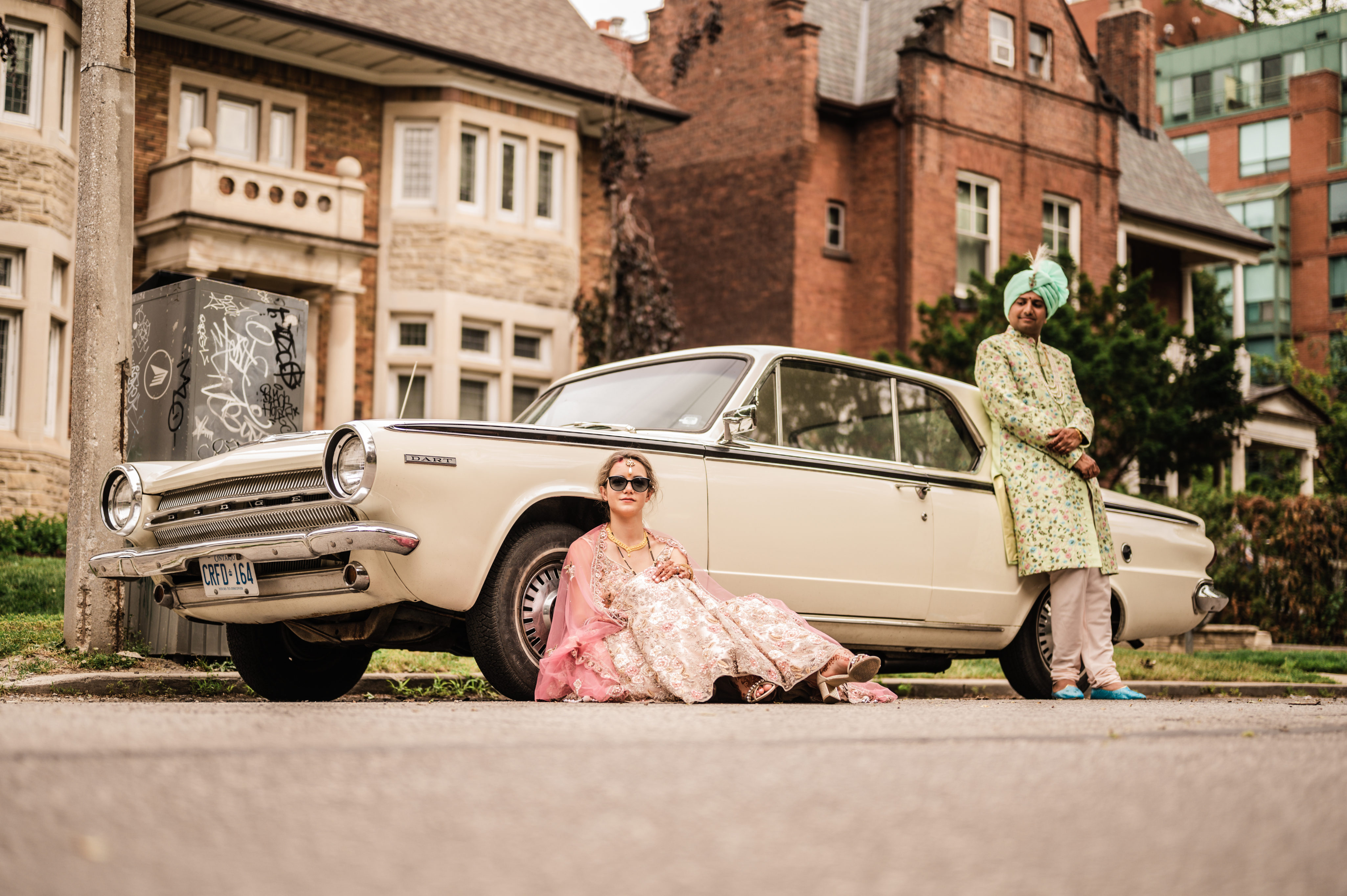 Vivek: After I graduated, I studied engineering at the University of Toronto while Ellen finished Grade 12. The next year, she joined me at U of T, where she studied the same subject. During my first year, I lived at Victoria College, which is in Yorkville and is fairly close to the high school. It meant a lot to me because we were able to continue seeing each other and spending time together.

Ellen: After university, Vivek moved to New York for four years to work at Google. We always say that we did long distance in quotation marks, because there was no time difference and Vivek was back about once a month. And I went to see him every two or three months.

Vivek: I always knew that eventually I would come back to Toronto because Ellen was here. And I knew I wanted to marry her, but I had to get to a certain point in my seniority at work where I could move to Toronto and continue working on the same projects with the same team. Once that happened, in August 2019, I moved back to Toronto.

Ellen: By September, we had moved into a condo together. 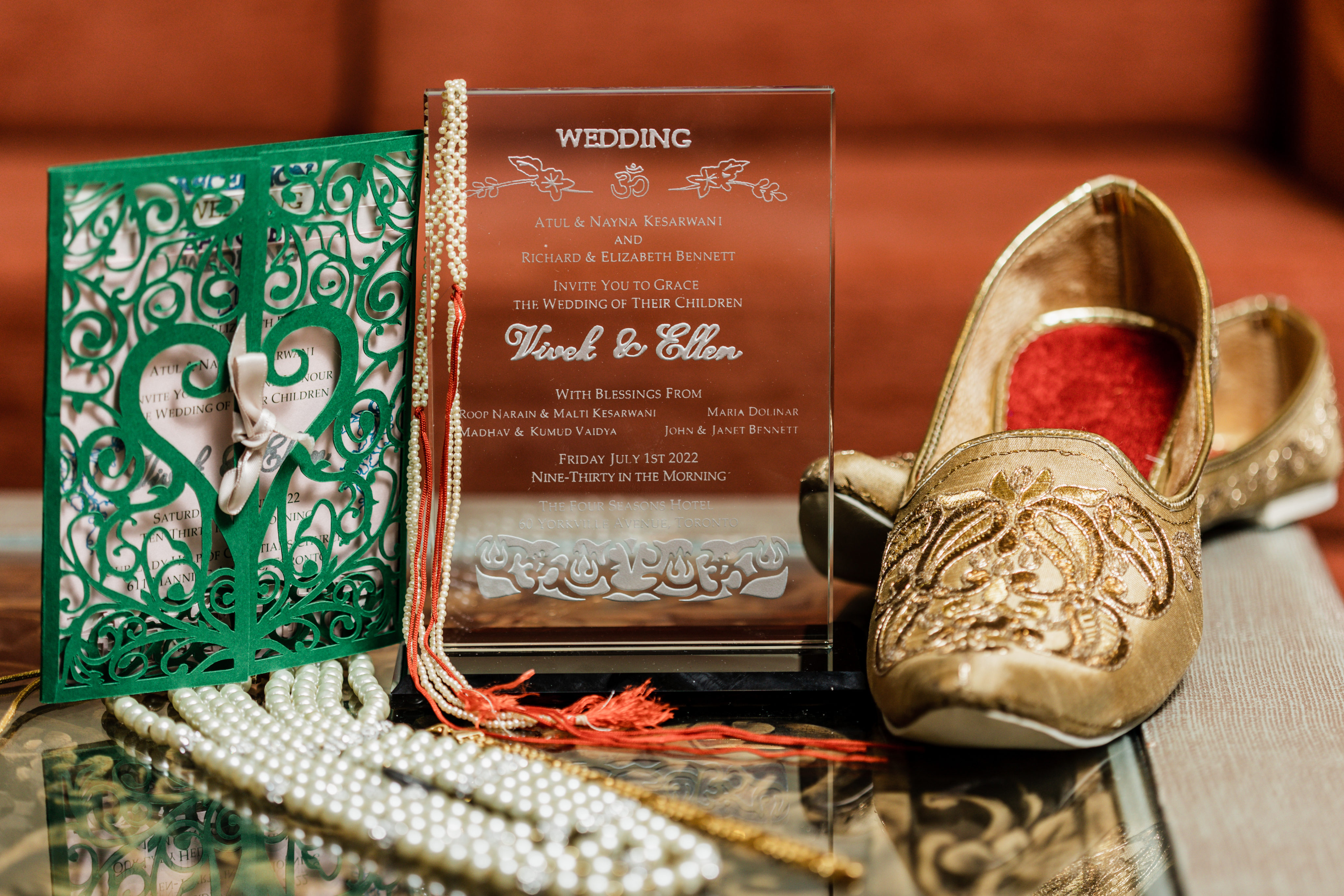 Vivek: We got engaged on our eleventh anniversary. I had the benefit of knowing Ellen’s ring size ahead of time. We’re both engineers, so we each got the iron rings when we graduated. We realized that my iron ring, which is meant to fit my pinky finger, fits Ellen’s ring finger perfectly. My parents helped me get the ring by connecting me with a jeweller that they’d used in the past. I told Ellen that we were meeting up with a friend of ours at the University of Toronto who was doing his PhD. And, while we were there, in front of the convocation hall in King’s College Circle, I got down on one knee and I proposed with a Ring Pop, the candy. Her first words were “Is this for real?” But then I pulled out the real ring and she said, “Okay!”

Ellen: I had no idea he was going to propose. The foundation of our relationship after high school was built during our time in university. That played into Vivek’s decision to ask me there.

Vivek: We thought we would get married in 2021. But, of course, like many other couples, we had to wait out the pandemic.

Ellen: A lot of Vivek’s family lives in the States; there were questions about whether they would be able to make it. It was difficult with all the restrictions, and it was important to us to have as much family there as possible. We made the decision to wait. Thankfully, postponing until this year was the right decision. 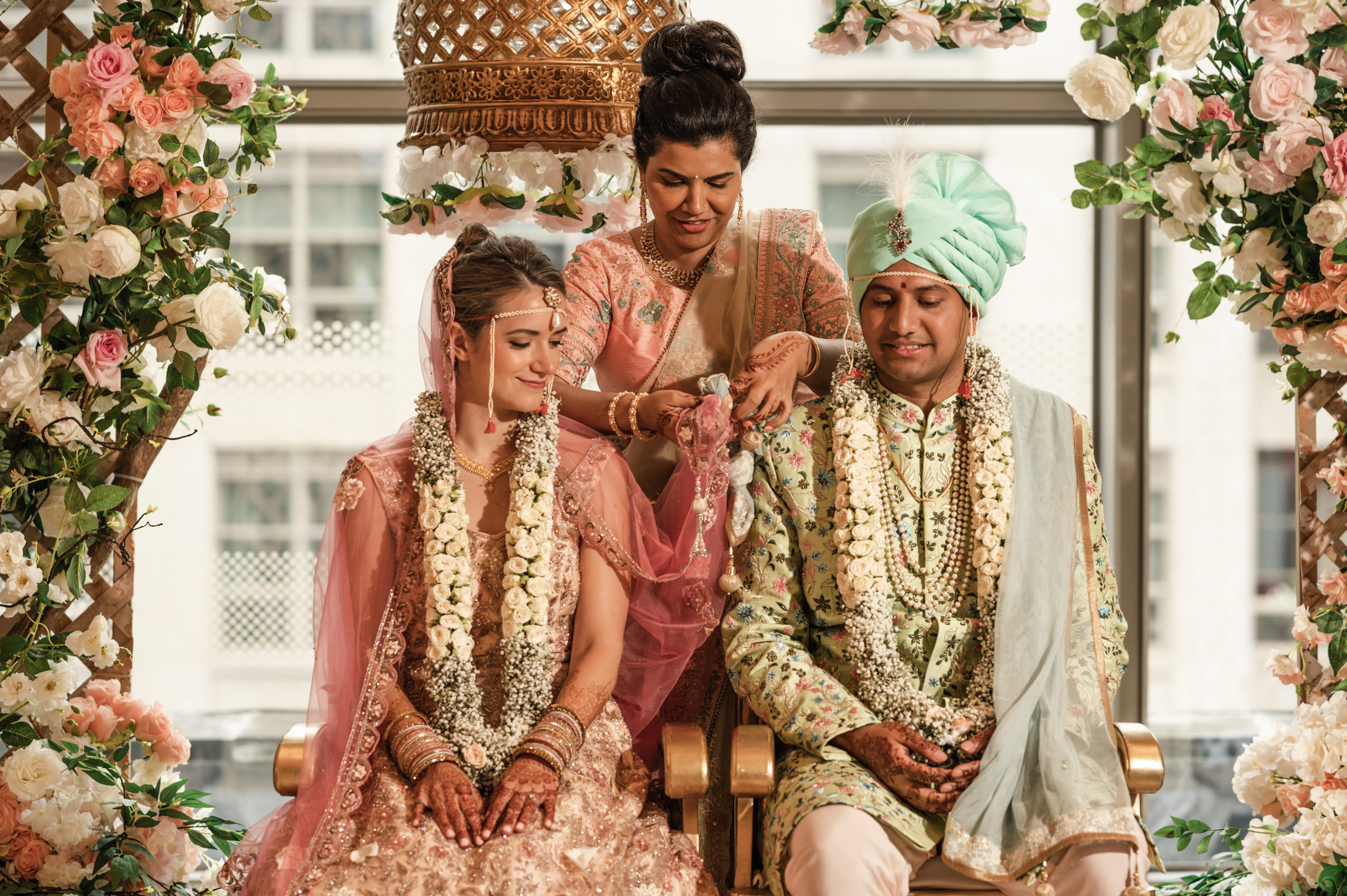 Vivek: With Hindu weddings, there are multiple events, filled with family and friends, to demonstrate how much joy and excitement everyone is feeling. We begin with the Sangeet, a more casual party with a lot of dancing that happens at night. Then there’s the Hindu ceremony, after which we went back to my parents’ place and entered the house for the first time as a married couple. We also wanted to have a Catholic wedding at a Slovenian church to represent Ellen’s mom’s side. Finally, we wrapped up the week with a reception.

Ellen: We celebrated for a week! It felt like a lot. We also wanted to have a lot of personal touches on each of the days, and we got to do that. We made our invitations, for example, and put in some nerdy references to movies and video games we like. We had the Harry Potter lightning bolt and the Super Mario 1-up mushroom. 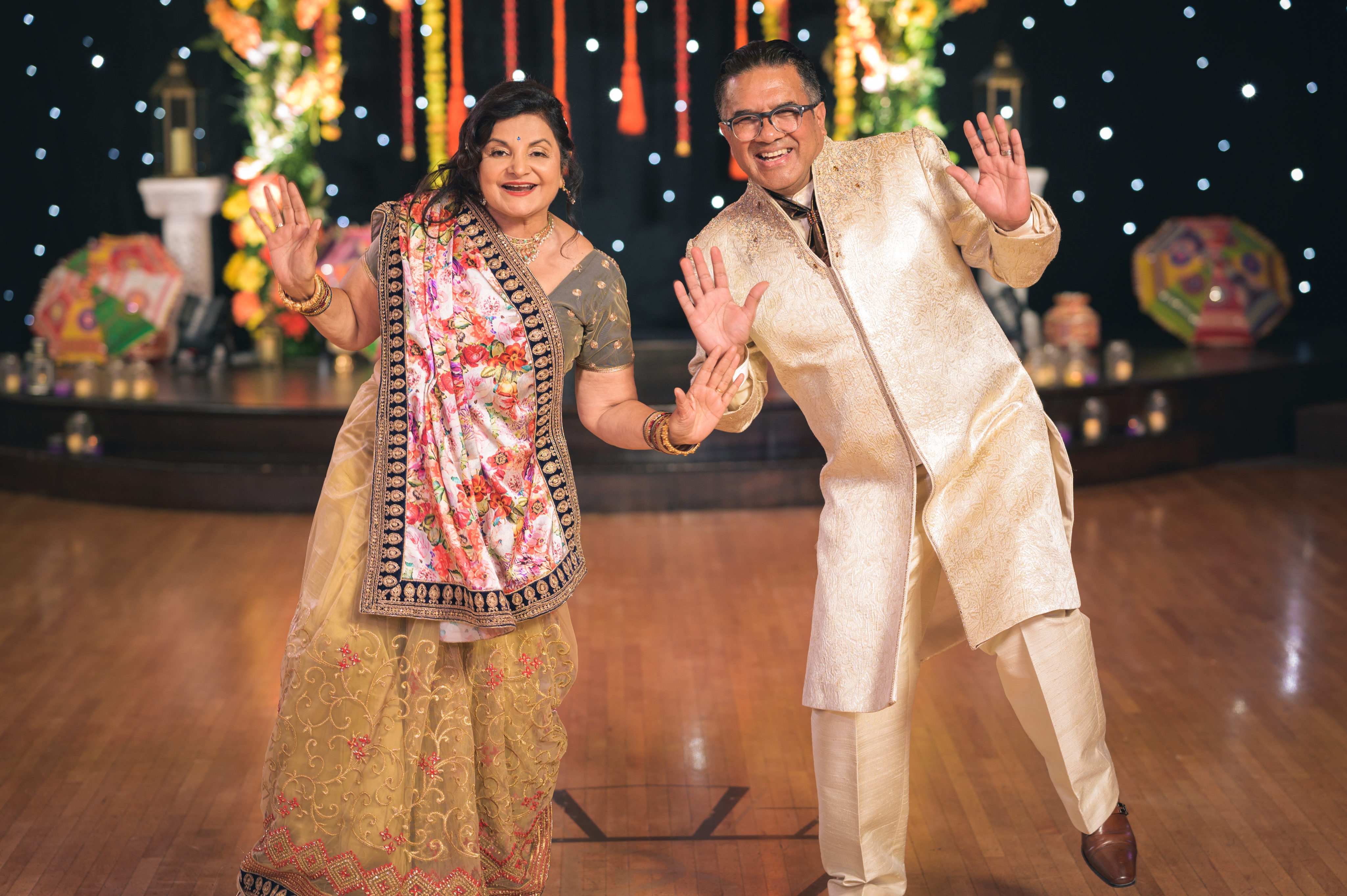 Vivek: The Sangeet took place on the Tuesday of the wedding week, at Palais Royale. My aunts and uncles and parents put on choreographed dances and skits. My siblings and cousins did a whole multimedia performance where they presented our relationship as a video game, going through the different stages of our relationship, and they interspersed that with dances from movie soundtracks. Ellen’s side performed an energetic dance to “Spice Up Your Life” by Spice Girls. My sister did an amazing job putting the program together. Ellen’s favourite band is The Arkells, so we danced to “Years in the Making,” which is a great song for two people who’ve been seeing each other for 13 years and are getting married.

Ellen: The next day, we had the Mehndi ceremony in our condo building’s party room. There, a henna artist applied henna to family members’ hands as a symbol of well wishes for health and prosperity. It was a fun way to hang out with our families and get my bridal henna applied, which takes hours. Vivek got the groom version as well. We ordered food from a bunch of our favourite places, like General Assembly Pizza and Kibo Sushi. 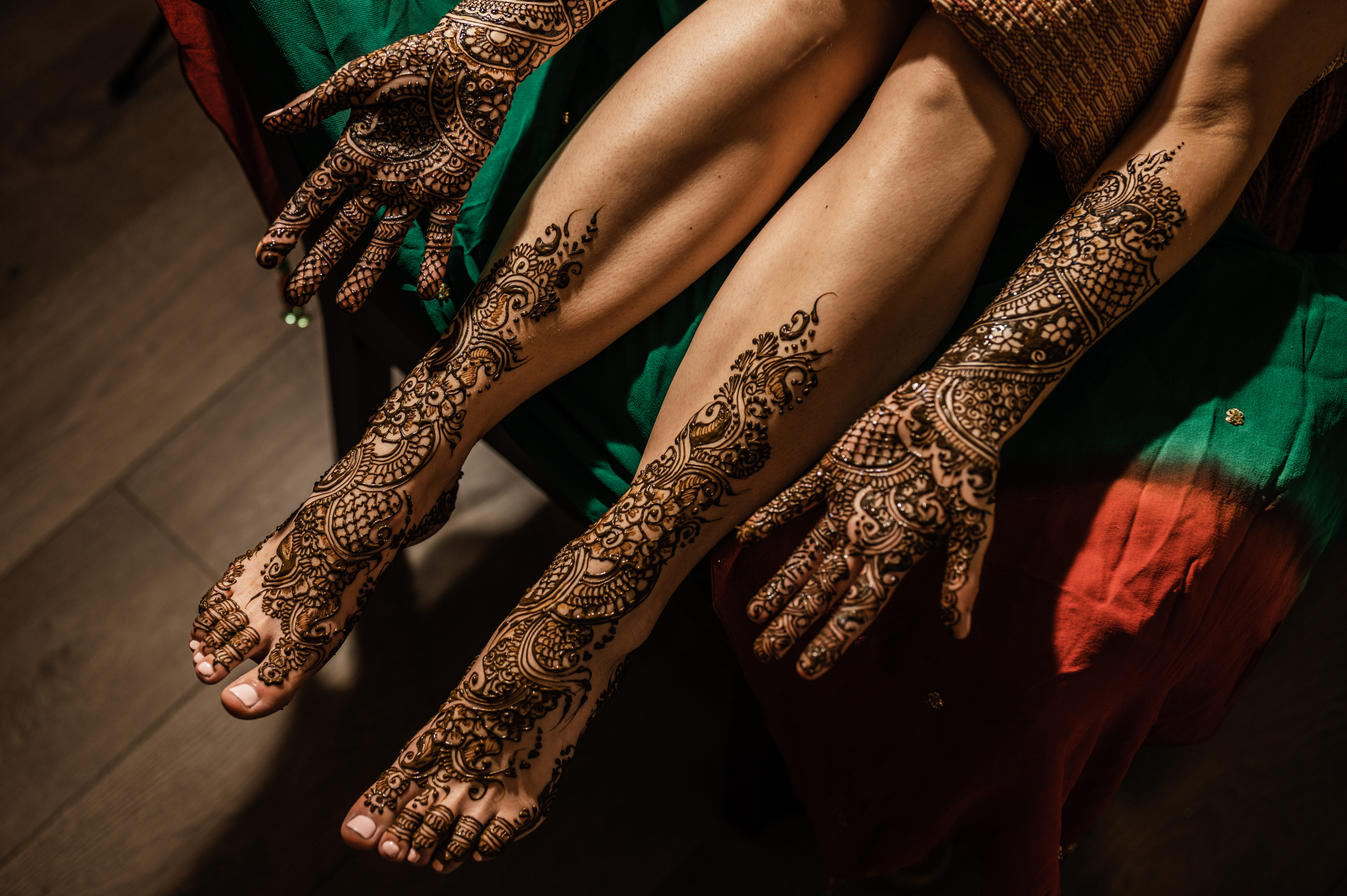 Ellen: For most of the events, I wore a lehenga—a type of Indian dress with a blouse, a skirt and a dupatta scarf. Lehengas are easy and comfortable to wear, but the one I was wearing for the wedding itself was quite heavy from all the embroidery and bling. Thankfully, I was able to sit for most of the ceremony. My wedding lehenga was a blush pink, covered with flowers and little pearls. I felt like a princess! At the reception, I wore an Indo-Western gown with a lot of beading. And then, for the Catholic ceremony, I wore the dress my mom had made herself when she got married. She modernized it by replacing the puffy sleeves and updated the bodice. I had seven outfits in total! 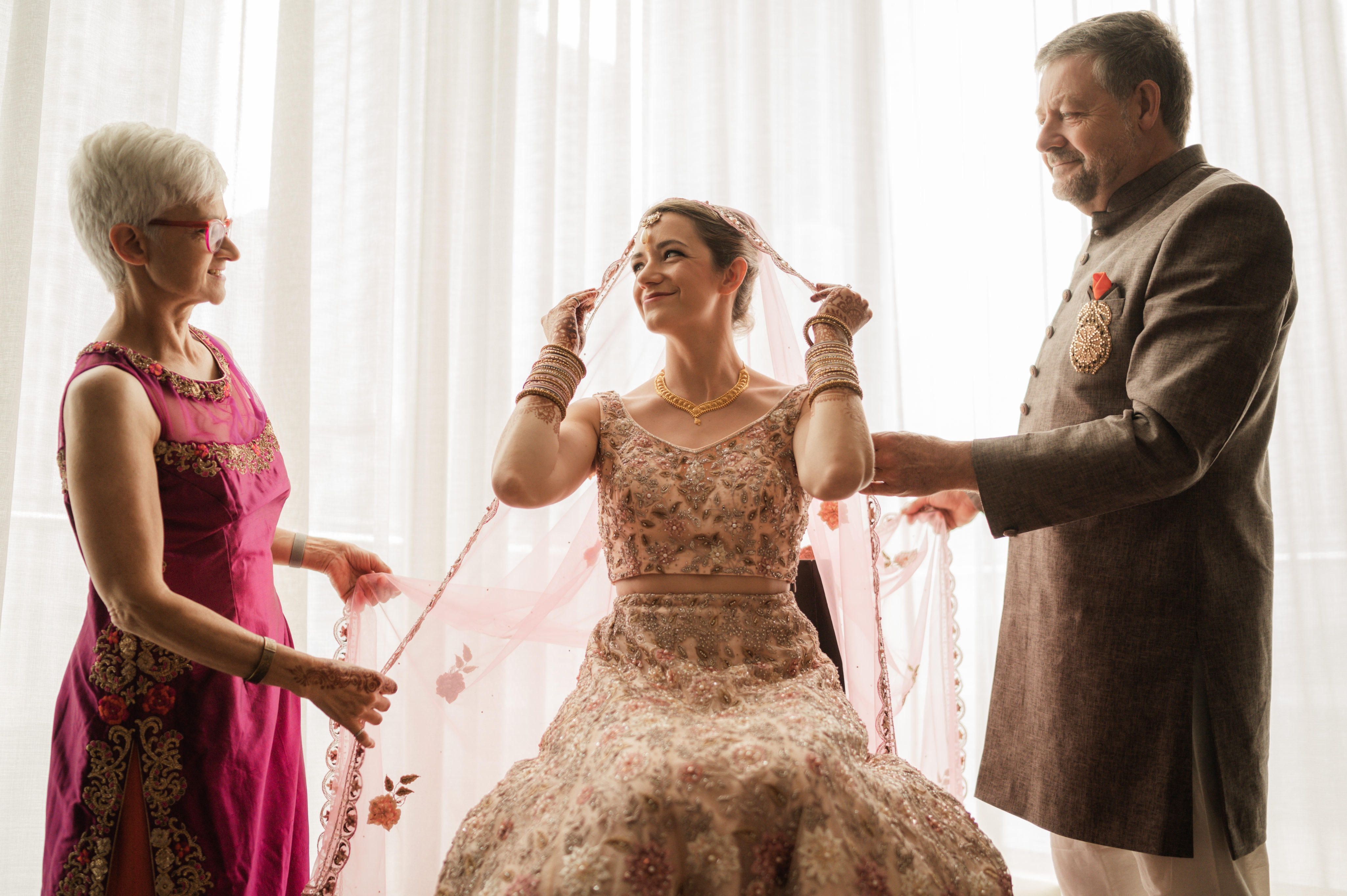 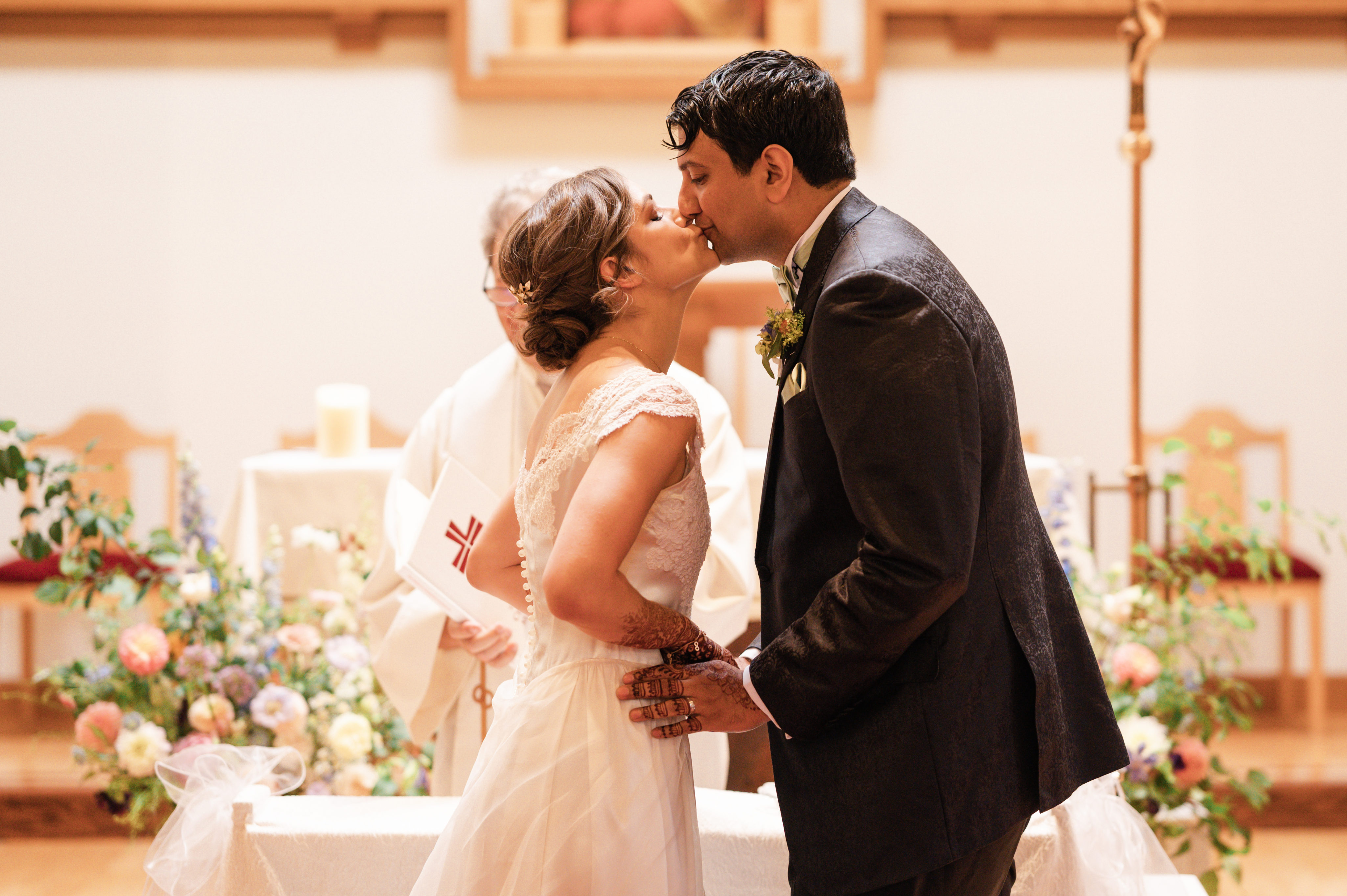 Vivek: One of my favourite moments happened on the last day. Ellen and I went to the reception by streetcar. It was just the two of us and the photographer who took our photos. It was really romantic.

Ellen: We wanted to have the reception somewhere that felt very Toronto. So we chose the Globe and Mail Centre. The view took our breath away. And I loved that we arrived on the streetcar. It was Vivek’s idea. It gave us a quiet moment to have together, right before the reception, to wrap up a week of festivities. It was our first chance to sit together by ourselves all week and just take it all in. 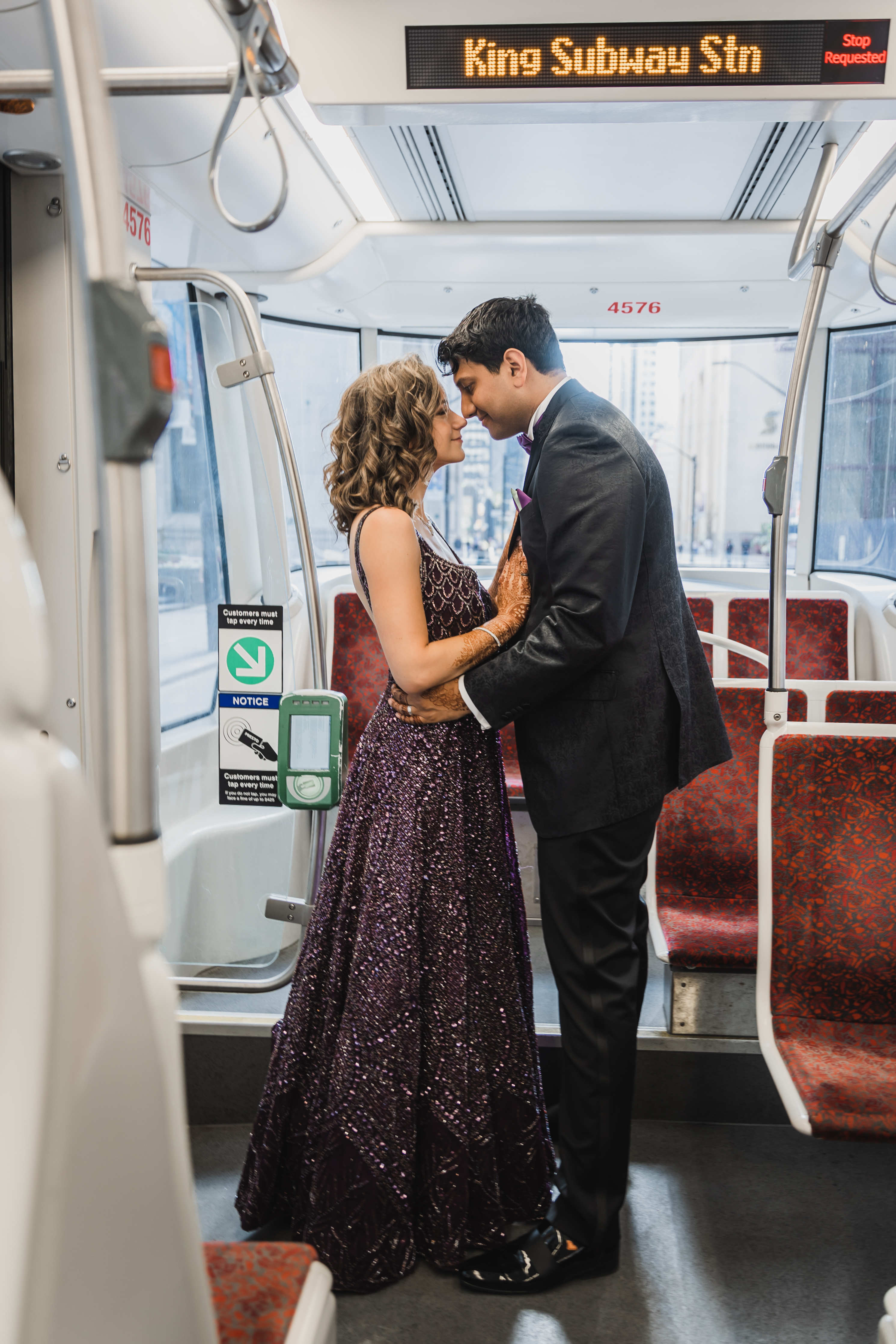 Vivek: Our first dance at the reception was to the theme song “Don’t Think Twice” from the video game Kingdom Hearts. The dance was a really special moment between us.

Ellen: We were just focused on each other. Everyone else was blurred out for three minutes. 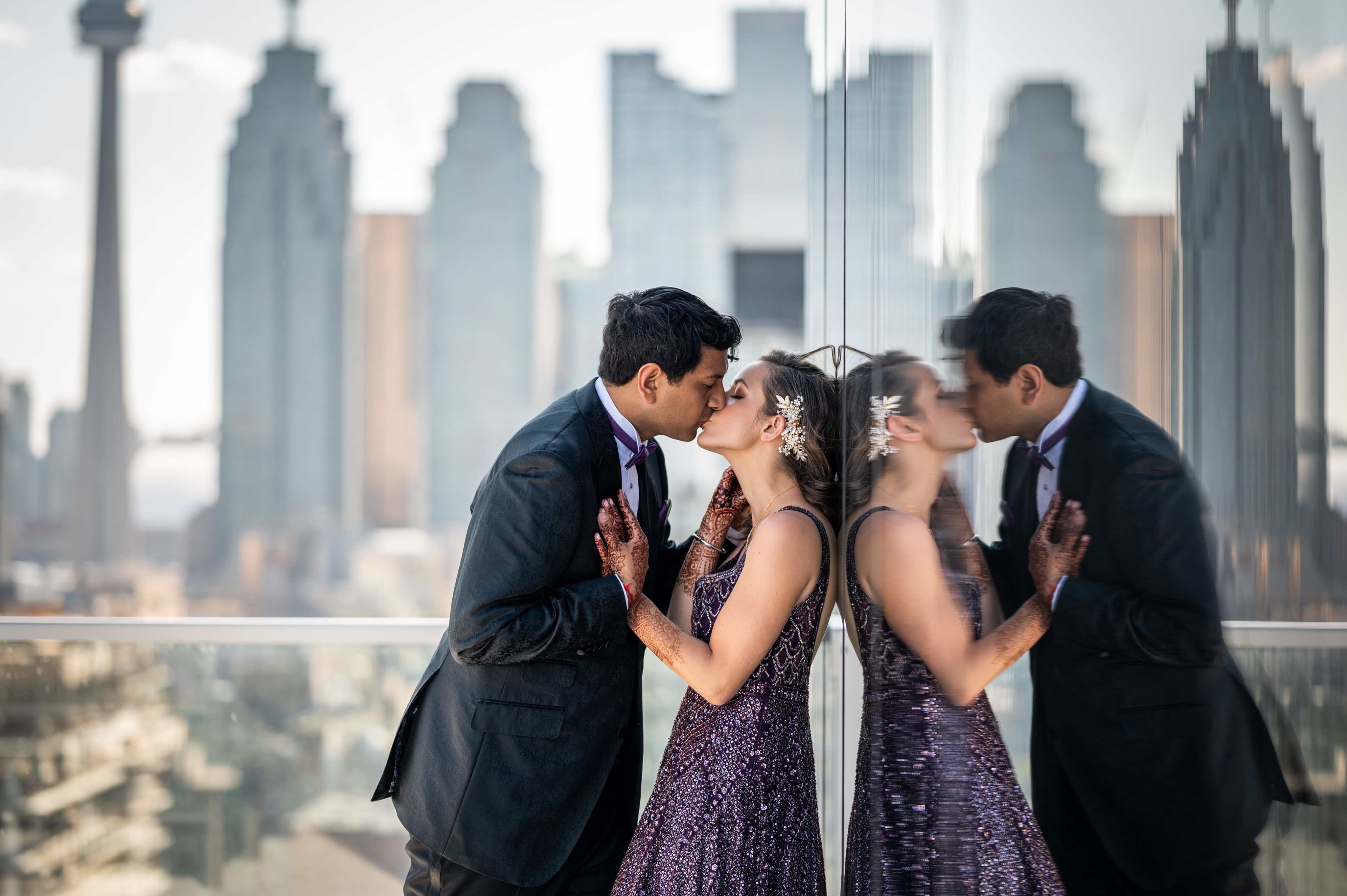