His partner, The Weeknd, already blazed the trail 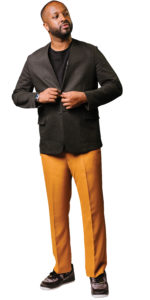 First things first—how do you pronounce Hxouse? Ex-house? Hex-house?
The “x” is silent. It’s just “house.” When we started throwing names against the wall, House was a name that kept coming to us. But how do you take something as basic as House and make it distinct? You add XO, which is the name of The Weeknd’s label and crew. The kids know what XO means to the community.

Hxouse, which is located on Queens Quay East, is usually described as an incubator for creators, but how would you describe it?
When XO’s creative director, La Mar Taylor, was coming up, he had to sneak into OCAD at night to work on album art, which is why he wanted to create a safe haven for artists. I wanted to focus on scaling up and mentorship so that young creators can learn to build an enterprise and live off their skills. Luckily, Hxouse became both. We like to think of it as an X-Men school for young creative entrepreneurs.

When did you first hear about The Weeknd?
I was living in D.C. and was driving a friend’s car, and he had The Weeknd’s House of Balloons mixtape on his iPod. It had eerie, dark undertones. Sonics I’d never heard before. I asked who it was. He said, “You don’t know them? They’re from your neighbourhood, from Scarborough.” I was shocked. When I was living in Scarborough, there was no such scene to speak of.

You’d left Scarborough years earlier to go to Wayne State in Detroit, correct?
I assumed there was nothing left for me. Scarborough looked the same as it had when I’d arrived from Somalia 20 years earlier—no downtown, no evolution, just one mall and endless sprawl.

What led you from Detroit to D.C.?
Politics. When I was a kid, my dad forced me to watch House of Commons debates and C-SPAN so I could learn English. When I went to Wayne State, I studied political science. Then I interned for a congressman, John Conyers Jr., and later taught in D.C.

Did you have political aspirations?
Some, but the more I got into that world, the more I felt there was a wall there. So I went back to school and got a degree in PR, interned at the NBA and started my own marketing and PR firm, Influencers PR.

How did you meet The Weeknd?
A friend of a friend introduced me to people in The Weeknd’s crew and we started running into each other at clubs and Raptors games when I was in the city. We started hanging out, and I joined him on his first U.S. tour in 2012. I was impressed by his vision and attention to detail but also by how low-key and approachable he was. Even if he knows that you know who he is, he’ll introduce himself. He’s a special guy—full of life but not full of himself, and he’s taught me how to stay humble.

And he became your client?
Not exactly. As the relationship grew, I just supported him in any way I could. One day, La Mar tweeted that he wanted to build a facility for young creative entrepreneurs. I had drafted a proposal for something similar years earlier, so I dusted it off, added La Mar’s vision and told him I’d meet him on the Starboy tour. We toured incubators in Berlin, London, Paris, Hong Kong and Tokyo and learned what made each one special.

What are you guys teaching these young people at Hxhouse?
We designed a program that highlights the journey creators go through, from ideation to coming up with the product to IP, across all creative fields—music, fashion, photography. We just graduated our first class.

How involved are The Weeknd and XO in the day-to-day stuff—the classes, the panels?
Very. Supporting, mentoring, providing direct access. It’s unreal. It’s been so rewarding to see that they care more about nurturing talent than building their own careers. This isn’t just The Weeknd and La Mar donating computers. It’s about them donating attention, respect, dignity—all the stuff that me and La Mar and The Weeknd had to find elsewhere. It’s about making young people believe they can achieve their ideas at home—they don’t have to go abroad. It’s emotional because every day, we look at each other and go, “Man, I wish we’d had this.”