Doug Ford campaigned on scrapping Kathleen Wynne’s sex-ed curriculum and once in office, he did just that, rolling things back to 1998. But outcry over removing LGBT rights, consent, cyberbullying and gender identity from the lesson plans prompted the Conservative government to backtrack, promising to retain some parts of the revised curriculum. Where that leaves students, just a few weeks away from back-to-school day, is still unclear. That vagueness prompted a protest at Queen’s Park last weekend, where we caught up with the protestors and asked them why sex-ed matters: 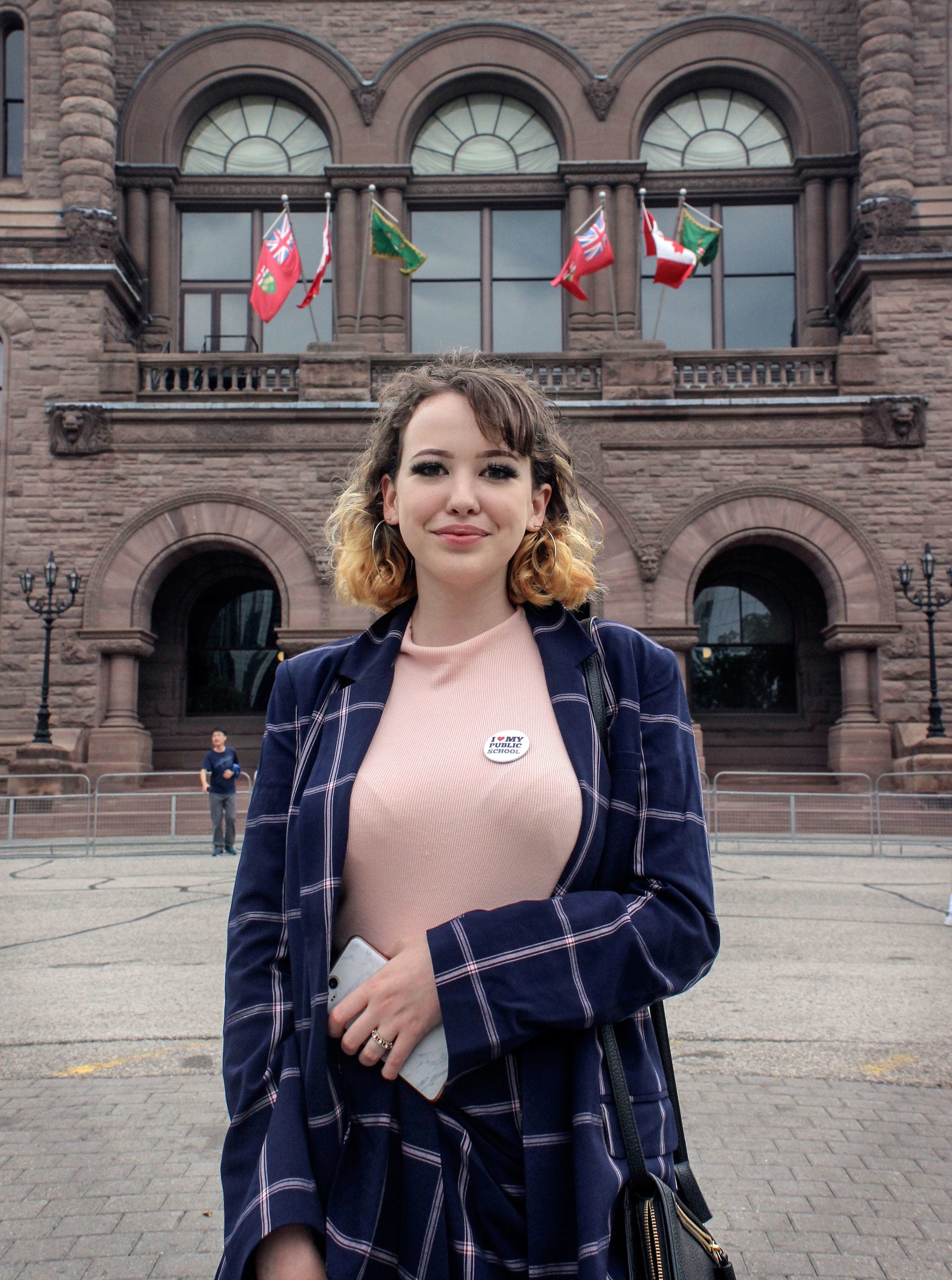 Rayne Fisher-Quann, 16
Head Organizer for March For Our Education
“I think this curriculum matters to everybody, whether they know it or not. Based on my experiences as a young woman and experiences my LGBT friends have had, I know that sex-ed can save lives. If I’d been taught the 2015 curriculum when I was in elementary school, I have no doubt things would be different for my generation. I have 300 guys blocked on my Instagram because they don’t know what consent is; I’ve been sexually harassed while walking down the street more times than I can keep track of. If those people learned what “no” means and why it’s important to listen, I would feel a lot safer. I want kids to feel safer walking down the streets than I do.” 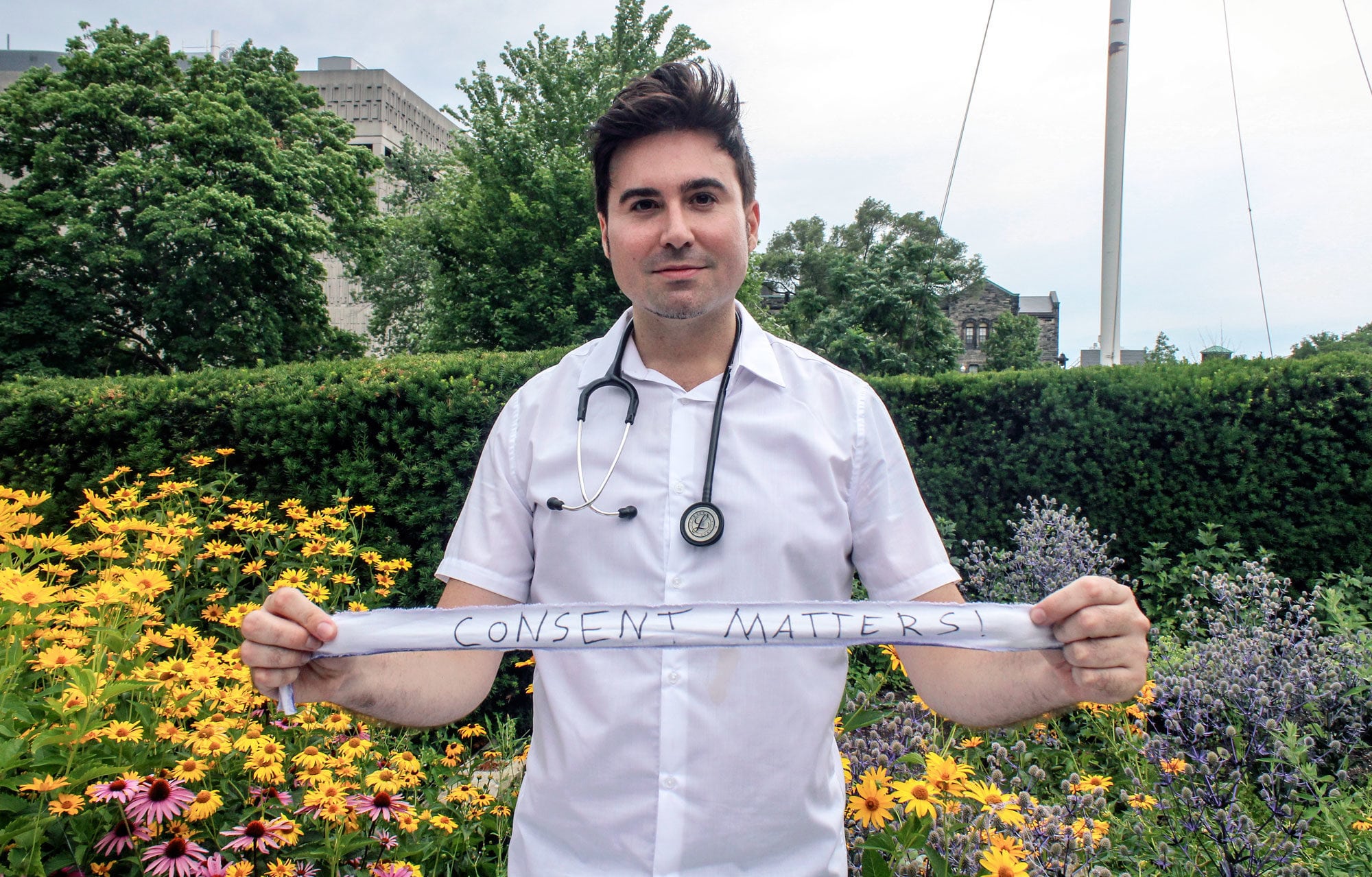 Tim Misener, 34
Nurse
“In 1998, I was dragged out of the closet at age 14 in rural Ontario. I was bullied, but I forgave those people because they didn’t have this curriculum to teach them otherwise. My teenage self has been screaming since I heard about the repeal. The majority of Ontario is open minded. We’re taught to be inclusive and it’s built into our human rights code not to discriminate against sexual orientation. It doesn’t make sense that the same way of thinking won’t apply to our school curriculum.” 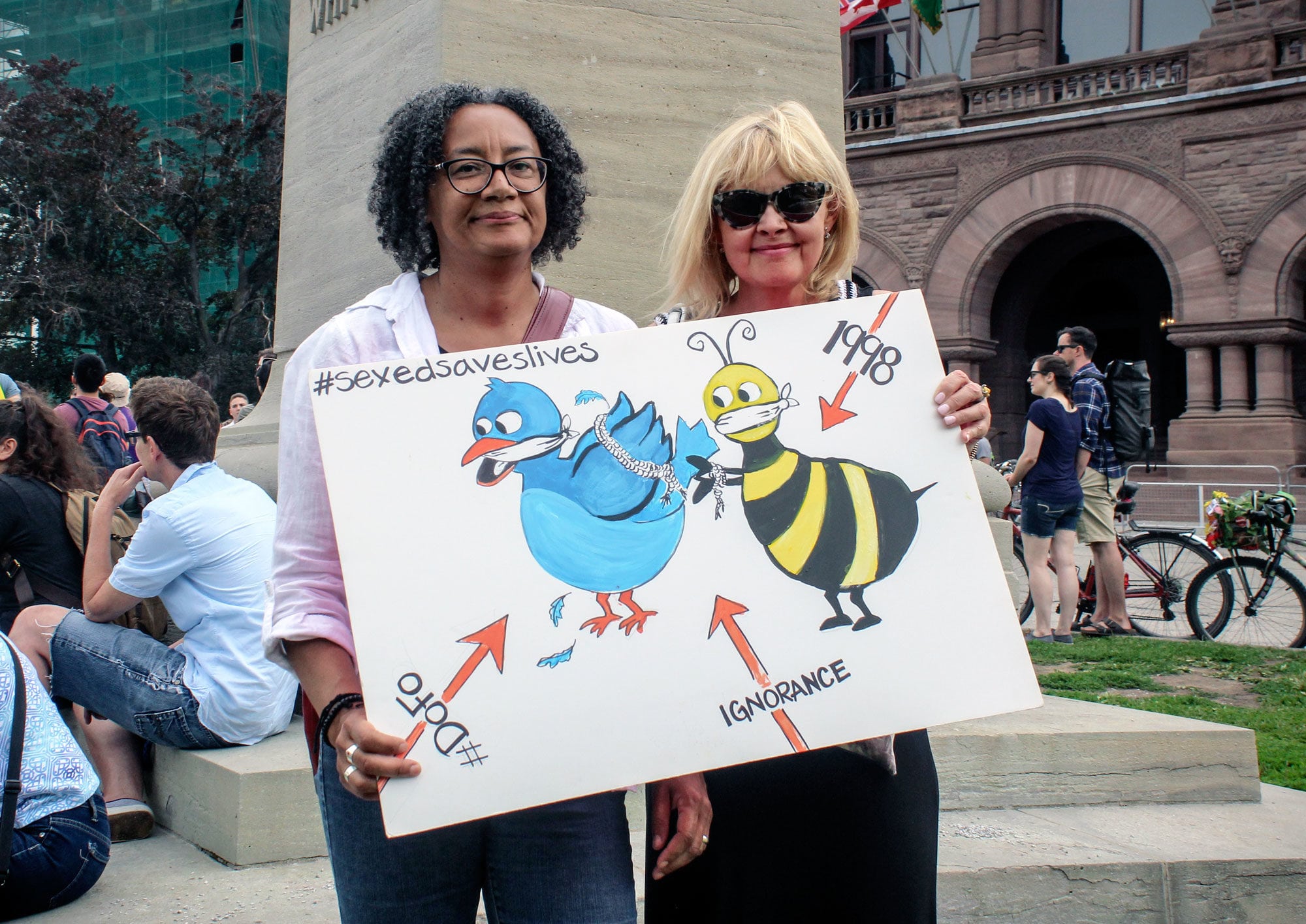 Roseatta Lung (right), 54
Personal trainer and artist
“When we met, we weren’t even allowed to be married and couldn’t share insurance benefits through work. Things have changed so much and they have to keep moving forward for the next generation. Kids need to be taught representation in school, it’s essential. It wasn’t enough to click “like” and retweet things… we had to come here to be a visible part of the movement.”

Samantha Williams (left), 54
Project Manager
“It’s so important for kids to know the correct names of their body parts, and that’s a big part of the new curriculum. More important, it teaches kids that if somebody touches them and it doesn’t seem right, they should tell an adult. What happens when they’re not taught that anymore?” 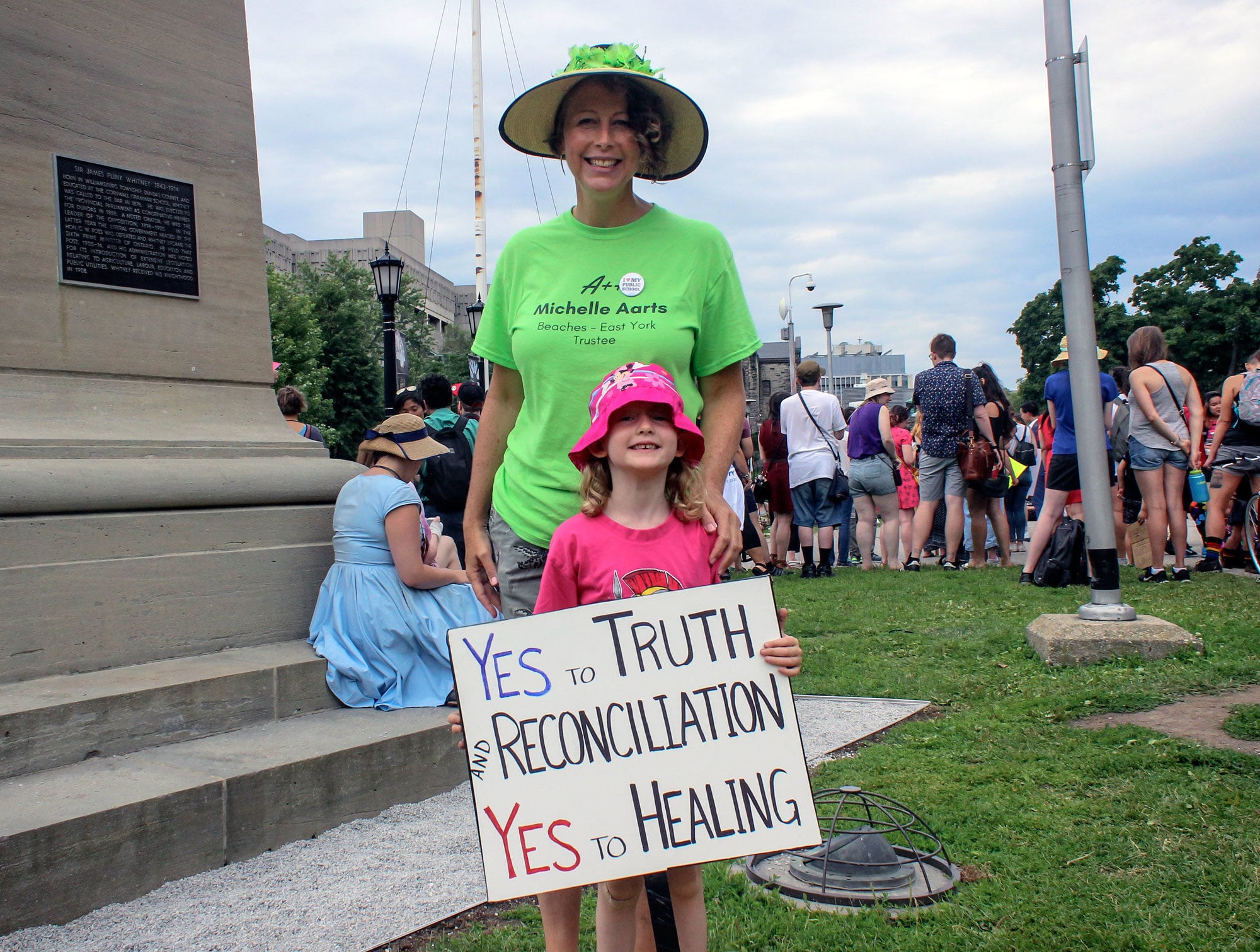 Michelle Aarts, 47
Education advocate/mother
“Getting a good education involves more than learning how to read, write, and solve math problems. Kids need positive reinforcement about their varying identities and their body image. Even the smartest kinds who don’t feel good about themselves will have trouble succeeding in the world.” 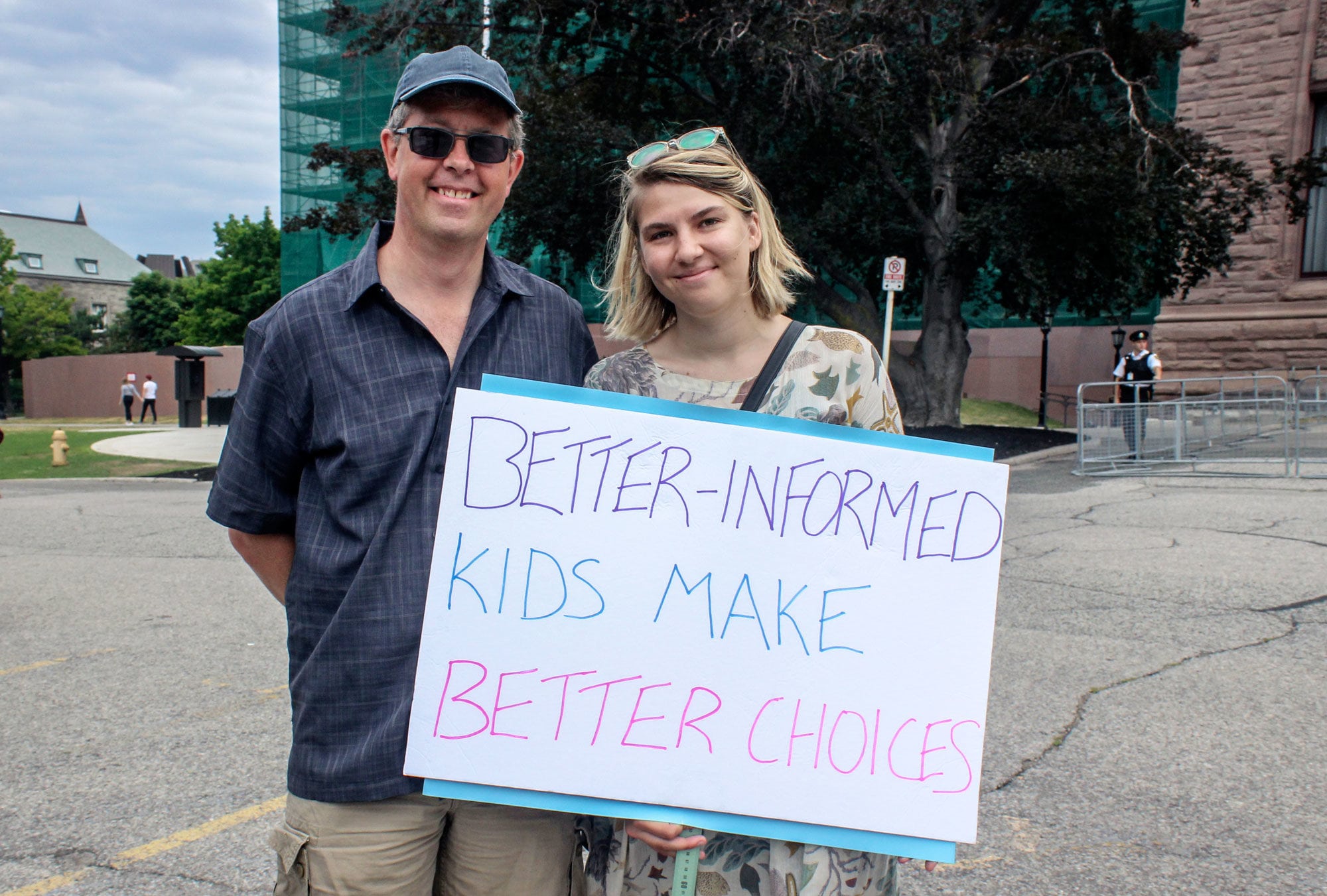 Allegra Netten, 21
University of Toronto student
“We didn’t get sex-ed because my grade five teacher was too afraid to talk about that stuff with us. I’m queer, but I didn’t fully understand it until after I graduated high school because I was never taught about gender identity. All of my friends are queer, too. It took most of them just as long to figure that out because this silence around sexuality meant no one was talking about it. I’m happier now than I’ve ever been, but it would’ve been great if I could have felt this way when I was younger.”

John Bowker, 50
Researcher/uncle and father
“I have two daughters, so this is about them. The direction Doug Ford wants to take sex-ed is unsafe, and I don’t think it’s what the majority of parents or students want. When I was growing up, playgrounds were filled with hate, transphobia and homophobia. If kids didn’t confirm or act a certain way, they’d get a black eye. I don’t understand how our government could welcome a return of this type of behaviour. The thought of my own daughters growing up in a world where consent is dismissed and where gender dictates how you should act terrifies me.” 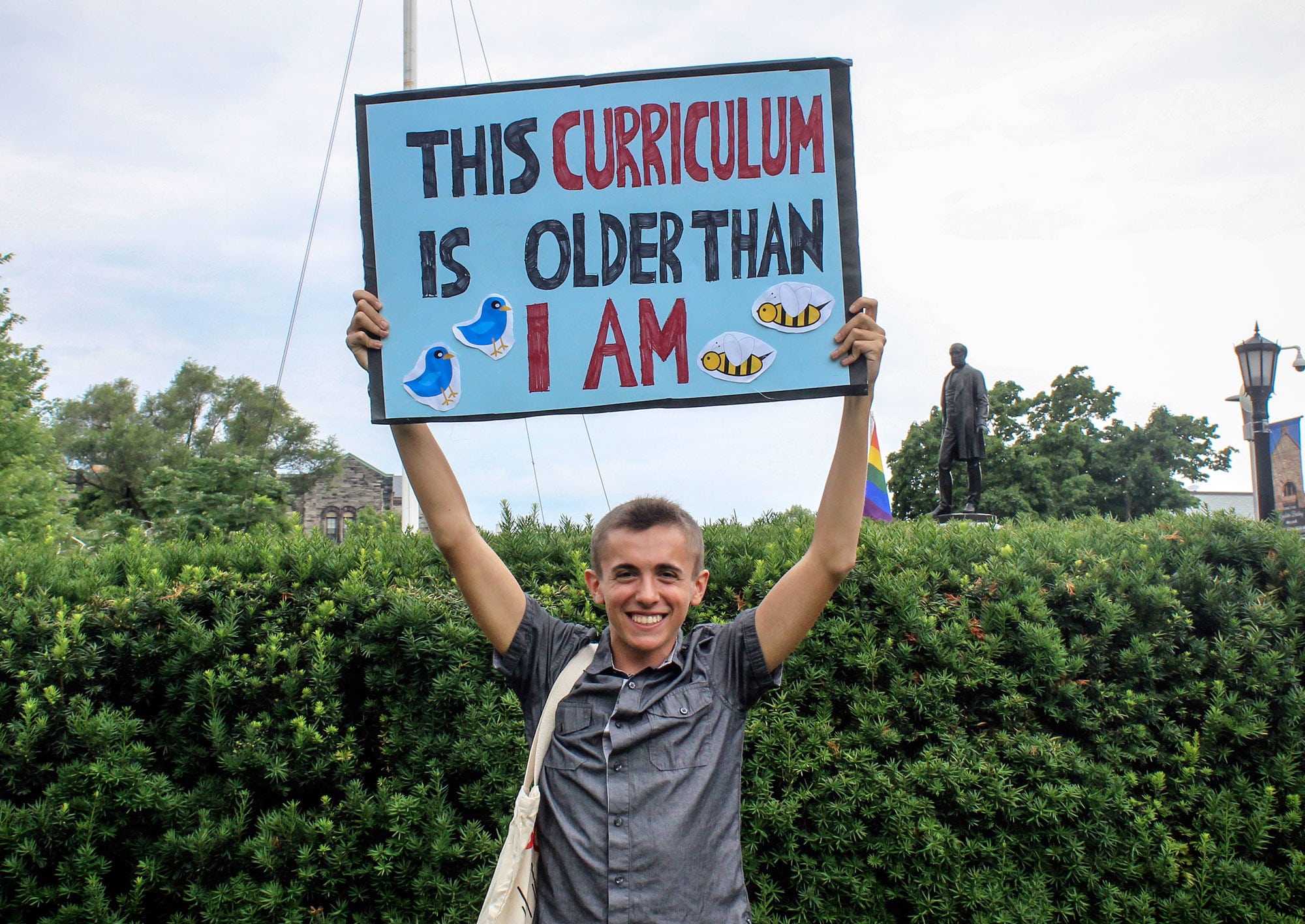 Sam Shepherd, 18
Student
“If you actually read the new curriculum, it teaches important things like boundaries, emotional safety and mental health. This is the type of thing we all need to be learning about, regardless of our religious or political backgrounds.” 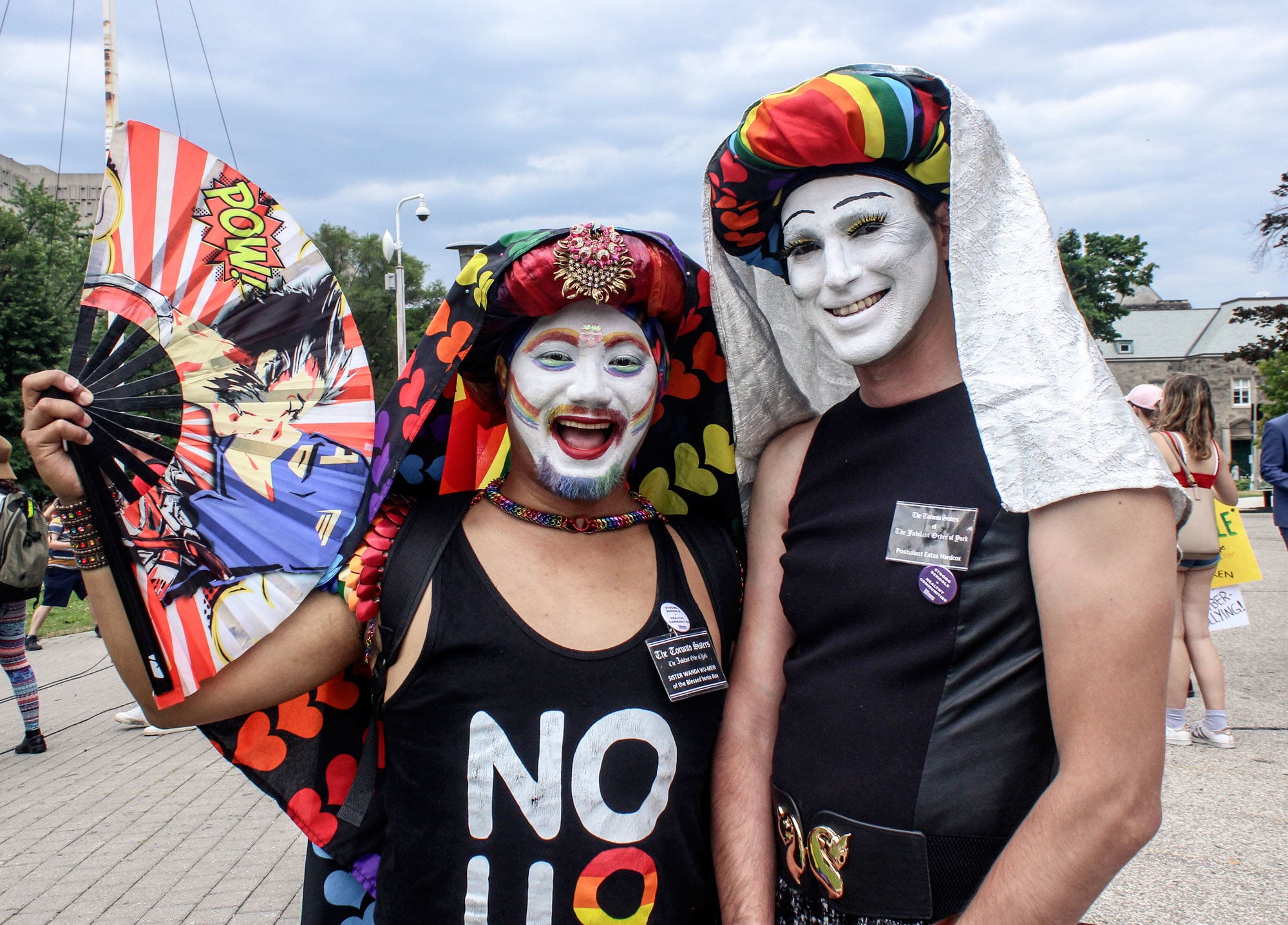 Sister Wanda Wu-Mein (left), 37
Chair, The Toronto Sisters of JOY
“I went to an all-boys Catholic elementary school and high school and I was bullied a lot because I’m gay. People told me I was too girly, that I wasn’t a “real man”—all of the meanest things you can imagine. When it came time to start sex-ed, all I remember learning is the names of the body parts and then seeing an X-ray style video of a man and woman having sex. There was no talk about sexual orientation, no conversation about gender identity. It would have been invaluable for me to have been told that it’s okay to be gay and that I wasn’t going to go to hell for it.  I think the new curriculum helps kids understand that their words have consequences; that they can take someone’s self-esteem away and cause detrimental, lasting effects.” 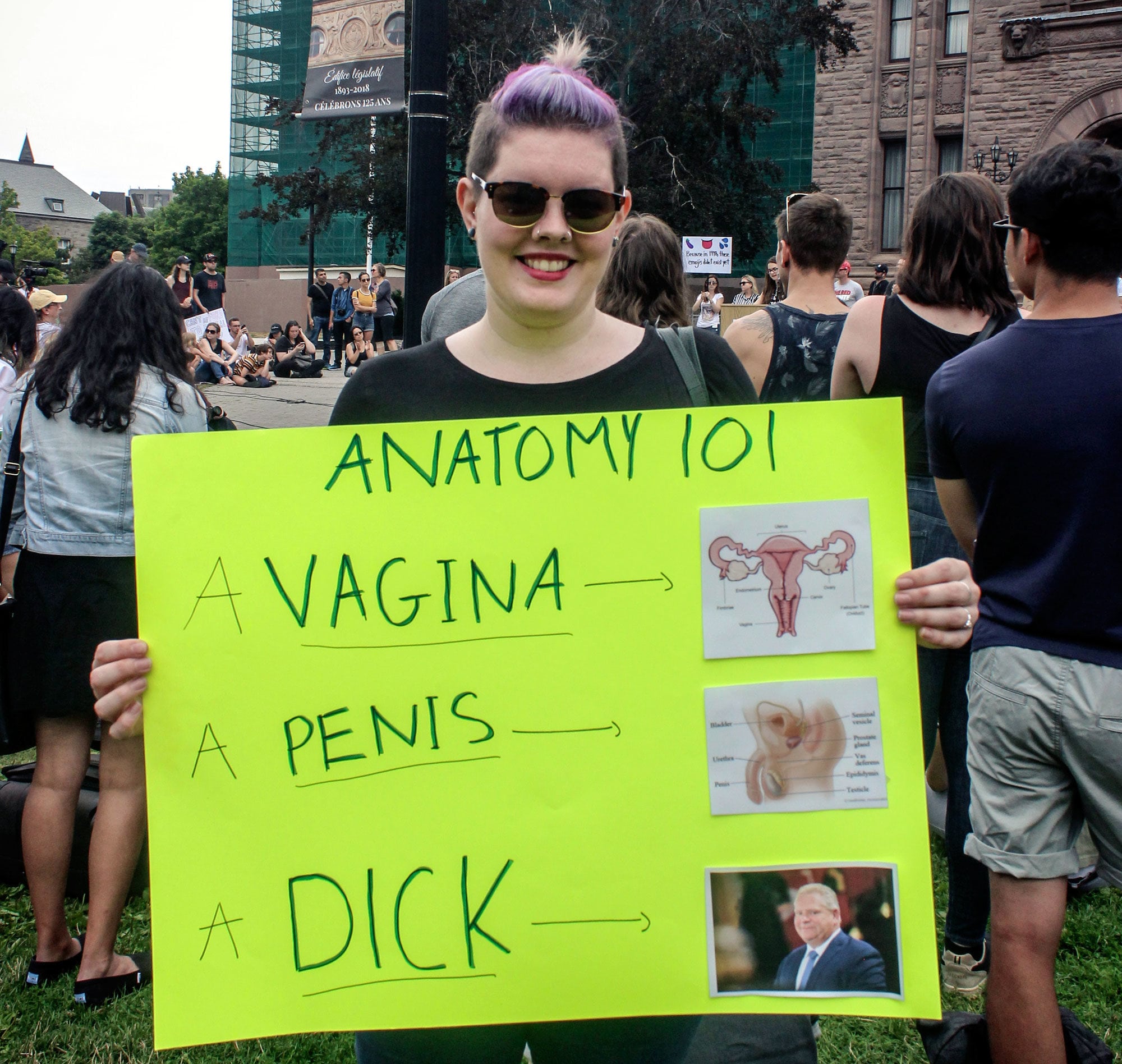 Carissa Ainslie, 30
Gallery Director
“I grew up in Nova Scotia and I was very lucky that my teachers in Halifax taught us such an open and accepting curriculum. It helped me a lot as a feminist and a queer woman.” 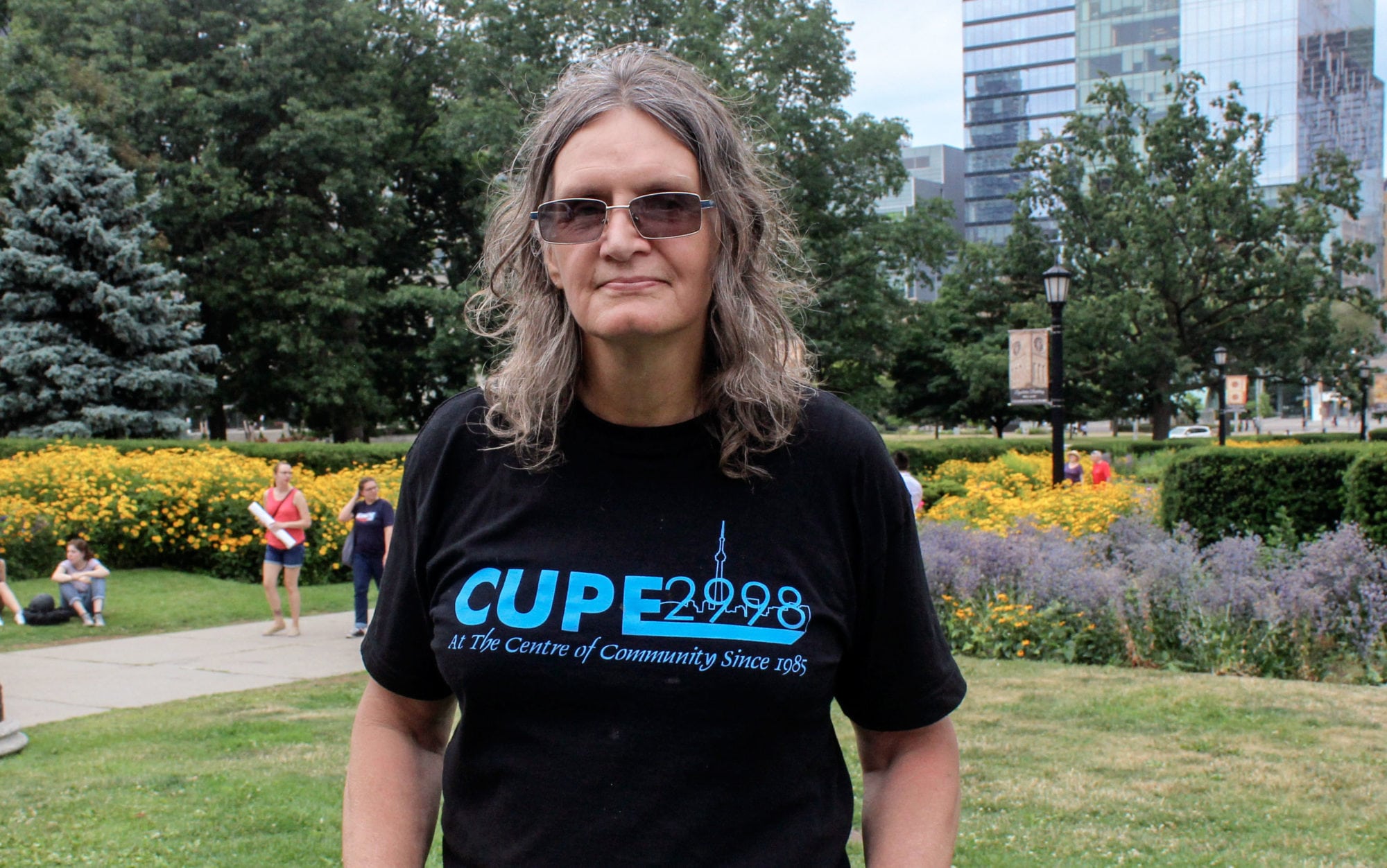 Susan Gapka
Consensus Candidate for Toronto District School Board
“These people have an opportunity for a different life than I did growing up. Back then, we had no role models, we were bullied and there was certainly no mention of homosexuality in what we were taught. There was really no one to look to for guidance and many of us had to keep our sexuality repressed and hidden away. For me, it caused a great deal of harm.” 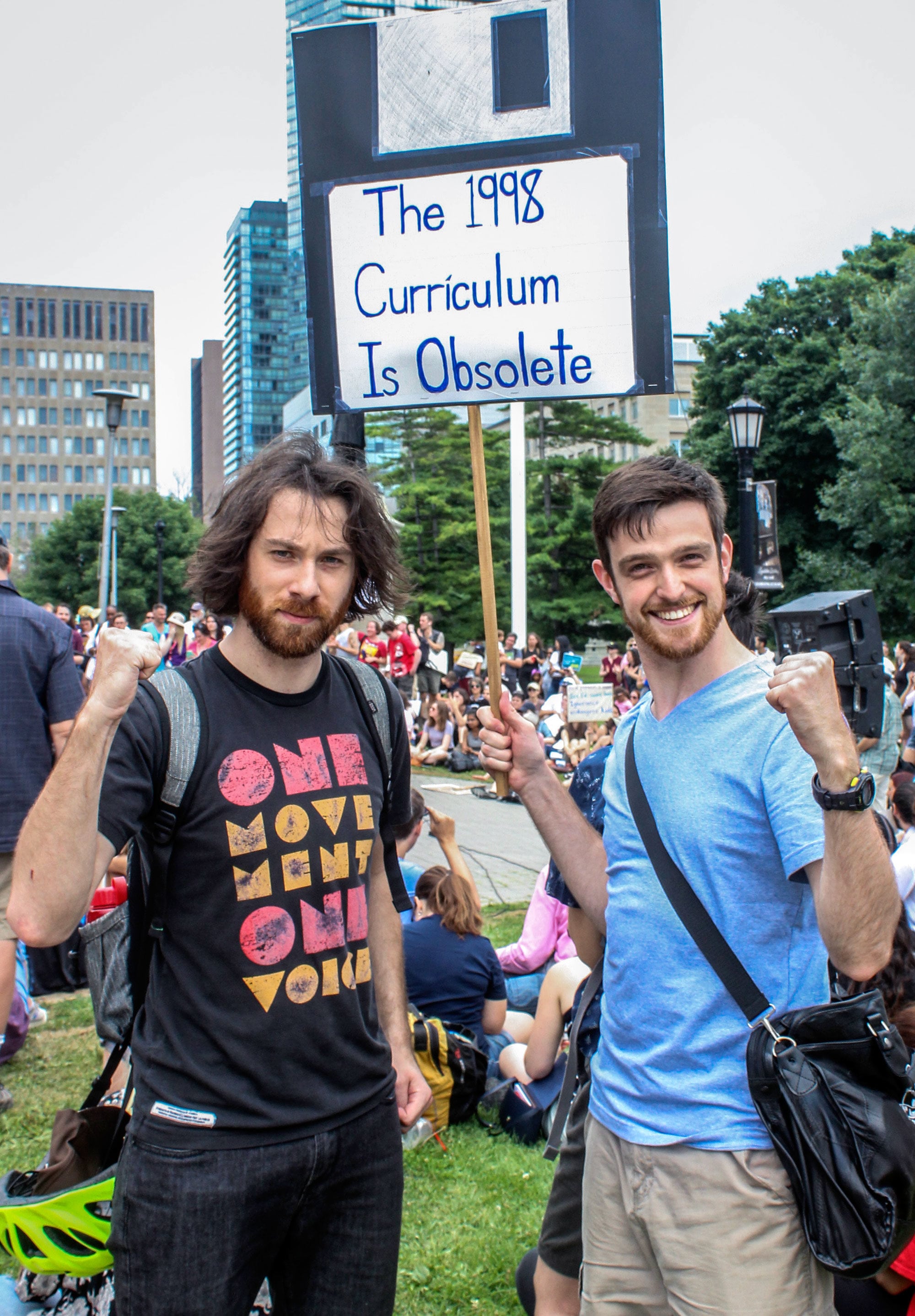 Eli Kropiunik (left), 26
Project Manager
“The old curriculum was created before the internet. When I was growing up, I was still under the assumption that there were only two genders and consent wasn’t even a word in my vocabulary. Taking moves to revert the curriculum after we’ve made so much progress is a huge step backwards for everyone.”