Toronto’s typically serene High Park has become a site of conflict between the city’s cyclists and police. There’s been an uptick in speeding tickets issued to bikers, who claim that they have been unfairly targeted by cops. And, this month, a couple of incidents have residents on edge: an off-duty cop allegedly assaulted a cyclist, and another officer allegedly hit a cyclist with his car at an intersection. Bikers are hosting a demonstration today to protest police harassment. We hit the hilly paths and winding trails of High Park to find out what local cyclists and pedestrians are thinking. 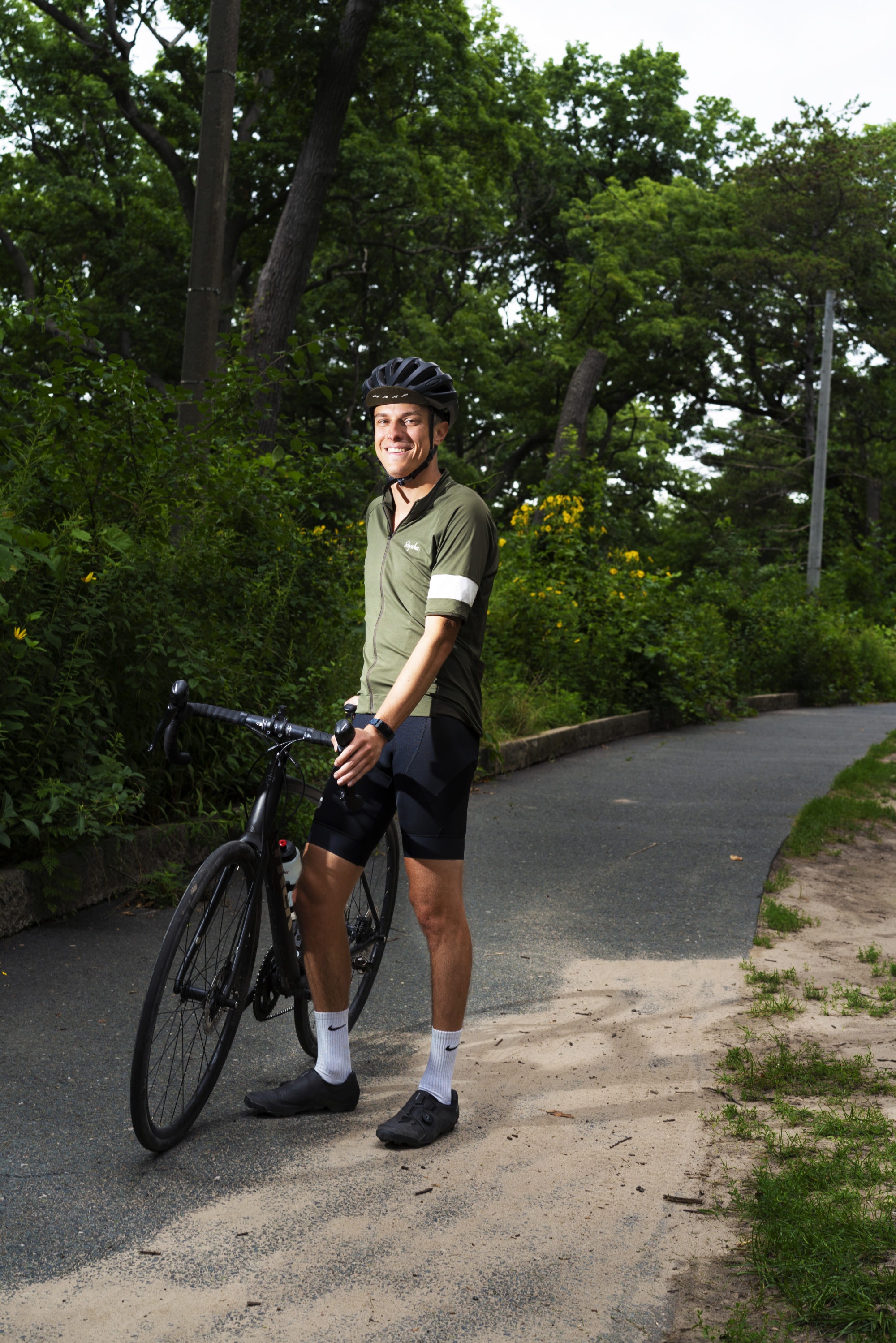 Where are you heading?
I’m heading back home after a lunchtime ride around the park. I probably ride here once a week.

Last year, the city reduced the speed limit on Parkside Drive, the street on the east side of the park, to 40 kilometres per hour and installed “Watch Your Speed” traffic signs. Do you ever ride there?
Sometimes, if I’m going for a ride along Lake Shore Boulevard, I’ll take Parkside Drive down there. It’s not the safest street. Some people will abide by the speed limits; others won’t. There’s no space to bike along there. I guess it’s like a lot of city biking, keeping your head on a swivel and doing your best not to get bonked.

Cyclists have complained recently about being ticketed for speeding in High Park. Have you ever been ticketed?
No, but I’ve heard about it. It seems unfair that cyclists have to worry about their speed in one of the only places where they can bike without a lot of vehicles on the road. Especially in such an unfriendly city toward bikers. The limit in the park is 20 kilometres. I can go 25 or 30 kilometres downhill. It doesn’t seem right to get a speeding ticket for that.

The city is considering banning cars from the park as part of something called the High Park Movement Strategy. What do you think?
I mean, why not? Does driving through the area really save people that much time? Again, for such a biking-unfriendly city, why not have at least one space without cars, where bikers and pedestrians can feel safe?

Belanna Gans, 23, master’s student in social work at Rutgers, and Natalie Lippey, 52, analytics manager at a tech company; both live the Annex with their Shih Tzus, Darth Daisy and Master Jane 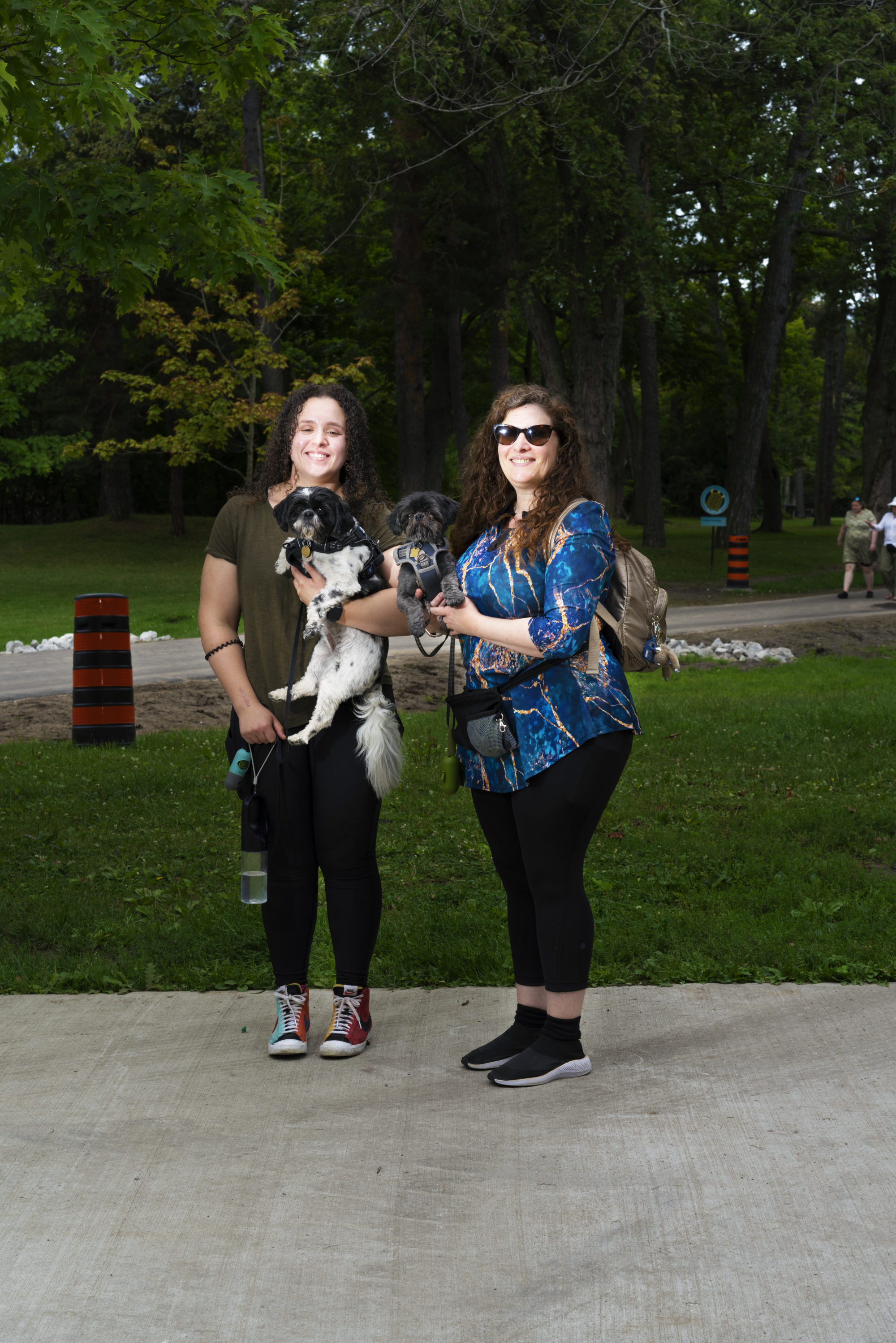 How often do you come to the park?
Natalie: A couple of times a year. My work team just had a picnic here.

How comfortable do you feel walking around with all of the fast-moving cars and cyclists?
Natalie: I’m pretty comfortable. None of that is going to bother me. It’s a pretty big park. There’s lots of room for everyone.

Belanna: Cyclists shouldn’t be on the sidewalk.

Natalie: I have a much bigger objection to cars than I do to bikes.

The city is considering banning cars from the park. Do you think they should?
Natalie: Absolutely. It wouldn’t bother me to park on the street and walk in.

Belanna: Only if there were parking lots on the outside so cars didn’t have to drive in.

Natalie: Yeah, that’s a really good idea. Because I’ve been here on the weekend, when cars aren’t allowed in the park, and I couldn’t find parking on the outside. That’s been a problem. But, I mean, you can always ride the TTC, which is awful, but it does exist.

What can motorists do while driving to make the roads safer in this area?
Natalie: Go slower.

Belanna: Cars should yield to cyclists pretty much always. Like, if you’re on a bike and want to turn left at an intersection, you should be able to park your ass right in front of a car and not have to worry about them hitting you. 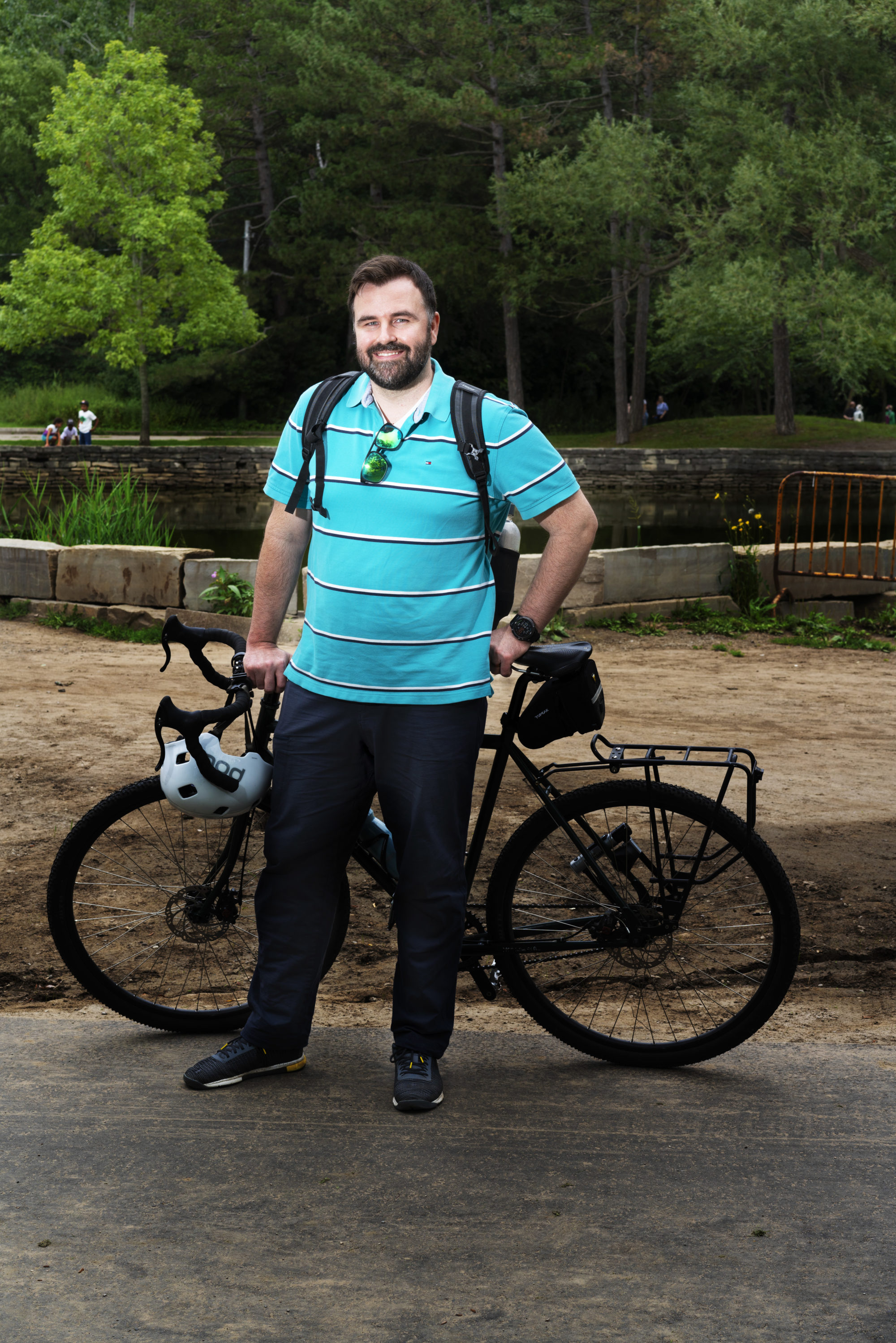 Where are you heading?
I’m going up to Bloor. When I used to live just up the street, I would bike in the park every second day. The cars are relatively slow. I have more issues when I bike elsewhere in Toronto, where cycling lanes move in each direction on both sides of the road. It creates a lot of blind spots when cars are turning. It’s definitely a lot safer to have the cyclists going in the same direction as the cars.

Have you heard about the recent tensions between cyclists and police?
Yeah, someone mentioned it to me recently. They said a lot of cyclists were getting speeding tickets. I didn’t know that. It’s definitely an interesting conversation because cyclists are not cars, but they’re expected to behave like cars. I understand some of the concerns around that, because pedestrians getting hit by cyclists is a problem.

Do you feel comfortable biking in High Park?
Yeah, when there’s space for cyclists, for sure. Elsewhere in Toronto, there’s usually not. It can be anxiety-inducing to bike past hundreds of parked cars without having enough time to tell whether you’re going to get doored. I think there are a lot of roads that are really old and don’t have the space to adequately allow for cyclists in general, but we’re also not allowed to cycle on the sidewalks. So where do you go?

The city is considering banning cars from High Park. Thoughts?
Reducing cars sounds like a great idea in general, as long as they provide other ways for people to get into the park, like improved public transit. Remember, there are people with disabilities who also need to access these public spaces. You need to provide for them.

What could city council do to make streets safer for cyclists?
It would be cool if Toronto maybe took a lot of the smaller streets and turned them into one-ways with cycling routes on them. It seems like some streets in this neighbourhood have achieved that. I know that Roncesvalles has a lot of one-ways, which are safer for cyclists, in my opinion. 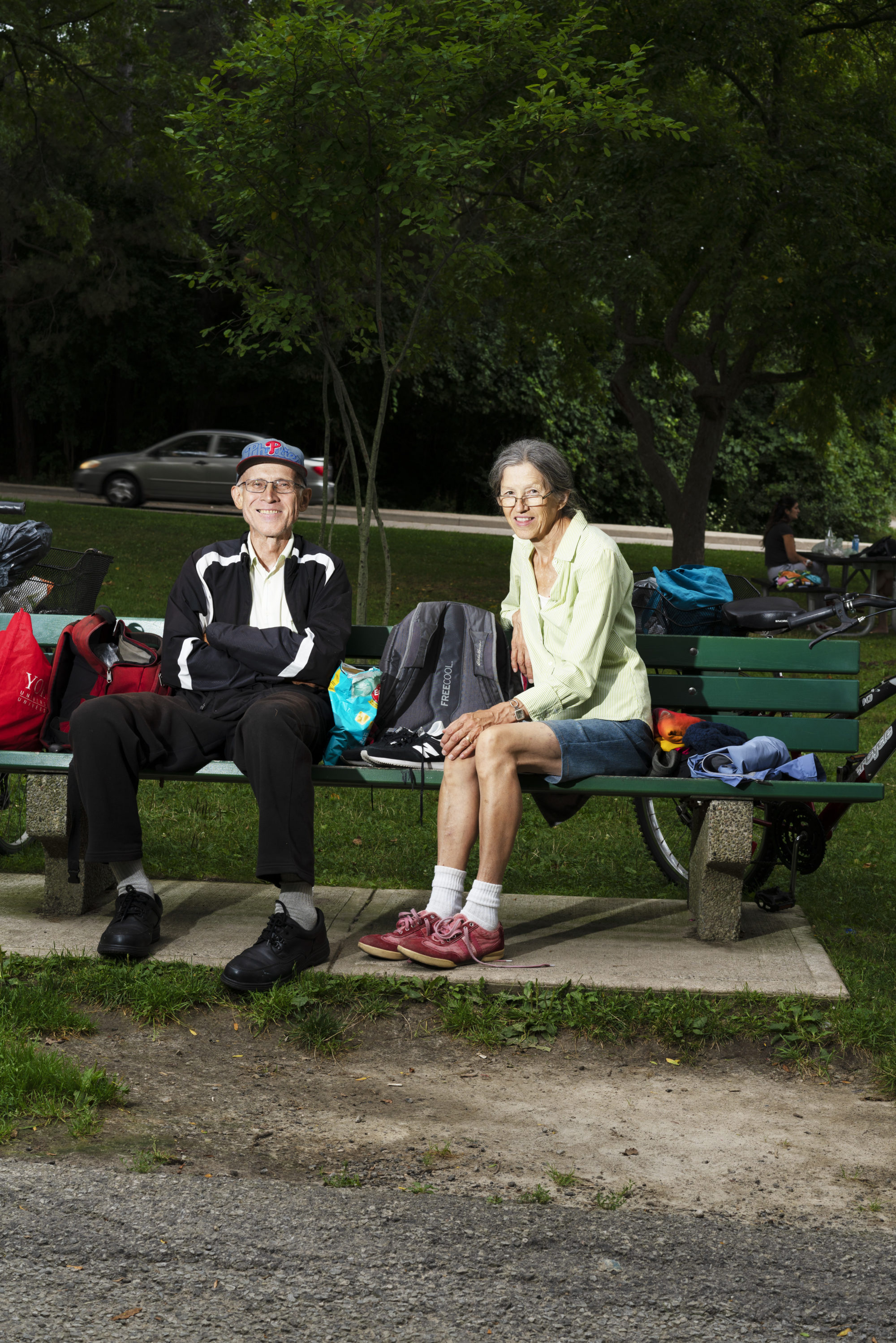 How often do you bike in this area?
Eugene: Every day. We’re usually going through the park to visit our daughter, who lives near Roncesvalles. We take care of our grandson. Or we meet them somewhere here and spend time together.

Do you ever bike on Parkside Drive?
Eugene: No, Parkside is crazy. I bike on the sidewalk if I have to.

Did you know they reduced the speed limit?
Vicki: It’s much better if the traffic doesn’t go so fast. But, even when we’re crossing the street inside the park, to get to the playground, the cars are going too fast.

Eugene: People don’t obey the speed limits anyway. We live on a street that’s supposed to be a 30-kilometre zone. Do you think people honour that? We have this thing in Canada where going 10 over the speed limit is accepted. Even for police cars. I see them violate the rules all the time. I come from Europe. Over there, a yellow light means stop if possible. It’s not a signal to rush through the intersection at the last second. People here need a lot of education on how to drive.

What’s something the city could do to make cycling safer?
Vicki: We should have more police patrol at night, because my bike was stolen. I just parked it for one night at Bloor and Keele. I had it for three years and I always parked it in my garage. One night, I forgot to put it in the garage…

Have you heard about the recent tension between police and cyclists in this neighbourhood?
Eugene: Yes, I heard about it. It’s an unnecessary thing, looking for problems that are not problems. While the cars are going over the speed limit unpunished, police are still ticketing cyclists. There should be a discussion about what police consider a violation for both cars and bikes. 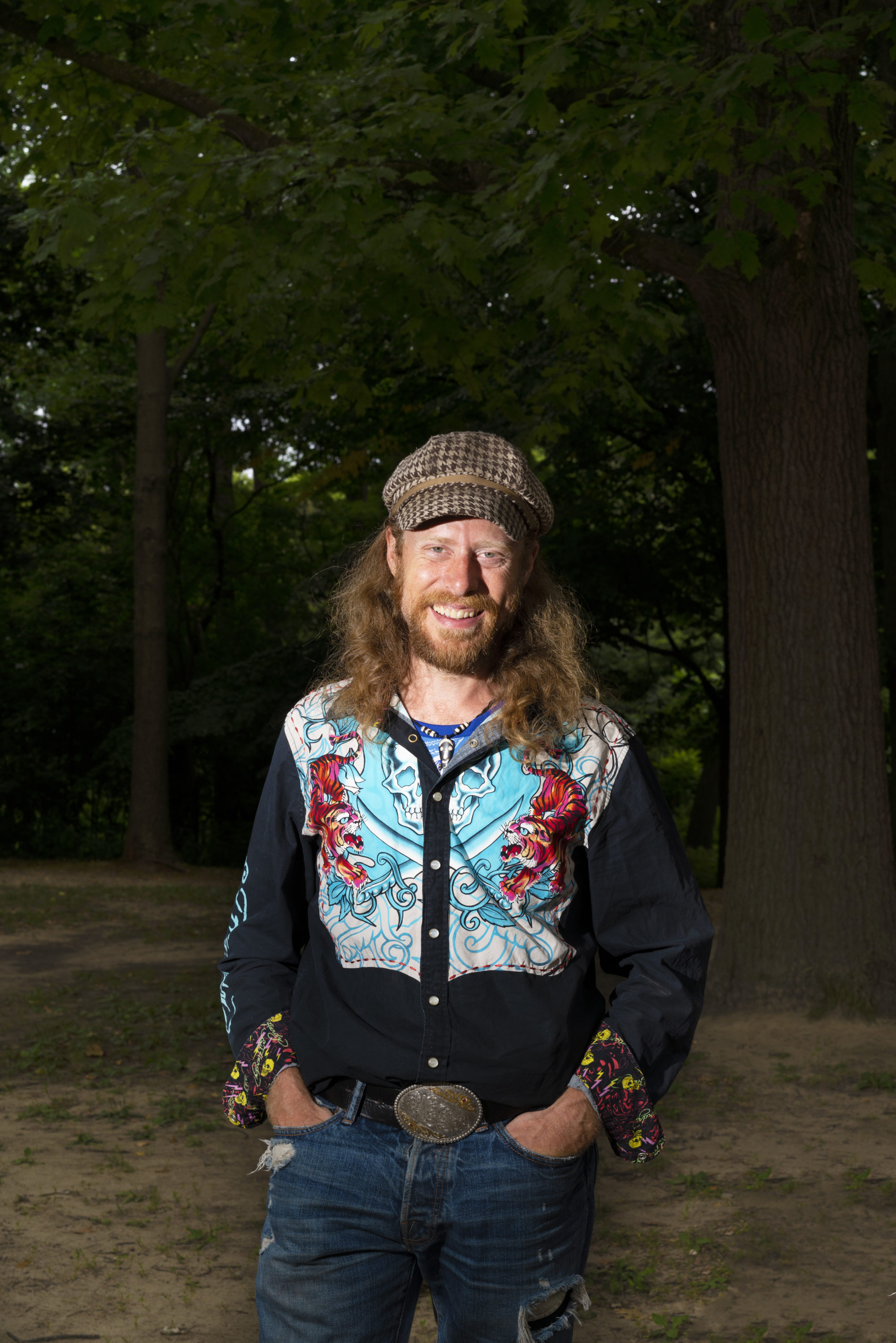 How often do you come to High Park?
Weekly. We usually come in from the east side of the park because we walk from our place. We try to mix it up and go through the zoo sometimes too. We usually bring our one-year-old daughter. We’re having her first birthday party right now.

The city is considering banning cars from the park. Thoughts?
I think it’s sad. I look at it a couple of ways. I’ve heard there’s going to be two million new people in southwestern Ontario in the next two years. If everyone has a car, we’re going to be stuck in traffic all day. At the same time, I wouldn’t be able to have my child’s birthday here without being able to drive my van into the park with all of the supplies. The park is set up for vehicles. Just keep the vehicles.

What could the city do to make it safer here for pedestrians?
I don’t know how you convince people to be safer. I don’t think Toronto can do anything. People’s parents have to start at a young age and give everybody the sense of respecting other people. Just keep teaching people to respect the rules of the road, be aware at all times and look both ways. I mean, I should talk. When I turned 16, I had a Toyota Celica GT-S. It was fast as fuck. But I didn’t speed, at least not until I was 20.

Varun Perumal, 33, the Annex, PhD student in computer science at U of T 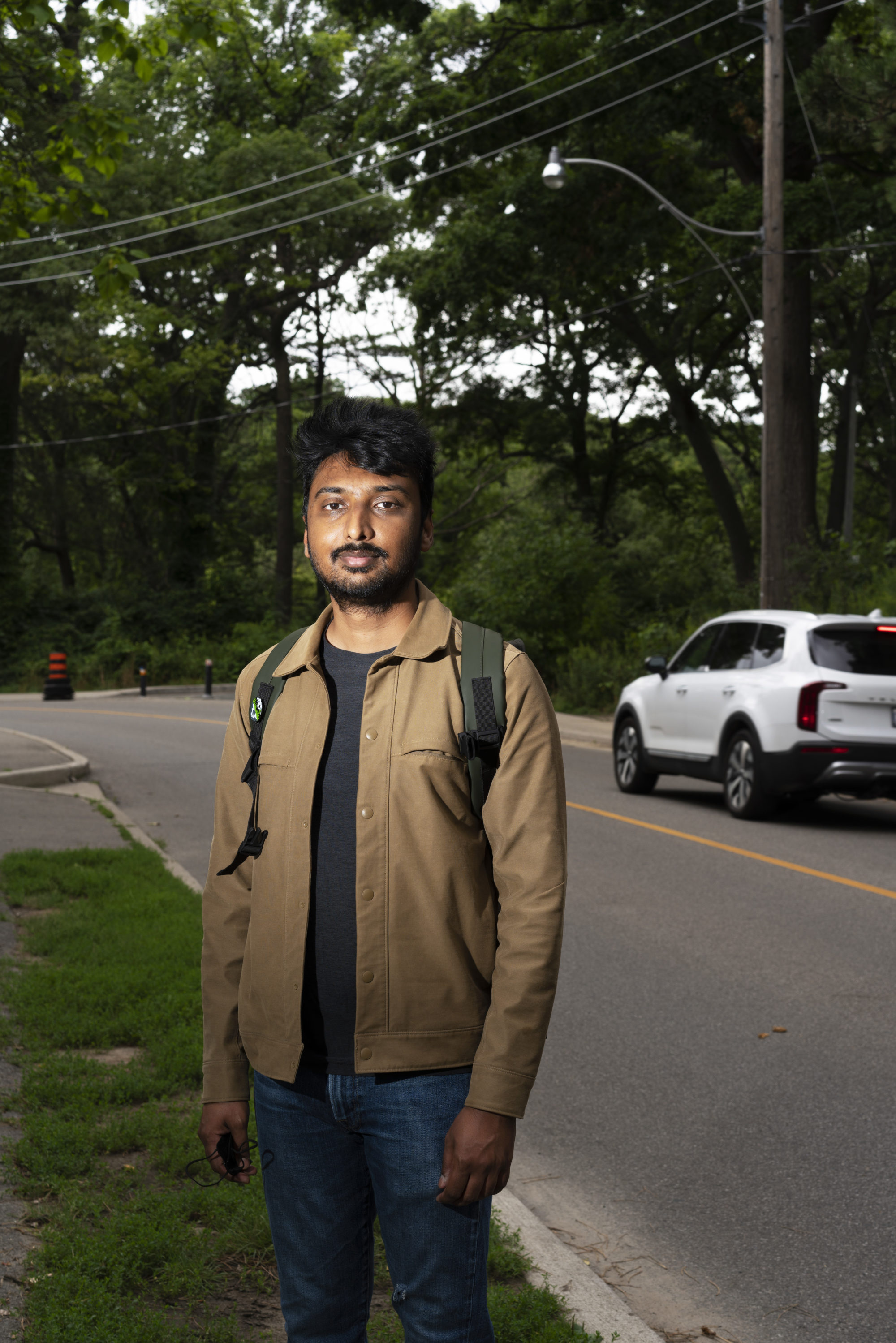 How often do you visit High Park?
I would say about once or twice a month, usually just for running.

How comfortable do you feel in the park with all of the traffic and cyclists?
It depends on the time of day or the day of the week. Sometimes there’s a lot of through traffic. It’s okay. I would say, late afternoons are probably the best time to go running in High Park. I’ve also biked through here a few times this summer.

Have you heard about the recent conflict between police and cyclists in this neighbourhood?
I’ve read some stories on Reddit, but it’s hard to verify what’s on the internet. In general, there’s always a tension between motorists and cyclists. But now it’s interesting that police are involved.

Did you know they reduced the speed limit from 50 to 40 kilometres on Parkside Drive?
I did not know about that. It’s probably not enough. Forty is still pretty fast if you’re going in a van or SUV. I feel like adding speed bumps or something would be better, because it would physically enforce the new speed limit.

What can the city do to make biking and walking safer?
In High Park, we need a clear demarcation of the paths. And better lighting, sometimes. When it gets darker, later in the fall, lighting is always an issue. To be fair to motorists, visibility is really bad sometimes, especially around corners.

They’re considering banning cars from High Park. Any thoughts?
You have to think about accessibility. There are a lot of people who can’t bike or walk and rely on cars to get to the park. It’s not a flat park, so if you’re in a wheelchair, it’s difficult to navigate those things. I feel like banning cars would be completely unfair to such people. So I don’t know if that is the best option. You could instead have transit terminals and things like that for those who need assistance to get around.