Over the weekend, gas prices in Ontario hit a whopping 200.2 cents per litre, up from 126.2 cents per litre at this time last year. It’s a sorry sight for all motorists, who are likely wondering whether it might finally be time to buy an electric vehicle. We went to a gas station near High Park to see how Torontonians are responding to the maddening increase in prices at the pump. 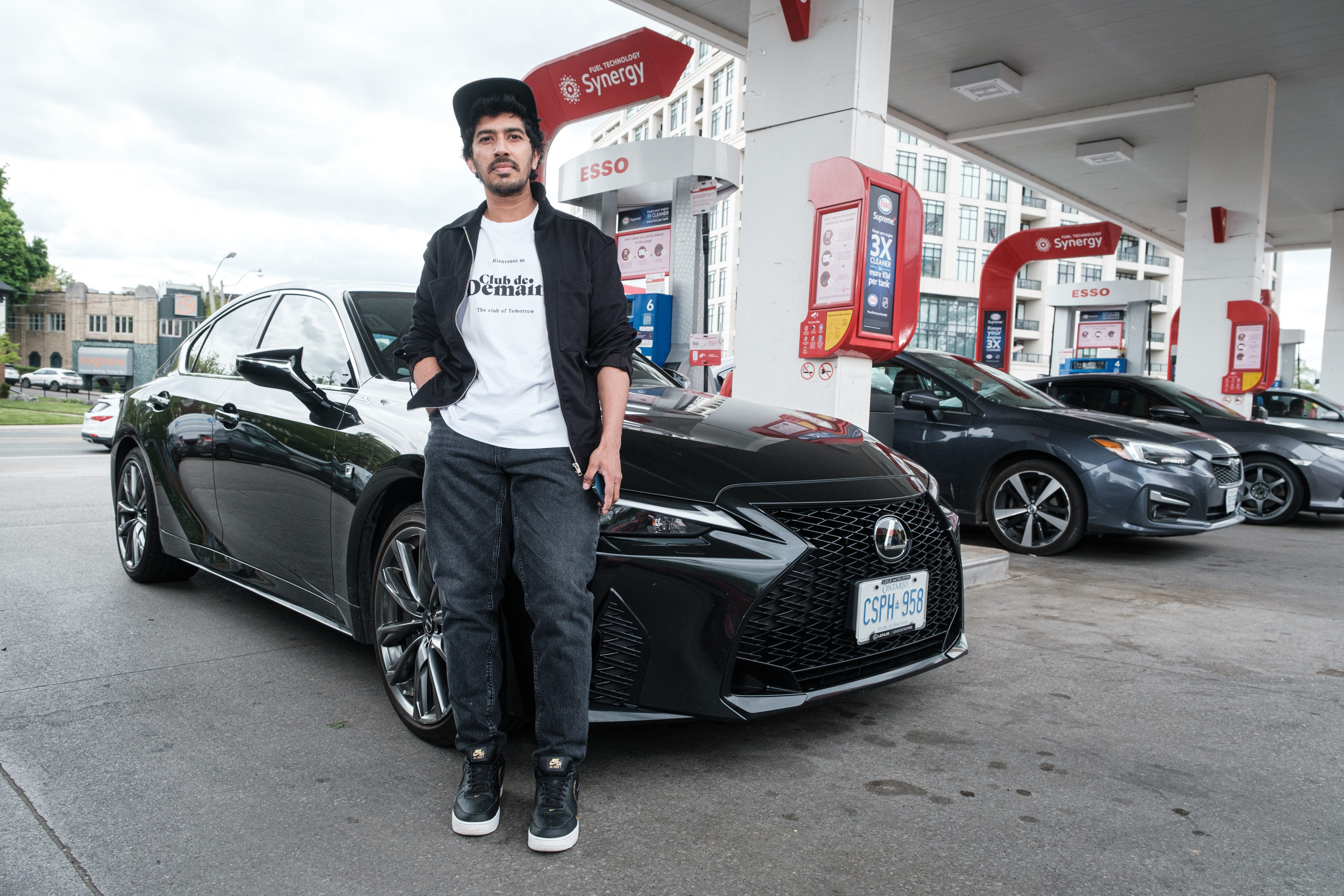 Where do you usually drive?
I drive mostly for work. But nowadays, I prefer to take public transport because of gas prices, unless it’s somewhere close. Yesterday, I drove to Wasaga Beach, and used almost $130 worth of gas. I often drive on weekends for trips, and it adds up.

Have you changed your driving habits?
Yeah, I’m alternating cars now. I have another car, an old Hyundai. I like to take it when I drive somewhere nearby, because it runs on regular gas and it’s cheaper. I also use it when I’m doing deliveries for Uber Eats. I don’t think I would make much money by doing Uber Eats with the Lexus.

Do you think gas prices will keep rising in the near future?
I think prices are going to keep going up. I’m originally from Sri Lanka, where prices have been rising. Back home and here, gas prices are similar, so I think that’s the trend.

Are you considering a shift to electric vehicles?
Yeah, I’d prefer to buy electric next time. I’m not into gas anymore. I’m literally exhausted. 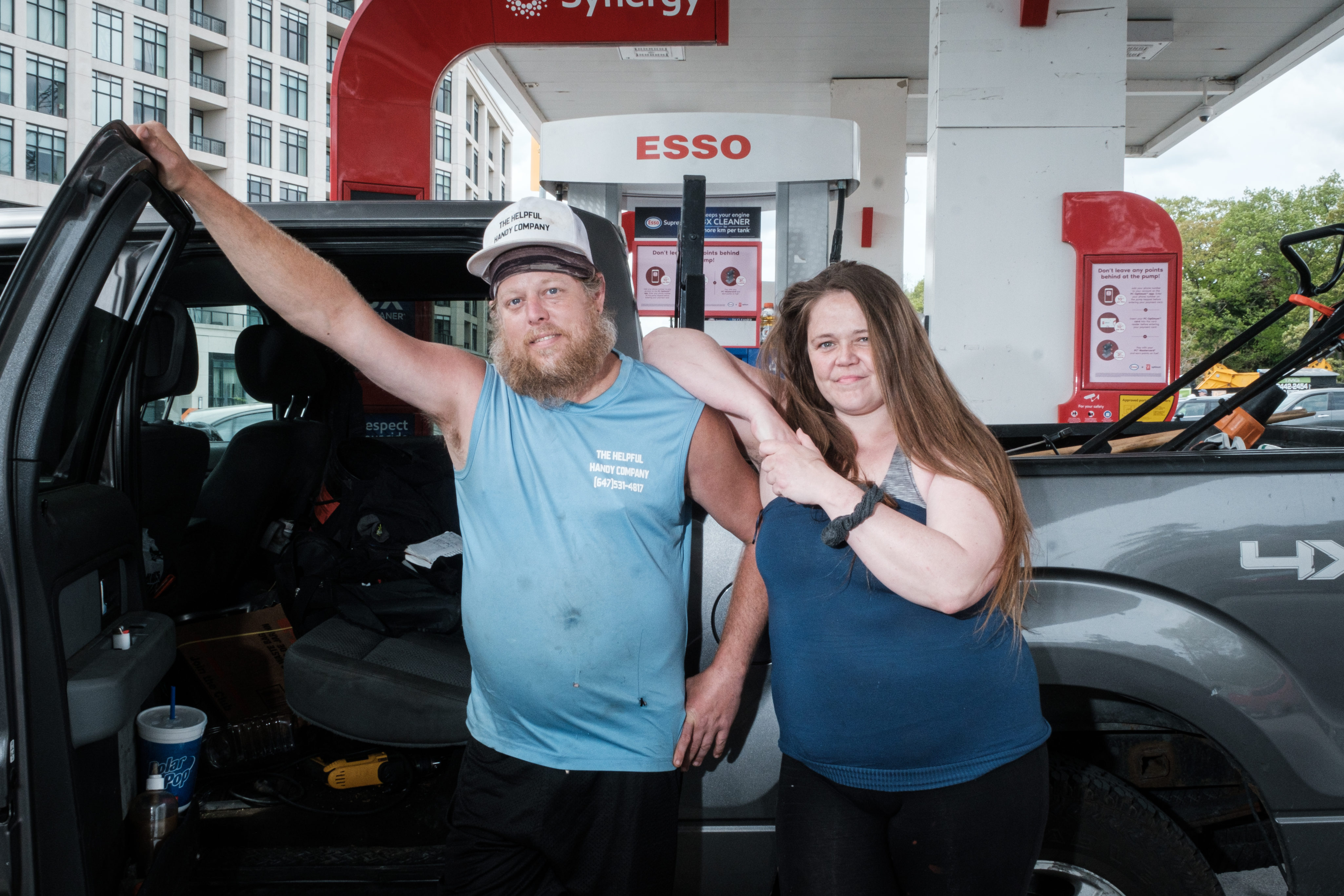 What do you drive?
Cassandra: For our business, it’s a Ford F-150 EcoBoost. It goes about 700 kilometres on a single tank.

How much do you spend on gas?
Cassandra: We spend about $2,000 a month. This F-150 costs $300 a week on gas. We have a smaller, four-cylinder truck that eats about $100 of gas every week. And then the lawn equipment also runs on gas. I’ve been doing this work for two years on and off, operating the mowers, and I’ve never seen gas prices nearly this high.

Are you changing your driving habits?
Cassandra: We mow residential lawns all over Toronto and Mississauga, so we have no choice but to keep up with business as usual and pay the extra cost. We filled it up Friday, and it’s already at half a tank, and we only use it for work.

I think people are going to take the bus a lot. When I’m not working, I don’t drive, and it saves money. I carpool with family members, sometimes I take the TTC, and I take Uber a lot.

Will prices keep rising?
Cassandra: Probably, because of the war in Ukraine. It’s unfortunate. You pay a toll for the 407, and also car insurance on top of the gas. More and more, only the rich can afford to drive.

Are you considering a shift to electric?
Cassandra: Slowly but surely, but there are still glitches with electric vehicles. I wouldn’t be comfortable driving one now, but I think that’s where society is going. 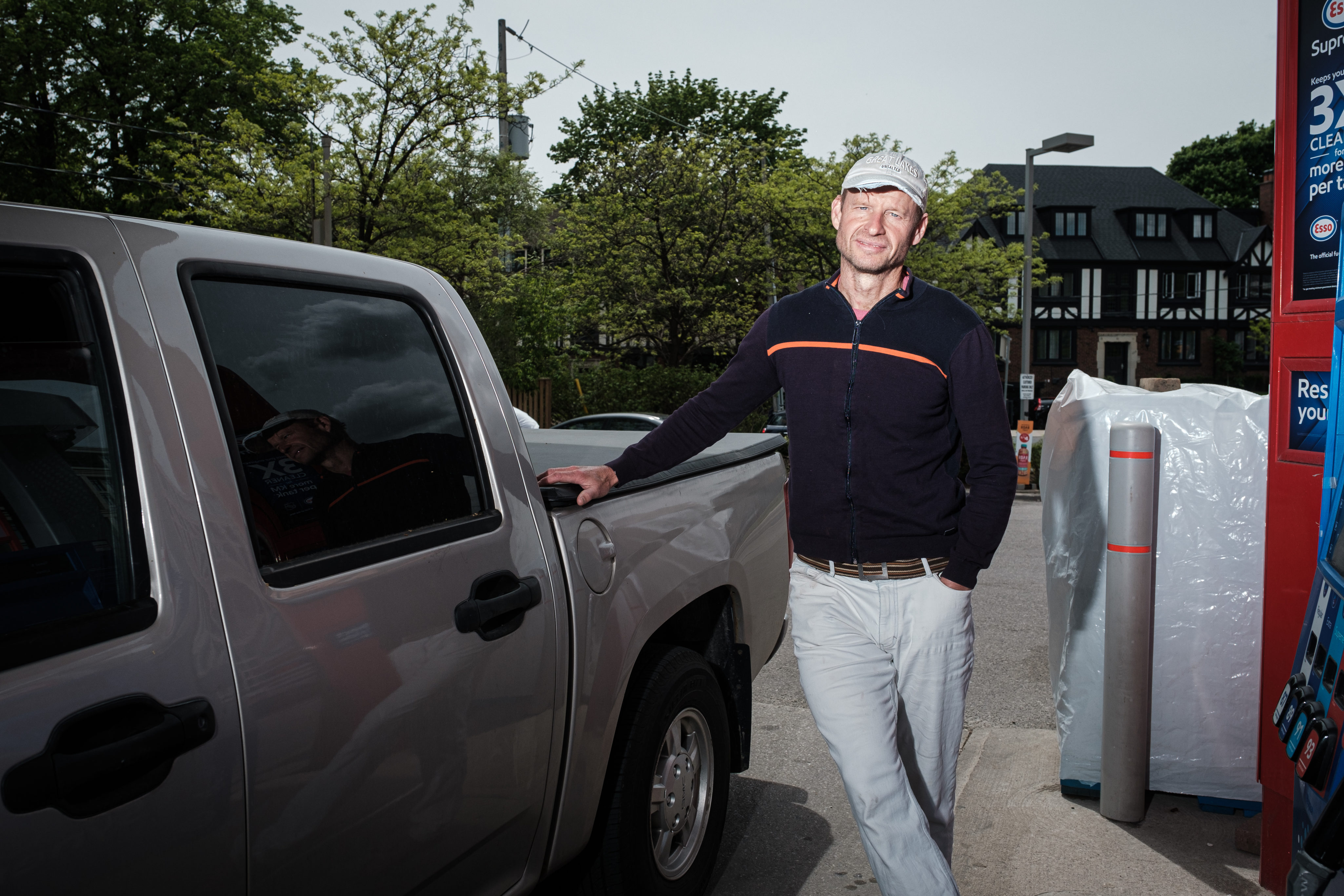 What do you drive?
A GMC Canyon, and it’s not too bad on gas. I got this truck because it was more efficient than a Ford-150. I’m not a car guy. I don’t need something souped-up.

Have you seen gas prices this high?
Never. I do remember when it was under a dollar, now it’s over two dollars. It’s crazy. I was never really concerned about gas prices—I always thought it was a little petty to worry about a dollar here or a dollar there. But now it costs so much that it’s a big deal.

Where do you usually drive?
I mostly drive around town to run errands. I have five kids, and I do a fair amount of driving with them for their school and activities. We also live in an old house, so I’m constantly thinking about picking things up for my landscaping projects. But I’m driving to Sarnia today, so that’s going to hurt a little bit.

Are you changing your driving habits?
I’m kind of an outdoors guy, and I’m often on my bike anyway, so it’s sort of pushing me even farther in that direction. In a way, it’s good. But for the first time ever, gas prices are affecting my decisions about how I get around. They’re on my radar.

Are you considering a shift to electric?
There’s always that option, but I’m more inclined towards the no-vehicle option. My family was down to one vehicle for a while, and that worked, but I started doing odd jobs at our house and other properties, and it was nice to have a car to get around. 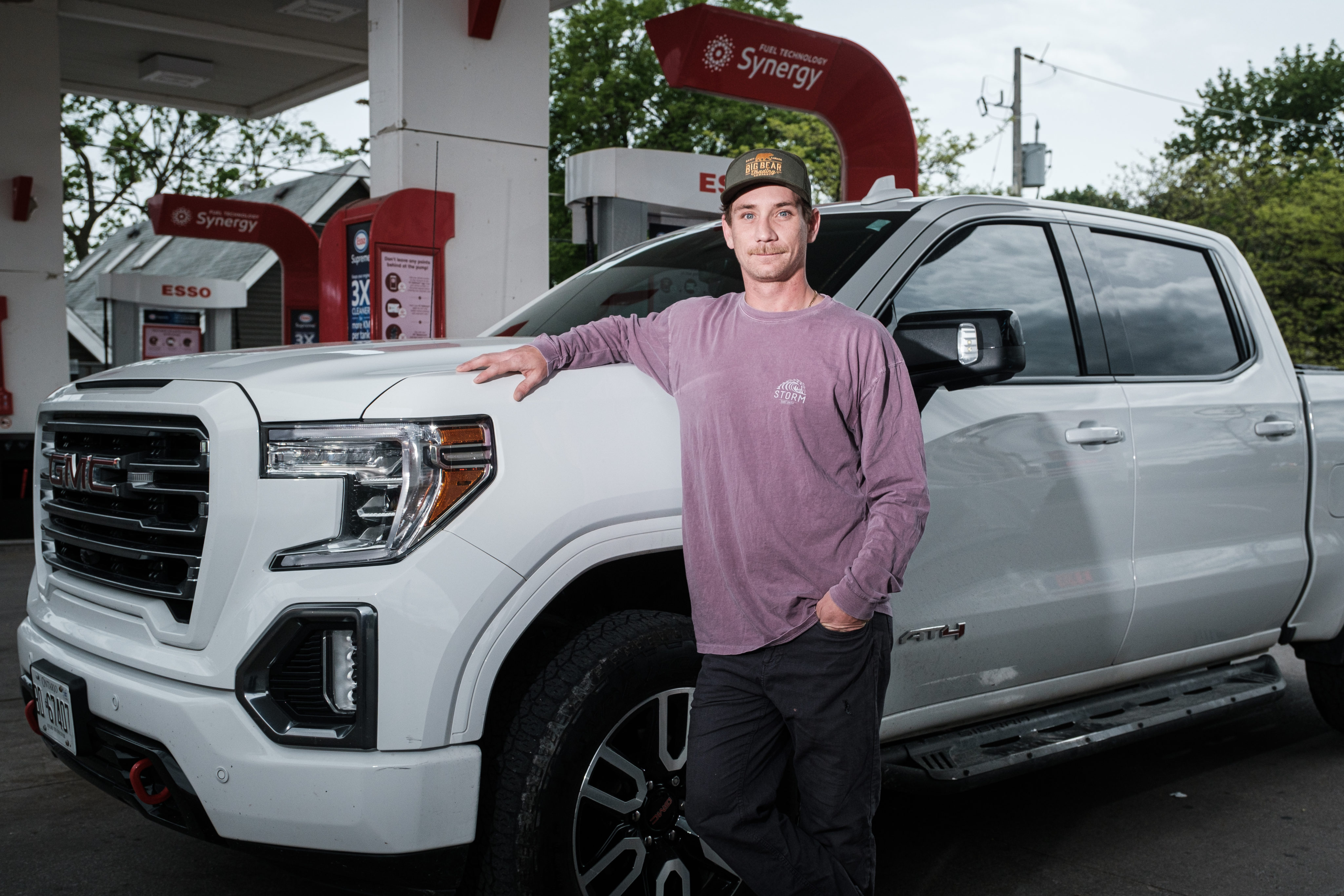 What do you drive?
GMC Sierra. I’ve had it for two years.

How much do you spend on gas?
I go through about a tank per week, which amounts to roughly $225.

Where do you usually drive?
I drive from job site to job site, almost exclusively inside the city, but I have a few projects in Milton, so I make the trip over there a few times per week.

Are you changing your driving habits?
I’m definitely more conscious of it, especially in the last little bit. I use Uber and the subway system, but that limits where you can actually go. For work, I don’t really have a choice but to use my truck.

Are these gas prices making you change the way you operate your business?
When it comes to large projects, it does affect it. You start thinking about costs of moving dirt in large machines, things like stockpiling more soil at certain places to avoid trips.

Will prices keep rising?
I think they’re probably at their worst, but I don’t think gas prices will come down tremendously. They’ll probably just trend in an upward direction. I think that’s the case for virtually every consumer product we’ll have in the next few years.

Are you considering a shift to electric?
Lately, yeah. When I bought this vehicle, I went a step up to premium grade, and now it has me thinking, Oh god, why did I commit to this? But I’m in it now. I’d love to eventually get the electric versions of the Ford or this truck, but that’s a big, expensive commitment. 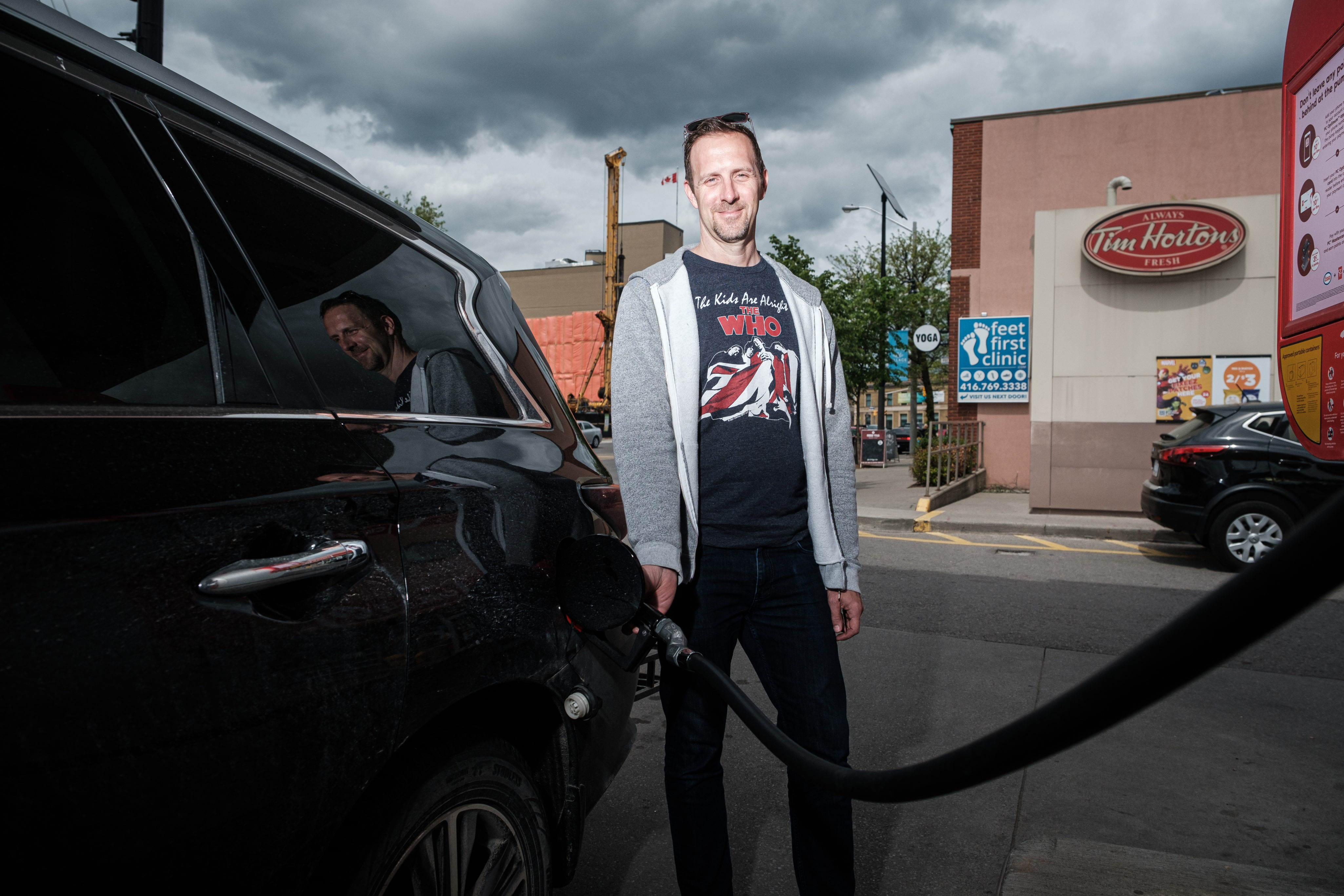 What do you drive?
An SUV.

How do you feel about gas prices?
They’re terrible. I don’t recall seeing them this high.

How much do you spend on gas?
My family goes through one tank per week, and the costs to fill a full tank is $140. Sometimes I fill with higher octane, but even if I fill with regular, it’s way more than $100.

Are you changing your driving habits?
I work from home, so I can’t really complain. I only use the car to drive the kids to hockey or to go to the cottage. It doesn’t make me change my habits that much, but now I don’t go on drives for nothing. It plays on my mind more.

Do you think they’ll keep rising?
Well, as long as the war on Ukraine goes on and Russia stays angry, I can’t see it getting much better.