“Not finishing wasn’t an option”: After losing my son, I found strength competing in my first Ironman Triathlon

“Not finishing wasn’t an option”: After losing my son, I found strength competing in my first Ironman Triathlon

“I had a deep fear of open-water swimming, and my first training swim went horribly wrong when panic set in”

In April 2009, Lynn Keane’s 23-year-old son, Daniel, died by suicide. To cope with the grief, Keane found peace in running. After competing in numerous marathons, she decided to confront her fear of open-water swimming and sign up for her first Ironman Triathlon in 2018. Here, she describes how the loss of her son pushed her to reach new mental and physical heights.

Over the past 22 years, I’ve run 15 marathons, including the Boston Marathon six times, and competed in countless half marathons and shorter-distance events. For me, running wasn’t just about the exhilaration and exercise. It helped me build resilience and inner strength in the face of heartbreak. In 2009, my husband, Bruce, and I lost our son, Daniel, to suicide. Running helped me find my way through the grief.

Before he died, I had spoken to Daniel about my desire to compete in a triathlon. He’d said, “But you’re not a swimmer, Mom!” Daniel loved to tease me and make me laugh. He was a great cook despite his severe food allergies. He brought warmth and exuberance to our lives with his big, beautiful smile. And he was right—I loved the water, but I started to panic whenever I ventured too far out into the vastness of a lake or ocean. In the aftermath of losing Daniel, once I felt emotionally stronger, I decided to challenge that fear. It gave me something to work toward, and pushing my body made me feel alive. Crossing the finish line of my first half Ironman in 2015, I thought of Daniel and how proud he would have been. I went to sleep that night knowing I would complete a full Ironman one day. The competition involves swimming 3.9 kilometres, biking 180 kilometres and running 42.2 kilometres.

After two years of competing in half-Ironman races, I felt ready. In July 2018, after nine months of gruelling training, I arrived in Lake Placid, New York, to compete in the biggest race of my life. My goal was to finish under the 17-hour cut-off time. The bucolic village in the Adirondack Mountains is a mecca for outdoor sports: it hosted two Olympic Winter Games, in 1932 and 1980. Making my way to the hotel with Bruce, I noted the steep driveway we’d have to climb each time we returned to our room. I decided I wouldn’t go up and down too much. Have to save the legs, I thought.

Our two daughters and their partners also made the trip to Lake Placid to support me. In the days leading up to the race, I took it easy, enjoying meals with my family, going for a short swim in Mirror Lake, and biking and running to remind my body of the work ahead. The day before the race is all about rest and calming your mind. “Stay off your feet!” I was told repeatedly by my coach and training friends.

On race day, I woke up at 4 a.m., needing extra time to eat, digest and settle my nerves. I have ulcerative colitis, which causes inflammation and ulcers in my digestive tract. To avoid spending valuable competition time in porta-potties, I stick to a fairly simple diet on race mornings: a plain bagel, peanut butter, a banana and tea. My race gear, including my Lycra shorts and tank top, timing chip, water bottles, wetsuit and goggles lay on the hotel floor. I took photos of everything to reassure myself that I hadn’t forgotten anything.

Ironman races begin with the swim. The swim starts are notoriously anxiety-inducing. When you jump into the water, you might experience anything from shockingly cold temperatures to getting whacked in the face by a stray limb or jostled by the throng of hyped-up swimmers sharing the water. You might have open space in front of you, but there’s always the possibility that swimmers will come crashing into you from behind.

Everyone seemed to be descending on the beach at once. The noise and commotion messed with my head. With my wetsuit in hand, I moved away from the crowds, found an empty spot by a stump and glanced out at the flat water that would soon be churned up. From this vantage point, I saw the race buoys lined up along the course for the first time. I took in the entire 900 metres we would swim before turning around and heading back to the beach. It looked very far. I put my head down and shut my eyes for about 10 minutes, dozing off in the midst of the calamity.

When I woke up, surrounded by competitors, I got into my wetsuit. I wondered where my family was. With over 1,000 pink bathing caps in a sea of black wetsuits, it wouldn’t be easy for them to find me. But, from up on a hill near the beach, they spotted me. I knew they were proud of what I had accomplished to get to this day. As a family of five, we’d had many great adventures together. Now, as a family of four, we sought out meaningful opportunities to feel joy by celebrating our personal achievements and creating new traditions together. Through the temporary fencing on the beach that separated triathletes and loved ones, my youngest daughter slipped a bracelet around my wrist. “To help you conjure strength,” she said. 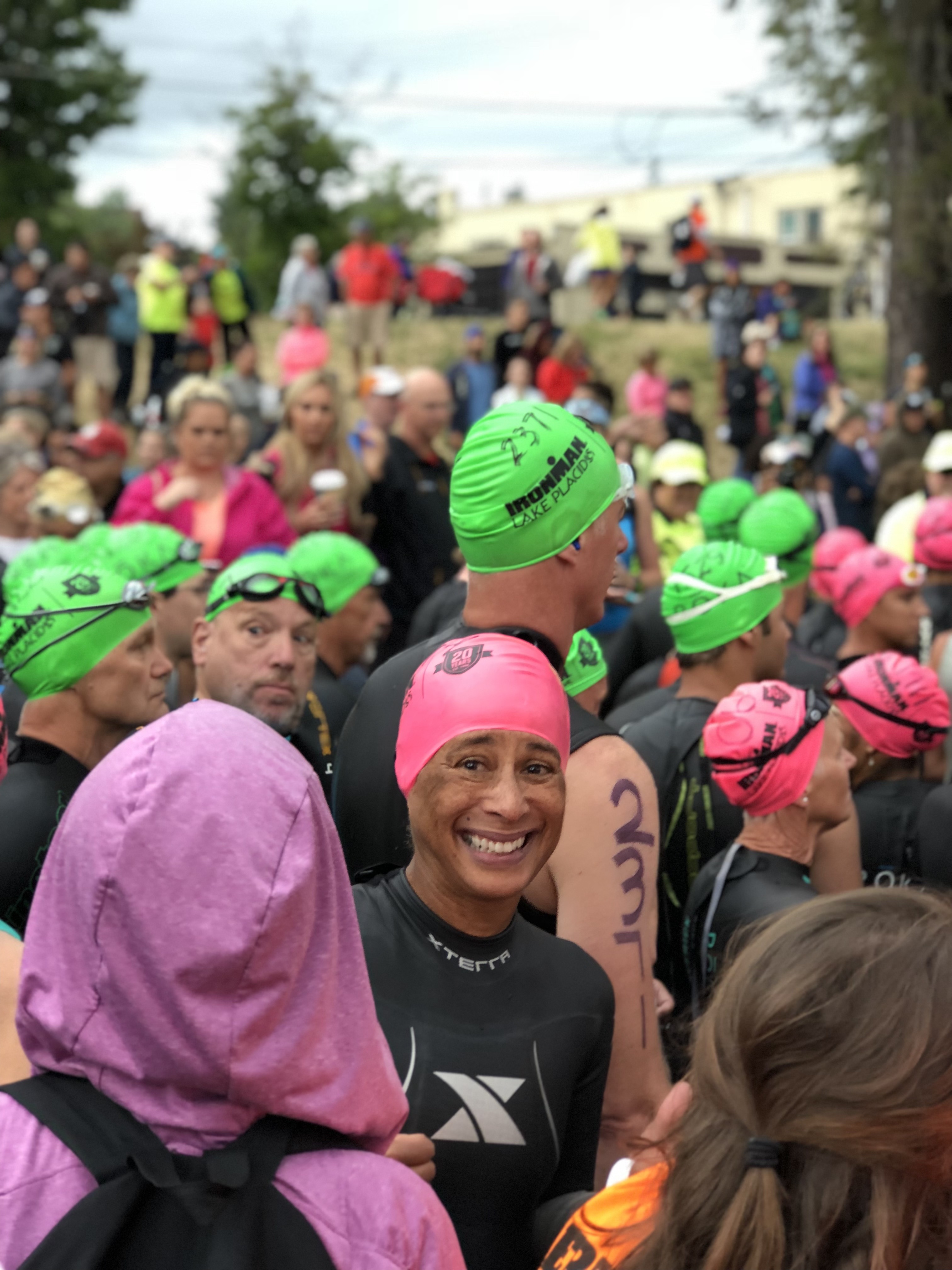 As I prepared to enter the water, my mind wandered back to my first training swim, in Hamilton several years earlier. It went horribly wrong. Once I’d swum out to the middle of the lake, I looked back, saw how far from the shore I was and froze. My limbs went limp, and I felt like I was sinking. I opened my mouth to yell, but nothing came out. My triathlon coach and another swimmer from my group noticed and came to my aid, turning me on my back to help me catch my breath and swimming back to the beach with me. After that, I stopped swimming altogether for a few years, but the desire to be a triathlete remained.

I continued to deal with anxiety in open water during training and racing, but my determination to succeed outweighed my fear. Over time, I learned that I could calm myself down with deep breathing, effectively slowing my heart rate. In 2017, I sought the help of a hypnotherapy clinic in Toronto. The clinician created an audio recording that encouraged me to “become the fish.” I listened to the recording every night for weeks, slowly finding my way in the lake at our family cottage.

My turn to enter the water was fast approaching. The trail of triathletes was long, but we moved steadily down the beach in rows. When the green light flashed, I ran into the water and started swimming. During my first strokes, I felt Daniel with me. I thought of his teasing, which was his way of encouraging me to do difficult things.

I tried to avoid the pile of excited swimmers who were also looking for unobstructed, open water. Someone’s arm hit me in the head. I got mad, and then I let it go.

After about 500 metres, I began looking for feet to swim behind. Drafting behind someone, I’d save about 30 per cent of my energy expenditure. I just tried to stay present and focus on the next stroke. Then, sooner than I thought, I was nearing the beach. Touching the sandy bottom, I began running toward the start of the second swim loop. I’d “become the fish” and was in full race mode.

I had no sense of my time, and I didn’t care because I’d just had the most enjoyable swim experience of my life. I was proud of myself. The most difficult part of the day, I thought, was now behind me.

There was no time to linger at transition. After I changed into my bike gear, a volunteer handed me my bike. I caught a glimpse of my family before heading out onto the hilly bike course. The first loop was marked by wind and rain, but I had prepared for the possibility of bad weather and felt strong and in control as I whipped down the notorious eight-kilometre Keene descent. With over 1,060 metres of elevation gain on each loop of the course, it wasn’t any single climb but the sum of many that made it such a tough course. With my family cheering wildly on the second loop, the final climbs felt a bit easier. After eight hours, 10 minutes and 55 seconds, I made it back to transition to change into my running shoes for the final leg of the race.

As the late afternoon sun beat down on the asphalt, I was pumped and ready to tackle the rolling running course. I can handle this, I thought. I’m a marathoner! That confidence lasted for exactly five kilometres, when all the food I’d consumed on the bike started causing stomach cramps so intense that I couldn’t even drink water. I began speed walking, faster than I could have run. My neck, hips and legs were sore from sitting in a saddle for such a long time, and my mind was telling me to stop. For the first time that day, I considered the possibility of not being able to finish. I decided that my pace didn’t matter, but a DNF (Did Not Finish) was not an option. I walked the hills and started running the flat sections. Night fell on the second half of the marathon, and even though my watch had run out of battery, I knew I was racing against the clock.

When I made it to the bottom of the last hill, Bruce and my eldest daughter were waiting for me. “Am I doing okay? Will I make it?” I called out. They assured me that I would finish in time. My eyes welled up in relief as we exchanged quick hugs, and I ran up the hill toward Mirror Lake for one last look at the place where my day had started. I made my way around the Olympic Oval and over to the finishing chute, which was lined with a red carpet, toward the most important finish line I’ve ever crossed. My youngest daughter and her partner were shouting my name.

Under the stars, I crossed the finish and raised my hand skyward. I thanked Daniel for encouraging me and my husband and daughters for helping me turn my impossible dream into a reality. I heard legendary Ironman announcer Mike Reilly call out my name and say the words that synthesized an almost year-long quest to push myself beyond anything I had ever imagined: “Lynn Keane from Oakville, Ontario, you are an Ironman!” My time was 15 hours and 46 minutes. 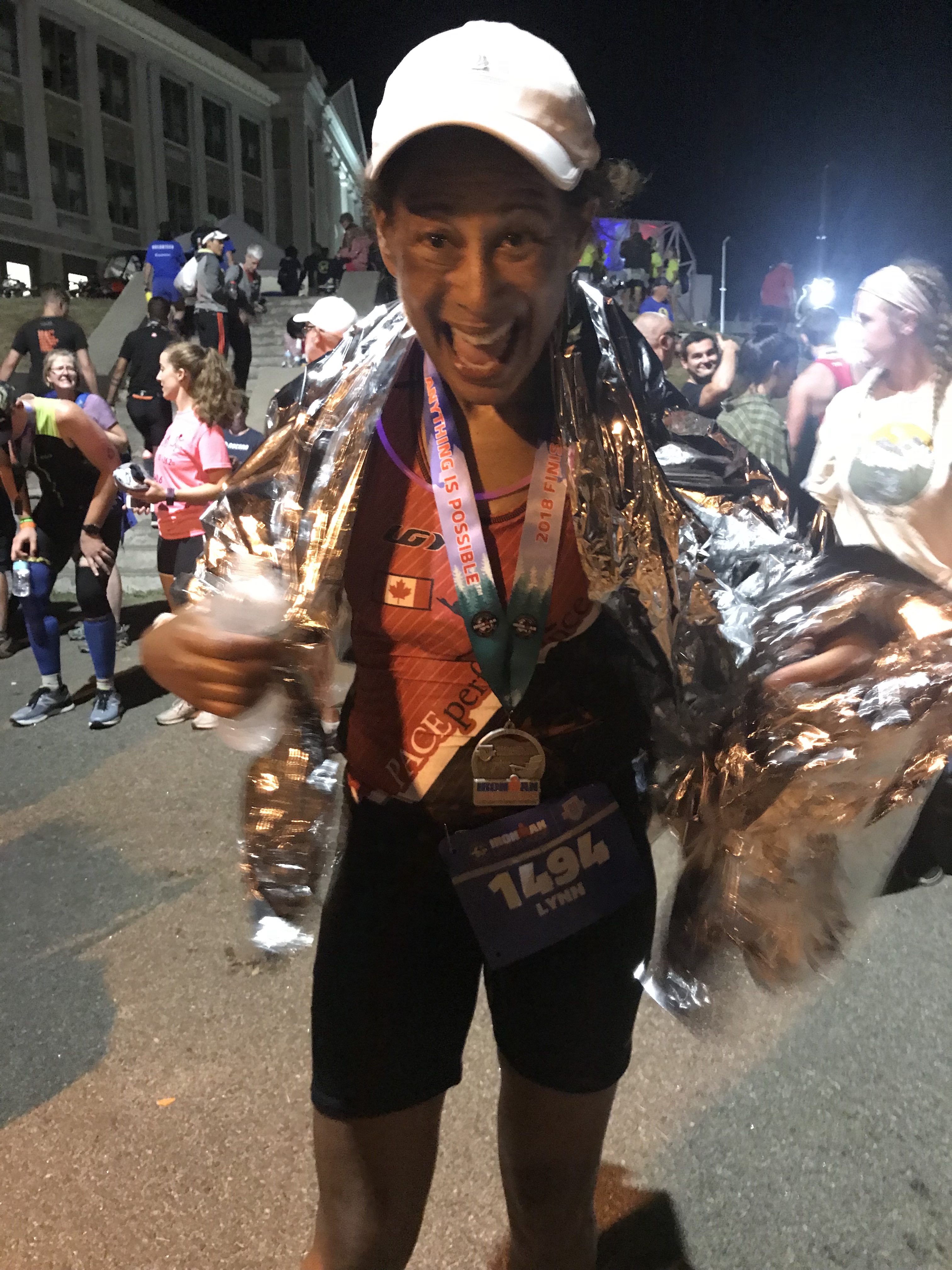 The next morning, I was elated to find out that I had placed fifth in my age group. Even though my body hurt everywhere, I was riding an incredible high. Completing an Ironman is a formidable test, and it was made possible by the inner strength and grit that has grown out of a very deep personal grief. After I was faced with one of life’s most heartbreaking experiences, challenging my mind and body helped me live my life to the fullest.