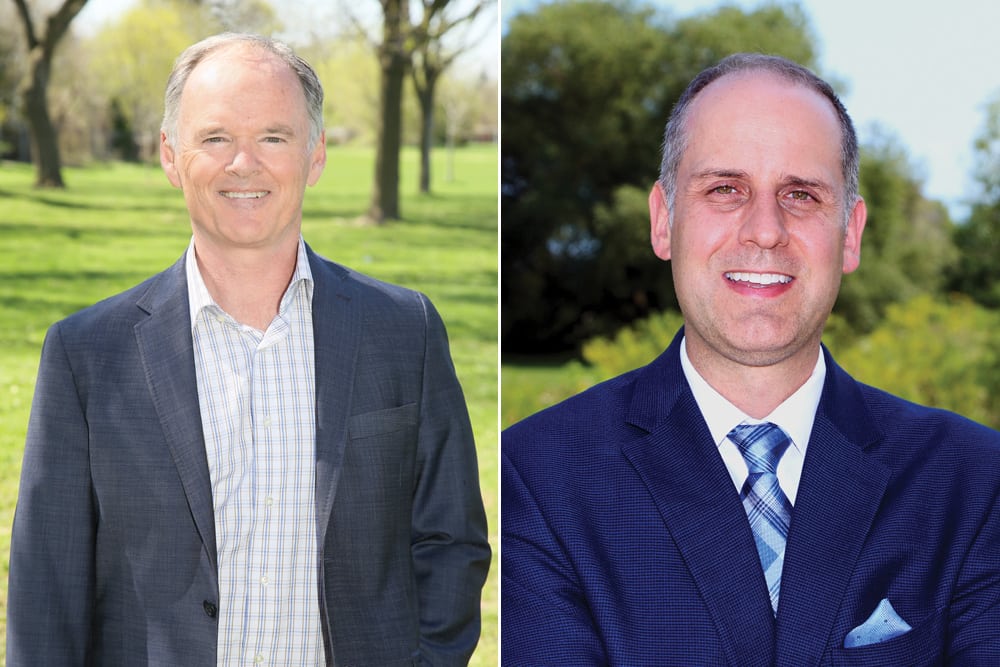 Holyday: I keep calm with a steady hand on the tiller. There’s a job to be done, and despite the pomp and flash of politics, city business must continue. That’s our duty first and foremost.

Campbell: Forgetting people’s names. (Very bad if you are in politics!)

Holyday: Seeking perfection can hold me back sometimes.

Holyday: Plain microwave oatmeal with sliced almonds and Canadian honey mixed in. I wash it down with a Red Rose tea and milk.

Holyday: Our family backyard table on a warm evening, next to the charcoal barbecue.

Holyday: Hidden Order: The Economics of Everyday Life, by David Friedman. I’m still working on it.

Campbell: Reading the Globe and Mail, enjoying decent wines and not necessarily in that order.

Holyday: I used to collect coins, but I gave that up to collect experiences, like watching my kids play baseball and hockey.

Campbell: That I am actually a “liberal with a calculator,” believing in balanced budgets, but also in important strategic investments to make communities more liveable.

Holyday: The politician, councillor, and deputy mayor many see me as in the news is also a regular guy, too. I have a wife, a family, household chores and responsibilities, just like everyone else.

Holyday: It’s a split. I’ve used the subway to travel into downtown Toronto for over two decades. In fact, my city hall parking space has a fine layer of dust on it. But when I’m around Etobicoke it’s my car, or the minivan when hauling kids and groceries.

Campbell: Selling something. But I think I’d be an awesome talk show host—far better than my pal John Tory.

Holyday: Before being elected I had a career in the Ontario Public Service. I was a unit manager at the Ministry of Energy, and I worked with some very talented people. Working in the public sector is interesting, challenging and rewarding. I suspect I would be somewhere in the same field working on an exciting project.

Campbell: A bombastic ideologue who revels in the applause of his followers and occasionally gets it right, but often gets it wrong.

Holyday: A fascinating character who represents our time and place in contemporary politics. Politicians in North America have been very polarizing recently. I think this is a reaction to years of plain and unexciting ones. I’ve watched politics long enough to know that it works in cycles, and the tide will shift once again to a different style—in time.

Holyday: Selfish drivers who either don’t pay attention—or worse, run yellow lights because they are in a hurry.

Campbell: Aside from my two daughters, meeting people who are politically engaged no matter what political stripe. At least they are paying attention.

Holyday: I find true joy in watching my young children grow and achieve life accomplishments. One of my daughters recently won her campaign for class president, just like a chip off the ol’ block!

Campbell: No one really, not even Trump. His day will come.

Holyday: Aggressive drivers and breaking the rules of the road because of a “me first” attitude. Everyone in the city has pressures in life, and we have to go back to putting the interest of others first when sharing the road. I support hitting the people that don’t get this concept right in the pocketbook. Enforcement, increased fines and insurance rates will make it change. It’s simple time and money economics.

Holyday: My wife, of course! We’re busy parents who put heart and soul into our careers. With three growing kids you are lucky to have time to eat, let alone enjoy it.

Campbell: I’m not much for movies.

Holyday: Captain Sully Sullenberger in Sully, because he remained calm in the face of chaos and stayed true to what he believed in, despite what others thought of him or tried to do to discredit his actions. In the end, the truth came out and proved he was a hero.