A night out at TIFF with the Mazda CX-9

A night out at TIFF with the Mazda CX-9

With the current state of affairs, this year’s TIFF was a much-needed opportunity for Torontonians to distract themselves with the power of film. There were over 50 screenings taking place, many of them at local drive-in theatres, letting locals dive into fascinating, heart-wrenching, compelling stories from the world’s best filmmakers.

So, when Mazda approached a group of influential Torontonians to test drive their CX-9 Signature to a 9 p.m. screening of Enemies of the State, they jumped at the chance for an evening of indulgent escapism at its finest. The Sonia Kennebeck documentary follows Matt DeHart, a hacktivist with ties to Anonymous and WikiLeaks, who was indicted on charges of child pornography and spent 21 months in prison. He alleged he was tortured due to sensitive files he had on his computer, and, after being released on bond, his family sought political asylum in Canada, which is where the strange tale picks up.

Here’s what some of the evening’s revellers said about the movie, the CX-9 and their much-needed break from reality:

“The evening started with a personalized automobile drop-off from one of Mazda’s ambassadors. They sanitized every inch of the car outside before letting us know it was ready and providing the lowdown on some of the model’s coolest features—of which there were plenty. The first thing we noticed was how high-end everything seemed. What we learned about Mazda compared to other popular car companies is that since they don’t have an upscale counterpart, they’re able to show off their highest- quality work in every Mazda model, without worrying about keeping certain features exclusive to their fancier brand.

We loved the sleek and sporty exterior, and especially our ride’s colour, a deep crimson that was certainly worthy of the special occasion. Inside, music, navigation and heating were all a breeze to figure out from the intuitive centre-console control system, which is hooked up to a flat-screen between the two front seats. Once we were on the road, a futuristic LED display located exactly at eye level through the front windshield showed us our speed, so we never had to glance down at the dash- board. The engine was so silent that we could barely tell if it was on. 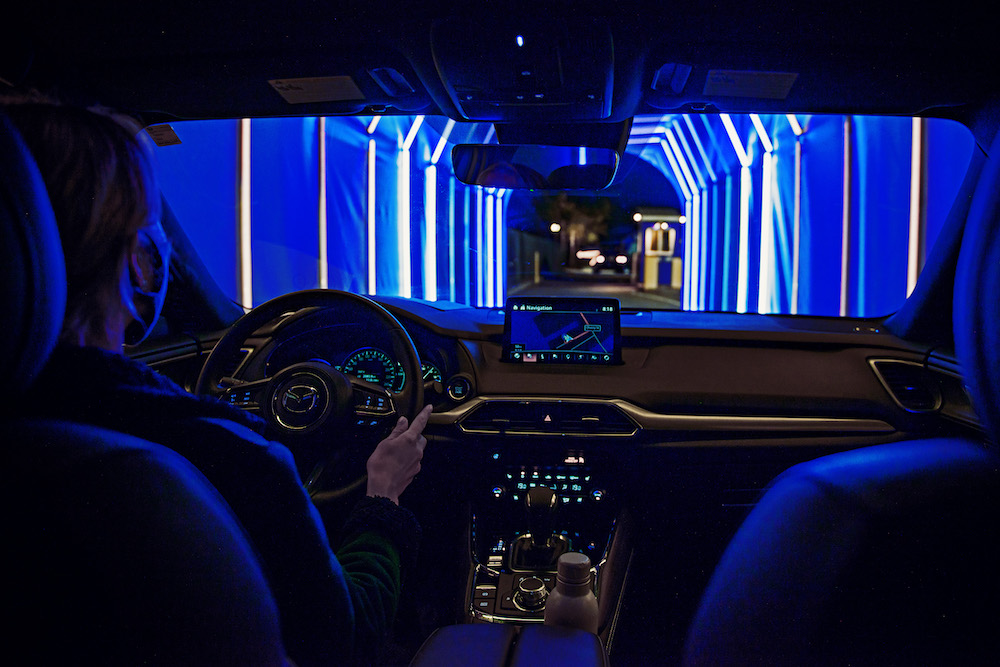 Arriving at TIFF, we drove through the evening’s version of a red carpet, a retro LED-lit tunnel, and were safely ushered to our parking space at the front of the lot—with a spare spot between us and other cars. We snapped photos of the stunning skyline in the background, and opened the trunk—which rises with a mere wave of the foot—to peruse our gift basket. Inside was artisanal popcorn, chocolates, two cozy blankets and other trinkets (like aromatherapy oils and a selfie ring light) to take home. There was also a gift card to order off the drive-in’s menu.

We picked nachos and french fries to snack on, which were delivered to the car by a masked attendant. We turned the radio to the appropriate channel and listened as the film was introduced. Instead of clapping for the film- maker and all the volunteers who made the night possible, the entire parking lot erupted in honking car horns. Even though everyone was sitting enclosed in their own vehicles, it was a moment of collective solidarity.

The documentary itself was layered and complex, with surpris- ing twists and turns, and we sank into the heated seats and stress- munched popcorn for the duration.

At the end, after feeling totally spoiled by our new car and the TIFF and Mazda staff, we drove home to get back to real life. En route, we realized we had gone over three hours without thinking about the pandemic—a major win. When we arrived home, we had gotten so used to our new car that the Mazda ambassador basically had to pry the keys from our hands.”