“Newborns and politicians-in-crisis keep similar hours”: Small business minister Prabmeet Sarkaria on becoming a new dad while trying to save the economy

“Newborns and politicians-in-crisis keep similar hours”: Small business minister Prabmeet Sarkaria on becoming a new dad while trying to save the economy 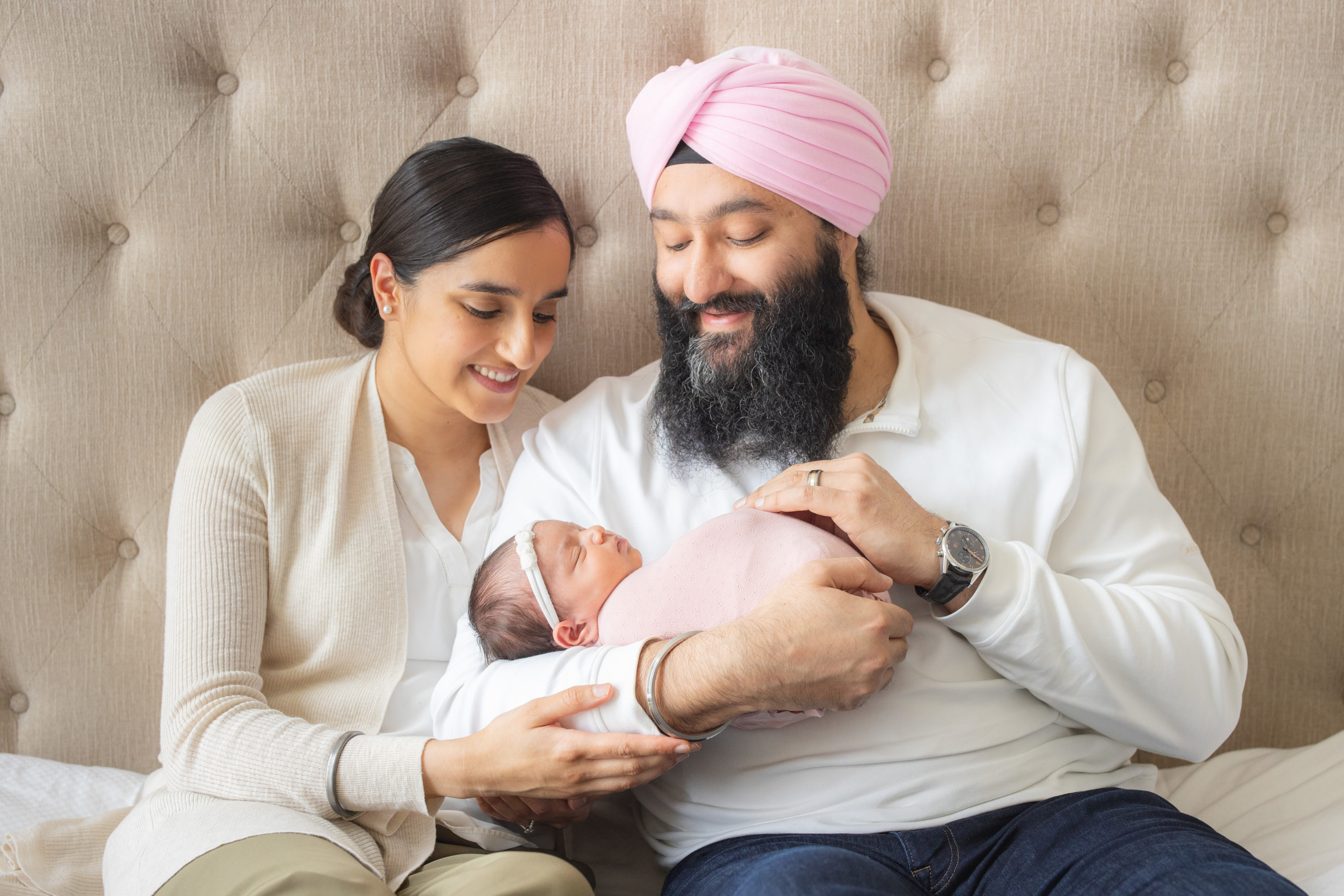 In the middle of the pandemic, Prabmeet Sarkaria, Ontario’s minister of small business, became a first-time father. Ahead of his first Father’s Day, Toronto Life spoke to him about the 32-hour labour, his family’s drive-by baby parade, and trying to save the province’s economy in between diaper changes.

“In September, my wife, Sarpreet, and I found out we were gong to have a baby. We were out playing mini-golf with friends and we were supposed to go for dessert afterward, but Sarpreet was feeling sick to her stomach, so we cut the double-date short. Later that night, I was on a phone call when she came running out of the washroom with a positive pregnancy test. We were both so excited, jumping up and down. This was something we’d been hoping for. We both have busy lives, busy jobs—Sarpreet works for Loblaws as a senior merchandising analyst. But we always wanted to have a baby.

“We were your typical expectant parents, spending hours on Google and YouTube, watching videos about birthing techniques. We decided to hire a doula who would be there in the hospital room, and we agreed we didn’t want to find out the sex in advance. We wanted to save that as a surprise, which seems funny now, because little did we know, a lot of surprises were coming our way.

“Like so many of us, I started working from home in mid-March, which was a big change and a major time-saver. We live in Brampton, so my daily commute to Queen’s Park is time-consuming, and usually I’m also travelling all over the province. During Covid times, I’ve probably done more than 70 virtual roundtables with small-business stakeholders—restaurant owners, manufacturers, main-street businesses—hearing their stories and figuring out what we, as a government, can do to help. There are approximately 420,000 small businesses in Ontario. People, often families, put everything they have into realizing their dream, whether that’s a hardware store or a restaurant. In many cases, they have put all of their savings or even borrowed from loved ones or against their property, so they are particularly vulnerable. It’s not just the business owners: it’s the people they employ, their families.

“It’s something I understand on a personal level. My parents both came to this country 40 years ago from Punjab, India. My mom worked in a factory, lifting boxes, while my dad drove a taxi and also worked in a factory. They did whatever they could to save. When I was a kid, they bought an inn just outside of Orangeville. I grew up working the reservation desk, doing computer tasks, cleaning, yard work. It wasn’t always easy—the drop in travel during SARS almost wiped us out—but my parents were successful, and saw their son grow up to become the first turban-wearing cabinet minister in Ontario. I always knew my parents were proud of me, but becoming a parent myself, I understand it now on an entirely new and profound level.

“The first couple weeks of March were extremely intense as the pandemic ramped up. I attended daily briefings and cabinet meetings as we began to understand the magnitude of what might be coming our way. I remember coming home from work one day and saying, ‘Honey? It looks like we’ll be having our baby in the middle of a global pandemic.’ It was hard to process every piece of new information, as a politician and a leader, but also as an expectant parent. I was in a meeting in the first week of April when we got the Covid modelling. Like everyone in the province, when we first saw the potential of this pandemic in Ontario, my heart stopped. In the worst-case scenario, the peak would coincide almost exactly with our delivery date. I was hearing about the possible affects of Covid on pregnant women and newborns, and in New York they stopped letting husbands and partners go to the hospital for the delivery.

“Sarpreet went into labour around 9:30 a.m. on April 29. We were sitting on the couch watching Netflix’s Michael Jordan documentary The Last Dance—so good!—when her contractions started. She was extremely calm and collected, which is just how she is, and said we didn’t have to go to the hospital just yet. Meanwhile, I was freaking out—running around the house collecting clothes and hand sanitizer. I barely even remember driving to the hospital. After an initial examination they told us that it was probably going to take a while, and they weren’t kidding: Sarpreet was in labour for 32 hours. Under normal circumstances they probably would have told us to go home for a while, but with Covid, they didn’t want us going back and forth, so we had a lot of time to kill.

“We spent hours walking around, talking about how this would be the last time it was going to be just the two of us, and how weird it was to be in the hospital during a pandemic. Other than the maternity ward and the Covid, unit, the hospital was a ghost town. All of the restaurants were closed down other than the Timmy’s—I think I had four meals from there. During the birth, everyone was in masks, and I was still the guy reapplying hand sanitizer every two minutes. I would say the time flew by, but Sarpreet was the one who was in labour, so she may have a different recollection.

“All I can say is the second my daughter was born, it was like I was a completely different person. I know that every new parent feels that way, but it doesn’t become any less true when it happens to you. I looked at this tiny, perfect person and felt an overwhelming sense of wanting to do everything I could to make sure she grew up in a better world. As a cabinet minister, that is already a responsibility I take extremely seriously. It’s where I’ve dedicated my life. But this was different.

“The hardest part of all this has been staying away from my family and friends—especially my 90-year-old grandmother, who hugged me for a full five minutes all those months ago when she found out I was going to be a dad. We have tried to do some video chats with her, but I think it just makes her feel sad. I can’t wait for the day she can actually meet her great-granddaughter. The rest of my family has been amazing. The day we got home from the hospital, my sister had decorated our front porch with streamers and balloons and an ‘It’s A Girl’ banner. The next day, my entire family—my parents, siblings, cousins—did a drive-by welcome parade where they were all honking and cheering and holding up signs that said ‘Welcome Baby Sarkaria.’ At the time, we still hadn’t figured out a name.

“In the Sikh faith, there is a tradition about naming babies where you open our holy scripture, the Guru Granth Sahib, to a random Ang, or page, and the first letter of the first hymn on that page will be the first letter of the baby’s name. Normally this ceremony would take place at a place of worship, overseen by a head priest. Instead, we had our priest, who is also a friend, on video conference. We got ‘D’—it wasn’t one of the letters we had brainstormed, so we were basically starting from scratch. We did a lot of research and found out about Mata Sahib Deva Kaur, who was a fearless warrior and pioneer in the 17th and 18th centuries, and from there we landed on ‘Deyva.’ A name that conveys courage and fortitude felt right for the moment.

“I don’t want to say that anything about this time has been positive, but it’s been really special for both of us to be at home during this time. I had planned to take a few days off before going back to work and beginning to travel around the province again. Now I’m doing everything—the soothing, the changing, the poop monitoring. I think I could be a professional baby photographer at this point with all of the photos I have taken. Work has never been busier, but I’m finding 10 minutes between phone meetings to go and peek at her in the crib. The nice part is that newborns and politicians-in-crisis keep similar hours. I’ll be on the phone with Premier Ford at 7 a.m., or the finance minister at 1 a.m., and Deyva is there with me. She has already attended her first caucus meeting. I don’t want to get ahead of myself, but I’d be lying if I said I haven’t dreamed of the day when she is prime minister. I know—such a dad. 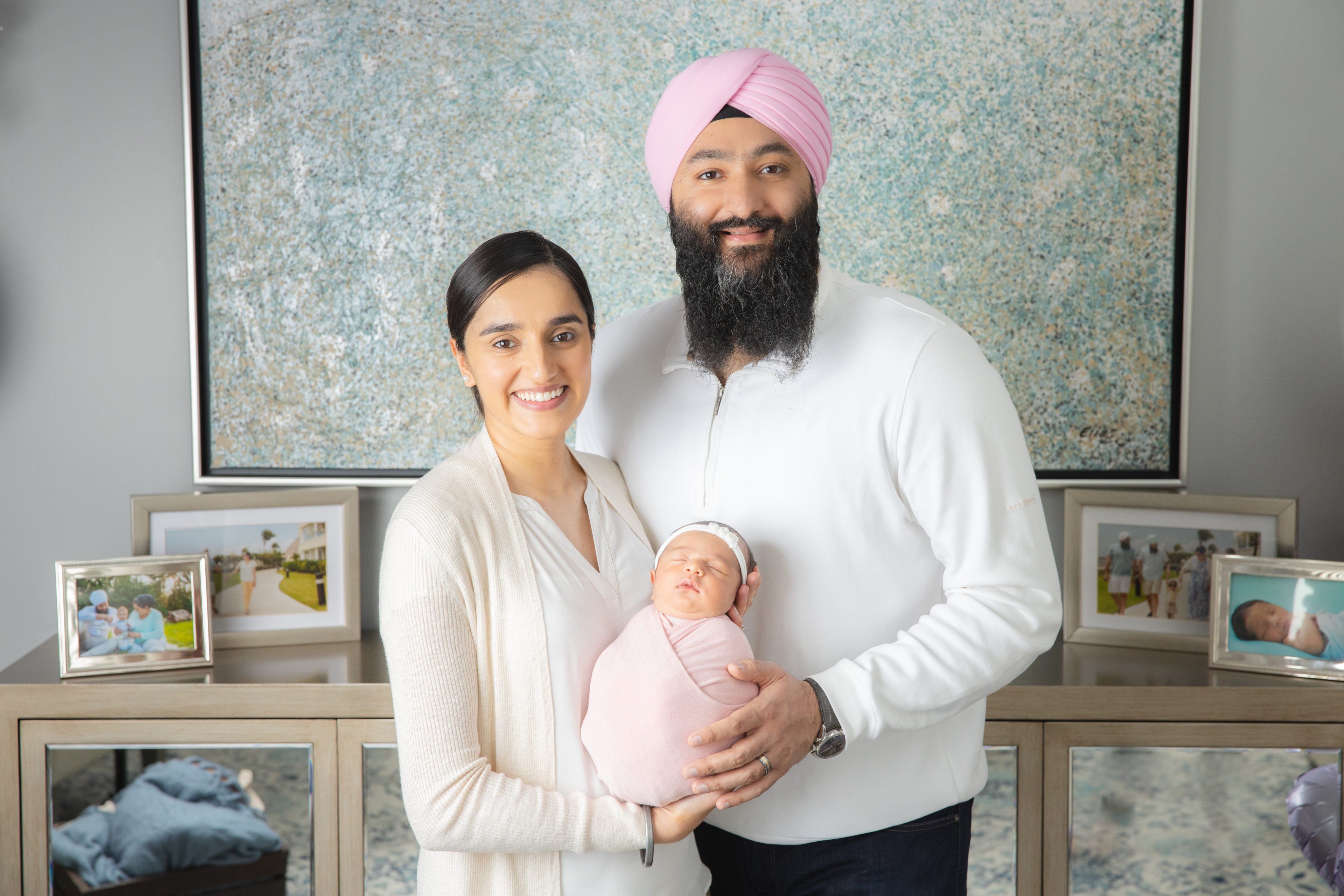 “Premier Ford has been great. My first day back at work, he gave me a ‘new dad’ shout out at the daily press conference. He has four daughters at home, and he always jokes that he loses more votes around the dinner table than he does at Queen’s Park. We have clipped some newspaper articles to show Deyva what was going on in the world when she was born. And we started an email account for her so that family and friends who can’t come to visit us can send messages. I wrote one the other day that said, ‘Dear Deyva, you are being born in a pandemic and you have no idea…’ It’s strange to think how her little world is still exactly the same.”