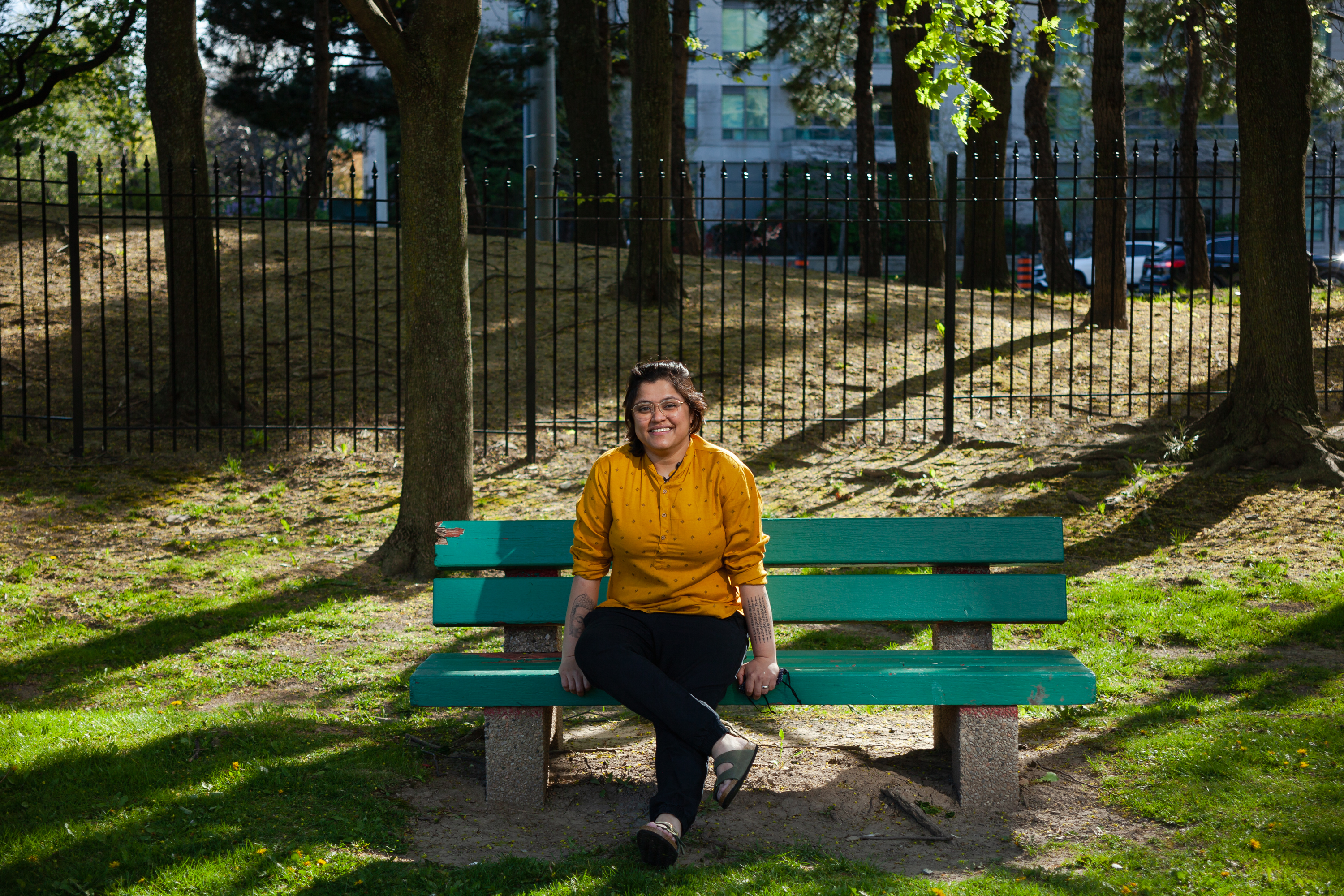 When Tanaya Chatterjee found out that her father had tested positive for Covid, the first thing she wanted to do was jump on a plane—then she found out her mom and sister had it too. As a psychologist working with Toronto’s South Asian community, she has spent the last several weeks helping her clients process their fear, grief and guilt following India’s tragic second wave. On a personal level, she’s just trying to get through the day without checking her phone five times a minute. Here, she talks managing fear from 7,000 miles away and why Netflix, barbecue chicken and diving into work have helped her cope.

“I specialize in what’s called culturally adapted psychotherapy, which means adapting the Eurocentric therapeutic model for different societies and norms. My client roster includes a lot of people from Toronto’s South Asian community—people from India, Pakistan, Bangladesh, Sri Lanka. I did my undergrad in psychology at the University of Calcutta and moved to Canada in 2013 because I thought I could get a better postgraduate education here. I’m also a member of the LGBTQ community, and I felt like I could live with a greater sense of openness and acceptance in Canada.

“I did my doctorate at Memorial University in Newfoundland and chose Toronto for my one-year residency because I felt like my specialization—PTSD and psychotherapy for racialized communities—would be put to good use here. I met my wife while I was still out east. I was surfing online to get a sense of the dating scene, and we matched. Marie is also an immigrant—she came here from Trinidad when she was four years old. Through her, I have gained a wonderful adopted family, but that doesn’t change how much I miss my own family and how hard it has been to be separated over the last year.

“My parents live in a suburb outside of Calcutta, in the same house where I grew up. My sister, who’s six years younger, was living in Bengaluru for work, but moved home last year. Of course, I’m very grateful she was able to do this, but it also makes me feel guilty. My parents have two daughters, and I am supposed to have the obligations of the “eldest son,” as my father would put it. A lot of these patriarchal traditions don’t sit well with me, but at the same time my culture is extremely important to me. As I tell my clients, it’s about finding that balance. I am a proud Hindu. But I am also a big meat eater—if you find a vegetable on my plate, it probably got there by accident. That’s not something I mention to my parents when we’re catching up on a Zoom call.

“Pretty much from the moment Covid started, I had this overwhelming sense of dread. Even earlier this year, when people were talking about India’s low case counts as a “ray of hope,” I just felt like, Really? Or is it just a matter of time? It got worse as we went through the second and then the third wave here in Ontario. I was always thinking about the population density and poverty at home. I’d be on Facebook seeing pictures of the mass gatherings and religious celebrations—thousands of people, all maskless. It felt like a tinderbox waiting for a match. When the crisis started last month, a few of my clients and friends were able to go home to take care of their family members. I was happy for them, and also envious. My registration is through the College of Psychologists of Ontario, so I have to physically be here, even if I’m seeing clients on a screen.

“One day in April, my wife and I were out on a walk when my sister called. Right away I could tell that something had happened. Just the way she said, “How are you?” Then she told me my dad had tested positive for Covid. I froze—it was that moment where your blood feels like ice, like you’re about to collapse.

“I was terrified, but I wasn’t surprised. We are a middle-class family—my mother and father are both educated and we own our home, but we don’t own a vehicle. My dad runs a small printing business and had to go to work, which meant taking public transit on vehicles that pack in hundreds of people—if you think the King streetcar is crowded, this is something else. We’re pretty sure that’s where he got it. One day he felt feverish, the next day it was bad diarrhea and some shortness of breath. Our family doctor was able to do a phone consultation, and he said my dad needed to get to the hospital right away. He explained that things could get worse with very little notice, and at that point, it could be too late. The whole world has heard about the overcrowding: people dying in gurneys in hallways, in parking lots outside the hospital, even in their homes.

“My sister went to six hospitals before she was able to find him a spot—everywhere they went, the hallways were filled with people waiting to be admitted, some of them gasping for air. They had to settle for a bed in a public hospital. The medical care isn’t very different, but the conditions are a lot less pleasant: less equipment, fewer staff, and my dad’s room was more of a dormitory, with seven other people.

“The day after I found out about my dad’s diagnosis, I took a day off. I needed time to process. But then every time I let my mind run, I would imagine the very worst. I spent that day doing the things that help me feel calm and happy: I love to paint, and I have so many plants that my wife calls me an “old plant lady.” She brought me home Portuguese chicken—my go-to comfort food. We’ve been trying not to obsess over the news or what’s happening on Twitter, and binging on Netflix and Amazon instead. We just finished The Serpent and now I’m into Younger, which is light and fun and exactly what I need.

“Many of my clients are coping with similar hardships, or worse. I saw someone last week who was terrified because his elderly father back home is insisting on going to the bazaar for groceries. Online shopping is not a thing in India, or at least not in my community. Like me, he was feeling the frustration of being powerless in the face of so much tragedy.

“A lot of my clients come in with so much anger—about the bureaucracy and the inequity that has left India in such devastating circumstances. They have every reason to feel that way, but the thing about anger is that it allows you to stay at a distance from other emotions like sadness, pain, fear. In our culture there can be a feeling that taking the time to feel your emotions is self-indulgent, especially at a time when loved ones are experiencing life-and-death devastation. I emphasize the idea that when you’re taking care of yourself, you’re depositing credits into your emotional bank account, which you can then share with those in need.

“My ability to relate to my clients has been a real asset. They ask about my family, and I tell them exactly what’s happening. Sometimes I will share details, but often we end up in these moments of therapeutic silence where we sit and understand each other’s pain without saying a word. In some ways, I think that is the most impactful thing I can do.

“Being so removed and so powerless is the hardest part, so work has been a real blessing in that sense. Also, if I wasn’t seeing clients, I would just be checking my phone every 15 seconds. My sister and I came up with a system where I check in once a day for updates. If they call me and I don’t pick up because I’m with a client, they know to text to say everything is okay. Of course I would like an update every hour, but I don’t want to be another burden for my mom and my sister, who are already dealing with so much. Ten days after my dad checked in to the hospital, they both tested positive as well. Again, not a surprise, but now my worry is that much greater. Right now they are both isolating at home and doing okay, but if things get worse I worry about who will take care of them.

“I try to focus on the positive. My dad was discharged after 13 days of hospital care—partly because his condition improved, and partly because they needed his bed for people who were in worse shape. Of course I am terrified that things could change overnight and the next phone call I get will be about someone dying in their sleep. My sister told me the other day that she had tracked down a couple of tanks of oxygen on the black market; they are sitting in her bedroom. She was telling me because she thought it would relieve me and also as a kind of dark humour—we have to pay for air to breathe. I got off the phone and cried for an hour.

“I know our extended family and community have been checking in and dropping off food. I grew up in the kind of place where there is no such thing as privacy between neighbours. Everybody knows about everyone else’s business. That always irritated me in the past, but now I see the other side of the coin: that sense of collectivism. It’s something we’ve seen here in Canada in the last year—people buying groceries for each other, organizations like Caremongers. In India, it didn’t take a global health crisis. This is just the way we are. People willing to give so much even if they have very little.

“It’s something to keep in mind when we’re feeling annoyed about not being able to sit on patios or play sports, or when we’re wondering when the borders will relax so we can go on vacation. Over the last few weeks, Canadians have been obsessed over which vaccine we’re going to get—which free vaccine! At home, they have to pay for any vaccine. It costs up to a week’s or even a month’s salary for a farmer. It is outrageous, and exactly what we mean when we say that Covid hasn’t invented new inequalities so much as it has highlighted existing ones. I am hopeful that in the longer term, we will emerge from this crisis in a better world. For now though, my entire world feels like three people.”